Throughout fall camp Brian Kelly talked about how this was the most balanced passing attack he has worked with during his tenure at Notre Dame. While previous editions of the Irish offense relied heavily on superstars such as Tyler Eifert and Michael Floyd, the 2013 edition was rumoured rumored to have multiple receiving weapons to challenge defenses. This week, we'll take a look at that balance in the OFD film room. Although I'm not always a fan of the myriad of different cameras used to cover games on television, NBC provides us with a pretty cool angle on the first touchdown. We get to see the play unfold from the perspective of Tommy Rees. Let's get to the film room and breakdown some game footage! 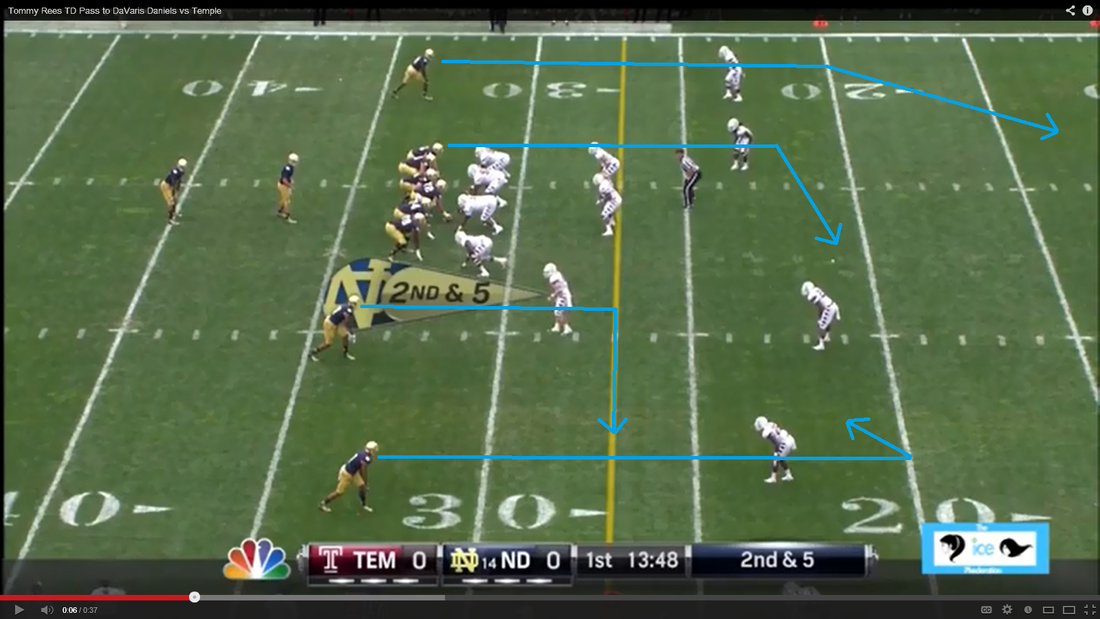 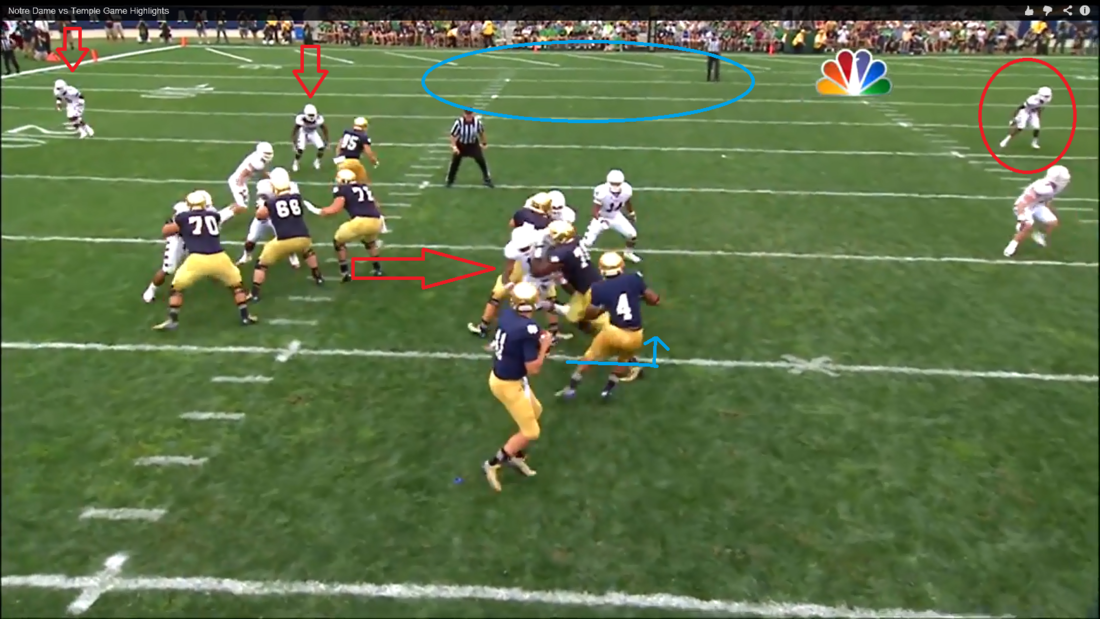 After a good play action fake, the linebackers have stepped up to play run, leaving a nice passing lane behind them. Temple is playing man coverage. The two defensive backs highlighted with red arrows are responsible for covering DaVaris Daniels and Troy Niklas. Pre-snap, the circled safety appeared to be responsible for Daniel Smith in man to man coverage. However, when Smith runs the out, the safety jumps the curl route by Jones. This is likely an automatic adjustment to the route combination Notre Dame uses. With the safety preoccupied with Jones, the middle of the field is wide open.

For this play to be successful, Rees will have to demonstrate his new found escapablity. Temple defensive end Sean Daniels (# 1) is able to get some penetration with an inside move. Rees needs to slide to his right and step up to make the throw. 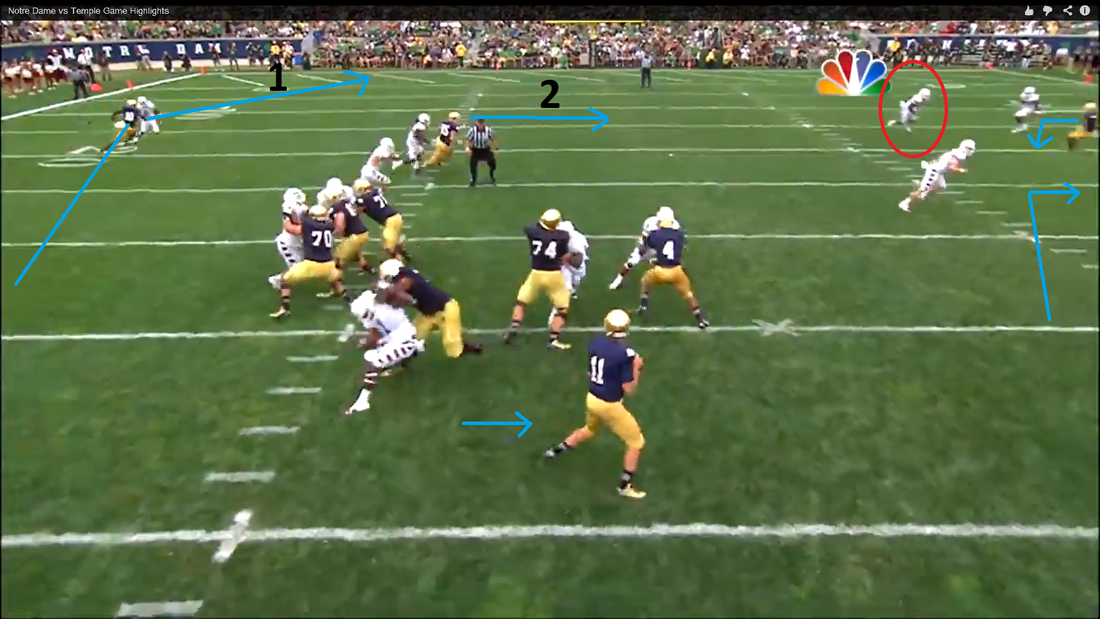 Rees was able to slide away from pressure and Ronnie Stanley (# 78) is now back to his rightful place atop the food chain mauling the Temple defensive end. Since this is man coverage the route combinations determine that Rees will start his read progression on the left side of the formation. Generally speaking quarterbacks are taught to read deep to short (there are exceptions to this, but that is the general rule). Therefore, DaVaris Daniels running the post is the first read. If he isn't open (or if the safety stays deep in the middle of the field) Rees would go to his second read, Troy Niklas on the crosser. With the safety vacating the middle and jumping the curl by TJ Jones, there is no need to go to the second read. Rees makes the correct decision and attacks the single coverage on the outside.

As an aside let's talk a little bit about how this play is designed. The route combinations were created to beat either man or zone coverage. If the quarterback sees man coverage he is going to look to the left initially and follow his progression as documented above. If the quarterback sees zone coverage he will begin his progression on the right side. The route combination on the left side was created to be pretty good against man coverage (especially cover 1 and cover 0) and the combination on the right side was created to be pretty good against zone coverage. Regardless of the type of zone (e.g. cover 2 or cover 3) the read on the zone side likely starts with TJ Jones. For example, against cover 2 zone Rees would read how the corner reacts to TJ Jones. If the corner gets depth, Rees would come back underneath and throw the out pattern to the slot. If the corner stays home and covers the out, Rees can throw to Jones. If the corner bails with Jones and the linebacker covers the out, Rees can come back and hit Niklas on the crosser. These route combinations are designed to put zone defenders in a situation where they have two players threatening their zone, forcing them to make a decision, which will always be wrong. Designing pass plays so you have one side to beat man coverage and one side to beat zone coverage is actually pretty common. It's an excellent way to simplify reads for the quarterback and makes the play effective against a variety of common coverages. 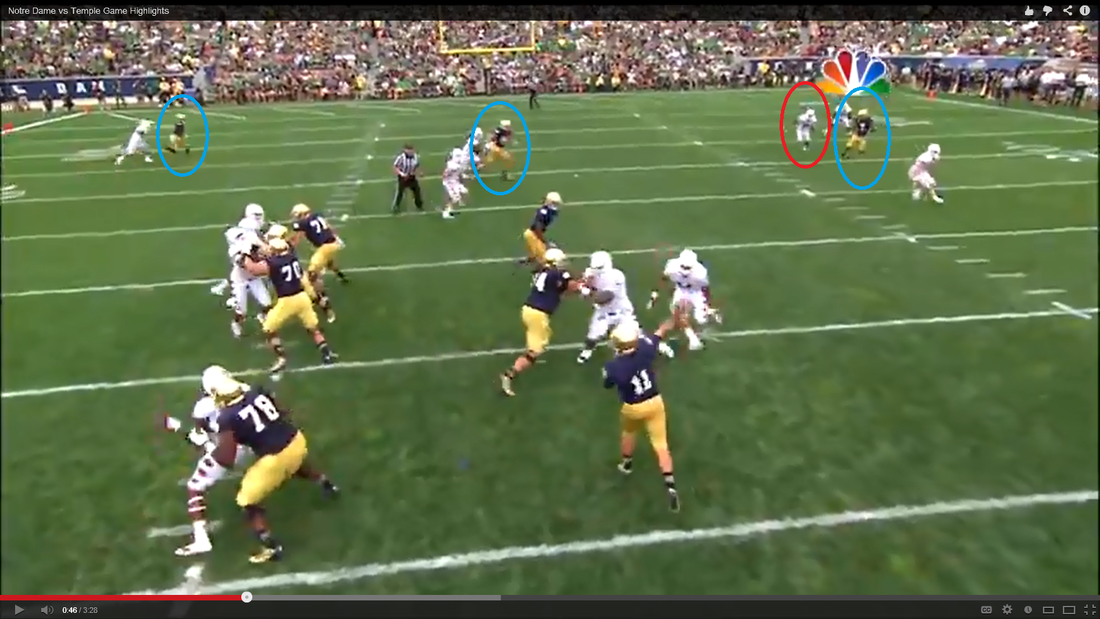 Before I got off on a tangent about quarterback reads and progressions, this article was about balance in the Notre Dame passing attack. This screen shot illustrates exactly that. Temple is trying to play man coverage. When the safety (red circle) jumped the curl route Temple basically double covered TJ Jones. In the past, this was a good strategy to employ against the Irish. Teams would pay extra attention to Michael Floyd in 2011 or Tyler Eifert in 2012. This strategy doesn't work as well in 2013. When you double TJ Jones you leave DaVaris Daniels one on one with a corner or Troy Niklas one on one with a safety. Both of those match-ups favour favor the Irish. Notre Dame has three receivers on the field who present significant challenges in man to man coverage. This is what Brian Kelly meant when he referred to balance in the passing game. As Temple found out in the first 5 minutes this balance makes life difficult for the defense.

It's evident early in the 2013 season that Notre Dame has a multitude of weapons in the passing game. More importantly, Rees showed enough arm strength to take advantage of these weapons. Now imagine the problems it will create with Daniels, Jones, Niklas and Chris Brown on the field at the same time. That would look pretty good in the big house I think.