What does George Atkinson III need to do to fulfill his potential as a running back?

At 6'1 , 220 pounds, with sprinter's speed, George Atkinson III is arguably the most gifted athlete on the Notre Dame roster. So far, this rare combination of size and speed has yielded mixed results for the junior running back. Flashes of brilliance have been separated by stretches of inconsistency and tentative play. It's been said that hope springs eternal, however in the college football world hope has a shelf life. If Atkinson is to fulfill his massive potential he needs to find his identity as a running back. Is he a powerful runner that punishes would be tacklers or the type of back that makes people miss in the open field? Not surprisingly, we here at OFD have some pretty strong opinions on this topic and have written about them here and here. Let's take a final look at the film before the 2013 season and help GA III find his identity. 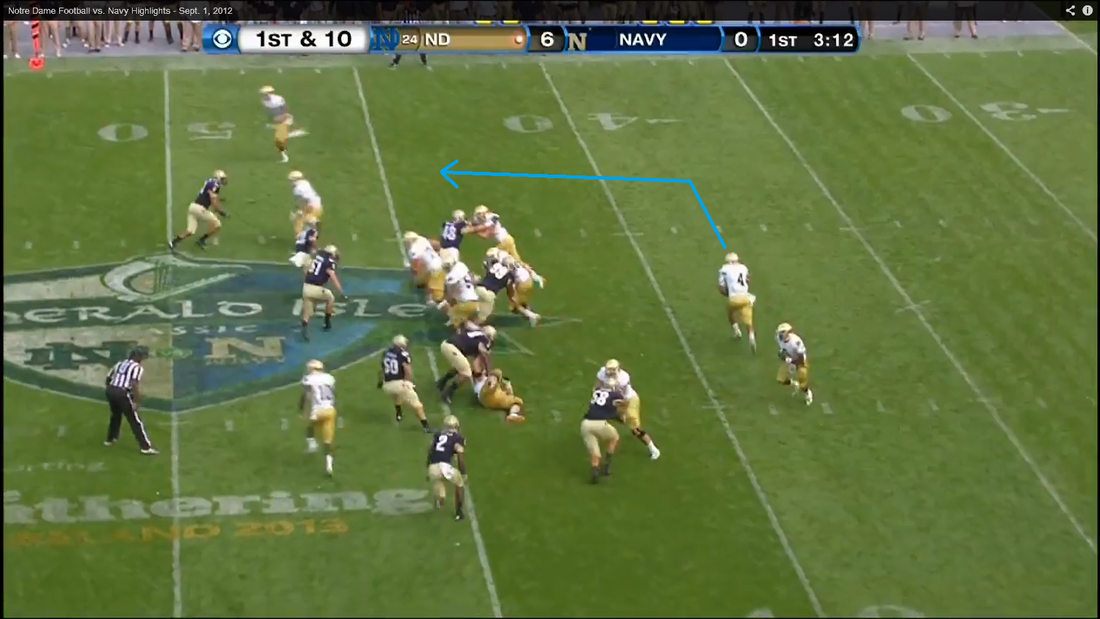 This is a sweep that will follow the blue arrow. Atkinson excels in this type of play. He is fast enough to out run defenders to the corner and when he turns up field and accelerates, he is a scary human being to try and tackle. 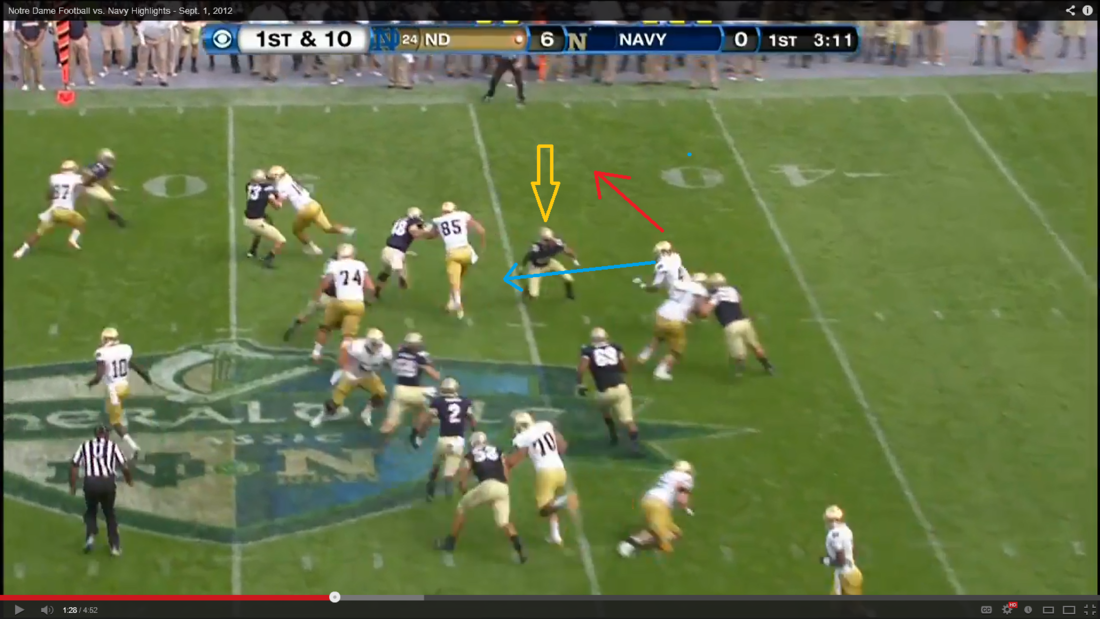 Atkinson has turned the corner and now has a decision to make. He can head straight up field (following the blue arrow) and use his speed to beat the unblocked defender or try to make a cut and beat him to the outside (red arrow). 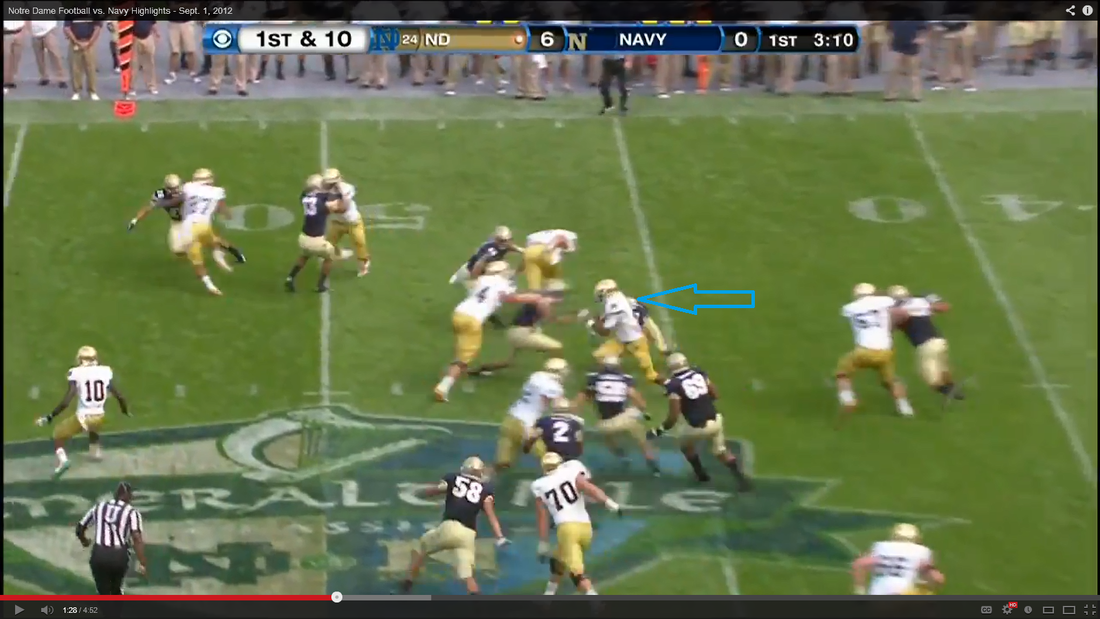 This is what a 220 pound back with blazing speed should look like when he turns the corner. Would you want to get in the way of this guy? GA III made the right decision. He turned the corner, got his shoulder pads north and south and put on the afterburners. He didn't try to make a fancy cut, he just exploded.

Making Trying to make people miss in the open field 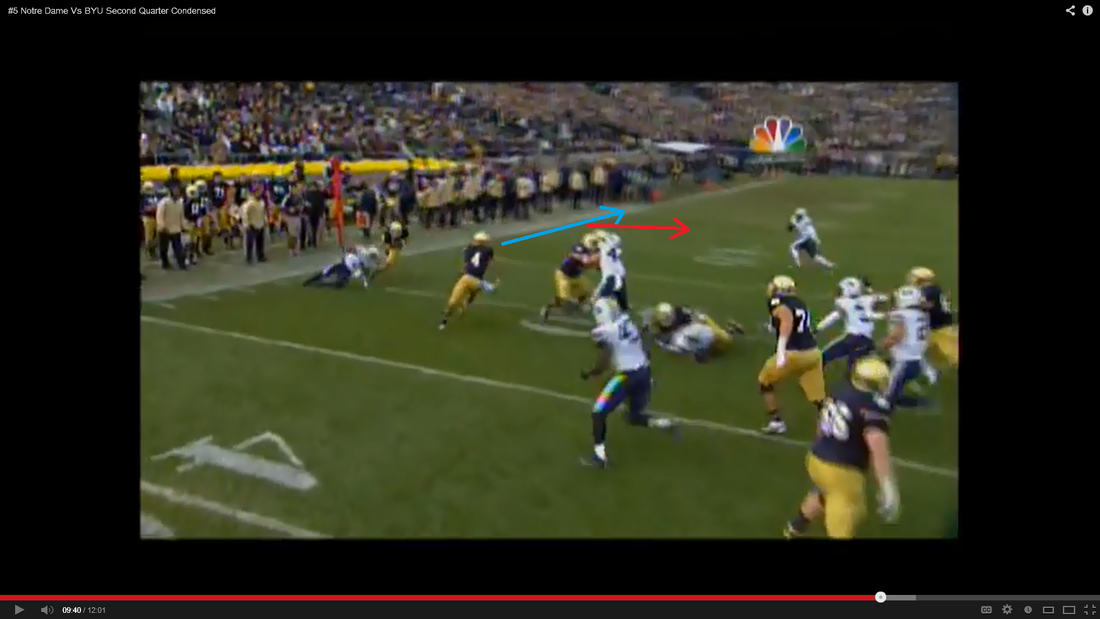 Atkinson has turned the corner on another sweep, this time against BYU. He has one defender to beat and once again has a choice. Follow the blue arrow and leverage his size and speed or channel his inner Theo Riddick and try to make a cut inside. 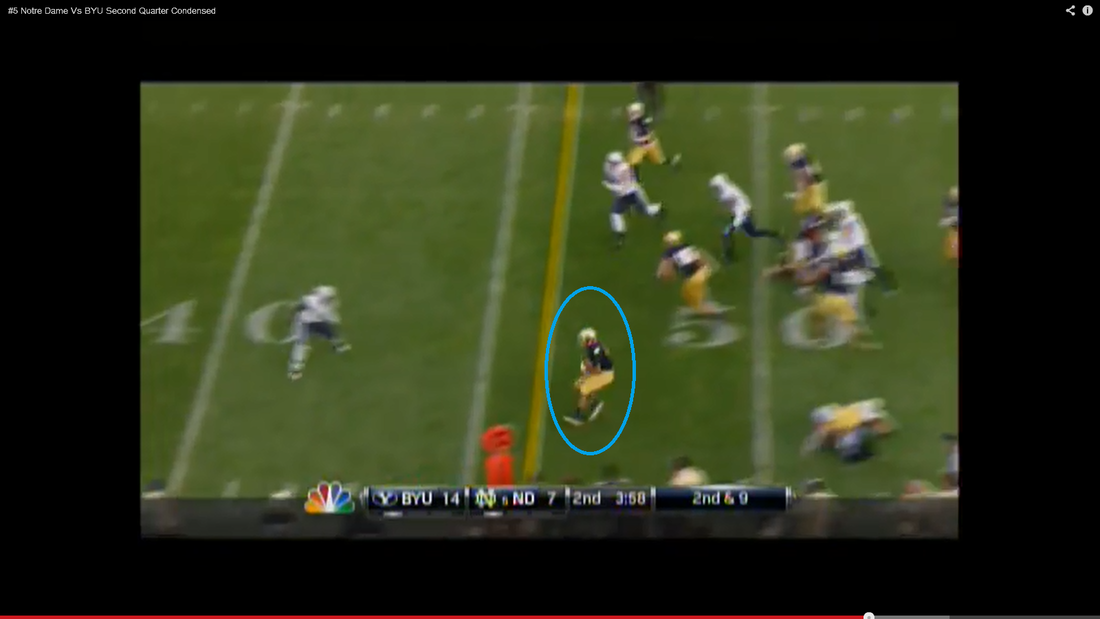 As Eric so aptly described, instead of using his speed, GA III decides to bust out his patented stop and shove move. As you can see, to execute a move this devastating and cunning, Atkinson must decelerate long before he gets close to the defender. Slowing down to make a move seems like a curious choice for a back with a freakish combination of size and speed, but before we judge, let's see what happens.

The stop and shove fooled no one. Atkinson made the wrong choice. He should have accelerated and followed the blue arrow in the first screen shot. Regardless (or irregardless for those of you in the redundancy department of redundancy) he likely would have been tackled no matter which path he took. However, the advantage to following the blue arrow is that when he's accelerating Atkinson is a load to tackle. This wears defensive backs down and increases the chance of a big play as the game progresses. When GA III uses the stop and shove the only people he wears down are Notre Dame fans. 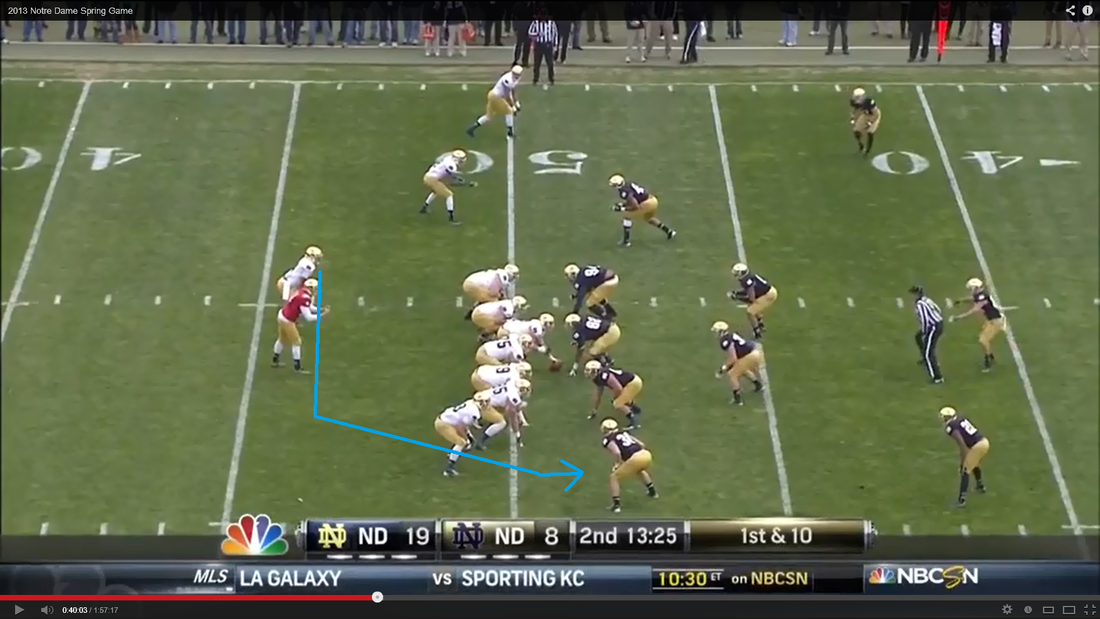 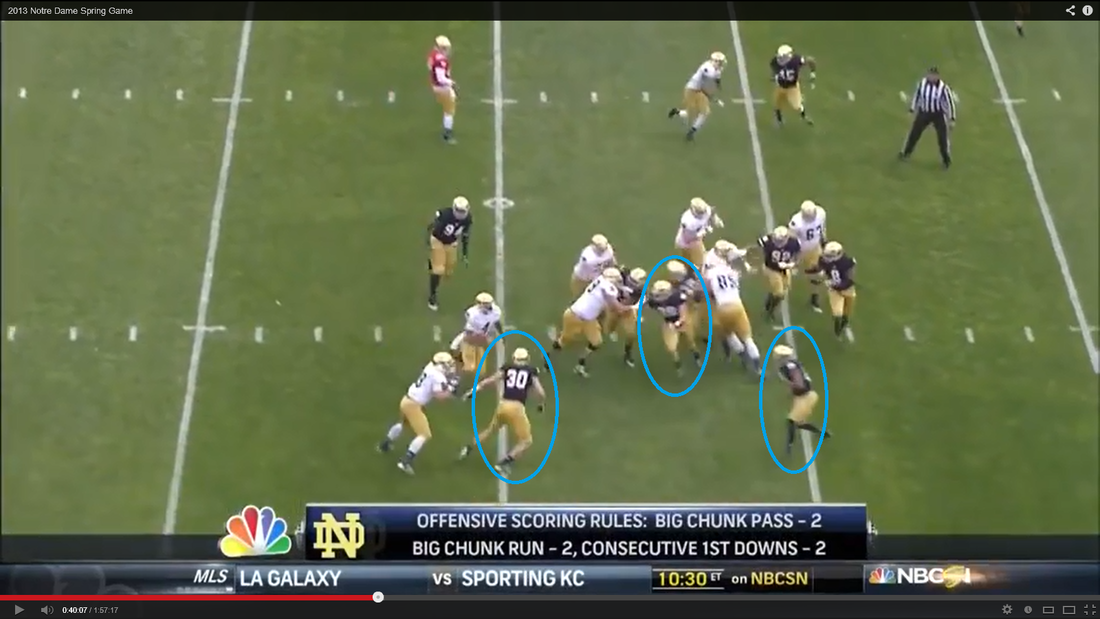 The blocking on this play isn't great, consequently three defenders are in excellent position to make a tackle. If GA III decelerates and gets fancy he's going to get rocked. If he accelerates and uses his size and speed, we're going to have some good old fashioned foraging and mauling. 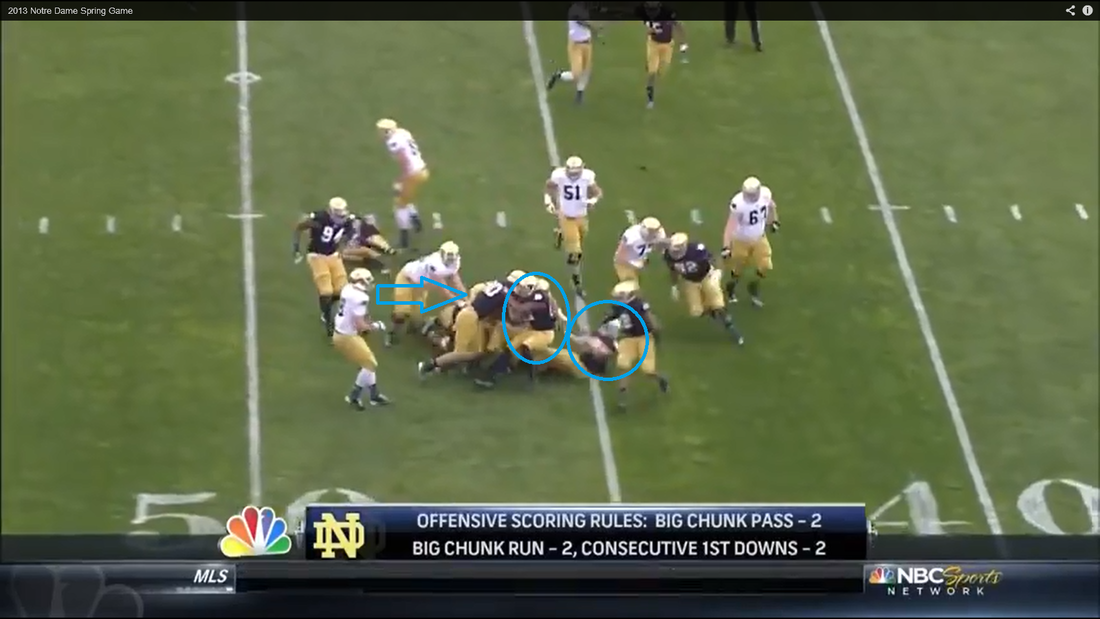 BOOM! This is what it should look like when a 220 pound running back with excellent speed runs hard. Defenders go flying like bowling pins. The first defender to step in front of Atkinson (# 4) is linebacker Joe Schmidt # 38 (blue circle). He's on his back. The second defender Jalen Brown # 21 (blue circle) looks like a rodeo clown stuck on the horns of a bull. He's also about to go for a ride. Finally, 250 pound linebacker Ben Councell # 30 (blue arrow) gets dragged for a few yards trying to bring Atkinson down. This play didn't make the highlights from the blue and gold game and likely wasn't noticed by most fans. Yet it holds the key to solving the riddle that is GA III. This is how he needs to run. This is his identity. He must use his size and speed to challenge defenders to try and tackle him and punish them when they do.

Seems pretty easy right? Run hard, don't make so many cuts, it's not rocket science. So why doesn't Atkinson consistently run like the last example?

This is a phenomenon I've seen with many of the running backs I've worked with over the years. As strange as it sounds, part of the problem is that Atkinson has fallen victim to the success he had in high school and early in his career at Notre Dame. As a freshman Atkinson returned two kicks for touchdowns, this big play ability carried into the 2012 opener where he scored on a long run. When you have a running back who dominated at high school and has early success at the college level he sometimes starts to think that every carry is going to be a touchdown. Even worse, he comes to believe that's what is expected of him. Brian Kelly talks about unconscious incompetence with young players. The idea that many freshmen don't know how little they know. In some cases this allows them to play a very simple game that can be highly effective. They don't think, they just play. In 2011 GA III played that way, he just ran. 2012 started like that for Atkinson, however as the year progressed it looked as though his brain started to get in the way. Instead of running hard and simple he started to think about running for touchdowns. Thus, the stop and shove was born.

George Atkinson III needs to simplify his game. He doesn't cut particularly well, so he should cut less and use his speed more. We'll get a sense of whether or not GA III has found, and embraced his identity when we play Temple and especially Michigan. Pay close attention to how he runs in traffic. If he is accelerating and punishing tacklers, he's embracing his identity. If he is decelerating and looking to make a cut..... his identity will be another guy on the sidelines watching Greg Bryant.