Part two of our look at Zack Martin.

Last week we took a look at Zack Martin's run blocking. This week we'll take a look at his pass blocking. After watching him pass block I'm even more convinced he is one of the best players in the country. Let's breakdown the film and you can make your own determination. 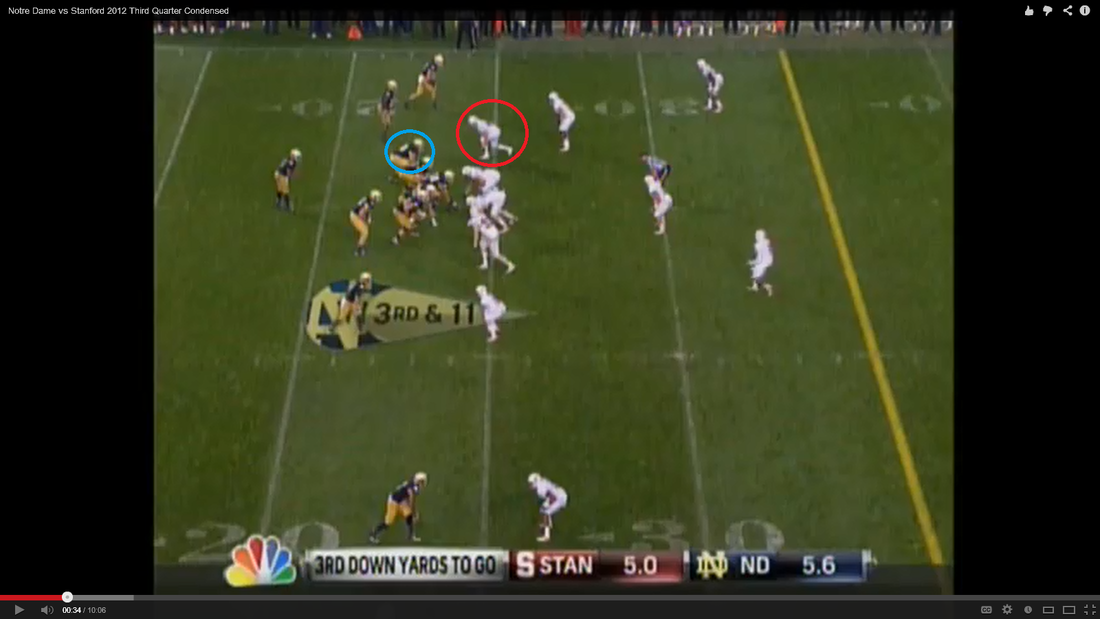 No, this grainy footage is not a screen shot of a Yeti fighting a Sasquatch. Actually it's better. This is Zack Martin #70 (blue circle) and Chase Thomas # 44 (red circle) about to go mano-a-mano in an obvious passing situation. All day Chase Thomas has been in the Notre Dame backfield wreaking havoc. Now he's going one on one with Zack Martin. Battle of the titans. 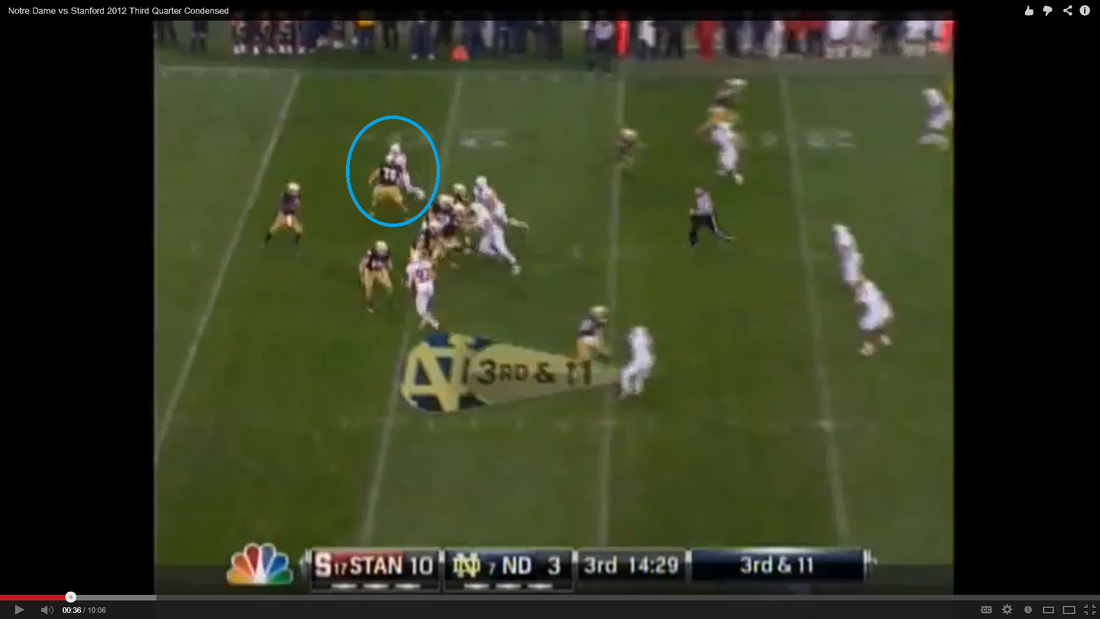 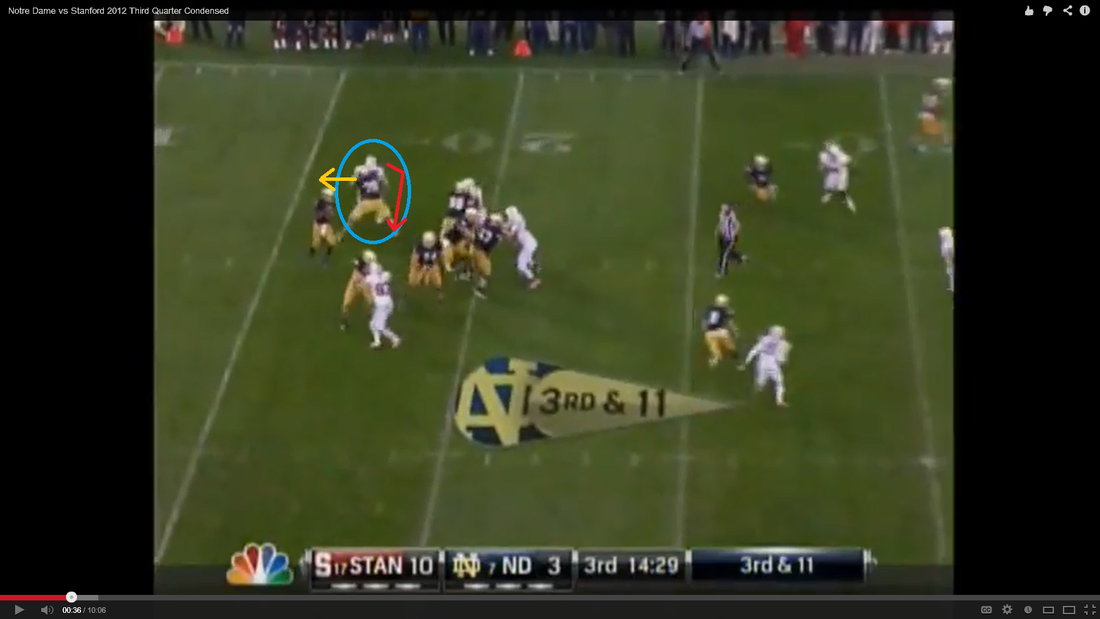 With the attempted speed rush thwarted, Thomas turns to a trusted companion of the speed rush, the spin move. It's hard to see, but in this screen shot Thomas actually is in the middle of completing his spin and has his back towards Martin. Reacting to a spin move is a very difficult task for any offensive tackle. At the start of the play the tackle has to move as quickly as possible in the direction of the yellow arrow so he doesn't get beat by the speed rush. Then in a split second he has to stop his momentum (no easy task when you are over 300 lbs) and slide back to the inside to defeat the spin. Thomas wants to spin and follow the red arrow to the QB with the idea that Martin won't be able to react in time and will continue on the path of the yellow arrow. 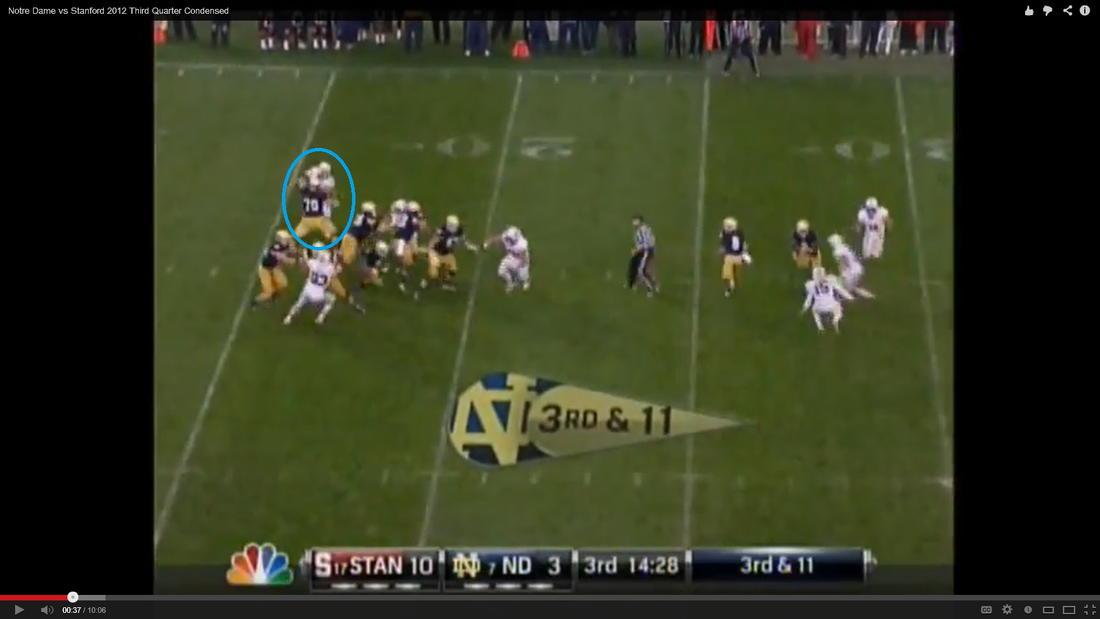 Checkmate. Martin slides back inside and stonewalls Thomas. This one wasn't even close.

It's even better to watch at full speed, Martin makes it look pretty easy. 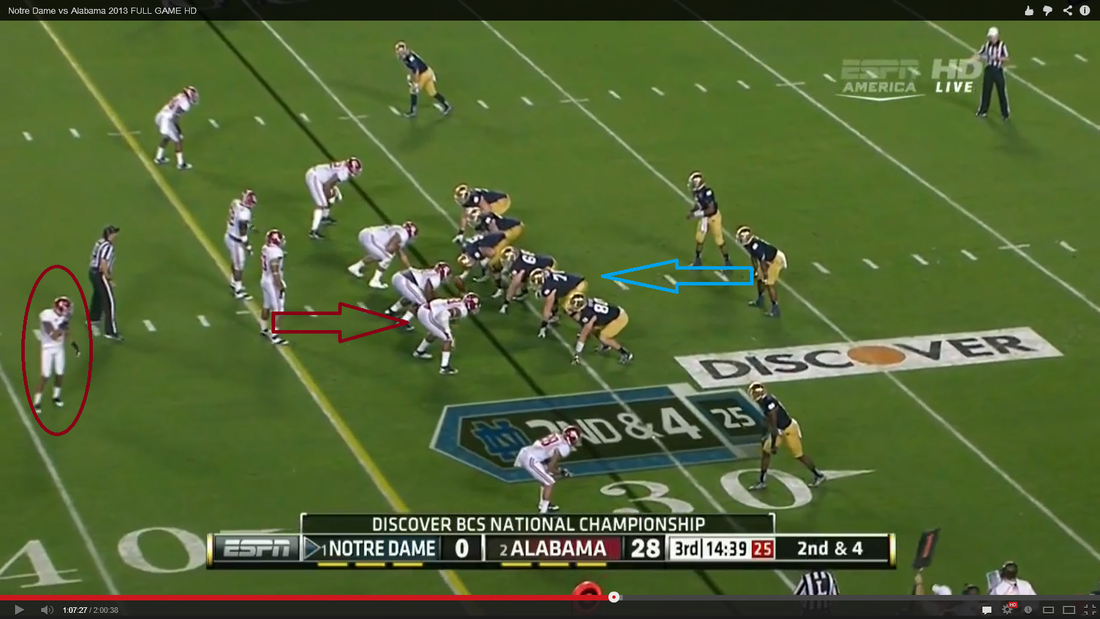 Alabama is in a four man front. Logic would dictate that Martin would be responsible for blocking the defensive end Ed Stinson (# 49) highlighted by the crimson arrow. You will see as the play unfolds Martin makes a post snap adjustment and ends up blocking the circled safety Ha'Sean Clinton-Dix (# 6) . 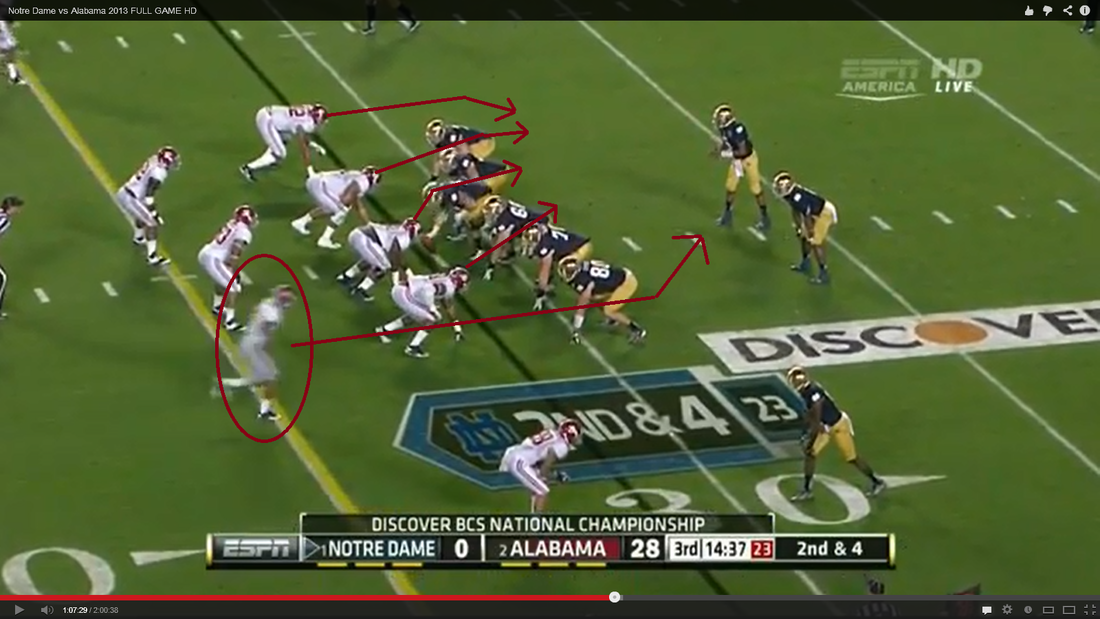 The Crimson Tide is running a slant to the wide side of the field and blitzing the safety off the edge to the short side. Picking up players from the secondary is challenging for linemen, especially when they show up late like Alabama safety Clinton-Dix does. 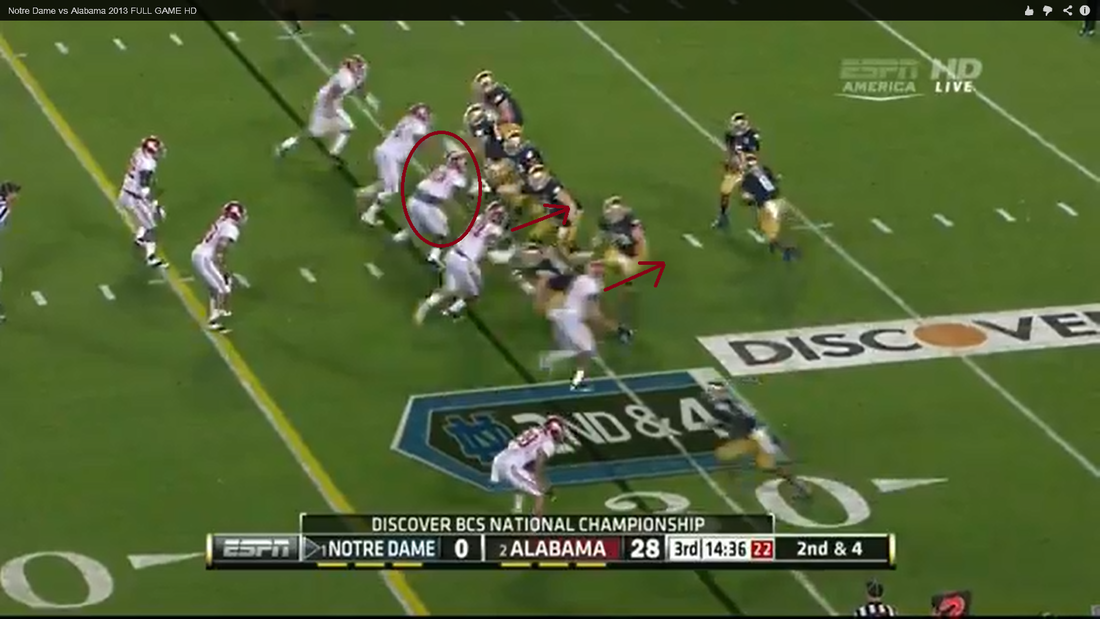 A fraction of a second after the snap. Martin is in a tough spot and has a decision to make. He has two potential players to block defensive end Ed Stinson and safety Ha'Sean Clinton-Dix. Typically when you have two players to block the rule is you take the one to the inside because they have the most direct line to the quarterback. However Martin's smarts and experience allow him to see a bigger picture. He realizes defensive tackle # 92 Damion Square (crimson circle) is slanting inside. That means that center Braxton Cave (# 52) can pick him up. Therefore, guard Chris Watt (# 66) is free to pick up the slanting defensive end and Martin can slide out and take the blitzing safety. This sounds fairly straightforward until you realize that Martin has to process all of this in a split second. Furthermore, when the decision is made he must have the agility to get outside and block a smaller, faster player who has timed the snap count and is already on the run when the ball is snapped. 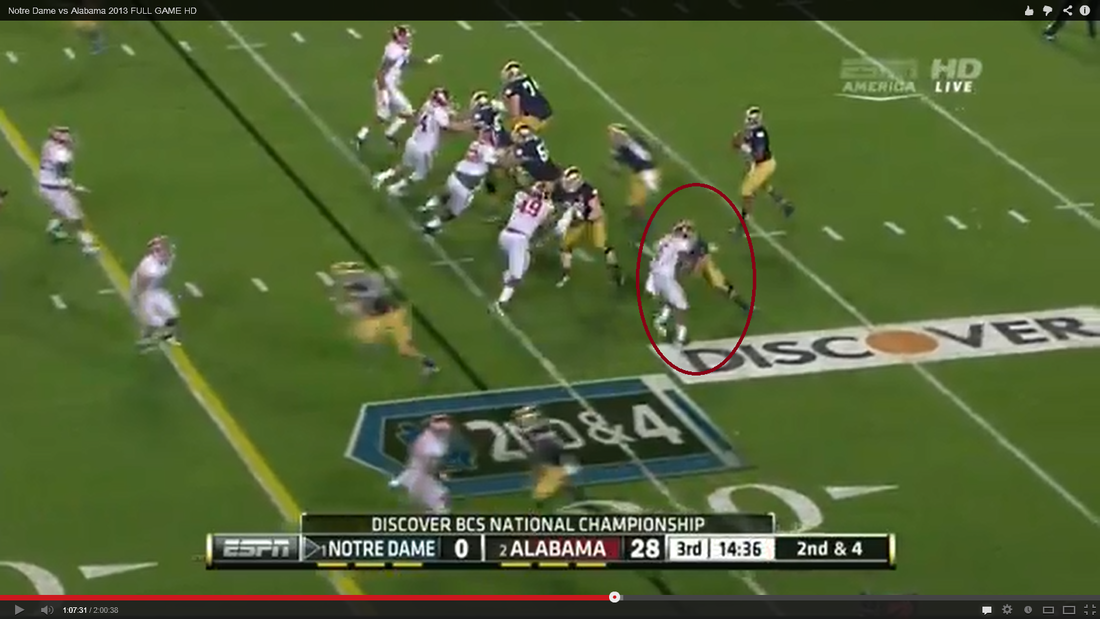 Martin gets into perfect position and it's all over. No problem, block made, mission accomplished. 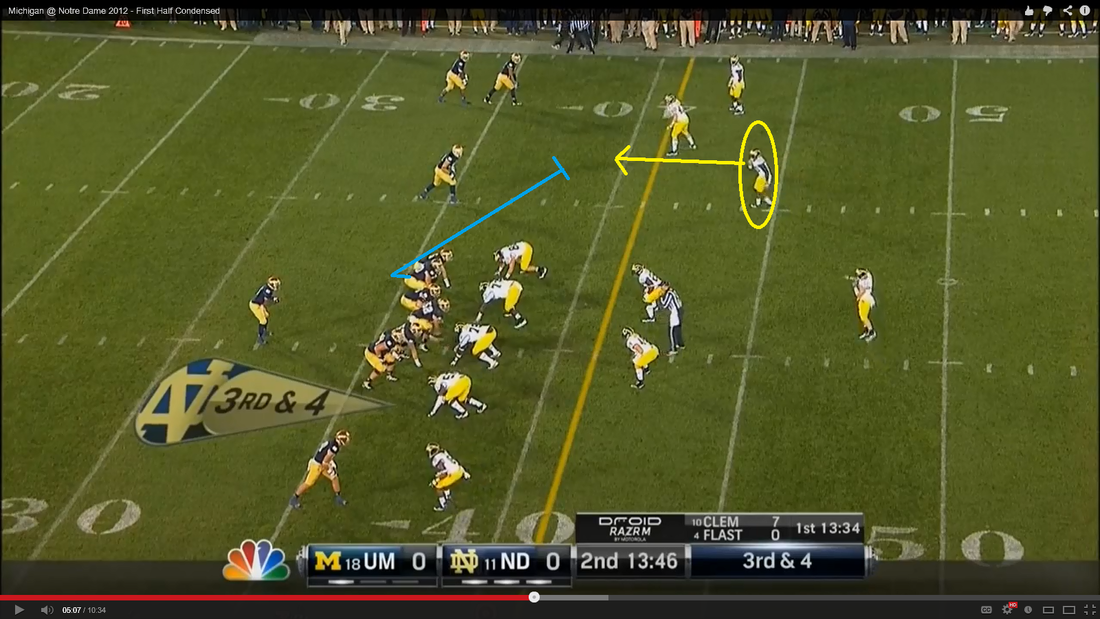 This will be a quick screen to Theo Riddick (# 6). Martin has a difficult assignment on this one. He has a long pull and will have to block a smaller, more agile player in space. 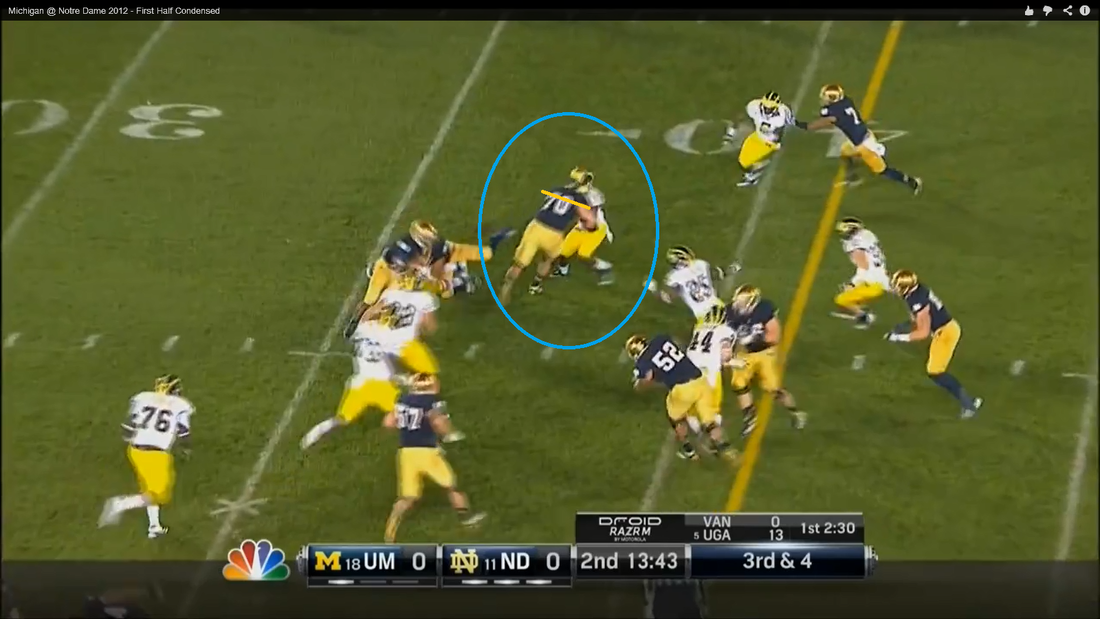 Once again Martin makes a very difficult block look easy. He has no trouble getting to the perimeter and is in perfect position to execute the block. At the moment of contact he drops his pad level, so he can generate maximum power. This is textbook open field blocking technique.

When you watch the video, turn up the volume. You will hear the popping of pads when Martin makes contact. Not only does he have the speed and agility to get into position to make the block, he delivers it with bad intentions.

Zack Martin is an exceptional pass blocker. He is technically very sound, his positioning is impeccable, and he's very smart. I would be surprised if there is a better pass blocker in the country.

I hope that you enjoyed reading these posts, I really enjoyed writing them. It was a pleasure watching Zack Martin play after play while I researched the article. He is an amazing football player. I would say that in 2012 he played his position at a level that is equal to that of recent first round NFL draft picks Michael Floyd, Harrison Smith and Tyler Eifert during their final years at Notre Dame. I realize that's high praise for someone who didn't enter the draft and likely won't be drafted in the first round in 2014. Even so, I feel that Zack Martin is playing at an elite level and we're very fortunate to get an extra year with a player of his caliber. Now if the coaching staff will let him play a little fullback all will be right with the world. Louis Nix III at QB, Zack Martin at FB, imagine the possibilities.