Zack Martin is one of the best players in the country. He's that good.

Our own 4 pointshooter was part of an esteemed panel of voters counting down the top 25 Irish players on Keith Arnold's excellent website Inside the Irish. Like all the other members of the panel 4 pointshooter had Zack Martin rated very high. This makes sense. It's no secret that Zack Martin is a good football player. Yet most of us would struggle to provide evidence to support the this claim. That's pretty common for offensive linemen they tend to ply their trade in relative obscurity. O-linemen don't have much in the way of stats to quantify their performance and typically when they do make a good play others get the recognition. So we figured it was time to give the big eaters up front a little love and put the Iso Cam on Zack Martin.

Initially, the plan was to do a single post and breakdown some plays that highlighted Martin's talents. This should have been a pretty easy task. Martin is a very good player, yada, yada, here's some examples bada bing, bada boom, done. Well that lasted about 5 minutes. As I watched the film I was blown away by Martin's performance. I quickly realized there was no way I could do justice to Zack Martin in one post. Instead I'll break down his performance in two posts. This post will take a look at his run blocking and the next post will take a look at his pass blocking. After doing the research, I've become convinced that Zack Martin is one of the best players in the country. He's that good. Let's take a look at some examples of his excellent play and you can make your own determination. 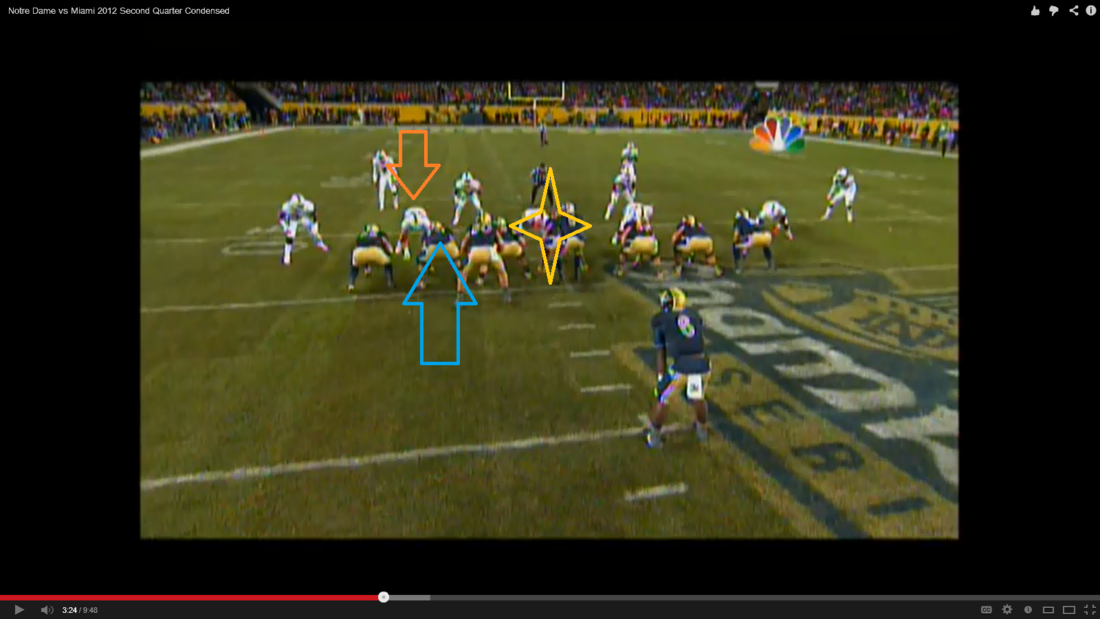 3rd and 1. Everyone in North America knows that Notre Dame is going to run the ball. This is a classic "battle in the trenches" scenario. The ball is going to end up being run approximately where the gold star is. Zack Martin (# 70) identified by the blue arrow is responsible for blocking Anthony Chickillo (# 71) identified by the orange arrow. The 6'4" 270 lb Chickillo is no slouch. He started every game for the Canes last year and was an all ACC honorable mention. 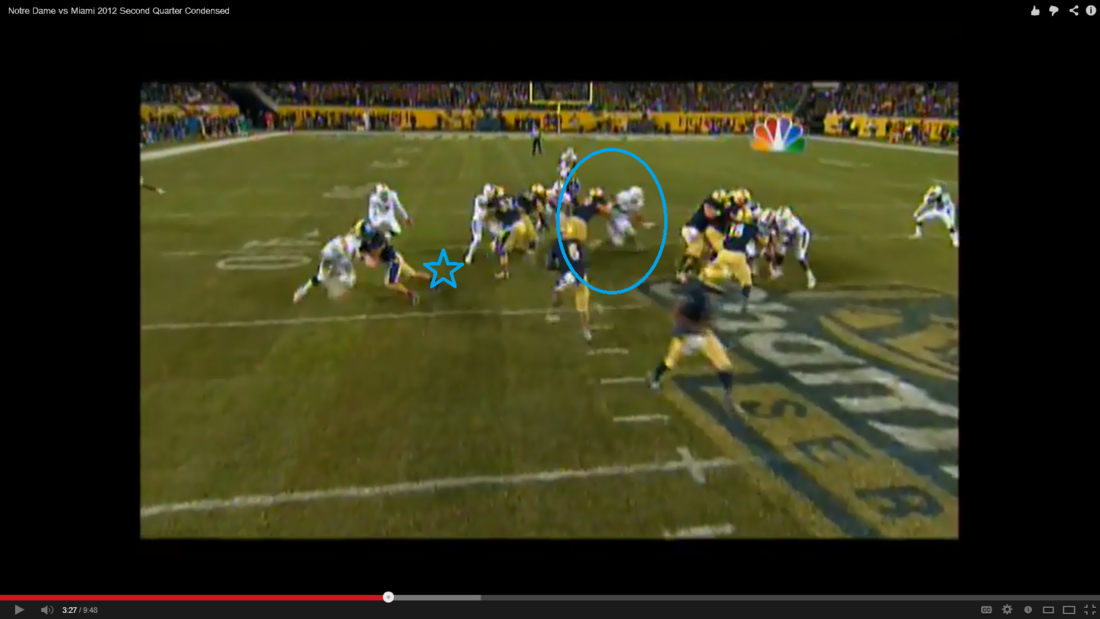 A second or two after the snap. Chickillo tried to shoot inside on Martin. As you can see, that didn't work out particularly well for Mr. Chickillo. Martin simply drives him across the formation past the point of attack. For perspective, Martin made initial contact roughly where the blue star is. 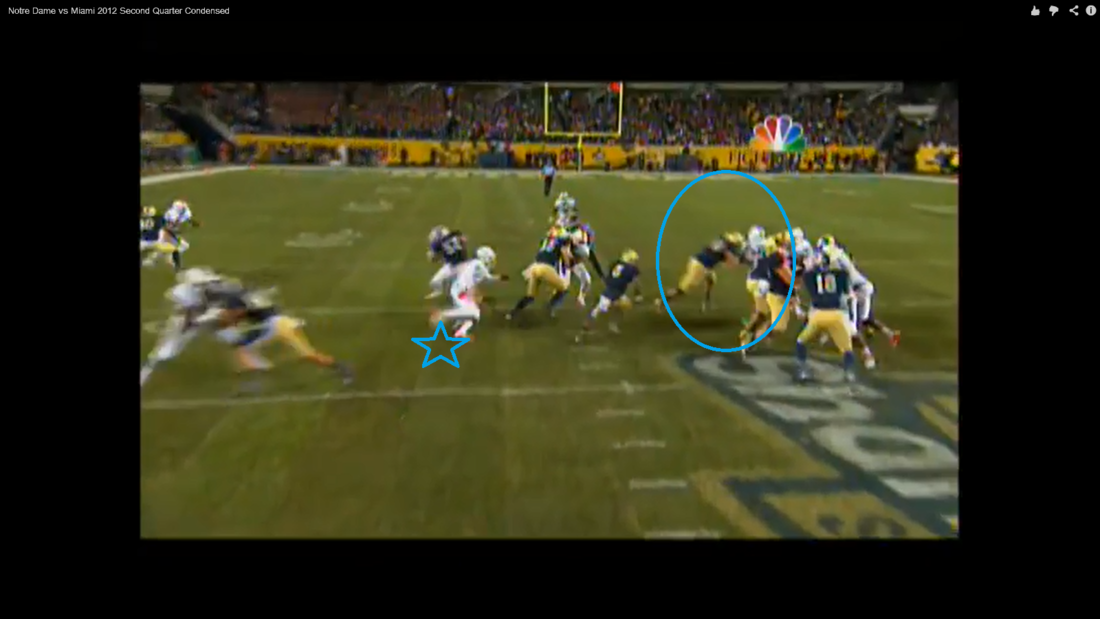 Martin finishing the block. How far do you think Martin drove Chickillo, 7 - 8 yards?

Check out the video to see this play in full speed and then in slow motion. Pay close attention to how Martin pops Chickillo up on initial contact. 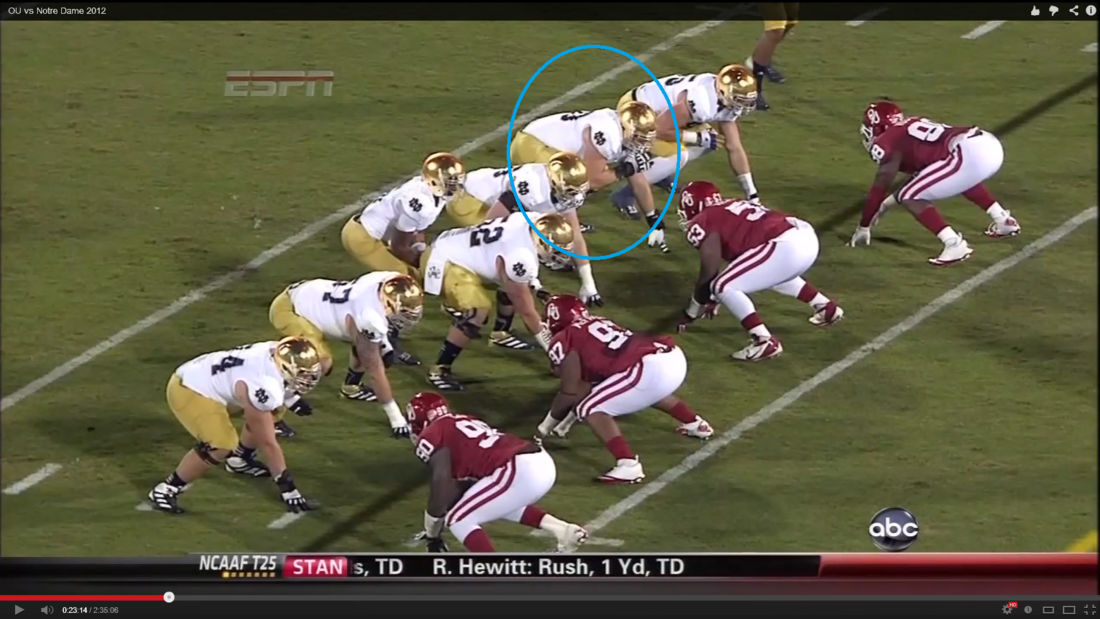 2nd and 5 in the first quarter against OU. Wisely the staff has called a run play that will have Martin at the point of attack. He is going to step inside and help with defensive tackle Casey Walker (# 53) and then move to the second level and block linebacker Tom Wort (#21) 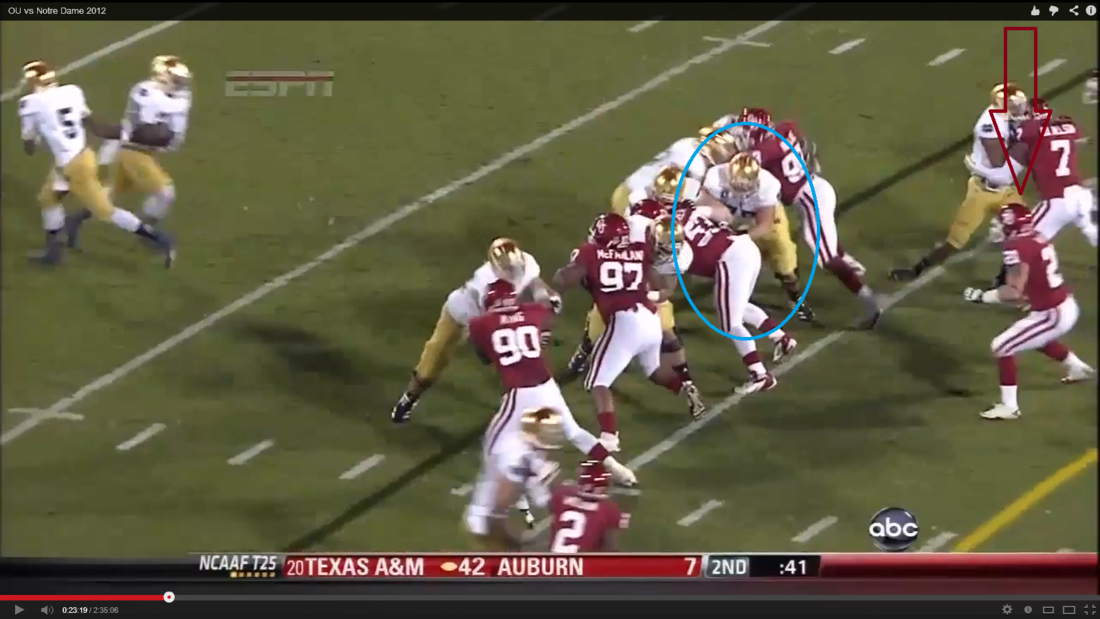 Martin has helped to seal the defensive tackle inside. Now he has to move quickly to take care of the linebacker that is looking to fill and make the tackle (identified with the crimson arrow) 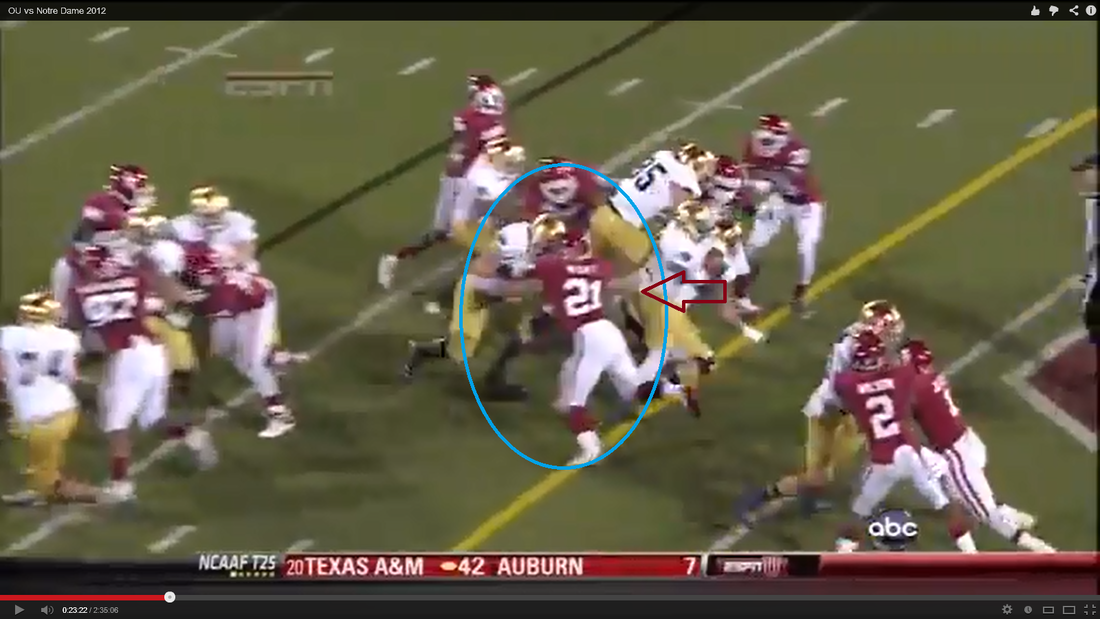 Martin has successfully made it to the second level and has secured a key block at the point of attack. Wort reaches out (shown by the crimson arrow) to try and slow down Cierre Wood (# 20), but there is no way he's getting off that block. Martin owns him. 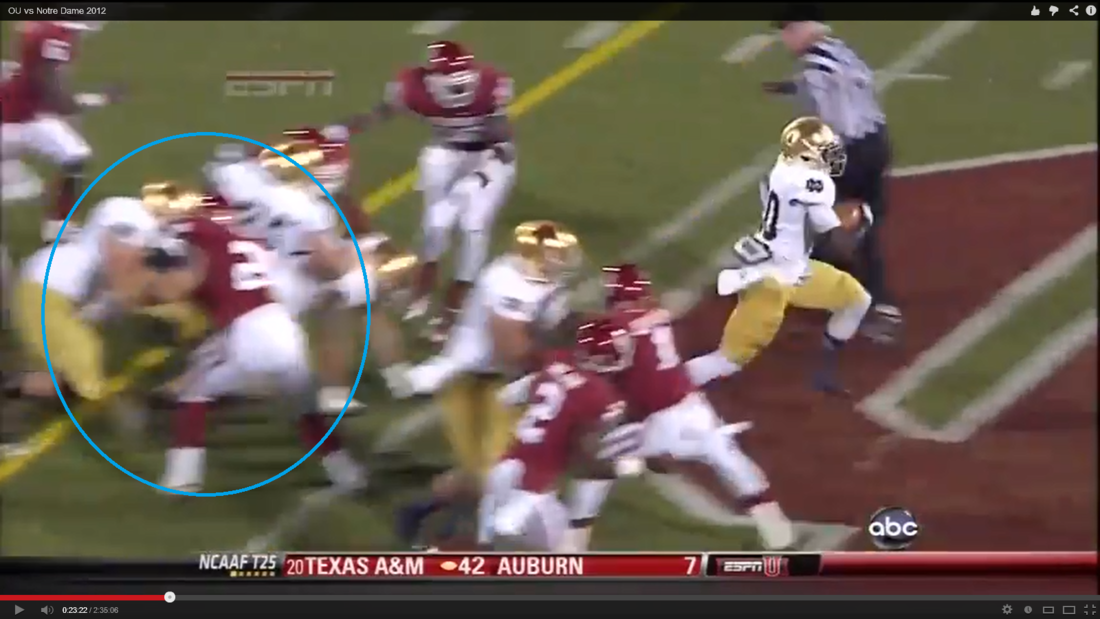 Wood is off to the races. Martin continues to maul Wort and now has him about 7 yards down field. Wort's best chance might be to fall down, curl up in the fetal position, play dead and hope that Martin will lose interest in him and go find a DB to feast upon. 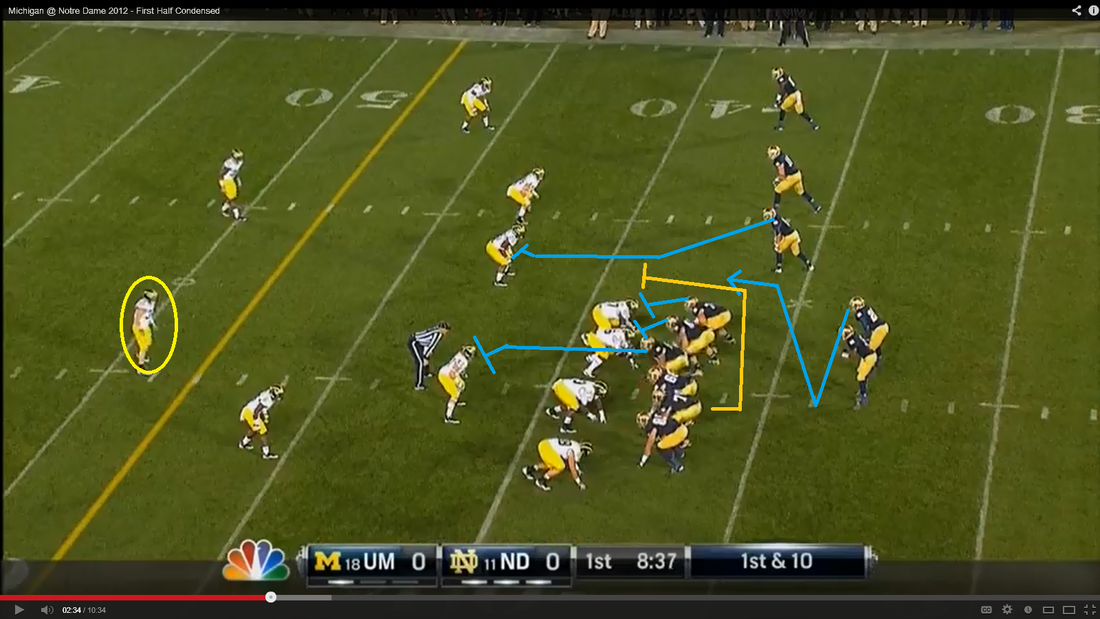 Notre Dame is going to run a counter play here. Martin will be expected to pull, turn up field and block the first threat. If things go as planned and everyone makes their blocks Martin will be responsible for the safety (circled in yellow). This is a long pull and will require Martin to move quickly to get to the point of attack. 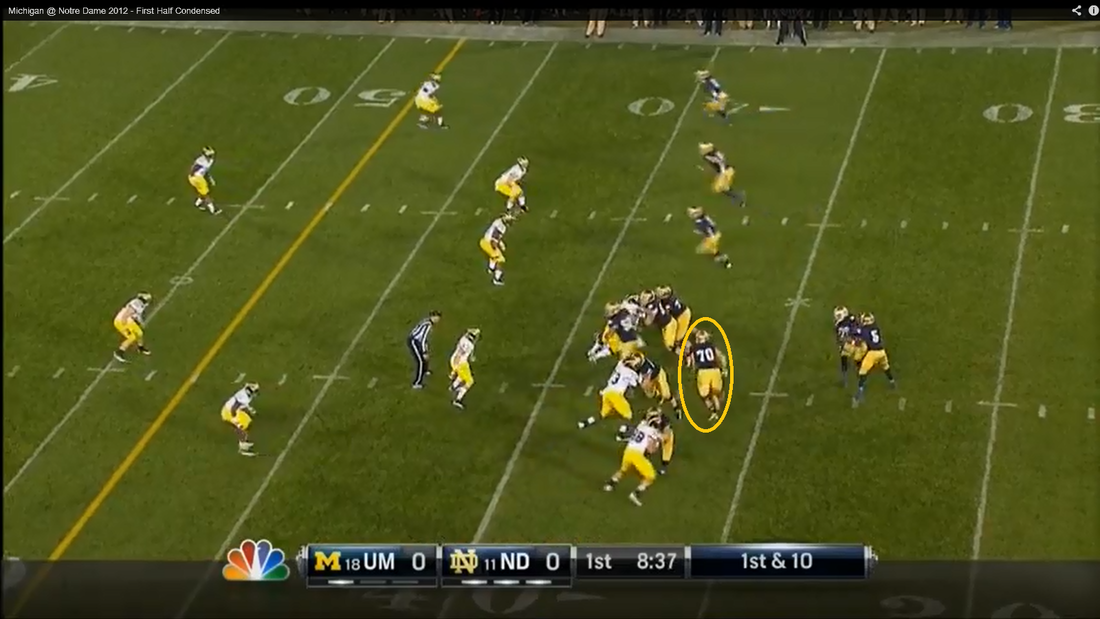 Martin moves very well for an offensive lineman and will have no problem getting turned up field to make a block. 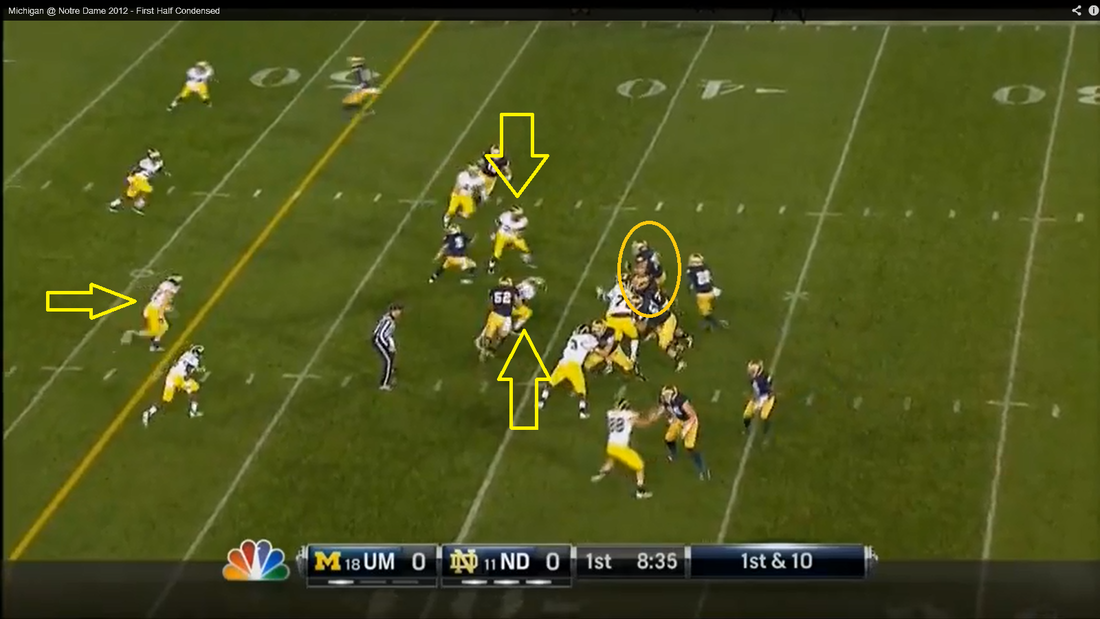 Martin has turned the corner. He is in excellent position, with his shoulders square to the line of scrimmage. This is a little nuance of Martin's game that many people don't appreciate. He is technically very sound. By squaring his shoulders Martin can make a block in multiple directions, depending on where the first threat is. On this play Notre Dame is in some trouble as both Robby Toma (# 9) and Braxton Cave (# 52) have missed critical blocks. Martin has three defenders in good position to make a tackle (highlighted by the yellow arrows). In a fraction of a second he will have to decide which one is the most immediate threat and then get into a position to make a block on that player. 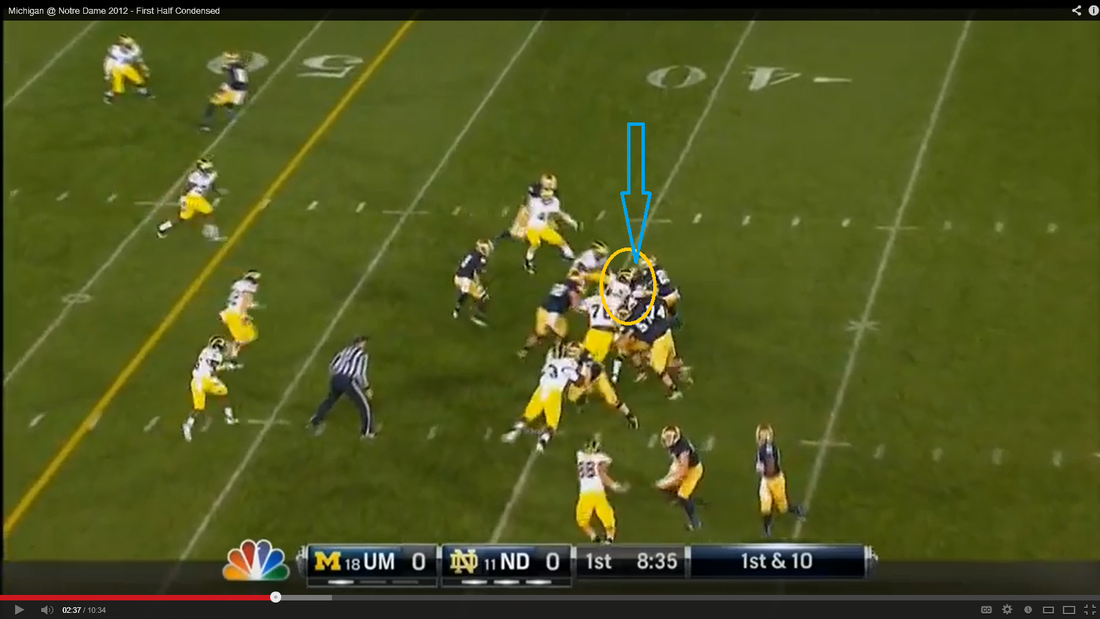 When you watch the video of this play you might wonder why I selected it. It's a play that goes for only a few yards and it isn't a physically dominating block by Martin. Even so, I think it is an outstanding play. Martin shows very good athleticism making the long pull to the other side of the line. He displays great technique squaring up as turns the corner. He demonstrates excellent split second decision making and then executes a very difficult block. This is the type of play that doesn't show up on ESPN highlights, but it is a play that very few linemen in the country could make. 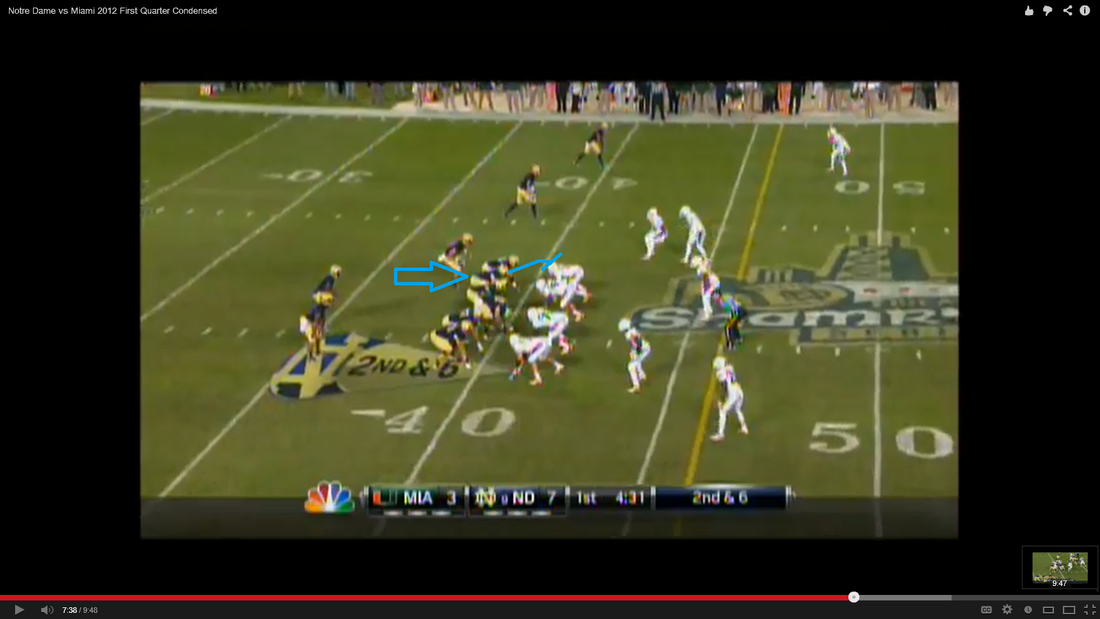 This will be an outside run, Martin will reach block defensive end Tyriq McCord (# 17). 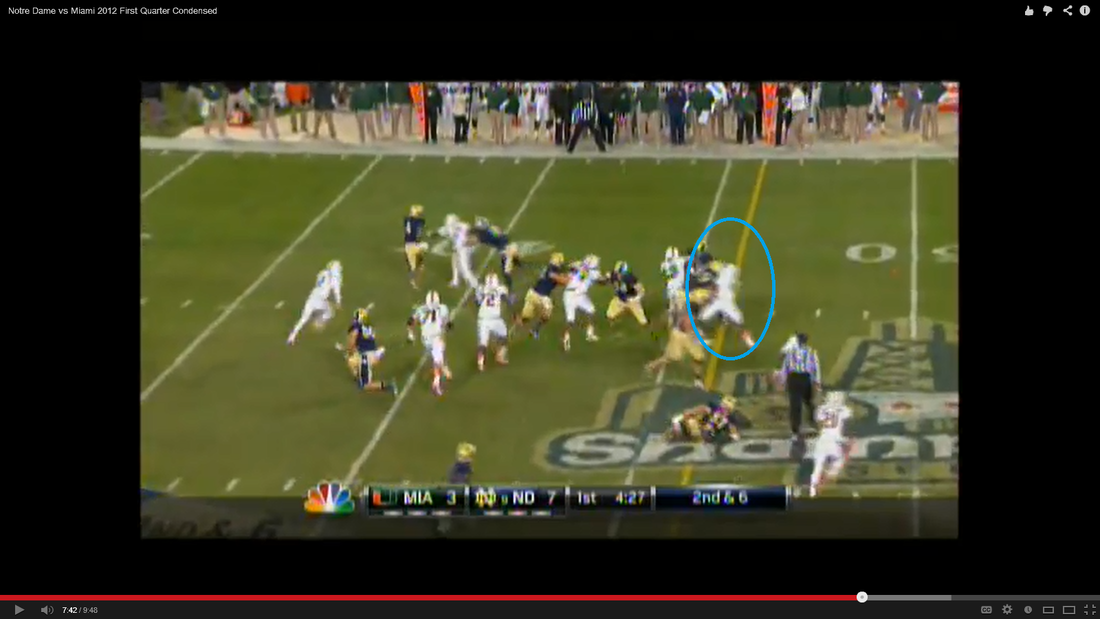 This one doesn't require a whole lot of explanation. Martin has his man 6 yards down field. Wait it gets better. 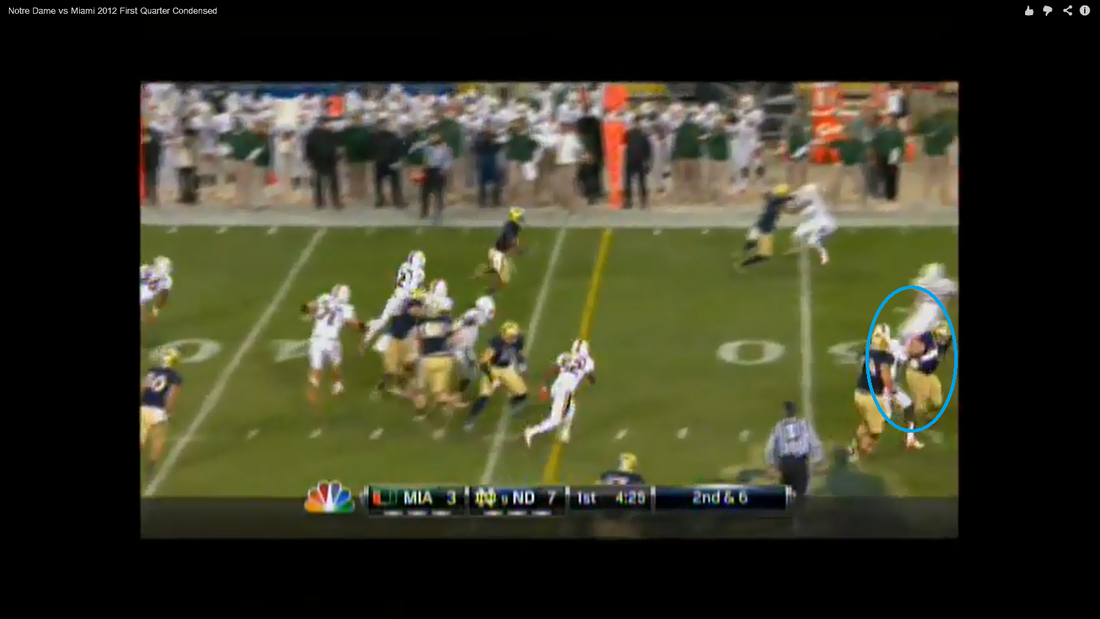 This is where Martin finally loses the block. He's driven the defender roughly 12 yards down the field.

It's even better watching this one full speed. Martin has the Miami defender on roller skates.

Martin surprised me with his run blocking. I knew that he was technically sound, but he moved much better than I anticipated and was much more powerful than I expected. As a run blocker, Martin is smart, powerful and technically sound. I have always held Zack Martin in high regard. After watching him play more intently, I've come away even more impressed. Zack Martin is the real deal.