OFD Films: Game Within the Game - Rushing the Passer

Share All sharing options for: OFD Films: Game Within the Game - Rushing the Passer

Typically if teams want to pressure a quarterback they blitz. While this approach can be highly effective, it does put extra pressure on the secondary by forcing them to play a lot of man coverage. With a very young secondary in 2012, frequent blitzes were simply not an option for the Notre Dame defense. So Bob Diaco had to find alternate ways to generate pressure on the quarterback. Throughout the year the Irish coaching staff did a masterful of job of creating game plans that generated a very good pass rush with minimal blitzing.

Ironically, one of the ways they would do this is to start the game with a conservative, traditional pass rush. The goal was to attack the offensive linemen forcing them to stop moving their feet and anchor down. Once the opposing linemen started to anchor down, Diaco would switch the attack and call more line stunts. Basically a line stunt is where a defensive lineman switches pass rushing lanes with another defensive lineman after the ball is snapped. These stunts were a critical component in generating an effective pass rush in 2012. Let's take a look at the first half of the Miami game and I'll show you what I mean. 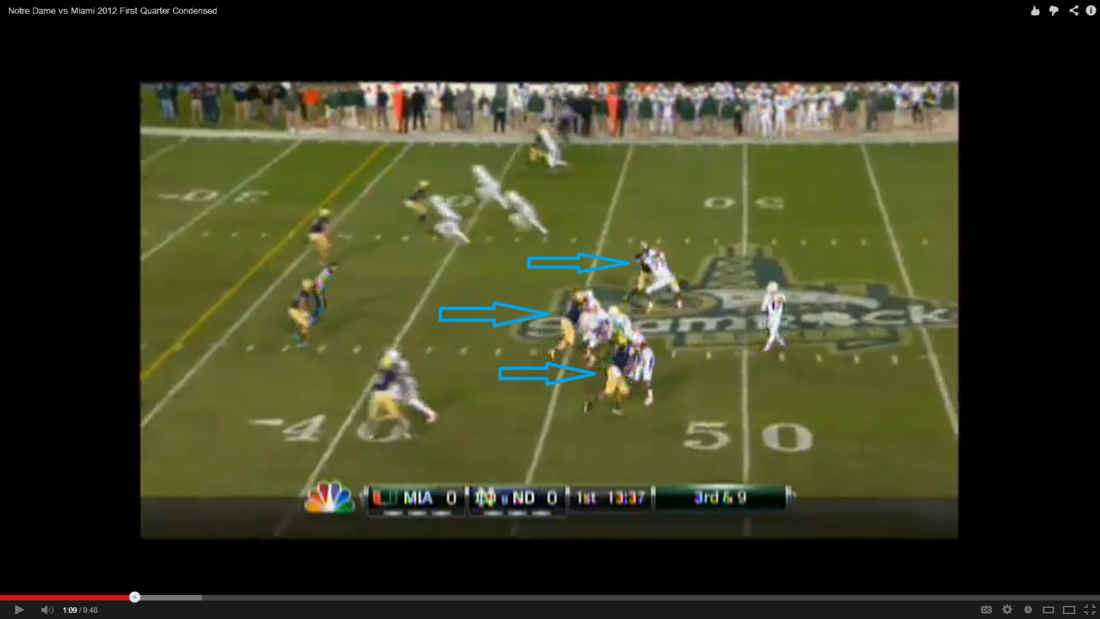 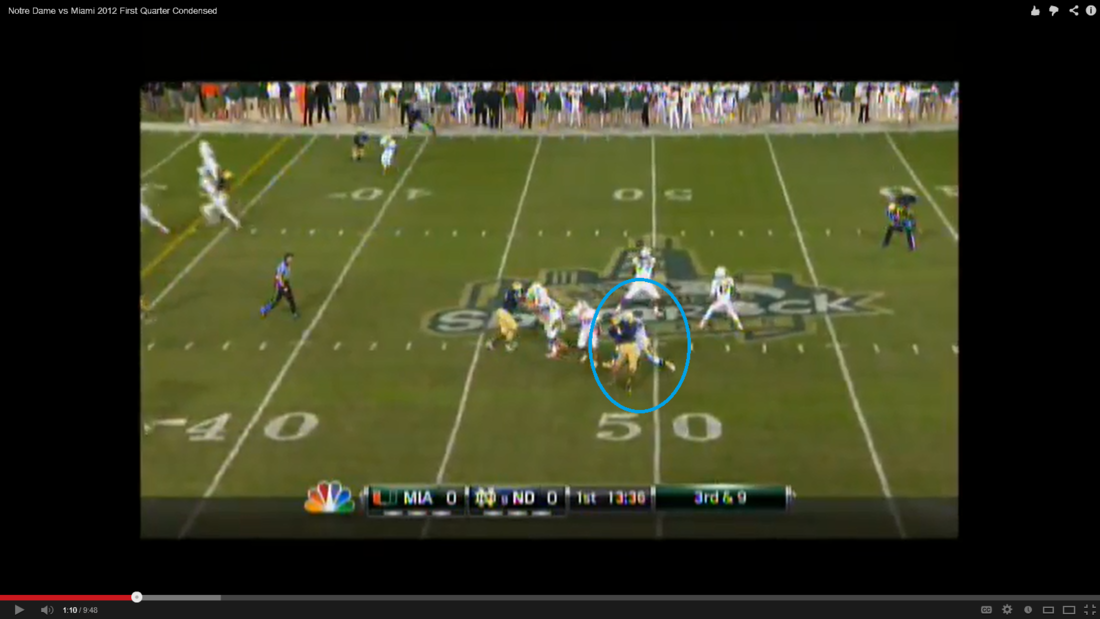 This is the same play a fraction of a second later. As you can see the Notre Dame defensive linemen remain engaged and are bull rushing the offensive linemen. Over time what happens is the offensive linemen realize they are going to be hit on every play and start to brace themselves for the inevitable contact . You can see what I'm talking about in this frame. Stephon Tuitt (# 7) is mauling the offensive tackle for Miami, Malcom Bunche (# 79) . This forces him to widen his stance and sink his hips so he doesn't get steam rolled by Tuitt. While this prevents him from getting run over, this type of stance makes it difficult to move laterally and react to quick inside moves. This will become important later. 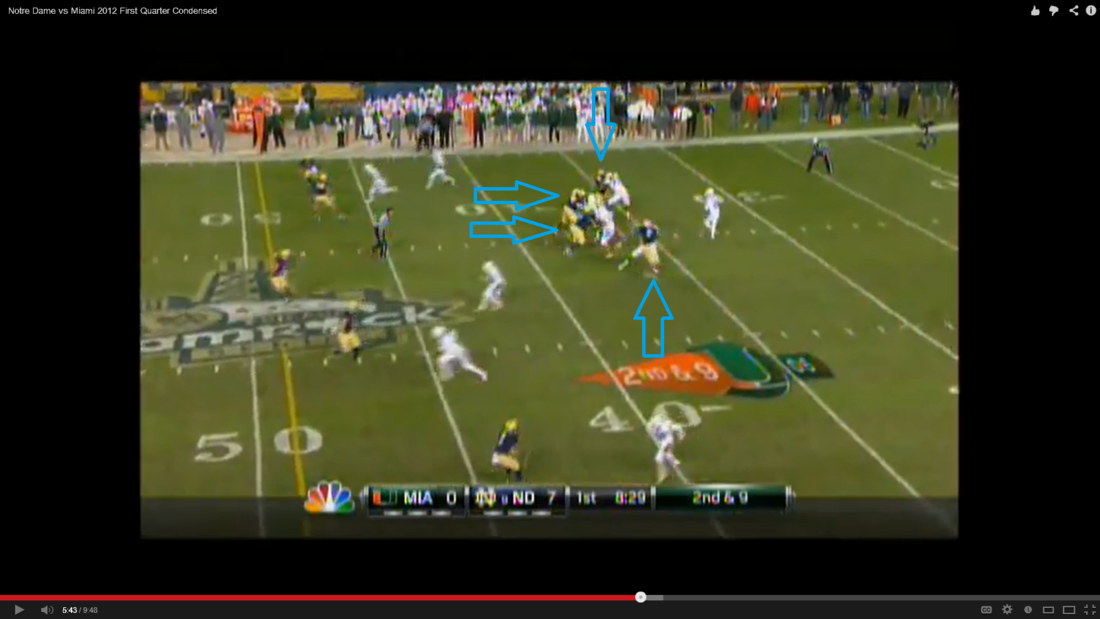 Pretty much identical to the first play except this is a four man pass rush. Once again all the offensive lineman are being engaged and forced to brace themselves.

Looking back at the film it was clear that Diaco was setting Miami up. In first quarter he didn't call a single line stunt. He waited for his defensive linemen to punish the Miami offensive line and get them to anchor down. When Miami started to move the ball, Diaco changed his approach and called line stunts to generate pressure. 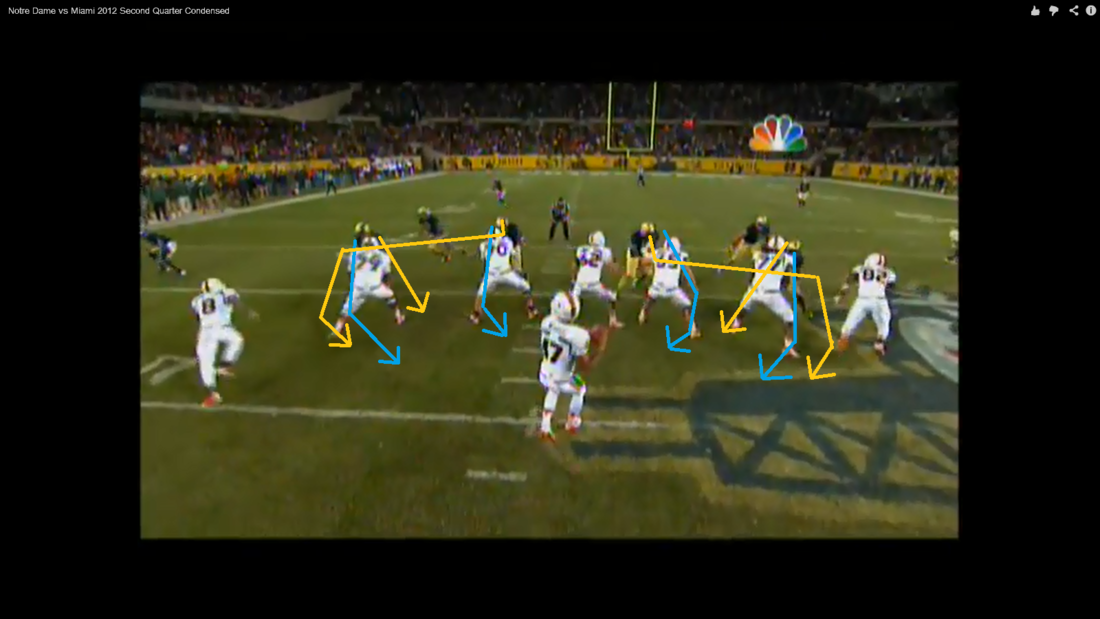 The traditional pass rush routes for a four man front are represented by the blue arrows (admittedly some teams will have one of their defensive tackles go through the A gap, but for our purposes here that really isn't important). All game the Notre Dame defensive linemen have been following the blue arrows and coming very hard. The Miami offensive linemen are bracing themselves for the onslaught. This time though, things will be a little different. Diaco has called a line stunt. The pass rushing routes will switch post snap and follow the gold arrows. 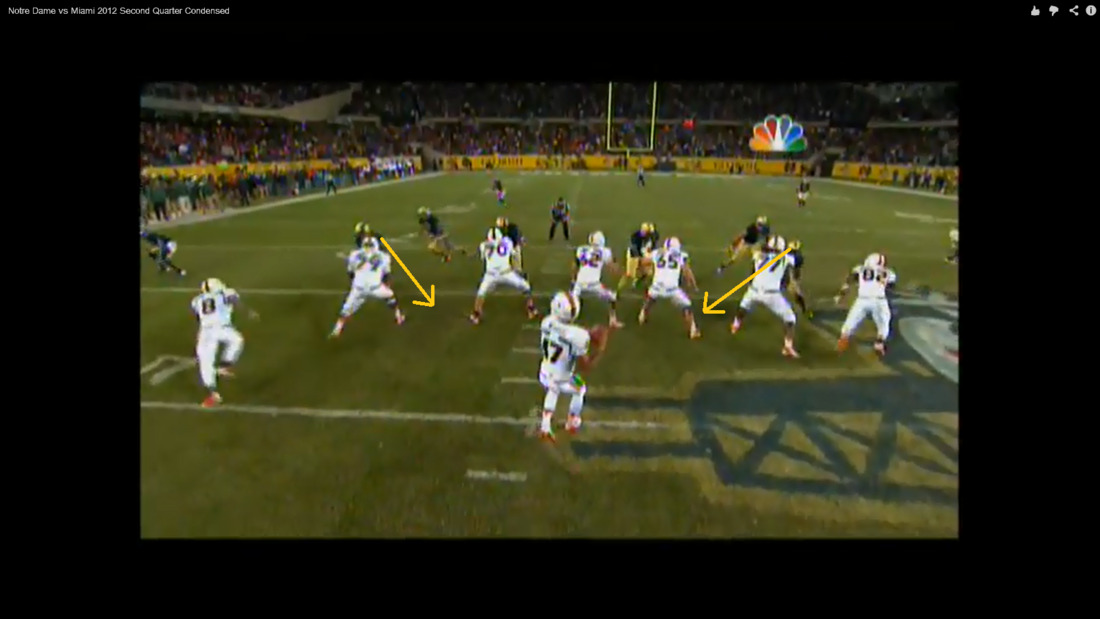 In this type of stunt (often called a twist) the defensive ends will make a quick inside move. This is a really difficult adjustment for offensive tackles. When an offensive lineman has been getting bull rushed all night by a pass rusher (think Stephon Tuitt hitting you repeatedly), they tend to cringe a little and start to anchor down early to take the coming impact. When the pass rusher suddenly makes a quick move instead of engaging, the offensive tackle is caught flat footed. This usually leads to a holding penalty or pressure on the quarterback. 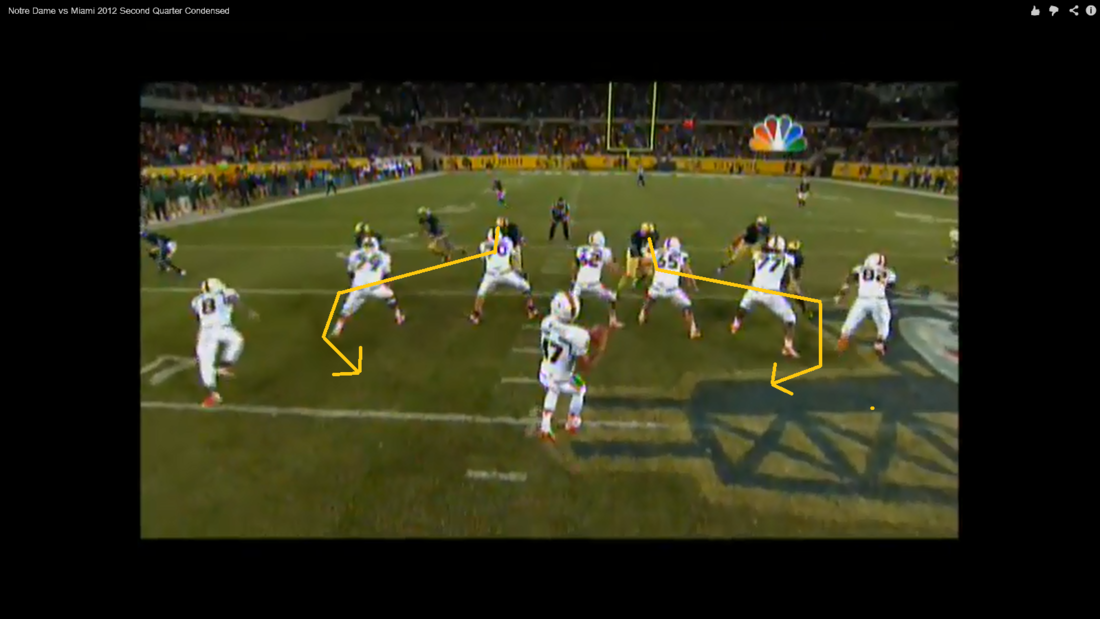 The defensive tackles take a bit of a longer route to the quarterback in this type of stunt. Their first job is to step to the guard and make him think that he is going to get a traditional pass rush. This means the guard will have to brace himself and therefore won't be able to react as quickly to this alternate pass rushing path. 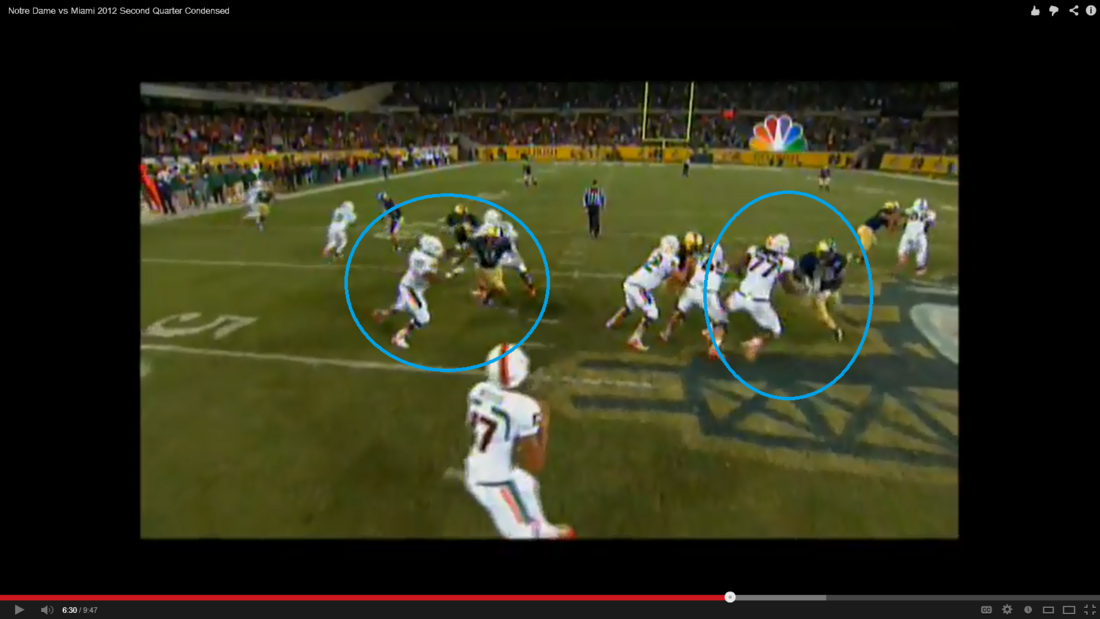 The stunt is in the process of being executed. Both offensive tackles are in poor position. Left tackle Malcom Bunche (# 79) has been beaten to the inside by Ishaq Williams (# 11) and right tackle Seantrel Henderson (# 77) is too far inside to effectively take on looping defensive tackle Kapron Lewis-Moore (# 89).

In the second quarter when Miami was moving the ball, Notre Dame called multiple line stunts and generated good pressure.The Miami offensive line was bracing for a head on attack from the Notre Dame defensive line. Instead they got quick moves and looping defensive tackles which left them on their heels and struggling to adjust. Here are a few examples.

Using line stunts to generate pressure on the quarterback was the perfect approach for the 2012 Fighting Irish defense. It protected the secondary and maximized the talents of the defensive line. As well, it was a fundamentally sound approach to teaching defense. Far too often we see players in today's college football who always want to "pin their ears back" and rush the passer. They make moves to avoid contact with the offensive line in the hopes of getting to the quarterback. While this approach can be effective at times, it can also be easily exploited through screens and draws and isn't very effective against the run. Teaching defensive linemen to attack the offensive line and generate pass rush requires great patience and isn't always a popular concept with highly rated recruits. In the long run though, it leads to a defense that is more versatile and effective in a variety of situations.