Getting decleated. A lesson in lowering your pads.

Throughout the spring we heard the Notre Dame coaching staff (and the NBC announcers) talk about the need for George Atkinson III to run with a lower pad level. For those of you who aren't completely familiar with football jargon, this refers to a technique that ball carriers use when they are about to get tackled. The idea is that the ball carrier tries to make himself more difficult to tackle by compressing his body leaving little exposed to would be tacklers. Let's take a look at some film and I'll show you what I mean.

Good technique would see the ball carrier with his eyes up, presenting only the top of the shoulder pads and churning knees as points of contact. Here's an example 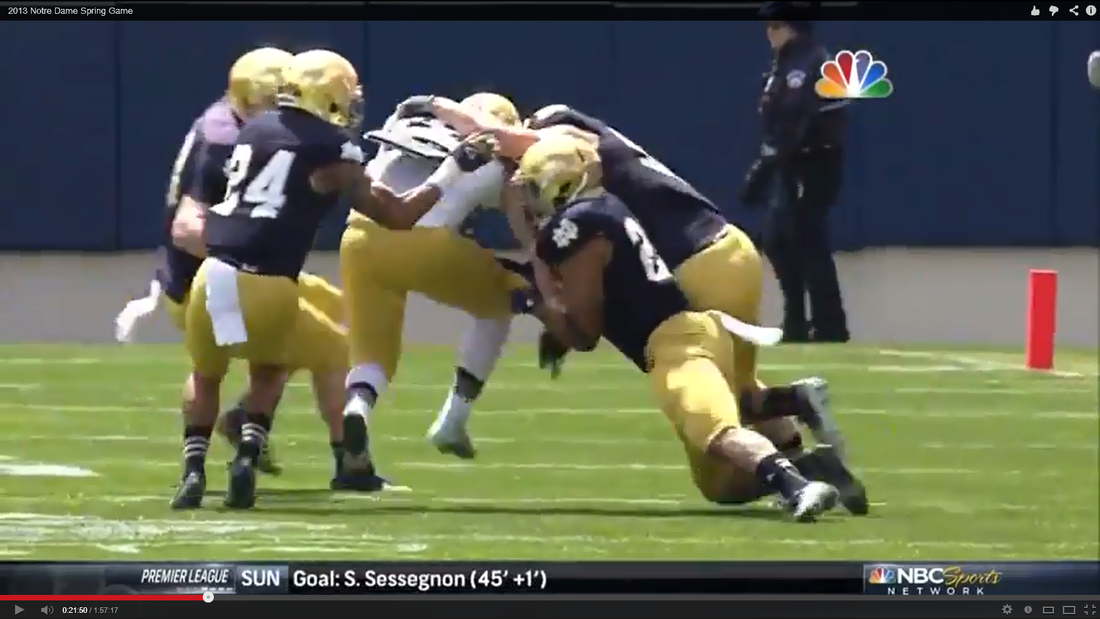 As you can see there isn't much of Cam McDaniel (# 33) exposed. It's pretty much shoulder pads or knees for would be tacklers.

By contrast, poor technique would see the ball carrier in an up right position, with his chest exposed to tacklers (not much padding there, a lot more fun to hit from a defensive perspective!). Here's an example 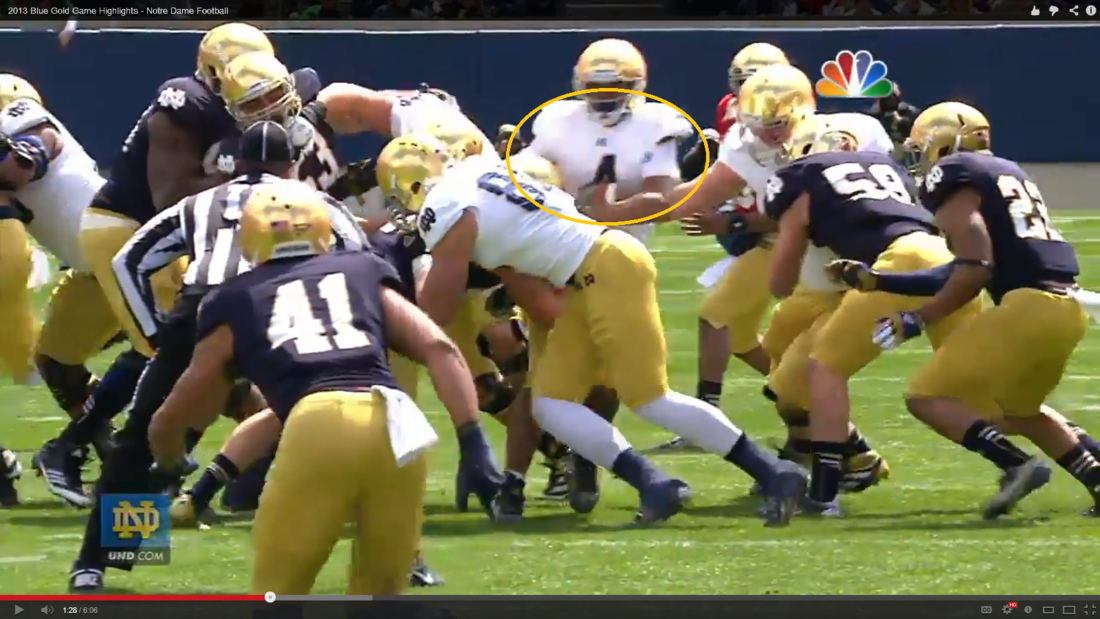 Full disclosure this screen shot isn't totally fair to George Atkinson III (# 4). It is taken a millisecond after he is hit by Carlo Calabrese (# 44) . Consequently GA III has been knocked into a more upright position. I included it because it provides a great contrast to the screen shot of the correct technique.

Now that we have a sense of what lowering the pads looks like, the question becomes why does GA III seem to have a difficult time lowering his pads? I decided to take a look at the film from the Blue and Gold game to see what the issue was. After watching a couple of plays it became pretty obvious. GA III tends to drop his head not his pads on contact. I know there is considerable debate in the NFL right now about running backs dropping their head when they take on a tackler. It's important to understand that when a back drops his head he also must drop his pad level to be effective. If he doesn't, he's going to get rocked. For the record, I'm not a huge fan of any player at any level dropping his head on contact, I think it is a very dangerous play.

It's common for inexperienced players to drop only their head when they are told to get lower. By dropping their head and pointing their eyes to the ground their brain tells them they are getting low. In reality what happens is they remain relatively upright and can't see anything but the ground. This isn't a great position to be in when you are running between the tackles. Let's take a look at how Carlo Calabrese (# 44) taught George Atkinson III (# 4) this lesson. 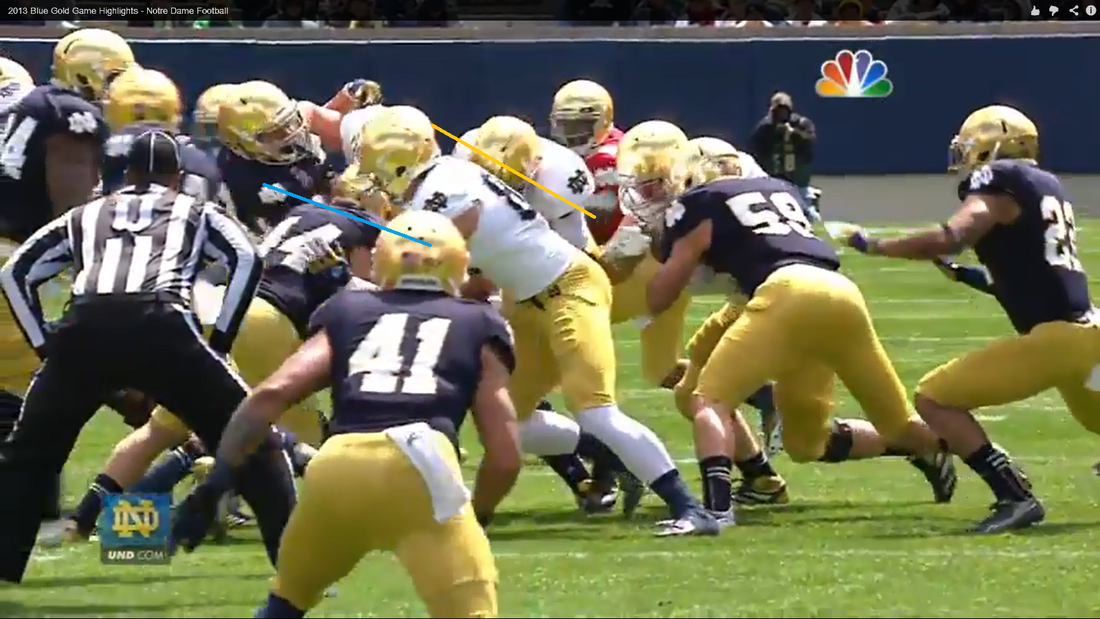 GA III about to get rocked by Carlo Calabrese. The rule in football is that low man wins. Based on pad level Carlo is going to win in this collision. GA III has dropped his head, but his pad level is still too high. 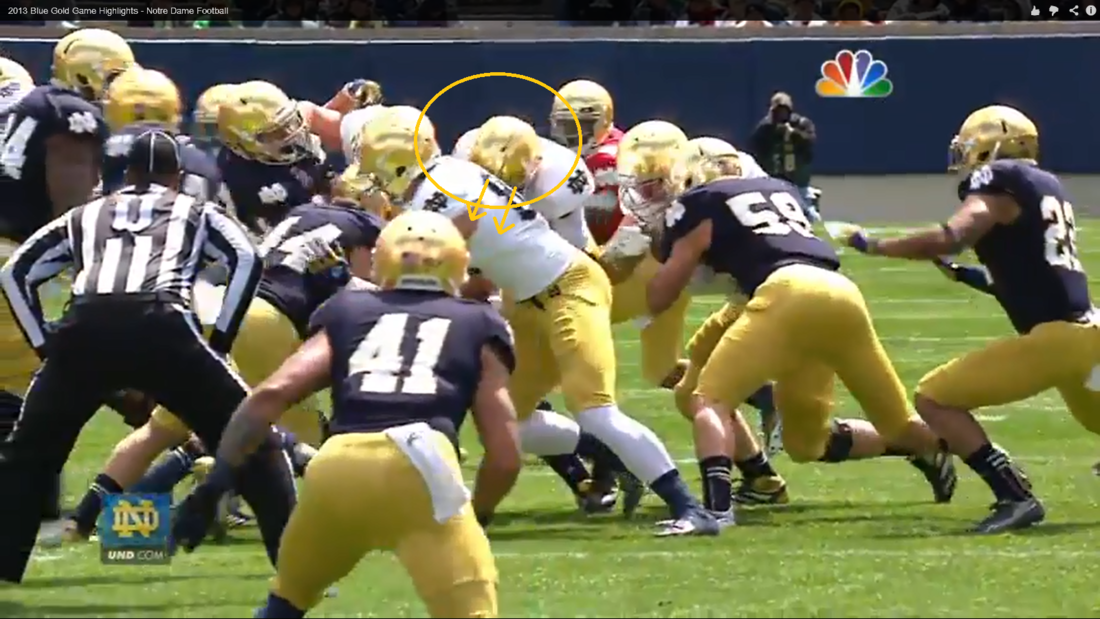 GA III just before contact. You can see the top of his helmet which means his eyes are pointed down towards the turf. This does nothing to help him lower his pads and makes it virtually impossible to see the hit coming. I'm sure that in Atkinson's mind he was dropping his pads. In reality the only thing he dropped was his head.

Take a look at the video at full speed and in slow motion. This is what happens when you run between the tackles in an upright position with your eyes down. You get decleated. 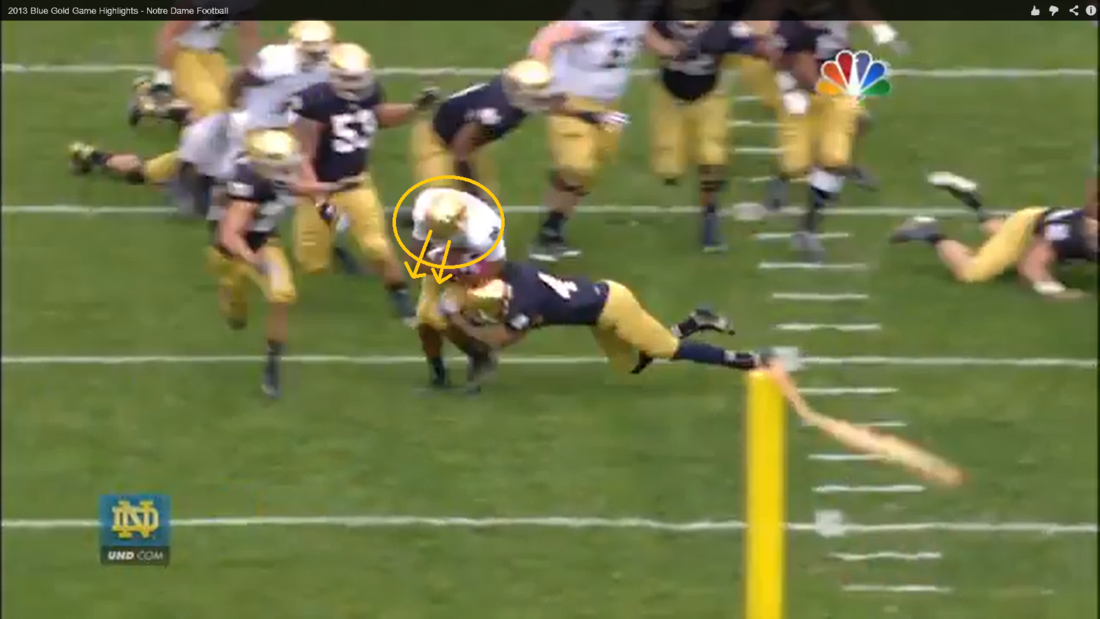 Again, all we can see is the top of Atkinson's helmet. He's in better position than the Calabrese hit but still not great. When you watch the video you'll get a pretty clear view of GA III dropping his head on the replay from the end zone.

We all know that GA III needs to work on some of the finer points of being a full time running back. Pad level is an obvious one. If GA III can learn to lower his pads and not just his head, with his combination of size and speed, he could be an effective inside runner. If he can't, he'll be spending a lot of time in the cold tub.