In this session of Iso Cam we take a look at the play that paved the way for Wild Chocolate.

The 2013 Blue and Gold game didn't have a whole lot of excitement this year outside of Wild Chocolate. In this session of Iso Cam, we are going to breakdown the touchdown that led to Big Lou's now infamous 2 point convert. 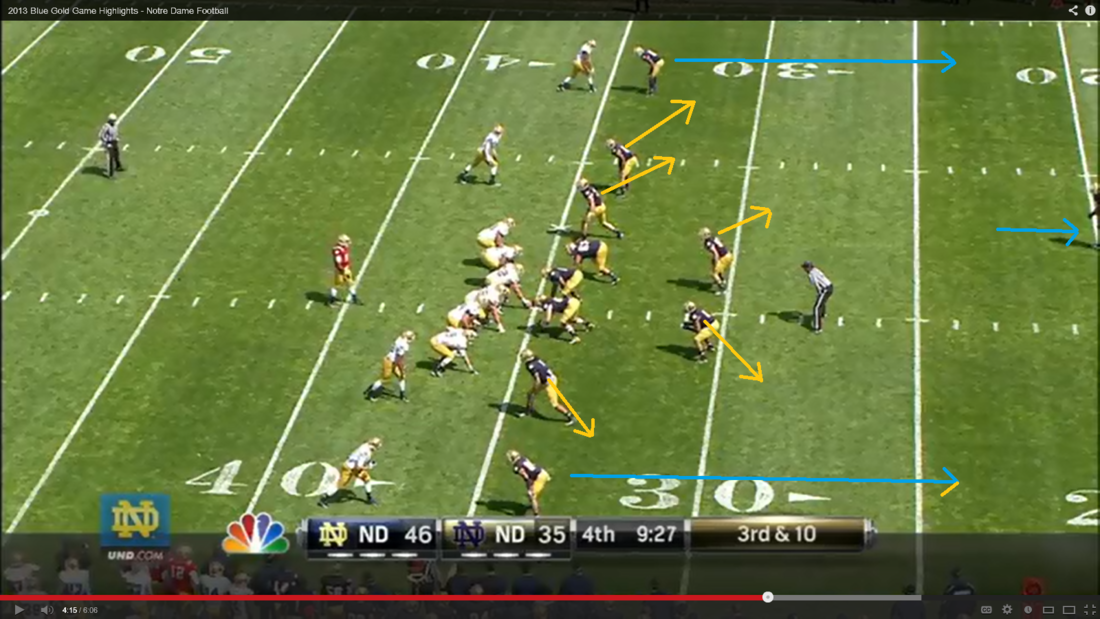 Notre Dame is about to rush 3 players and drop 8 into coverage. This is known in the OFD Lexicon as the dreaded rush 4 drop 8 defense. Instead of the traditional two deep safety look, Notre Dame has only one deep safety (he's off the screen but he's in the middle of the field). Pre-snap, the defense looks like they are in man coverage. Post-snap they will drop off into zone coverage.

In zone coverage defenders are responsible for an area of the field rather than a specific receiver. Typically the coverage is named for the number of defenders who have deep zone responsibilities. Cover 2 means two players deep, cover 3 means three players deep, etc. Out of this look Notre Dame will play cover 3 with the two corners and safety being the deep defenders (shown by the blue arrows). The remaining defenders with pass responsibilities have underneath coverage (shown by the gold arrows). 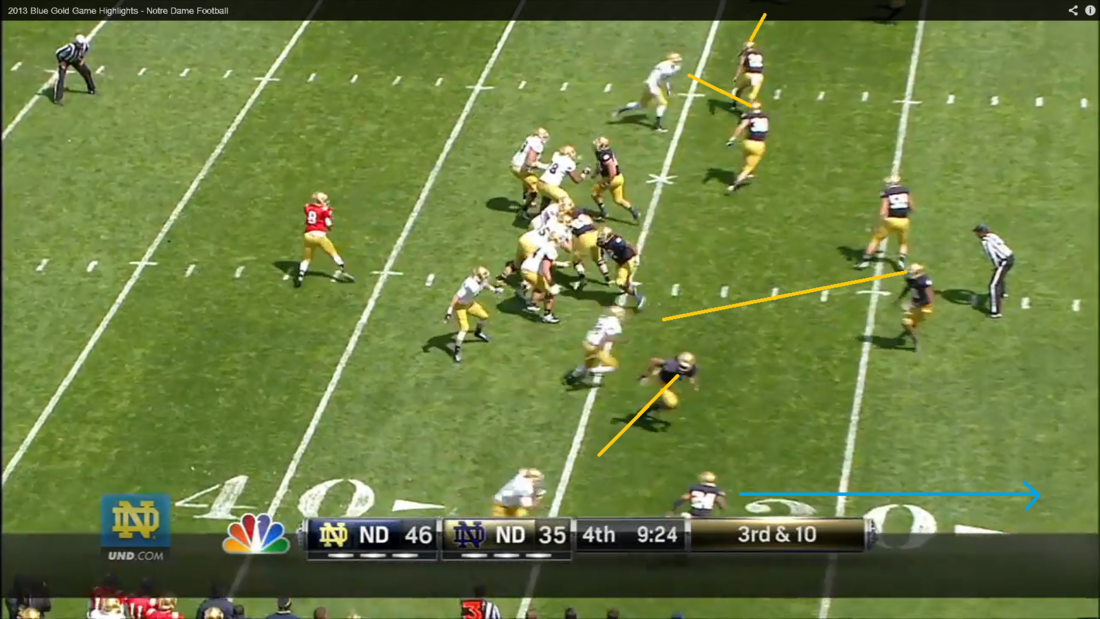 The initial responsibility of the underneath defenders is to take away the quick throw. Usually, they are taught to open to the first receiving threat outside of them and drop on a path towards that receiver. This does two things. First it makes it more difficult to complete short, quick passes by preventing an easy inside release. When you prevent the receiver from going inside you take away the shortest throw. This forces the QB to make a throw where the ball is in the air longer, which makes the pass more difficult to complete. Second, if the receiver is running a deeper pattern the defender can collision or jam the receiver. This will knock the receiver off his intended route and disrupt the timing of the play. The yellow lines show the receivers being targeted for disruption. 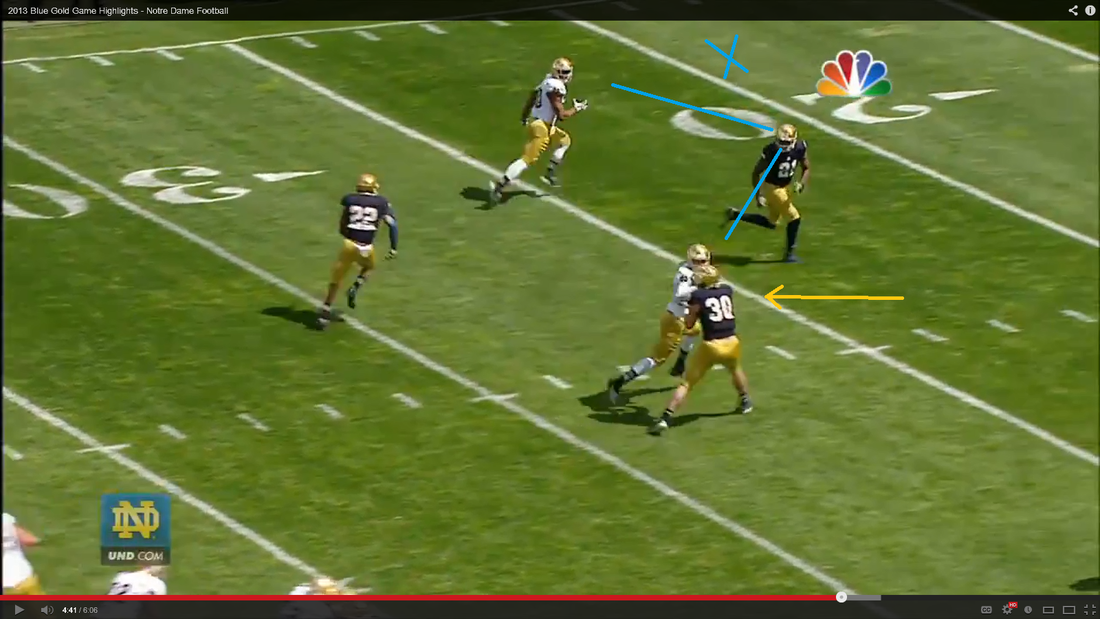 Here we see a close up of the wide side of the field. The defenders are Ben Councell (#30) Elijah Shumate (#22) and Jalen Brown (#21). Councell and Shumate are responsible for underneath coverage, Brown has deep coverage. Councell has done an excellent job of jamming Joey Brooks (#81) and disrupting his pattern. Take a look at Jalen Brown, he has fixated on the inside receiver and doesn't even see CJ Prosise (#20) streaking down the field. He should be somewhere near the blue X instead of moving towards the inside receiver. Shumate looks like he has blown the coverage, but I don't believe that is the case. Shumate has underneath responsibility in this defense. I suspect he saw that Prosise was wide open and was simply trying to make a play. 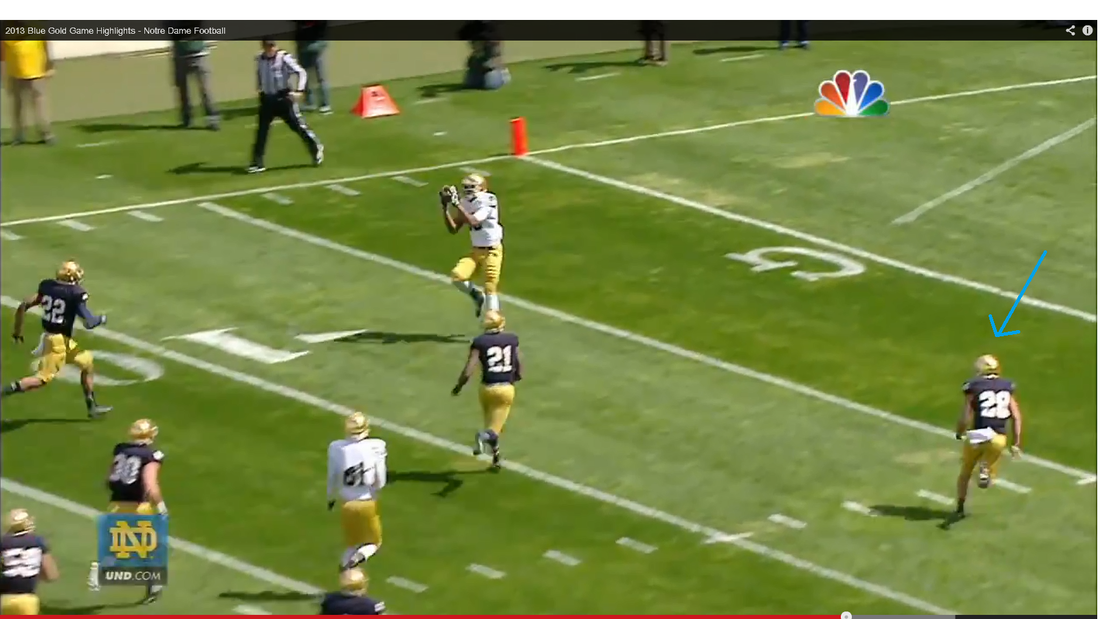 Oh no... Jalen Brown just realized that he blew it. You do that too many times as a corner and you get the nickname quick 6. Not a good nickname for a corner.

Take a look at the position of the safety Austin Collinsworth (#28). There was no reason for Jalen Brown to move towards the inside receiver. Councell had disrupted his route and Collinsworth was in excellent position to make a play if the ball was thrown to the inside.

It's never great to give up a touchdown because of a blown coverage. The silver lining? This play allowed the world the opportunity privilege of witnessing the future of Notre Dame football, Wild Chocolate.