OFD Films: The Elephant in the Room

Was the Irish defense too simple and predictable in the national championship game?

Share All sharing options for: OFD Films: The Elephant in the Room

Let's talk about the elephant in the room. Since the national championship game, some have suggested that Notre Dame was out coached, especially on defense. Supporters of this theory believe that the defensive game plan for the Irish was simple, predictable and easily exploited by the Crimson Tide.

Based on what I have seen on film, this suggestion is not entirely accurate. The defensive game plan the Irish used was actually complex by 2012 Notre Dame standards. They blitzed more often. They played more man coverage. They used more looks on the defensive line. They brought the safety into the box more frequently. Unfortunately, the evil genius that is Nick Saban and his minions discovered a fatal flaw in the Irish defense. While the rest of the defense made adjustments, the Notre Dame linebackers (in particular the inside linebackers) acted like statues frozen in place. This allowed the Crimson Tide to use a variety of formations that turned Notre Dame's linebackers into sitting ducks waiting to be picked off. Let's take a look at X's and Eh's and I'll show you what I mean. 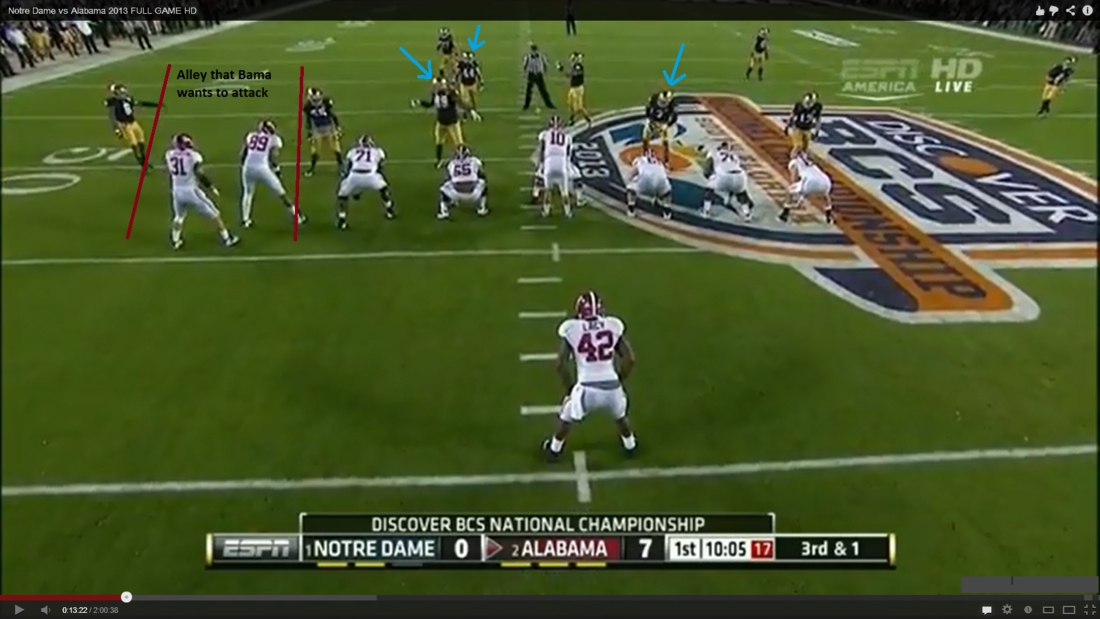 Alabama wants to attack the edge of the Notre Dame defense. They are going to try and run the ball in the alley labeled on the picture. Notre Dame has made an adjustment to their defensive line and are in a version of the 46 or bear alignment (old school coaches will call it a double eagle look). This look is similar to the defense made famous by Buddy Ryan and the 85 Chicago Bears. Basically it is a variation on the 3-4 defense. In a traditional 3-4 defense the defensive ends would line up over the offensive tackles. In this alignment the defensive ends Kapron Lewis Moore (#89) and Stephon Tuitt (#7) shift inside and line up over the offensive guards. You might notice that Notre Dame doesn't have a nose guard on this screen shot, Kona Schwenke (#96) is late getting on the field but he does get there eventually. Notre Dame has also shifted outside linebacker Prince Shembo (#55) down to take care of the gap between the tight end Michael Williams (#89) and tackle Cyrus Kouandjio (#71). 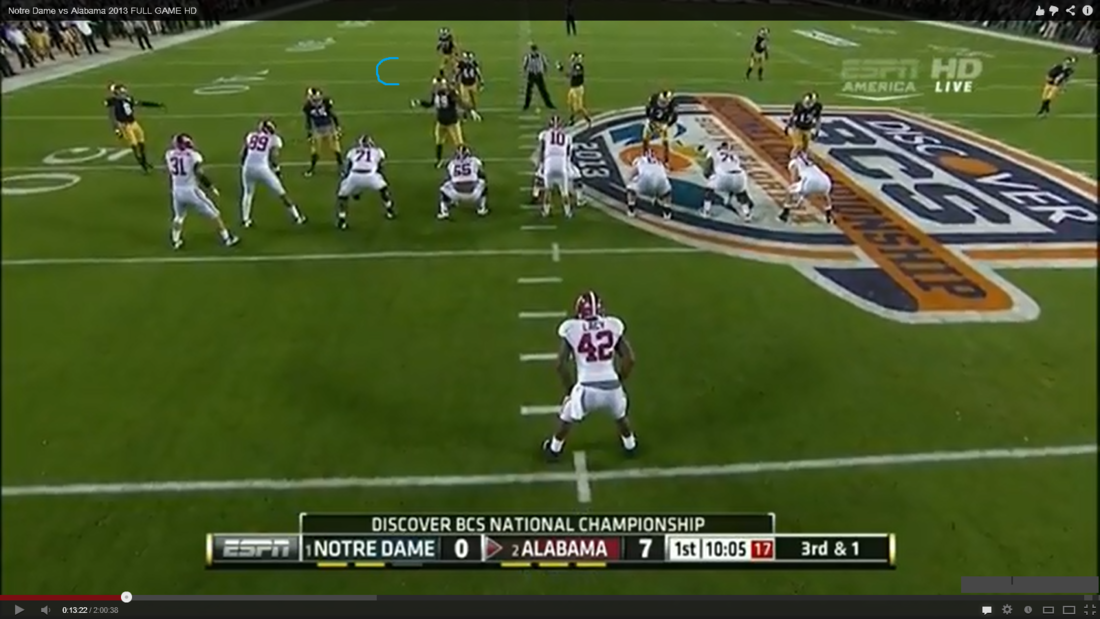 This is an example of an inside linebacker acting like a statue. Kapron Lewis-Moore is lined up over the guard, normally this is where Carlo Calabrese (#44) would line up ( 5 yards deep). Logic suggests that if Lewis-Moore lines up in this location, Calabrese should slide over to the location vacated by Lewis-Moore (marked by the C). The need to get an extra defender towards the outside of the formation is even more critical given that Alabama has brought an extra blocker, wingback Kelly Johnson (#31), to that side. For some reason Calabrese does not adjust. He stays in his usual inside alignment putting him in a poor position to make a tackle in the alley where Notre Dame is vulnerable. 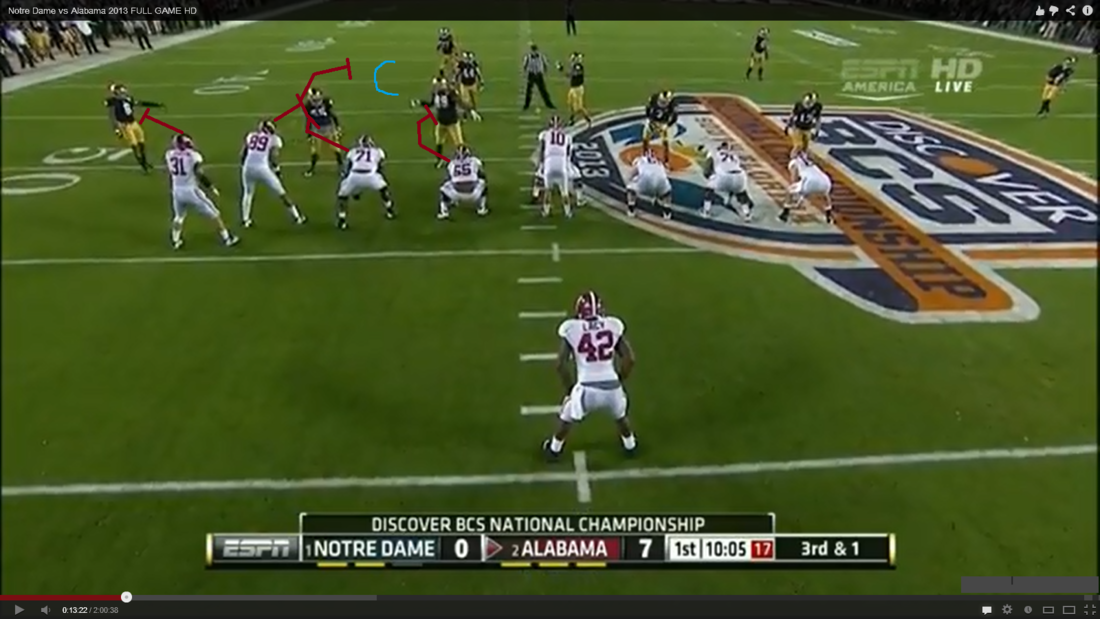 By maintaining his usual alignment, Calabrese makes life much easier for the tight end and tackle. With this alignment the tight end is able to double team Shembo and still has plenty of time to get off the block and seal Calabrese. If Calabrese lines up a little more to the outside (marked by the C), the tight end can't stay on Shembo as long and doesn't have as easy an angle to seal Calabrese. 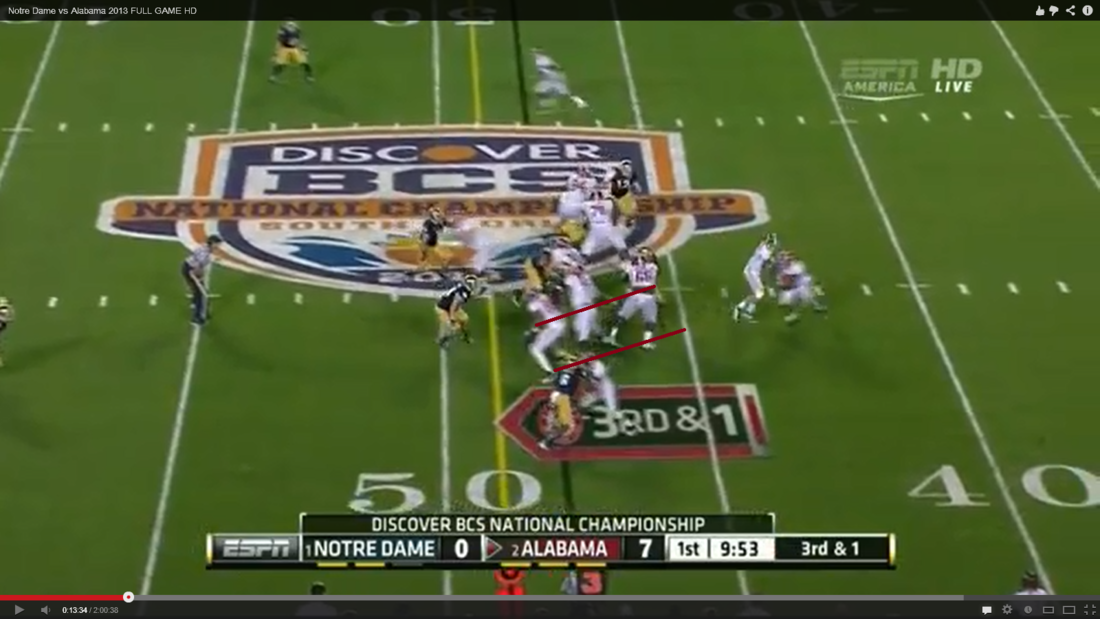 The alley is formed, Calabrese is about to get sealed, and Alabama is marching on a road of bones.

Let's take a look at another example of an Alabama formation with virtually no adjustment by the Notre Dame inside linebackers. 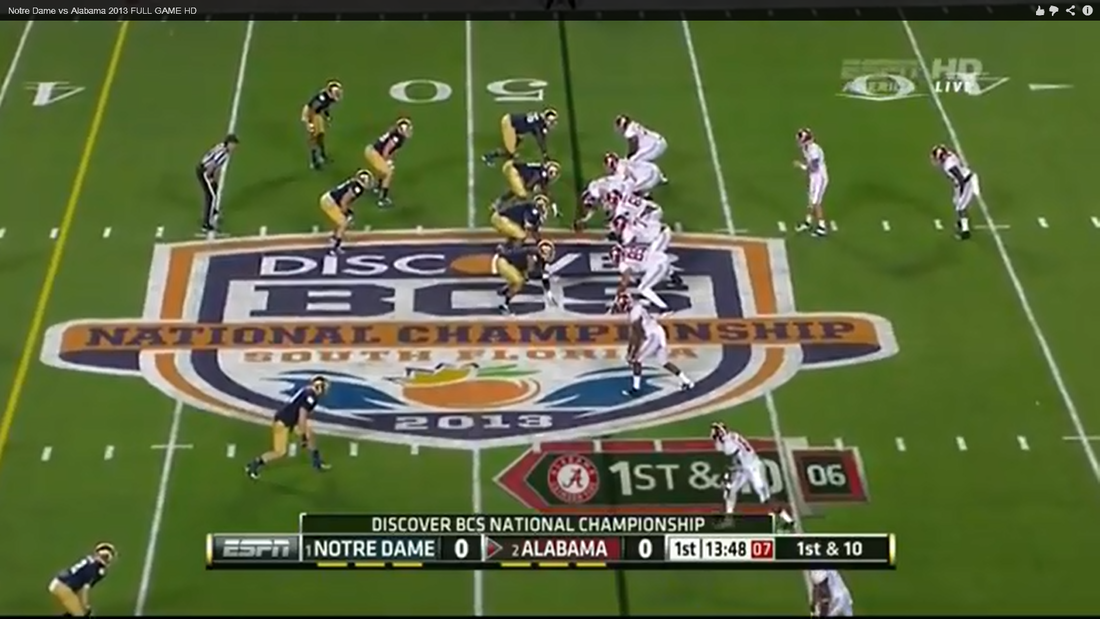 Notre Dame is in their 4-3 look with four down linemen and three linebackers, Danny Spond (#13), Manti Te'o (#5) and Dan Fox (#48). Alabama has put three receivers and a tight end to one side of the formation. This is a pretty obvious over load and should lead to an adjustment by the Irish defense. 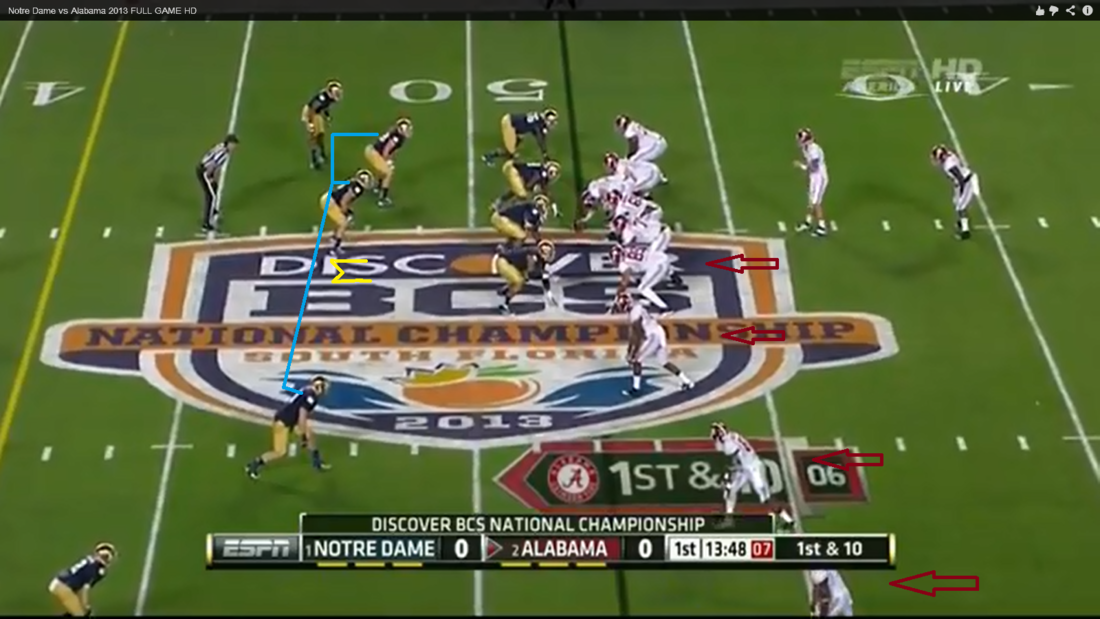 Oddly enough Manti Te'o doesn't adjust. Look at the way Notre Dame's linebackers are spaced. Can you guess where Alabama is going to run the ball? It makes no sense to have Te'o and Fox lined up that close together, especially when you consider that Alabama has extra blockers on the other side of the formation. Te'o should slide towards the extra blockers (at least to the location of the M, possibly more) 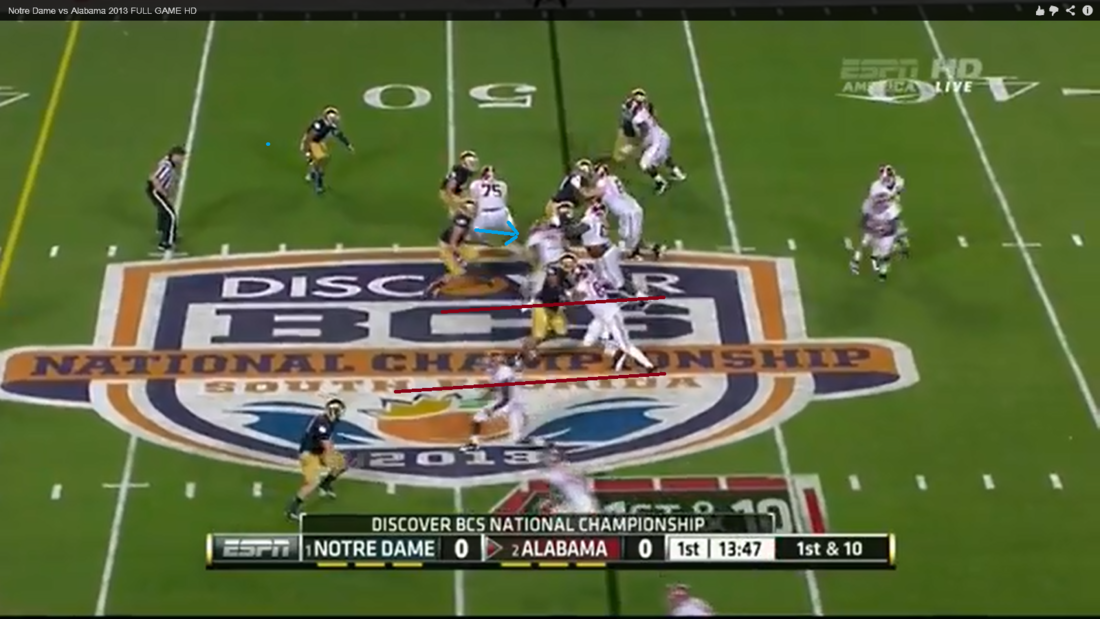 Post snap, Te'o has taken an angle that is too aggressive and will make it virtually impossible to get to the outside. Due to the formation, Danny Spond was so wide in his initial alignment that all Alabama receiver Marvin Shinn (#80) has to do is get in his way. Voila, once again you have a pretty clear alley slicing through the edge of the Notre Dame defense.

To say that the Irish game plan was too simple, ironically is a bit of an oversimplification. I believe that the Irish coaching staff created a defensive game plan that was relatively diverse and probably the most complex they used all year. The primary problem was not a poor game plan for the Irish. The Crimson Tide coaching staff did an excellent job of finding and exploiting a weakness in the Notre Dame defense. In this case, they saw that the Notre Dame linebackers tended to get locked into a pre- snap alignment and they used that flaw to create seams in the edge of the Irish defense.

Not to worry OFD readers, there is hope for the future. This staff has shown us that it learns very quickly. Don't be surprised to see a more active Notre Dame linebacking corps in the 2013 season. Did anyone else notice that Bill Belichick is at the coaching clinic this year?