Since the title game there has been plenty of speculation regarding why Alabama ran roughshod over the vaunted Notre Dame defense. Some believe that Alabama was simply more talented. Others feel that Notre Dame was out-coached. Some contend the Irish players simply weren't ready for the bright lights in South Beach. Any good hoser knows the best way to answer these questions is to do what the coaches do, break down the film. Let's get to it.

In this film session we will break down a play that illustrates how the Irish made things more difficult for themselves with poor pre-snap alignment. This play comes from the end of the first quarter, just before Alabama goes up 21-0. Alabama is 1st and goal from about the 6 yard line. Forcing a field goal here would stop the bleeding and provide the Irish with some much needed momentum. 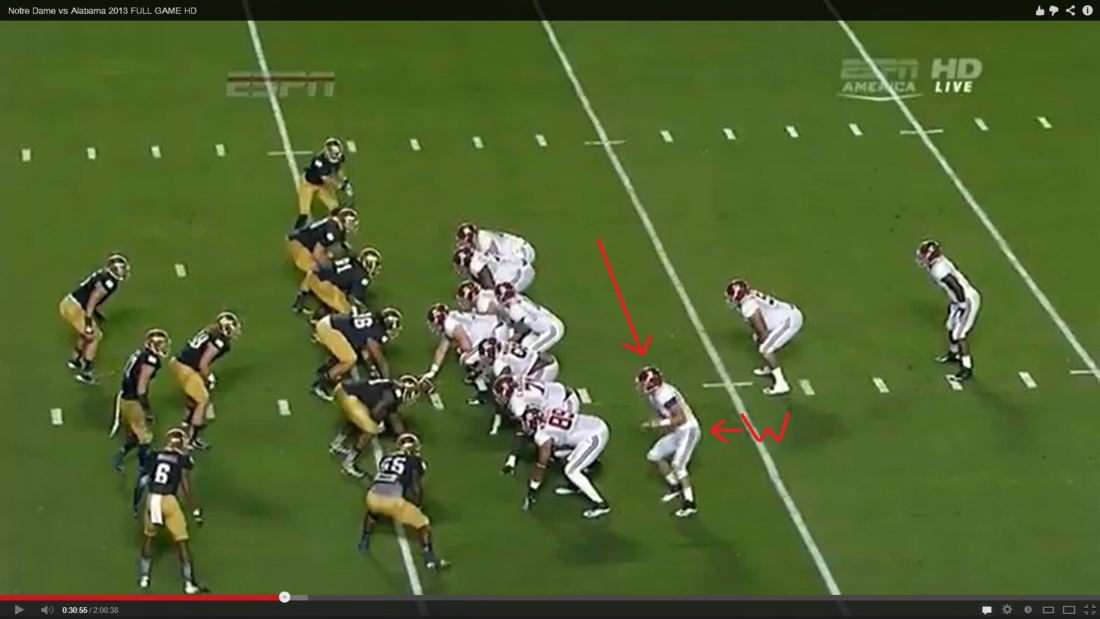 Alabama is in a power set, with 2 tight ends, a fullback (who also happens to be their nose guard) and a wingback who motions from the top of the formation to the location we see here. Alabama used this formation a number of times throughout the game and had excellent success with it.

Notre Dame is in their base 3-4 look. Since it is first and goal they have decided to sell out on the run and place 10 players in the box. When the wingback Kelly Johnson (#31) motions over, the Notre Dame defense must adjust by bringing an extra player to that side of the formation, otherwise the Irish D will get out-manned at the point of attack. Safety Zeke Motta (#17) is responsible for adjusting his alignment based on this formation. At first glance the adjustment seems reasonable and Notre Dame should be in good position to make a play. 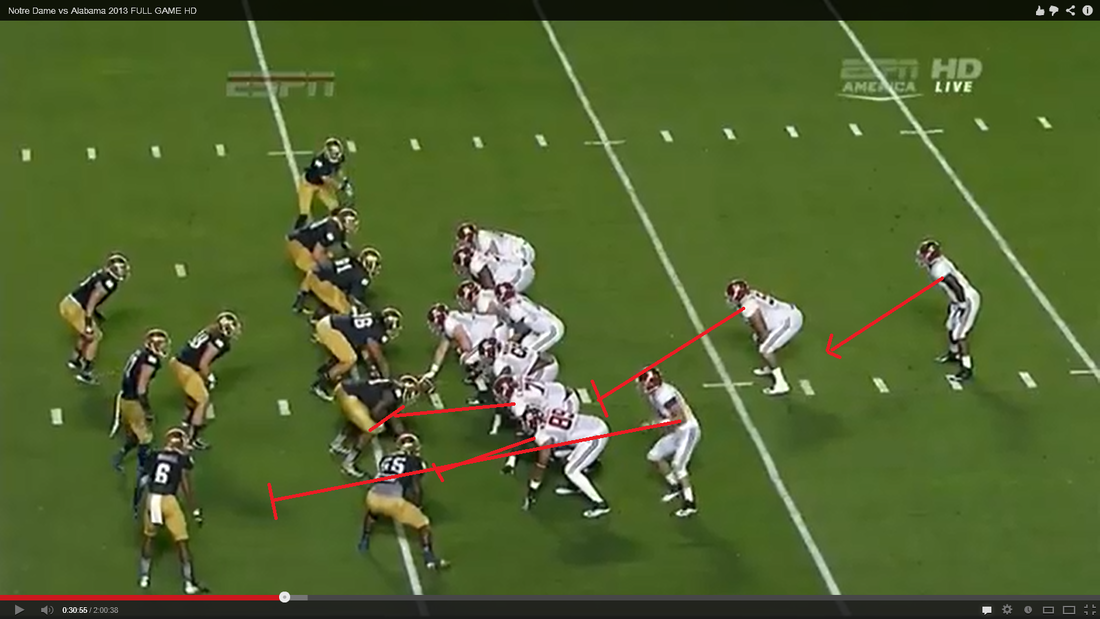 The plan for Alabama here is pretty simple, they are going to try and create an alley by having gargantuan offensive tackle Cyrus Kouandjio (#71) block down and seal the inside and tight end Michael Williams (#89) kick out and widen the edge of the defense. From there, the wingback and fullback (Jessie Williams #54) will take care of anyone who makes their way into the alley. That is some good old-fashioned power football folks. 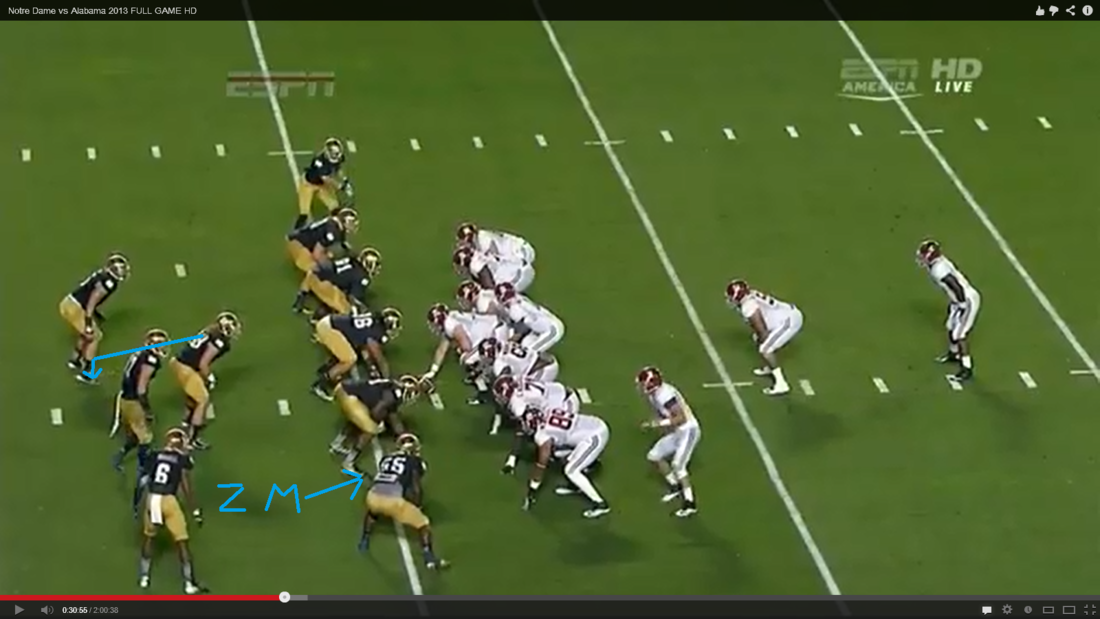 This is where things start to unravel for the Irish defense. First of all, Motta lines up too far inside and ends up right beside Dan Fox (#48). There is no reason for Motta to be in that alignment. We already have a linebacker (Fox) and a D-Lineman (Kapron Lewis-Moore - #89) in that area. Motta needs to recognize the formation and understand that Alabama has placed an extra blocker to the outside and therefore his alignment should be more to the outside, somewhere around the Z M.

Motta's error is exacerbated by the way Dan Fox is lined up. Even if Fox is blitzing, he is too close to the line of scrimmage. This limits his vision and makes him more susceptible to getting sealed inside. Ideally, Fox should be lined up at roughly the same depth as Manti Te'o (#5).

Even with this poor pre-snap alignment the Notre Dame D can still make a play. If outside linebacker Prince Shembo (#55) can attack the tight end and squeeze the edge and Motta takes an angle that attacks the gap between the tight end and tackle we should be in decent shape. 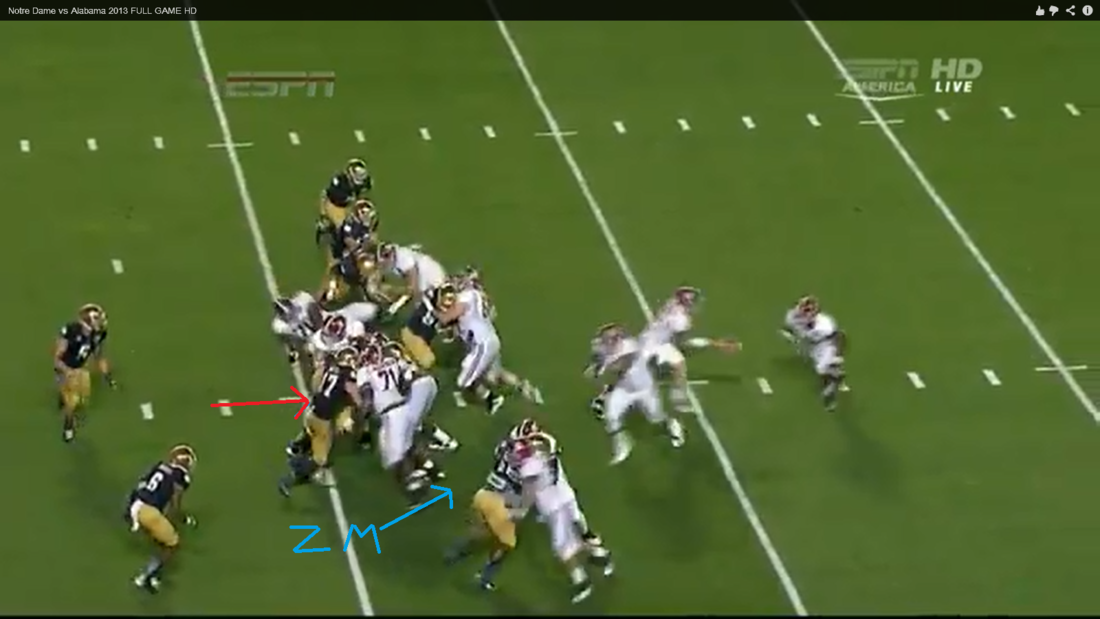 Motta inexplicably runs directly into the offensive tackle instead of filling the alley. This enables two Bama players to block three Notre Dame players - Motta, Lewis- Moore and Fox. I'm not a math wizard, but these numbers don't bode well for the Irish. The good news is we still have a chance to make a play with Manti Te'o and cornerback KeiVarae Russell (#6) in good position. 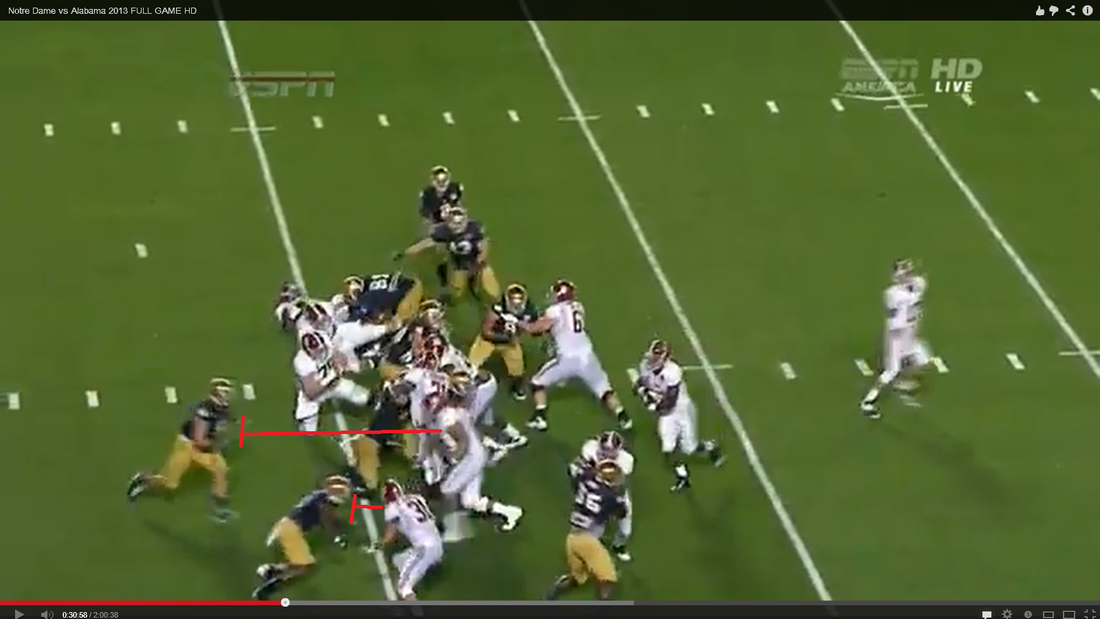 Bama's offensive tackle is like a Canadian grizzly bear, happily mauling Motta and Lewis-Moore like a moose carcass. Fox has been sealed inside. Shembo is holding his ground and setting the edge. Te'o is about to take on the fullback and KVR is going to be blocked by the wingback. Even though Motta and Lewis-Moore are being feasted upon, we can stuff this play if our All-American linebacker and freshman All-American corner can fill the alley. Regrettably, the video demonstrates that neither Te'o or Russell can get the job done. Fortunately, Shembo is able to get off his block and make a touchdown-saving tackle.

So what did we learn? From a coach's perspective, Notre Dame made a reasonable adjustment when the wingback motioned over by having Zeke Motta come into the box to play the run aggressively. The issue on this play wasn't X's and O's. It was that Motta lined up in the wrong spot, attacked a grizzly bear of a player who out-weighs him by 100 plus pounds, cut off the pursuit angle of two of his teammates and then got driven 10 yards down field into the end zone. Motta can't take all the blame for this play though. His mistakes were compounded by Fox lining up too close to the line of scrimmage and getting sealed inside along with Te'o and Russell failing to make a tackle in the alley.

This is exactly the sort of play that has led Coach Kelly to say things weren't as bad as he initially thought after the championship game. Yes, the Alabama players were very good on this play. However, if Notre Dame simply lines up correctly before the snap of the ball, this becomes a much more difficult play for Bama to execute and most likely isn't as successful.