Let's get a couple of things out of the way for all the Te'o critics out there. Yes he missed tackles during the NCG. Yes he took angles that were too aggressive. Yes, sometimes Alabama's players were just better than him. Let's also be clear on a couple of other points. Te'o is not a bad football player. Te'o is not a bad person. If you are looking to debate and analyze these issues this really isn't the article for you. If you are interested in digging a little deeper into how Alabama game planned for Manti Te'o then you might find something you like here.

As I have been reviewing the film these last few weeks, nuances of the Alabama game plan have started to come into focus. When I watched the first quarter some pretty clear themes started to emerge. I noticed that Alabama was attacking the "Te'o side" of the defense and the "non-Te'o" side in very different ways. To demonstrate this I charted all the plays Alabama ran in the first quarter (full disclosure, it is possible I missed one or two plays). I classified the run plays into three categories, run at Te'o, run away from Te'o, run up the middle. Alabama ran the ball 58% of the time away from Te'o and 17% of the time at Te'o. After the 4th play of the game, Alabama didn't run the ball at Te'o's side again until the second quarter. This doesn't mean that Alabama was trying to avoid Te'o. They still went after him. They simply used a more subtle approach when calling plays to his side of the field.

A good example of this subtlety was the way the Crimson Tide used play action to take advantage of Te'o's aggressive nature against the run. In the first quarter, 6 out of the 9 passing plays Alabama ran were play action passes. Each one of these plays were designed to confuse Te'o and make him question his pre and post snap reads. Let's go to the X's and Eh's and I'll show you what I mean. 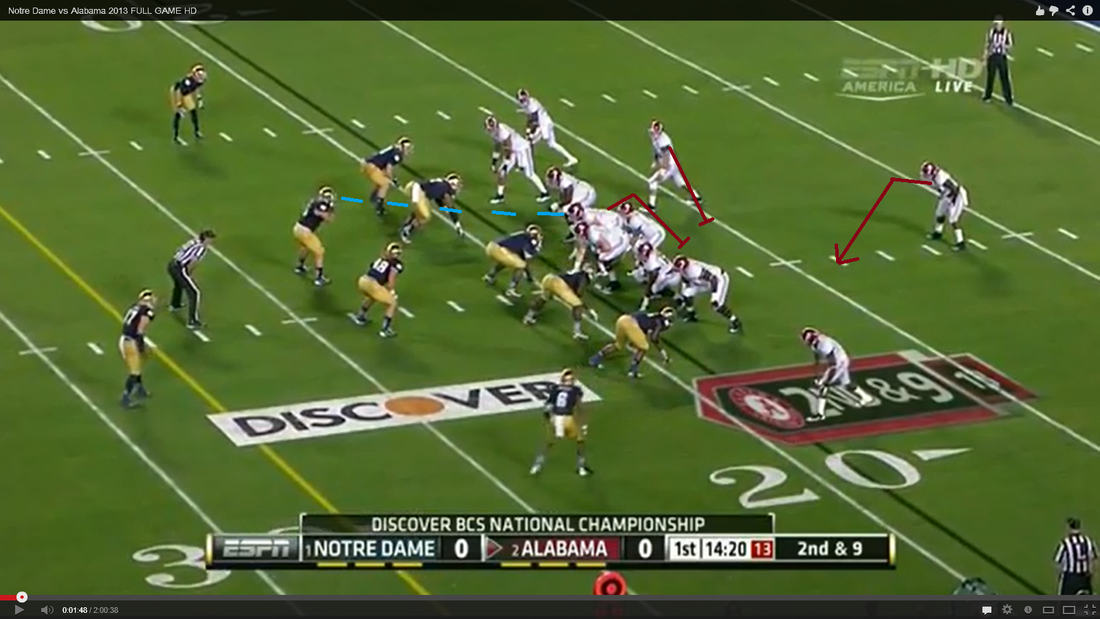 This is the second play of the game. Linebackers are usually taught to read through the offensive linemen to the running back. In this case Manti Te'o (# 5) will read through guard Anthony Steen (# 61) to running back Eddie Lacey (# 42). This play is designed to simulate a counter run play away from Te'o. Alabama is hoping that the combination of the guard pulling and good fake by Lacey and quarterback AJ McCarron (# 10) will trigger Te'o's instinct to attack. 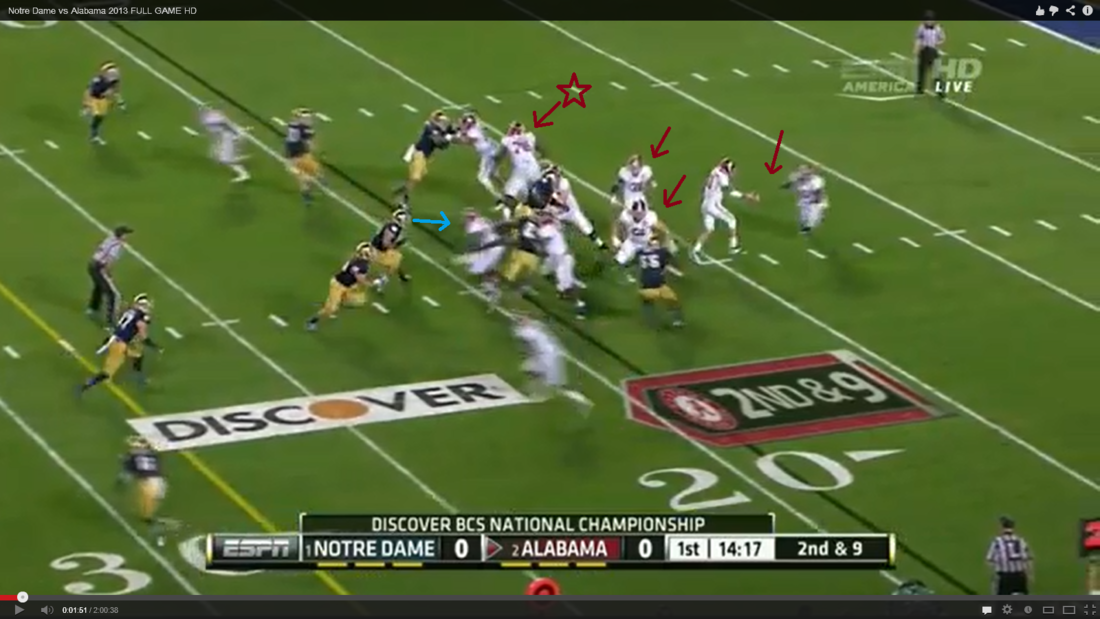 Alabama does an excellent job of selling the run and Te'o must follow the pulling guard. The only indication this play is not a run is offensive tackle DJ Fluker (# 76), he is pulling in the opposite direction of the run fake. The tackle is not Te'o's primary read (the guard is) so it is understandable that Te'o would not pick up on this.

Alabama's success on this play is not a result of a mistake by Te'o. The primary blame lies with Bennett Jackson (#2) and Matthias Farely (# 41). Jackson needs to stop staring in the backfield and read his keys while Farley needs to close on the receiver when the ball is in the air. So why include this play in an article about Te'o? It illustrates how the Crimson Tide used play action to confuse Te'o. This play is designed to plant a seed of doubt in his mind and cause him to question his reads.

Let's take a look at another play action pass. 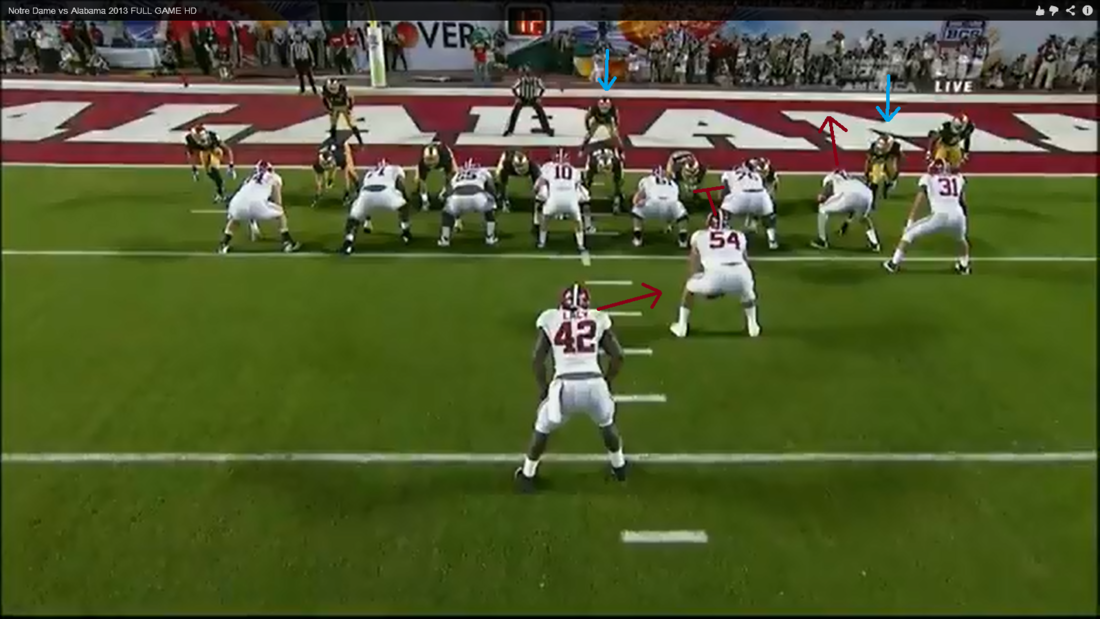 This is the play where Alabama scores their second touchdown. Let's remember the context. Alabama has been running this wingback formation away from Te'o and pounding the ball. In the back of his mind Te'o must be thinking, finally, run the ball over here. Of course Alabama is hoping for exactly that reaction. They are going to fake the run with Lacey and pass it to tight end Michael Williams (# 89). I can't say for sure who is responsible for covering the tight end in this defense, however it appears that it is either Te'o or Farley. Based on alignment and stance Farely seems to be blitzing , which would leave Te'o responsible for the tight end. It is a pretty tall order to ask Te'o to play the run and cover the tight end in this situation. 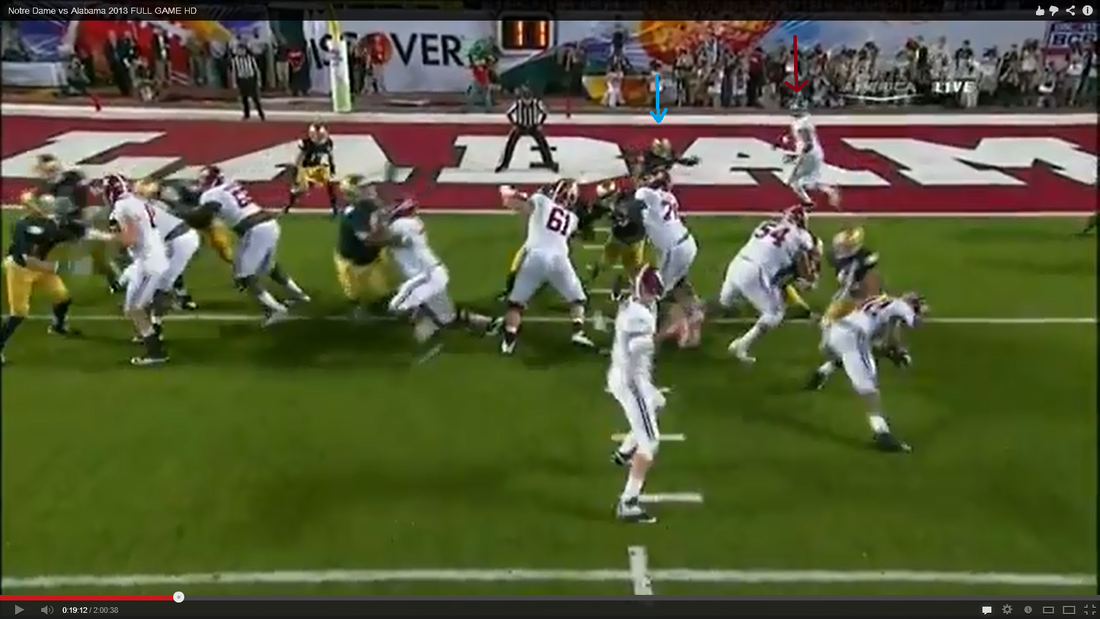 Te'o recognizes the play too late. Turn out the lights, the party's over.

When you watch the video of this play, notice the play action fake between Lacey and McCarron, isn't very good. However the design and timing of this play call was so good, the fake really didn't matter.

This final play is an example of how Alabama used the run game to put Te'o in a tough spot. 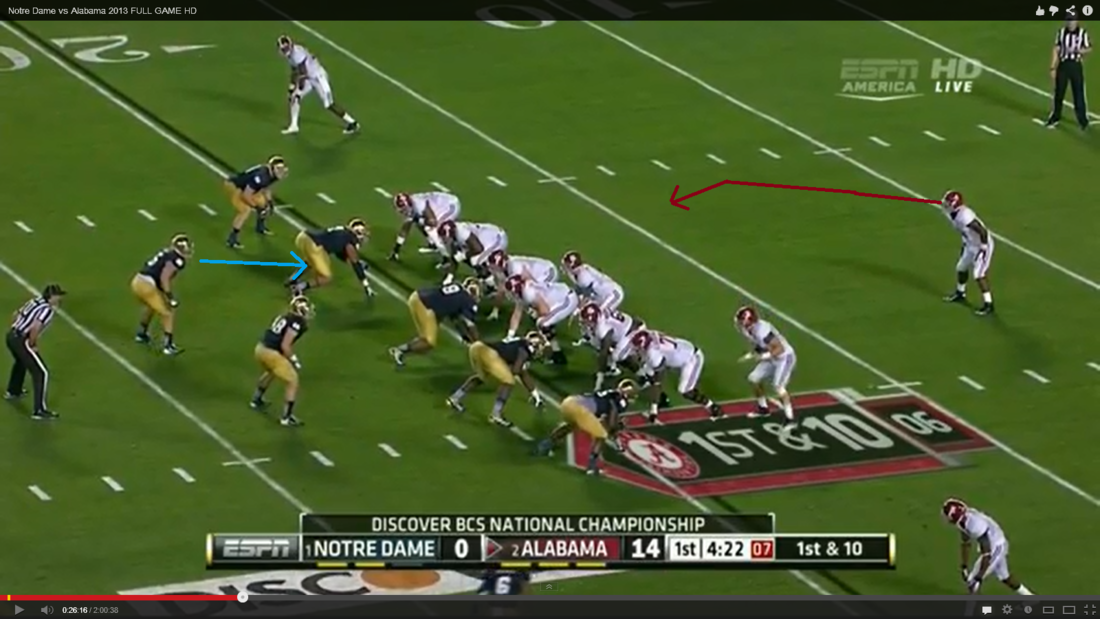 Well we've seen this formation before. Typically we see a run play to the side where wingback Kelly Johnson (# 31) lines up. On this play Alabama adds a slight variation. Instead of running back T.J. Yeldon (# 4) taking a path towards the wingback, he will start his path away from the wingback. This will force Te'o to step up in the direction of the blue arrow. 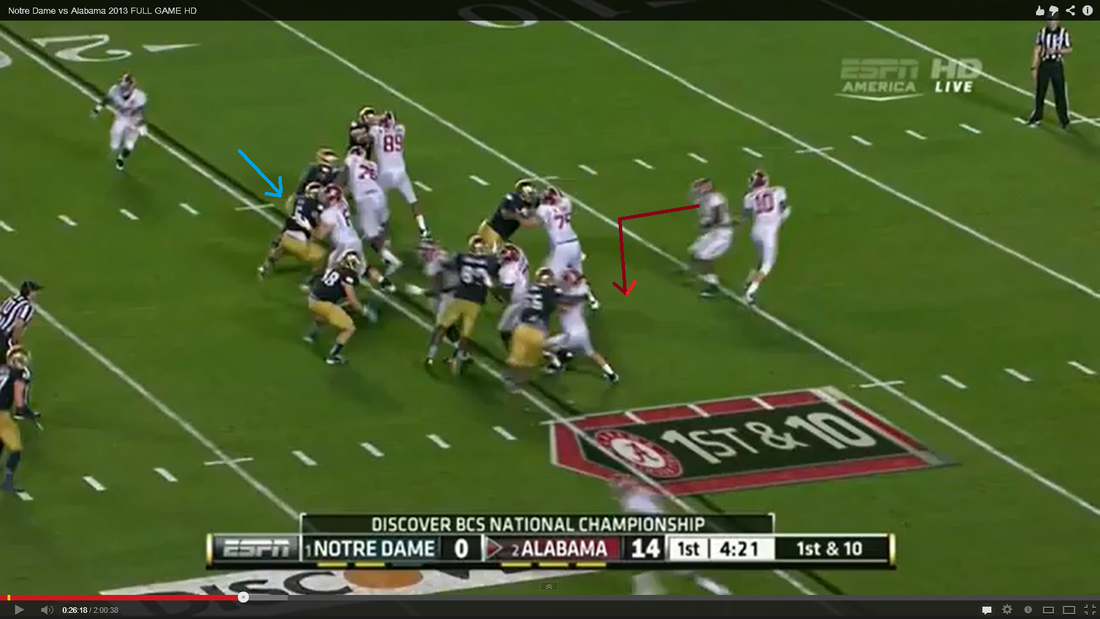 Yeldon will get as close to the offensive line as possible before making his cut. This forces Te'o to commit to filling a gap and allows the offensive line to get their paws on him. As Te'o is being mauled, Yeldon can make a cut and find an opening. This style of play is designed to punish defensive players for being aggressive against the run. 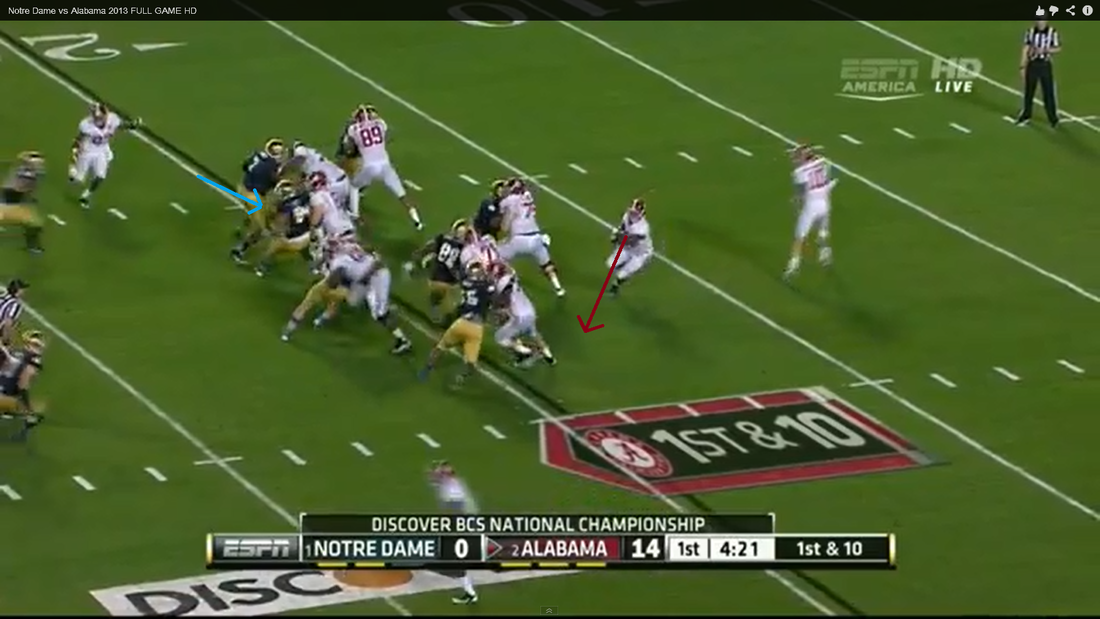 Te'o is working to get off the block, but he is too far away to get to the play in time. Zeke Motta (# 17) will end up unblocked and one on one with Yeldon.... did I mention Zeke had a tough night?

This is a really well designed play. Te'o has to fill a gap in case Yeldon stays on his original path. Unfortunately, as soon as he does this he get's swallowed by the Tsunami that was the Tide offensive line.

I believe that the Crimson Tide planned specifically to minimize the impact Te'o would have on the game, particularly in the early stages. Alabama called plays that were designed to confuse Te'o and take advantage of his desire to stop the run. A tip of the cap to the Alabama coaching staff, they really did a nice job of keeping Te'o and the entire Irish defense off balance with their play calling.