How big of a legacy can Jack Coan leave? Irish fans all around the country are curious about Coan heading into this season. Irish quarterbacks are one of the most focused on players in college football with many of them leaving a HUGE legacy such as Brady Quinn to Ian Book.

Coan will leave a big impact right off the bat, due to the fact that Notre dame has never started a transfer QB EVER. Coan has one year left but many Irish fans are believing he could add an extra year of eligibility. With one or two seasons left, Coan can leave a lasting legacy with his play on the field. His former teammates at Wisconsin's even had shirts that said "Jacky Heisman." 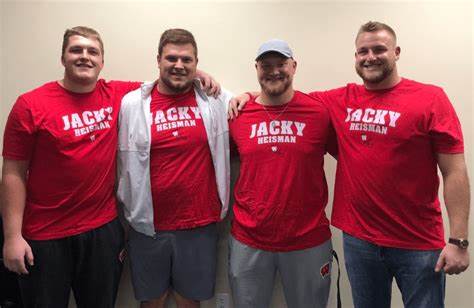 Coan threw for 2727 yards in his junior campaign as the Wisconsin Badgers went 10-4 and a Rose Bowl appearance. Signs are point up for Jack Coan to lead the Irish out the huddle on September 5th against Florida State. If "Jacky Heisman" comes to life and slings the ball Coan should leave a huge legacy at Notre Dame.

The obvious answer is if Jack Coan leads them to the playoff or wins a Heisman he will leave of the biggest legacies in Notre Dame football history. The question for Coan turns into, what transfer will he be? Will he be a Joe Burrow and light the world on fire or will he be Tate Martell who has transferred for his 3rd time now. The expectation is not for Coan to be Joe Burrow and win the Heisman, win the Nation Championship, and go first overall in the draft. Burrow is the ceiling, and with Notre Dame never starting a transfer QB there is no baseline to judge him off of.

Coan will leave a legacy, no matter good or bad. Coan takes the snap under center after the Irish went to the playoff and graduated the winningest quarterback in school history. One of the biggest problems, Coan faces is Drew Pyne. Pyne is a 4 star pocket passer out of New Canaan, Connecticut, he redshirted last year but saw action later in the year. Pyne could take the job over at any point throughout the year based off of Coan's on-field performance, which then Coan would not leave a legacy at Notre Dame.