The red zone... this is where we separate the wheat from the chaff

For the past two weeks you've been the starting quarterback for the Notre Dame Fighting Irish (Pt 1 & Pt 2). You've done well so far, but the pressure is about to ratchet up a notch. The situation remains the same, your team is down by three scores, there is under a minute in the half and you need points. You've got the team into field goal range, but you really need a touchdown. You're in the red zone. This is where we separate the men from the boys. Let's take a look at the film and see how you do. 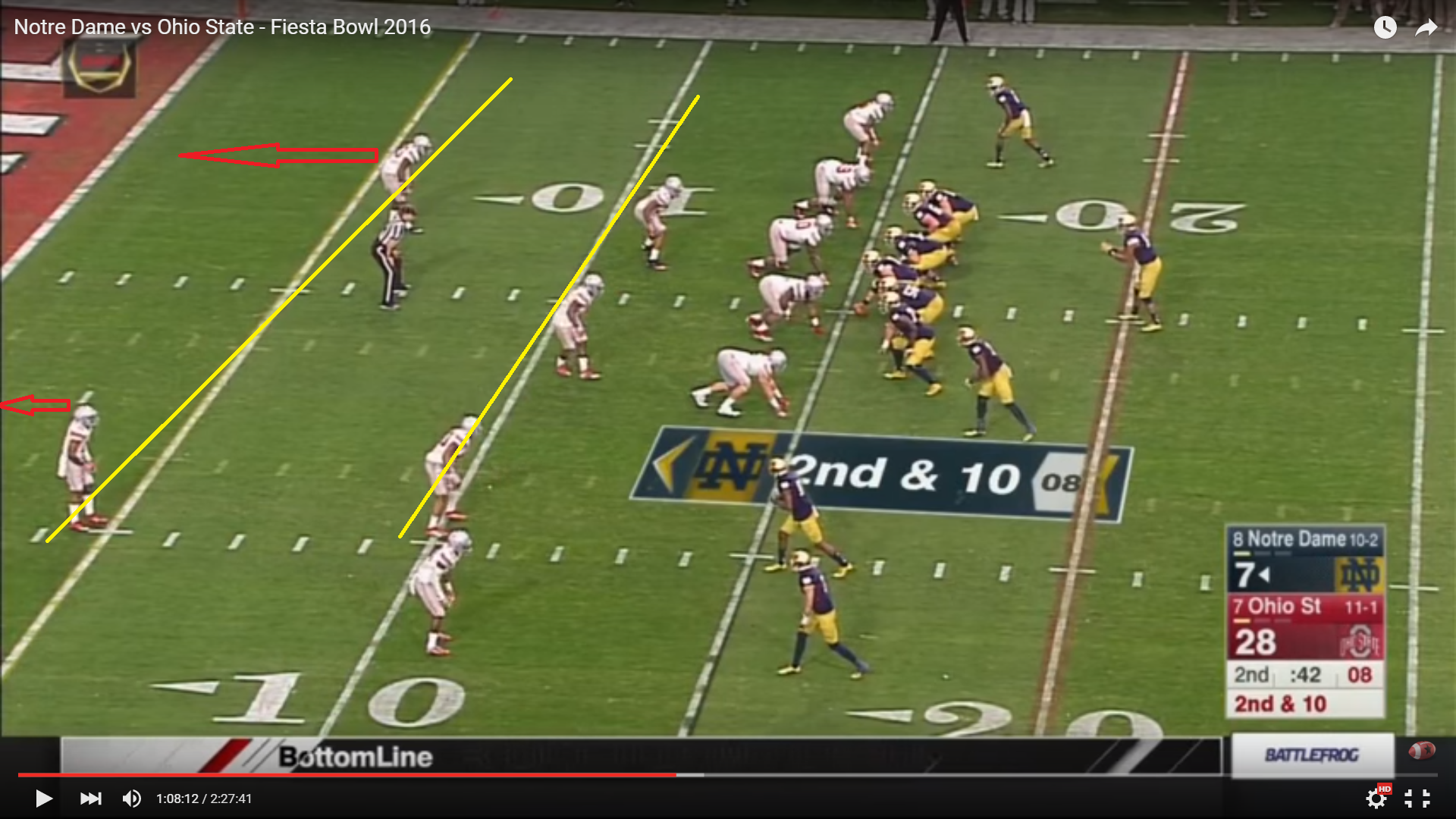 Before we get into the actual play call, you need to understand the situation. The ball is on the 15 yard line, you're in the red zone (or any other variety of strange footballcentric terms your coach may have created to represent the space on the field from the 20 yard line in). This is where it gets difficult. As the offense approaches the end zone, the amount of field they have to work with shrinks. For example, from the 40 yard line, an offense has roughly 50 yards of field to work with. From the 15, the offense has only 25 yards to the back of the end zone. The amount of space the offense has to work with shrinks, but the number of defenders stays the same. As a result, the defense has the same number of players defending less territory.

From the 40 yard line, you can run plays that stretch the defense vertically (red arrows), which creates a void between the deep coverage and underneath coverage (yellow lines). In the red zone you don't have this luxury. The deep coverage only has to cover to the back of the end zone, so they don't get stretched vertically. Therefore, the void between deep and underneath coverage isn't as pronounced. Consequently, quarterbacks need to make accurate, high velocity throws to fit the ball into tight windows, rather than working through multi-layered read progressions.

In short, you are going to need to make a throw into traffic against one of the most talented defenses in the country. 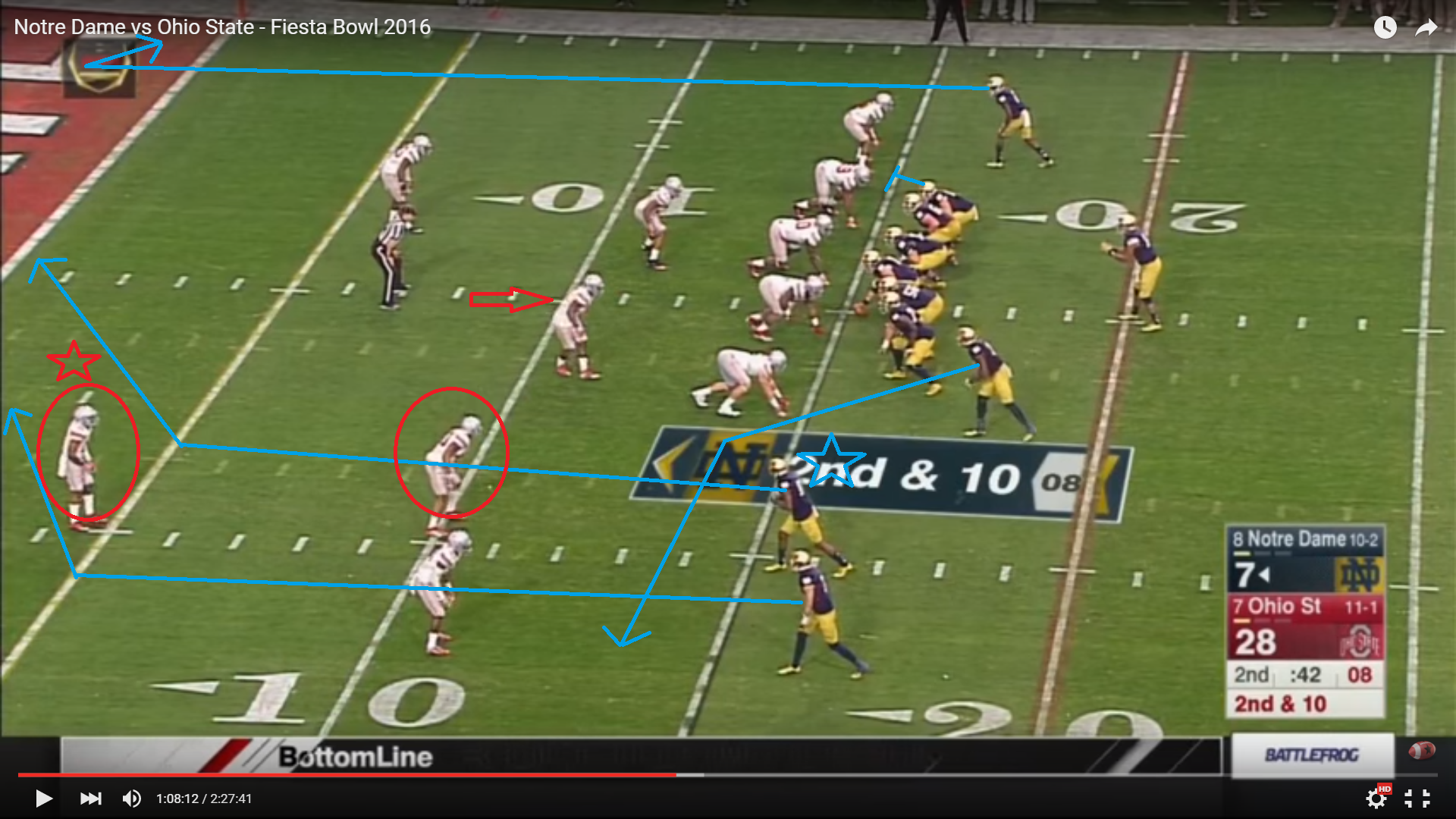 These patterns are designed to work primarily against man coverage (blue lines), note the tight end will stay in to provide extra blocking. The primary receiver is going to be the slot receiver (blue star).

The key to this play will be how the circled defenders (red circles) react. The safety is especially important (red star). If he stays to the outside, you have a chance to complete the pass. If he moves to the inside, you won't. It's also important to keep an eye on the linebacker (red arrow) as he could conceivably drop into the throwing lane and cause issues. 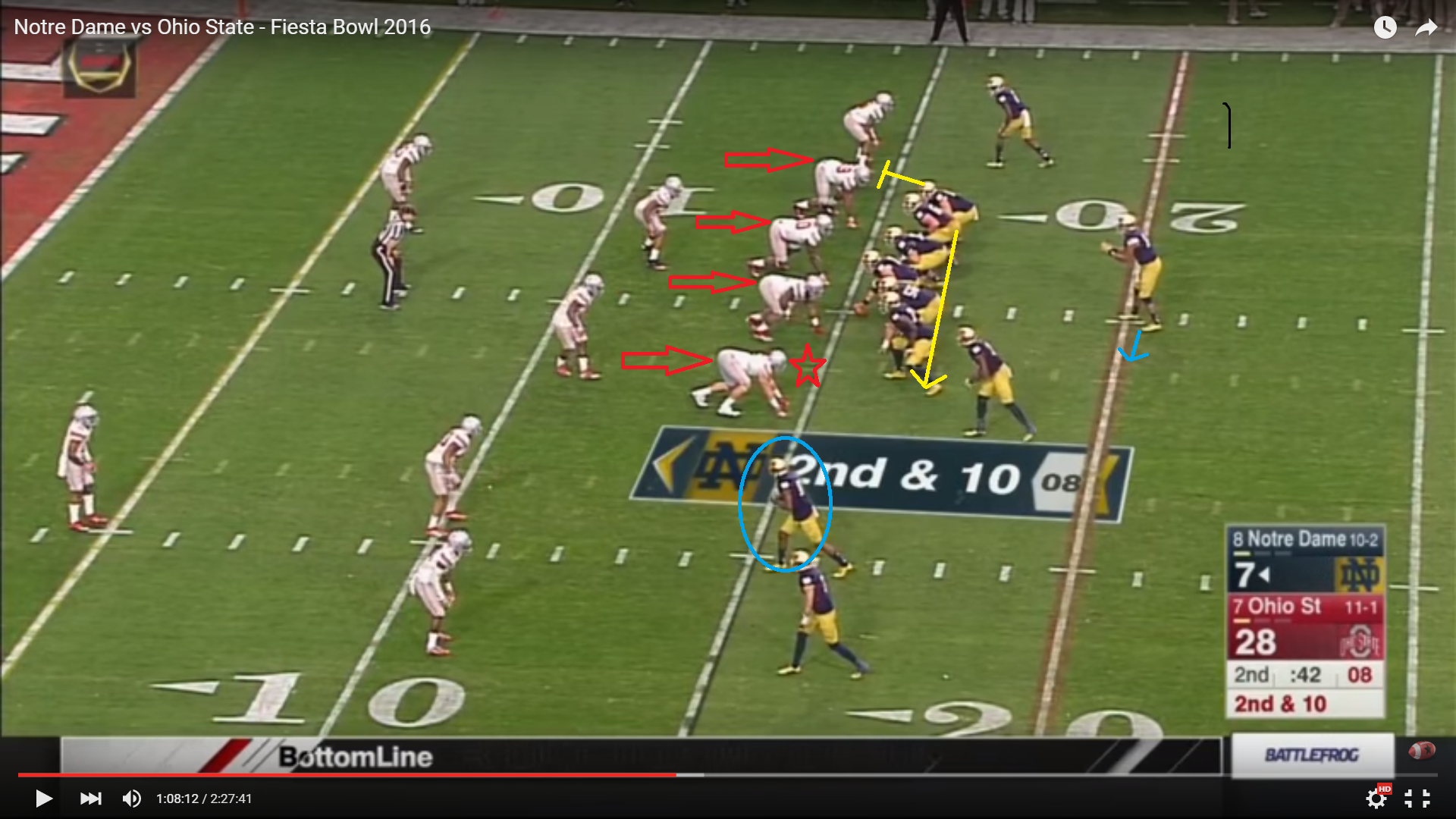 As always, before you snap the ball you need to set the protection. The primary receiver will be the slot (blue circle) to your left. Ohio State is going to rush 4, however the left defensive end (red star) is lined up wide and will be difficult to block with traditional pass blocking technique. As a result the offensive line will slide to the left (yellow arrow). This will help to neutralize the wide defensive end and hopefully provide you with a better throwing lane.

Note the mismatch with the tight end to your right (yellow lines) he will likely be tasked with blocking a defensive end one on one. This is something to keep in the back of your mind as the play progresses. Tight ends aren't as proficient in pass blocking, so you probably aren't going to have a whole bunch of time to make a decision if the first read isn't there. 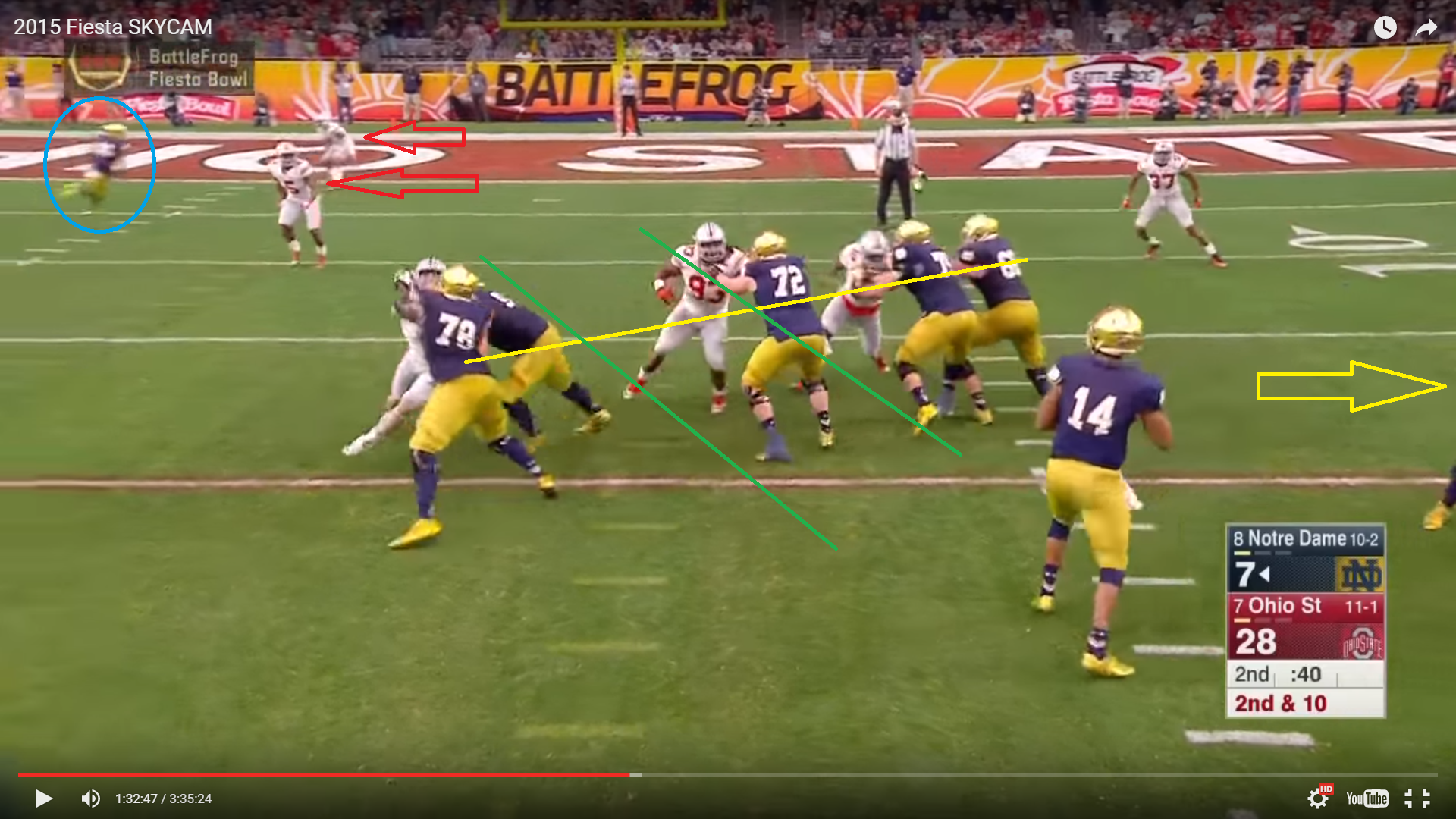 A fraction of a second after the snap. The offensive line has moved to the left. They've created a virtual Berlin Wall of pass blocking in front of you (yellow line) and opened up a nice throwing lane (green lines).  Keep in mind the mismatch to your right (yellow arrow) it won't be long until you have a defensive end breathing down your neck.

You look to your first read (blue circle) and realize he's covered, by two defenders (red arrows).  What are you going to do? Better make a decision quick, the pass rush is coming. 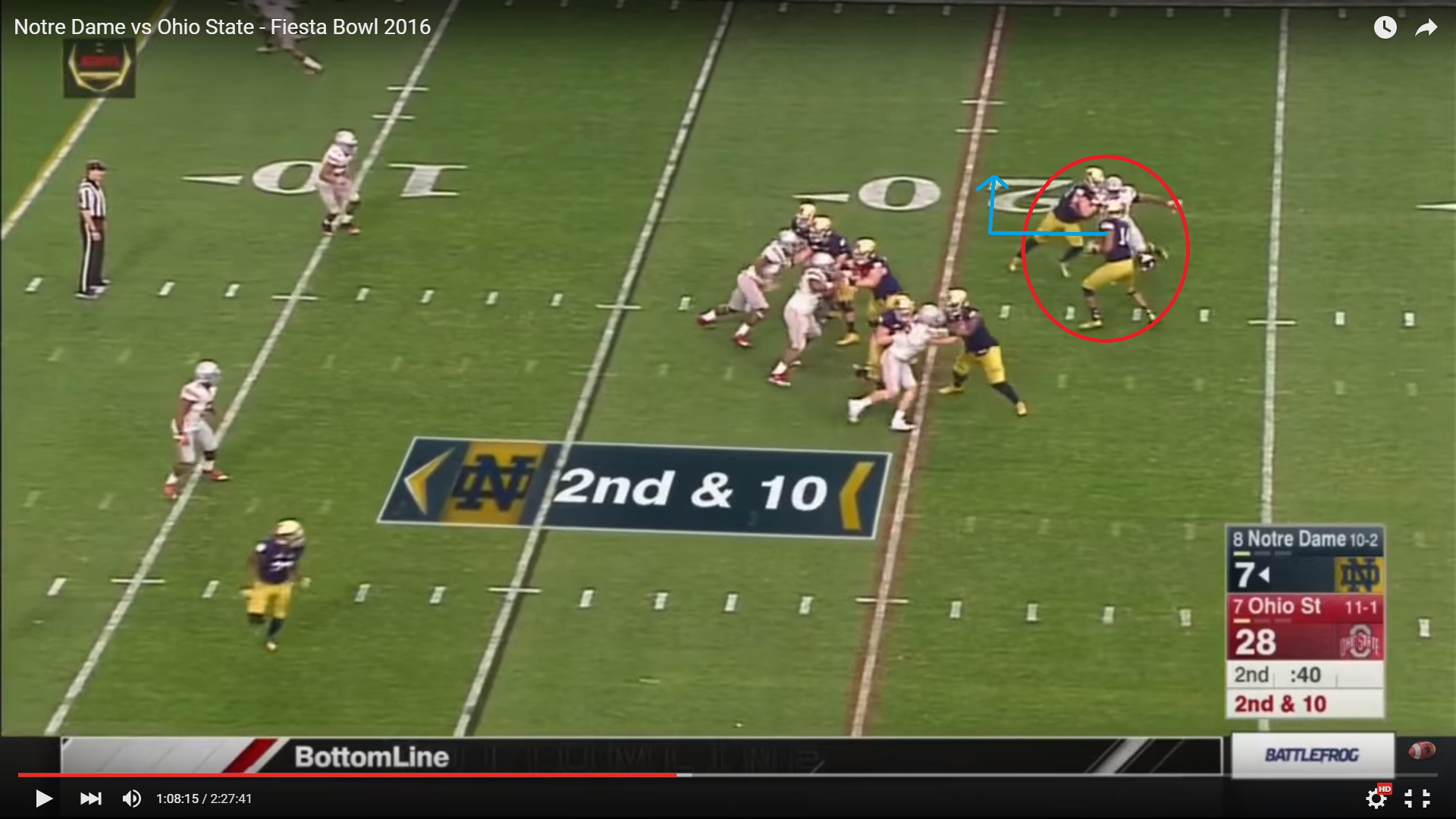 Bzzzz... you've run out of time. As you suspected, the defensive end beat your tight end (red circle). You don't have time to make another read. You need to move up into the pocket and find some open space (blue arrow). 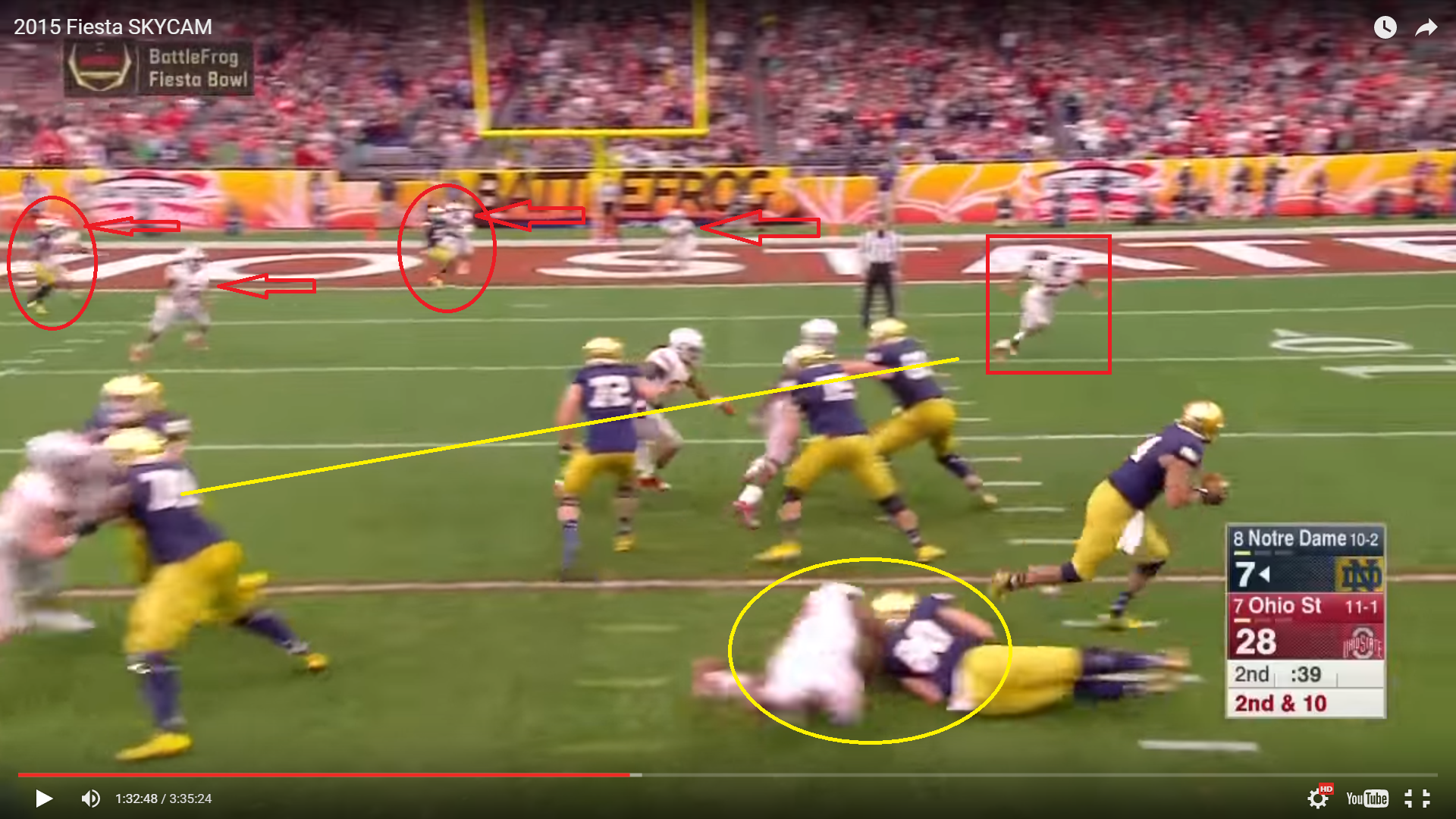 You did a good job of getting away from the pass rush and you've found some open space. The Berlin Wall of pass blocking remains intact (yellow line) and your tight end was able to get the defensive end to the ground.

Take a look at the receivers running patterns on the left side of the formation (red circles). Both are essentially double covered (red arrows). This illustrates the challenges associated with making throws in the red zone. The defense has the same number of defenders covering less space, so there is very little room to throw.

The good news is you got away from the pass rush. The bad news is you have the apex predator of the football world coming at you, a linebacker (red box). It is widely understood in football circles that linebackers are at the top of the food chain. Fast, strong, powerful, explosive, intelligent and under their helmets stunningly handsome, linebackers are merciless tackling machines that are feared by all. As a side note, I used to play linebacker. I'm not sure why I felt compelled to mention that now... 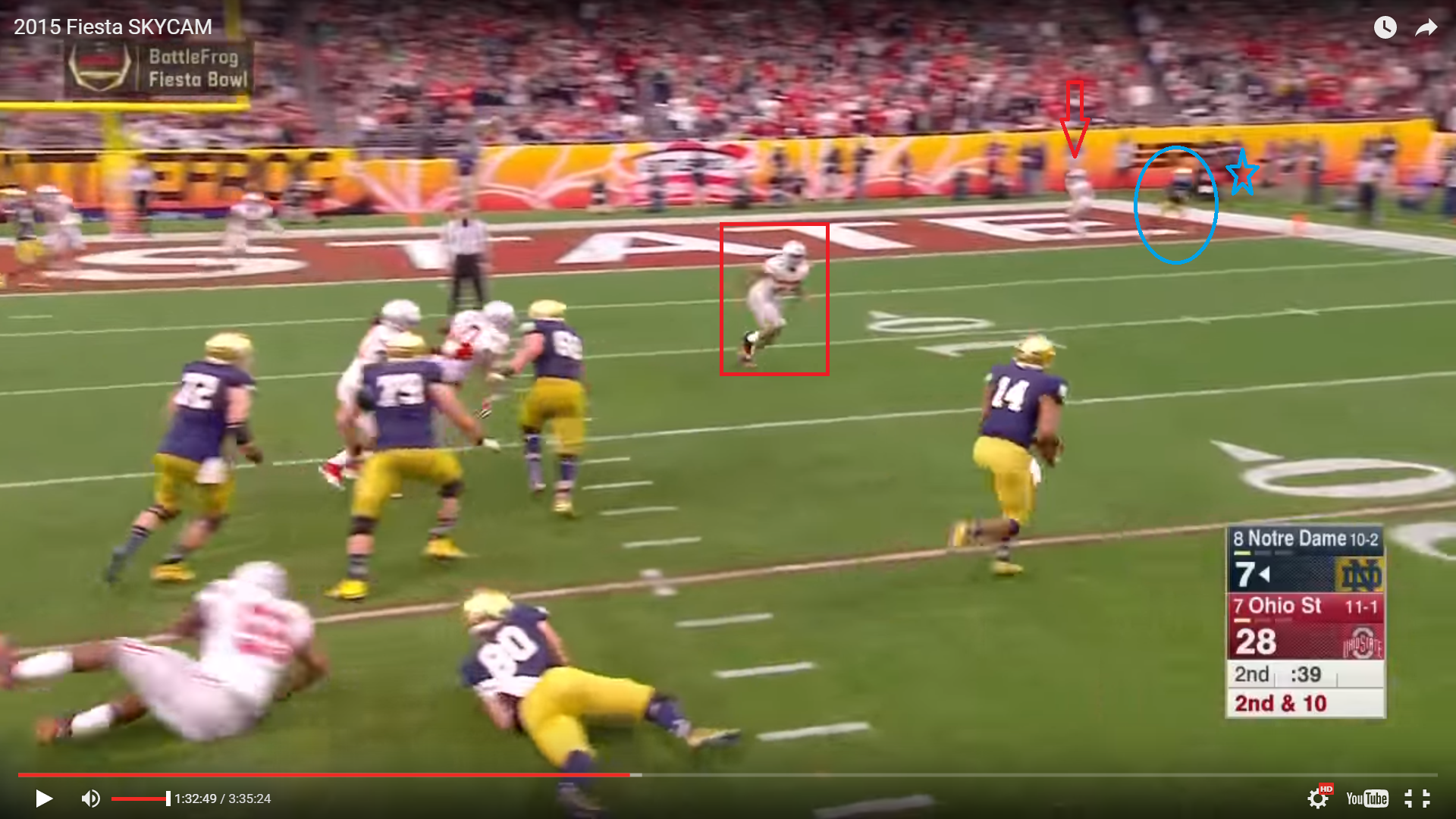 Another decision to make. Do you try and throw the ball to the receiver (blue circle) or run? The corner is in good position (red arrow) and ready to break, so you would have to put the ball in a place where only your guy can make the catch (blue star). The question is... can you make an accurate throw on the run?

Of course your other option really isn't an option. You could try and run, but you would be facing God's perfect tackling machine (a linebacker) in the open field (red box). Probably best just to throw it away and live to fight another play. 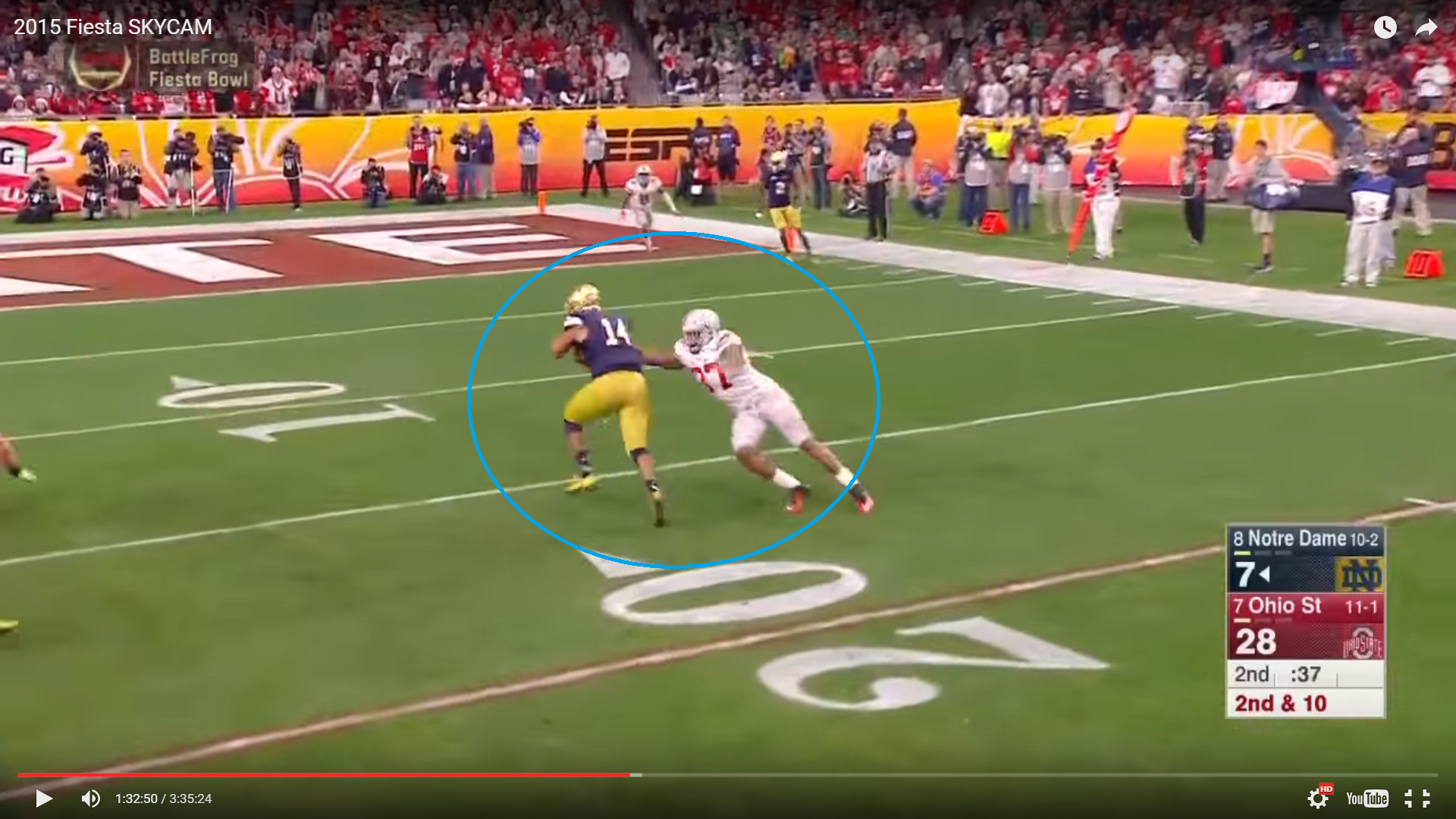 Or not. Wow, you decided to tuck it and run. Even more impressive you just beat a linebacker one on one in the open field (blue circle). Nice work. 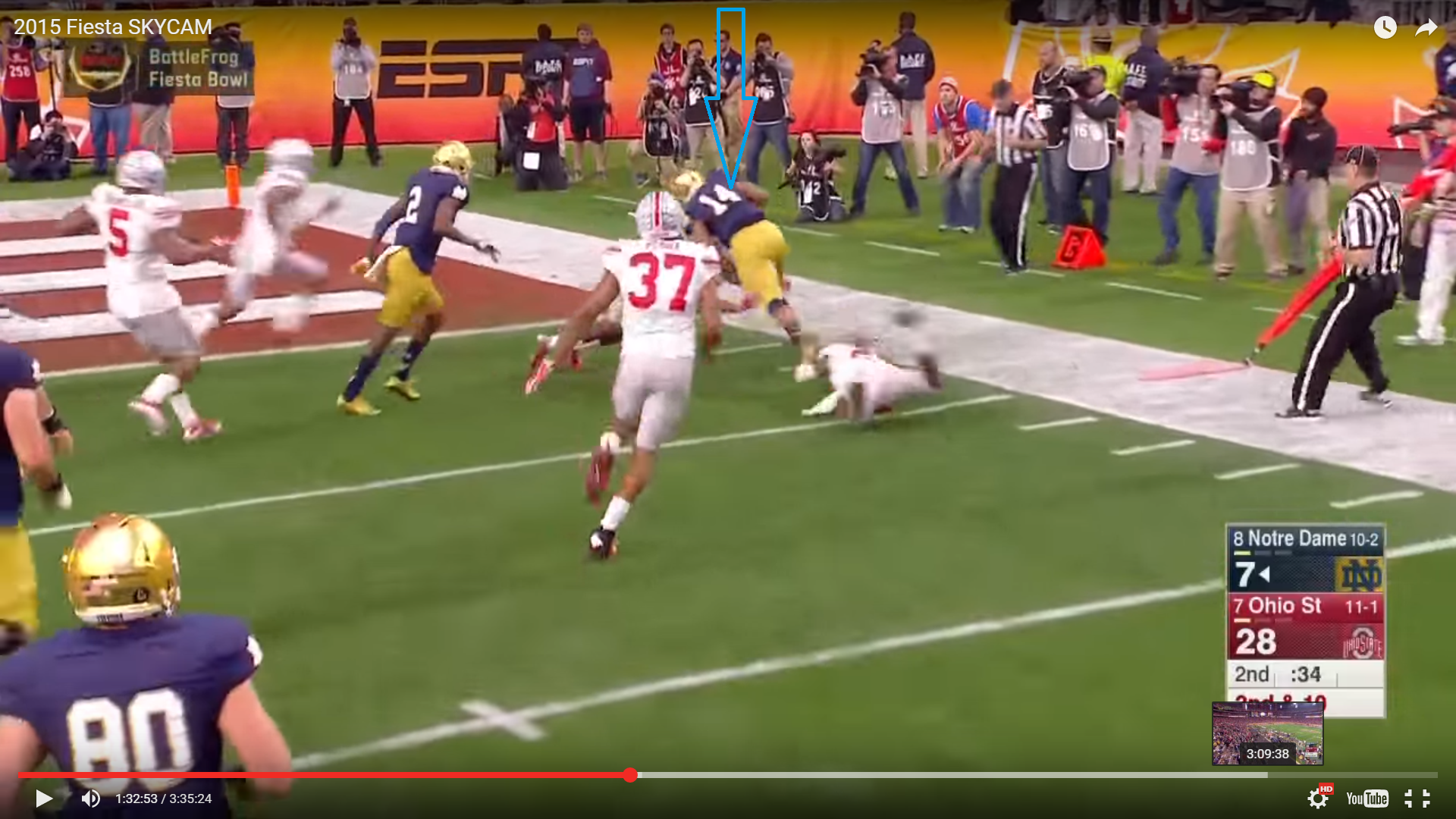 Now it's time to try and get to the end zone. There are no decisions to be made here. Simply put your pads down (blue arrow) and try to get two more yards.

Well done. Although, you didn't score, you got your team into prime position to put a touchdown on the board (which happened on the next play). More importantly, you made a good decision and didn't force the ball into a bad location. Even better, you tucked it, ran and made a nice move in the open field. This is why you are the starting quarterback for Notre Dame. You make big plays in pressure situations.