It's still a different world when you are the quarterback

In part one of this series you got to be the starting quarterback for the Notre Dame Fighting Irish. You did a good job, so we're going to keep you around for another play. The situation hasn't changed. Your team is down by three scores, there is under a minute in the half and you need to put points on the board. The pressure is on. Let's go to the film and see if you can handle it or if you crumple like a tourist being trampled by an angry moose. 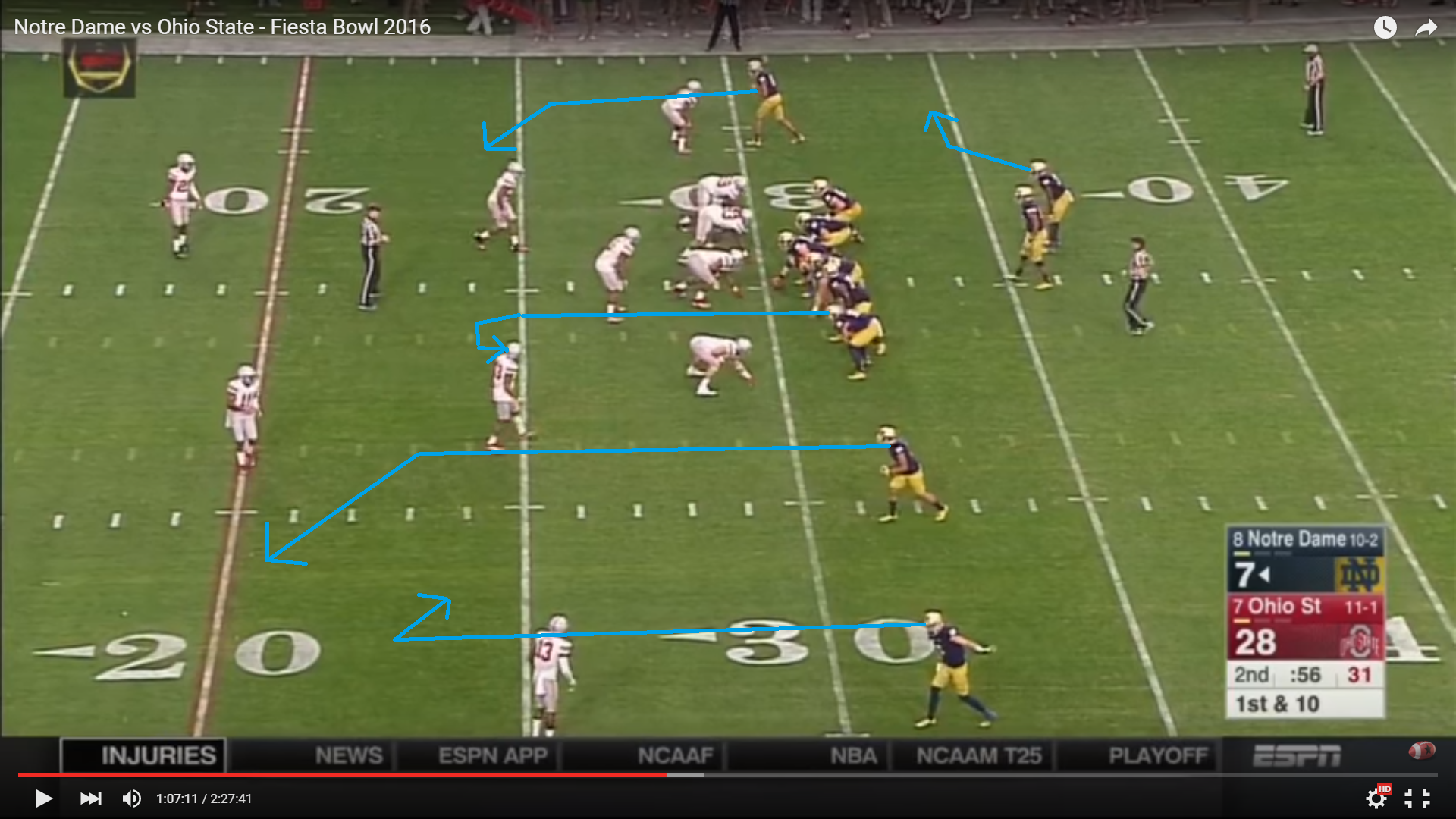 1st and 10, 56 seconds left in the half. The coaches have called a play that will give you a number of options depending on the coverage (blue lines). 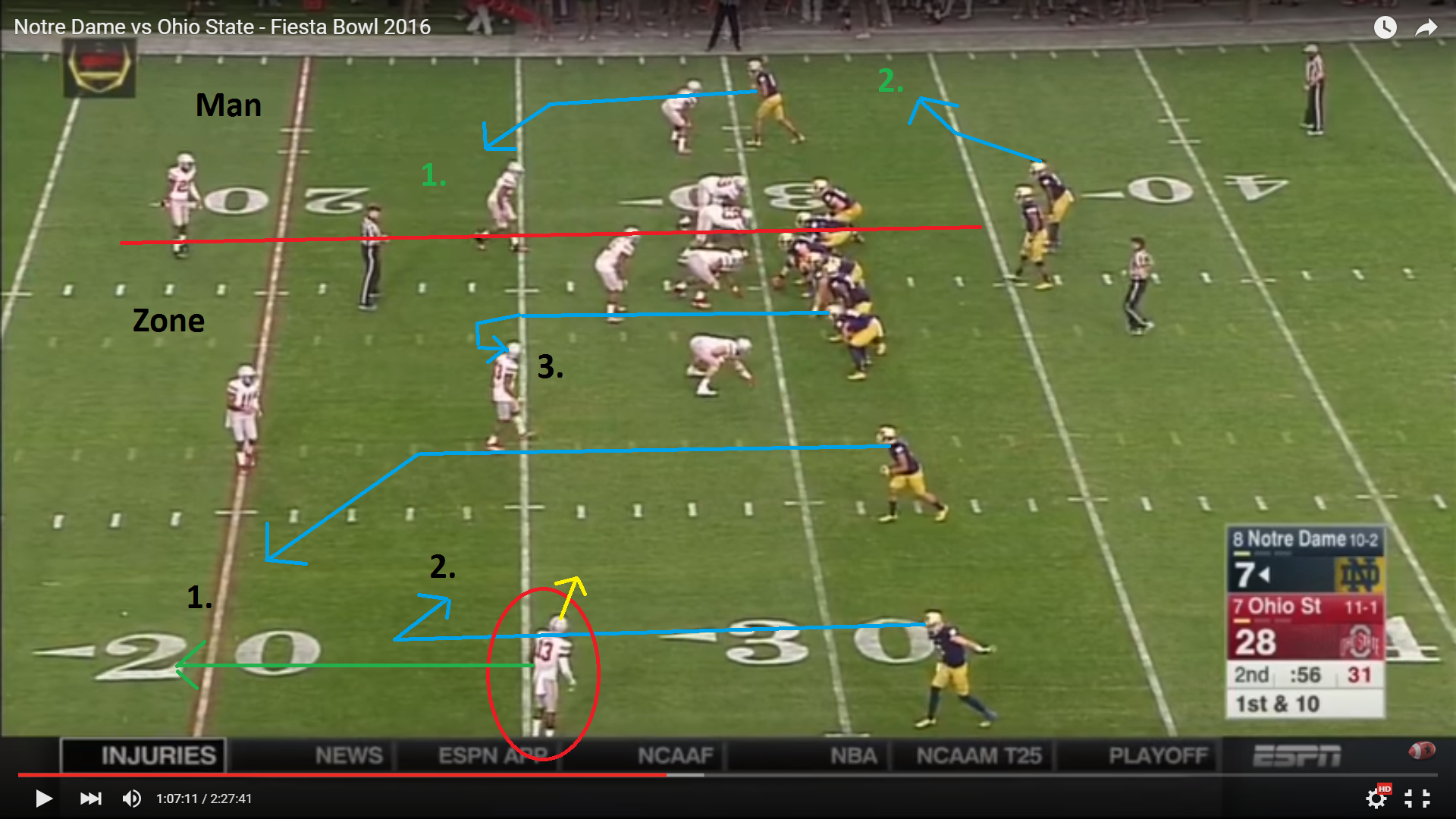 The zone side is designed to exploit the corner in a cover 2 defense. The read progression is a pretty common high / low read. You start by looking deep (the pattern conveniently identified with the black 1.), if the corner (red circle) stays flat (yellow arrow), you throw the deep pattern (black 1.). If the corner gets depth (green arrow), you go to your second read and throw the curl pattern underneath (black 2.). If your first two reads are covered, you can try to hit your tight end on a curl (black 3.), tuck the ball and run or throw it away.

If it's man coverage you are going to look to your right. You will try and hit the wide receiver downfield (green 1.). If that isn't an option you can throw it to your running back (green 2.), tuck the ball and run or throw it away.

The reads are actually fairly simple. The trick will be to determine if it's man or zone... 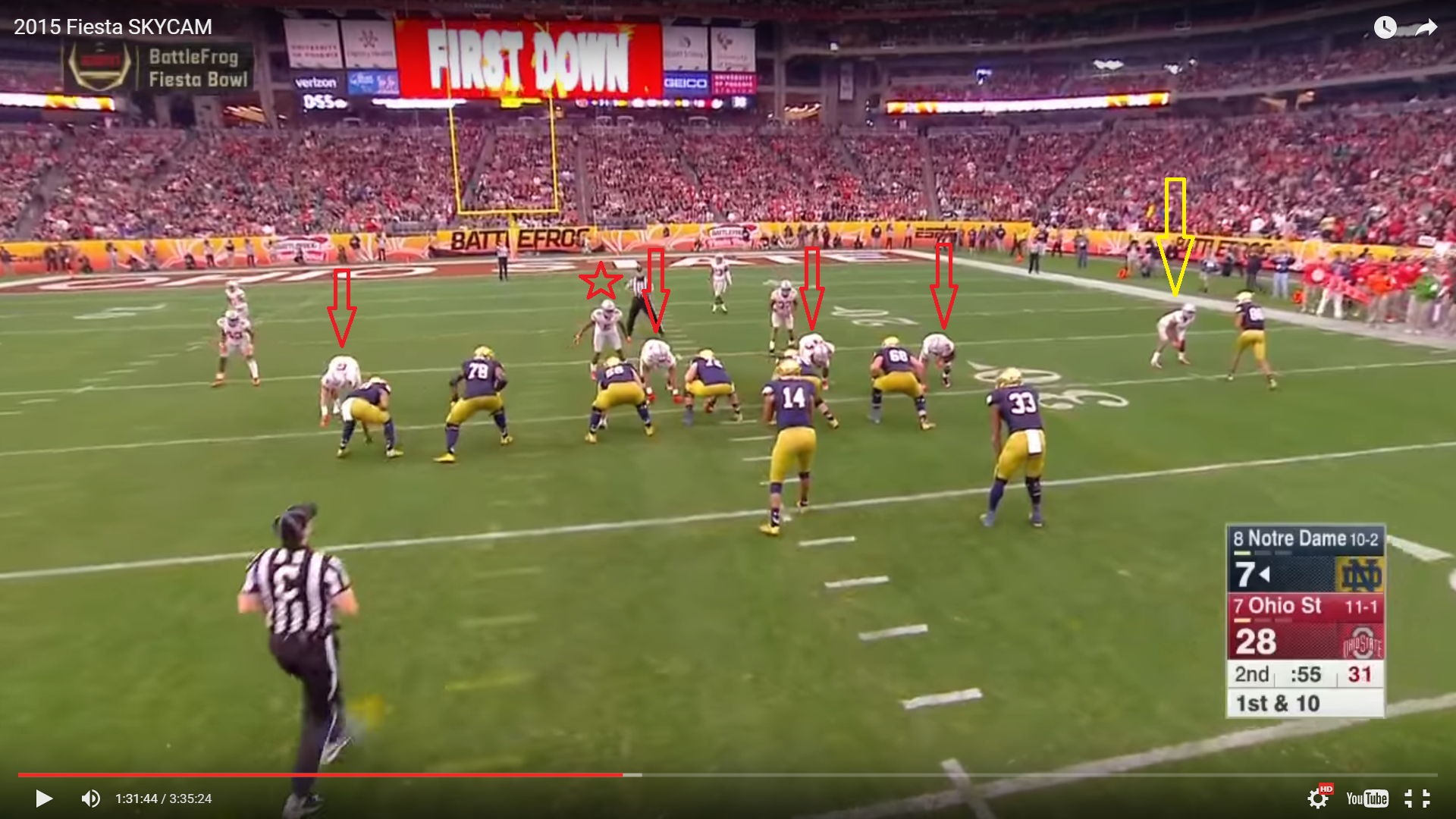 As we learned last play, before you snap the ball you must check your protection.  It looks like a 4 man rush (red arrows). It's not outside the realm of possibility that the linebacker is going to blitz (red star), but you should have enough blockers if he does.

Of course you still need to figure out if it is man or zone. You take a quick peak at the corner (yellow arrow). Unlike the last play he's up tight. Does this alignment mean he's playing man coverage? Or is this cover 2 and he's going to jam the receiver then pass him off and play underneath?

The corner is shaded to the inside, which suggests man coverage. Of course, good corners will play with their alignment and try to trick you. Are you certain this alignment means man coverage, or is the corner baiting you? If you are wrong and he tricks you, it's probably an interception and you lose the game... maybe you should wait and verify the coverage post-snap. 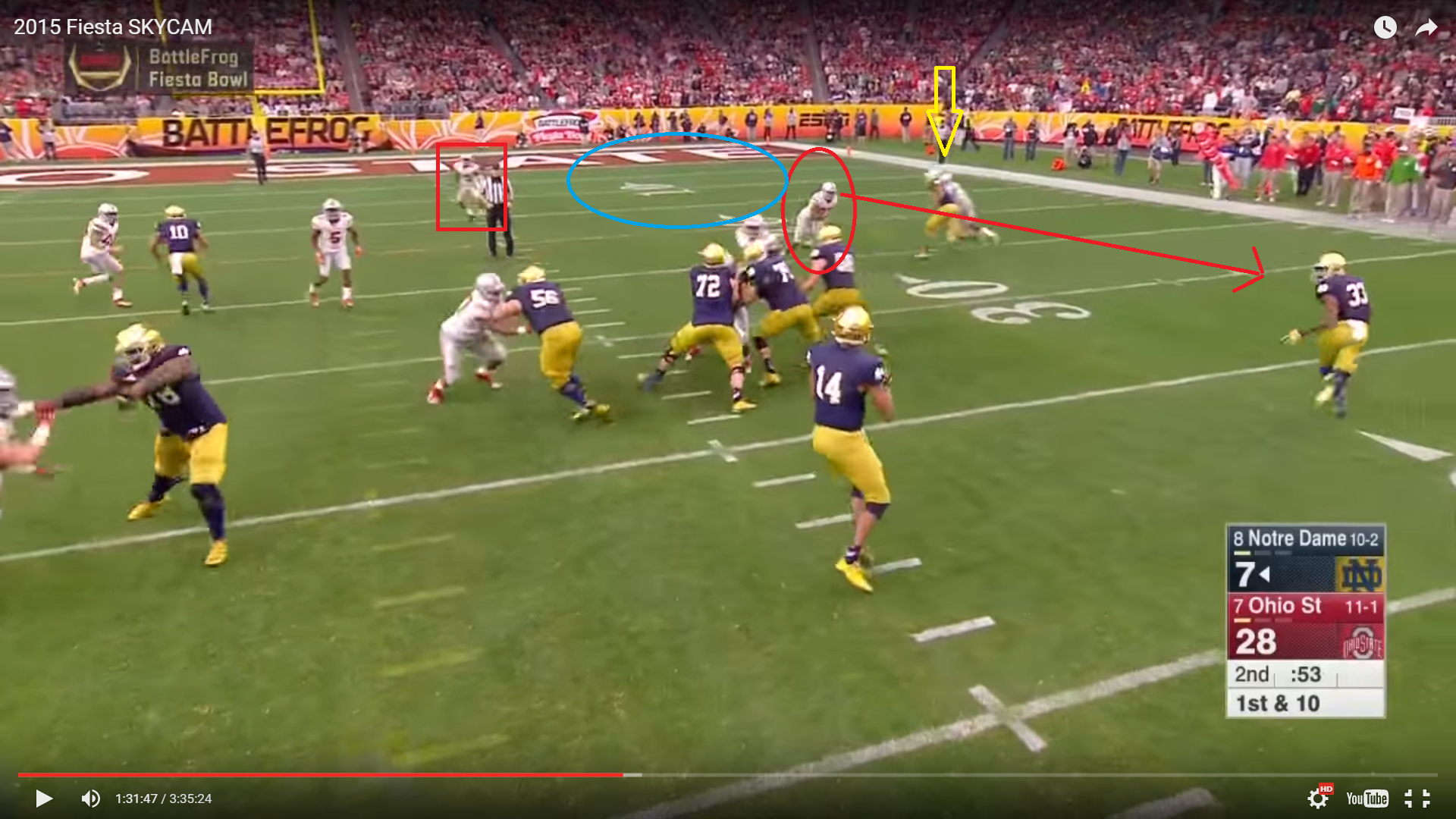 The linebacker (red circle) immediately goes to the running back (red arrow). This confirms man coverage. An added bonus is the linebacker has vacated the area where you want to throw (blue circle) and the safety stayed deep (red box) which also provides a little extra room (blue circle). Your receiver has done a great job and has inside position on the corner (yellow arrow). Everything looks good so far, now all you have to do is make an accurate, on time throw. 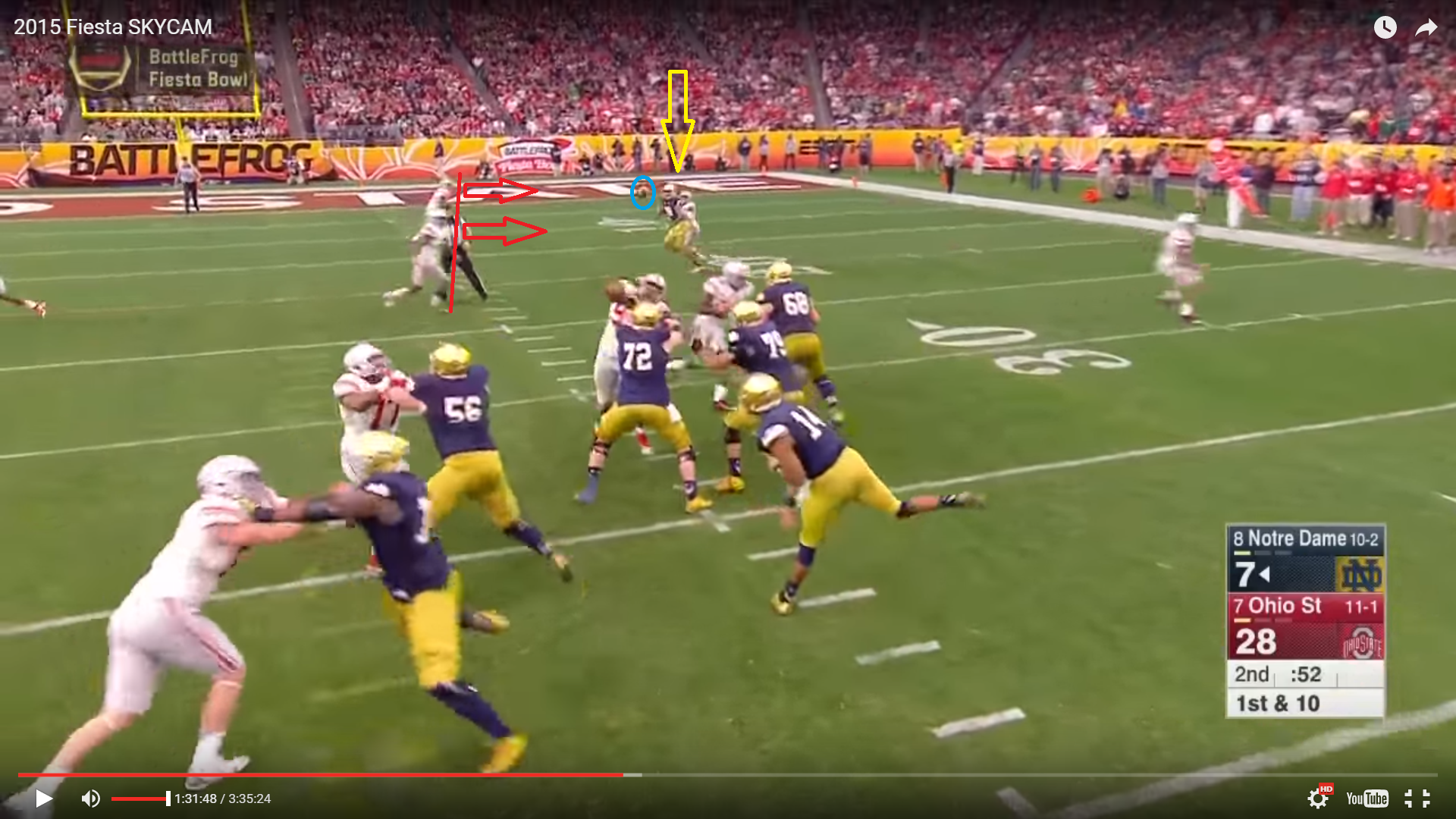 A fraction of a second ago it seemed like you had all kinds of space. But this is one of the most talented defenses in the country and windows close fast. The ball is in the air (blue circle), but the void in the defense is rapidly shrinking (red line and arrows).

Fortunately, your receiver has maintained inside position (yellow arrow), of course he has to make the catch... with a corner on his back and two defenders looking to make him pay the price for coming across the middle. 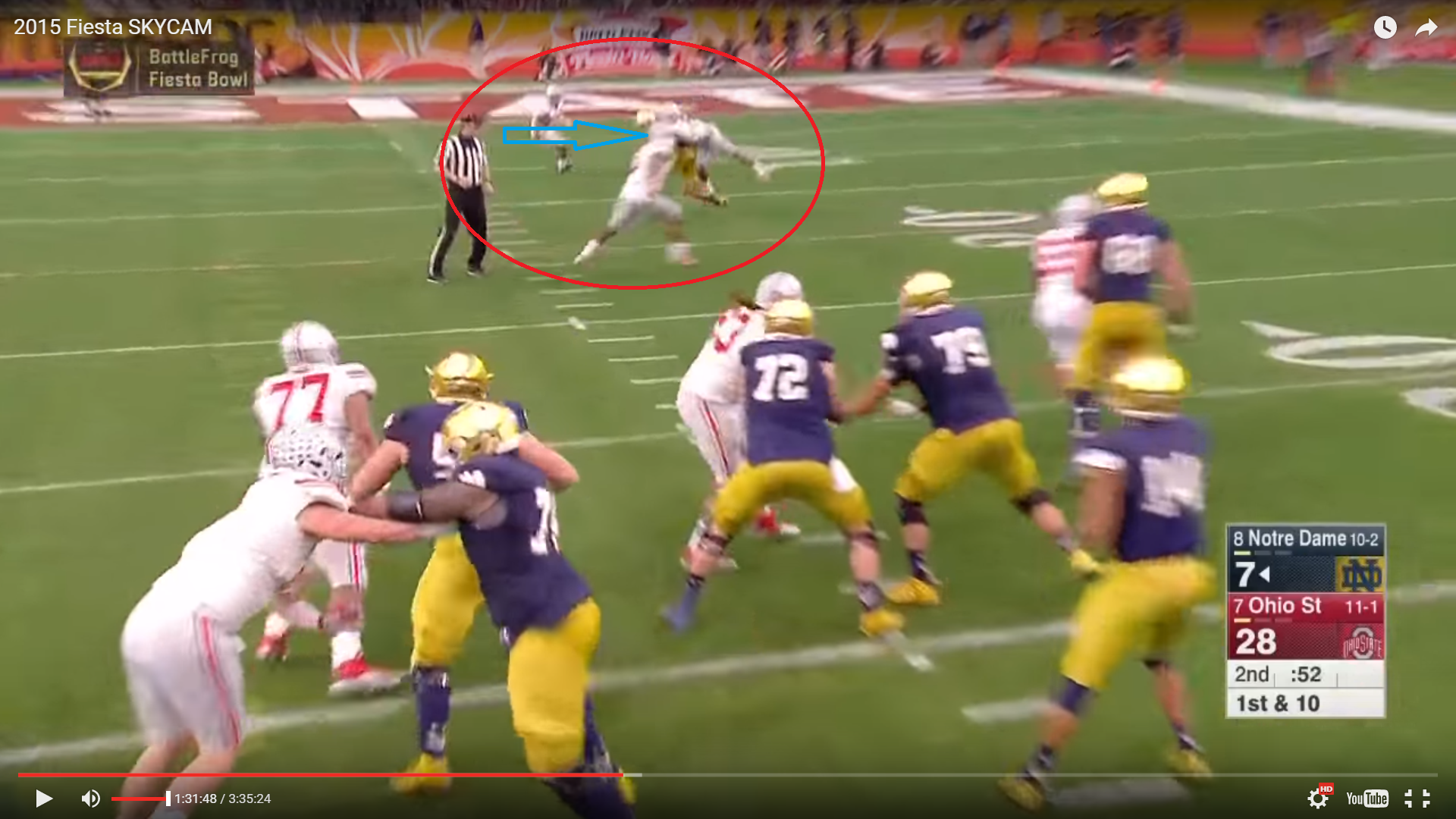 What was once a pretty large gap in the defense closed very rapidly (red circle). However, because you made a quick decision and threw the ball accurately, your receiver was able to make the catch (blue arrow).

You did a good job. The play call gave you options versus zone or man coverage. You suspected it was man coverage initially, but waited until after the snap to confirm. As soon as you saw it was man, you knew exactly where to throw the ball and delivered a strike.

This is the type of play the starting quarterback at Notre Dame is supposed to make. Well done, but don't get too excited. Your team needs a touchdown. There's still work to do.