It's a different world when you are the quarterback

Playing quarterback is hard. Opposing coaches are constantly trying to confuse you. Your own coaches yell at you. Players on the other team want to hit you and every decision you make is scrutinized.

The Fiesta bowl offered an opportunity (via the Sky Cam) to see plays unfold from the perspective of the quarterback.  Through the miracle of technology and the gift that is the OFD film room, we are going to break down a play through the eyes of the quarterback. The good news is that you can do this from the safety of your own home. No one will yell at you, second guess you, or hit you (unless you are into that sort of thing, but that's your business).

From here on, you are Notre Dame's starting quarterback. Playing in the Fiesta Bowl. Against the defending national champions. In front of thousands of fans, and a national TV audience. May the luck of the Irish be with you.... you're going to need it. 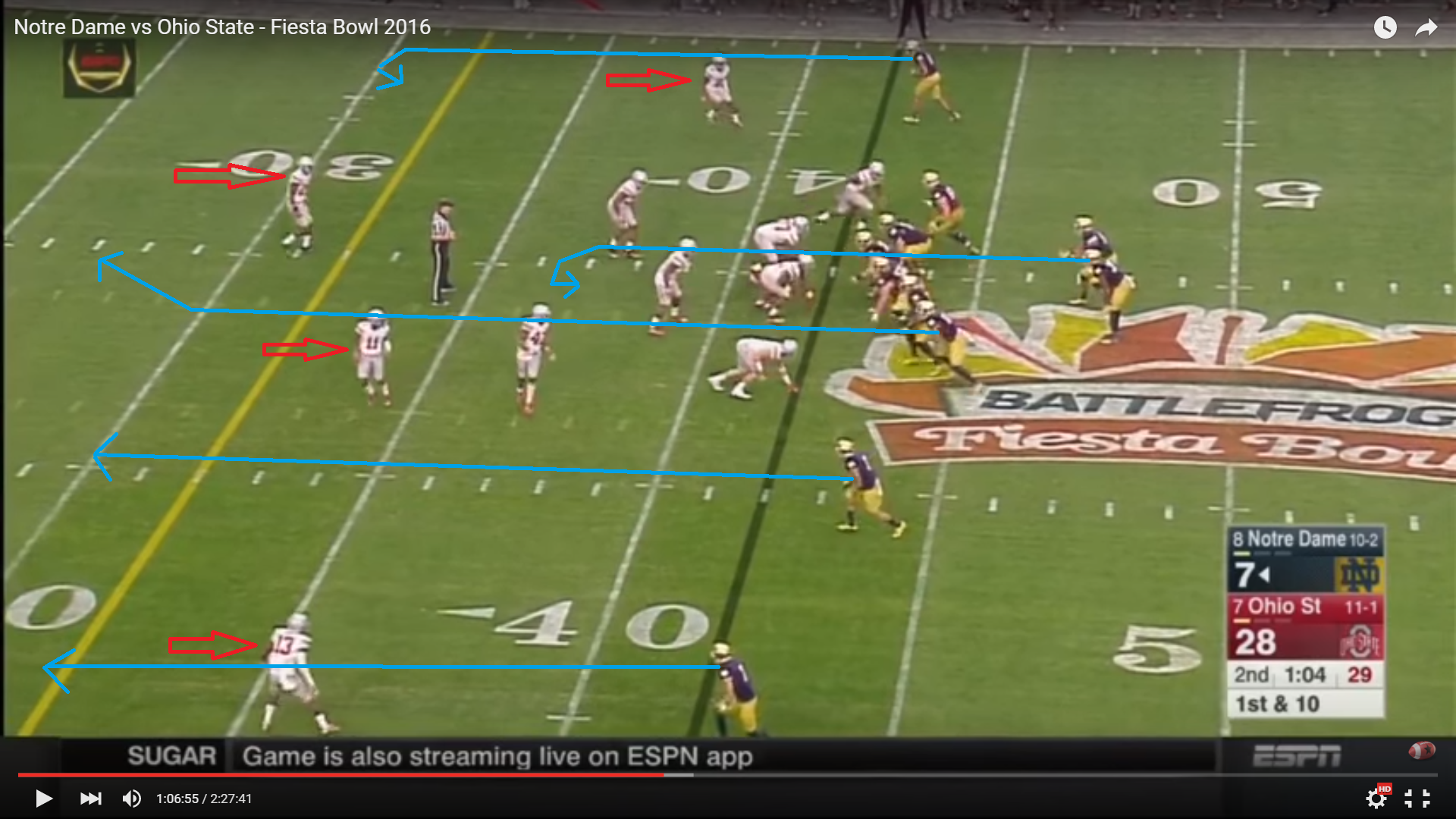 The first thing you need to do as quarterback is understand the situation. There is a sense of urgency. Your team is down by three scores and there is about a minute left in the half. You need to go fast and put points on the board.

We'll start with the traditional TV view of the play so you can get a sense of what everyone is doing. In this case, you will have deep patterns to your left and underneath patterns over the middle and to your right (blue lines).

Note the alignment of the secondary, the two corners are starting to backpedal and get depth. One of the safeties is already deep and the other appears to be headed backwards (red arrows). What does that tell you? Are you favouring the deep patterns or the underneath patterns at this point? 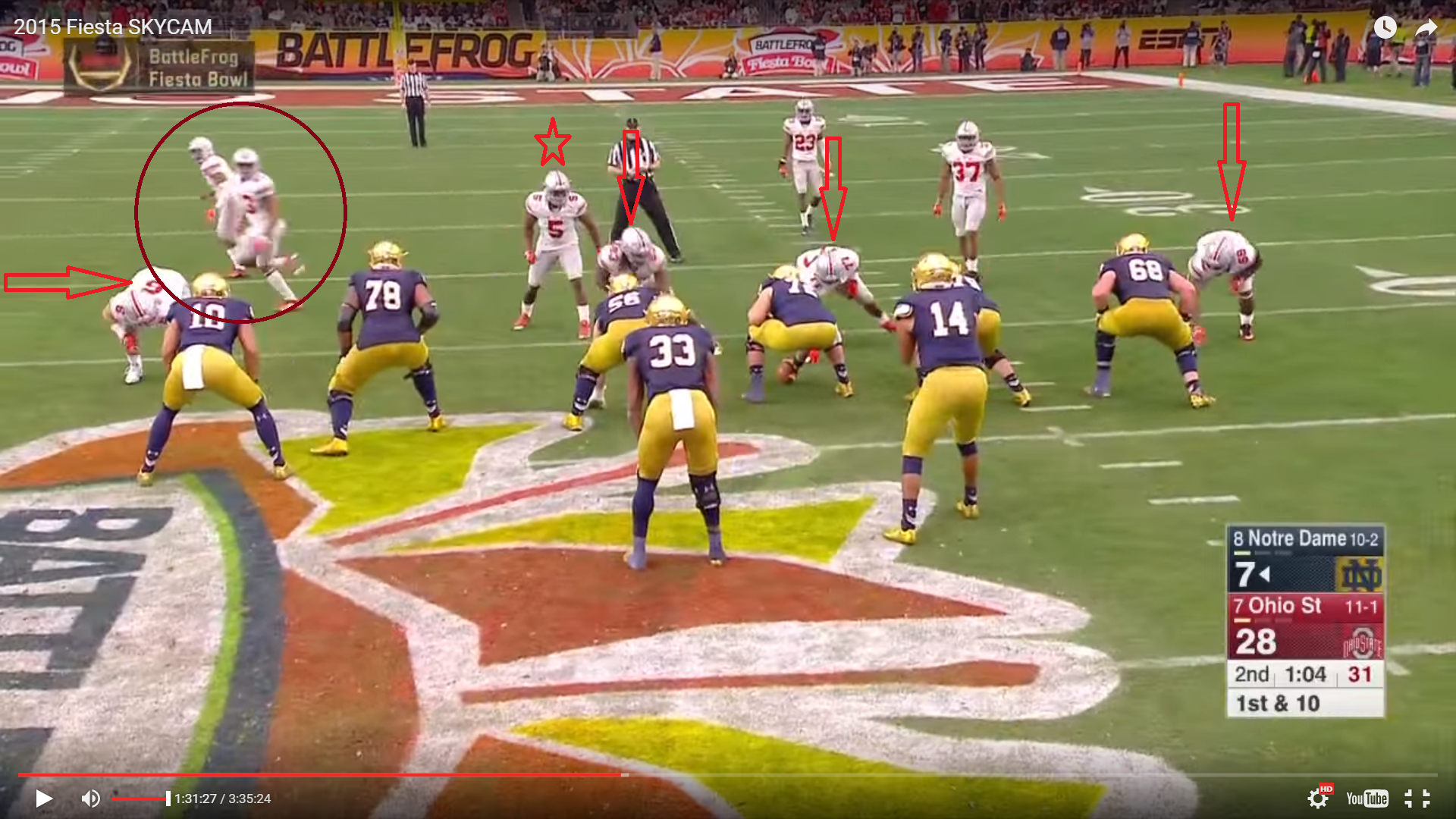 Because you are going fast, the defense is scrambling to get into position (crimson circle). This is a good thing, but when you go fast it also means you need to make quick decisions. Before you snap the ball (and you need to snap it soon to take advantage of confusion on the defense) it is probably a good idea to make sure that the protection is right.

At this point it appears you are in pretty good shape. Ohio State has 4 linemen who will likely rush the passer (red arrows). It's possible that a linebacker will blitz (red star), but the numbers are still pretty good. You have 5 linemen blocking and your rookie running back will check blitz (in theory) before he releases. 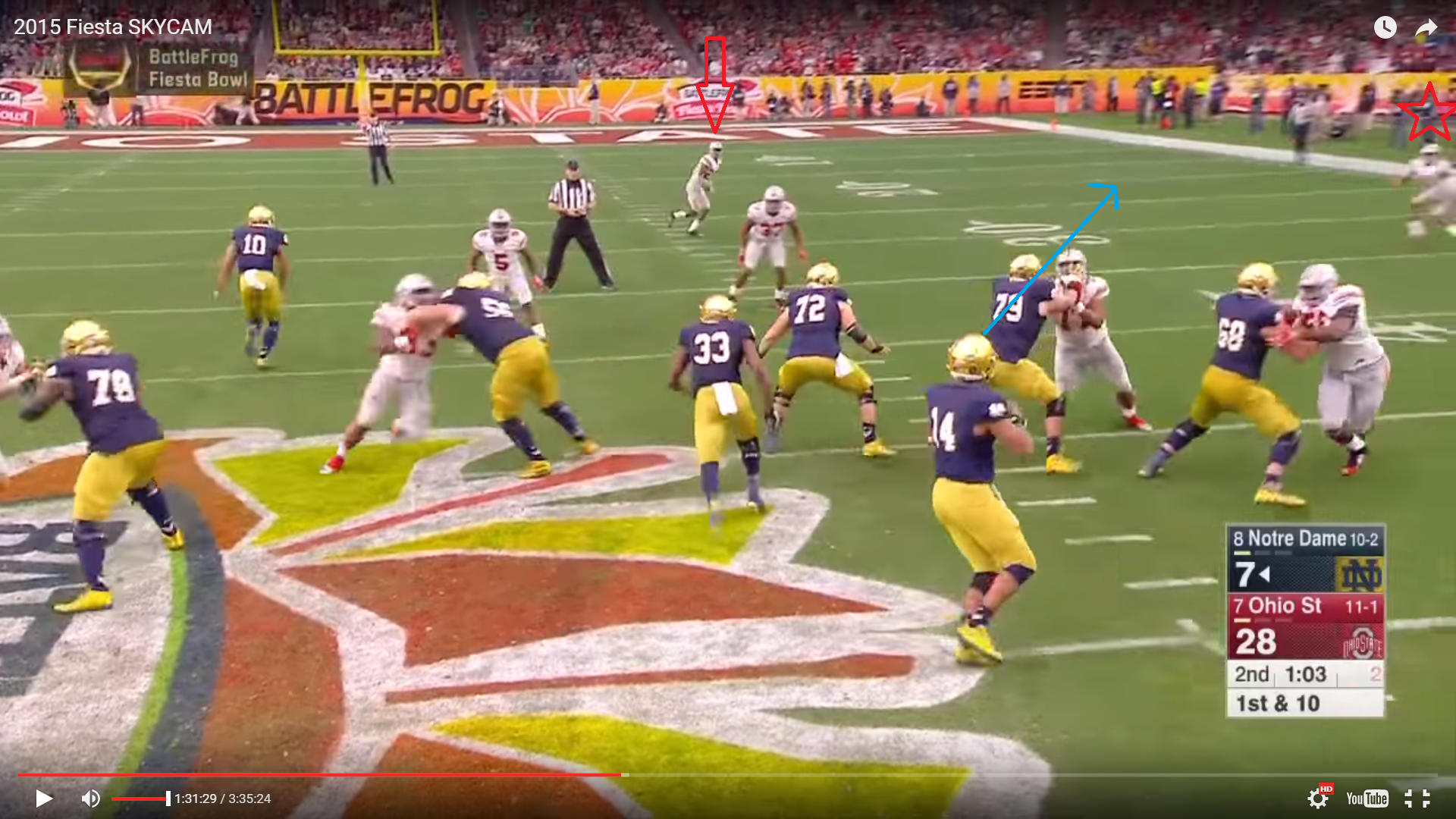 Remember the pre-snap alignment where the secondary was starting to bail deep? Because of this, you automatically look to the right which is the side of the formation where you have an underneath pattern (blue line). Your post snap-read confirms that the corner is getting depth (red star). The safety (red arrow), is also deep. 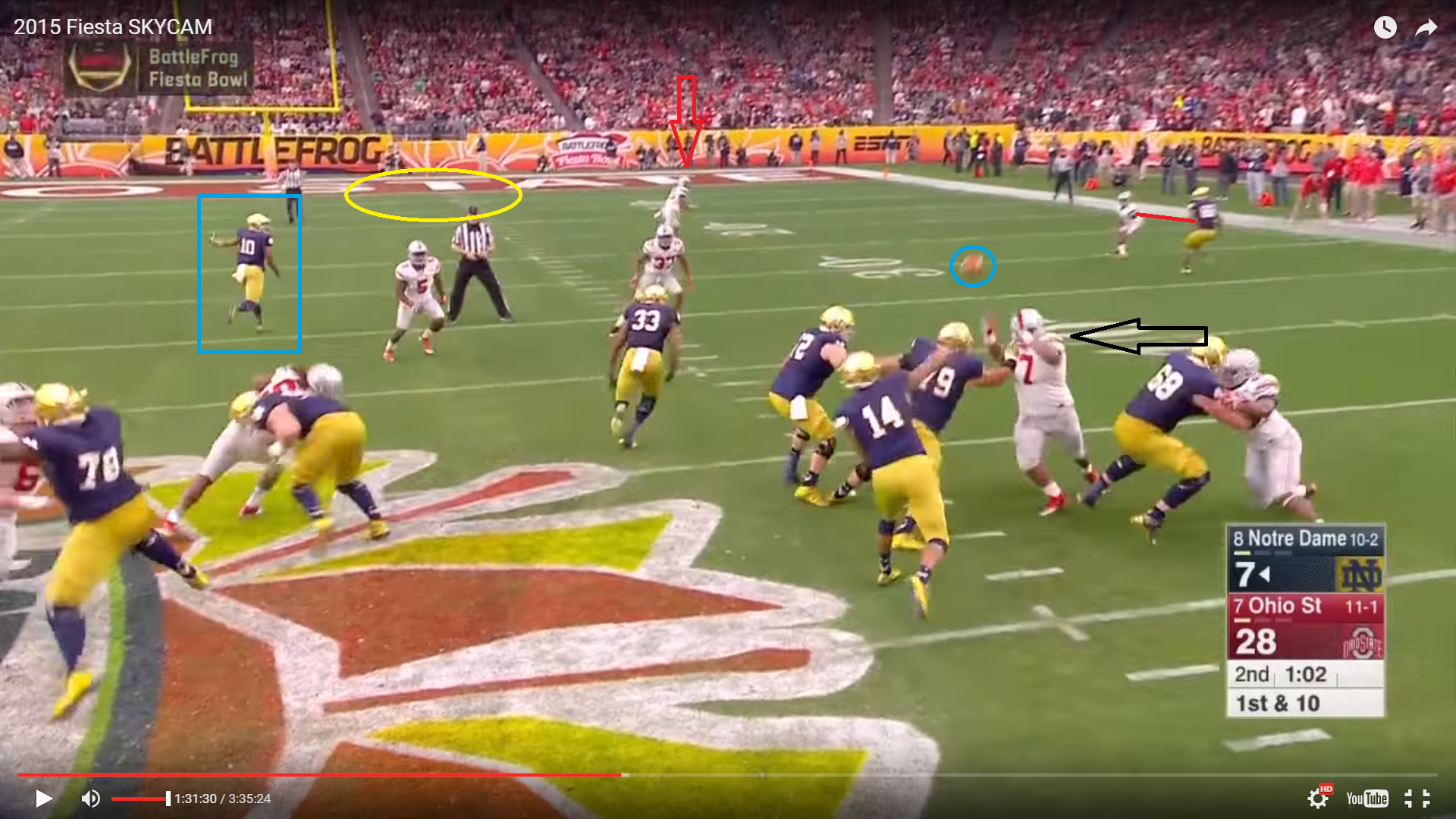 There is a bit of a cushion between the corner and the receiver (red line). This is a timing pattern, so there can't be any hesitation. If you throw the ball late, it likely gets intercepted and returned for a touchdown, which would be game over.

Decision made. No time to waste. The ball is in the air (blue circle) before the receiver has made his break.

Of course your rookie tight end and arm chair quarterbacks across the country won't like the decision. Because your pre-snap read dictated you look to the right initially, the safety followed your eyes, and drifted in that direction (red arrow). This left a big gap in the middle of the field (yellow circle) leaving the tight end wide open (blue square).

So what should you have done on this play? If you looked to the tight end right away, the safety would have stayed in the middle and taken that pattern away. The only way to get this look would be to move the safety to the right with your eyes and then come back to the left and hit the tight end over the middle.  The problem is doing all of this takes time. You have a defensive lineman that is about to come free (black arrow) and therefore might not have the luxury of additional time to let the play develop. 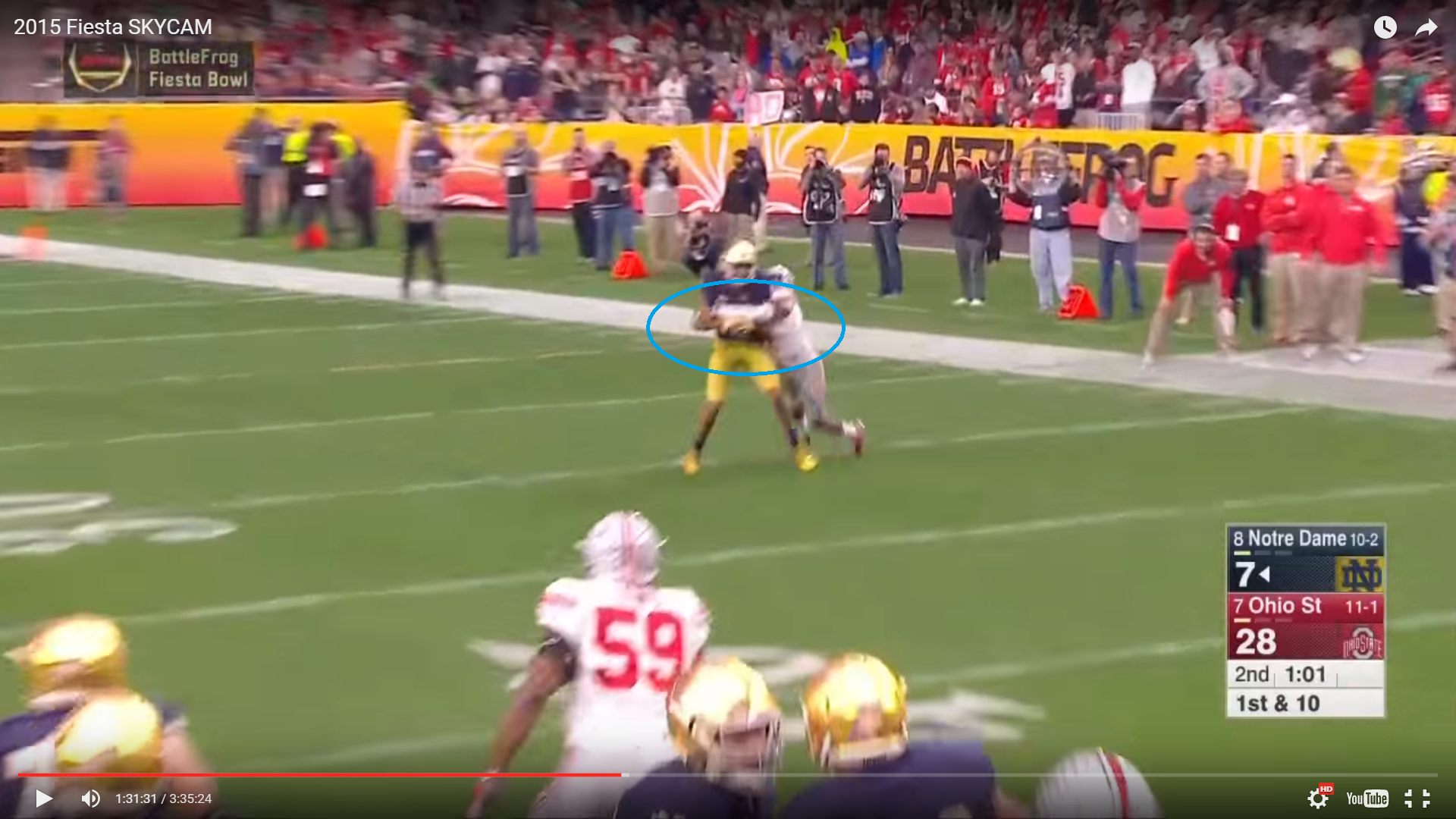 It's hard to see, but the ball arrived on time and is in the hands of the receiver (blue circle). It's pretty clear that even a fraction of a second of hesitation would have resulted in an incompletion.

Even though you missed a chance for a big play, you did a good job. You made a logical pre-snap read and then confirmed that read post-snap. You threw the ball accurately, on time, and completed the pass. Well done, now it's time to get ready for the next play.