Join us in celebrating a great season and a great team with some good ol' OFD humor.

Another season of Notre Dame football has come and gone. The lockers have been emptied out, the shiny helmets put into storage, and the heart medication stored in the cabinet (at least until March Madness). As the dust settles and the sun sets on Notre Dame Stadium, we bid adieu to the men of Team 127 who gave so much of themselves to honor Our Lady's University--men who began the season with championship hopes, suffered an historically ludicrous and unfortunate rash of season-ending injuries, but battled through the obstacles and came within a few measly points of the CFP Playoff.

While it stings that we couldn't close out the season with a win over a very good Ohio State team, the Fighting Irish have a lot to be proud of this year; we, their fans, are privileged to watch them every Saturday. From the bottom of our hearts: thank you, Team 127!

The TSW on the eve of the Fiesta Bowl featured Urban Meyer's mug, and several members of the Commentariat managed to clear their busy holiday schedules and contribute their sparkling wit. 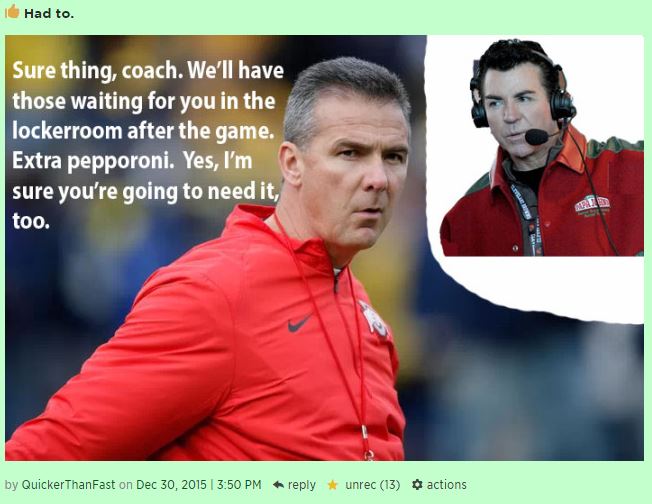 --Meanwhile, tlndma believed Coach Meyer was a bit concerned about a certain wayward running back:

--And the winner of the season's final TSW is...Anachronism, with a witty poem that would make Dr. Seuss himself proud:

In the last poll before the Fiesta Bowl, you, the Commentariat, were asked to weigh in with your predictions for the big matchup against OSU. 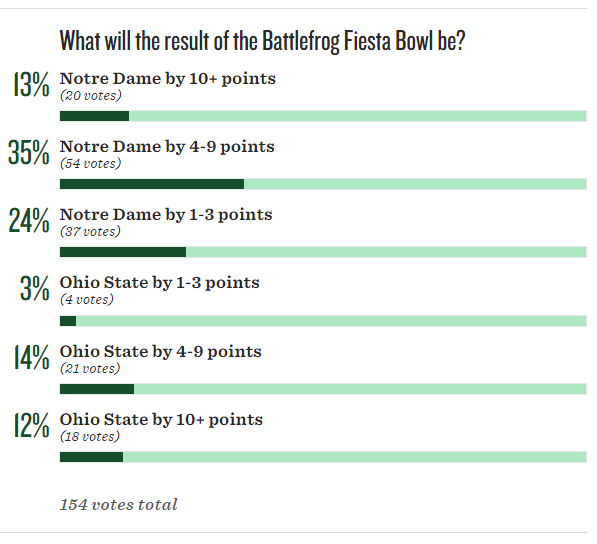 Well, we may have been a tad optimistic...but hey, where's the fun in being rational, amirite?

Although Notre Dame did not win, that doesn't mean the Fiesta Bowl didn't have some light-hearted moments. The final TSW entry for Team 127 depicts Alize Jones performing some, er, acrobatics in the endzone. You all know what to do--take some time and give us your funniest captions and photoshops. TSW won't be using CFB material again until August, so let's make this a good one!

On a personal note, I'd like to thank all of you in the Commentariat for making this site the awesome place that it is. Whether you're a self-proclaimed analyst, a casual reader, a lurker, or someone who's just here to post GIFs, all of you play a huge role in the daily life of our little corner of the Internet. Ever since I began writing here in Fall 2012, I have constantly been amazed at how good the Commentariat is about being able to hold passionate yet reasonable debates one moment, then begin showing off cooking skills and GIF-creating magic the next moment. It's truly a privilege for me to interact with you all on a regular basis; as I've always said, all I do is give y'all a starting point--you're the ones who turn it into something awesome and hilarious. (Well, I'm sure at least someone finds it hilarious.)