The X's & O's behind the first touchdown of the season

On Saturday Notre Dame opened up the 2015 season in grand fashion by laying a beat down on Texas. The Irish were in complete control for most of the game and cruised to a relatively easy victory. When things look easy on the football field, it's usually because a number of players are executing their assignments at a high level. The first touchdown of the season provided a perfect example of this. Let's take a look at the film and I'll show you what I mean. 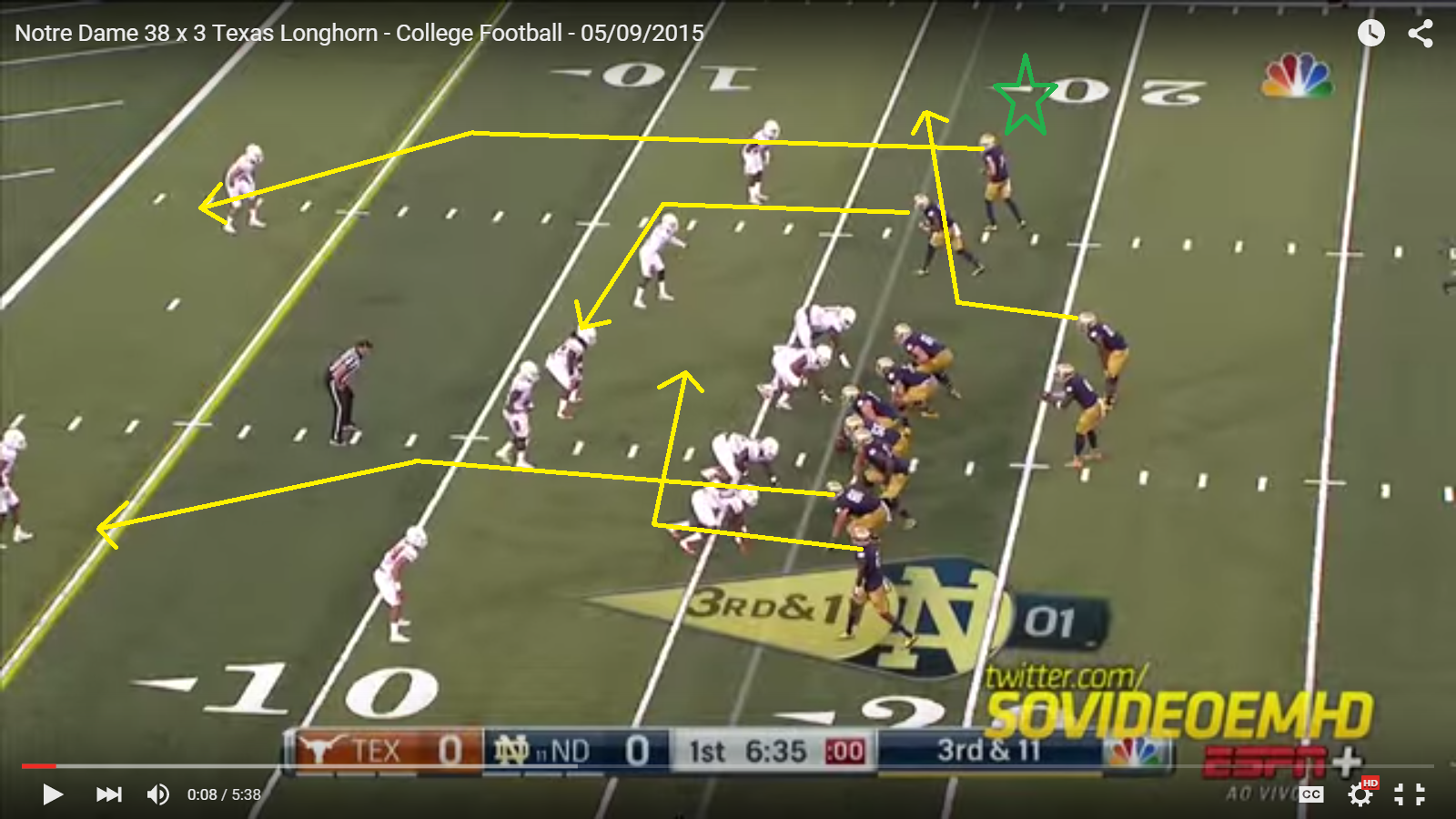 3rd & 11. By all accounts this is where Malik Zaire was going to struggle. Obvious passing situation, throwing intermediate routes that require timing and accuracy.

Notre Dame is going to run route combinations that stress the defense at multiple levels (yellow arrows). This will force Zaire to make the correct read and take what the defense gives him.

As an aside, note the alignment of Will Fuller (#7, green star). Although he's lined up at the wide receiver position, he's off the line of scrimmage. This is the sort of subtle coaching adjustment that most people don't notice. By moving Fuller off the line, he is more difficult to jam. Smart move by the Irish coaching staff. 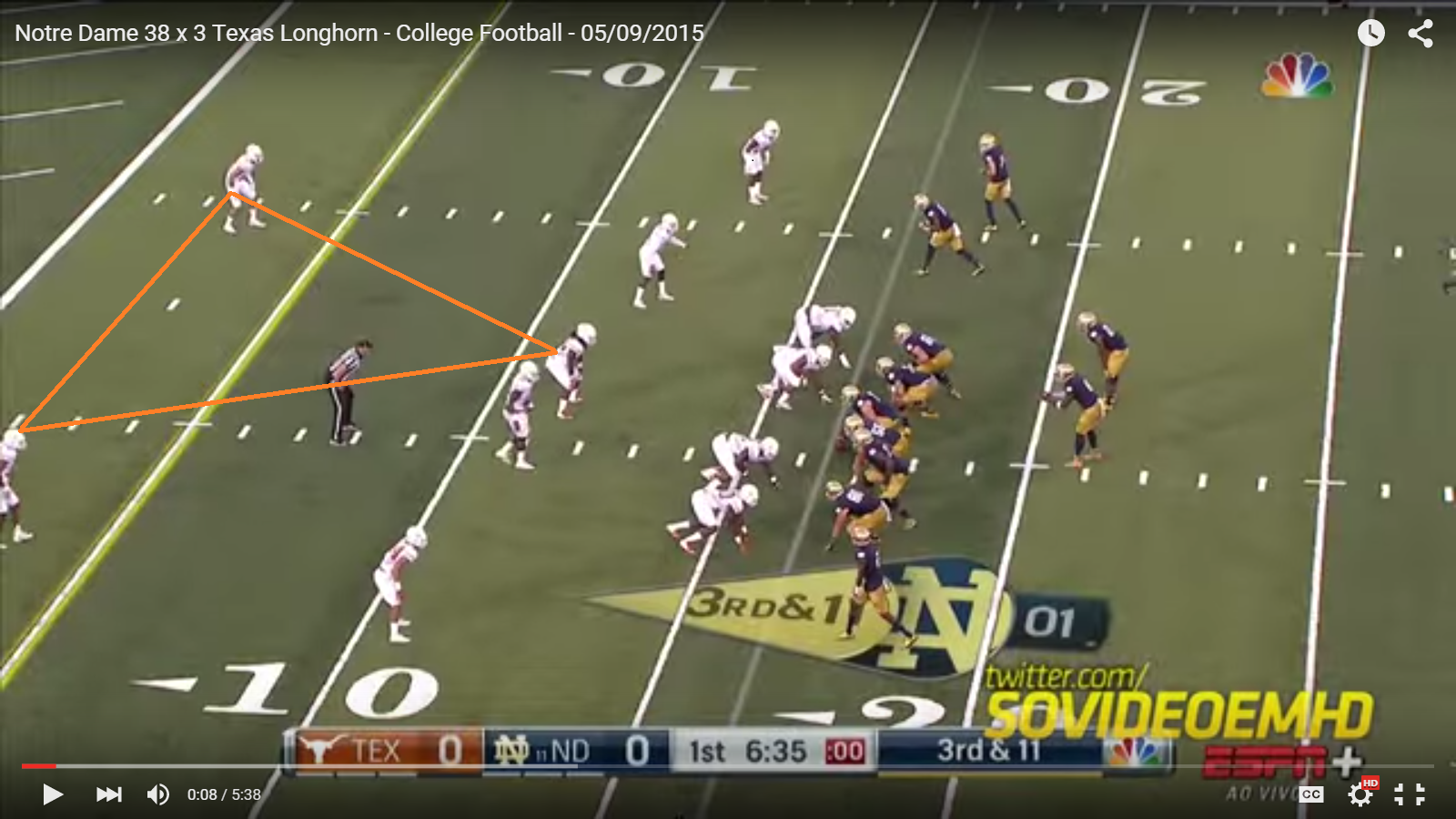 Zaire will read the three players in the orange triangle. How they react will determine where he will go with the ball. 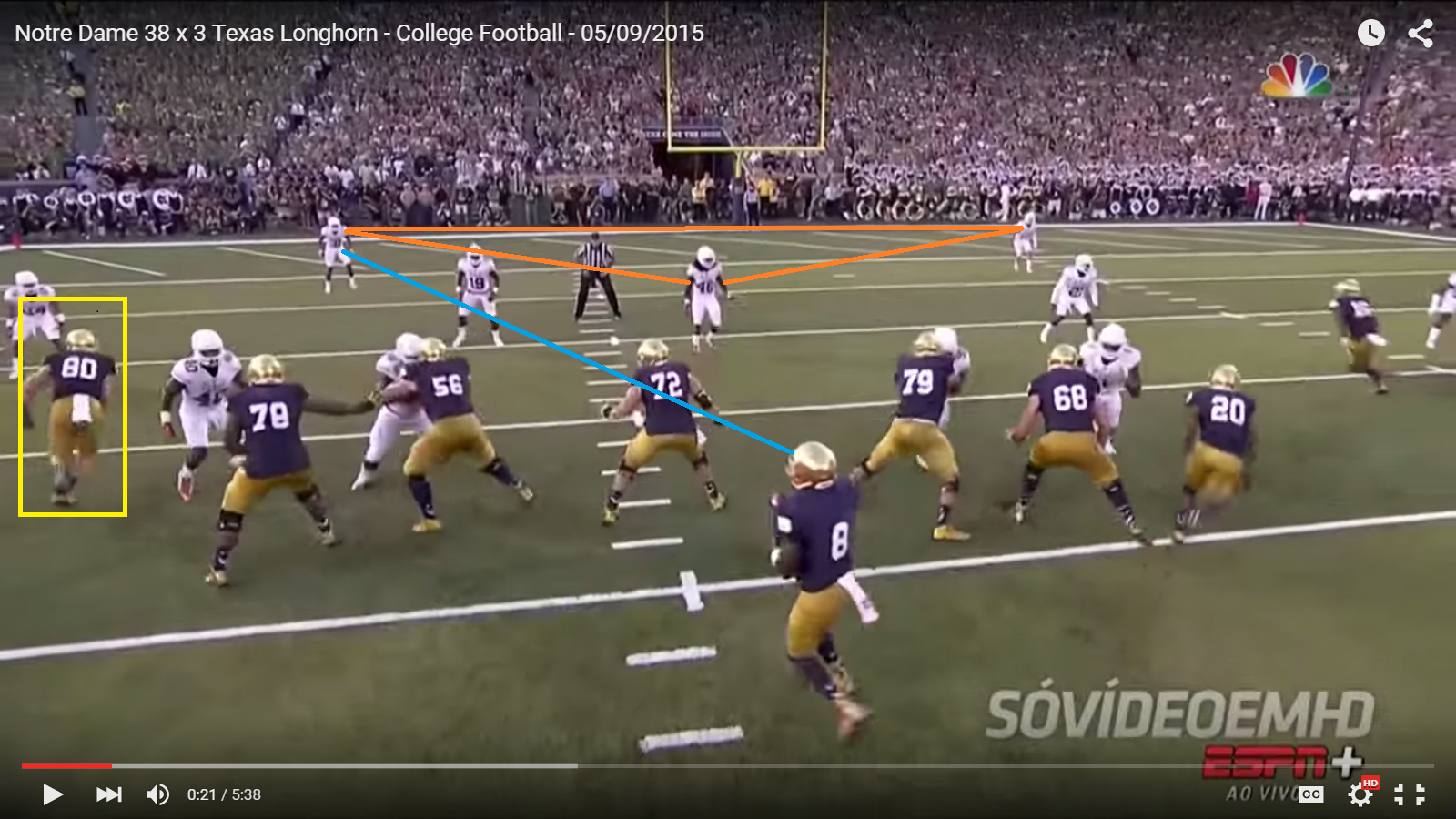 The first read is the safety (blue line). His alignment will determine if Zaire throws the ball to  Durham Smythe ( # 80, yellow box). 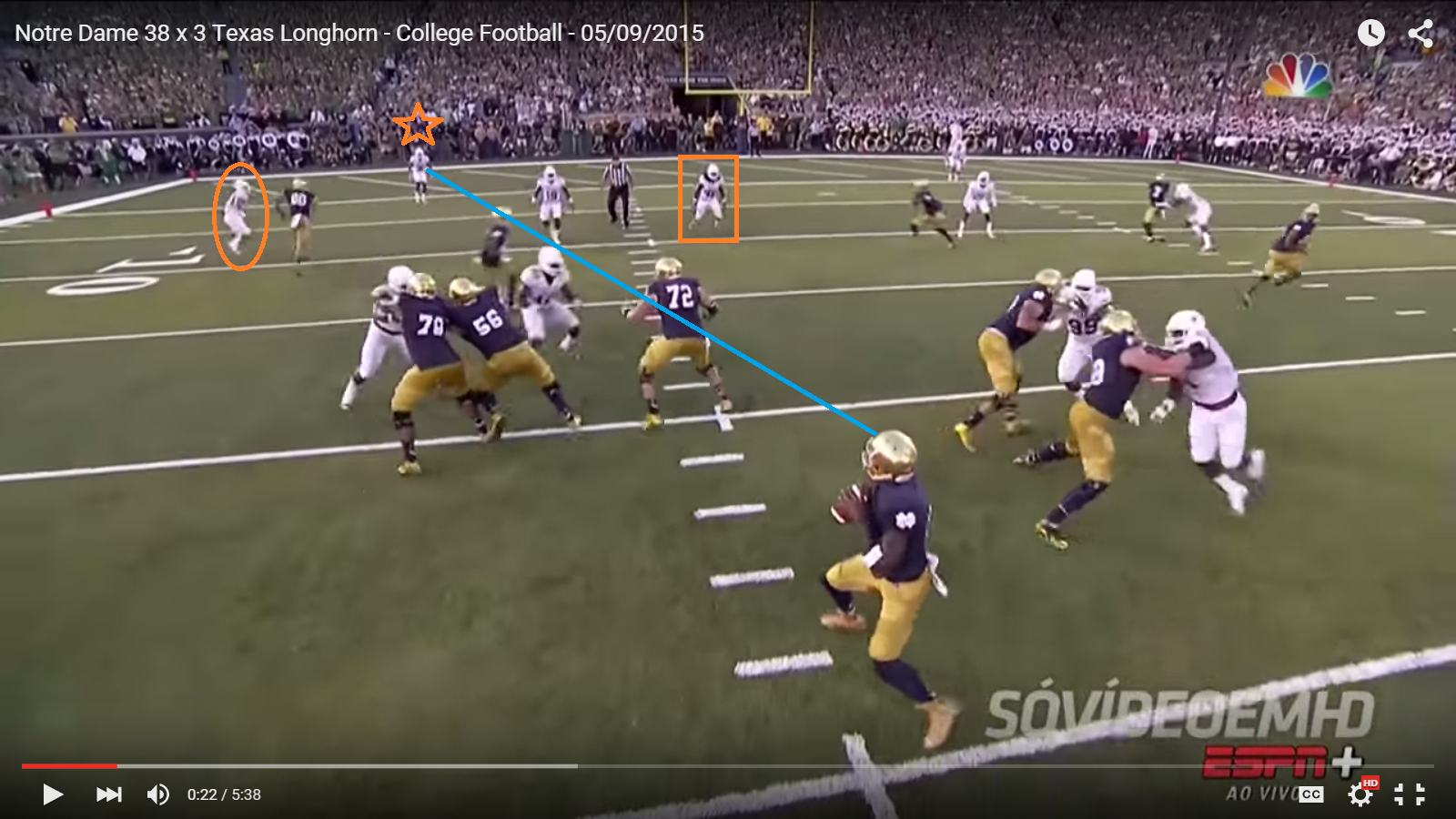 The safety stays high and to the outside (blue line, orange star) and the corner is dropping underneath the tight end (orange circle). The tight end is double covered so Zaire will go to his next read, the linebacker highlighted in the orange box. 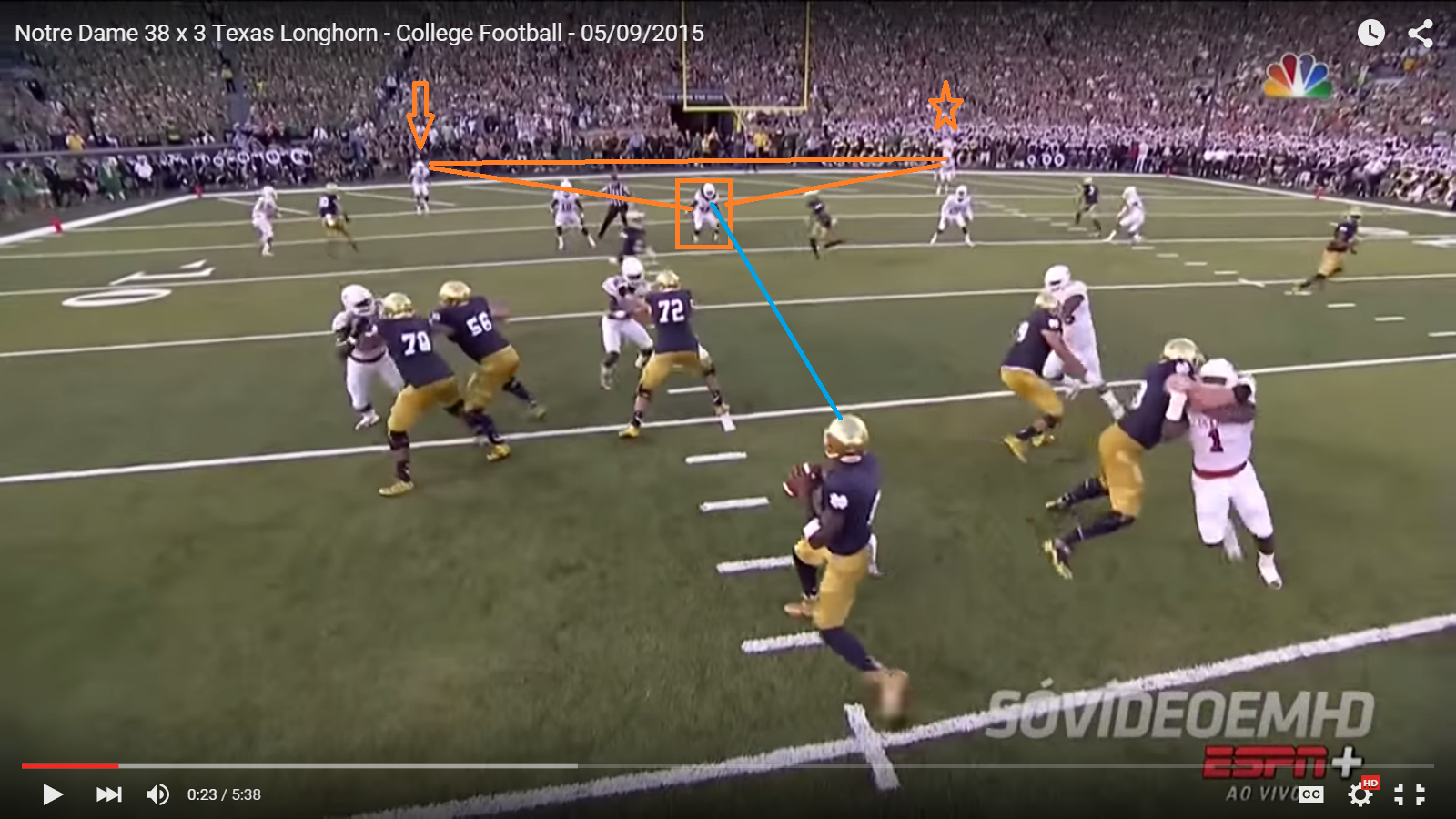 Zaire looks to the linebacker (orange box)  and sees that he is preoccupied with the crossing pattern. The combination of the linebacker staying shallow and the two safeties staying high and wide (orange arrow, orange star) leaves a void in the middle of the orange triangle that Notre Dame would love to exploit. 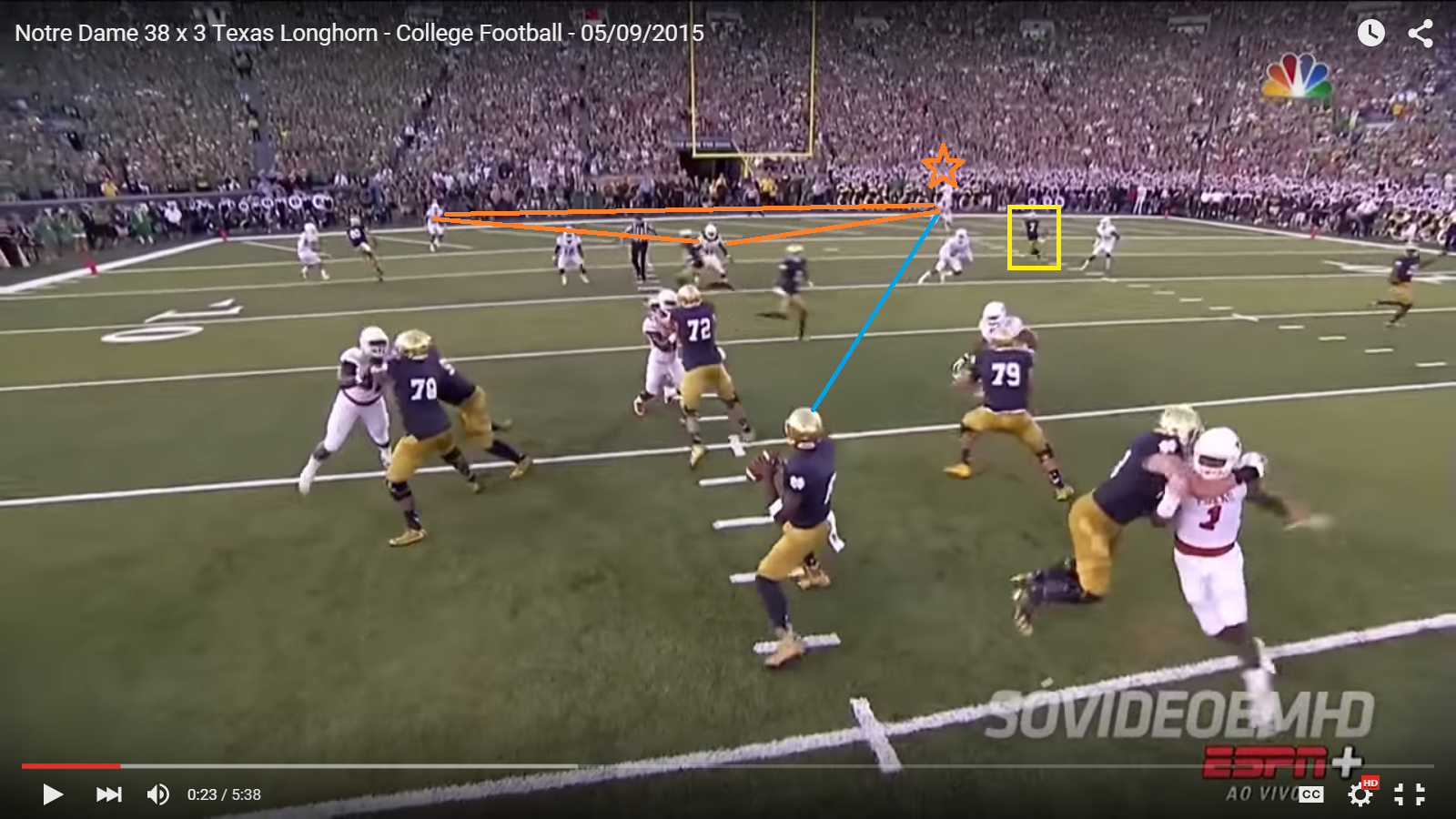 Will Fuller (yellow box) is about to break to the middle of the triangle. Zaire's only concern is the safety (blue line, orange star). Fortunately he's given Will Fuller a 7 yard cushion. That's like money in the bank. 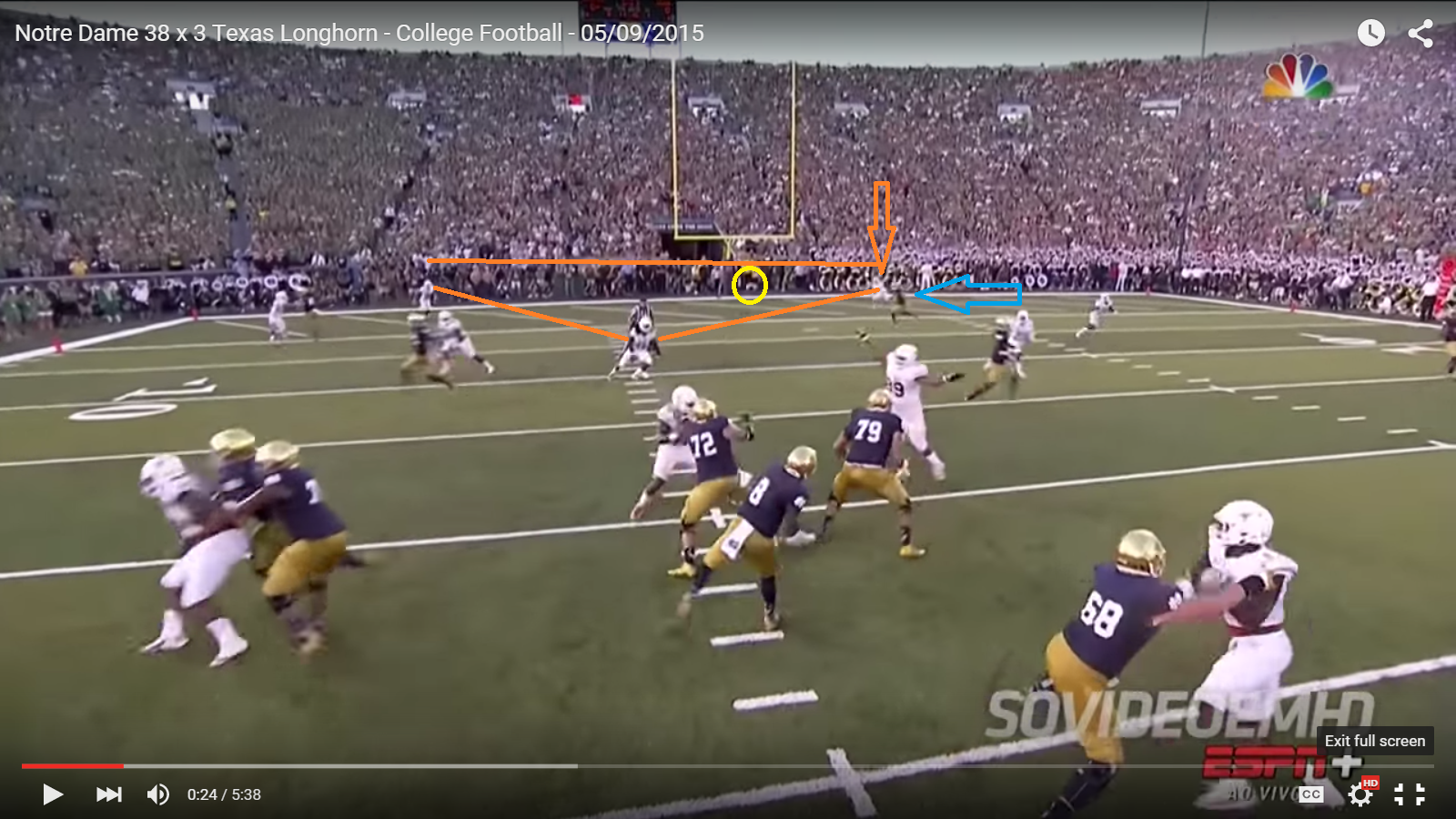 The ball is in the air (yellow circle). Fuller is in good position near the goaline (blue arrow). The safety is trying to break on the ball (orange arrow) but the chances of him beating Fuller are slim to none. The other two players in the triangle aren't in a position to make a play. 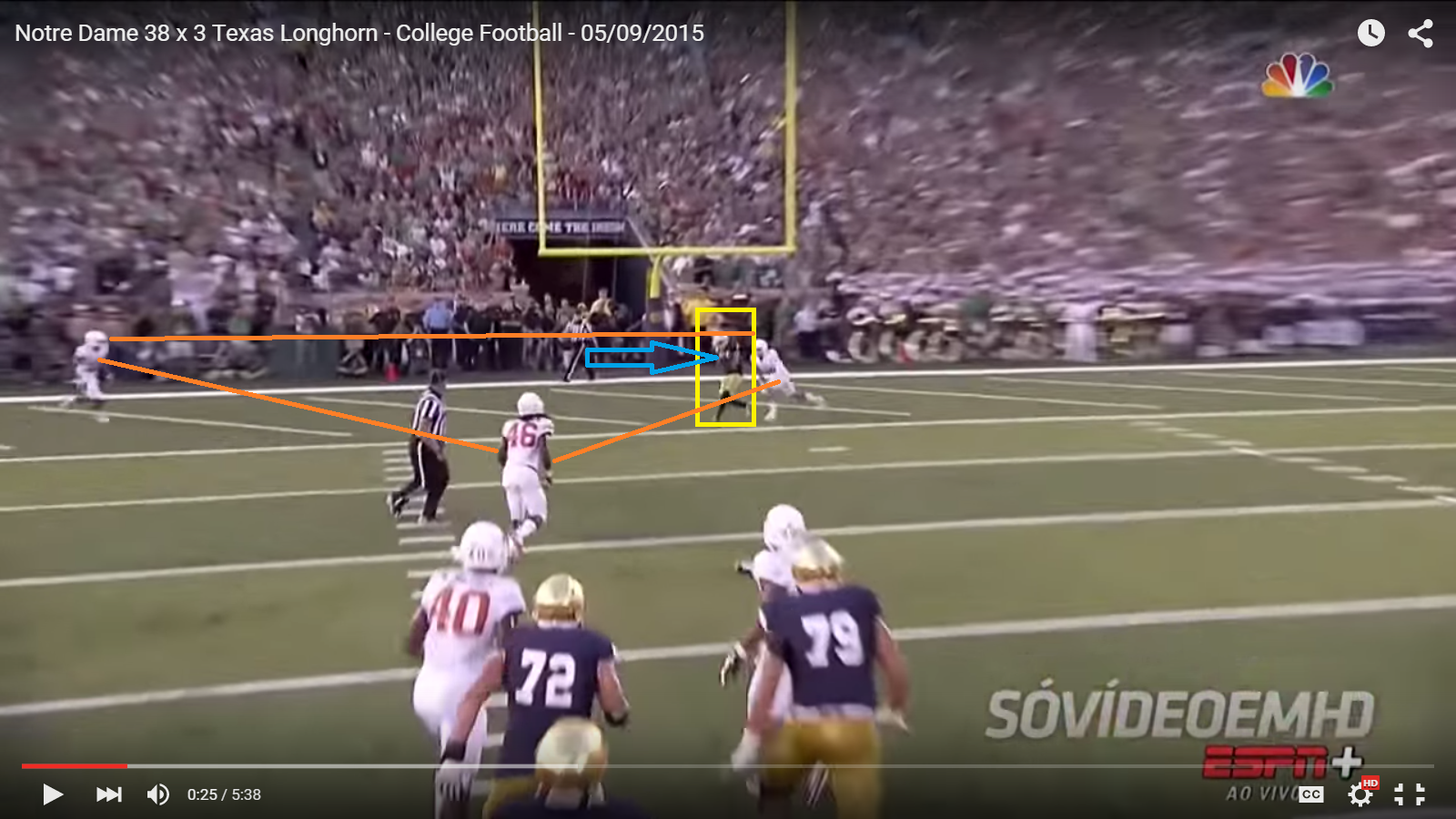 When you watch the video, pay special attention to the replay. You will see Zaire methodically go through his read progression. Of course if the offensive line doesn't do a great job, the quarterback would never have time to move through the progression. This is a great example of multiple players executing their assignments at a very high level.

Of course, I had to use the video clip shared by HolyCrossHog for the highlights. Well done HCH. Turn up the volume when you watch this video, it's awesome!

If Malik Zaire can continue to be this effective as a passer.... well let's just say it's going to be a fun year for the Irish faithful.