Riding a wave of positive vibes after shutting down Georgia Tech's vaunted triple-option, the Irish look to continue their winning ways in the silliness category.

Coach Brian Kelly of the Notre Dame Fighting Irish was craving honey. He had spent all day racing around South Bend and Mishawaka, tearing apart every supermarket he could find. But everywhere he went, the answer was the same: Sorry, Coach, honey's pretty low this year. Those dadgum bees don't like the kids coming near it, so we just gave up trying to get it. After all, if they can sting kids, imagine how badly they'd attack us!

Now, a few ornery bees might have stopped mere mortals, but not CBK, no sir. Scoffing in disbelief, he drove to a local beekeeping store and demanded eleven of their finest beekeeping suits. When the merchant asked him what he needed them for, BK replied, "Never mind that. As long as you have some that will fit 300-pound fellas, we've got ourselves a deal."

Five minutes later, Coach Kelly drove back to the Gug with a grim expression on his face and eleven pristine beekeeping suits in the front seat. Pulling up to the players' area, he hopped out of the car and ran up to the door. But as he entered the lounge, he caught a familiar scent. Could it be...?

He was greeted by a shocking scene: all the defensive players were lounging about with big grins and sticky paws, surrounded by shattered beehives and bee carcasses. "What's going on here?" Kelly stammered out. "What's with all these dead yellow jackets? And--WHERE DID YOU GET THAT HONEY??"

Several of the players looked up with amused expressions. Sheldon Day was the first to answer. "Well, Coach, we were kinda hungry, and we found these beehives behind the Gug. Seems that some yellow jackets chased off all the honeybees, so we decided to, um, liberate it."

Seeing Kelly stunned into silence, Jaylon Smith wiped his mouth and helpfully chimed in. "Yeah Coach, everyone was saying how big and mean these bees were. Ya know what? They--urp--they folded like a house of cards when we decided to wreck their hives. They didn't even try to sting us! Talk about a bunch of sissies..." 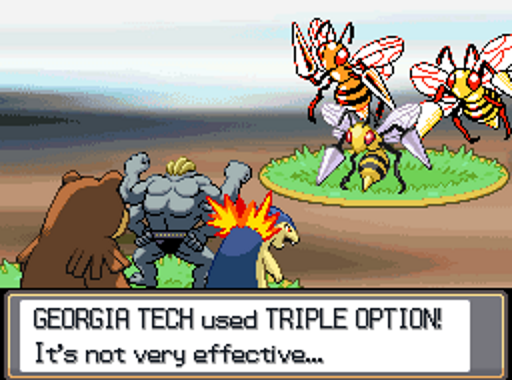 Following the thrilling last-second win over UVA, participation in TSW reached new heights. There were plenty of great submissions to choose from that incorporated Chuckling Justin Yoon; the top entries are listed below.

--ConcreteCharliee tapped into his inner laxbro and came up with this gem, taken from a photo featured in another submission: 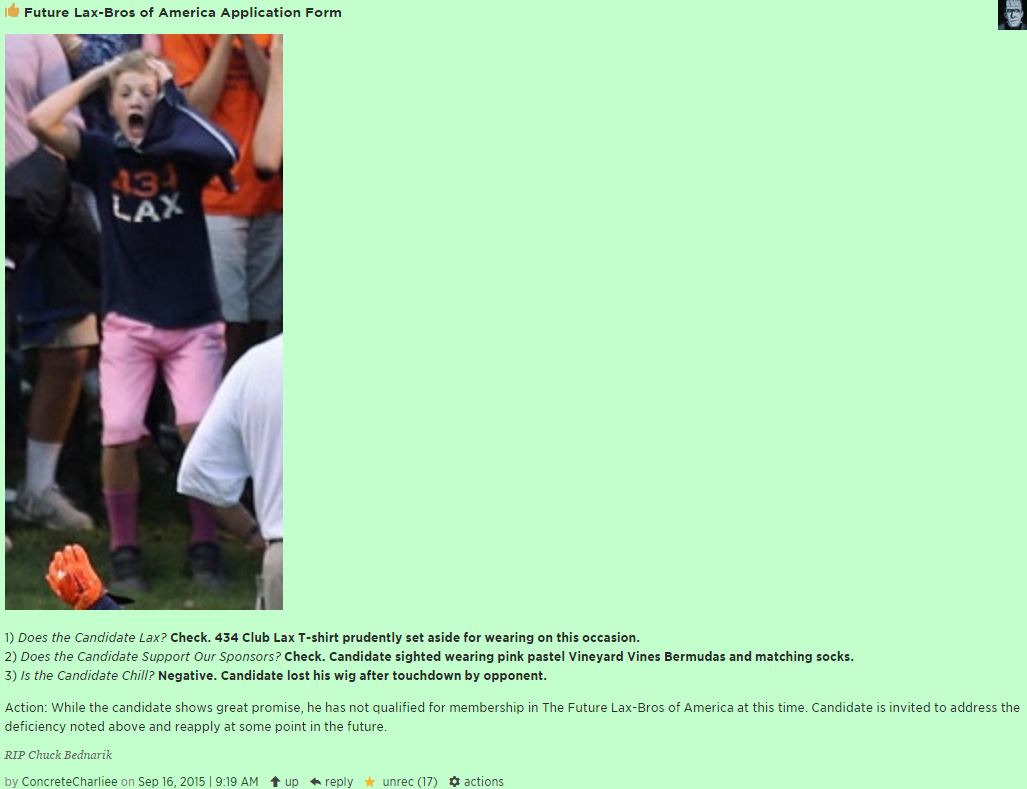 Kendall Moore's beer gut showed off some truly spectacular gif-making skillz. Seriously, man, this is a work of art (especially with the Portuguese cameo).

--First Down Moses combined Justin Yoon's chortle with one of the most schadenfreude-laden photos of the year: 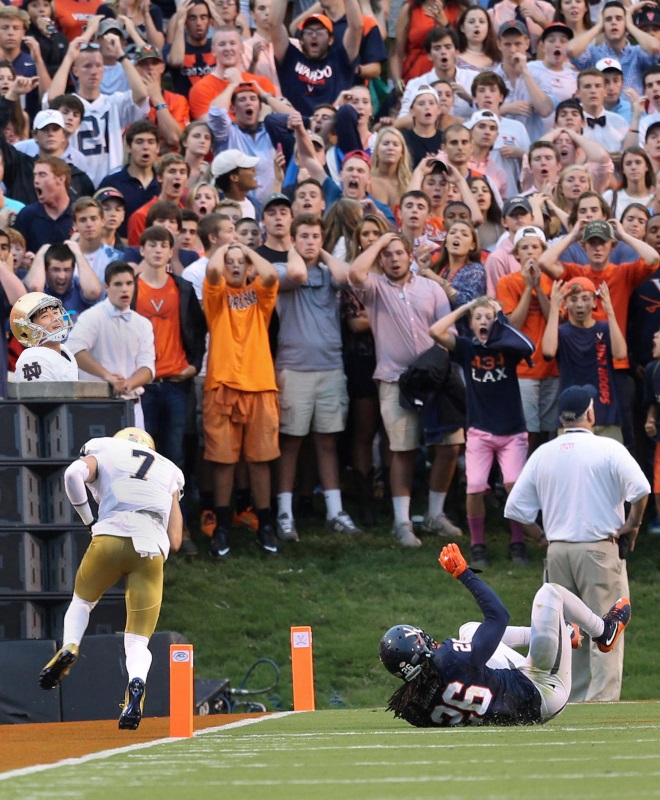 --And last but not least, our winner for this week (by virtue of winning the non-FDM tiebreaker) is Vince Miller, who made one heckuva TSW debut with some truly groan-worthy dad humor. Congrats, Vince! 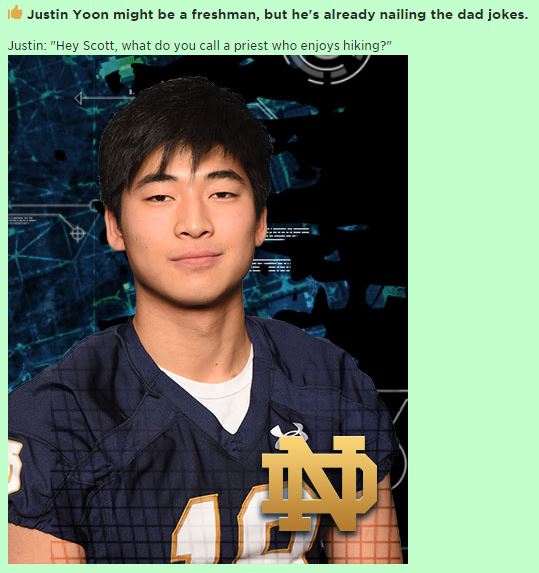 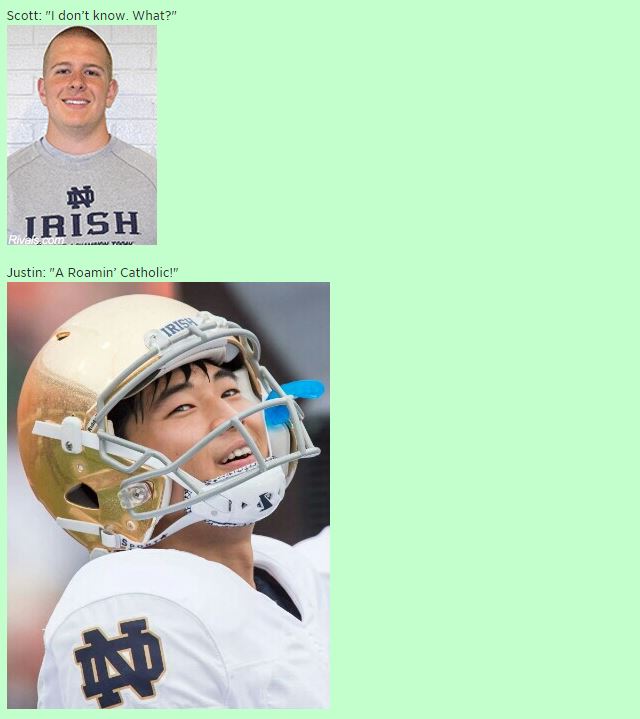 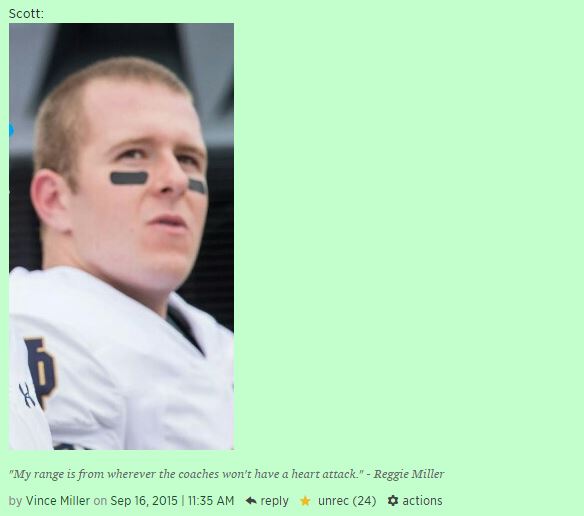 --In a down-to-the-wire race, the title of "Biggest NOPE" went to...sigh...freakin' spiders, man. 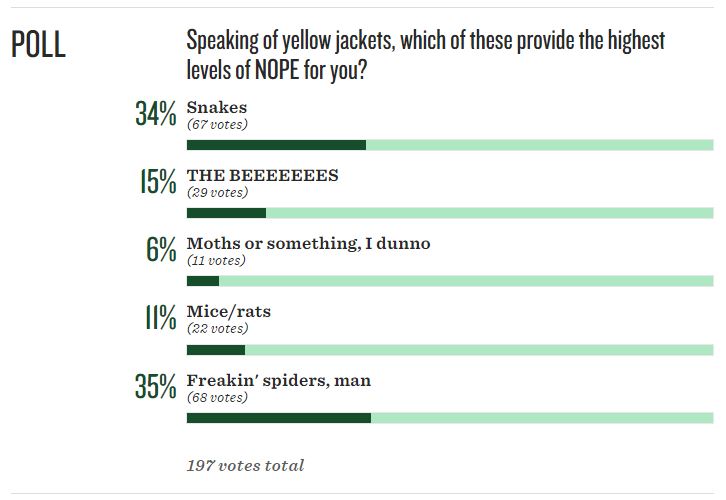 In our header photo for this week, Sheldon Day celebrates a thorough MAULING of a hapless Georgia Tech running back. Send in your best captions and photoshops for OFD glory!

[picture below is unrelated] 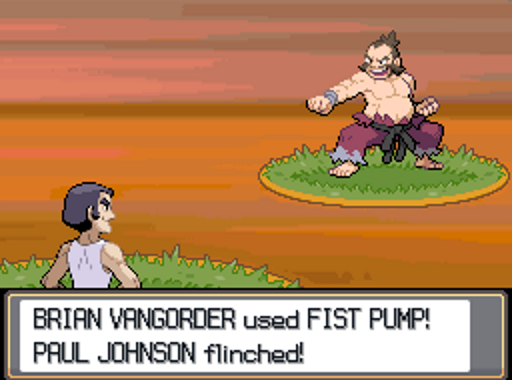