Our emotions may be a rambling wreck after last week's exciting finish, so let's recover with some lame puns and cheerful photoshops.

Folks, I wanted to make a pun here about our injury situation becoming a "rambling wreck." I really did. But to be completely honest, as much as it stinks to lose our starting QB and our starting TE (who is also a member of the Notre Dame Finer Things Club), this team is not spending any time feeling sorry for itself...so neither will I. Now, according to everything I've read, Georgia Tech has apparently been averaging eleventy billion points per game, so we'll have our hands full...but guess what? We can score some points as well, so it'll be aight.

Overall, we had a very successful first week of TSW! Two entries ended up tied for 2nd place with 16 votes apiece; one was Kendall Moore's beer gut's take on CBK's thoughts... 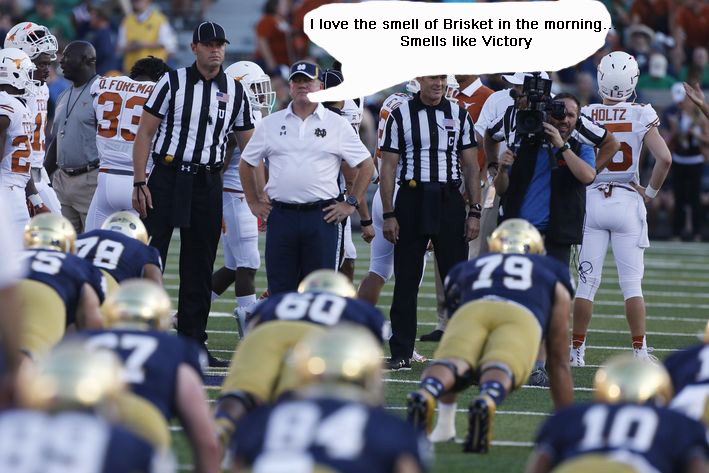 ...and the other one had GoldenGoalie offering a glimmer of hope for fixing our depth at quarterback:

But with 17 votes, the first TSW winner of the 2015 season is...Idocd, with Coach Kelly lamenting being overshadowed by the legacy of Lou Holtz (who's apparently standing right behind him in a Texas uniform...):

Congrats, Idocd! You've proven yourself to be quite the, uh, mustachioed swordsman!

Even with the thrilling last-second win over UVA, there was still a lot of doom and gloom and Eeyore-ing (including myself) following the injury news about Malik Zaire and Durham Smythe. But if you're feeling rather downcast, then our good pals Justin Yoon and Scott Daly are here to cheer you up! For this week's contest, caption and/or photoshop this image to your heart's content; and while you're at it, if anyone can identify the young man sitting next to Justin, we'd all be very grateful. haha I totally knew who that was.

Remember, have fun with this, and don't get discouraged with Team 127--despite all the despair, we're still undefeated, so let's stay that way!