It's no secret that Notre Dame struggled in short yardage situations against Virginia. In fact, I think it's fair to say that short yardage difficulties have been a reoccurring theme in the Brian Kelly era. Generally speaking, the coach has identified the root causes of these struggles as a combination of good defensive play and poor offensive execution.

However it's time to address the elephant in the room. Coaching. While Virginia played well and the Irish didn't always execute, the coaching staff deserves their share of the blame. They did a poor job setting the team up for success in short yardage situations against Virginia. Let's take a look at the film and I'll show you what I mean. 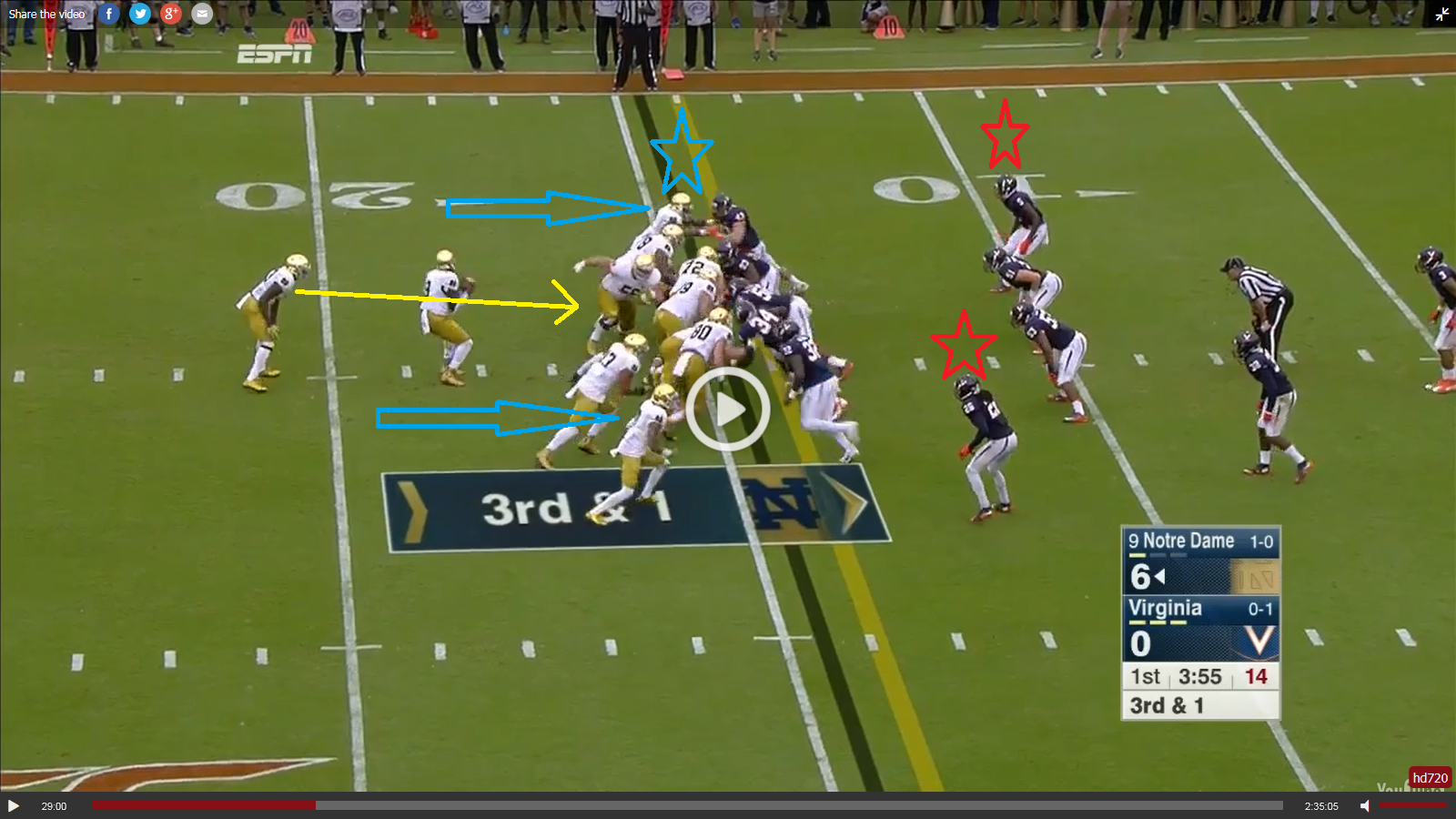 3rd and 1. The Irish are in a pistol formation. Josh Adams (# 33) will try and pound the ball between the tackles and get the first down (yellow line).

Here's the problem with this formation. Chris Brown (# 2) and Will Fuller (# 7) are tight to the offensive line (blue arrows). In fact, Chris Brown is going to be asked to block a defensive end on this play (blue star), not a great match up for the Irish.

By moving Fuller and Brown into the box, Notre Dame gains very little from a blocking perspective and loses a tactical advantage. It pulls two defenders (red stars) closer to the line of scrimmage and puts them in perfect position to play outside run. One of the reasons teams use shotgun / pistol formations in short yardage is to keep the defense honest. It's easier to pass out of these formations and it's easier to run zone read plays where the quarterback keeps the ball and attacks the perimeter. This threat of outside run is nullified by the cornerbacks on the edge of the defense. 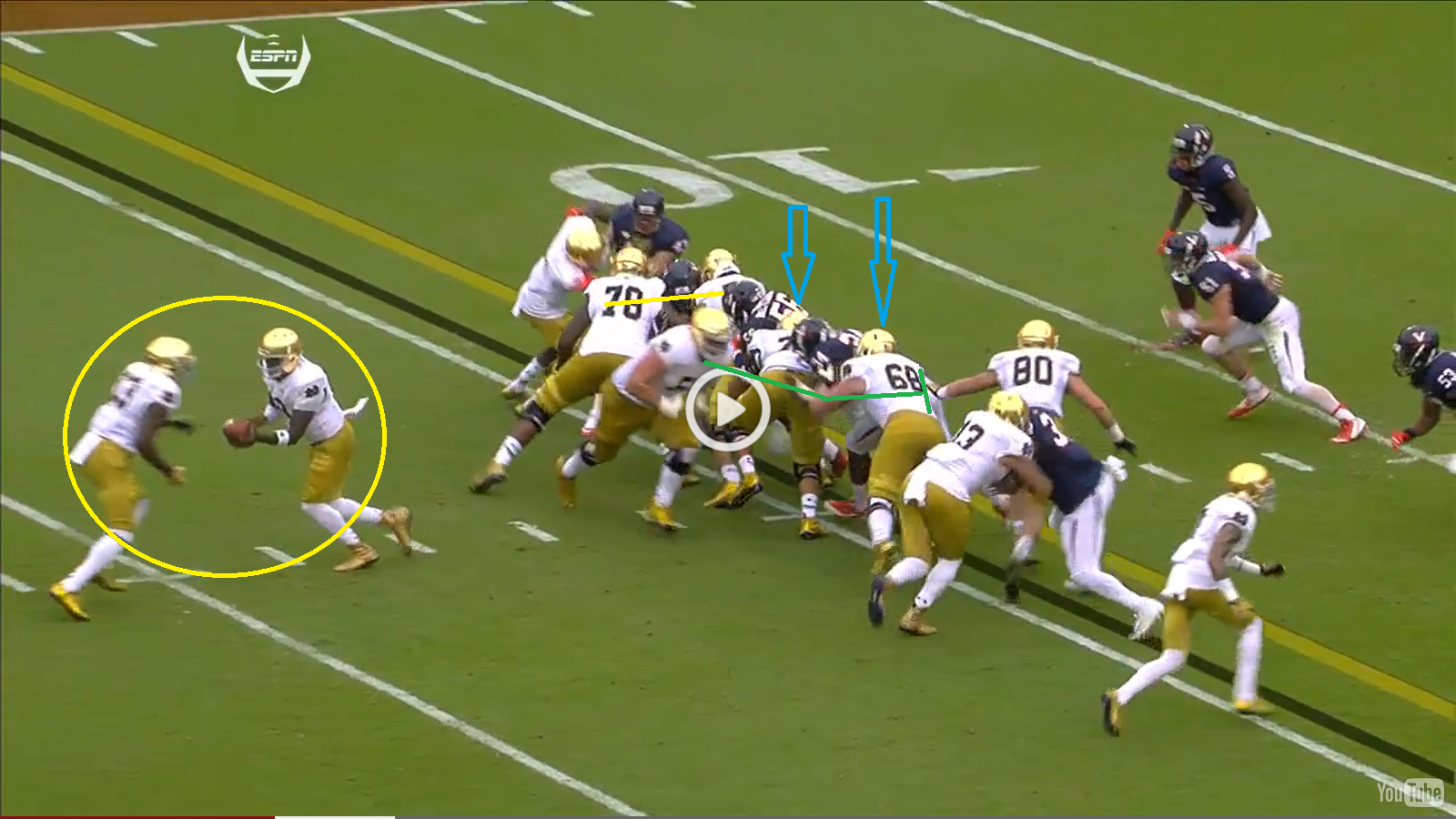 A fraction of a second after the snap. Note the blocking. The Irish are in pretty good shape. Mike McGlinchey and Steve Elmer (blue arrows) are washing their men down the line. Quenton Nelson is about to turn the corner and lead block (greeen line). Nick Martin and Ronnie Stanley have formed a wall (yellow line) on the backside.

If the timing on this play is correct, the running back should have the ball and be looking to follow Nelson through the hole. If that's the case the Irish are in pretty good shape. There's a decent hole and everyone is blocked. Instead, the running back doesn't have the ball yet (yellow circle) and is still an absurd 5+ yards away from the line of scrimmage. 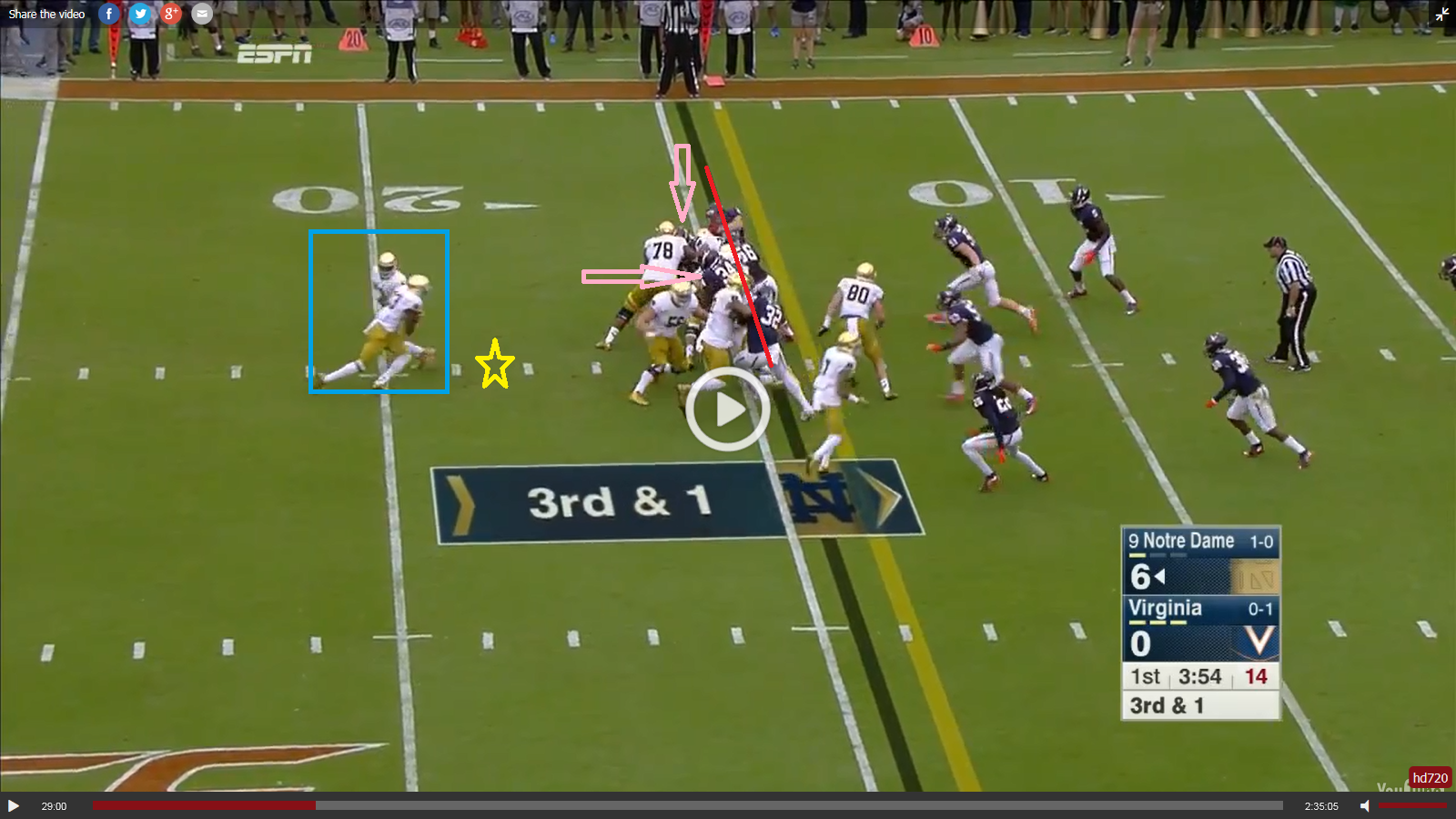 Finally, the running back has the ball (blue box). Malik Zaire (# 8) actually started at the yellow star and went backwards (yes you read that right, backwards) to hand the ball off. This is a painfully slow developing play. It's hardly surprising that the defensive line already has two players (pink arrows) on the other side of the line of scrimmage (red line). 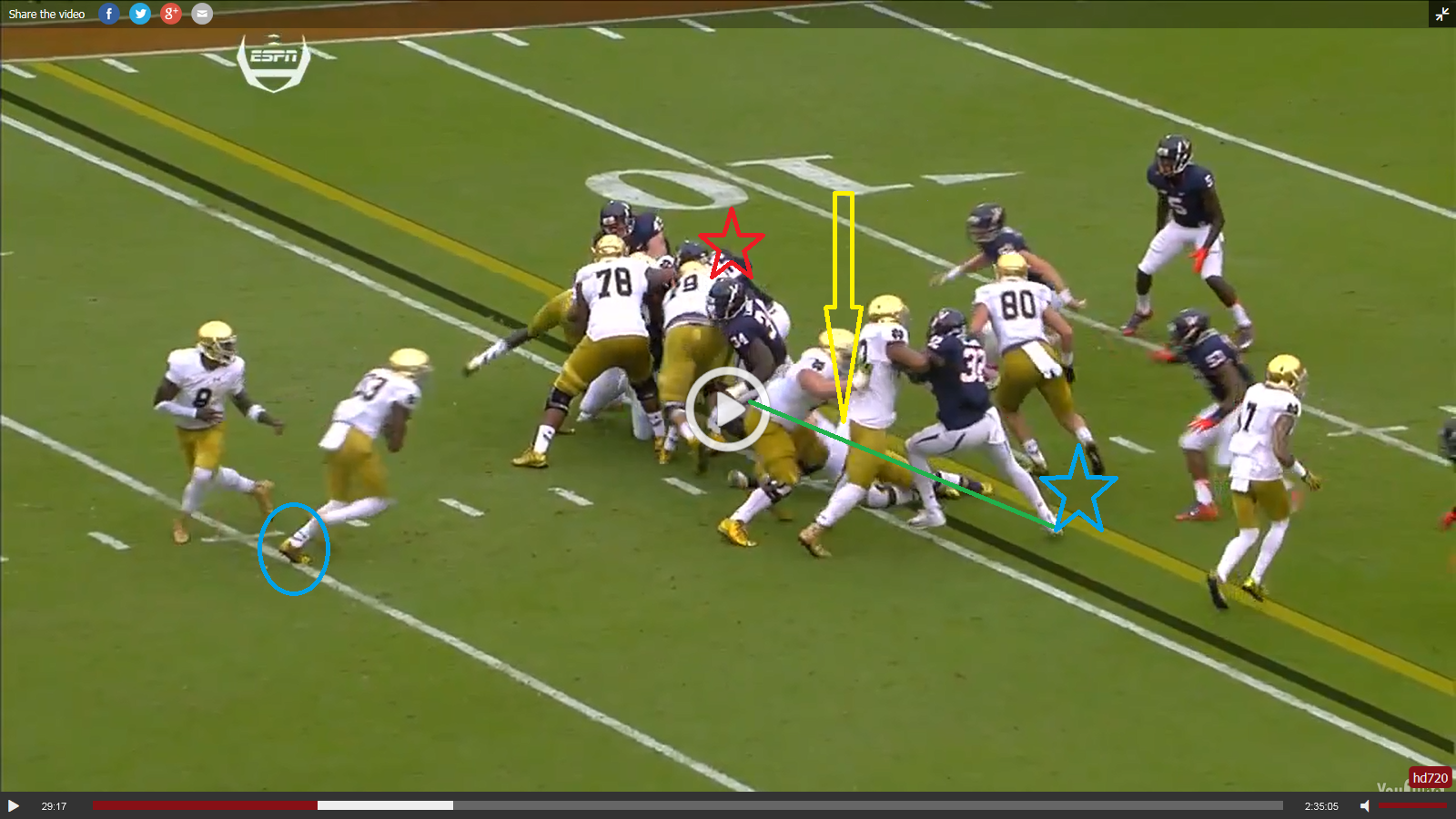 Adams has the ball, but look at his foot (blue circle), it's still on the 20 yard line. A full six yards away from the first down. This might be the slowest developing play in the history of short yardage.

Because the play took so long, McGlinchey was unable to hold his block and is on the ground (yellow arrow). The defensive end he was blocking (red star) is about to come free. No question that McGlinchey is partly to blame here, but the scheme did him no favours. The defensive end he was blocking started at the blue star. McGlinchey washed him a long way down the line (green line). If you move a defender that far out of his initial position (at the point of attack no less), you should be able to gain a yard. Unless of course you have just called the  longest developing play in the history of 3rd and 1. 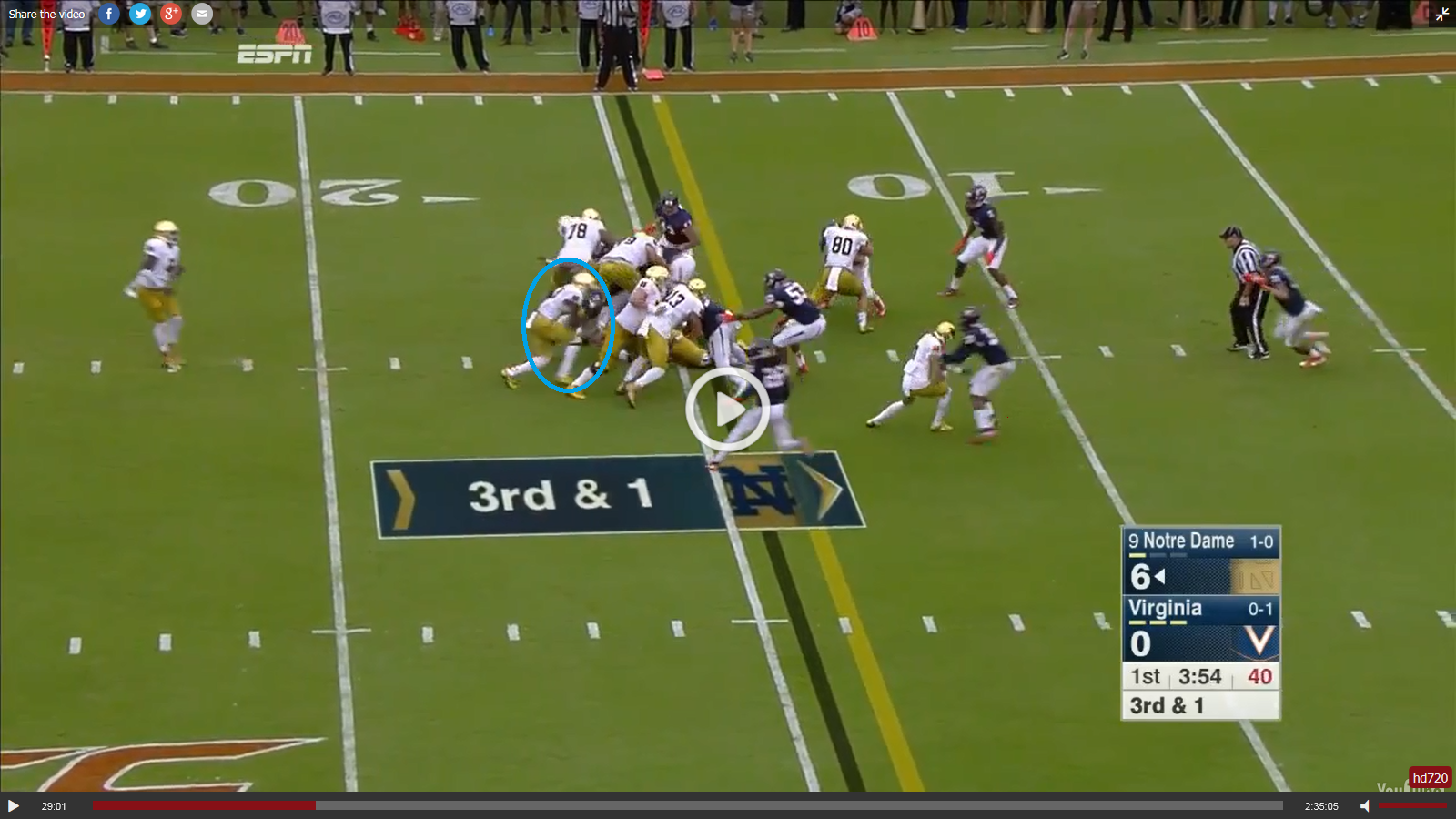 This play was doomed from the beginning. It's 3rd and 1, but Notre Dame loses yards before the ball is even snapped. The quarterback started 3.5 yards deep and then backpedals to 5 yards to hand the ball off. In what universe does this make sense? I realize I'm not an elite college football coach, but it seems pretty obvious to me that deep hand offs and slow developing plays aren't the best call on 3rd and short.

I know that many teams run pistol or shotgun in short yardage and have success. But wouldn't it be nice to take your big offensive line and your big quarterback and run a simple quarterback sneak? Isn't that a high percentage play? Isn't it necessary to impose your will sometimes? Instead we end up with the screen shot below. 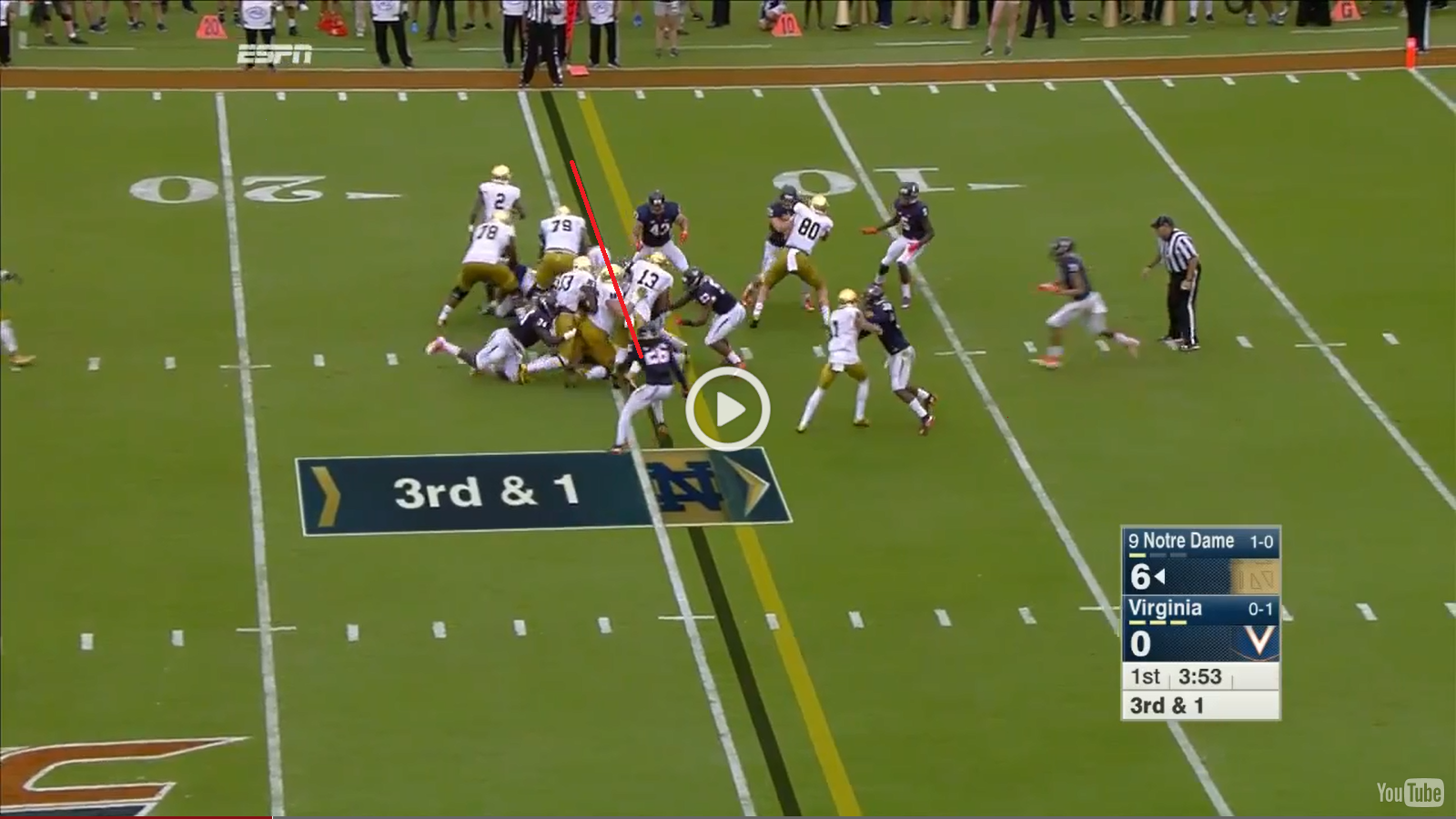 3rd and 1. The vaunted Notre Dame offensive line hasn't moved a single defender across the line of scrimmage (red line). Not exactly imposing our will.

The biggest problem on this play is the design. The hand off is too deep and the play takes too long to develop. Frankly, the Irish offensive brain trust needs to get short yardage figured out. They didn't put their players in a position to be successful against Virginia. With Georgia Tech and the option coming to town, Notre Dame is going to need to figure out short yardage situations, or it will be a long afternoon in South Bend.