Coming into the 2015 football season Ronnie Stanley is widely considered to be one of the best players on the Irish roster. In fact, many believe with a strong season, Stanley will be a top pick in the NFL draft next spring. Let's take a look at the film and see what the hype is all about. 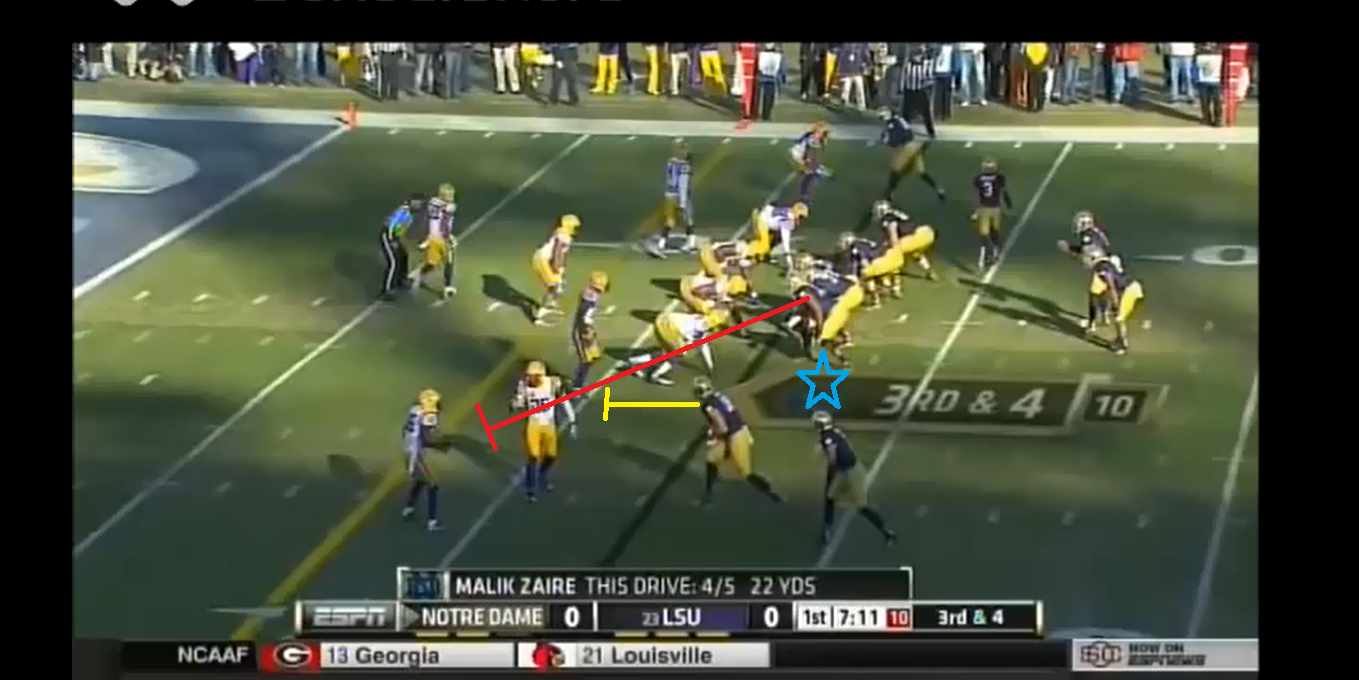 3rd down early in the bowl game against LSU. Notre Dame will throw a simple outside screen to Will Fuller (# 7, blue star). Stanley will be asked to throw a key block on the perimeter (red line).

It's crazy to think that at almost 6'6" and close to 320 lbs Ronnie Stanley would be asked to make this block. That's a long way to travel for such a big man. 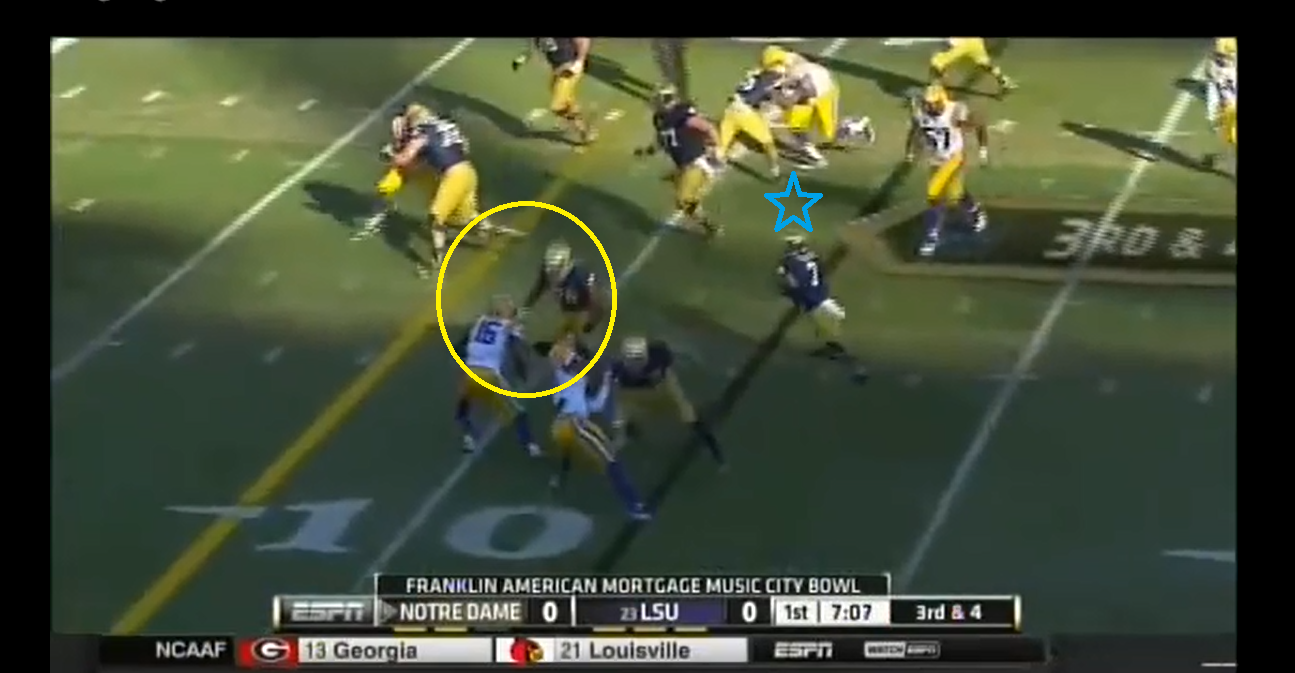 Stanley has closed this distance (yellow circle) and is in good position to clear the way for Will Fuller (blue star). 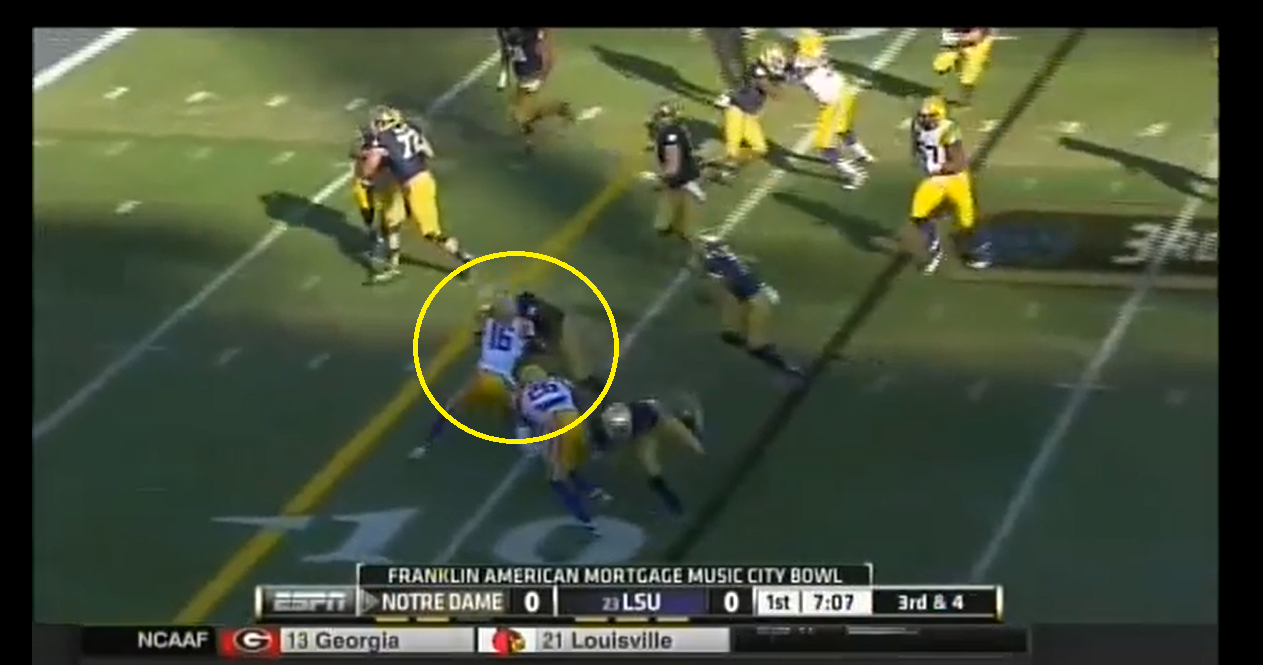 The block is made (yellow circle). 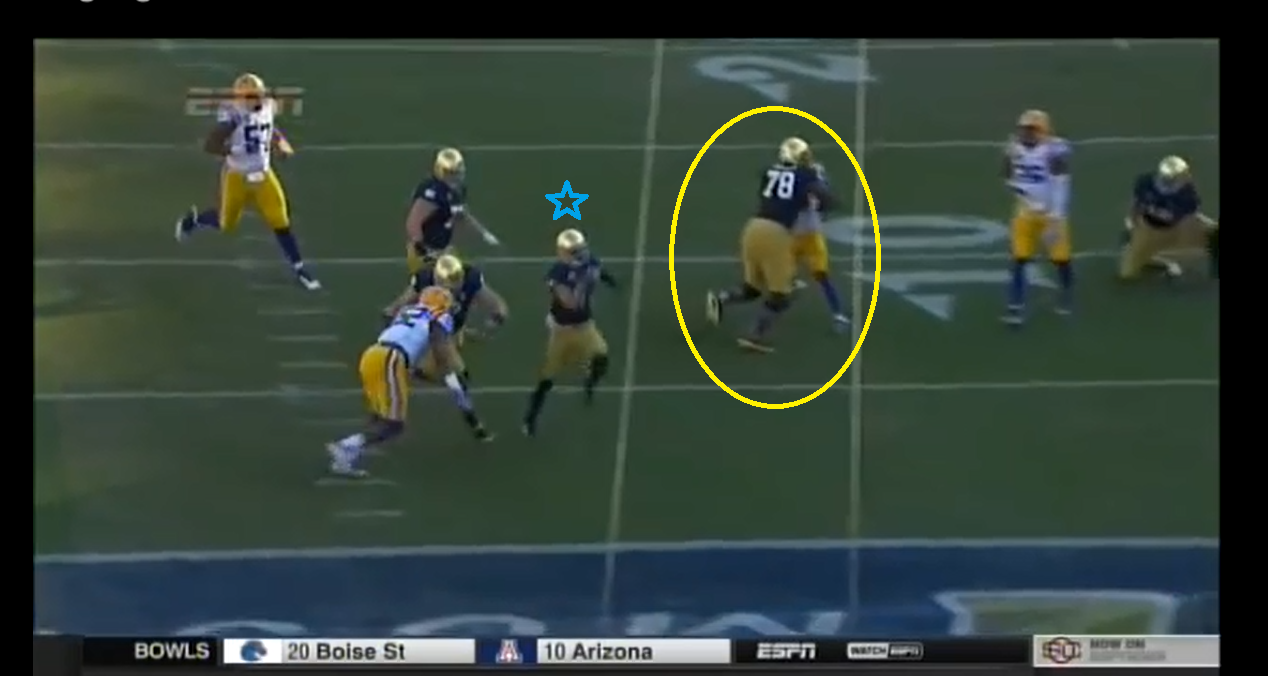 This is the type of play that has scouts drooling. Stanley displayed outstanding athleticism getting to the edge and used good technique to secure a block in the open field. But he wasn't satisfied with just making the block. Instead, he continued to move his feet and walled the defender off to prevent him from pursuing to the end zone (yellow circle). As well, he added in a little shove at the end of the play.  Athletic. Technical. Relentless. Topped with a little bit of nasty.

Obviously Ronnie Stanley is a very talented football player. Even so, he has elements of his game that could use some refinement. Let's take a look at one example.

A pretty standard run play. The back will follow the yellow arrow. Stanley will need to block a defender who is aligned to the inside (blue line). 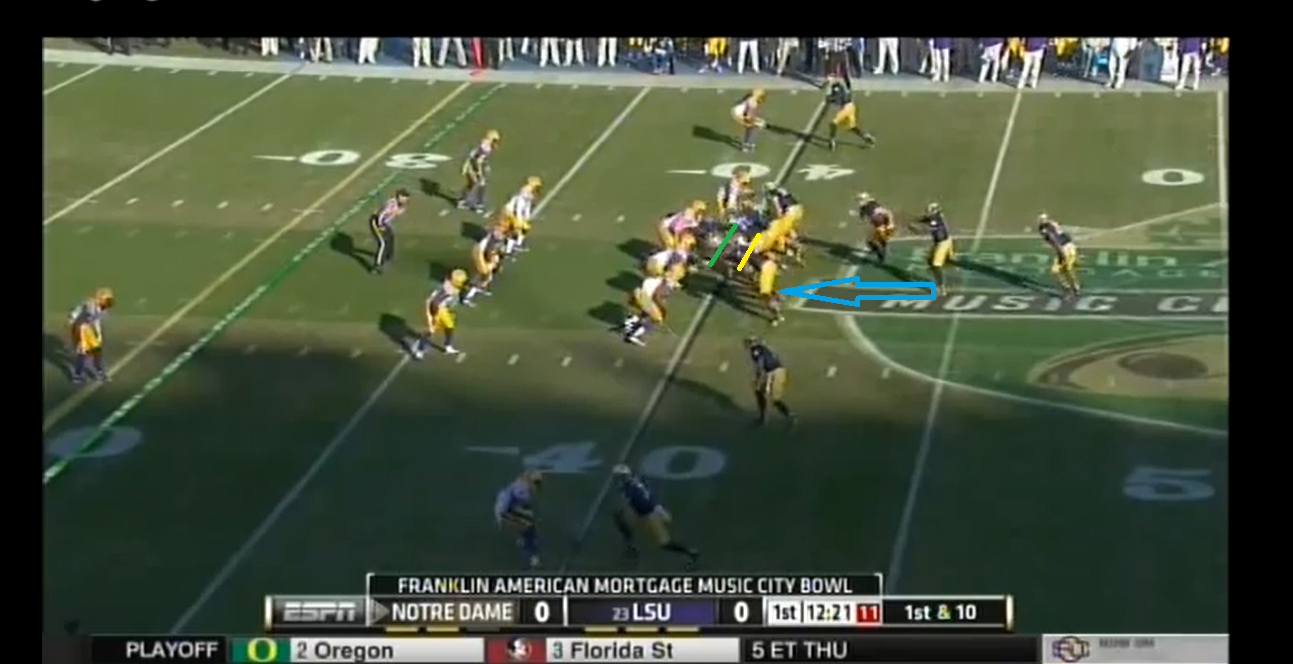 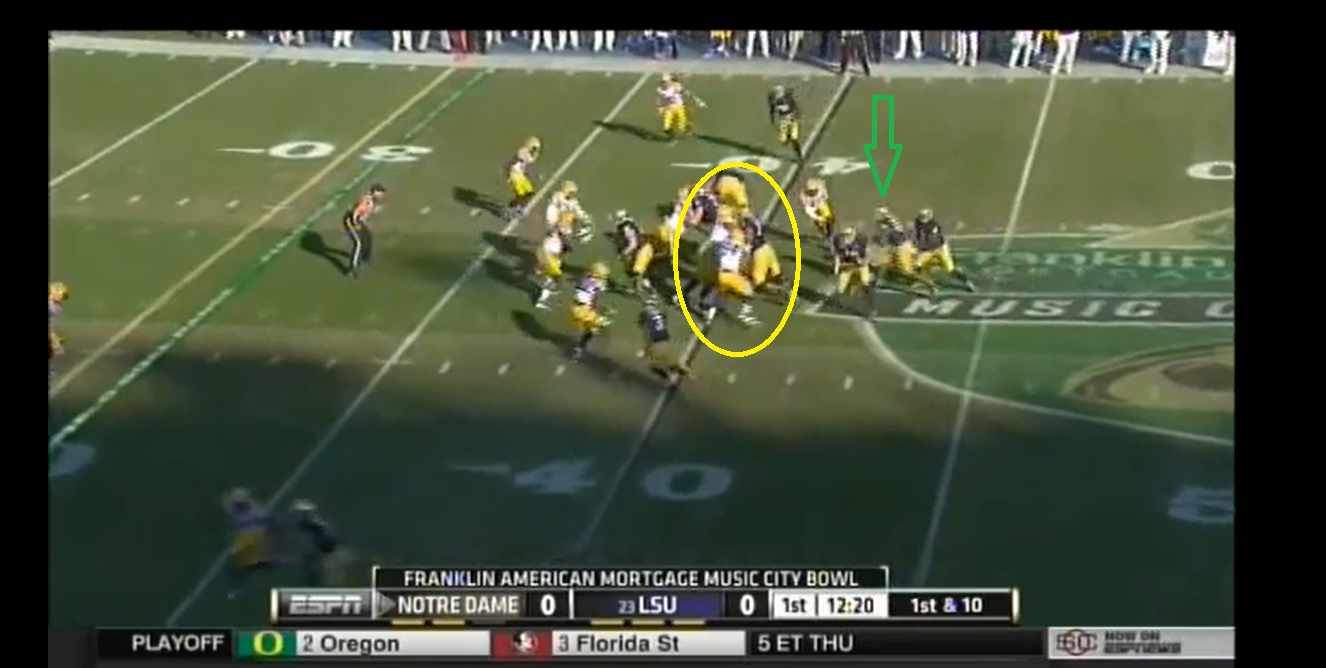 You can see how tall Stanley is in this screen shot (yellow circle). Poor pad height leads to less power, which results in Stanley being pushed back behind the line of scrimmage. This leaves very little room for the ball carrier to maneuver (green arrow). 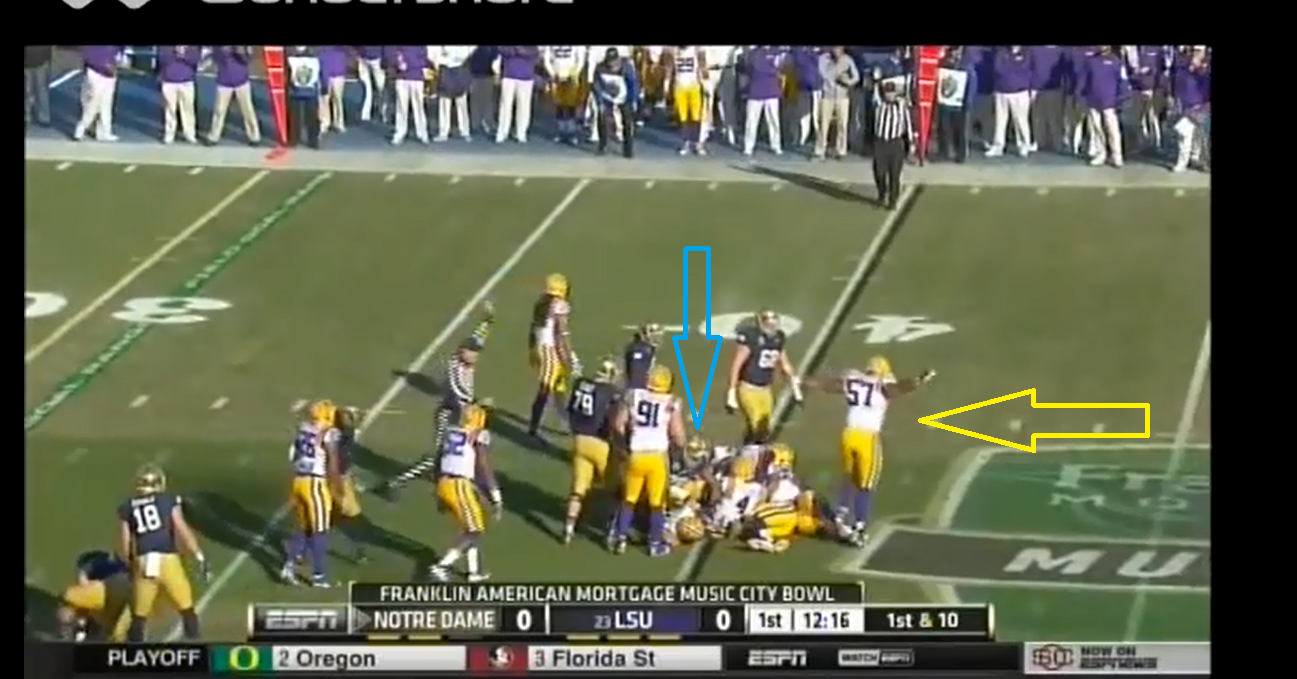 That's Ronnie Stanley (blue arrow) looking like a woolly mammoth sinking in a tar pit. And that's the player he was responsible for blocking in the midst of some sort of "look at me, I'm flying" celebration after helping to stop the run play for little to no gain (yellow arrow). It should be noted that # 57 for LSU really didn't make the play, he jumped on the pile at the end and consequently was the first one off and able to celebrate. Usually that's a move reserved for defensive backs.... but I digress.

In watching the film, I saw Stanley "play tall" like this on a few occasions. It's something that I'm sure he (and his coaches) will be working hard to correct next year.

As an aside, I was going to break down some examples of Ronnie Stanley in pass protection but decided not to. Primarily because it was kind of boring. He's really good. Like, really, really good (that's the technical description). It would have been a lot of screen shots of Stanley in perfect position and the defender basically stopping his rush trying to figure out what to do.

Ronnie Stanley has all the physical attributes necessary to be an elite offensive lineman. He is excellent in open space, is a dominating pass blocker and when his pad height is correct, he is a very strong run blocker. Having said that, he's not a finished product. A little more time under coach Harry Hiestand will allow him to fine tune his game. If he continues to improve... look out.