I think you're going to be surprised by this. I was.

A few months ago I was watching film for a post about Joe Schmidt. As I reviewed one of the screen shots I noticed something really odd. 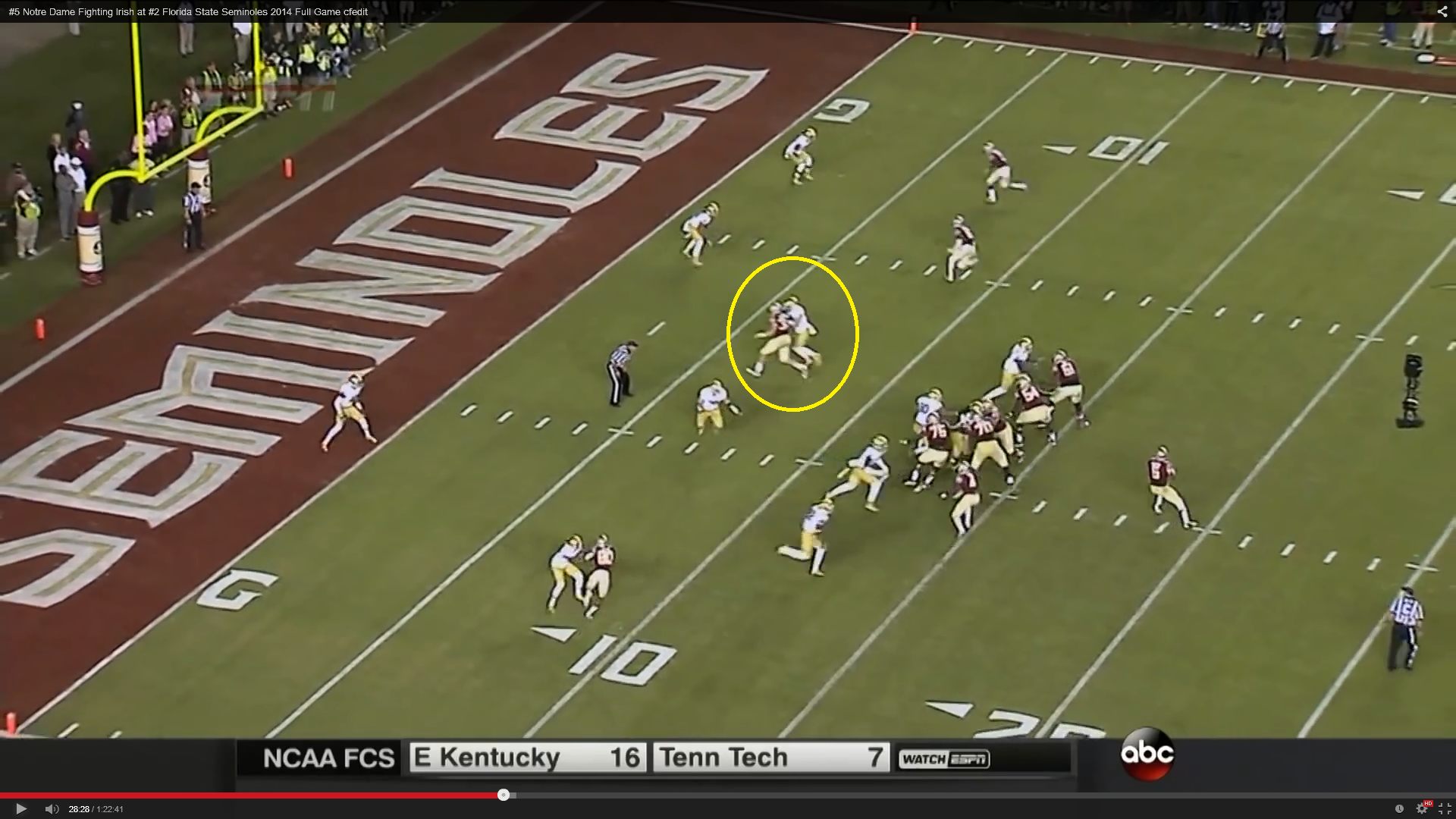 Freshman defensive end (yellow circle) Andrew Trumbetti was covering Nick O'Leary in the red zone. I wondered if this was by design or an anomaly. It seemed odd to have any defensive end (let alone a freshman) cover the most prolific receiving tight end in FSU history.

Last week I re-watched the FSU game and focused my attention squarely on Andrew Trumbetti. I quickly discovered that this play wasn't an anomaly. Trumbetti was tasked with covering the tight end on a number of occasions against FSU. This seemed like a good starting point for a post highlighting the young defensive end's versatility. To demonstrate this I could show him covering the tight end, playing the run and rushing the passer. To be honest, I didn't expect to be overly impressed with the other aspects of Trumbetti's play. I had him pegged as a player who was solid but not flashy. As a result, I assumed I would have to sift through a number of plays (and possibly games) to find suitable examples for the post.

Boy was I wrong. In fact, in the first full series I watched Trumbetti play against FSU I was blown away. On consecutive plays early in the second quarter, he demonstrated the ability to stop the run, rush the passer and cover the tight end one on one.  It's rare that any defensive end can do all of these things at high level in college football. It's even less common for a freshman to be able to do all of this, especially against the defending national champions. 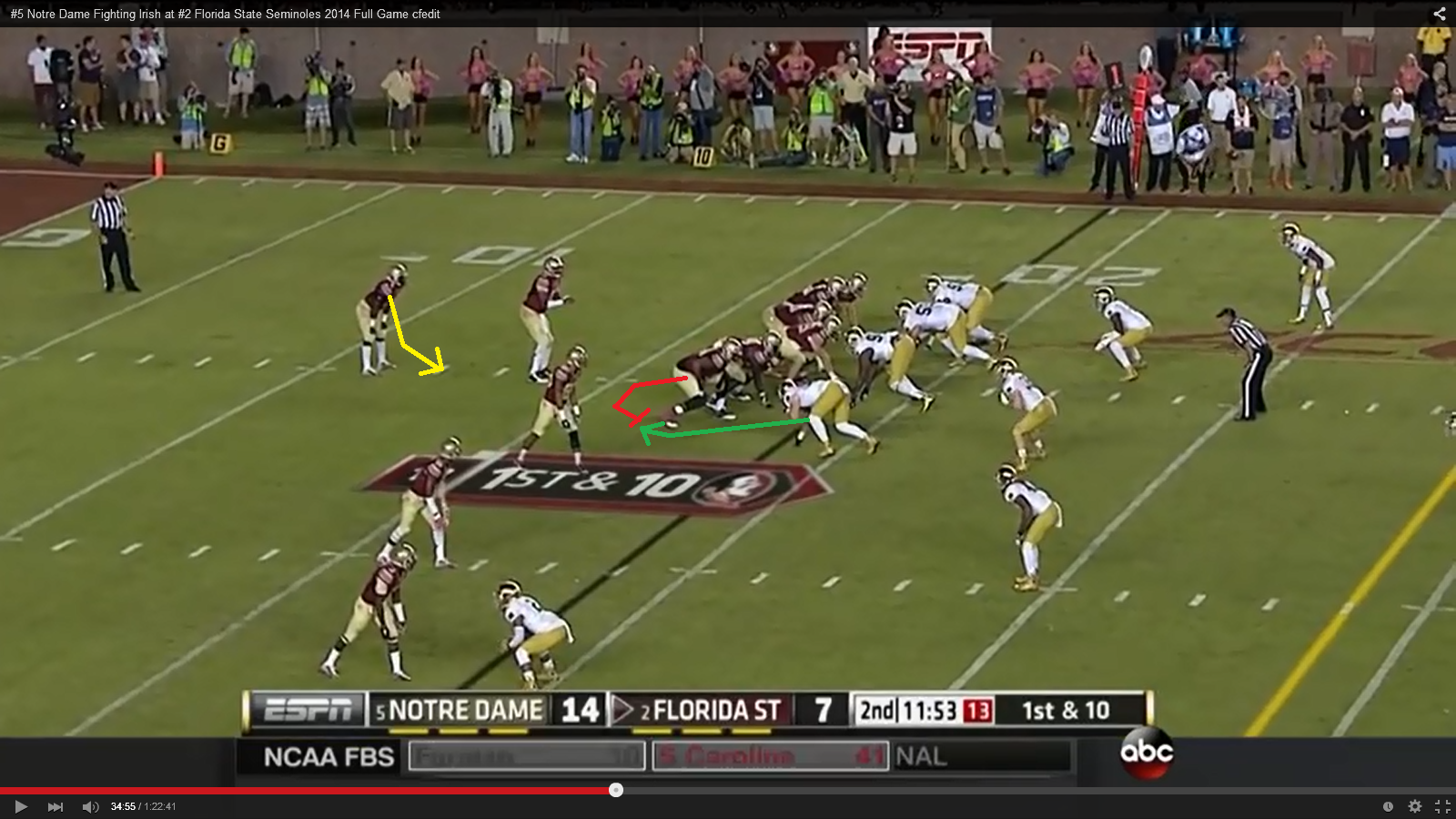 1st and 10. FSU will run the ball. The back (yellow arrow) will read the block of the offensive tackle (red arrow). If the tackle can seal the defensive end, the play goes to the outside. If he can't, the running back will cut inside.

Trumbetti is responsible for setting the edge of the defense (green arrow). His primary responsibility is to make sure the ball carrier doesn't get outside. 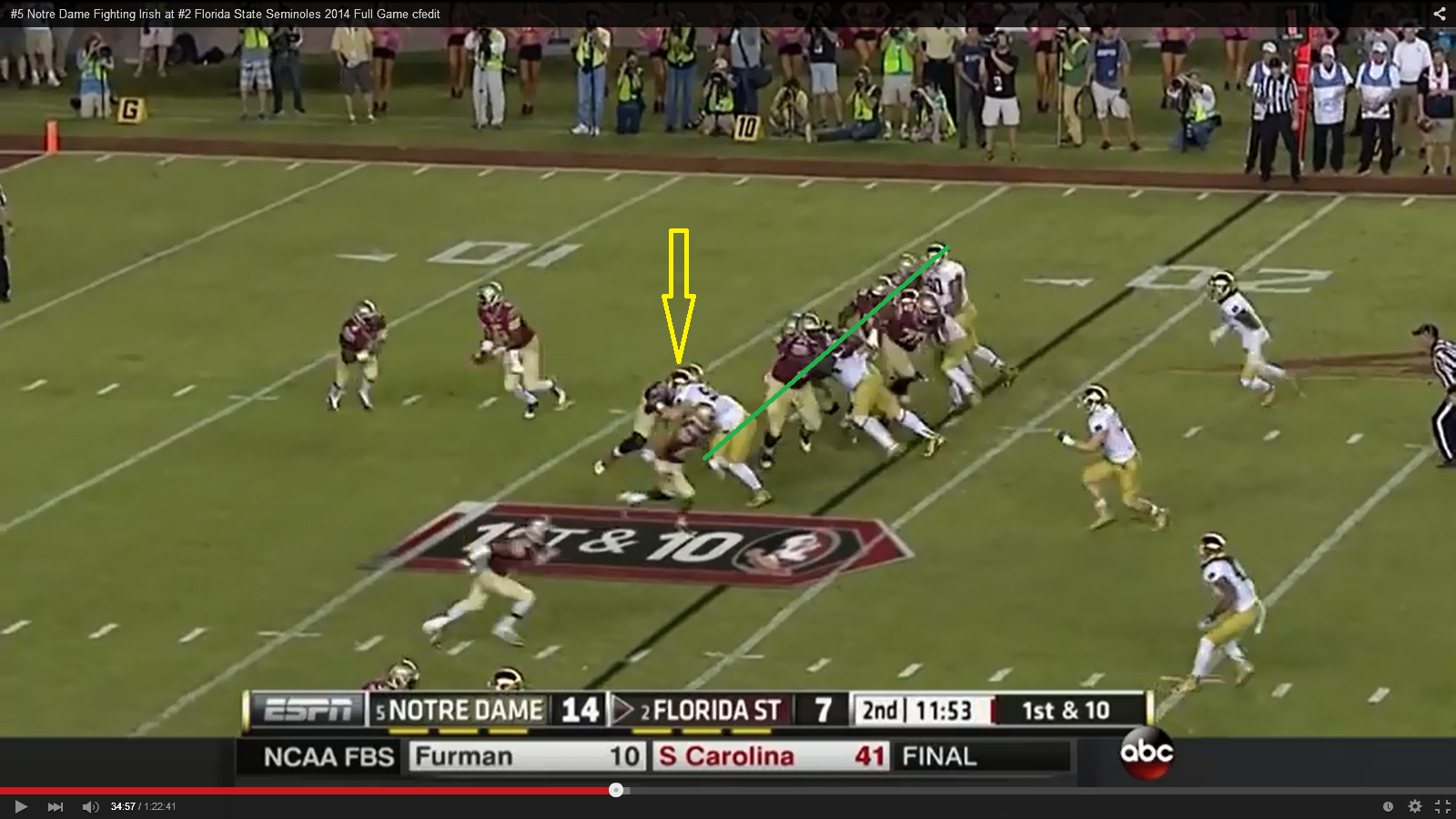 A fraction of a second after the snap. Trumbetti has done a great job getting off the ball and has made the most up field progress of the Irish linemen (green line).  Trumbetti's head placement (yellow arrow) is  exactly where it should be, to the outside. He's in good shape to set the edge and force the play back inside. 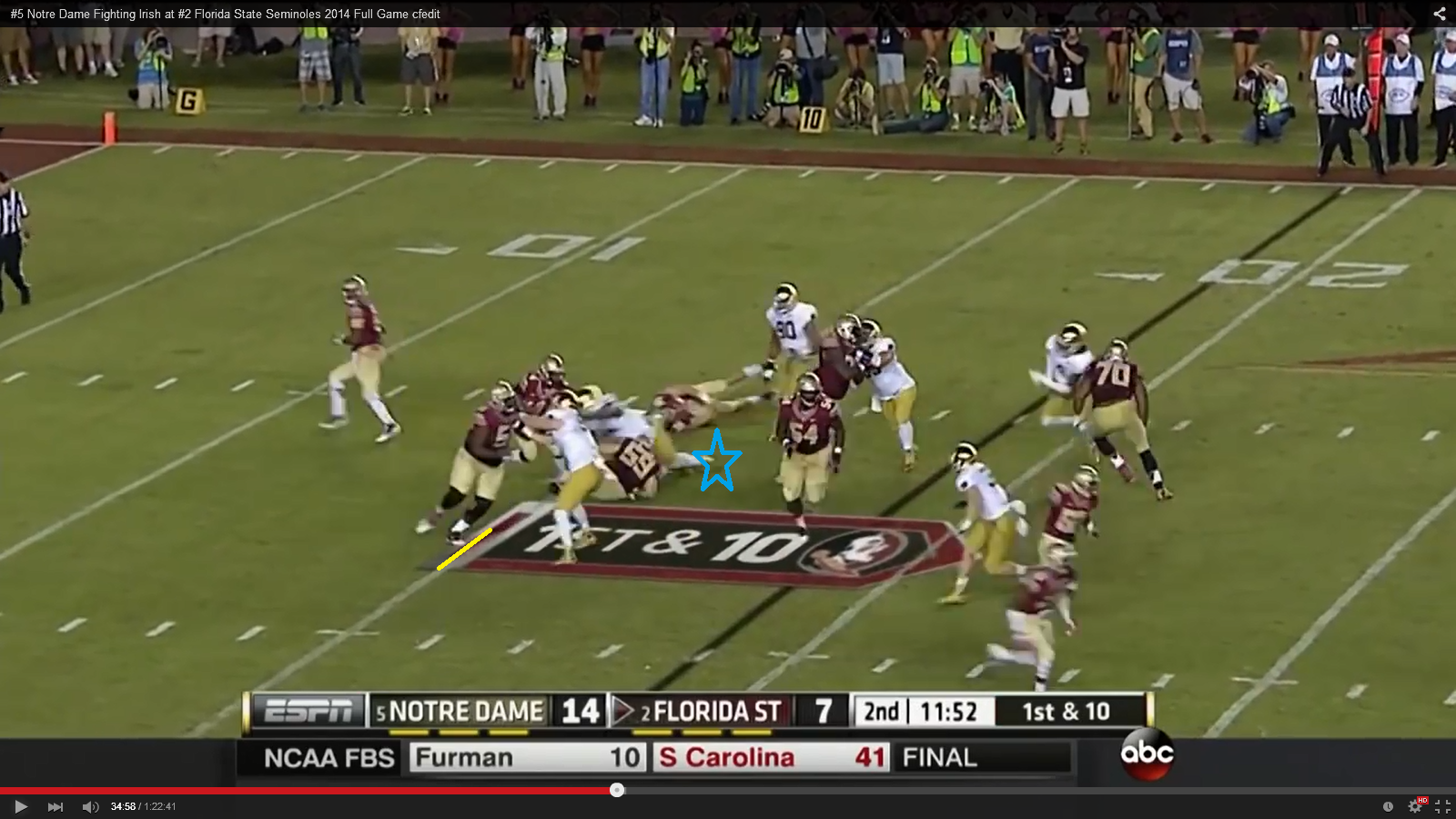 Trumbetti made initial contact roughly where the blue star is. He's pushed the offensive tackle backwards (yellow line), sealed the edge and forced the run inside.

Although Trumbetti ultimately doesn't make the tackle, this is a really good play. He uses quickness and technique to defeat the block and then power to displace the offensive tackle, set the edge, and finish the play. Pretty nice effort from the freshman.

Pass coverage from a defensive end? 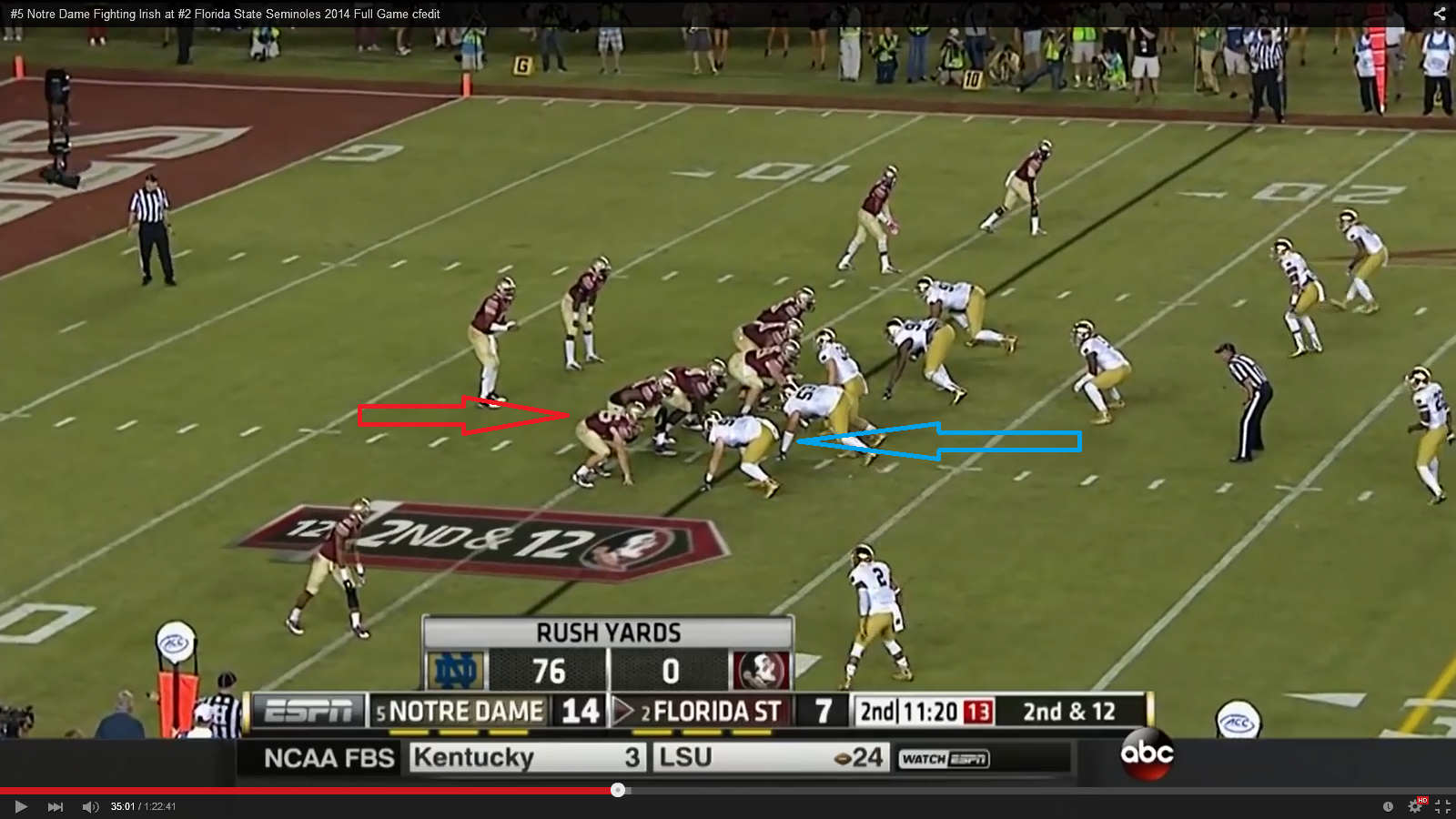 2nd & 12. Trumbetti (blue arrow) is lined up over tight end Nick O'Leary (red arrow). At this point it doesn't appear Trumbetti will have coverage responsibilities on this play. 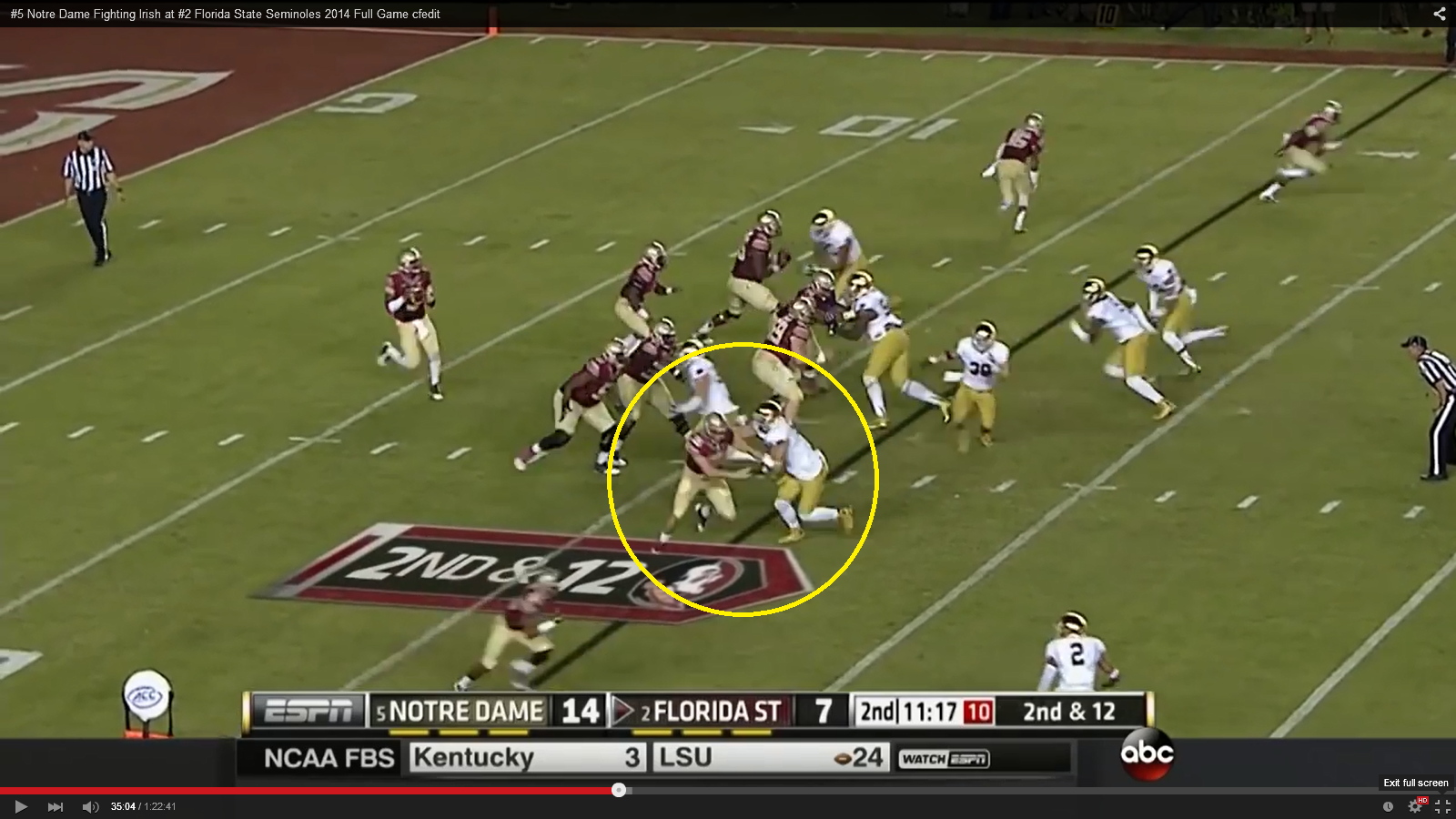 Trumbetti jams O'Leary at the line of scrimmage, (yellow circle), still nothing out of the ordinary. 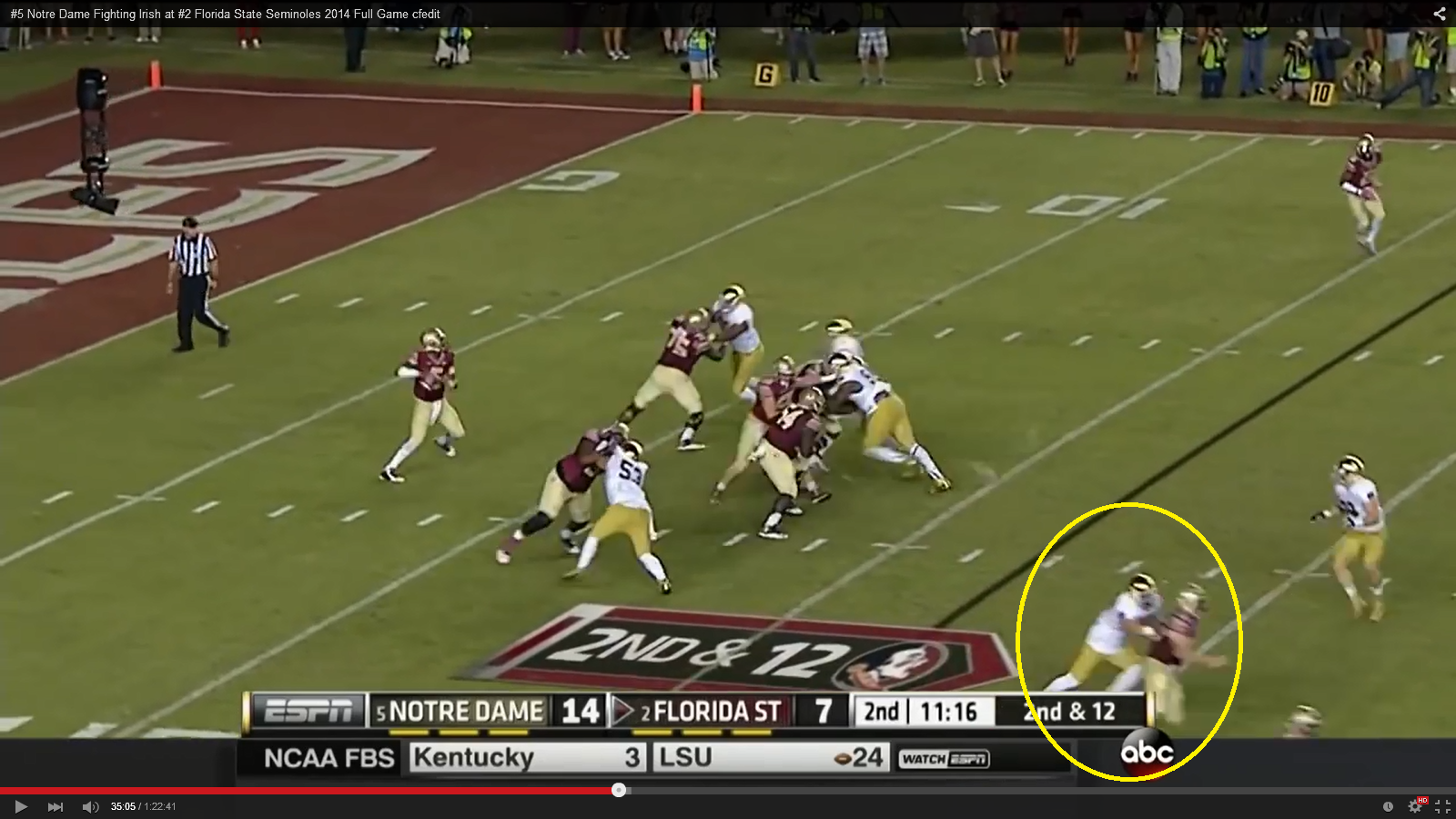 This is where we go off script. That's 255 lb freshman Andrew Trumbetti running down field in coverage (yellow circle). For the record, O'Leary is no slouch. He ended up winning the John Mackey award as the best tight end in college football. Pretty impressive athleticism from a defensive end. 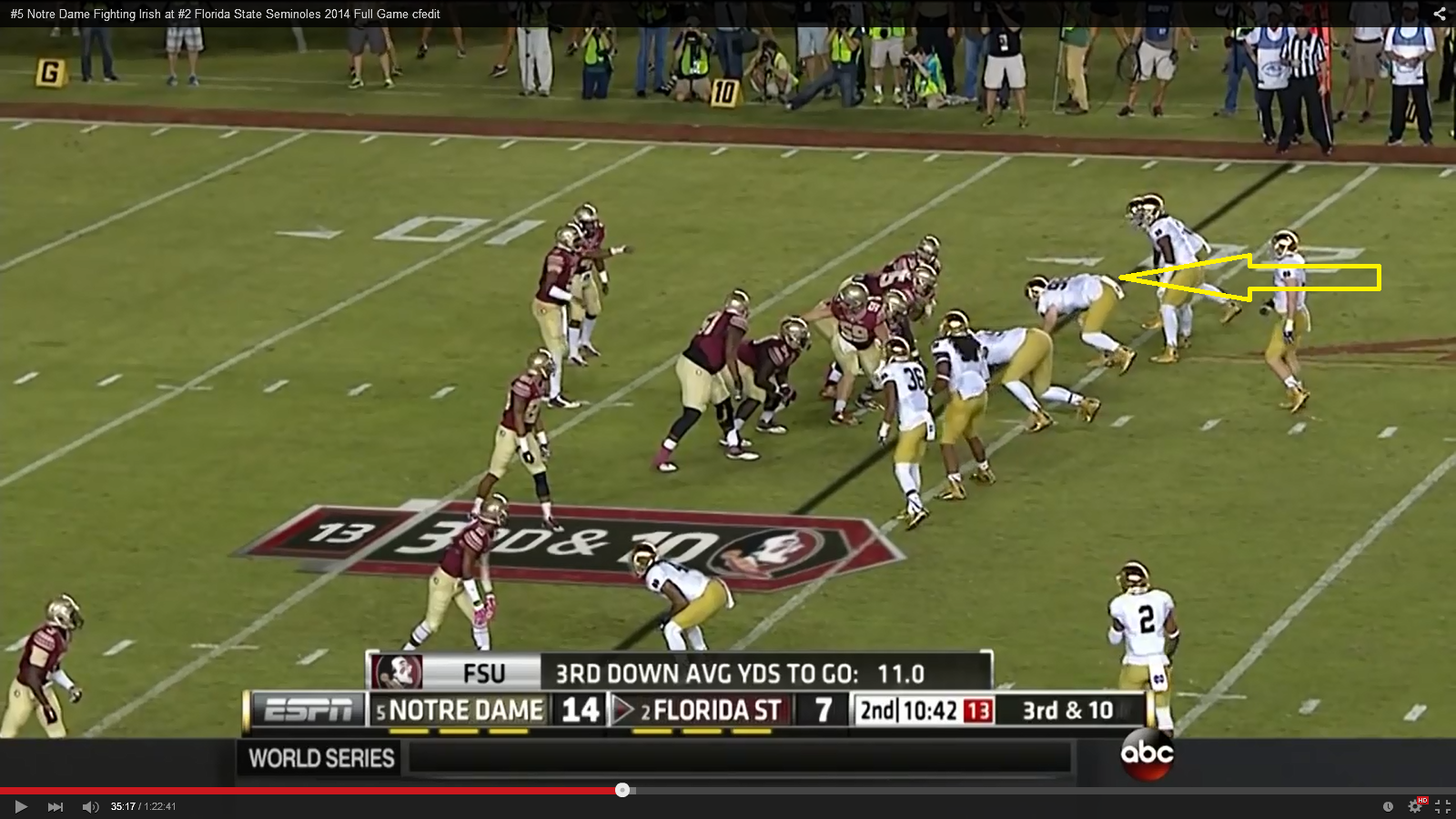 3rd & 12. Time to get after the quarterback. This is where defensive ends make a name for themselves and Trumbetti (yellow arrow) is ready to go. 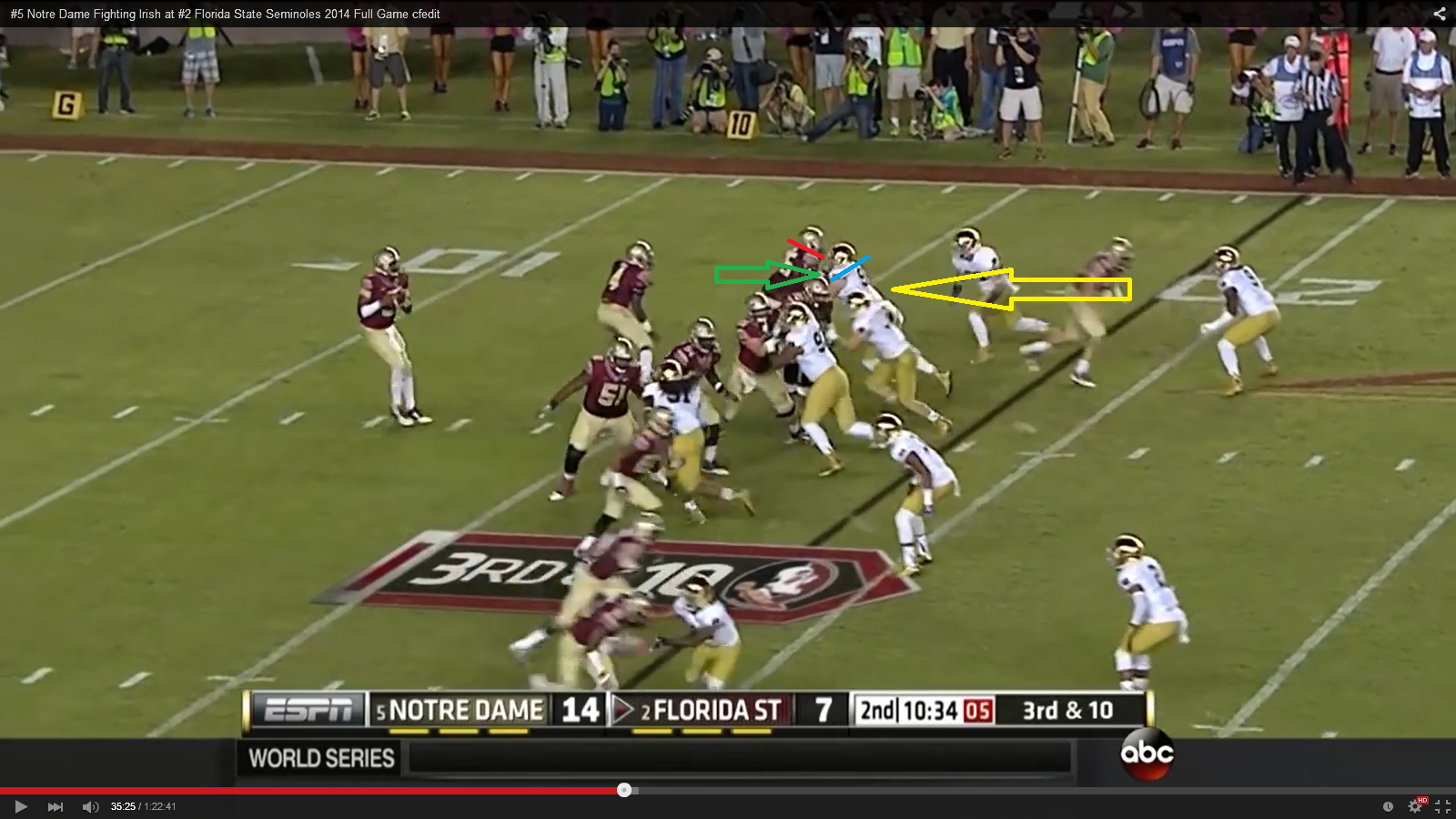 After the snap, Trumbetti (yellow arrow) is in a strong position. His pad height is good (red line vs. blue line) and his hands are inside (green arrow). 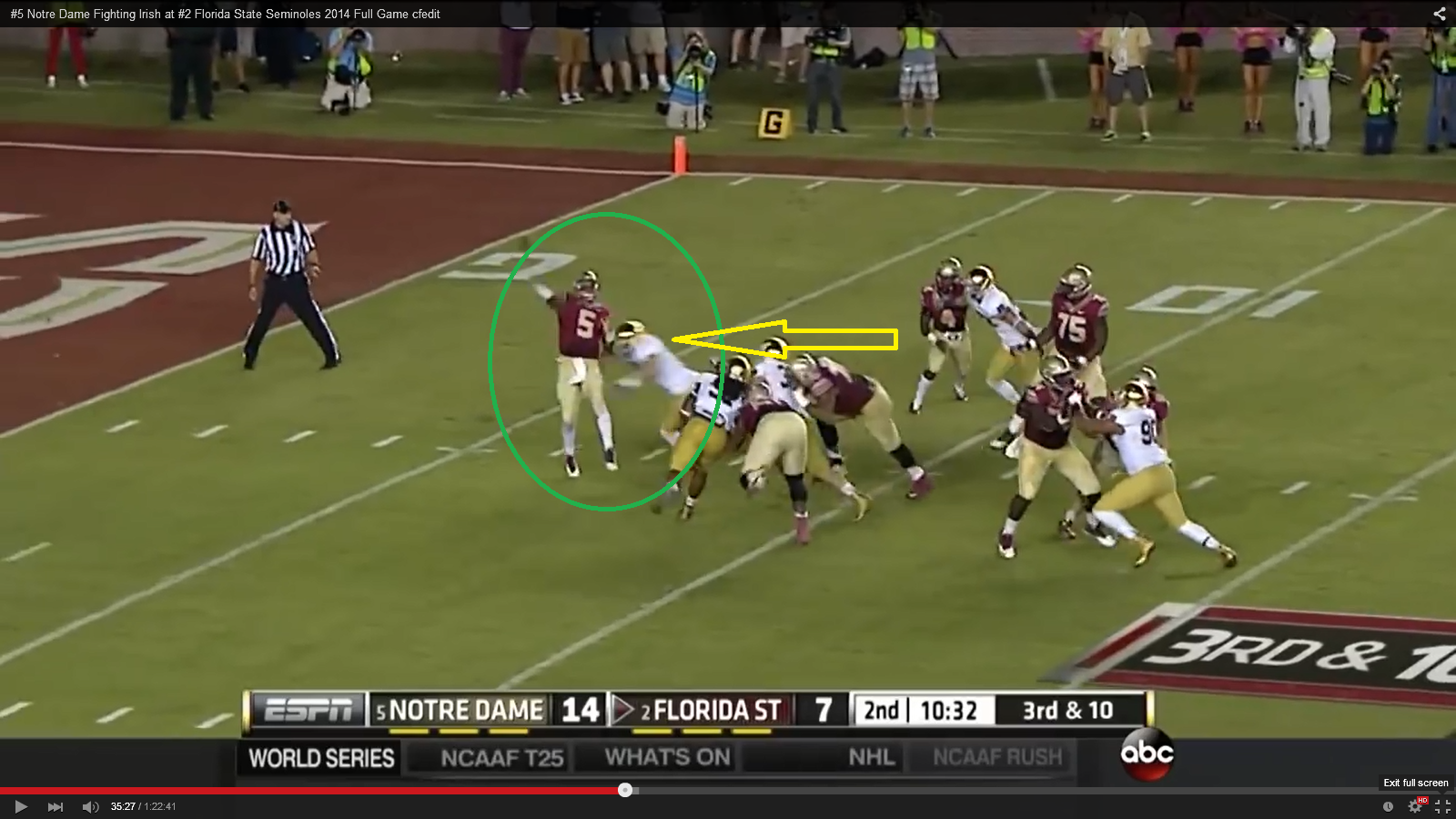 That's Trumbetti (yellow arrow), about to hit the quarterback (green circle) and force an errant throw.

One caveat on this play. When you watch the video, you will notice that the offensive tackle who initially engages Trumbetti mistakenly passes him off to the guard (who is blocking a blitzing linebacker). No doubt, this made it easier to get to the quarterback. Even so, when you watch the film you will see Trumbetti get  off the ball quickly, use good technique and accelerate to the quarterback.

3 really good plays in a row by a freshman against the defending national champions. Enjoy.

1st down, defeat a block and set the edge on a run play to help secure a 2 yard loss. 2nd down, cover one of the best tight ends in the country man to man. 3rd down, pressure (and hit) the quarterback forcing a bad pass. This is the type of versatility we expect from a freak athlete like Jaylon Smith. Instead it's what Andrew Trumbetti did against Florida State on consecutive plays. Pretty impressive. Keep an eye on Trumbetti this year, he might just surprise you.