Honeymoon in Vegas - ND's Class of '15 Makes Their NBA Debuts

Jerian Grant and Pat Connaughton had their first taste of NBA competition in the Las Vegas summer league over the weekend. OFD reads the early tea leaves to see how these former Irish greats will make the leap in to pro ball.

Share All sharing options for: Honeymoon in Vegas - ND's Class of '15 Makes Their NBA Debuts

Before we get this thing going in earnest, let's throw out the large, but necessary, disclaimer: we're talking about summer ball. There are zero players on the floor in Orlando, Utah or Vegas summer leagues that have NBA starting experience. What the NBA's summer leagues represent are an opportunity for draft picks and guys 8-14 on the roster to get some time on the court and showcase their skills. The two heroes of Notre Dame's magical 2015 run are both in Las Vegas trying to make great first impressions with their clubs and the fans. Let's take a look at how they fared in their first go around.

Fitting his confident style, Jerian has said this summer is about establishing himself as a starter for the Knicks. Armed with the security of an approximately $4mil, 3-year guaranteed rookie deal as the 19th pick in the draft, Grant isn't fueled by making the roster, but by making an impact. Of course, from a media perspective, Grant's debut was overshadowed by the introduction of his fellow draftee Kristaps Porzingis. The Latvian big man made his first appearance in a U.S. arena , and all eyes were on the #4 pick in the draft.

Versus the summer Spurs, led by San Antonio assistant coach Becky Hammond, Grant was in the starting line-up for the Knicks and took up most of the ball handling duties. I was able to watch this entire game on the DVR, and I think it would be fair to classify it as an up and down performance in the Knick victory. I loved that he came out of the gates firing. He had two open looks early that just rattled in and out. When it was clear he wasn't hitting from deep, Jerian started attacking the rim and getting himself to the FT line. Nine of Grant's 12 points were amassed on 9-10 shooting from the FT line. The other three came off a banked desperation heave at the end of a shot clock. Grant also put up 3 assists and found his teammates a lot of clean looks that just didn't drop. Summer shooting rust held down his overall assist total, but he looked very competent running the team. There were one or two instances where he needed to adjust to the 24 second shot clock when setting up ISO's or calling for ball screens late in the possession, but he had a great assist on a high PnR and got to the rim effectively the entire game. Defensively, he was able to stay in front of his man, but he spent much of the game guarding guys who were looking for catch-and-shoot spot-up's vs. attacking the rim. He was credited with two steals, but made several other defensive plays that led to Spurs turnovers. Grant also grabbed 5 boards, 4 of them on the defensive end, including a few critical ones late in the fourth to help the Knicks secure the victory. In what was an overall successful debut, even Jerian acknowledged that he suffered from a few uncharacteristic turnovers.

I think it is fair to chalk Grant's 1-6 shooting from the floor in the first game to nerves, and I think we'll see his shooting numbers steadily rise as he acclimates to the clock and style of play. Knick fans and management seemed to be pleased with Grant's performance as they noted his ability to help New York get out in transition and use his court vision to find some easy offense. It remains o be seen what happens when things grind to a halt offensively during the regular season with Carmelo Anthony on the court. If New York can space the floor allowing Grant to get in some PnR looks with new acquisitions Robin Lopez or Derrick Williams, Jerian is looking like he could be very effective for the Knicks.

Monday's match-up with the Lakers bolstered Grant's claim for a starting role. Facing #2 draft pick D'Angelo Russell, Grant admitted afterwards that he felt he had something to prove versus someone drafted before him. Grant outplayed Russell in every way throughout the Knicks 76-66 victory. Russell played a quiet 23 minutes netting as many points (8) as turnovers. Looking to prove himself, Grant put in nearly 29 minutes of running the Knick offense (at least until Cleanthony Early gets a touch). The shooting touch is still working itself out for Jerian, but his 3-8 performance included his first 3FG of the summer on a very good looking stroke. He also sunk all 3 attempts from the FT stripe. Defensively, Grant looked a little shaky defending the ball, but solid in the open floor and helping teammates. He added 4 steals versus the Lakers. Much like he did against UNC twice in his final season for ND, Grant made his mark on the game finding open teammates. His 8 assists could have been much higher if a couple of open jumpers would have dropped or NBA statisticians started tallying hokey assists. Grant's passing and vision are translating to the NBA summer level - a great start for a rookie with designs on a starting role.

For those of you on uni-watch, Grant was wearing the new Curry One low's in the "Panthers" color way. I've been meaning to try out the UA basketball shoes and had a discount at DSG, so I've got a pair of these on order myself. Jerian consistently wore the ClutchFit low's throughout the season with ND. I couldn't find any news of a shoe deal yet, so we'll see if UA keeps Jerian Grant under their banner as he transitions to the NBA.

The part-time pitcher played twice with the Trailblazers this weekend, and Portland split their two games. The Blazers fell to the Celtics 85-76 in their opening game, but recovered for a 13 point victory over Dallas in their second. It was clear Boston had a distinct advantage having played 3 games in Utah prior to arriving in Sin City as they jumped out to a quick 10 point lead that ballooned to 18 at halftime. The Blazers put up a better 3rd quarter, but couldn't get over the hump. Connaughton got the start for the summer Blazers and went 3-5 from deep for 9 points to go with 4 boards, 2 steals and a block. D-League star, Tim Frazier stole the night nearly collecting a triple-double in the 40 minute contest, but reviews on Pat's performance said he looked very much the part of an NBA rotation player with great confidence in his shot and demonstrating good athleticism and bounce.

In the Blazers match-up with the Mavericks, Connaughton played over 23 minutes and scored 11 on 4-10 overall from the floor and 2-5 deep. Pat grabbed another 6 boards in the 93-80 victory over Dallas. Pat is in a much different position than Jerian this summer. Connaughton did ink a deal with Portland prior to opening summer league play, but given his position in the second round, it is unlikely to be a guaranteed contract. Where Jerian is fighting for a starting role, Pat is looking to prove his value as a rotation guy and make the Portland regular-season roster. I wasn't able to watch either game before getting this post live, but everything I've read indicates Pat is looking very athletic and showing no signs of struggling with the deeper NBA three point line. As expected, he's handling the media well... 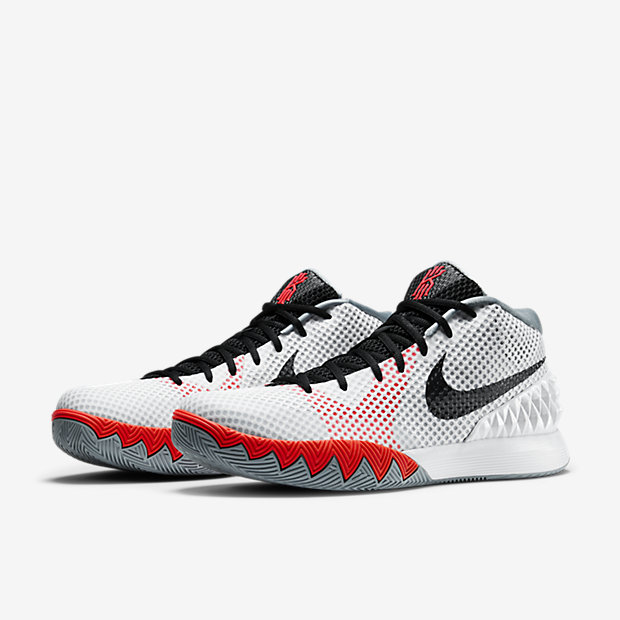 Connaughton seems to have returned to his Nike habits (scroll to the bottom of this story for an anecdote about Pat, Jack Swarbrick, and a pair of red Nikes). In addition to rocking a little more flow, Pat has been wearing Nike's Kyrie 1 in the Blazer-friendly color way. Like 99% of the NBA, it is unlikely Pat is getting any significant scratch for sporting the Nike kicks. I'm sure he's just happy to have the freedom to wear what he wants without The Brick's scrutiny.

We'd be remiss if we didn't mention the other two Irish alumni trying to make their way into the NBA this summer. Jack Cooley's Utah squad won all 3 of their games in their "home" league, but dropped their first contest in Vegas 82-79 to the Heat. Cooley is leading the Jazz with 9.25 rebounds per game so far this summer to go with 9.25 points per game on nearly 60% shooting. Jack is also managing an impressive 4.75 fouls per game in games that are only 40 minutes long.

Luke Harangody's Suns squad split their first two games in Vegas with an opening win over Washington and a loss to Houston. He's currently 2-9 from the floor, including an 0-5 performance in the lost to Houston. Harangody has made 1 of his 4 attempts from behind the three point arc in Vegas. At four points and three rebounds per game, Luke is looking unlikely to crack the Suns roster for the regular season, but there's still time to improve.

You can read up on all the summer league happenings on NBA.com, or for a fan's perspective, check out SBNation's coverage from Posting and Toasting for Jerian, Blazer's Edge for Pat, SLC Dunk for Jack, and Bright Side of the Sun for Luke. The Posting and Toasting crew was extremely pleased to pick up Grant for Hardaway and is somewhat split but optimistic about J's future. The Blazer's Edge community has an interesting fringe that likes to revisit vert-gate from the combine when discussing Pat. Most think he'll be a rotation guy getting a few spot minutes off the Blazer bench. Holding to the white-guy-for-white-guy sports comparison axiom, Pat is being compared to J.J. Reddick by a few of their commenters. The gang at SLC Dunk seem to love Cooley's hyper motor and efficient offensive game. Unfortunately, they also see him as having a really challenging road to making the Jazz roster this season. No mention of Gody over at Bright Side.