Greg Bryant is maturing as a running back

A running back in college needs to be more than a great athlete. Understanding how to read and set up blocks is critical. In high school running backs look to find a "hole" to run through and score. In college running backs must find a "crease" and get positive yards. The 2015 Blue & Gold game provided a nice example of Greg Bryant making this transition. Let's take a look at the film and I'll show you what I mean. 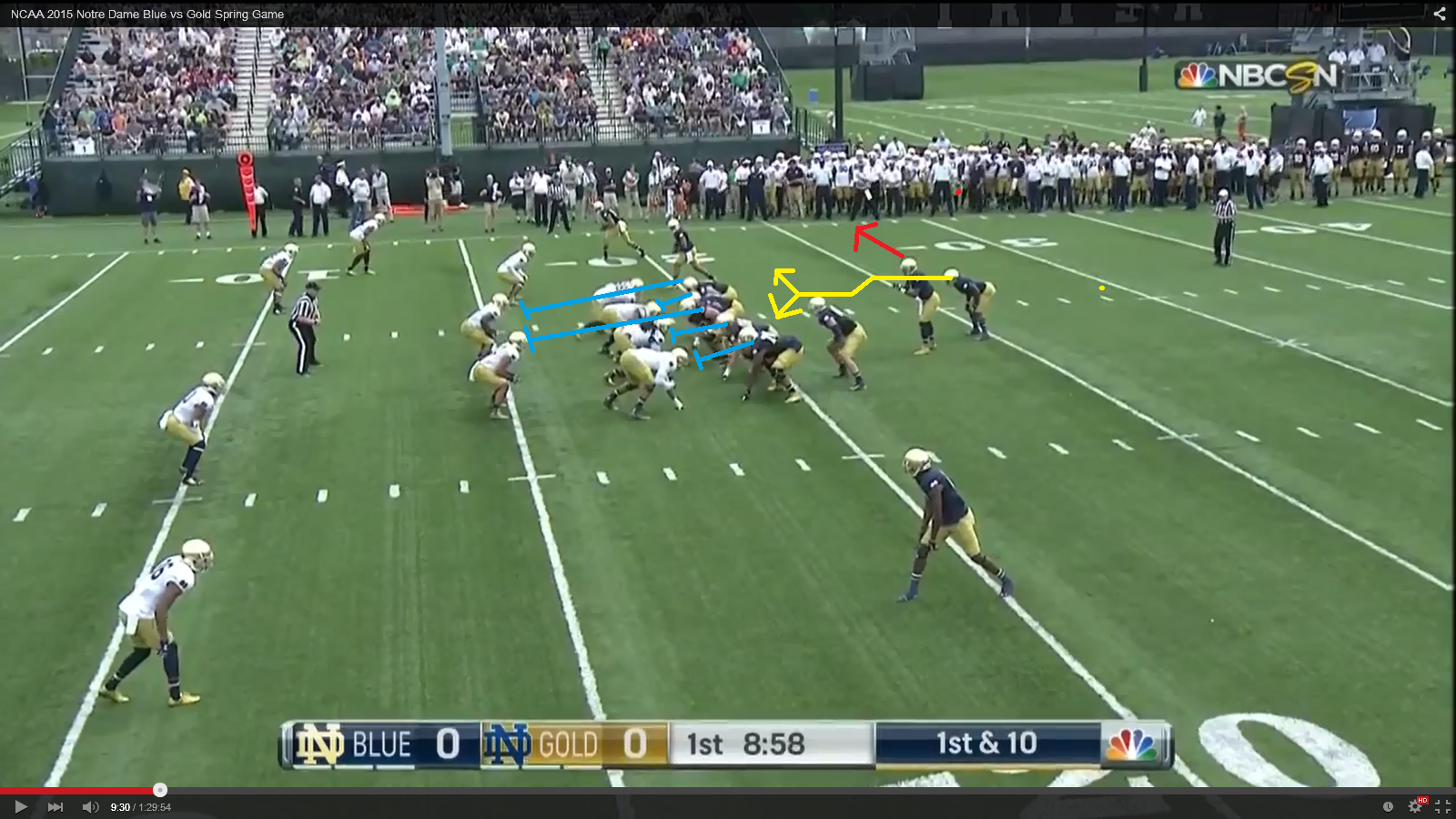 Greg Bryant's (# 1) first carry of the game. The Irish will run a zone read with Everett Golson (# 5) carrying out the fake (red line). Bryant will get the ball and follow the yellow line. As he gets close to the line of scrimmage he will have to decide which way he will go (yellow arrows). 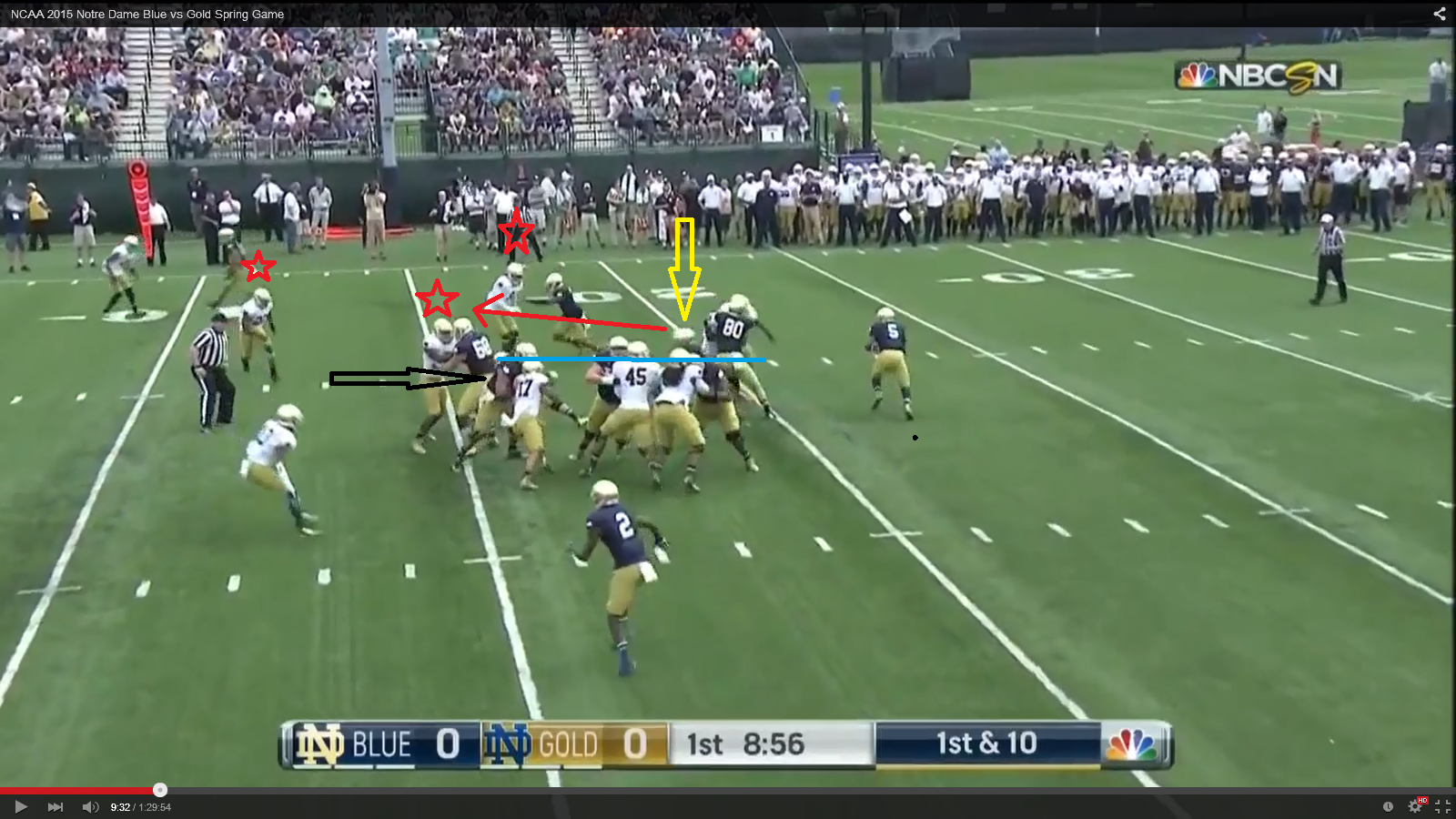 Shortly after the snap, Bryant (yellow arrow) has to make a critical decision. On his left, the offensive line has created a nice seal (blue line). On his right, a choice.

Like a siren song, young running backs have a difficult time resisting the lure of the red arrow. They see open space, green grass (well fake green grass) and a touchdown waiting to happen. Like the mesmerizing song of the siren, this open space is a deceiver. Destined to bring doom to all who succumb to its charm.

Okay, well maybe that's a bit of hyperbole, but if Bryant follows the red line, he'll have three players (red stars) in great position to make a tackle. It may seem counter intuitive, but the better choice is to exploit the small crease between two blockers (black arrow). 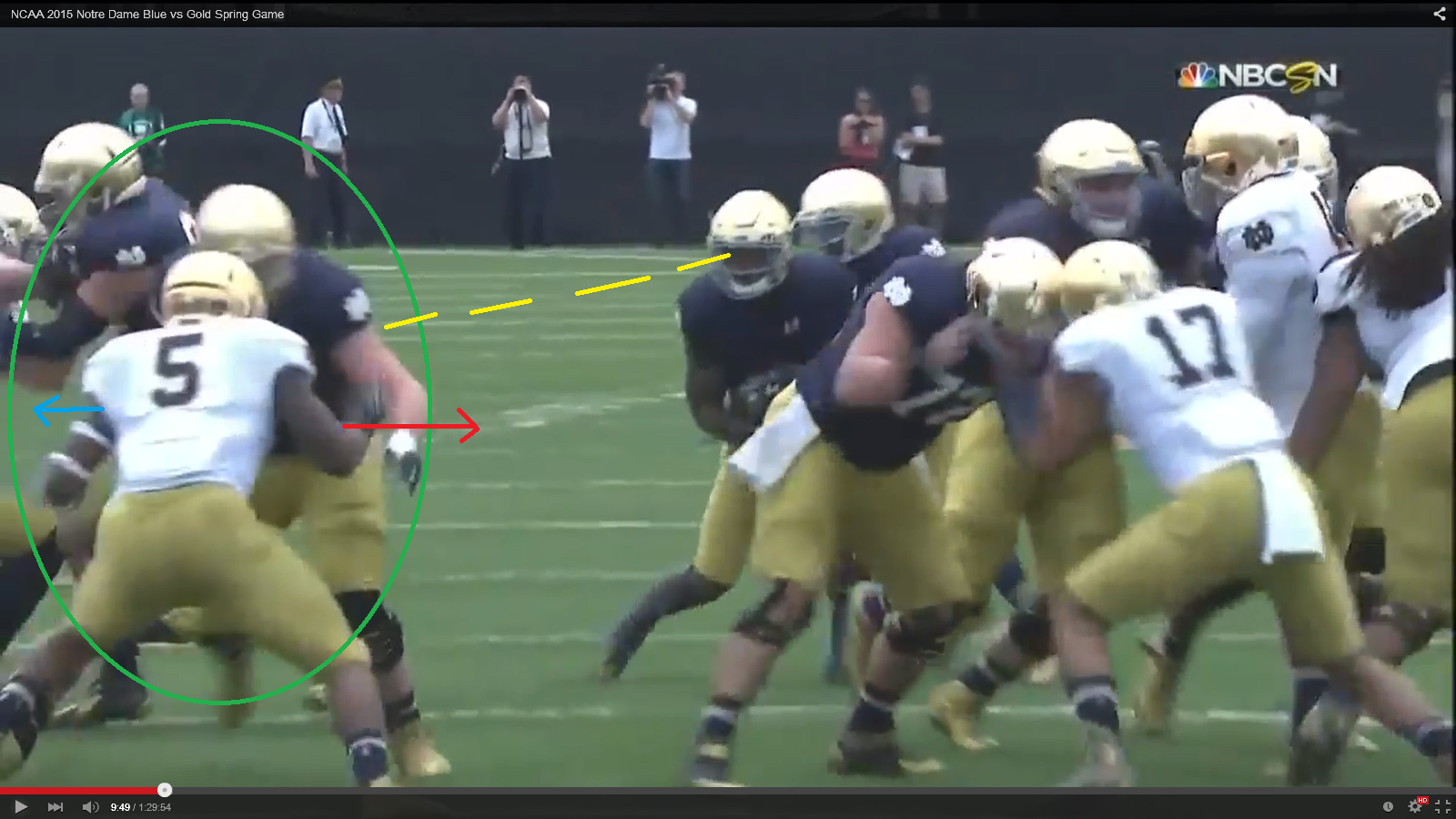 Bryant has eyes (yellow dotted lines) on the block of Mike McGlinchey (# 68, green circle). At this point, Nyles Morgan (# 5) is in a head up position and therefore a threat to make a tackle in either direction (red arrow, blue arrow). 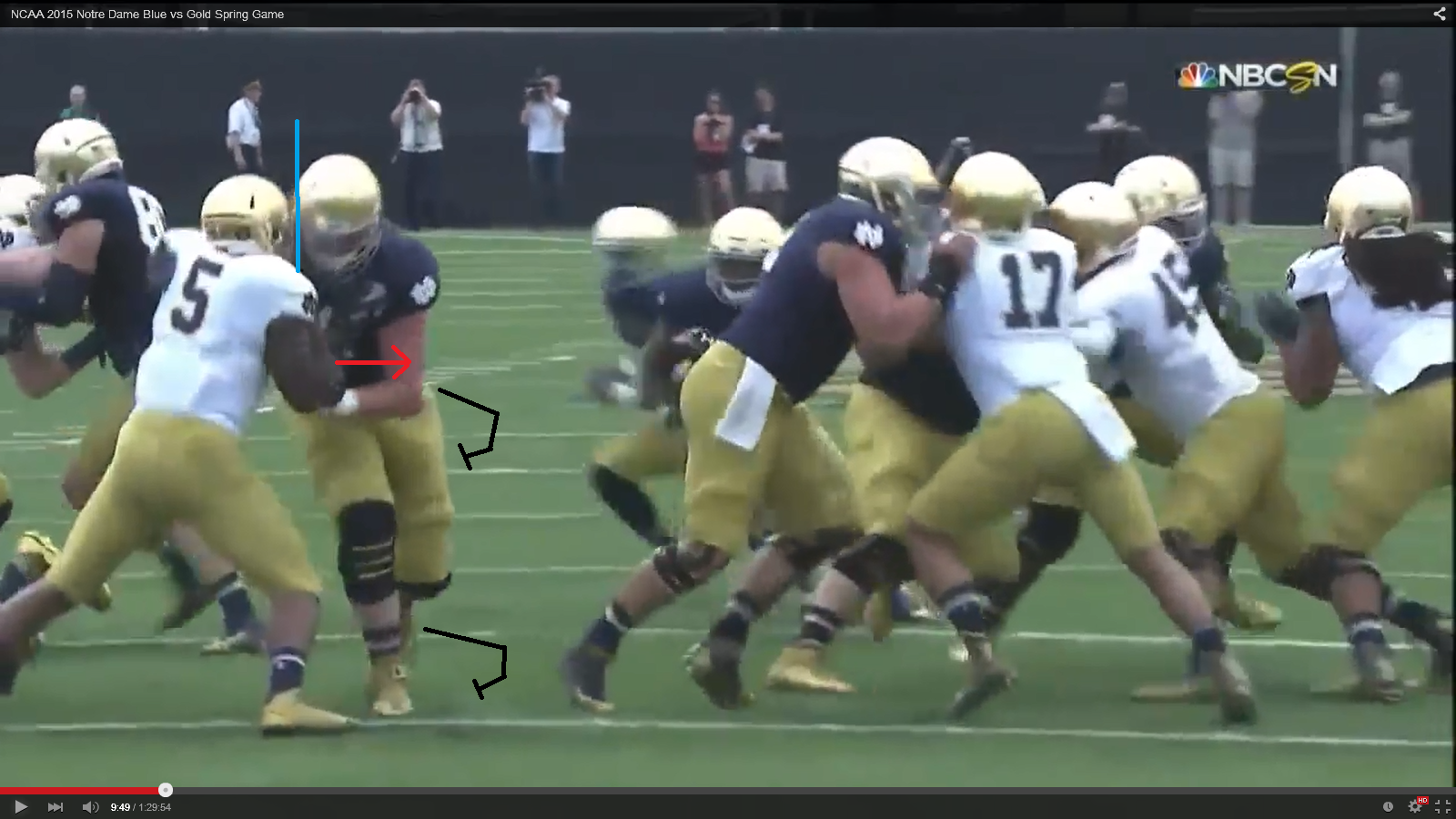 McGlinchey has his head in good position (blue line), but needs to get his hips and his feet around so he can finish the block and seal the linebacker (black line). Because McGlinchey isn't in a dominant position yet, if Bryant isn't patient and makes his move too soon, Morgan stands a good chance of defeating the block (red arrow). 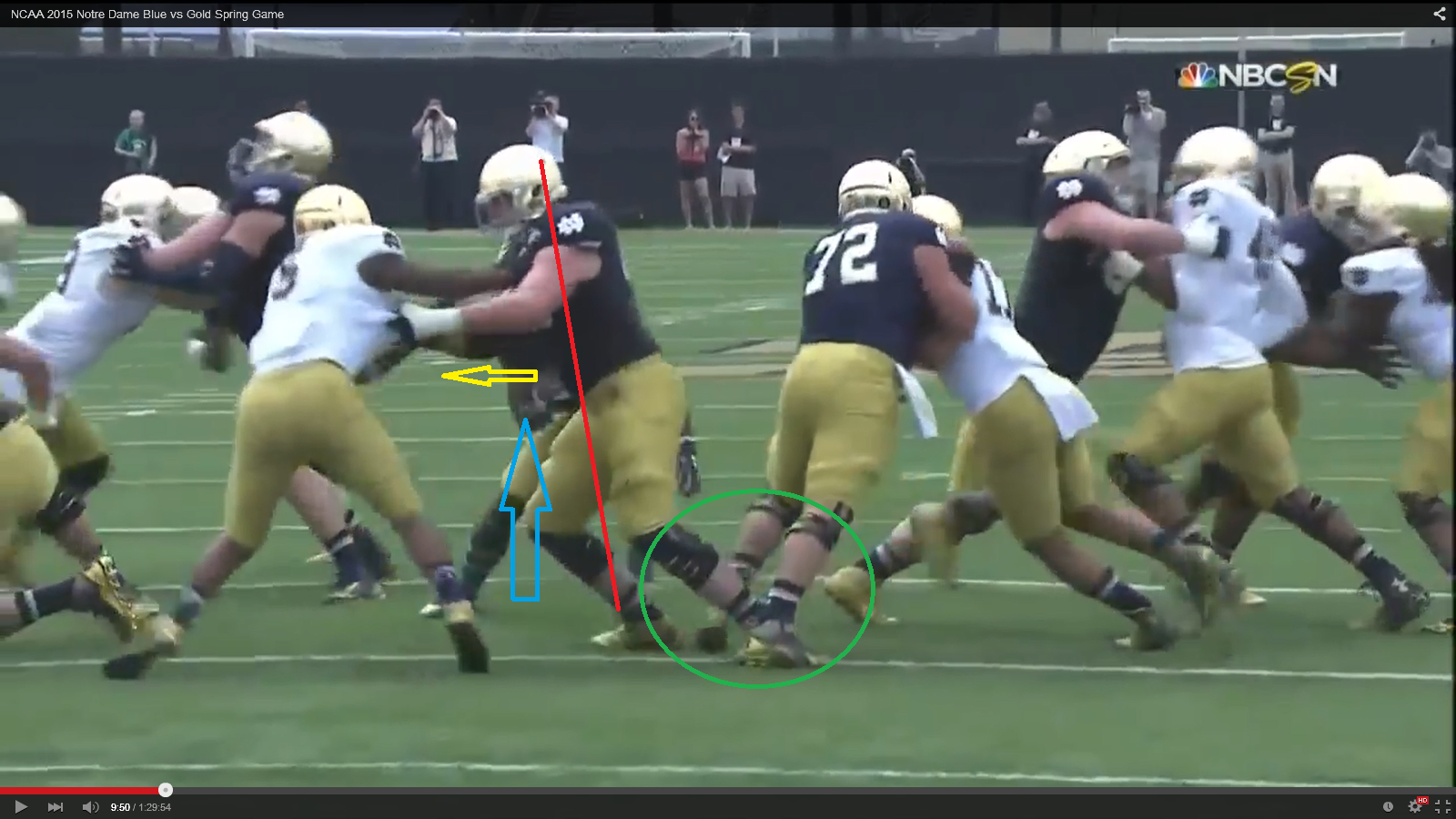 McGlinchey is now in excellent position (red line). But he doesn't deserve all the credit for this positioning. Greg Bryant (blue arrow) set this block up. It's hard to see in this screen shot, but Bryant made a subtle move in the direction of the yellow arrow. This forced Nyles Morgan to slow down, which allowed McGlinchey to gain the advantage.

This subtle move may not seem like a big deal, but it represents an important milestone in Greg Bryant's development. Young running backs rarely have the patience or vision to set a block up like this. This is a sign that Bryant is maturing as a running back. It's like watching a caterpillar turn into a butterfly. On second thought, maybe that's a little too dainty for a football analogy. Imagine the caterpillar is really big and the butterfly is actually Mothra. Better?

Of course, now Bryant is going to have to find a way to fit through a pretty small crease and avoid numerous trip hazards (yellow circle). 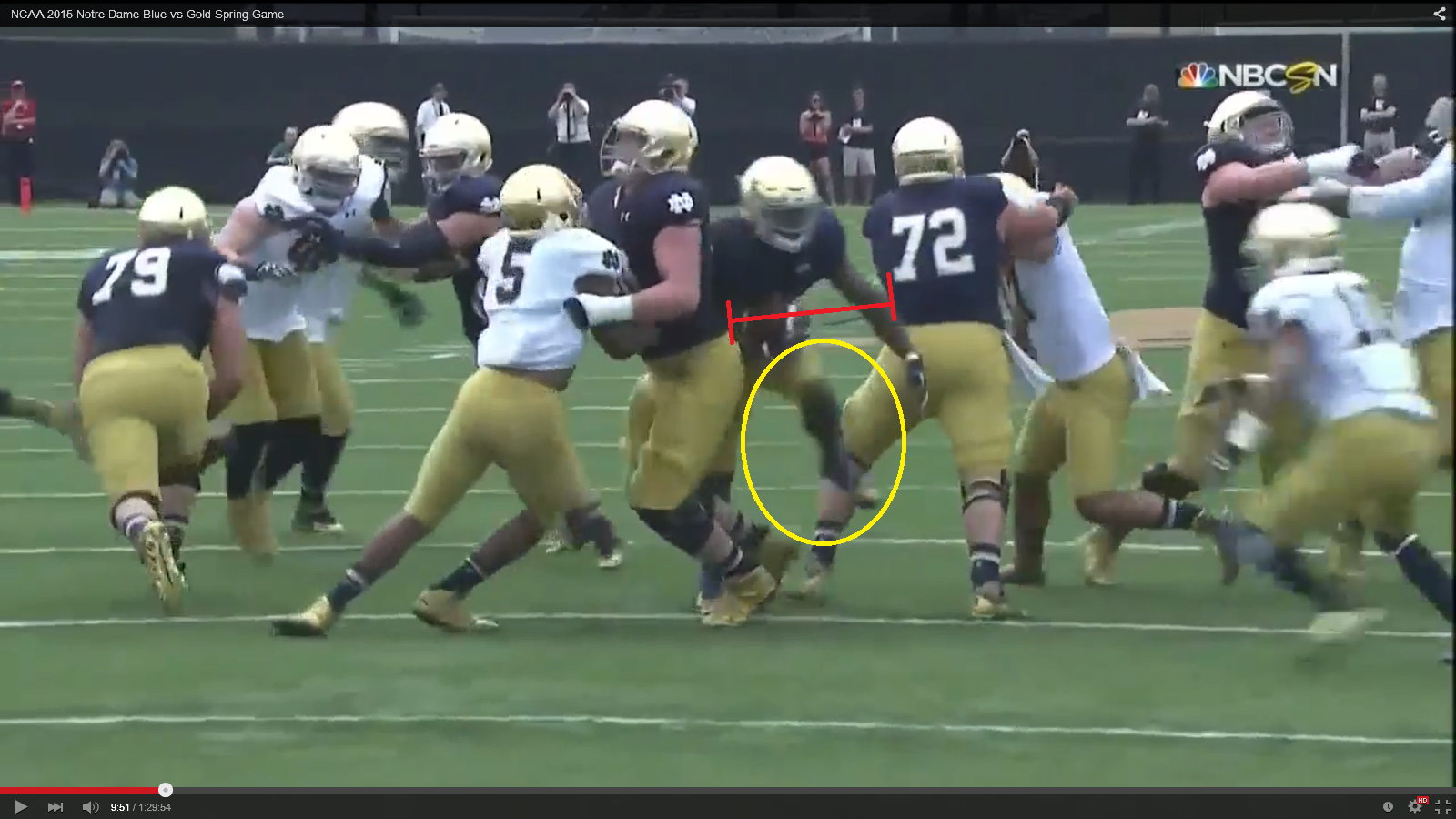 That's a pretty small gap to squeeze through (red line). Bryant does a great job of finding his way through and getting his knees up to avoid the tangle of feet (yellow circle). 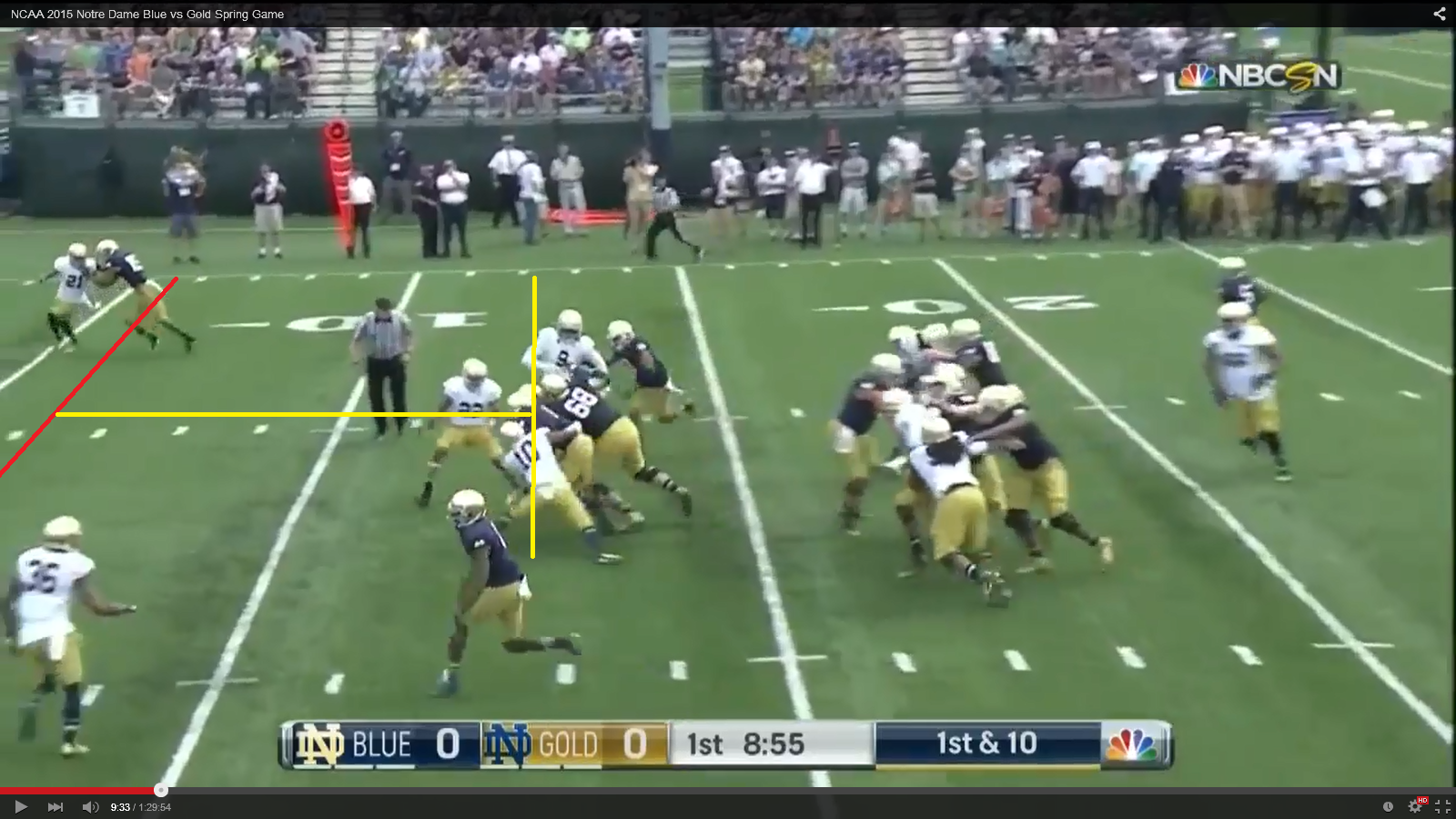 Once through the line, Bryant knows contact is coming from safety Max Redfield (# 10). No problem. Put your pads down, drive your legs.

First contact is made at the yellow line. The play ends at the red line. A little over 6 yards. Uh yeah, I would say that qualifies as putting your pads down and driving your legs.

When you watch the video, pay close attention to the way Bryant patiently sets up his blocks and then explodes at the critical moment

Patience . Setting up blocks. Finding the crease in the defense. Exploding. Greg Bryant showed all of this on one play. If he can play like this consistently in 2015.... look out.