It's more than just being smart.

Share All sharing options for: OFD Films: What makes Joe Schmidt so good?

If you follow Notre Dame football, you've heard the story ad nauseam. Joe Schmidt, the diminutive walk-on who became MVP. Although it has become somewhat of a cliché, Schmidt's story really is the stuff of legend. So how did the lightly recruited linebacker from California overcome seemingly insurmountable odds to become the most important cog in the Irish defense? The prevailing wisdom suggests that the secret to Joe Schmidt's success is a football IQ that's off the charts.

In reality, that's only a partial explanation. Schmidt is an intelligent player and has a tremendous understanding of Notre Dame's defense. However, there are many bright guys out there who understand football. Football IQ alone doesn't make an MVP caliber linebacker at Notre Dame. It might make someone a coach or perhaps a semi-interesting Canadian blogger, but not a highly productive middle linebacker at one of the most storied programs in all of college football. What separates Schmidt is not his intellect alone. It is his combination of football acumen and athleticism. Yes you read that correctly. Joe Schmidt is a really good athlete. This athletic ability manifests itself in an unmatched proclivity to make plays on any part of the field regardless of where he lines up. Let's take a look at the film and I'll show you what I mean. 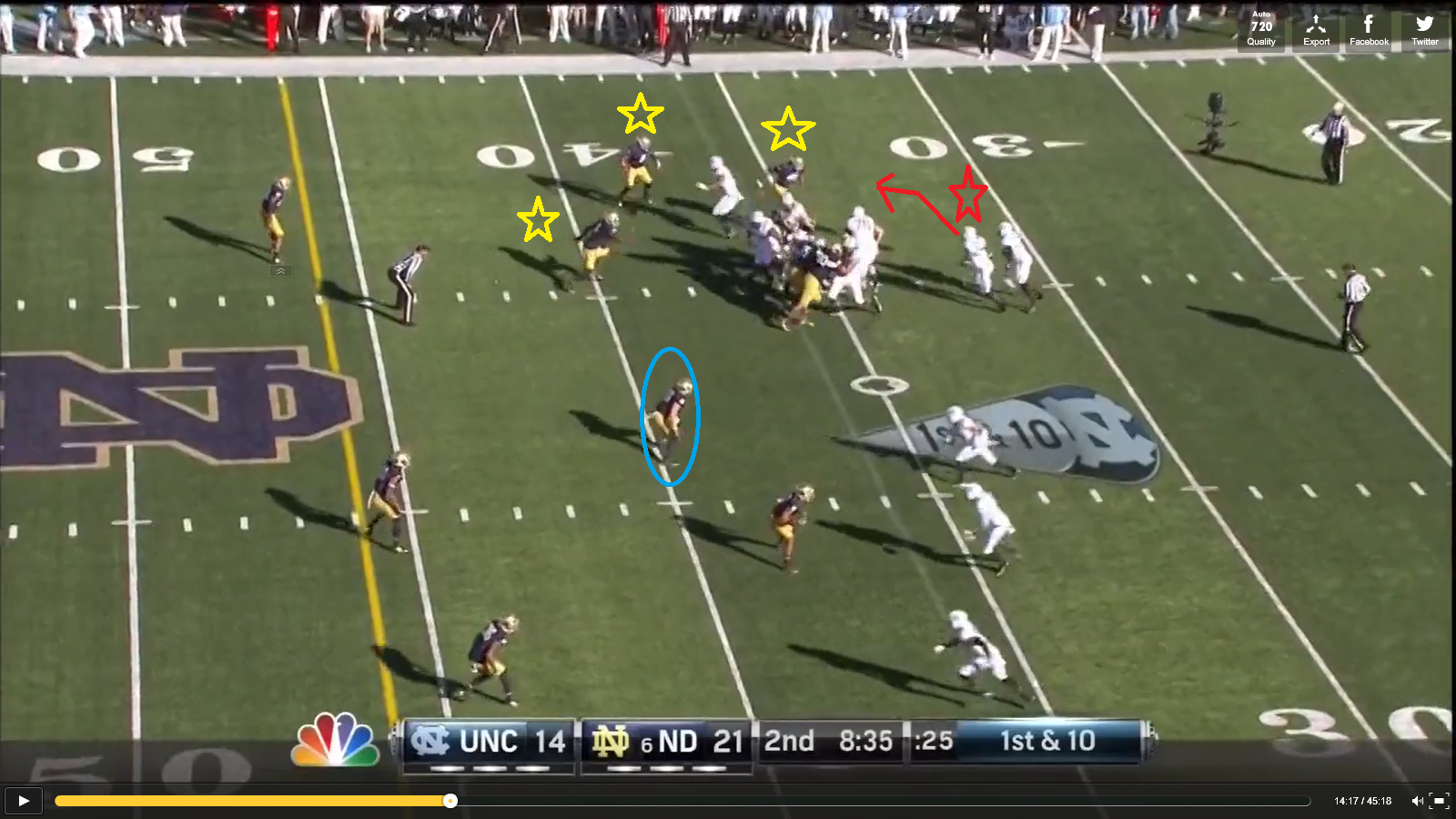 North Carolina is going to run the ball on this 1st down play. Because of the formation Joe Schmidt (# 38, blue circle) is a long way from the ball carrier (red star). Other than defensive linemen, Notre Dame has 3 players (yellow stars) who (based on proximity) should be able to make the play long before Schmidt arrives. 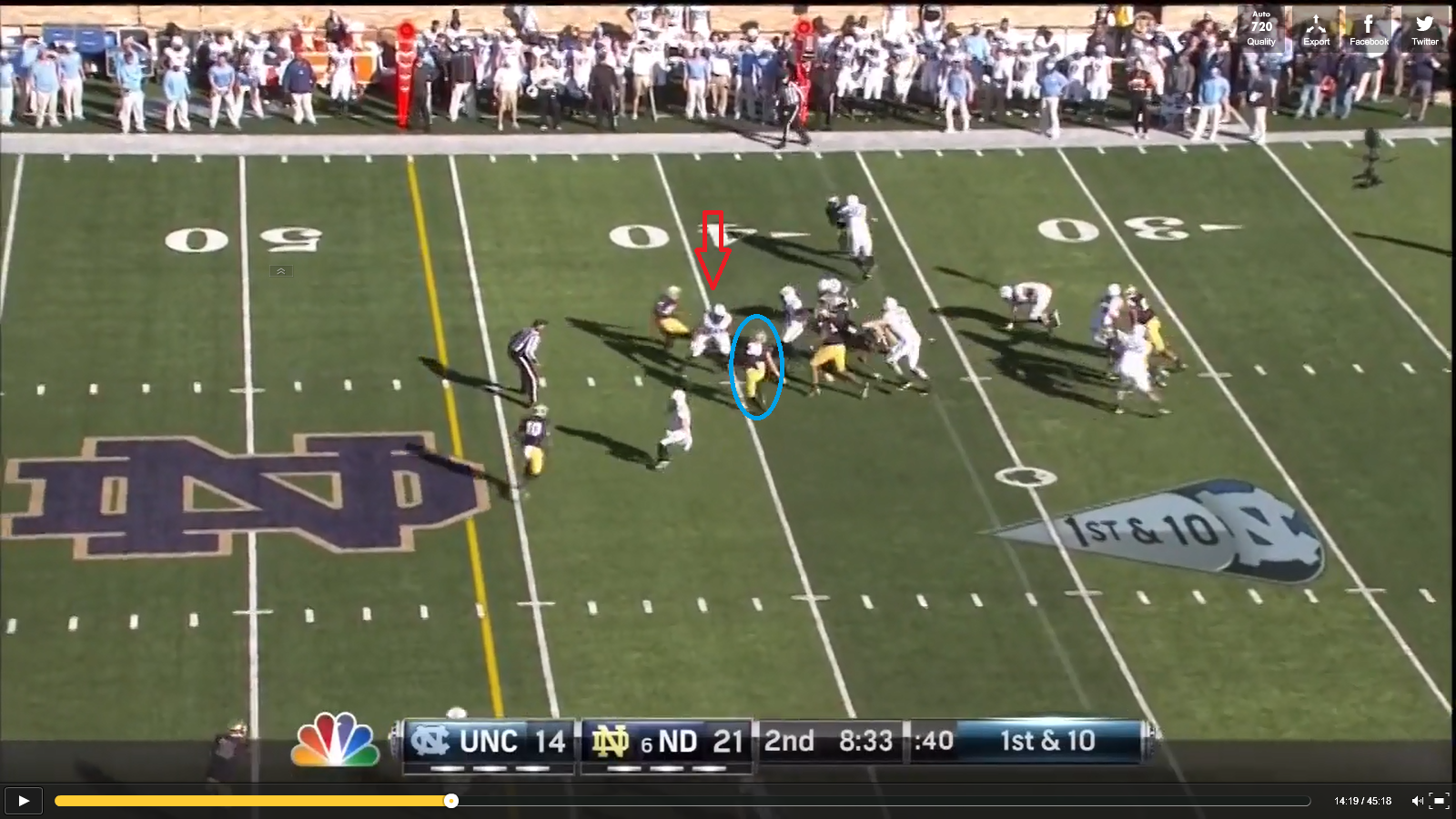 Surprisingly, Schmidt has come all the way across the formation (blue circle) and has a shot to make the tackle. Unfortunately, he's up against an offensive lineman who is in perfect position (red arrow) to make the block. 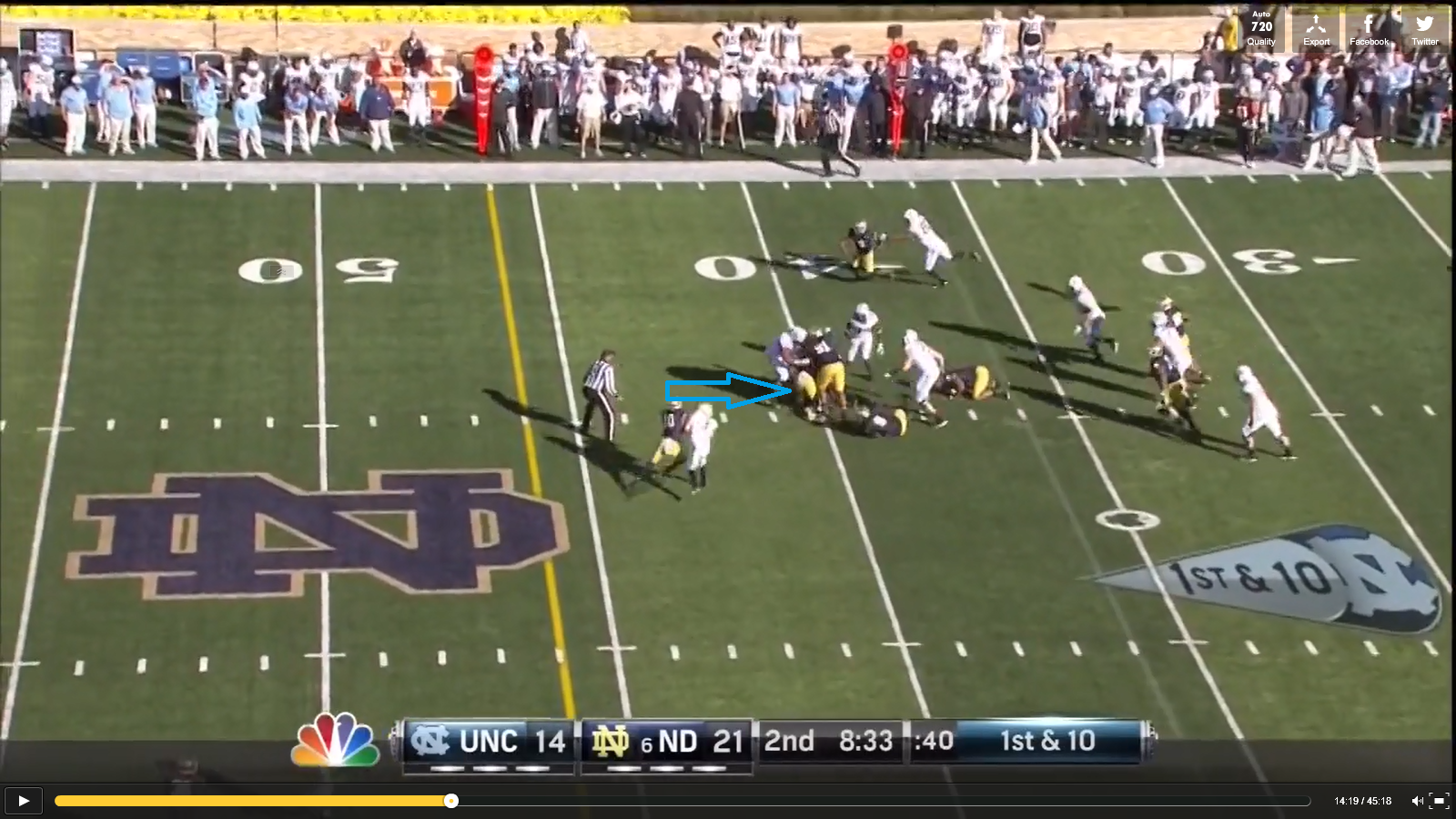 Somehow Joe Schmidt gets in on the tackle (blue arrow).  This play highlights his incredible range. It required very good acceleration and speed to get into position and impressive skill to defeat a block where the lineman had the perfect angle. Not many players could make this play. In fact, three players who started a lot closer to the ball carrier (identified in the first screen shot with yellow stars) couldn't beat Schmidt to the tackle. You don't make a play like this just because you're smart or because you hustle. You have to be a very good athlete to cover this much territory in D1 football. 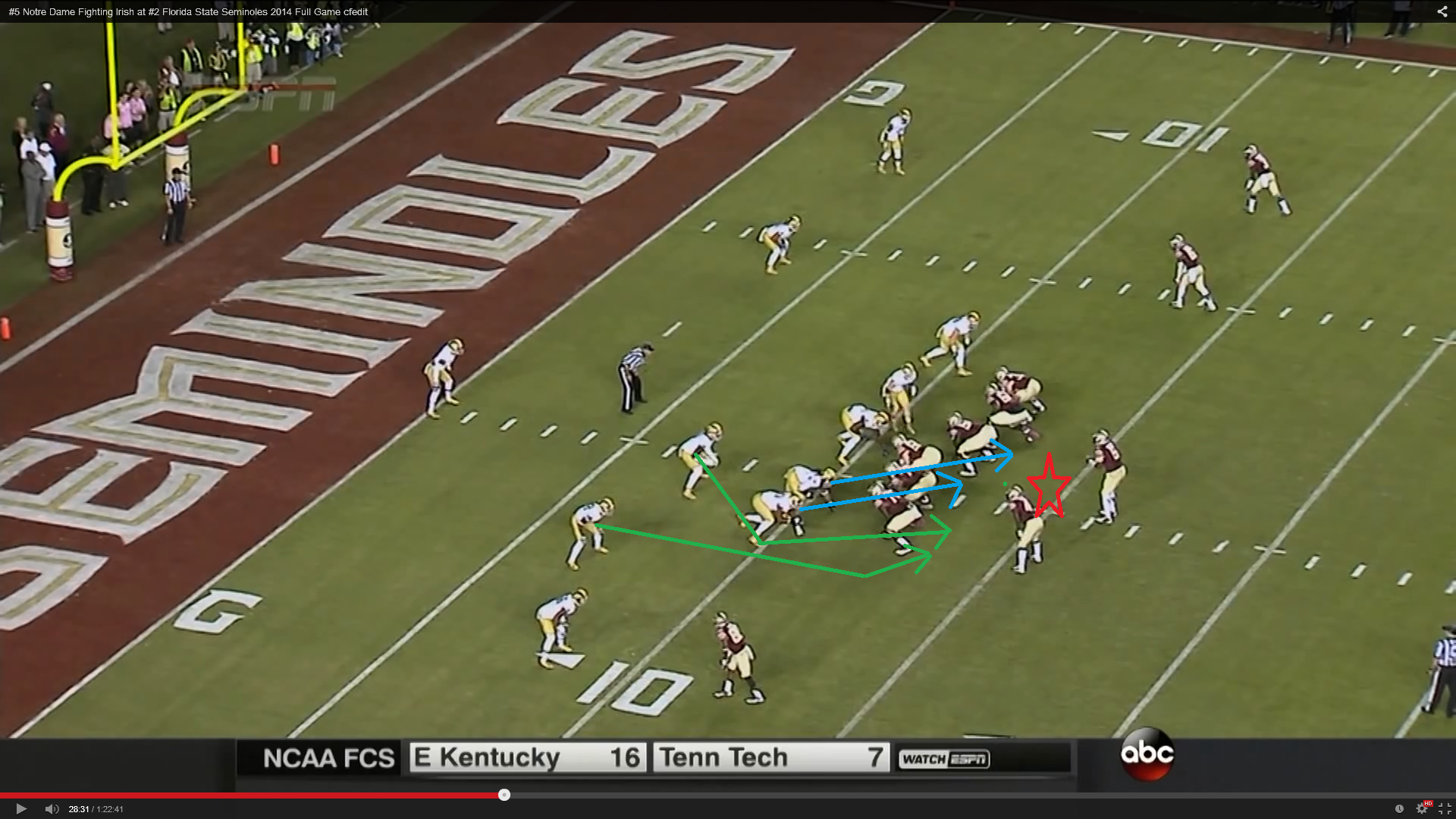 Here we see a classic overload blitz from Brian VanGorder. He will slant the defensive linemen (blue lines) and blitz the safety and linebacker to the outside (green lines). This puts the running back in the unenviable position of having to block two blitzers coming off the edge. Of course it also means that if the running back releases for a pass (and the offensive line can slide and provide some extra time), there is no one to cover the back. 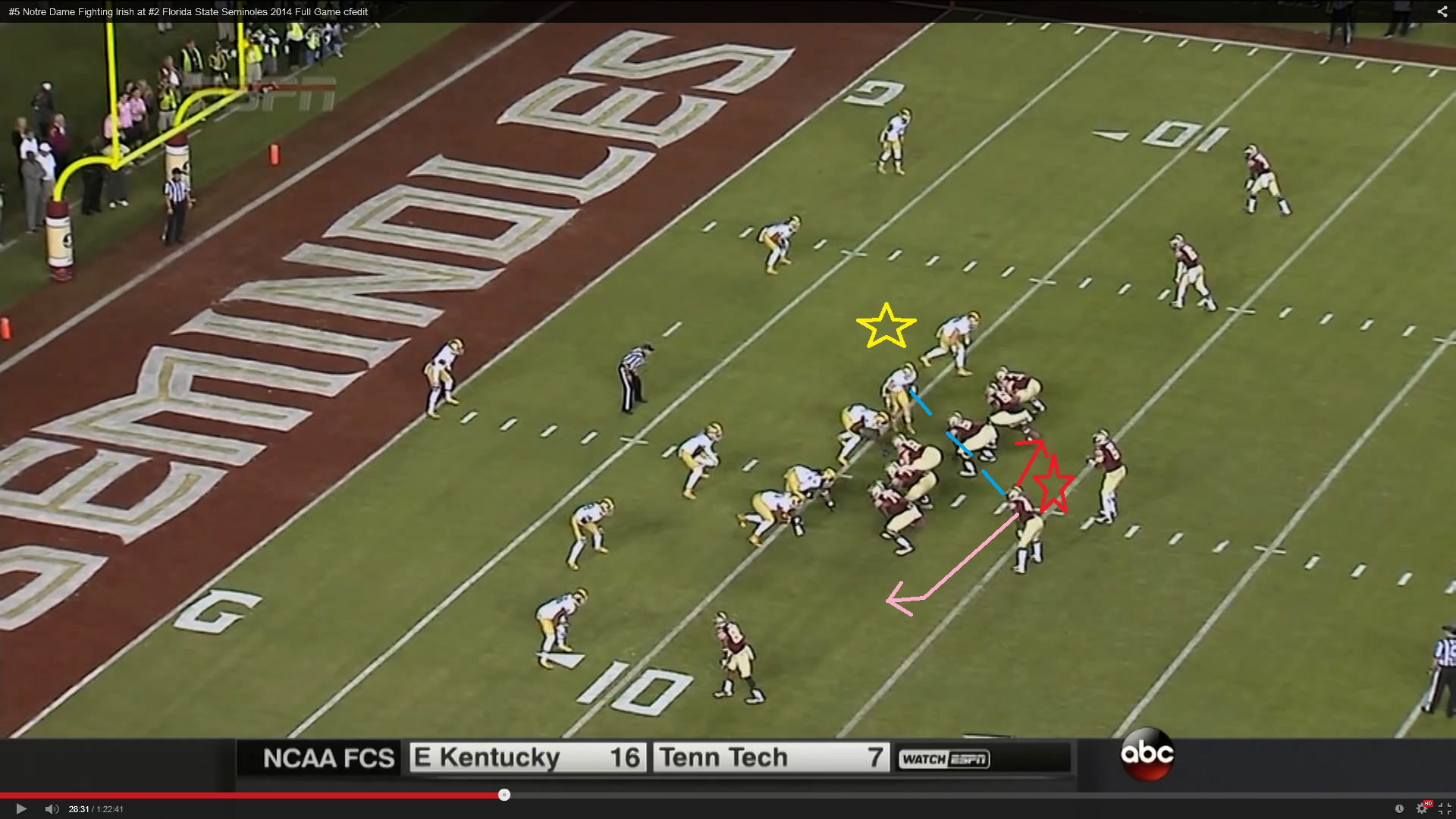 On this call Schmidt (yellow star) is responsible for the running back (red star).  If it's a run (red arrow) Schmidt needs to defeat a block and make a play. If the back releases for a pass (pink arrow) Schmidt will need to cover him.

Pre-snap, Schmidt is in terrible position to defend either of those options. If it's run at him, he is going to have to engage a much larger lineman and if the play bounces to the outside he risks getting caught up in traffic. If it's pass, he will need to get off the line of scrimmage, get depth and come all the way across the formation to cover a running back that already has a head start. This begs the question, why would Brian VanGorder put Schmidt in such a bad position?

Two reasons. First, it helps with the design of the blitz. The offensive line is less likely to slide left and counteract the blitz off the edge because they have to stay home in case Schmidt blitzes. Second, the coaching staff trusts Joe Schmidt. Even though they know he is in a bad position, they have faith he will make a play. Schmidt's ability to cover a large portion of the field allows VanGorder to take risks elsewhere. 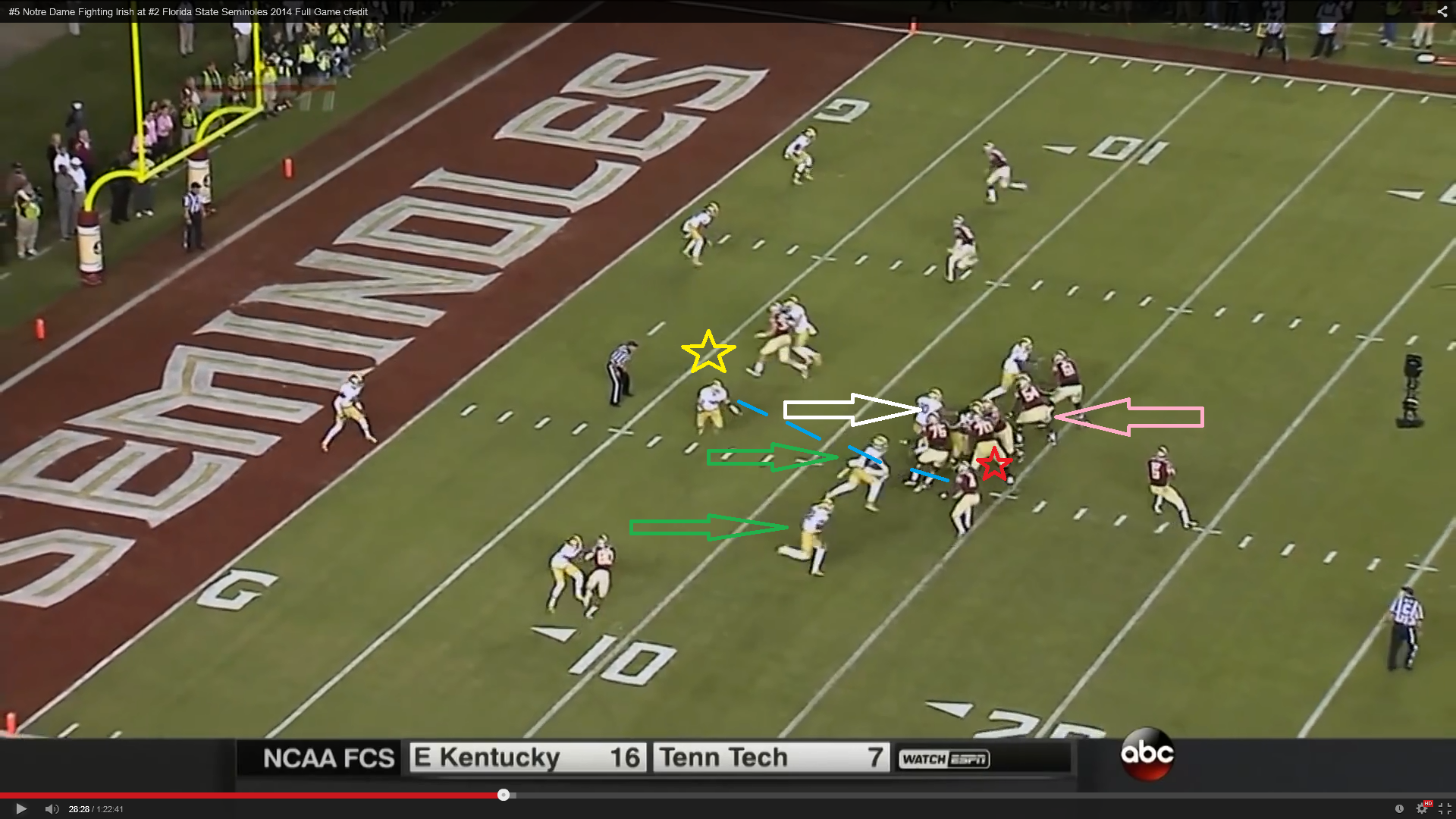 A fraction of a second after the snap. The blitzers are free to attack (green arrows). Schmidt (yellow star) has come across the formation and is now in excellent position to cover the running back if he releases.

See how the line didn't slide towards the blitz (white arrow) and the linemen that Schmidt was standing over is blocking no one (pink arrow). Part of the reason for this is Schmidt's pre-snap alignment (admittedly it's not the only reason but it was a factor).

Notre Dame is playing the undefeated, defending national champions. Yet Brian VanGorder puts Joe Schmidt in a lousy pre-snap alignment and gives him an incredibly difficult task coming across the formation to cover the running back. Do you think he would do this if he didn't have tremendous faith in not only Schmidt's smarts, but his athleticism? As a defensive coordinator, you only consider this type of play design if you have a good athlete at the middle linebacker position. 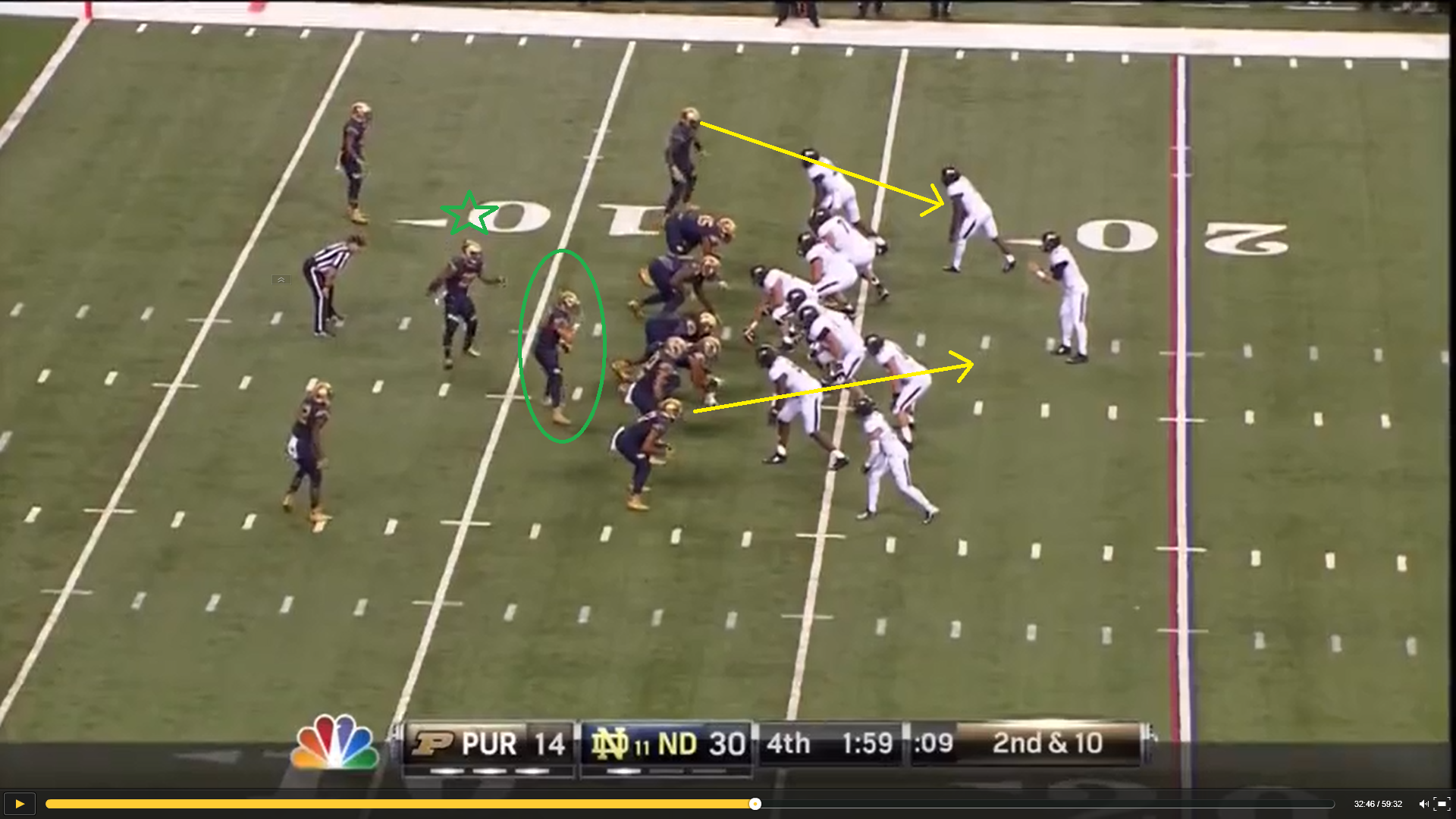 Late in the game, Purdue is marching. The Irish need a big play to put the final nail in the coffin. Purdue comes out in empty and Notre Dame is going to bring pressure off the edge (yellow arrows) and play man coverage. Initially, Joe Schmidt lines up to the three receiver side (green circle) and will be responsible for covering one of the receivers.

Safety Elijah Shumate (# 22, green star) seems confused and is in no man's land. At the last second he decides to come to the three receiver side and play man coverage. 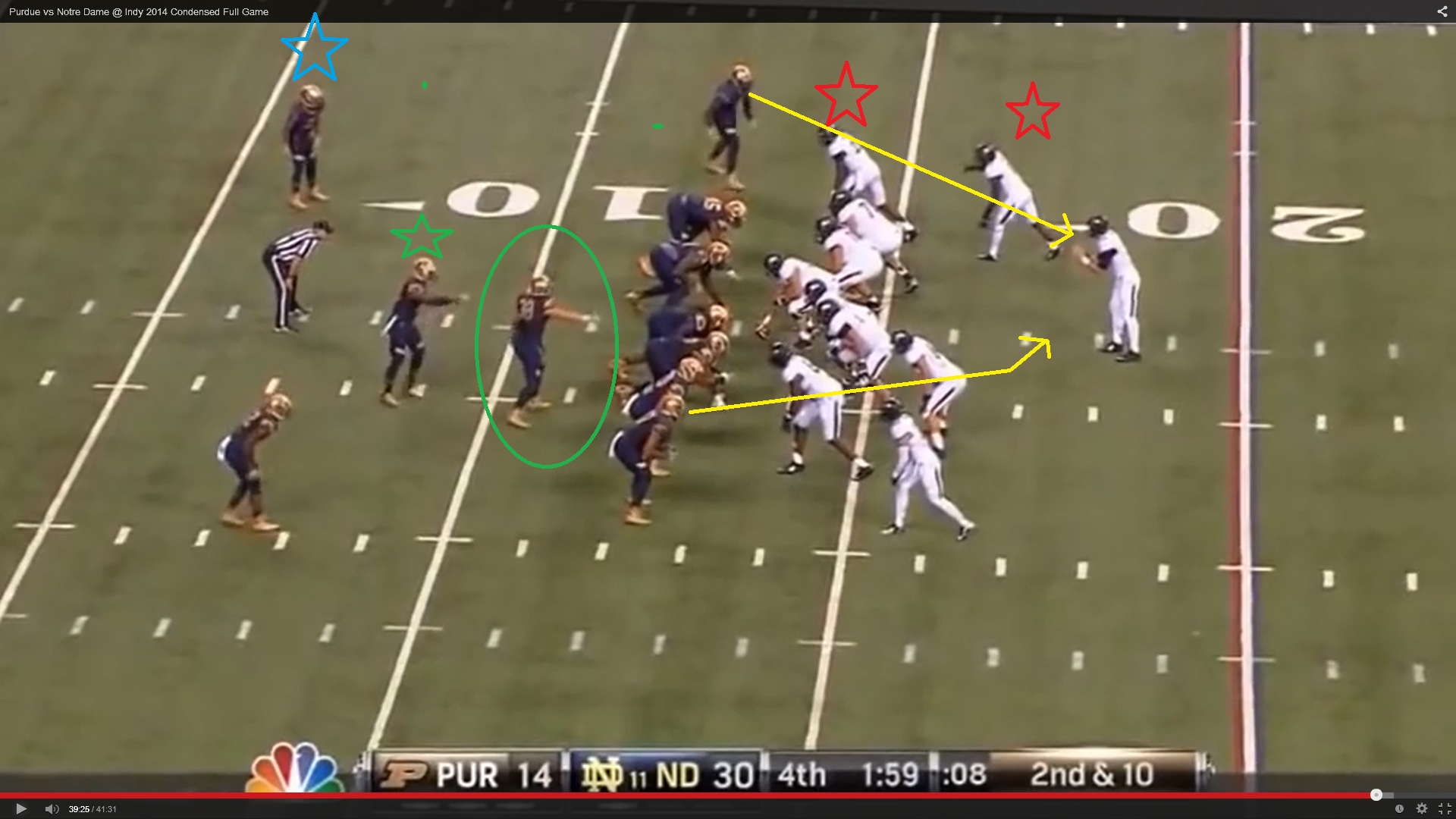 Joe Schmidt (green circle) instantly recognizes there is a problem. Because the safety has moved over to the trips side and Jaylon Smith # 9) is blitzing, the Irish only have one defender (Cody Riggs #2, blue star) to cover two receivers.

The reality is Joe Schmidt should not be the first one to recognize the problem. The onus is on the safety moving over (green star) late to alert Schmidt his responsibility has been switched. After all the switch happened behind Schmidt, he doesn't have eyes in the back of his head. Even if Schmidt did have eyes in the back of his head, he wouldn't be able to see through his helmet, unless he had eye holes cut into it, which might impact the integrity of the helmet, which could lead to... sorry I digress. At the same time, if the safety doesn't alert the Schmidt, Jaylon Smith and Cody Riggs should recognize there is a problem because the issue originates on their side of the formation. 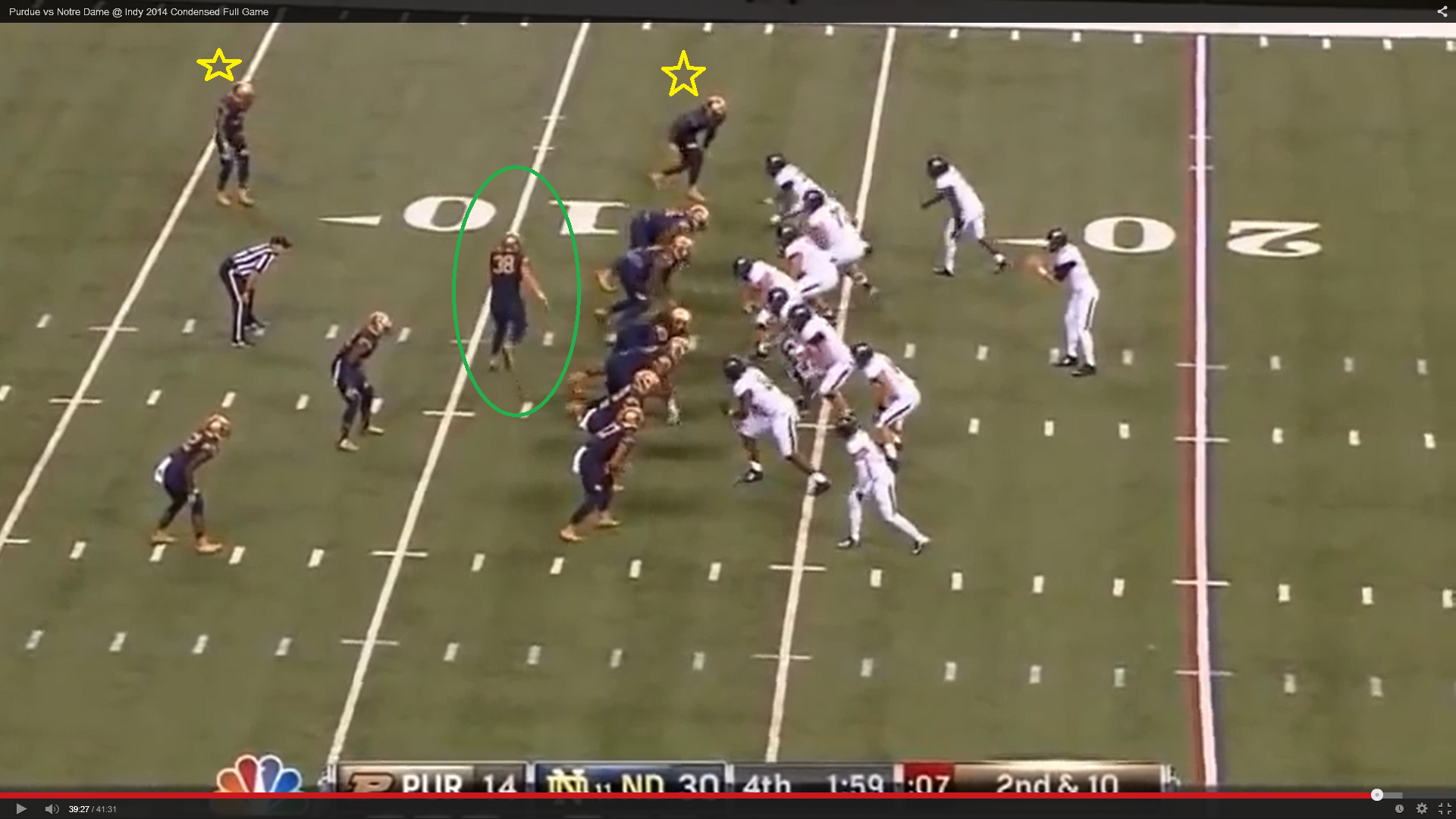 Smith and Riggs seem oblivious to the problem (yellow star). But Schmidt knows what to do and comes across the formation to help out. 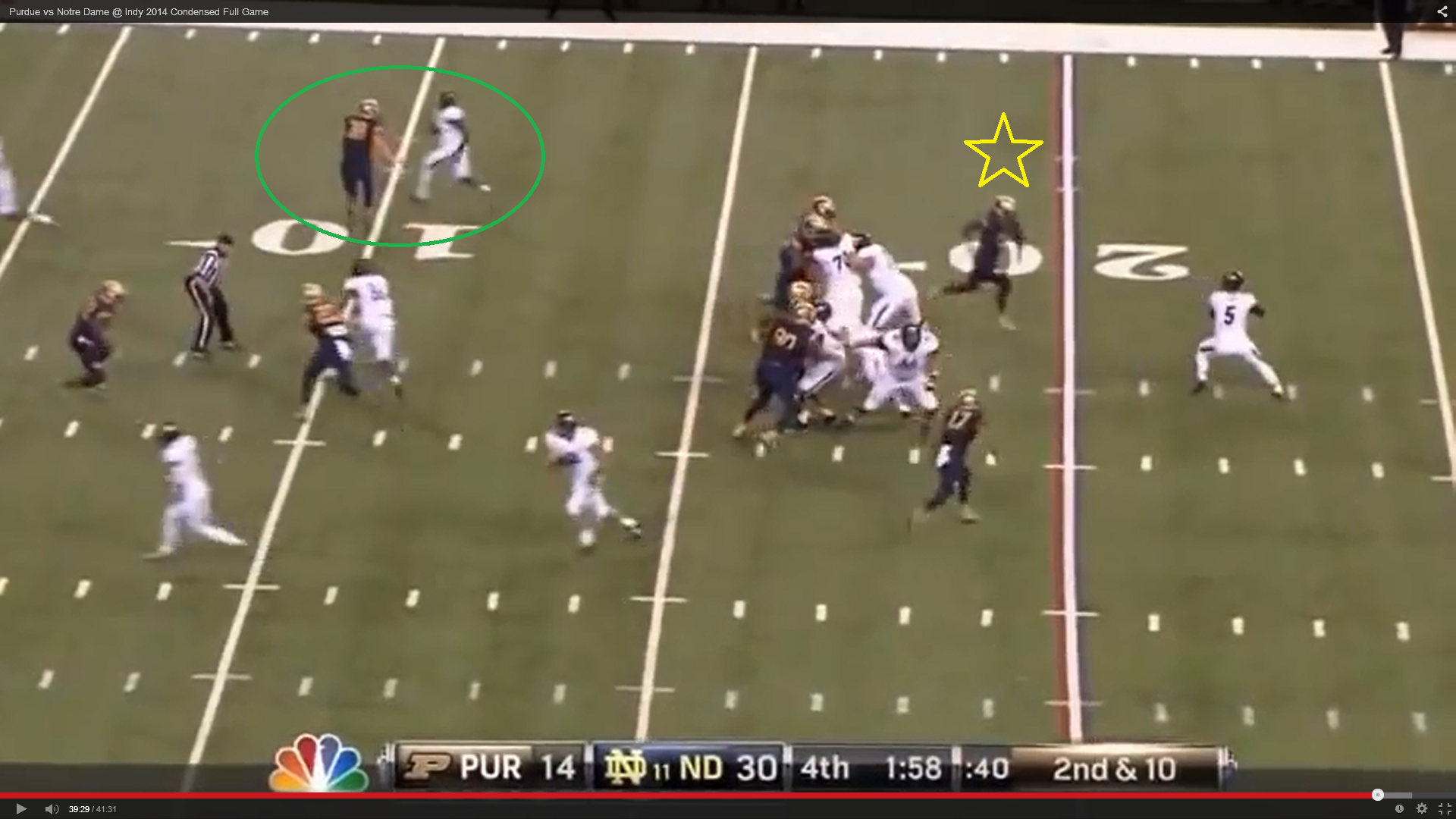 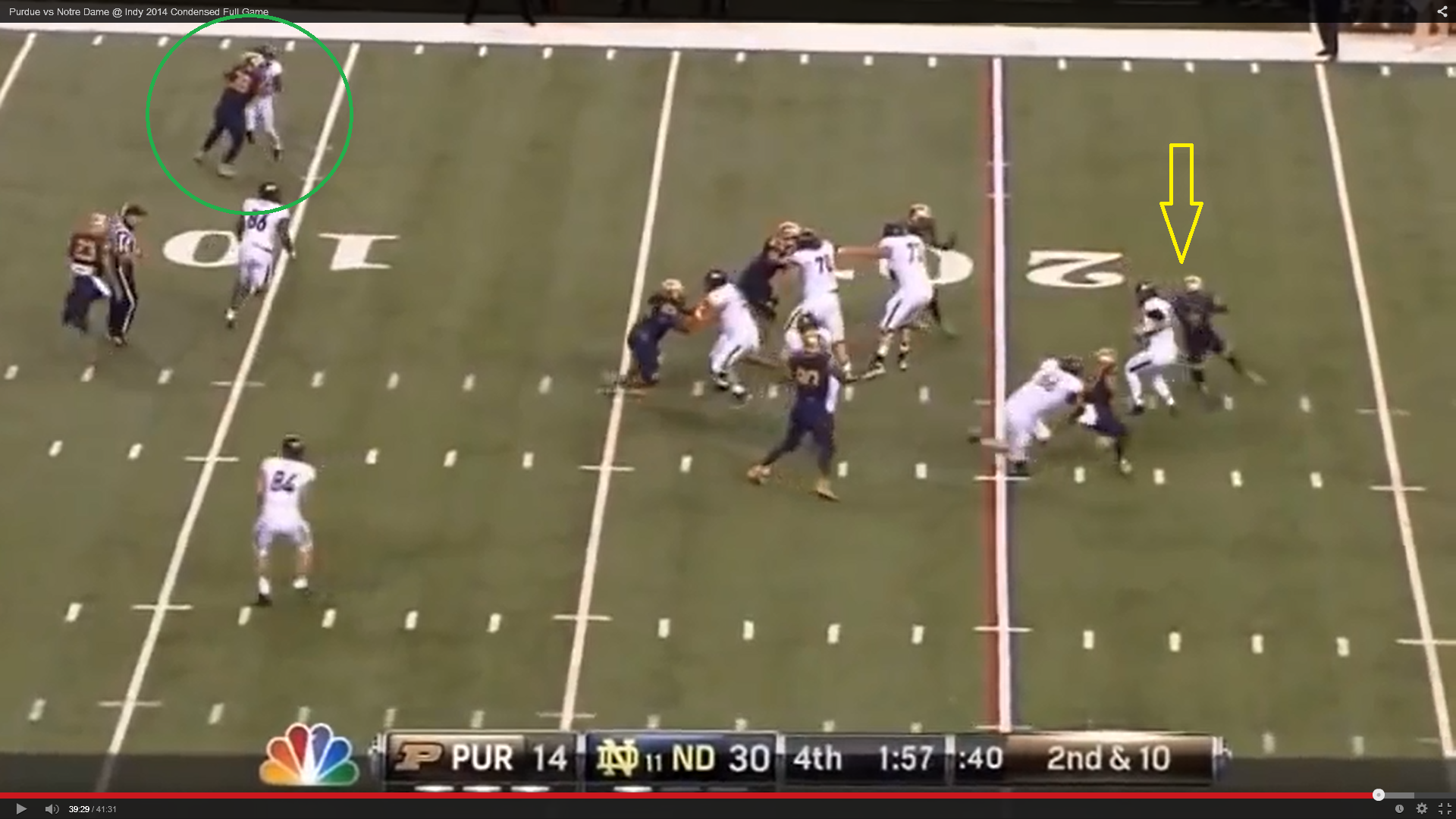 Once again Schmidt has come all the way across the formation to cover a player on the opposite side. This is particularly important, because if Schmidt doesn't cover the receiver, it's a pretty easy throw by the quarterback and this becomes a big play for the Boilermakers instead of sack for Smith (yellow arrow).

This is the type of play that most people wouldn't notice. The stat sheet says Jaylon Smith made a big play and Schmidt did nothing worth noting. The film tells a different story. It appears that Joe Schmidt was the only one who realized the Irish were in trouble. He understood not only his role in the defense, but also the responsibilities of Jaylon Smith and Elijah Shumate. Since Smith was blitzing, he wasn't available for coverage and because Shumate had shifted to the trips side at the last second, there was an uncovered receiver on the opposite side of the formation. It's pretty amazing that Schmidt could figure all that out as quickly as he did and get over there in time to prevent a big play.

The middle linebacker in Brian VanGorder's defense has to be a +1 player. He needs to be able to take care of his primary responsibility, but also have the range and intelligence to cover the responsibilities of other players. Joe Schmidt was exceptional in this capacity in 2014. He was the glue that held the Notre Dame defense together and when he was lost to injury, the defense fell apart. We wish you all the best in your recovery Joe. We're going to need you at full speed next year.