It's safe to say that DeShone Kizer exceeded expectations in 2015. To the surprise of almost everyone, the onetime 3rd stringer ended up being a key cog in a highly effective Notre Dame offense.

In this edition of Iso Cam, we'll take a look at a critical, yet vastly underrated aspect of DeShone Kizer's game... pocket presence. Let's take a look at the film and I'll show you what I mean. 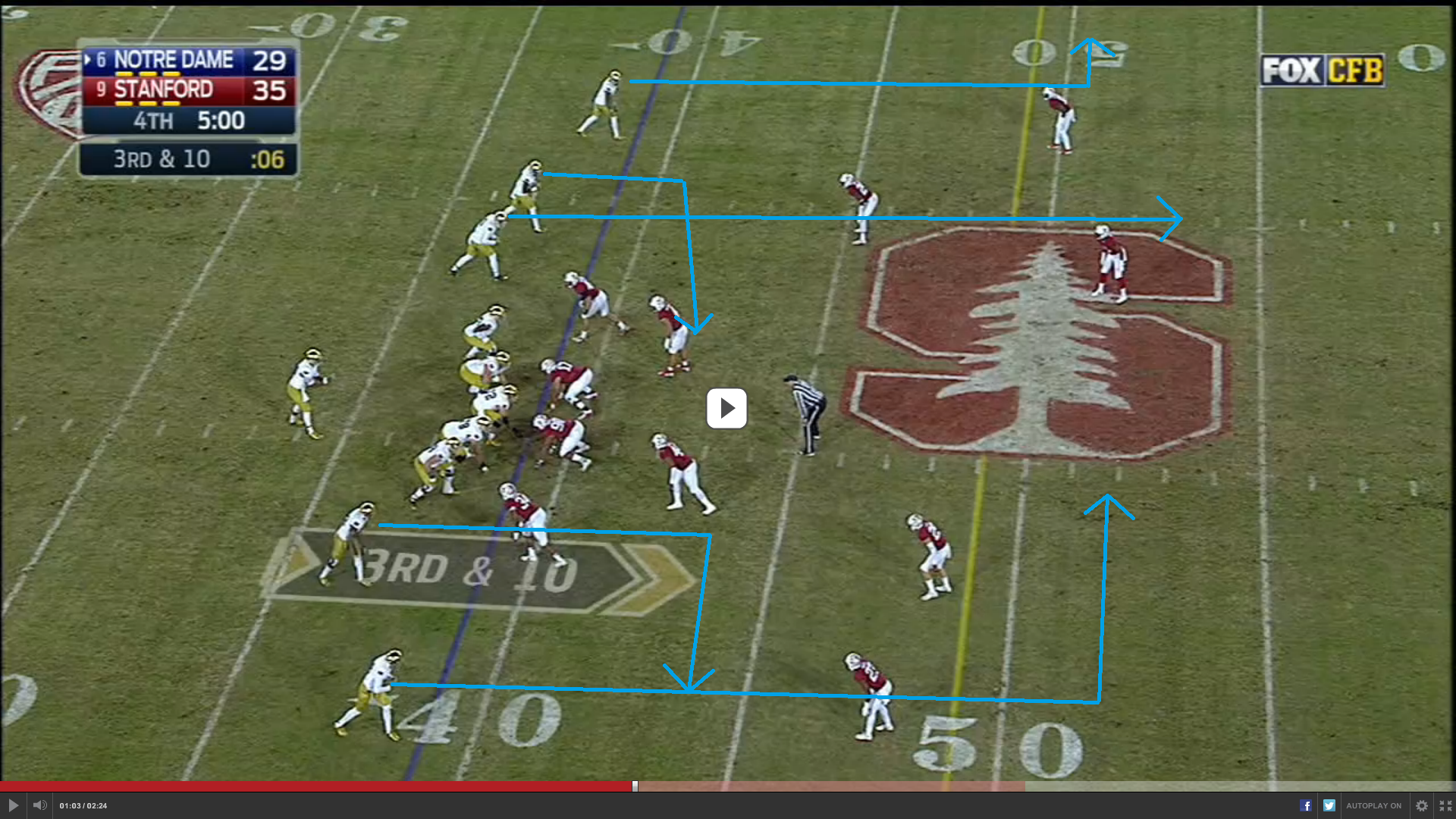 A key 3rd and 10 in the 4th quarter. If the Irish drive stalls, the game is likely over. Notre Dame will pass out of an empty set (blue arrows). 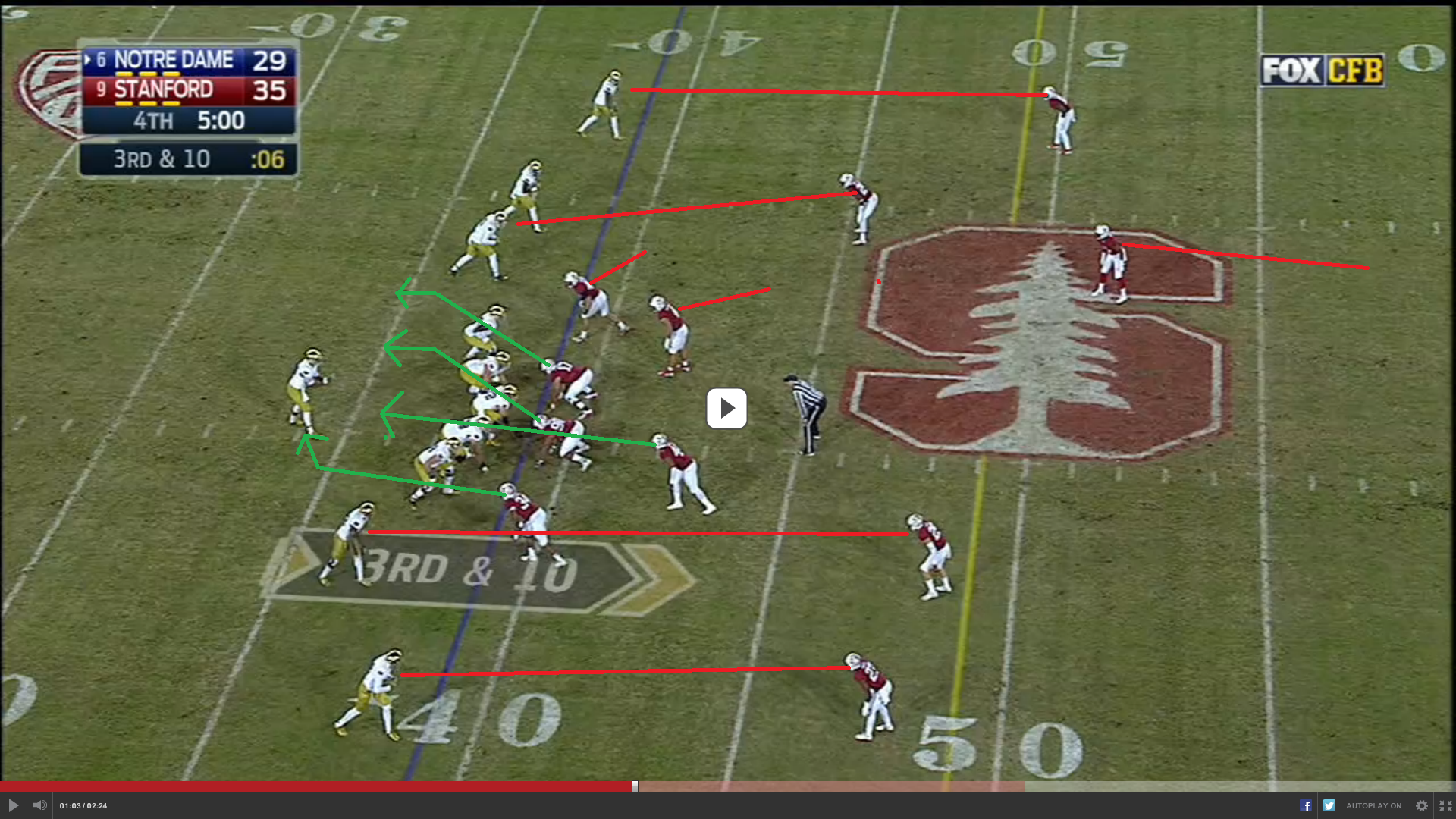 Stanford will play man cover with the DB's (the safety will be free) and drop a defensive end and linebacker into coverage over the middle (red lines).

The pass rush will be Brain VanGorderesque in that it will feature a dropping lineman combined with a blitzing linebacker (green arrows). 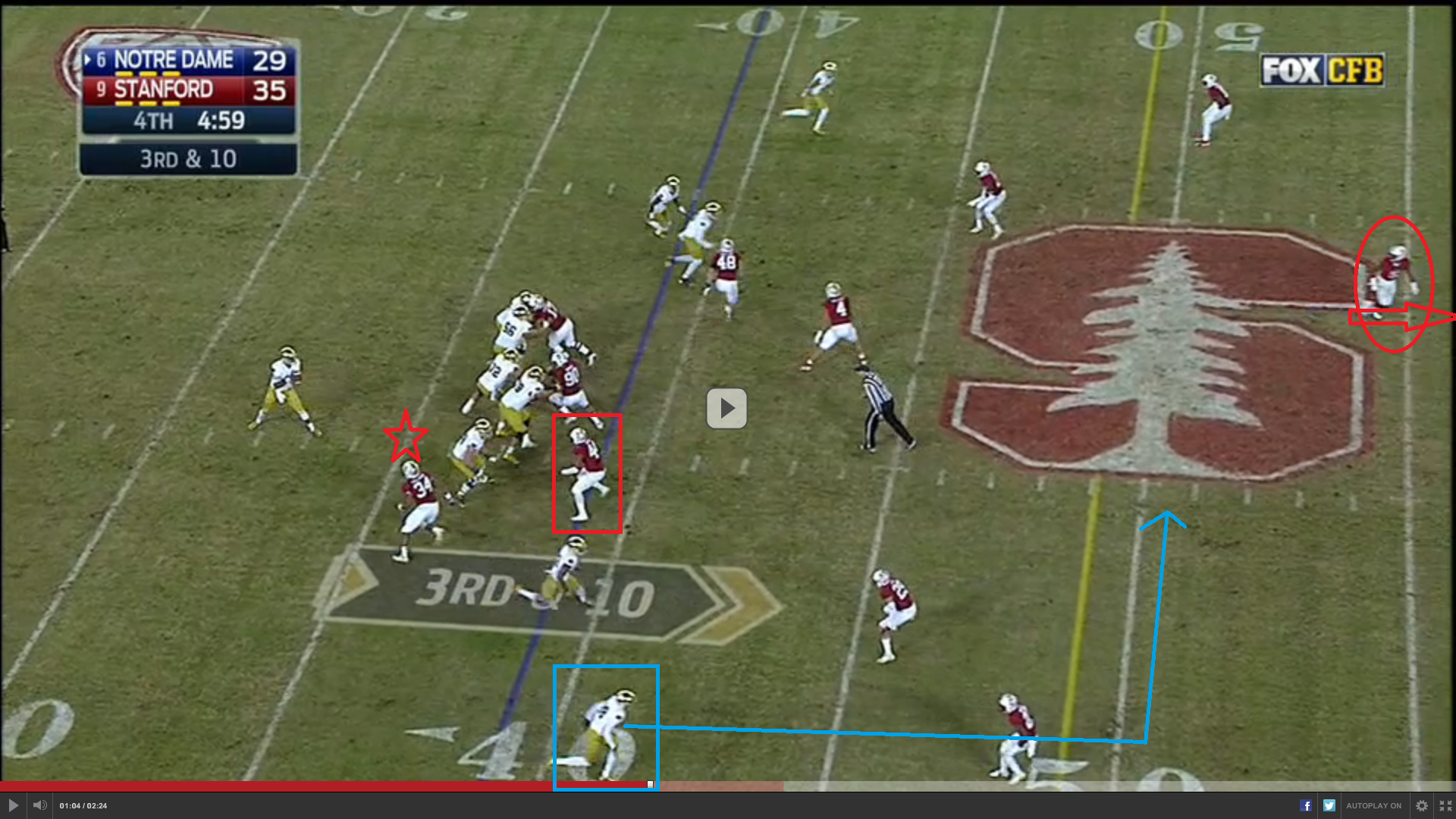 Kizer's first read is the safety (red circle). Right away he notices the safety drops (red arrow). This tells him that the deep "IN" pattern (sometimes called a dig pattern) with Corey Robinson (blue box and arrow) is likely going to be open. His next read will be the linebacker on that side. He's blitzing (red box) and therefore isn't a threat to get underneath the dig pattern.

The fly in the ointment is the rusher coming free off the edge (red star). The unblocked defender means there won't be much time to get the pass off. 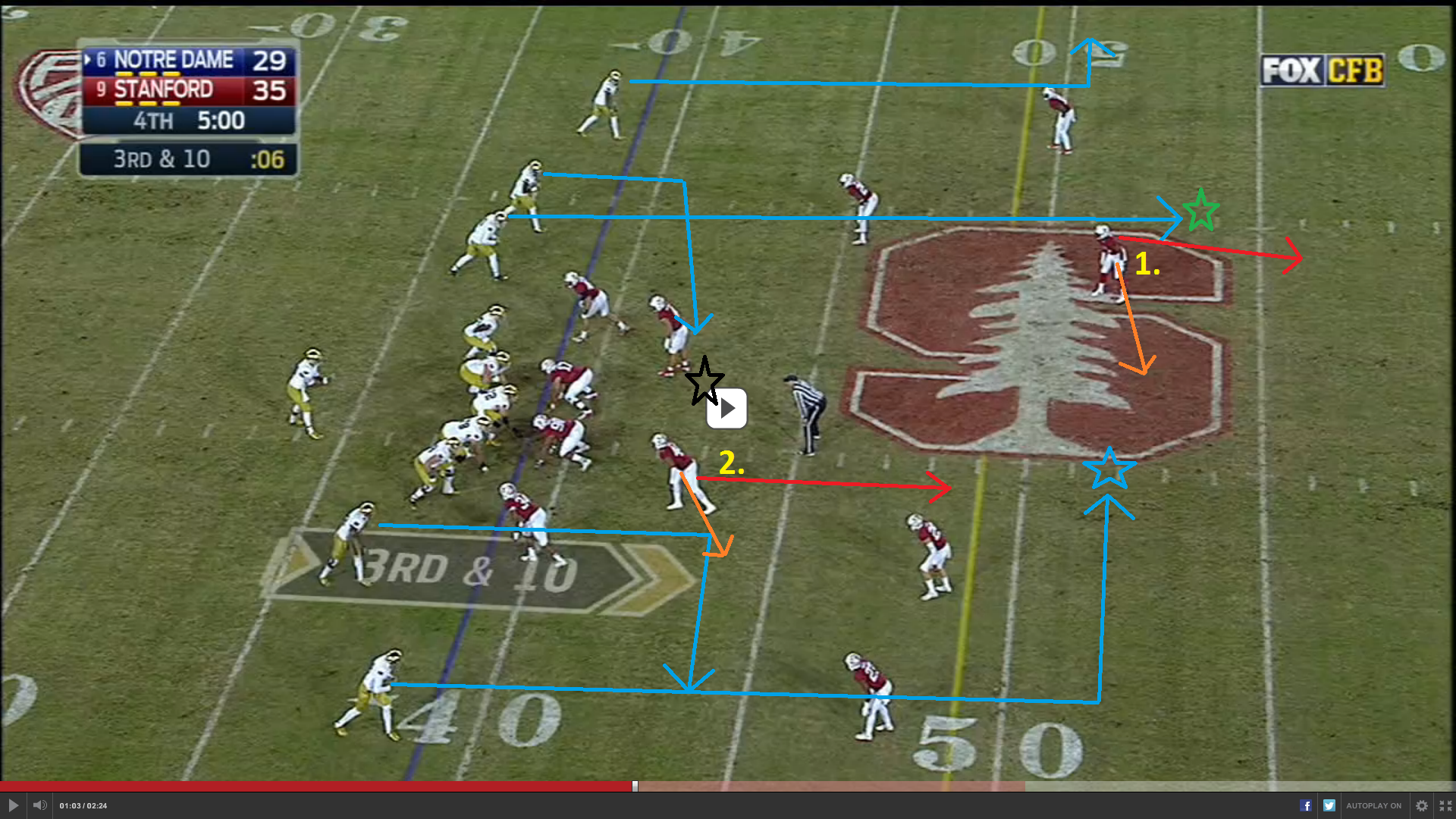 Let's talk about read progressions for a moment. Against this defense, the quarterback will generally start his progression with the safety (yellow 1.). If the safety's drop is relatively flat (orange arrow) the QB will throw to the vertical pattern (blue arrow, green star).

Pretty easy right? Now try processing all of this in a few seconds, in front of thousands of screaming fans (well it's Stanford, so thousands of people talking a touch louder than usual), a national TV audience, while angry defenders try to hit you. 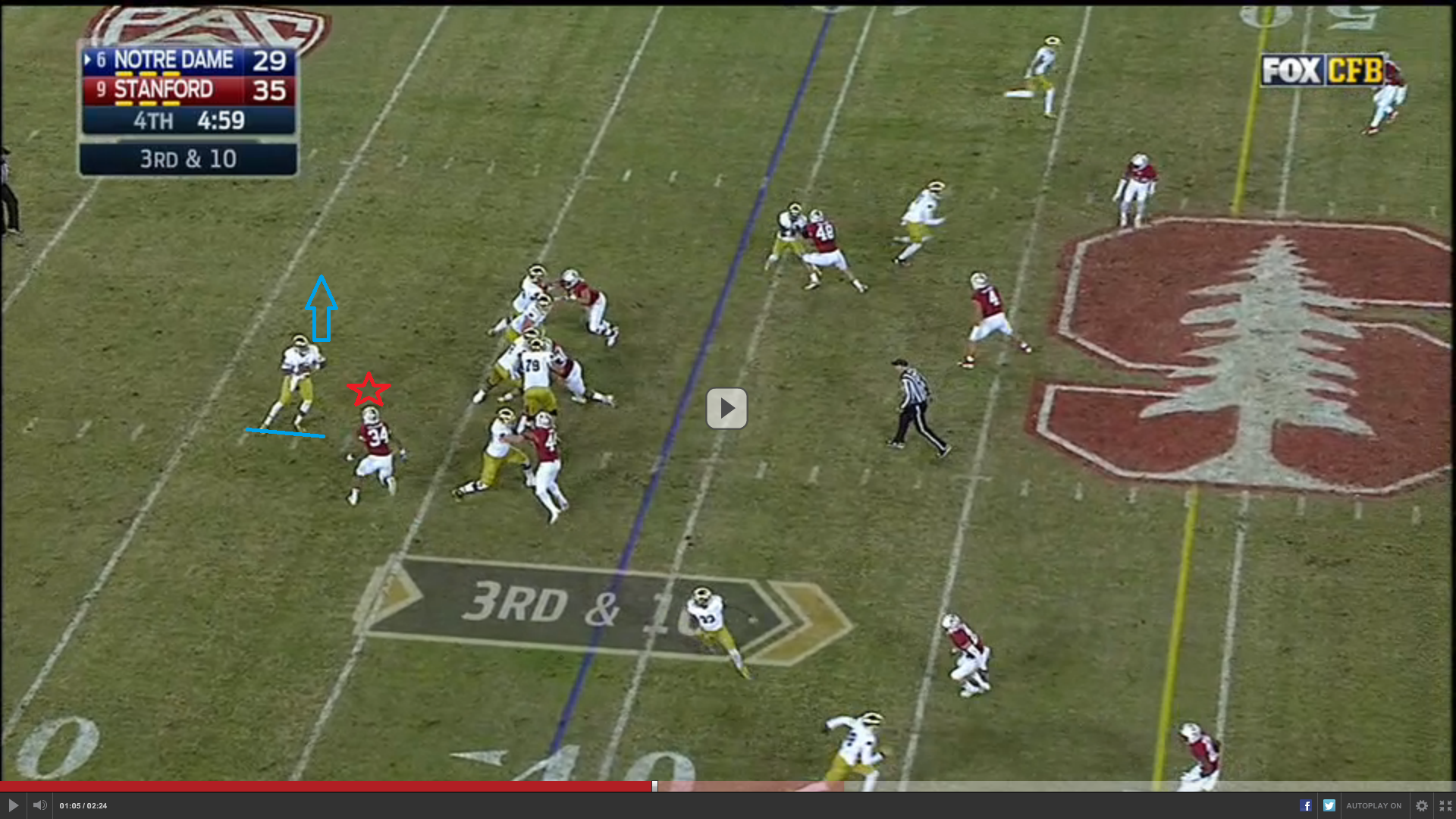 Let's get back to the crux of the article. Pocket presence. Kizer understands that he has to buy time to let the route develop. The only thing he can do is slide away from the blitzer (blue arrow) and hope this will give him enough time before he gets crushed. 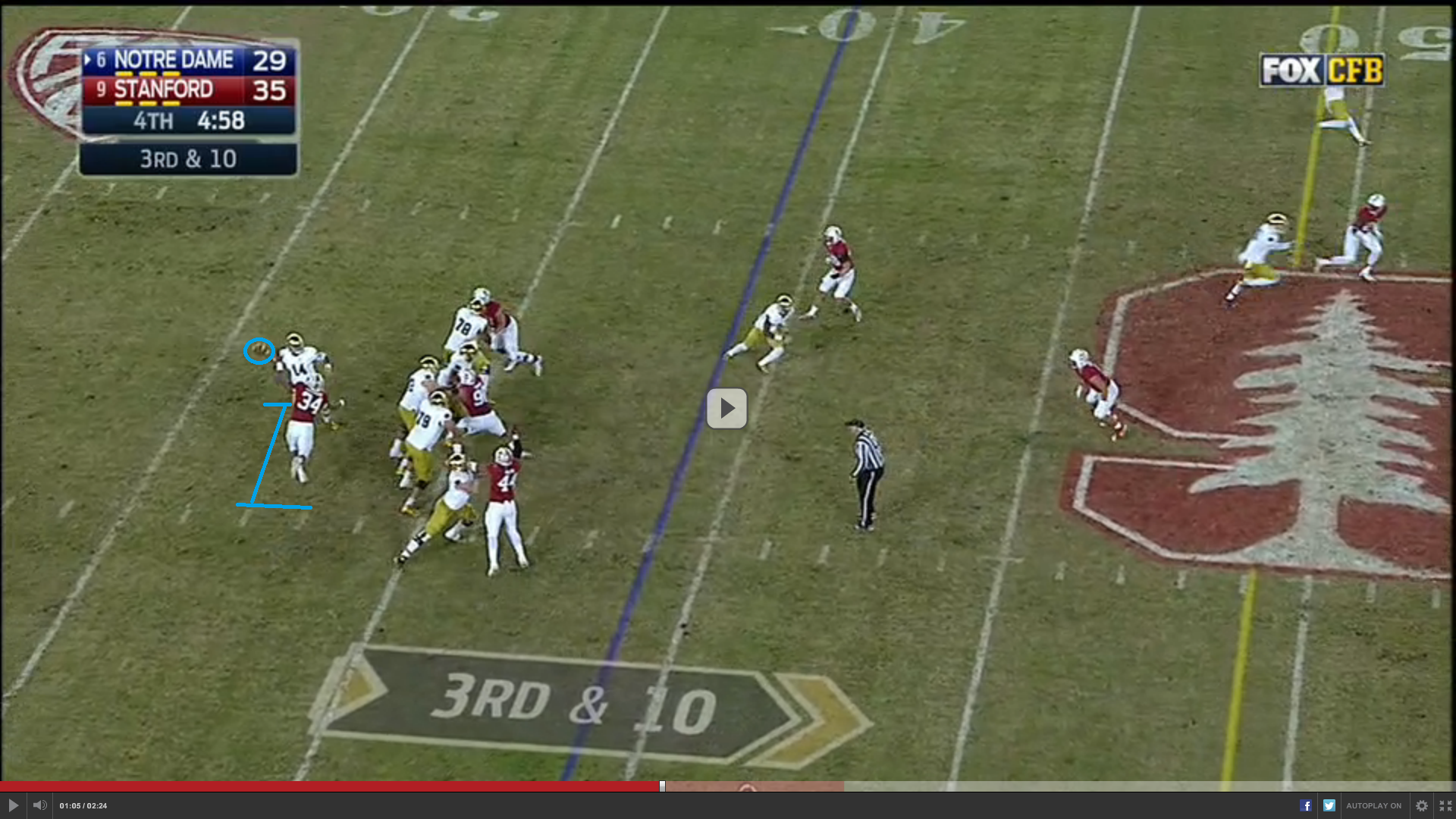 Kizer is just about to throw the ball (blue circle). Look how far he has moved (blue lines). Although subtle, this is a phenomenal adjustment. Kizer doesn't panic. He knows he is going to get hit, but he slides and keeps his eyes down field so he can complete the pass. This is what great pocket passers do. 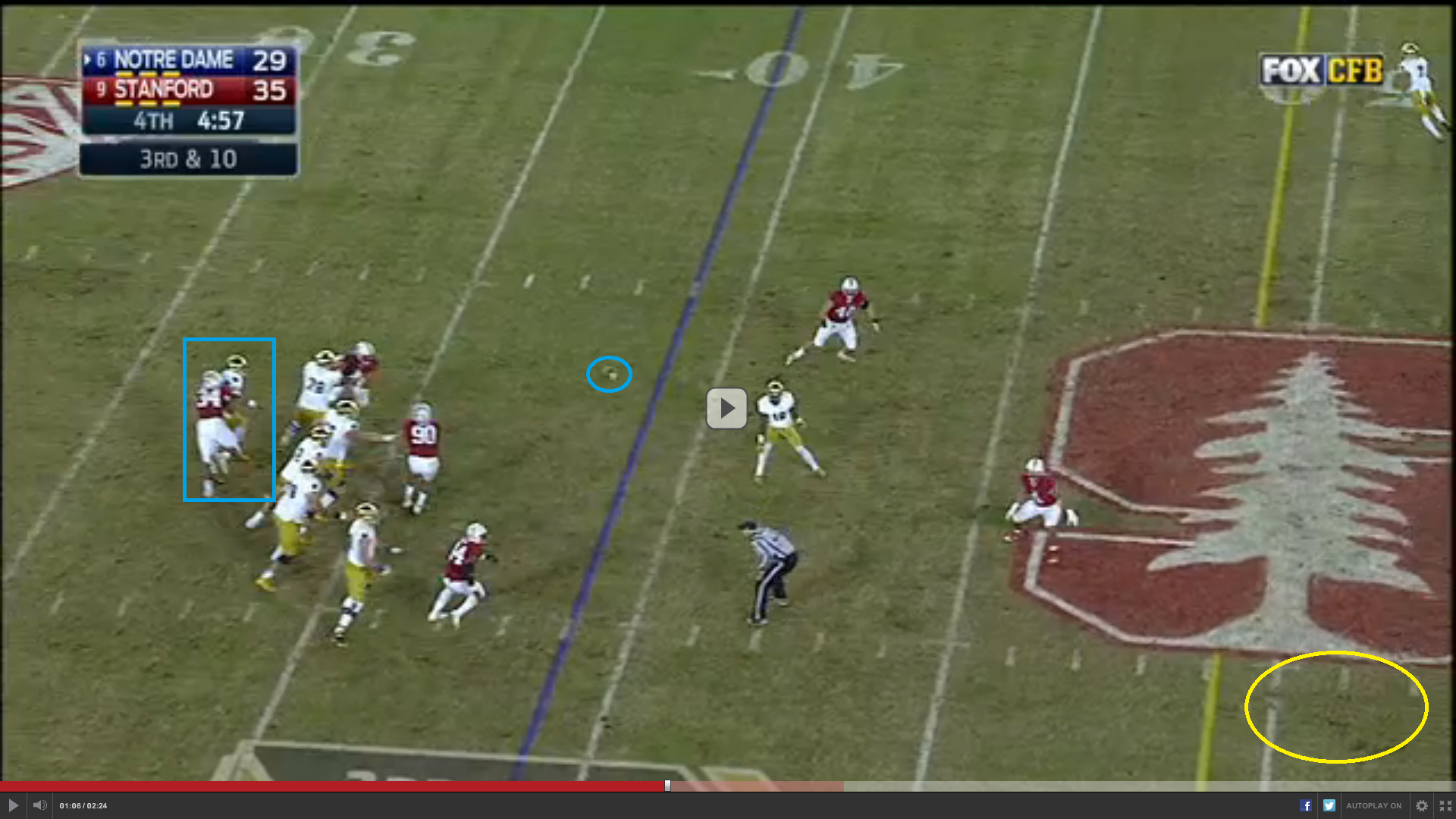 The ball is in the air (blue circle) and Kizer bought just enough time (blue box). Hopefully a receiver arrives soon because no one is even close in this screen shot (yellow circle). 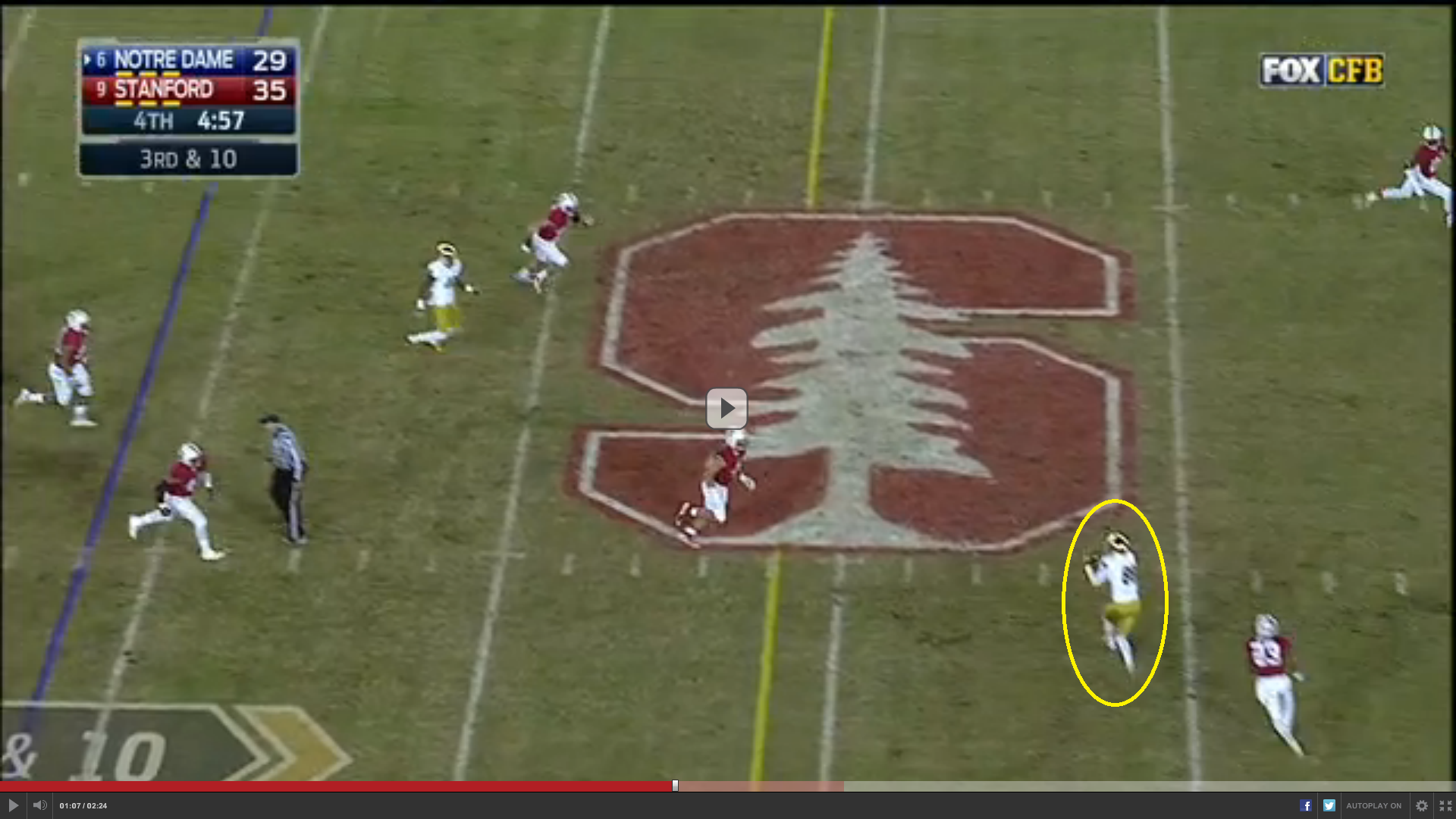 The catch is made (yellow circle). The key to this play was Kizer. He stayed calm, moved his feet, kept his eyes downfield, anticipated the route and then delivered a perfect strike under considerable duress.

Hopefully Kizer makes a bunch of plays like this on New Year's Day. If he does, fans likely won't notice... except when they look at the scoreboard at the end of the game.