Ring in the New Year with our final photo caption contest of 2015! (Warning: lots of Shakespeare.)

SCENE: Jack Swarbrick steps up to a podium on Battlefrog Fiesta Bowl Media Day, wearing steel-rimmed spectacles and a steely-eyed expression as he faces the reporters. Team 127 is seated on the stage behind him, unsure of what Swarbrick will say or how the crowd will react. There is a smattering of jeers and "FIRE KELLY" shouts from the back of the crowd, mainly from a small group of elderly chaps with big grey beards and pointy hats canes and "1988 National Champions" buttons, who are clamoring for Kelly to be fired after a paltry 10-win season. Jack raises his hand for silence, and once the crowd obliges, he begins his speech:

Friends, Irish, countrymen, lend me your ears!
I come to fire Kelly, not to praise him.
The losses that men do live after them;
The wins are oft interred with their bones;
So let it be with Kelly. The noble Meyer
Hath told you Kelly was ambitious:
If it were so, it was a grievous fault,
And grievously hath Kelly answer'd it.
Here, under leave of Meyer and the rest--
For Meyer is an honorable man;
So are they all, all honorable men--
Come I to speak at Kelly's demise.
He was my friend, faithful and just to me:
But Meyer says he was ambitious;
And Meyer is an honorable man.
He hath brought many victories home to South Bend
Whose sons and daughters did the student section fill:
Did this in Kelly seem ambitious?
When the injured warriors have cried, Kelly hath wept:
Ambition should be made of sterner stuff:
Yet Meyer says he was ambitious;
And Meyer is an honorable man.
You all did see that in the Valley of Death
They thrice dealt his team mortal blows,
Which he did thrice refute: was this ambition?
Yet Meyer says he was ambitious;
And, sure, he is an honorable man.
I speak not to disprove what Meyer spoke,
But here I am to speak what I do know.
You all did love him once, not without cause:
What cause withholds you then, to mourn for him?
O judgment! thou art fled to brutish beasts,
And men have lost their reason. Bear with me;
My heart is on the sidelines there with Kelly,
And I must pause till it come back to me.

The assembled players, fans, and reporters stir and mutter among themselves. Suddenly, a shout arises from among the crowd as Kelly himself appears on stage, obviously not fired. But as a smiling Swarbrick yields the microphone to Kelly, a voice cries out:

VanGorder: O that we now had here
But one ten thousand of those men in South Bend
That do not play defense to-day!

Brian Kelly turns his head to see that the speaker is none other than a downcast Brian VanGorder, whose defensive ranks have been cruelly ravaged by injuries all year long, even on the eve of the Fiesta Bowl (played on the Solemnity of Mary, Mother of God). Kelly smiles and places a hand on VanGorder's shoulder, then turns to address the crowd and his players:

What's he that wishes so?
My assistant, VanGorder? No, my friend;
If we are mark'd to lose, we are enow
To do our school loss; and if to win,
The fewer men, the greater share of honour.
God's will! I pray thee, wish not one man more.
By Jove, I am not covetous for gold,
Nor care I who doth feed upon my cost;
It yearns me not if men our jerseys wear;
Such outward things dwell not in my desires.
But if it be a sin to covet honour,
I am the most offending soul alive.
No, faith, my friend, wish not a man from South Bend.
God's peace! I would not lose so great an honour
As one man more methinks would share from me
For the best hope I have. O, do not wish one more!
Rather proclaim it, VanGorder, through my host,
That he which hath no stomach to this fight,
Let him depart; his passport shall be made,
And coins for airfare put into his purse;
We would not lose in that man's company
That fears his fellowship to lose with us.
This day is call'd the feast of Our Lady.
He that outlasts this day, and comes safe home,
Will stand a tip-toe when this day is nam'd,
And rouse him at the name of Our Lady.
He that shall win this day, and see old age,
Will yearly on the vigil feast his neighbours,
And say "To-morrow is Our Lady."
Then will he strip his sleeve and show his scars,
And say "These wounds I had on Our Lady's day."
Old men forget; yet all shall be forgot,
But he'll remember, with advantages,
What feats he did that day. Then shall our names,
Familiar in his mouth as household words--
Yoon the Kicker, Jaylon and Fuller,
Kizer and Stanley, Sheldon and Prosise--
Be in their flowing cups freshly rememb'red.
This story shall the good man teach his son;
And Mary, Mother of God shall ne'er go by,
From this day to the ending of the world,
But we in it shall be remembered--
We few, we happy few, we band of brothers;
For he to-day that sheds his blood with me
Shall be my brother; be he ne'er so vile,
This day shall gentle his condition;
And gentlemen in South Bend now a-bed
Shall think themselves accurs'd they were not here,
And hold their manhoods cheap whiles any speaks
THAT FOUGHT WITH US UPON OUR LADY'S DAY!!!

Kelly's voice, which began the speech so softly, has steadily grown into a full-throated roar. As he shouts his final verse into the microphone, Team 127 erupts behind him with bloodcurdling war cries and chants of victory. Kelly is carried off the stage by the team, a moment witnessed by stunned reporters and Ohio State fans. The next day, the Fighting Irish take the field against the Buckeyes and manhandle them all game long for a final score of 42-7, Notre Dame.

As I'm sure you've all noticed with great lamentations, TSW (basically a silly photo caption/photoshop contest, for those of you new to the site) has been on hiatus for the last few weeks. However, that will not prevent us from honoring ConcreteCharliee for taking home the top prize in our Conference Championship Week TSW! 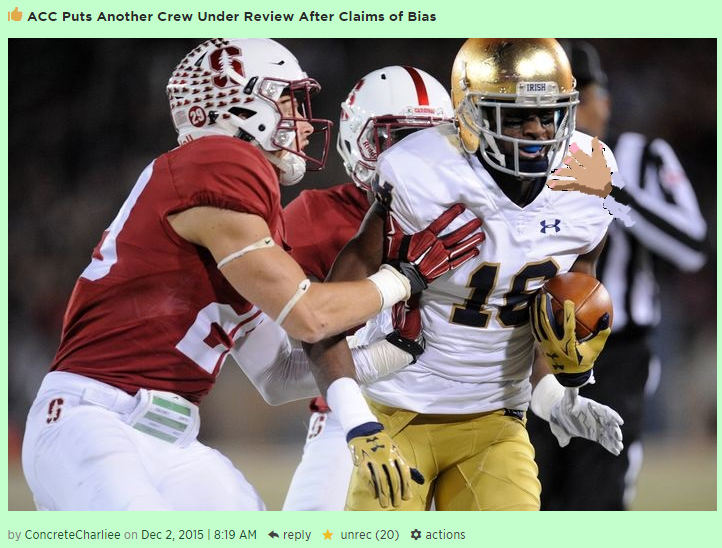 In that same article, the Commentariat declared that they were most excited to watch... 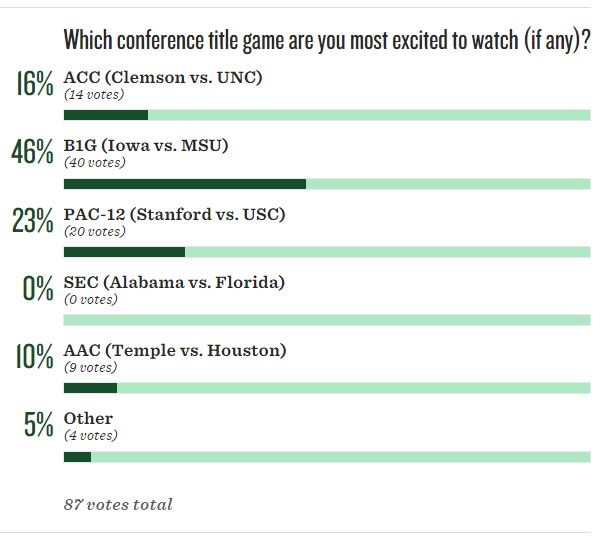 ...the B1G Title Game! Pretty darn good choice, if you ask me!

Alright folks, we've only got a couple days until Notre Dame takes on Ohio State...so I want you to focus all your not-inconsiderable intellectual powers into the task of creating a silly caption or photoshop for the cover photo of Coach Urban Meyer being silly. Keep it clean, keep it classy, and have fun! And now, for the last time until next August...