Yes scheme was part of the problem this year

A 10-2 record is pretty darn good. Even though the Irish finished the 2015 regular season with exactly that record, it feels as though this year could have been even better. One of the primary reasons for this feeling is a defense that showed incredible potential and frustrating inconsistency.

In this post we will focus on the role the defensive scheme played in this inconsistency. Although I don't necessarily subscribe to the theory that the scheme is too complex, there is no doubt that at times players were put in positions that made it difficult for them to succeed. Let's take a look at the film and I'll show you what I mean. 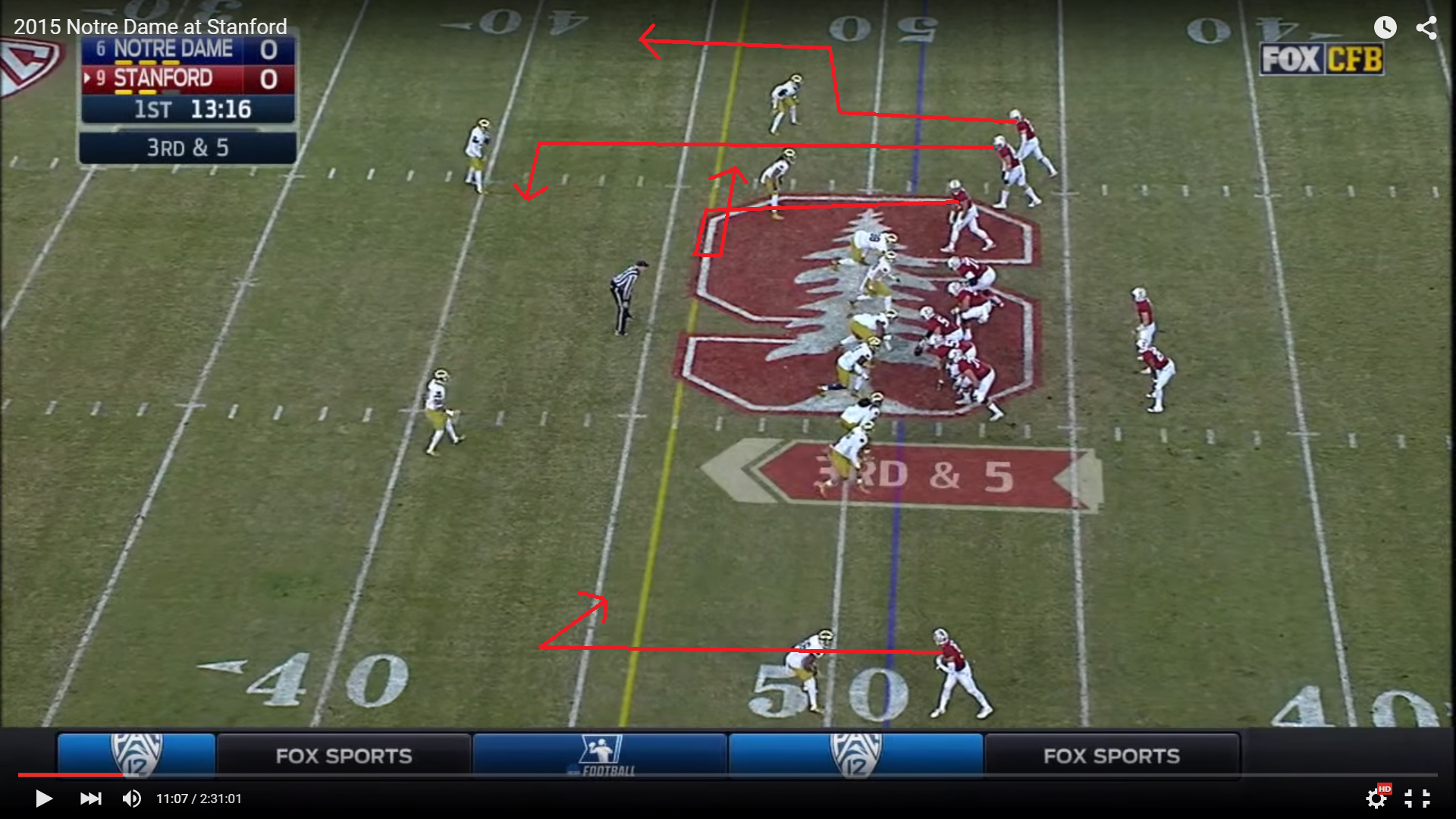 3rd and 5 Stanford is going to release 4 receivers (red arrows) and try to pass for the first down. 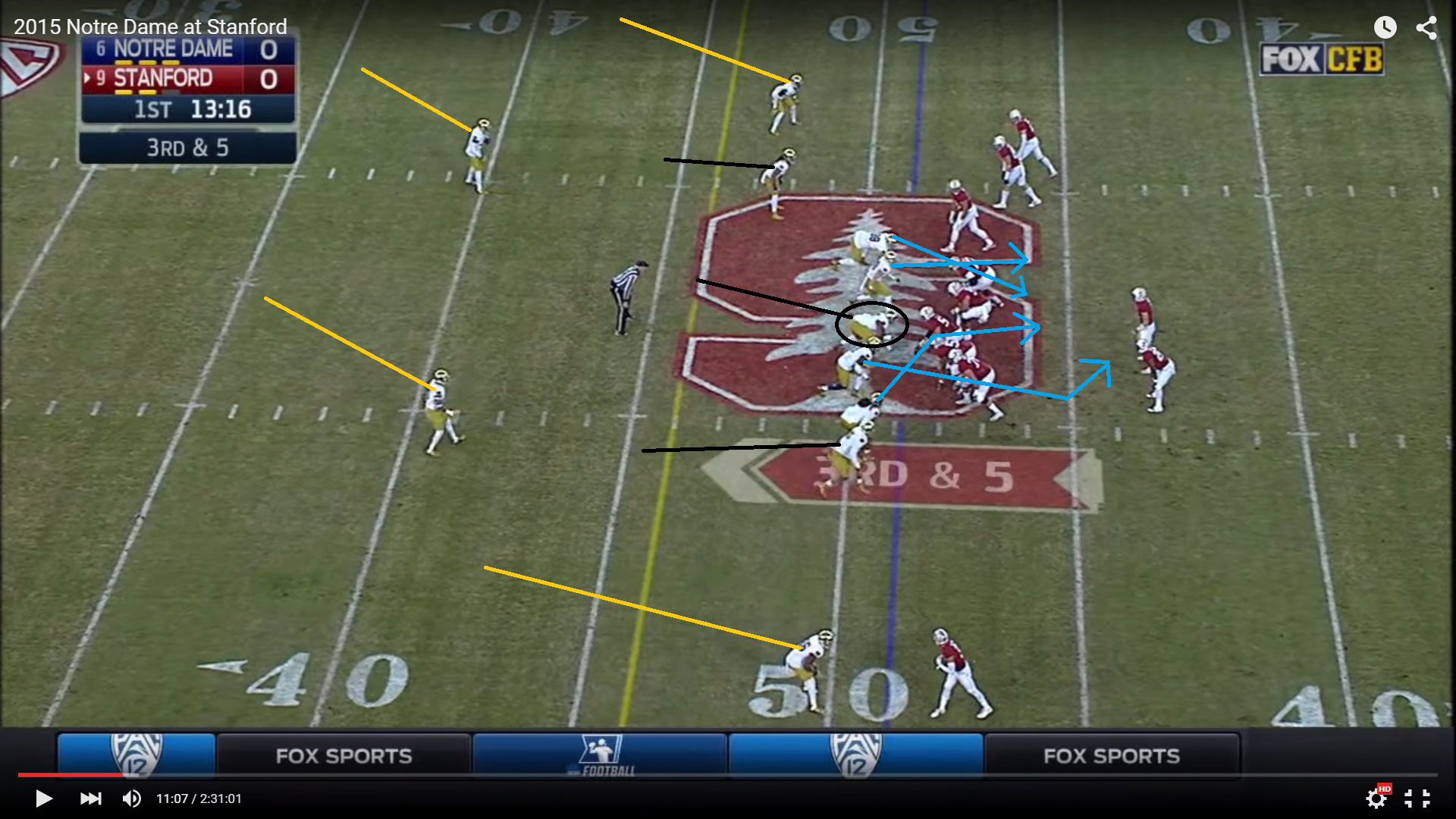 The Irish are going to rush 4 and drop 7, a pretty common defensive response on 3rd and 5. As you can see the deep coverage is fairly traditional (gold lines).

Notre Dame will have 3 defenders responsible for underneath coverage (black lines) (technically one of the corners might have underneath responsibilities depending on the route combination, but we don't need to get bogged down in those details). What is unique about this is not the number of players dropping underneath; it's that the nose tackle (black circle) is going to drop into coverage.

The pass rush will be comprised of two defensive linemen and 2 linebackers (blue lines). This screen shot illustrates one of the hallmarks of the Brian VanGorder defensive scheme. A number of players amassed at the line of scrimmage pre-snap. Post-snap, some drop into coverage and some rush the passer. The idea is to confuse the offense and force them into an error.

The ball has just left the quarterback's hand (red circle). The Irish were able to get some pressure (blue arrows), but not enough to get a sack.

The ball will arrive somewhere around the red star. Mathias Farley (# 41) is in good position to make a play (black arrow). 287 pound nose tackle Isaac Rochelle is in coverage (black box) and is actually in decent position to break on the ball and make this a difficult throw into a tight window. 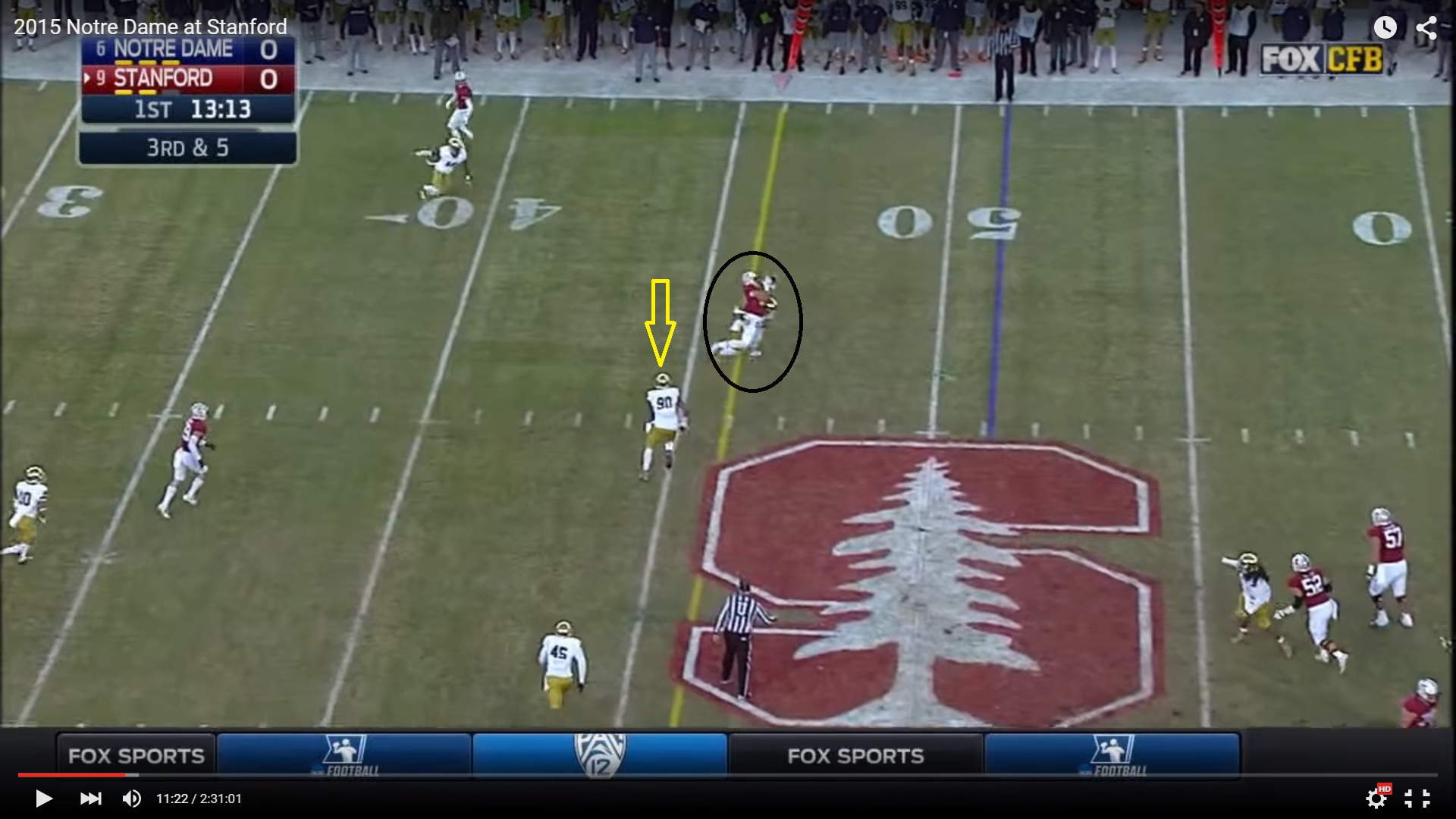 Farley gets a good break and arrives at the same time as the ball (black circle). As you can see Rochelle is trailing far behind the play (yellow arrow). This is one of the disadvantages of dropping linemen into coverage. They aren't in their comfort zone in open space. It takes a lot of practice and agility to be able to break on the ball effectively in zone coverage. Even so, this was actually a decent play by the Irish defense and an even better play to get the first down by Stanford. 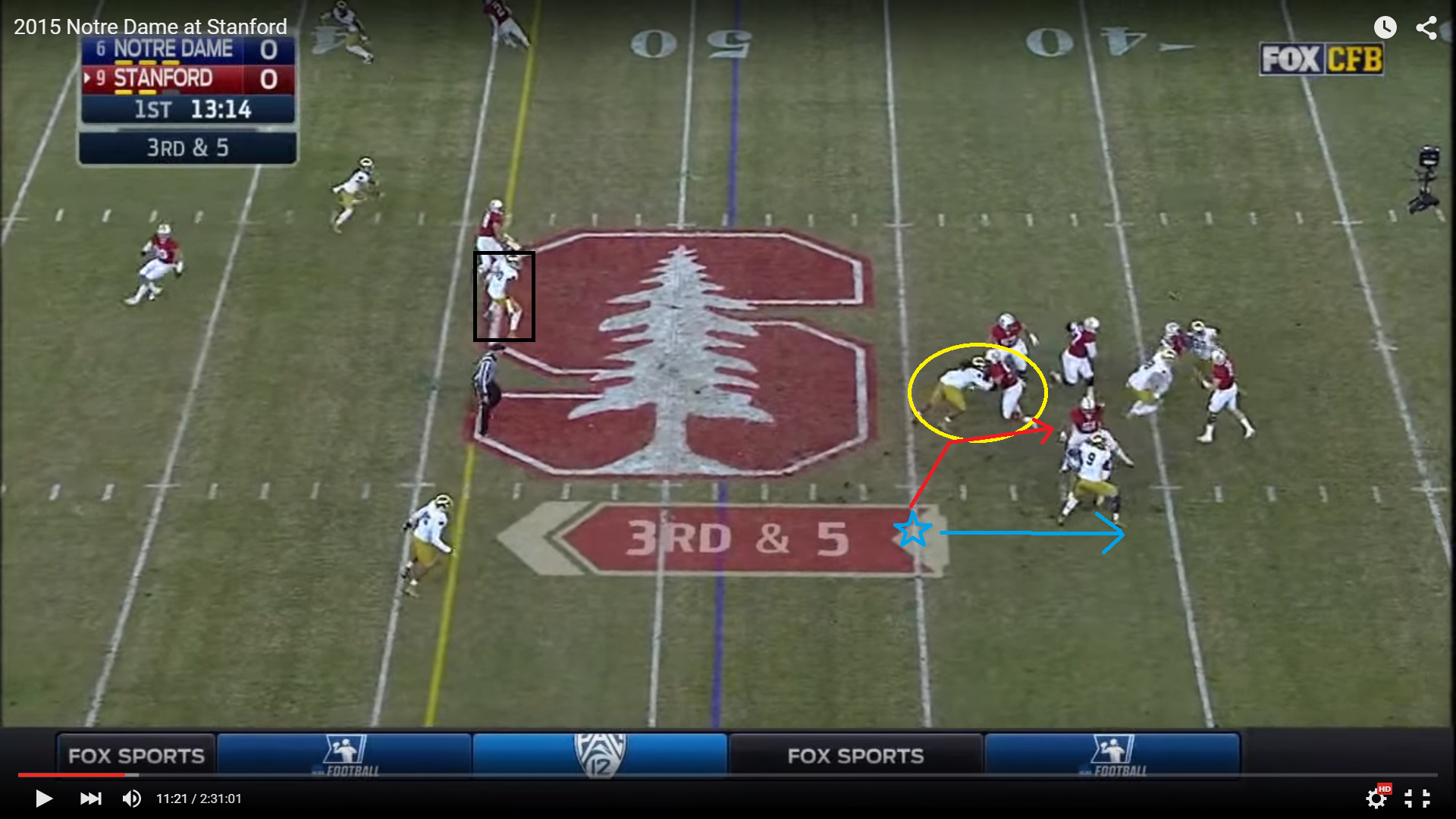 Everyone knows that defensive linemen aren't great when dropping into zone coverage, so why do it? The idea is to confuse the quarterback and the offensive line as they wouldn't typically expect the nose tackle to drop into coverage (black box).

In this case the plan was to drop the nose tackle and then loop Sheldon Day (# 91) back to the inside where the nose was (red line). In theory, this should confuse the center as he will focus on the nose tackle and be unaware that Day is coming from the outside (red line, blue star - the blue star represents Day's approximate initial alignment, the blue arrow represents the traditional pass rush lane for this alignment).

Unfortunately, in this case it didn't work. The center picked up the stunt fairly easily (yellow circle) and the quarterback wasn't overly confused by the nose dropping to the middle. This lack of confusion from the QB makes sense. Normally the middle linebacker would be in this zone. in essence, all this scheme has done is sent the middle linebacker to rush the passer and replaced him in coverage with the nose tackle. 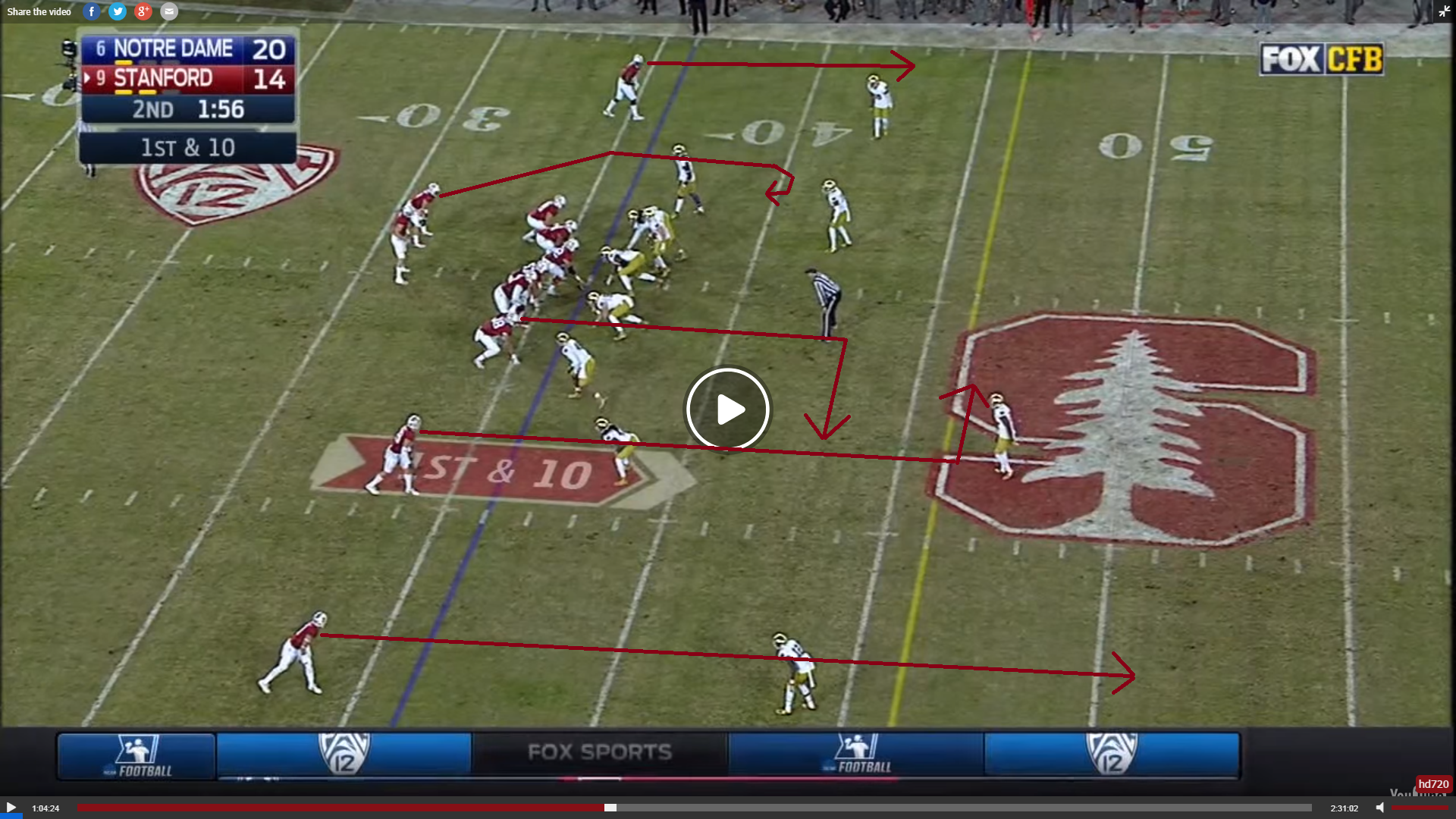 1st and 10, Stanford will release 5 receivers on this play (crimson arrows). 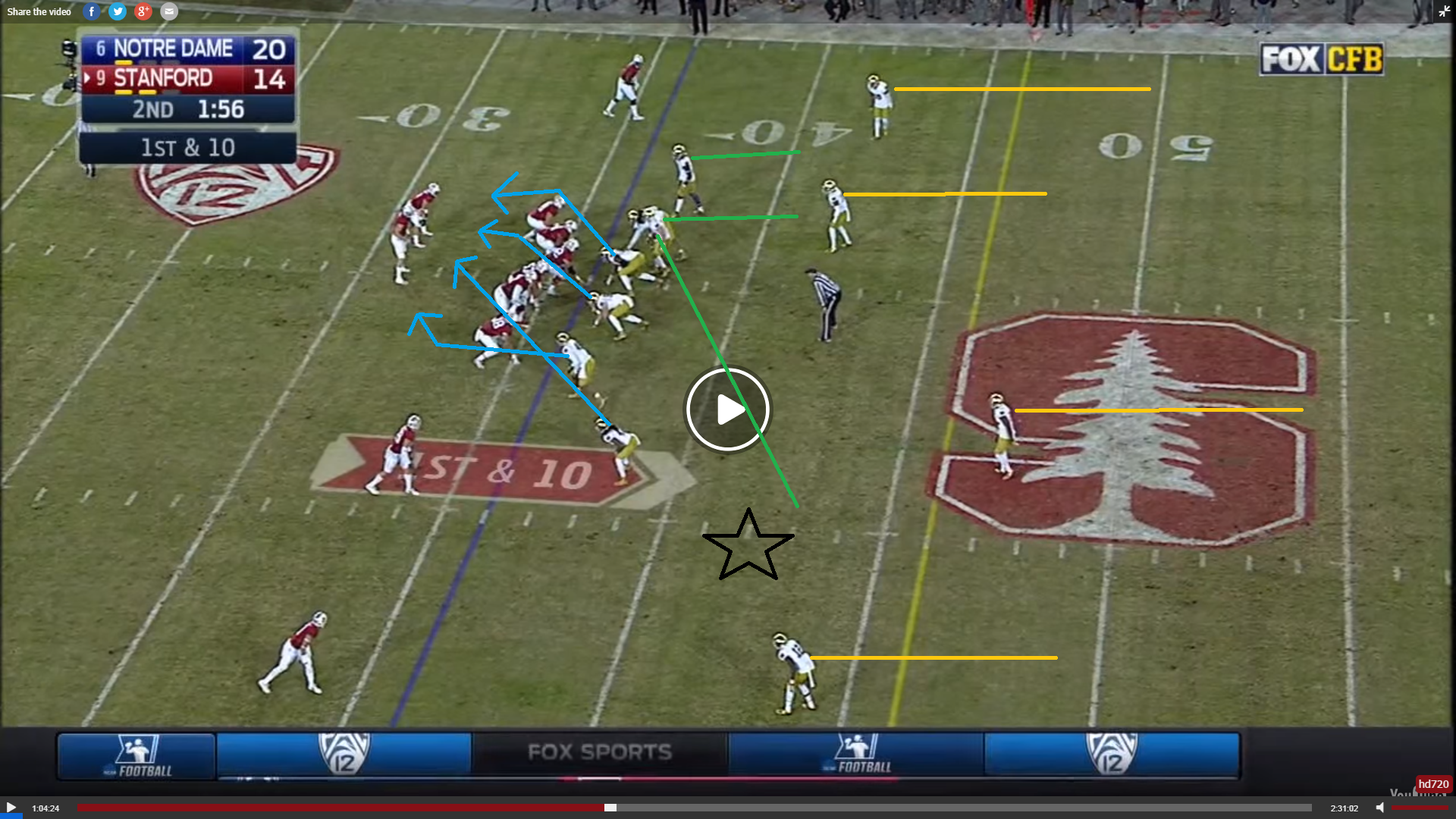 The Irish will counter with a four man pass rush and will drop 7 into coverage. Of course as with the previous play, this won't be a traditional rush 4 and drop 7. Notre Dame will use a delayed blitz with Mathias Farley, and a stunt to the short side (blue lines). The challenge will be to get underneath coverage (green lines) from the other side of the formation to occupy the space vacated by Farley's blitz (black star). 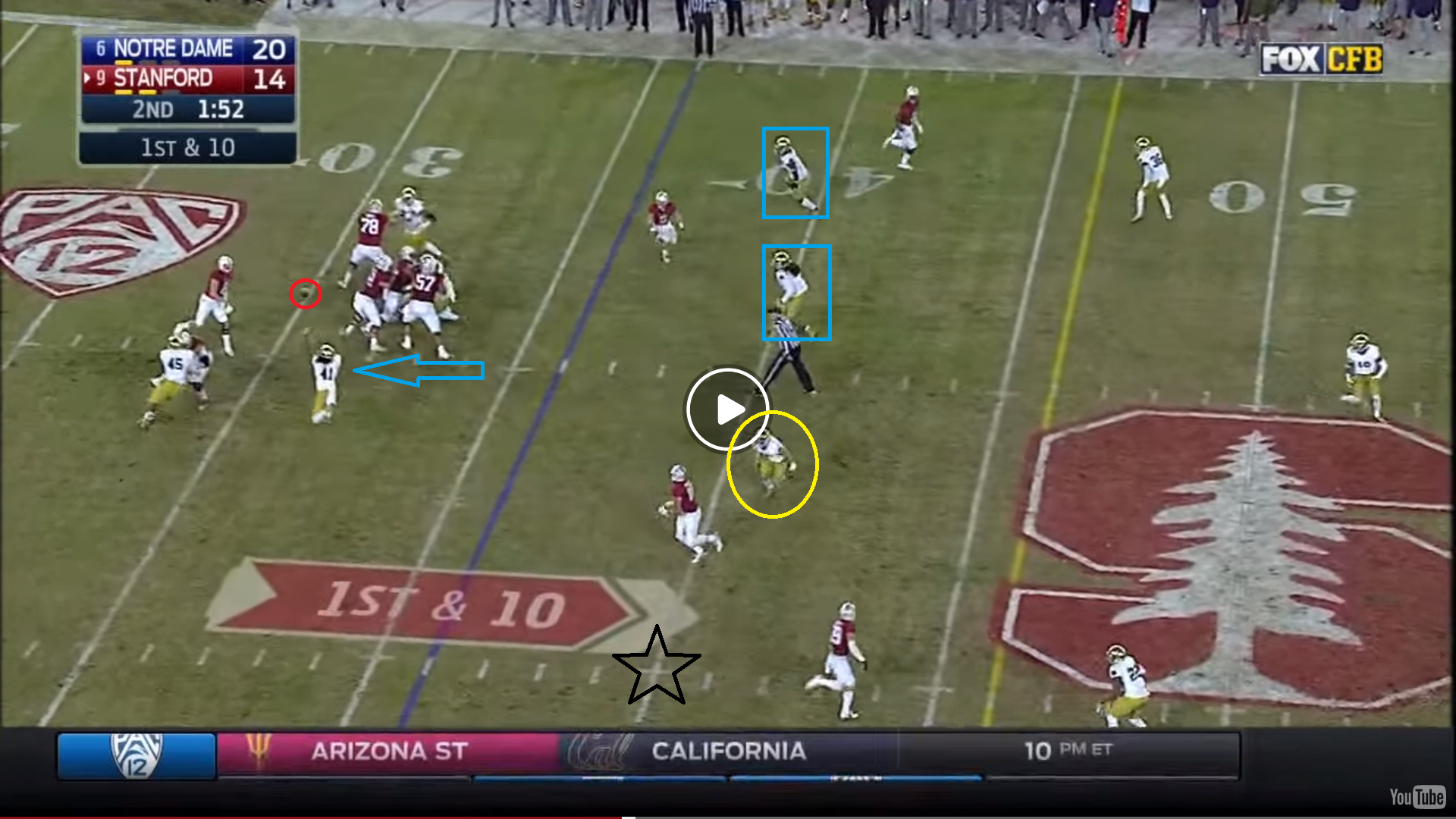 The ball is in the air (red circle) and Farley is still a long way away from the quarterback (blue arrow). In terms of underneath coverage, the spacing on this play is really poor. The short side of the field is covered by two players (blue boxes), while the wide side of the field is left virtually uncovered (black star).

Joe Schmidt was asked to line up on the short side of the field pre-snap even though his pass responsibility is on the wide side of the field. To make it even more difficult, he will need to cover an out pattern where the tight end already has outside alignment. Admittedly, Schmidt does move towards the middle of the field before the ball is snapped. Regardless (or irregardless as we like to say in the department of redundancy department) the scheme puts him in poor position to make a play (yellow circle).

At the same time, Sheldon Day is also put in a position that will make it difficult to be successful. Instead of rushing the passer he is dropping into coverage (one of the blue boxes). This isn't his forte. 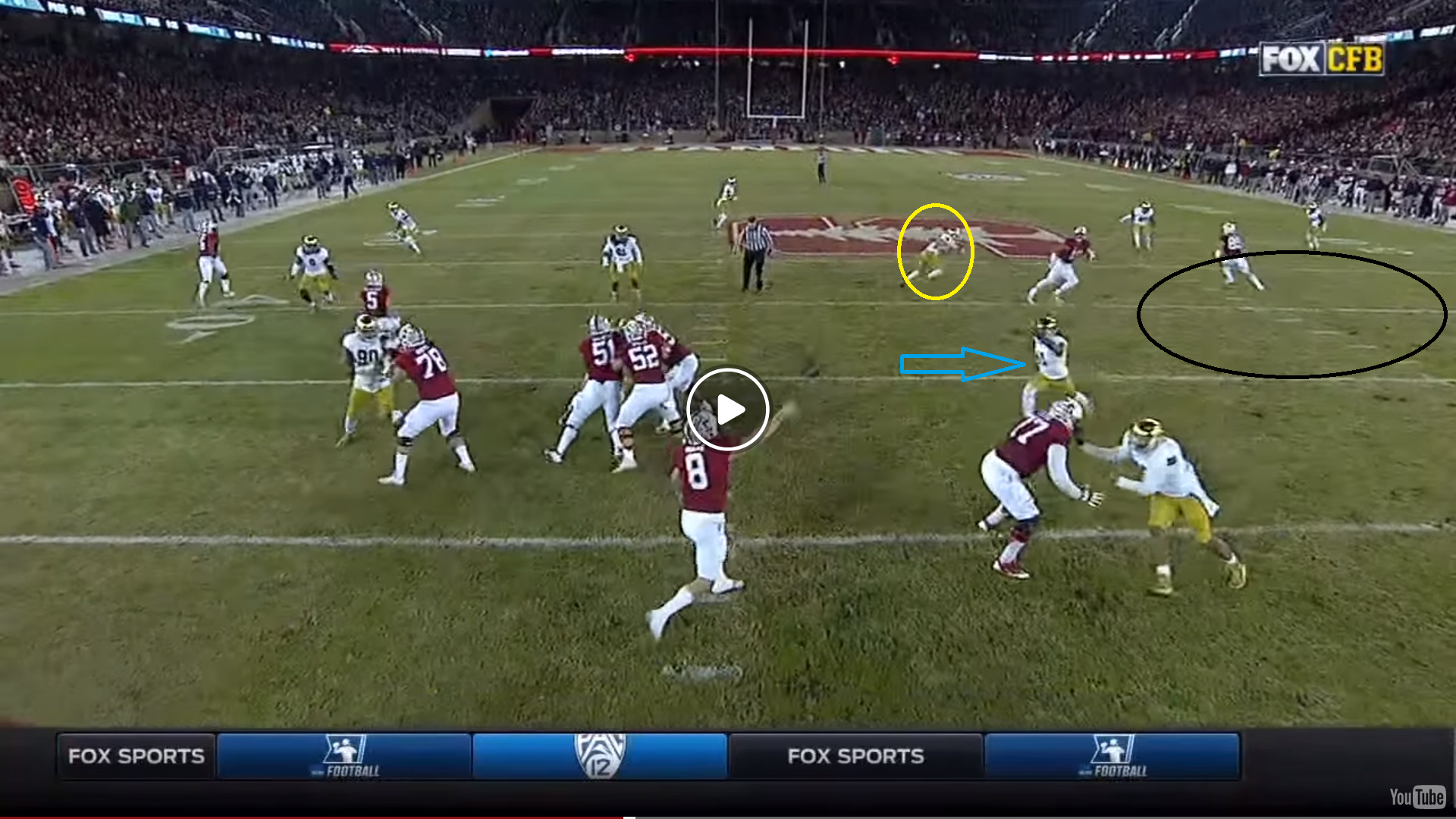 Here it is from the quarterback's perspective. The problems on this play start with the delayed blitz (blue arrow). If you are going to run a delayed blitz your coverage needs to force the quarterback to hold onto the ball a little longer. Joe Schmidt is in a bad position (yellow circle), not because of athleticism, but because the scheme put him behind before the ball was snapped. As you can see, the quarterback can simply throw the ball to the area vacated by the blitz (black circle). It's wide open, no reason to hold onto the ball. Pretty easy stuff and frankly not overly confusing.

One of the key problems with the Irish defense this year is a scheme designed to confuse the opposition often didn't confuse. More importantly, these attempts to confuse frequently put Notre Dame defenders in difficult positions (e.g. linemen in coverage, defenders expected to make plays on the opposite side of the formation).