The Trees are strong, and their roots grow deep...rip them all down.

The last time Notre Dame and Stanford played a game with postseason implications this huge, the defense was tasked with stopping a high-powered athlete who had the potential to impose his will on opposing defenses, score points through the air or ground, and be a general thorn in the side for opposing defenses. I'm speaking, of course, about John Elway.

Haha, I kid. Although this will be played in Palo Alto and not in cold, rainy South Bend, it will still evoke shades of Manti Te'o & Co. stuffing Stanford like a Thanksgiving turkey at the goal line 4 times in a row to preserve an undefeated season. In case you need a refresher, just give this a gander:

Yep, that's the one. If our boys in Madonna Blue & Papal Gold can pull off a huge win at Stanford, then we'll be looking mighty fine for the playoff picture. Here's hoping that we put together a complete effort for 60+ minutes and come out with a victory!

In last week's TSW for Boston College, we asked you to caption a photo of Sheamus (who just reclaimed the WWE Heavyweight Title this past week) celebrating with our snappers and holders. Here are the results:

--tlndma figured out why ND committed such a strange penalty against Wake Forest: 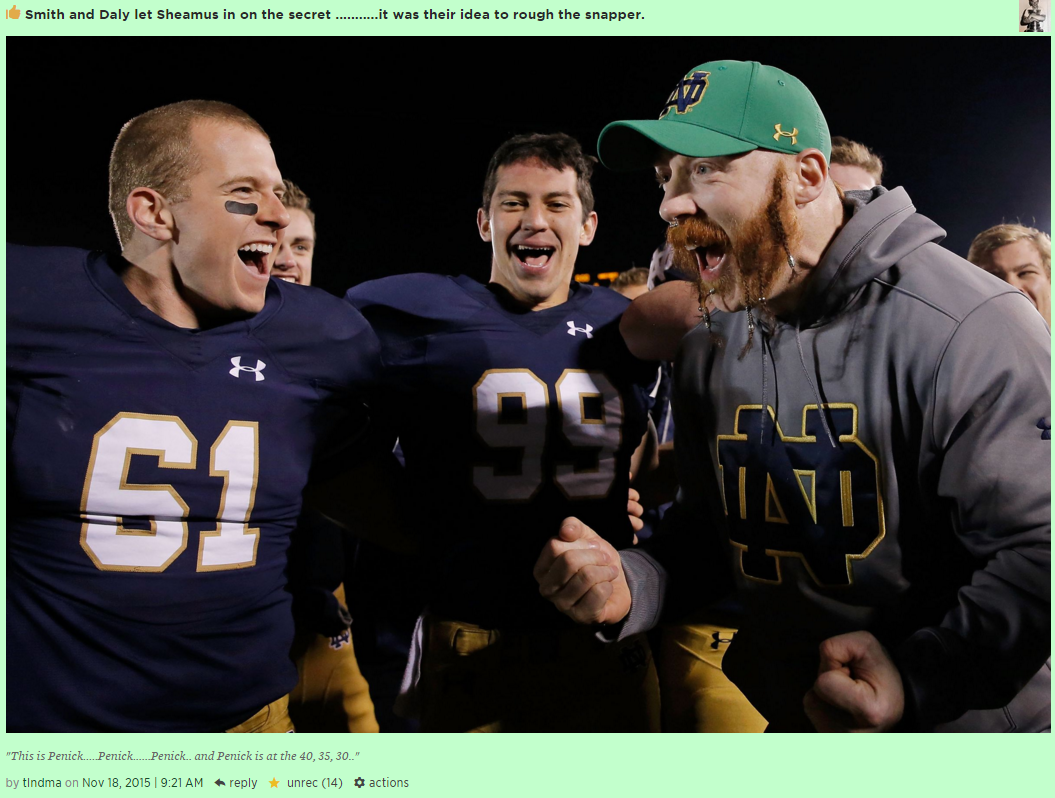 --goodoldtk captured a heartwarming (and brain-freezing moment) where Sheamus played the part of "awesome older brother" and brought postgame victory treats for everyone: 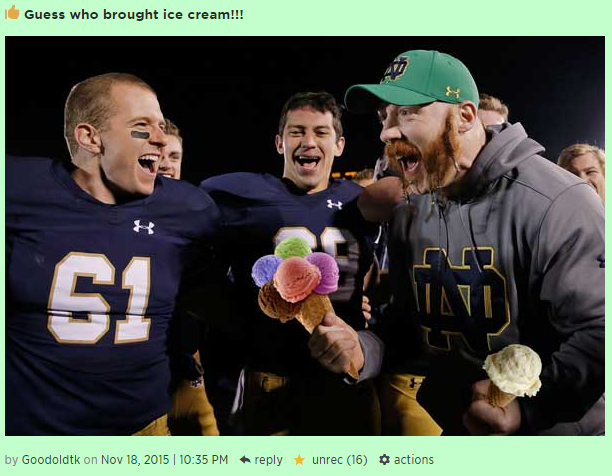 --And our winner is...Kendall Moore's beer gut, who overheard the bizarre true identity of this so-called "Sheamus" character: 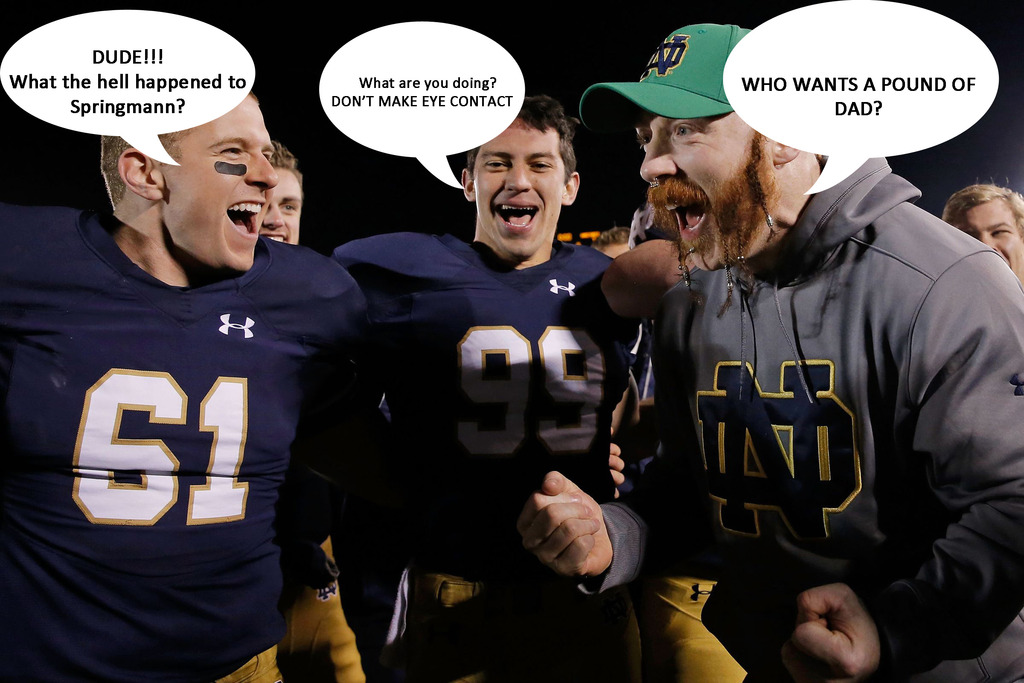 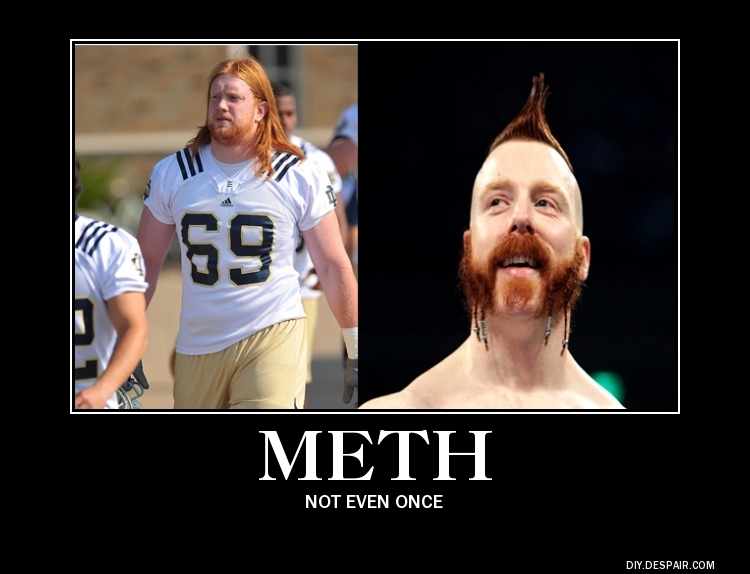 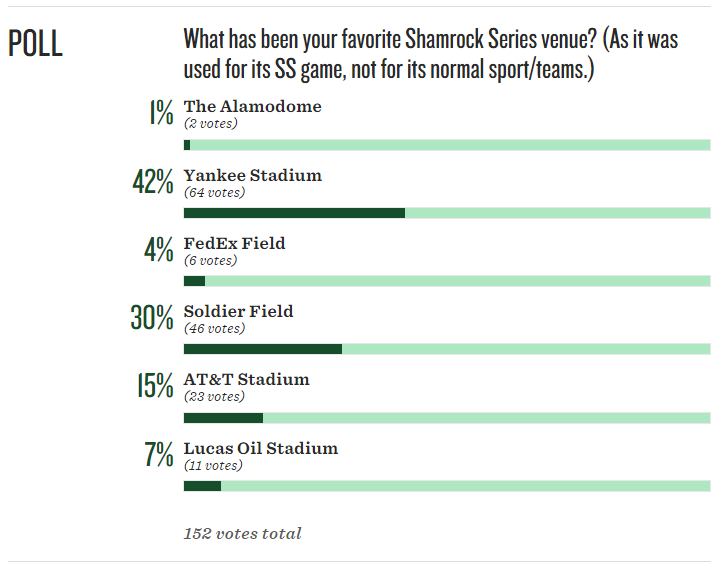 In a funny twist, it seems that most of you preferred our Shamrock Series outing in Yankee Stadium (where we easily beat Army), even before the near-debacle in Fenway Park. Sooo...maybe we should only play in the venues of other hate-able teams like the Patriots and the Lakers?

In our last regular-season TSW, the entry photo depicts the Leprechaun jumping and trying to pump up the (home?) Fenway Park crowd. It's Thanksgiving, so before you stuff yourselves with turkey, fight with in-laws, doze off in front of the TV, then celebrate the true spirit of Thanksgiving by murdering your fellow man to get the last Kylo Ren mask on Black Friday [ed. note: please don't do that], show us your best captioning and photoshopping efforts to inspire our boys onward to victory!