DeShone Kizer has some wheels!

To be honest, the Wake Forest game didn't exactly provide a plethora of interesting plays to breakdown. However, Notre Dame's final touchdown might just be the exception. DeShone Kizer displayed great decision making (not a big surprise) and very good speed (a bit of a surprise) on the final Irish touchdown. Let's take a look at the film and I'll show you what I mean 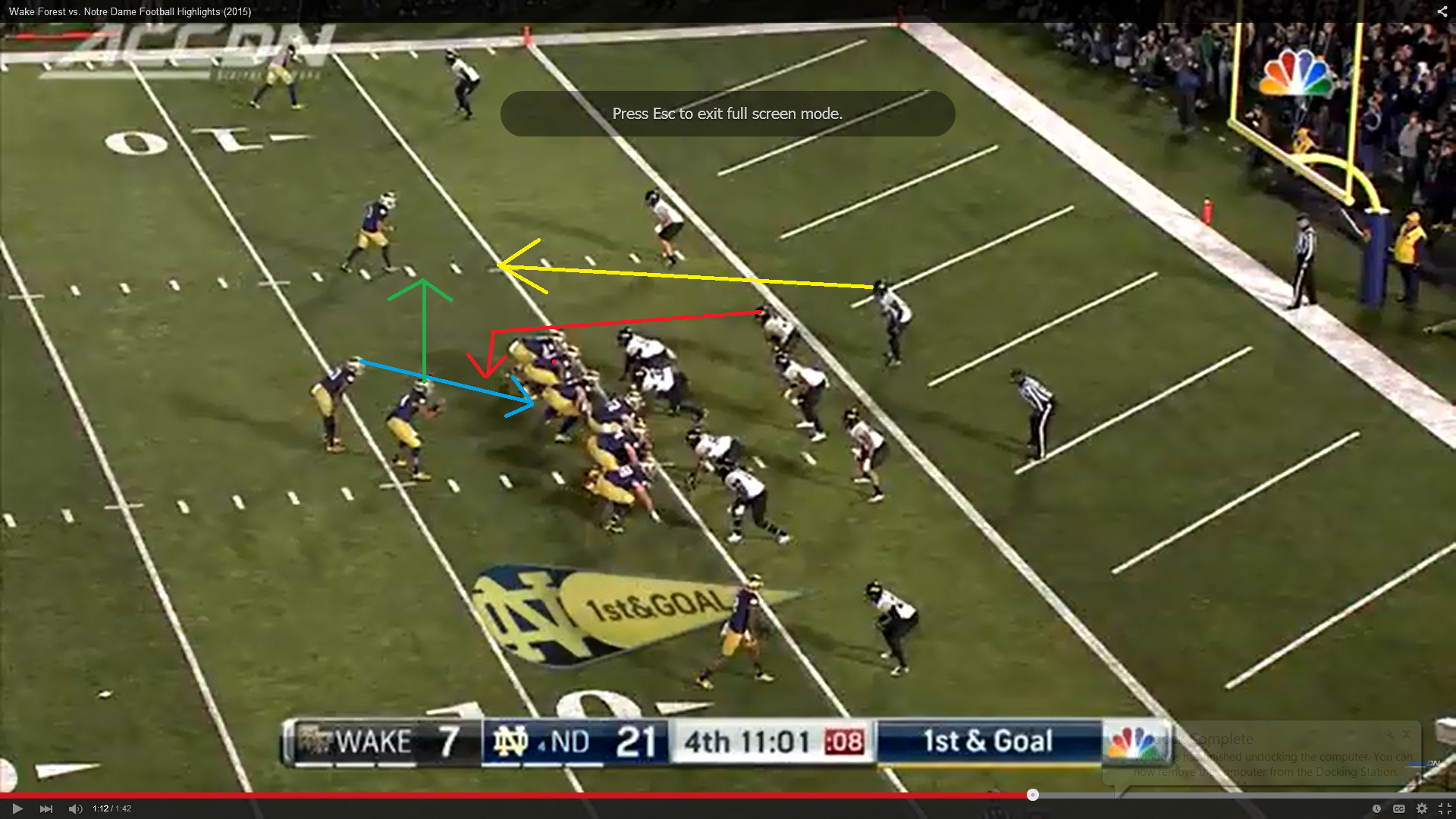 Wake Forest will counter with a pretty common way to defend the read option. The linebacker will attack the running back to the inside (red arrow) and the safety will attack the quarterback to the outside (yellow arrow). The Demon Deacons are in pretty good shape here and should have either option well defended. 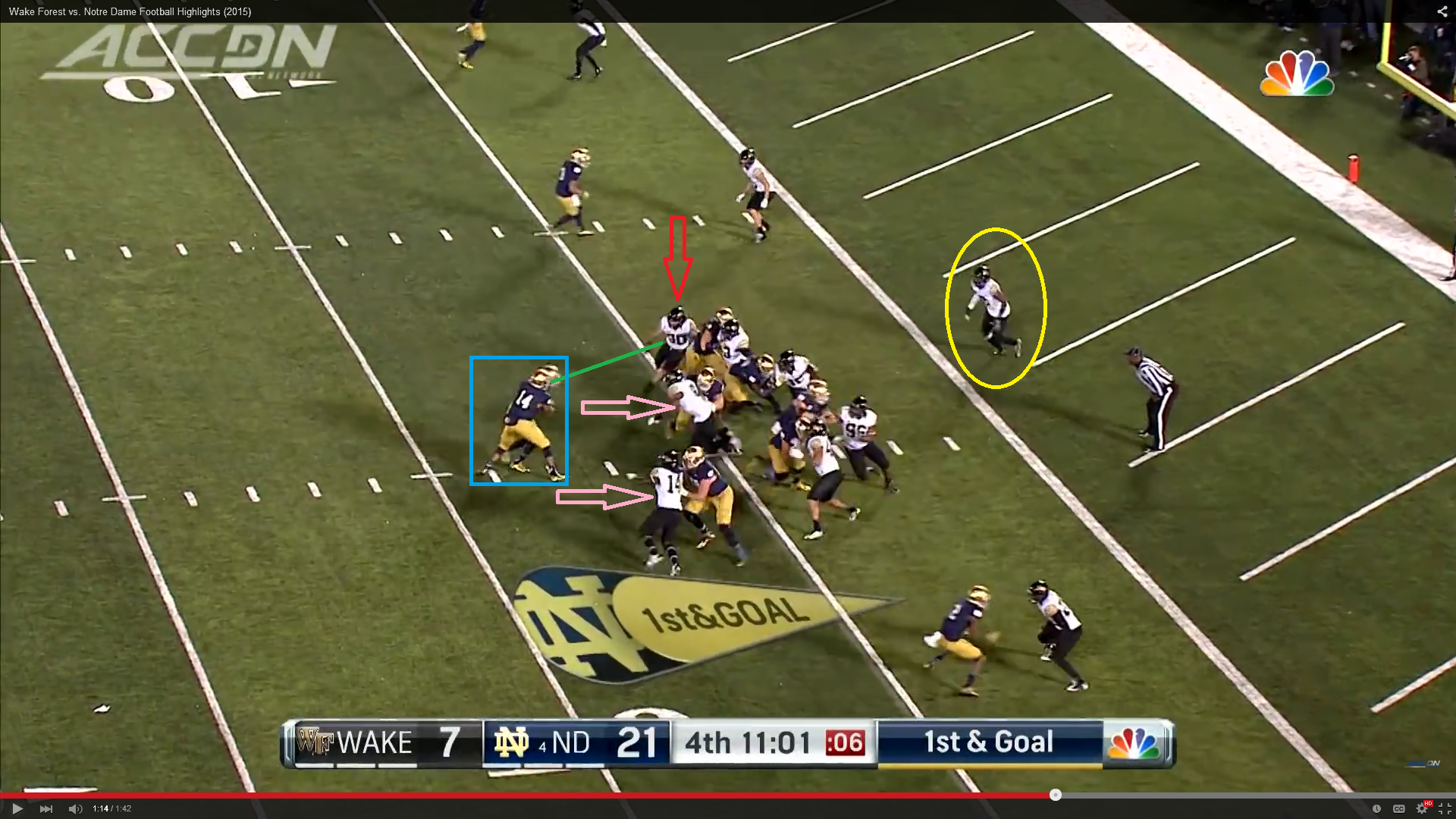 A fraction of a second after the snap, Kizer is moving with the running back as he reads the defense (blue box). Kizer can press the ball into his stomach (signaling a handoff) or he can pull the ball and keep it himself.

Kizer will read the first unblocked defender to the outside (red arrow). His eyes will either go to the defender's numbers or shoulders (green line). It should be noted, this is a general statement, every coach teaches the read a little bit different. The key point is, Kizer has to decide quickly if the defender is threatening the inside or outside run.

Wake Forest is still in good shape. If the play is run to the inside they have a linebacker (red arrow) and two other players (pink arrows) in the back field. If Kizer keeps to the outside, the safety (yellow circle) is in good position. 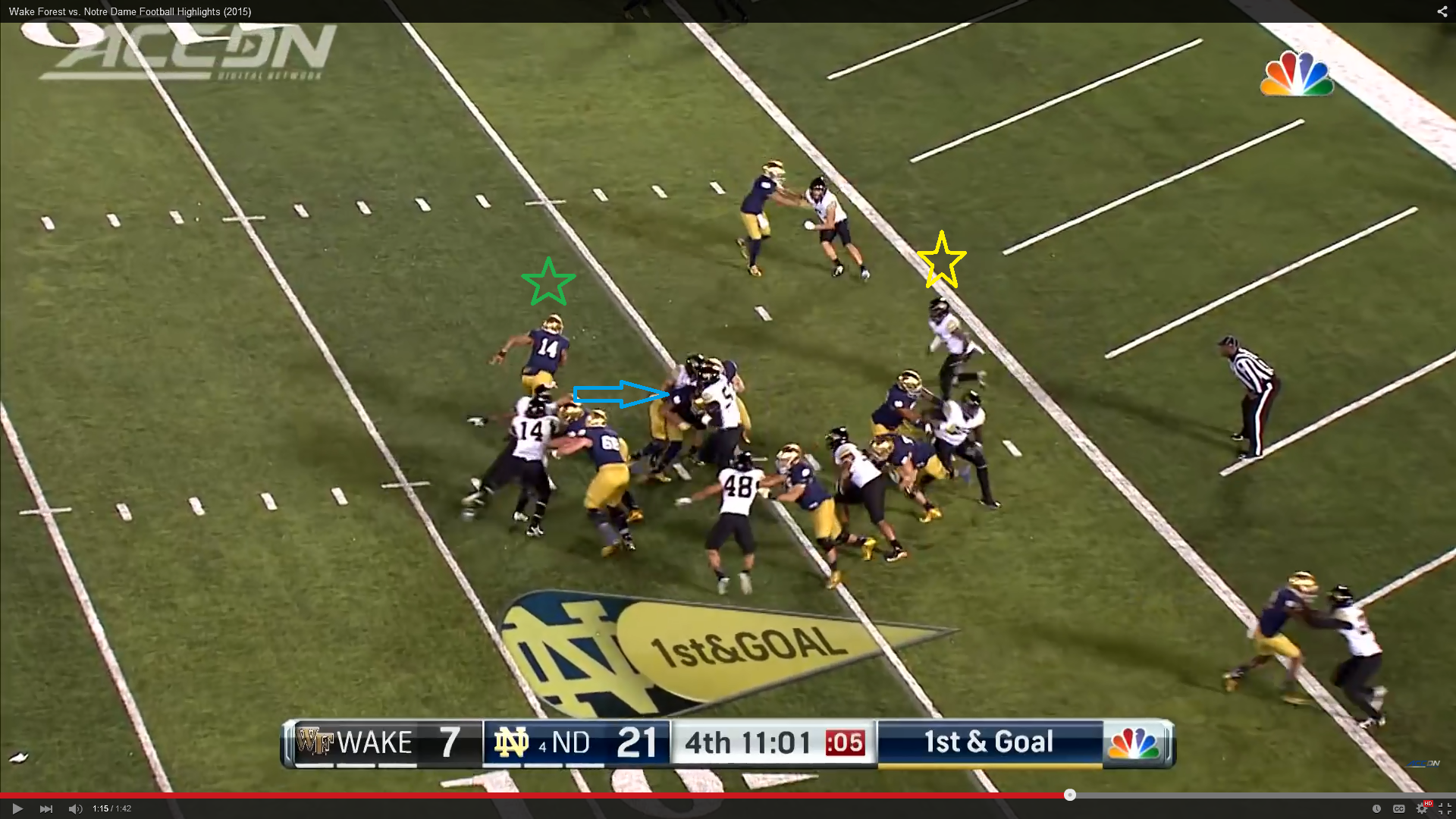 Kizer makes a good decision and keeps the ball. Josh Adams (blue arrow) is being mauled by the defense. Now it's Kizer, (green star) one on one with the safety (yellow star). As much as I love what Kizer has done this year, I'm not sure using speed to beat a safety to the edge is the best scenario for the Irish quarterback. 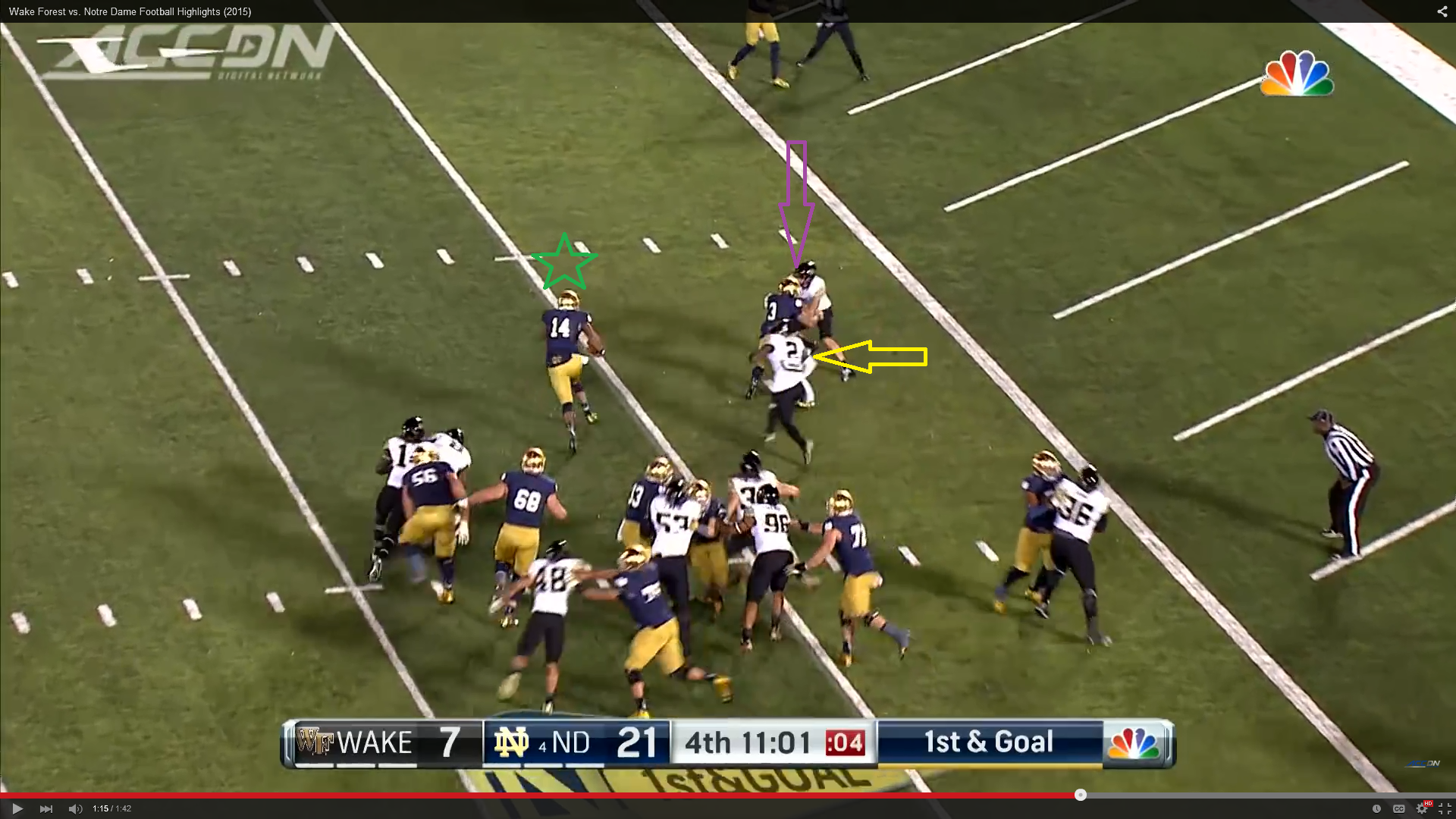 Well would you look at that, Kizer (green star) seems to be running away from the unblocked safety (yellow arrow). Amir Carlisle (# 3) is chipping in with some solid blocking on the edge (purple arrow). 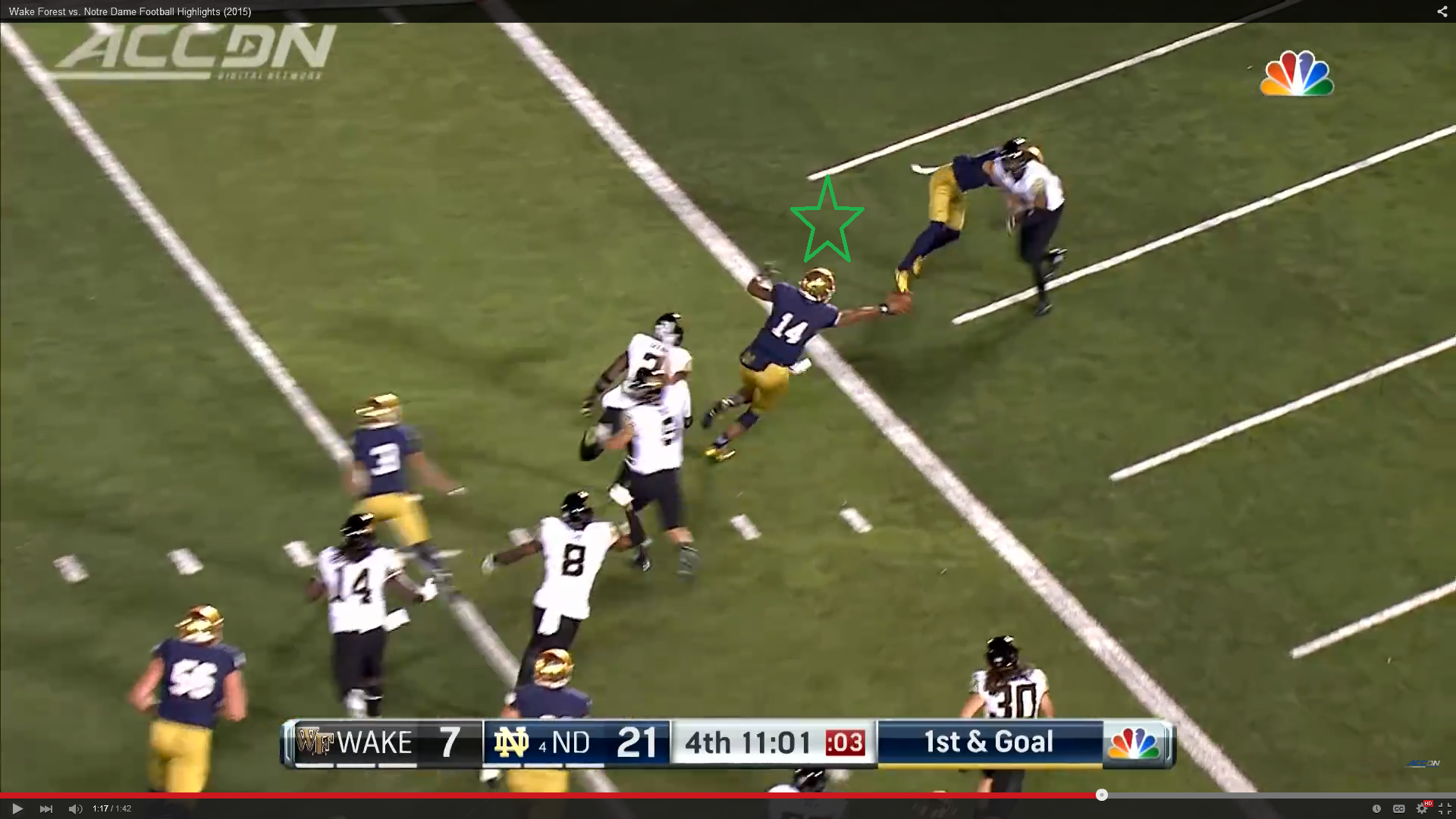 Nice wheels DeShone Kizer (green star)! Kizer simply beat the safety to the edge.  With speed. Not a typo.

Although the safety does take a couple of steps to the inside and the Carlisle block forces him to change his pursuit angle, Kizer does a pretty good job of winning the foot race. Enjoy.

You can see the difference a mobile quarterback makes in this situation. If the ball is handed off to the inside, the Irish get stuffed. As a bonus, even though Wake Forest defended the QB keep pretty well, DeShone Kizer simply beat his man. I was a little surprised to see that. But Kizer seems to be full of surprises this year.