This play isn't as bad as you think.

The message boards are on a witch hunt and they’ve found their witch. Over the past few weeks, the criticisms of last year’s MVP and 2015 captain Joe Schmidt have become increasingly loud. There’s no doubt that Schmidt hasn’t looked as good as he did last year. However, much of the criticism tends to be based on a relatively small sample size. Snapshots of single plays, isolated from the context of the defensive scheme.

I want to be clear, I am not singling out any one in the OFD community, this criticism exists across the Notre Dame universe and beyond.  One example that critics of Joe’s play have pointed to is a 37 yard run against Pitt last week. I happened to be breaking this play down as part of an article detailing problems in the secondary. When I read the criticisms of Schmidt on this play, I felt compelled to set the record straight. This was not a bad play on Joe Schmidt’s part. It would have been very difficult for him to make the tackle in this case. Let’s take a look at the film and I’ll show you what I mean: 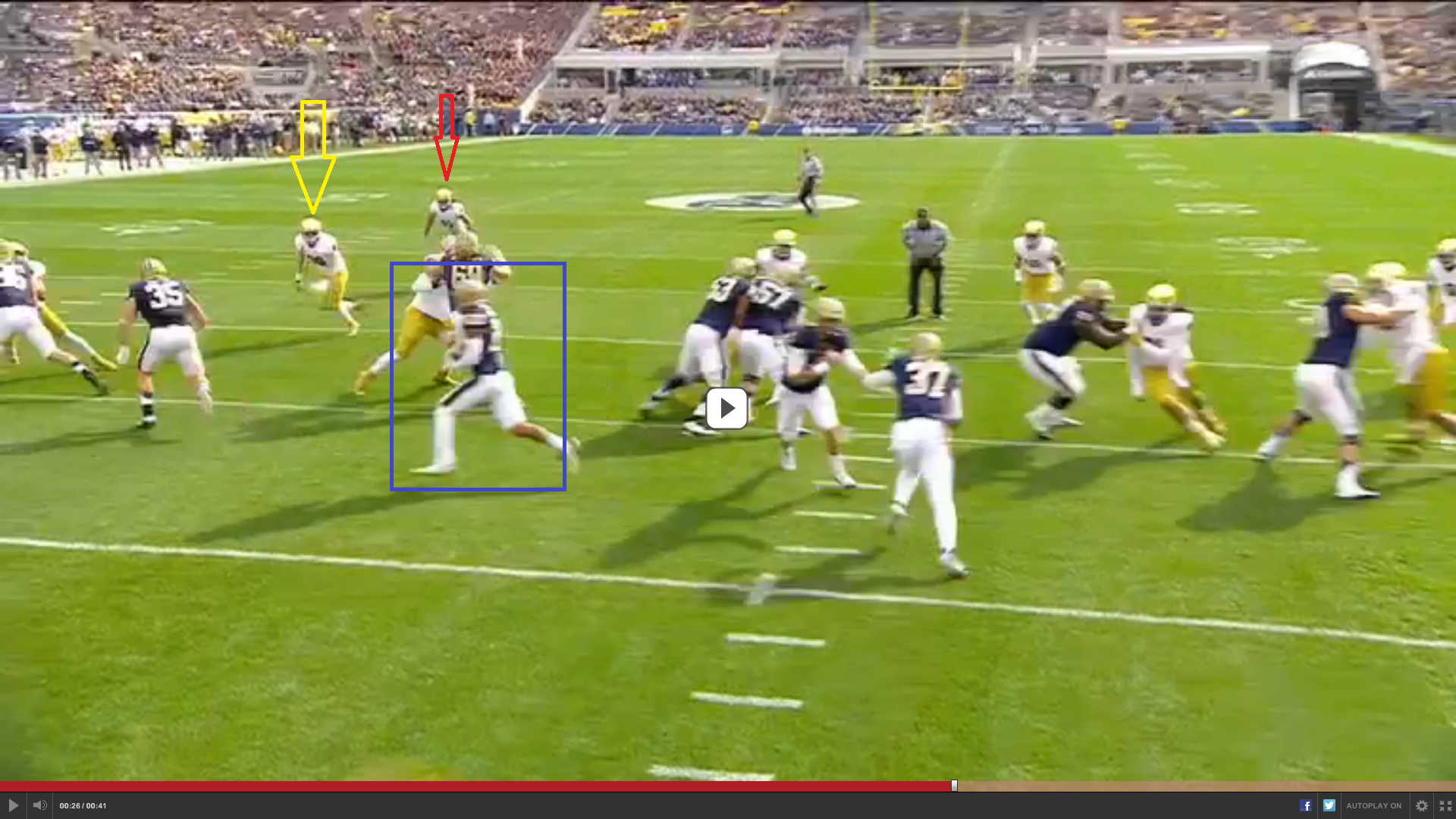 A fraction of a second after the snap. Tyler Boyd has the ball (blue box) and Schmidt is maneuvering into position (yellow arrow). Note the location of Mathias Farley (red arrow); he’ll be a free player if Schmidt takes on the blocker. 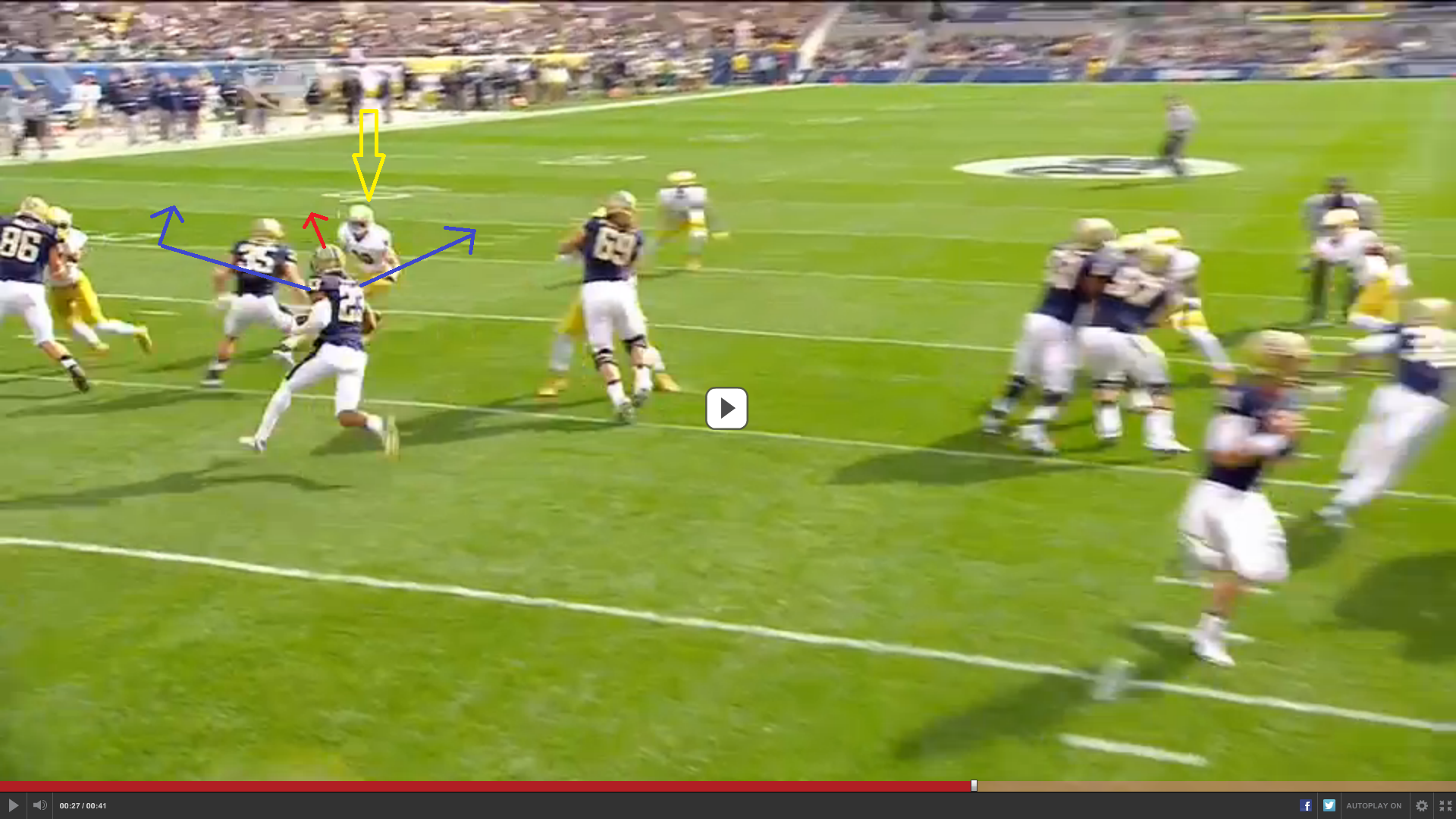 Here is the nuance that most people missed on the play. Let me preface my comments, by saying that I coached the fly offense for many years and this sweep play was the bread and butter of that offense. I’ve coached this exact play a million times. I can tell you there is no way Joe Schmidt should ever make the tackle in this situation.  If he does, it’s because the offense didn’t execute.

The first advantage the offense has in this scenario is the ball carrier gets a head start. At the snap of the ball, he’s moving at about 80% speed while the defense is close to stationary. That’s a big advantage.

The next advantage is that the ball carrier can go in two directions (blue arrows). This means that Joe Schmidt has to slow down and take the block on square so he can make a play to either side depending on where the ball carrier goes. When I coached, we drilled this exact situation all the time. Our ball carriers were taught to give a little fake in one direction to set up the block and then go the other direction. The blockers were taught that when the defender picked a side, they would just wall him off.

This is exactly what Boyd does, its subtle, but look at the way his shoulders are turned slightly to the inside and he is looking in that direction (red arrow). That is enough to get Schmidt to slow down and prepare for a potential inside cut. Take a look at his positioning here (yellow arrow), you can see he is slowing down and shading slightly to the inside. 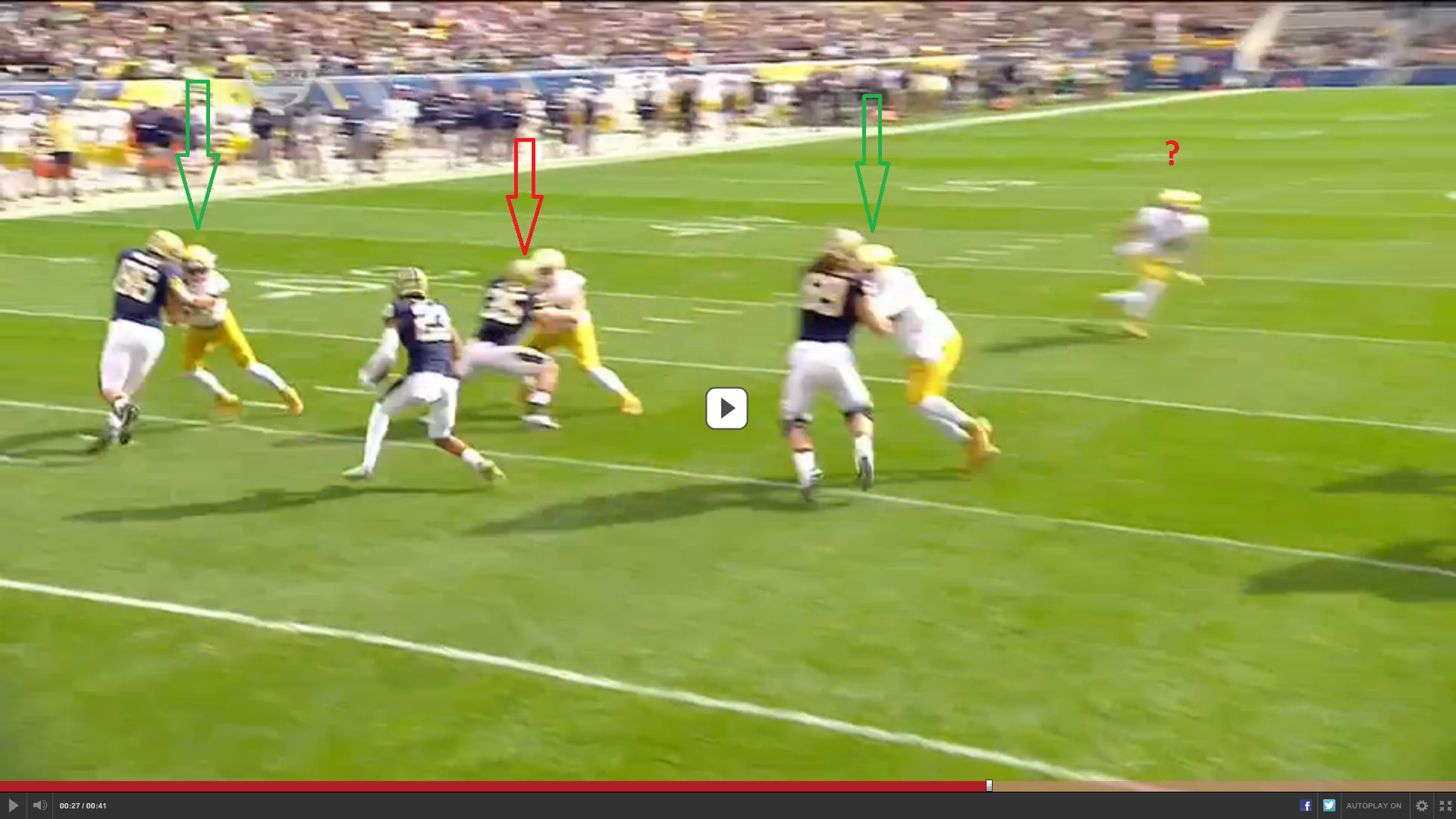 That slight hesitation allowed the fullback to get outside leverage (red arrow). It’s not a devastating block by any means, but since Boyd is almost at full speed and Joe is barely moving, even the slightest hesitation means that Schmidt won’t be able to disengage in time.

Schmidt has been the lightning rod for criticism on this play because he got blocked. But I would argue that he had the most difficult assignment in this situation. He had to defend two gaps. The other two players in this screen shot (green arrows), only had one gap to defend and they didn’t even come close to getting off their blocks.

Remember I pointed out Matthias Farley on the first screen shot? Because Schmidt took on the lead blocker, Farley was free to make a play. Unblocked. As mentioned in a previous article he makes a terrible read and completely abandons his responsibility. You can see him in the screen shot with the red question mark above his head moving in the wrong direction. However, few if any commented on Farley’s serious gaffe. Most of the criticism on this play has been directed at Joe Schmidt. This was an easy read for Farley and he was unblocked. He should have made the tackle.

As someone who coached this exact play many times, I can tell you, as long as it’s executed properly, Joe Schmidt should never make the tackle in this situation. 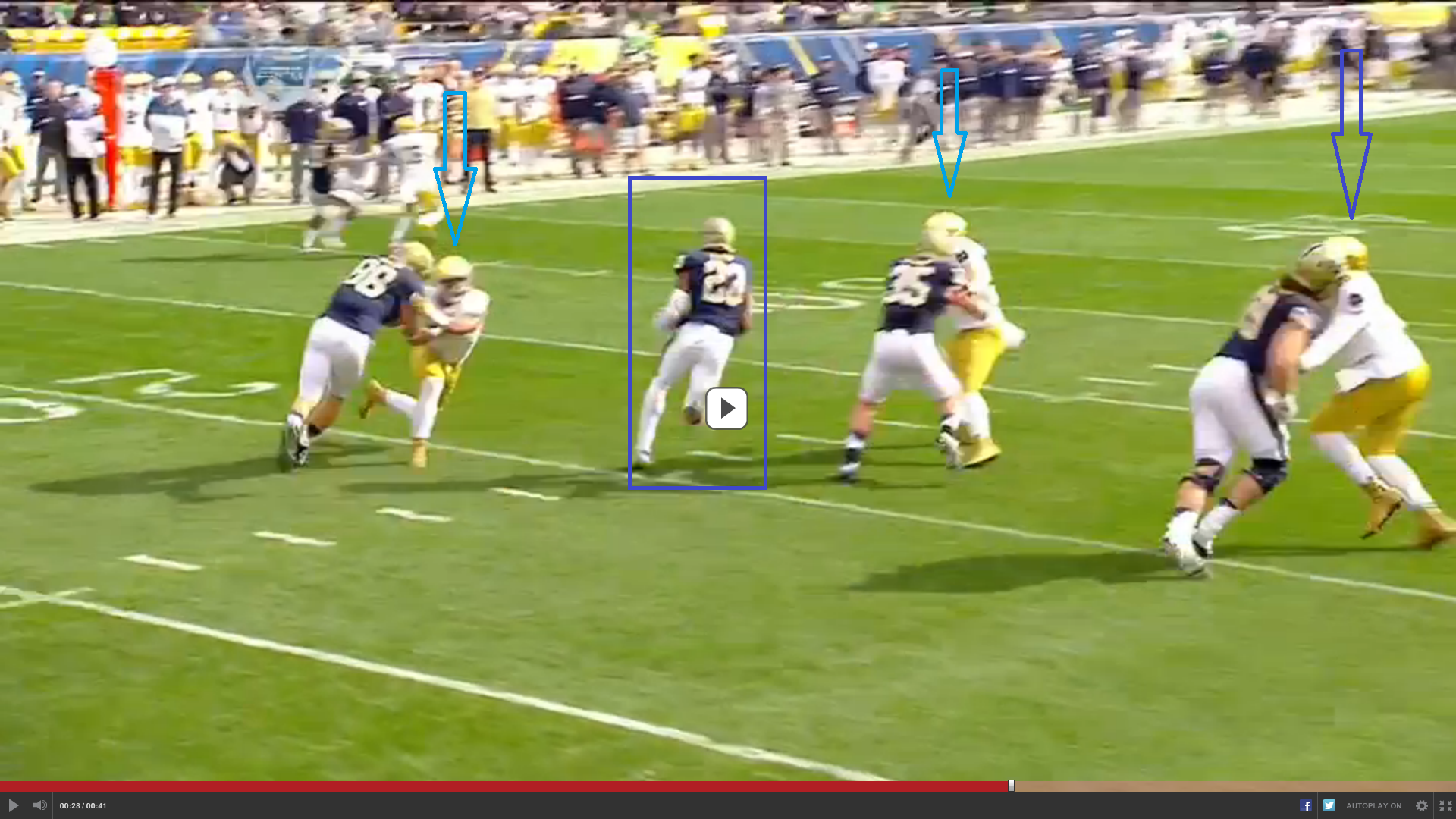 Boyd is about to run wild in the secondary (blue box) and no one is able to get off their block to make a tackle (blue arrows).

It’s fair to say that Joe Schmidt hasn’t been as good as last year. I admit, I haven’t stopped and re-watched Joe specifically this year, so take this with a grain of salt.  I think that Joe Schmidt is a step slower in 2015, but his performance hasn’t been as bad as people think. This play is a perfect example of that. While it would have been great if Schmidt made the tackle, the reality is, it was highly unlikely in this case. More importantly, in this instance there are a number of players that deserve criticism before Joe Schmidt.