Uh, yeah. This is not good.

Share All sharing options for: OFD Films: Chaos in the Notre Dame Secondary

I'm not going to spend too much time on the pre-amble this week because we've got a lot of film to review. The secondary is closing in on gong show territory. Let's take a look at the film and I'll show you what I mean. 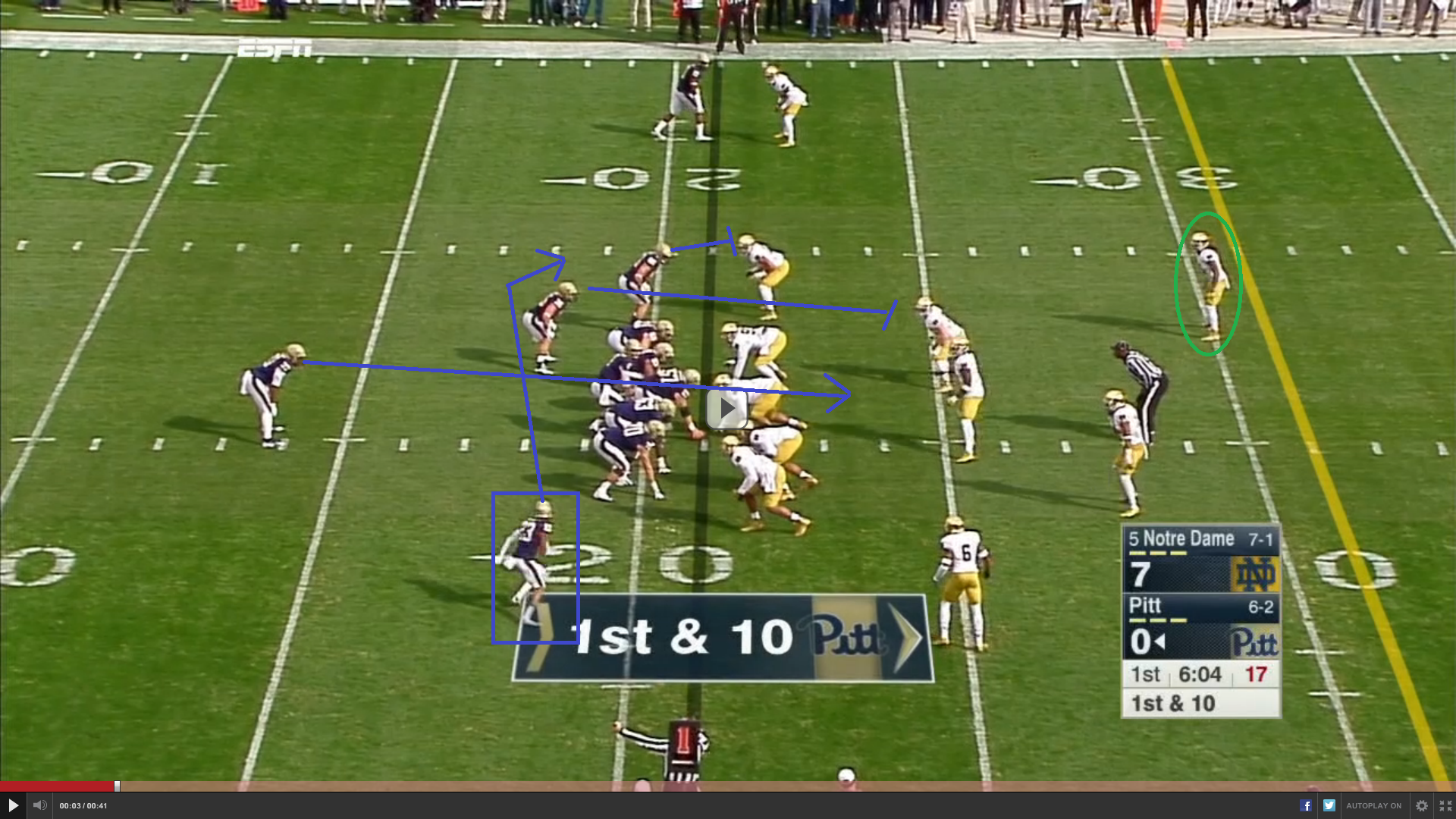 Pitt will run a sweep with Tyler Boyd (# 23, blue box). To hold the backside pursuit, they'll fake the ball to the running back (blue arrow). Mathias Farley (# 41, green circle), will be unblocked and should be in excellent position to make the tackle. 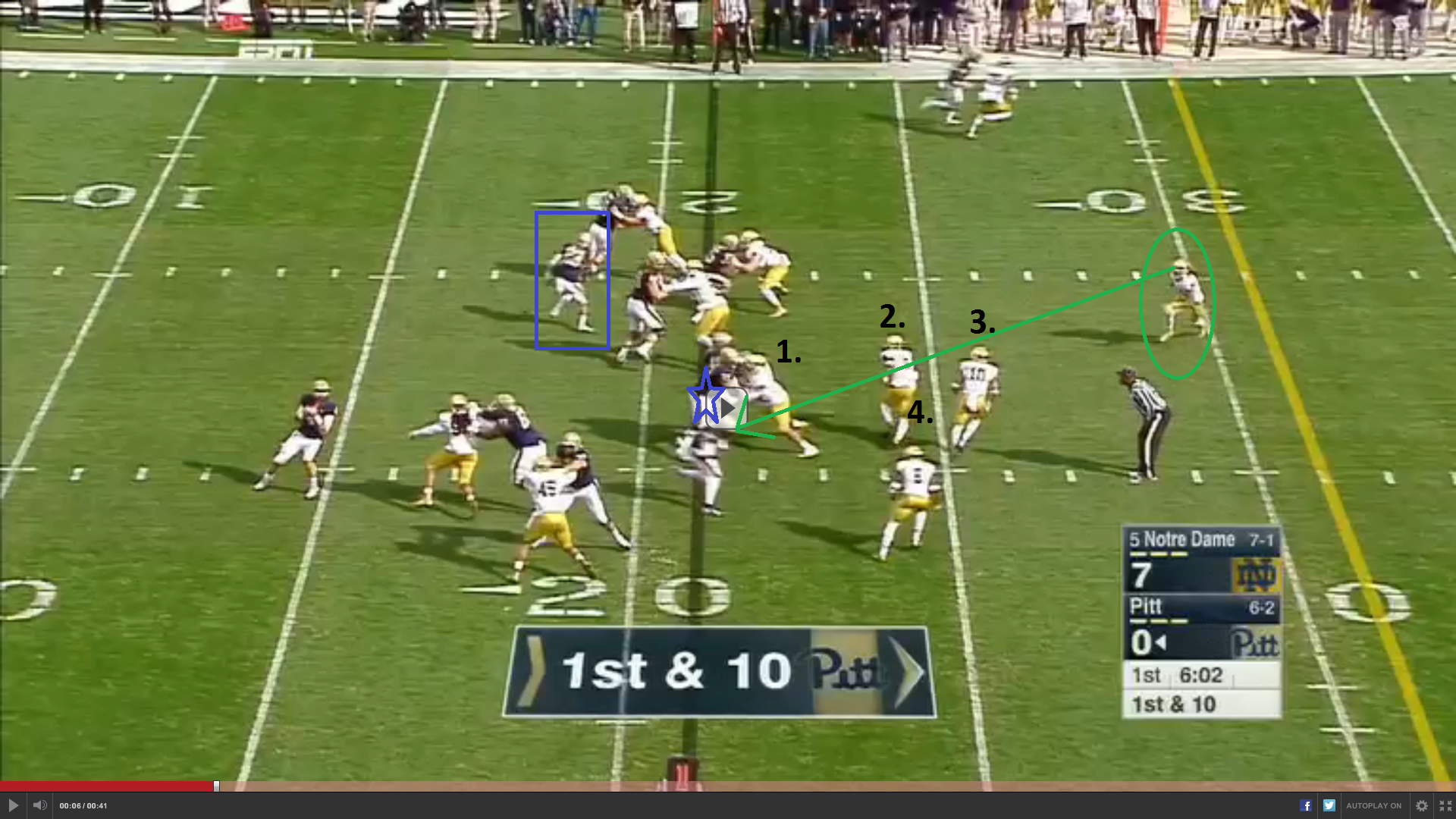 Boyd has the ball (blue box).  Pitt has the play pretty well blocked at the point of attack. But they don't have anyone to account for Farley (green circle).  This is an easy run read so Farley should be flying to the ball carrier.

Inexplicably, Farley completely ignores the obvious sweep read in front of him and decides to focus on the running back (blue star) on the other side of the formation (green arrow). This really wasn't necessary as Notre Dame had 4 players (numbered 1-4) that would have been in good position if the running back got the ball. 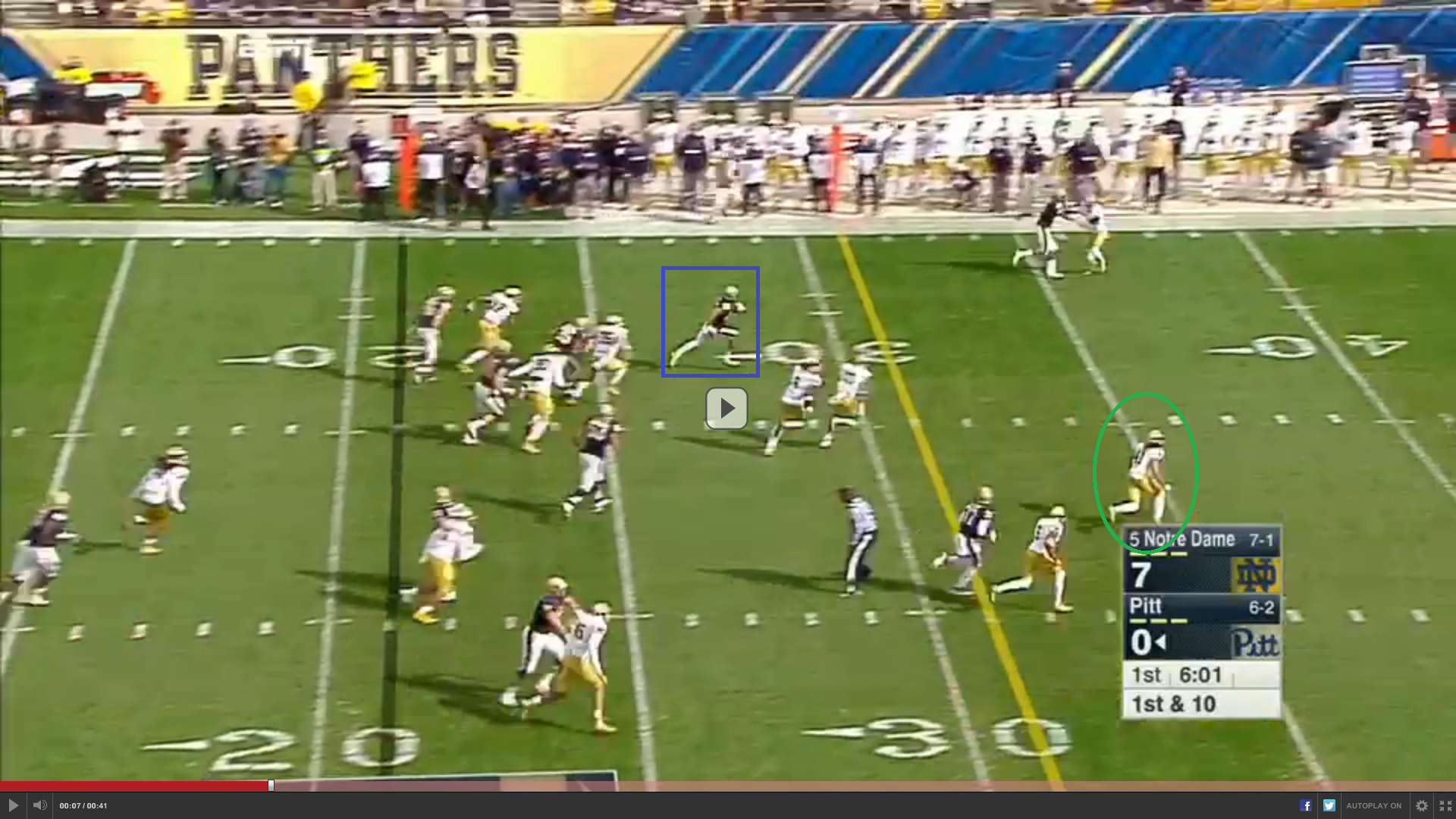 Boyd is off to the races (blue box). Farley is woefully out of position (green circle).

This is a bizarre play from a 5th year player. It was a simple read. Even if it wasn't, in this alignment Farley's job is not to try and make plays on the other side of the formation. He needs to take care of his side of the field first. If you are wondering why the Notre Dame defense has a tendency to give up big plays, here's a great example. This should have been a short gain.  Instead a mental error leads to a 37 yard gain. 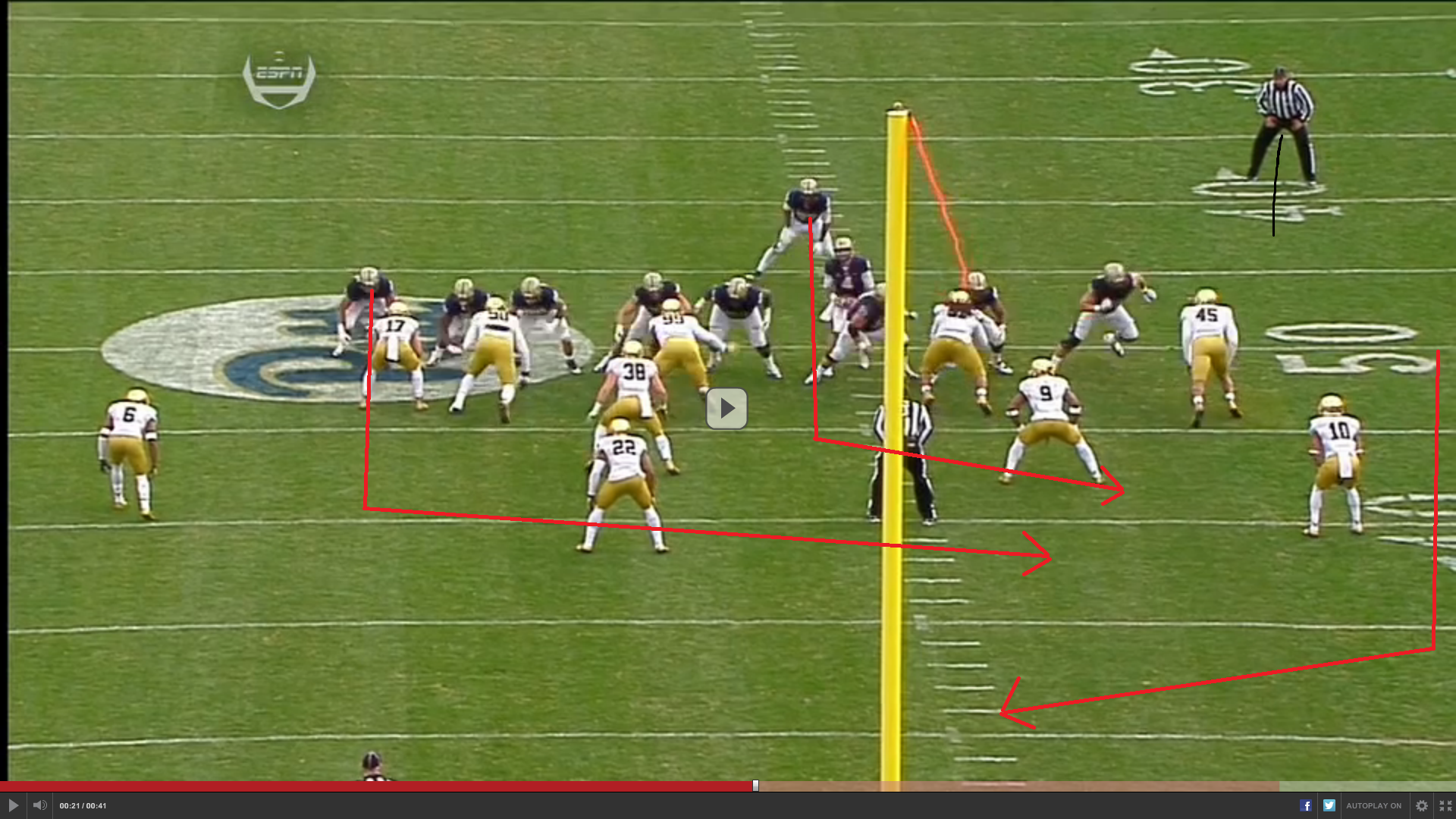 Pitt will release three receivers out of an unbalanced formation (red arrows, FYI one of the receivers is out of the screen shot). 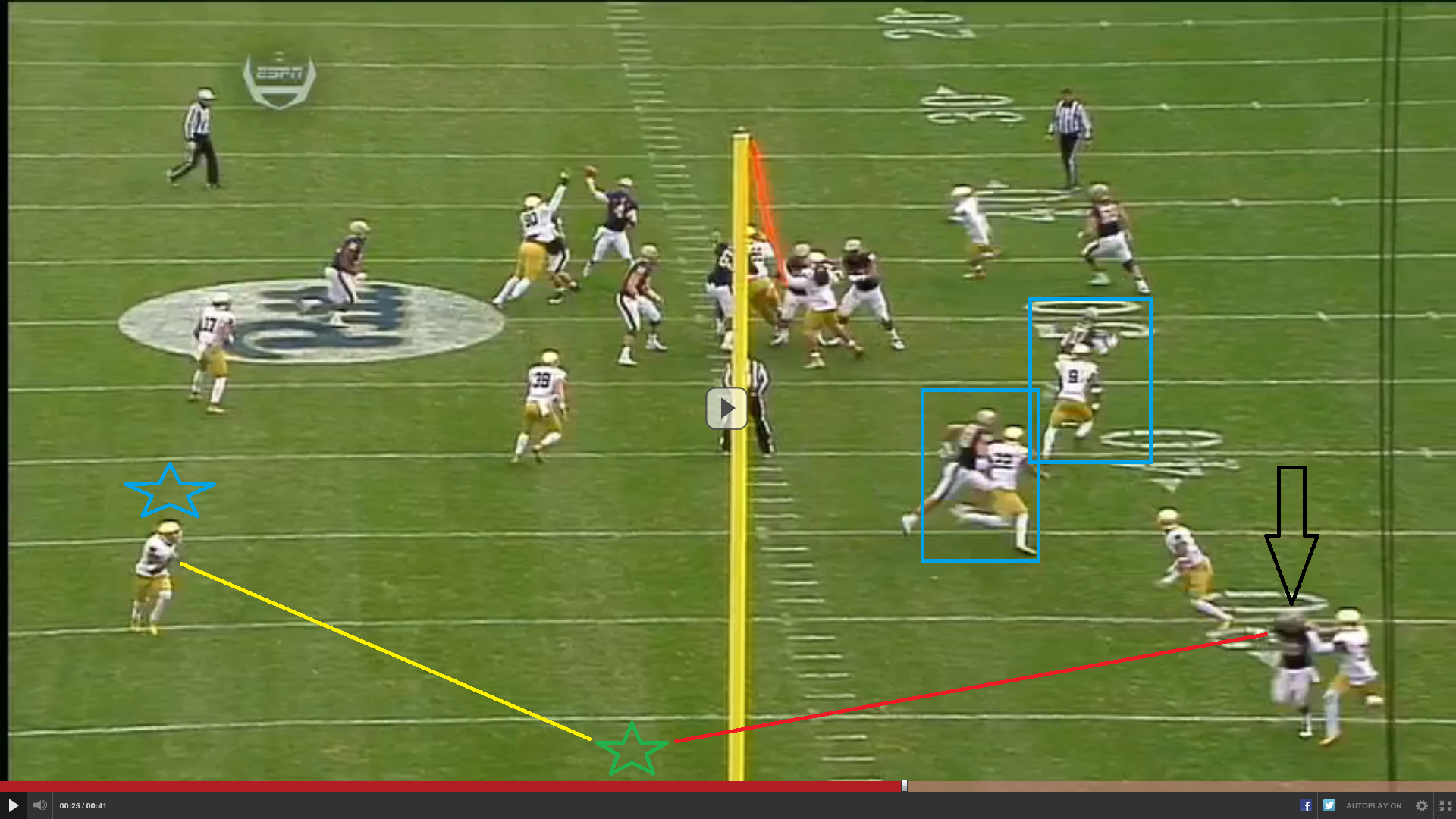 The two crossers going from left to right are well covered (blue boxes). KeiVarae Russell (blue star) lined up on the left of the defensive formation is in great position to make a play on the deep crossing pattern coming from the right side.

The ball is going to be caught roughly where the green star is. Russell has no receiver on his side so he is free to go and make a play. KVR actually appears to have a shorter path to the ball compared to the receiver (yellow line and red line) and the offensive player doesn't see him coming (black arrow). This is the kind of situation that elite corners absolutely love. 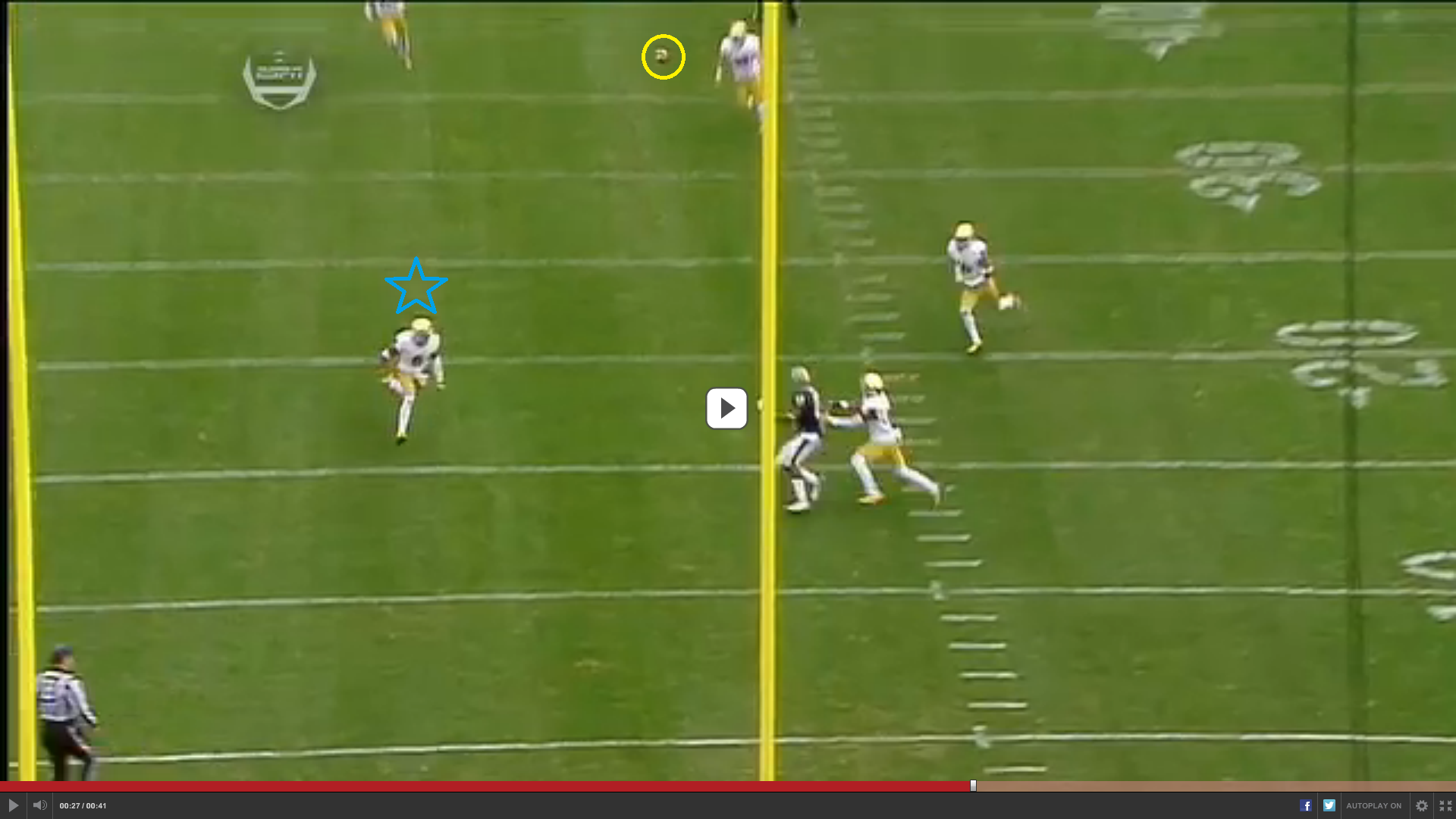 The ball is about to arrive (yellow circle).  Russell (blue star) can make a play on the ball or crush the receiver as he makes the catch. 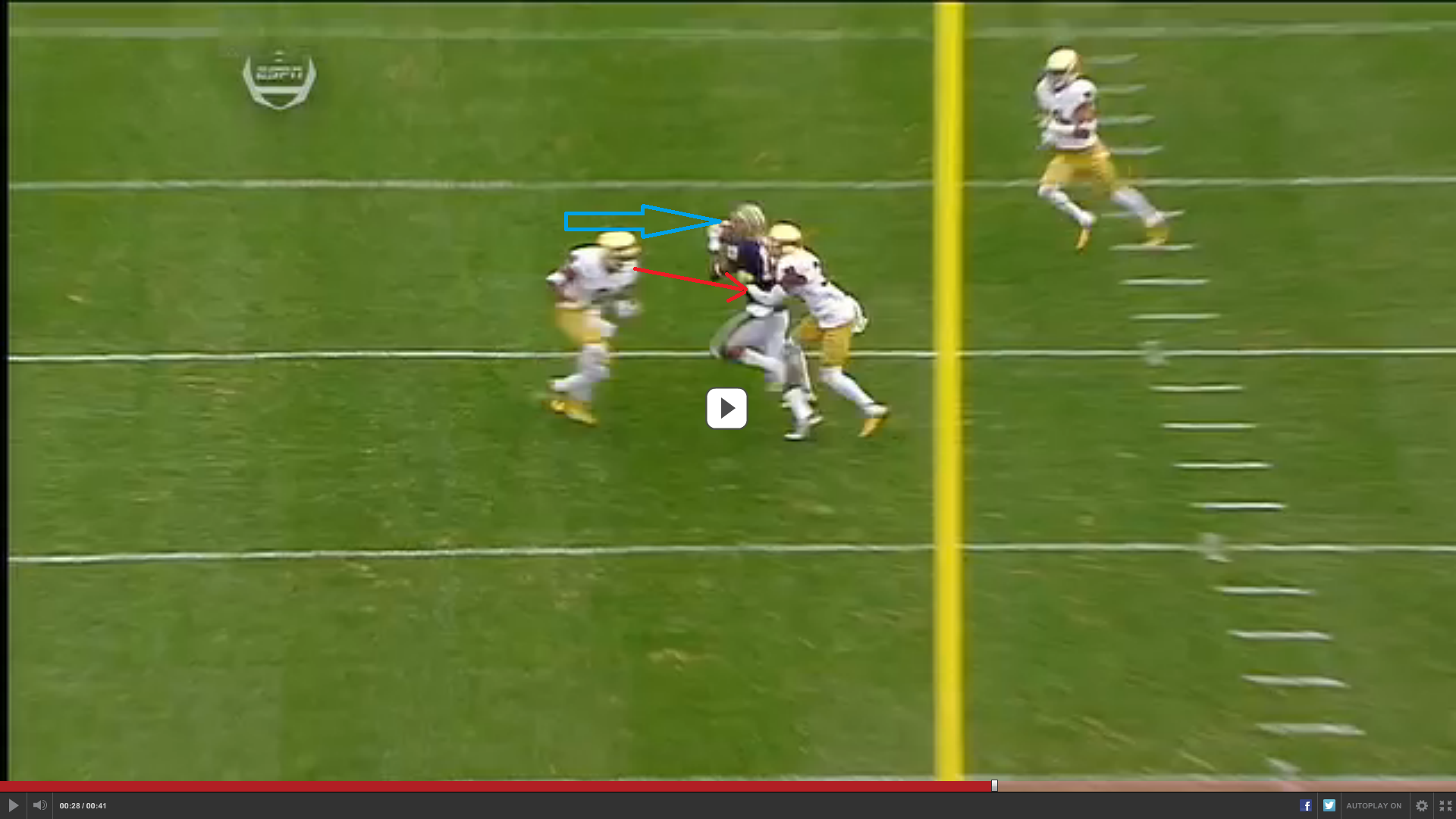 KVR decided to go for the hit instead of playing the ball. As you can see the receiver is just making the catch (blue arrow). Russell is in perfect position to deliver a huge blow. All he needs to do is put his shoulder pad into the receiver's mid-section (red arrow). 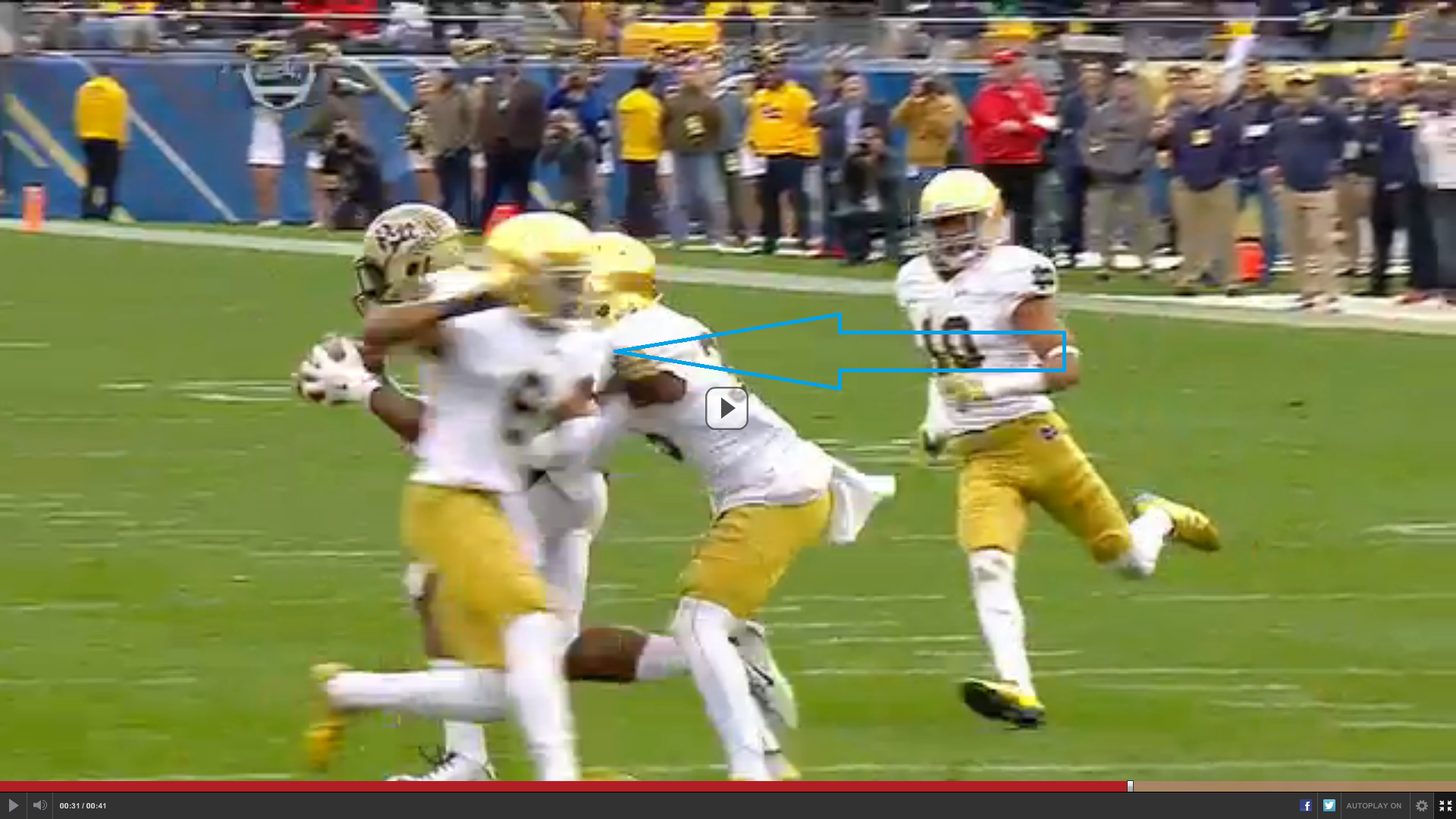 Instead of making contact, KVR pulls up and actually avoids the hit (blue arrow).

This should have been a big play for the Irish, instead it was a big play for Pitt. KVR was in perfect position, and he ended up doing absolutely nothing. I know what people are going to say, KVR was trying to avoid a targeting penalty or he didn't want to hit his teammate so he pulled up. I don't buy those explanations. Great players make big plays in key situations. This was a missed opportunity. 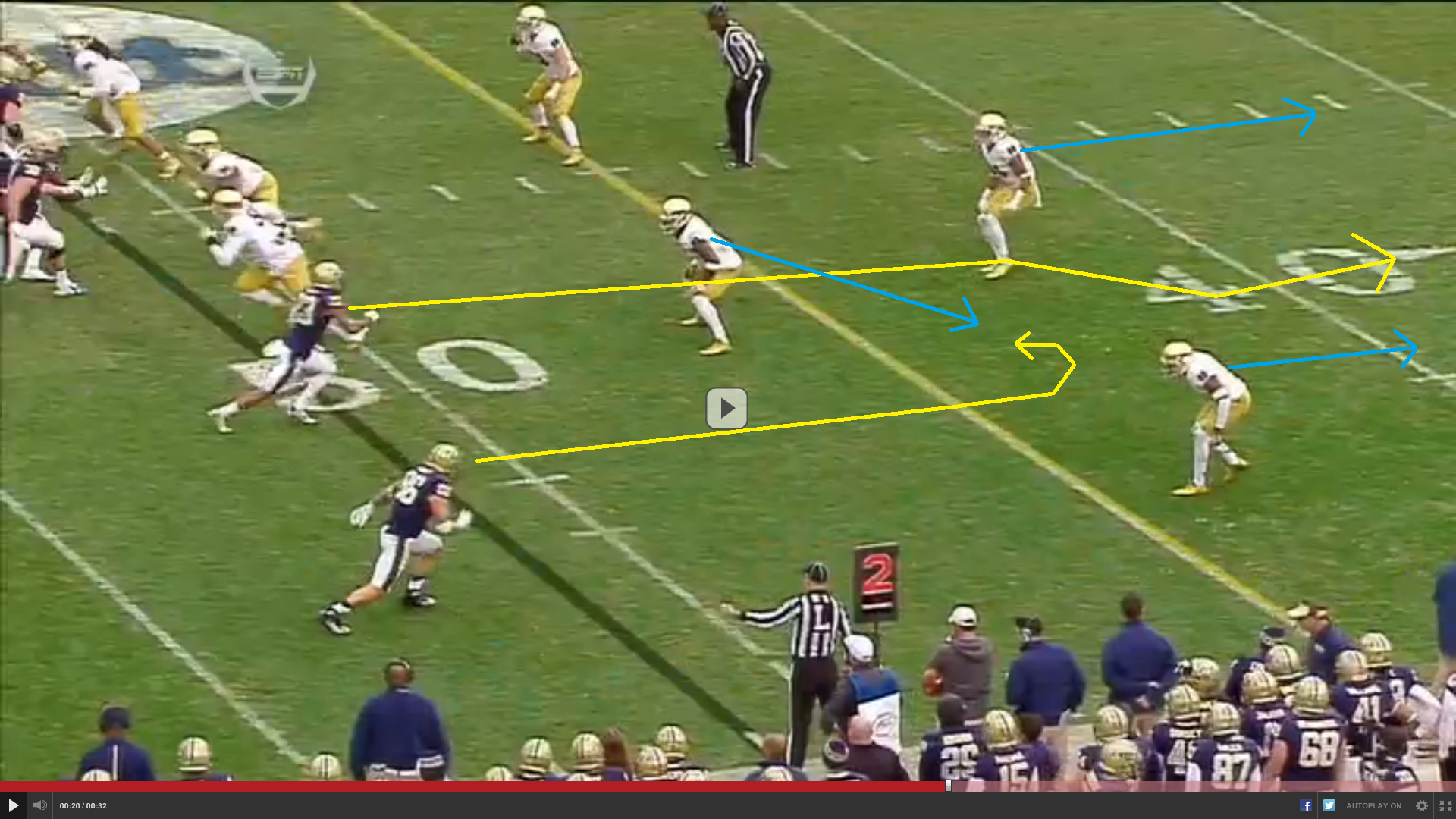 Late in the game, the Irish are protecting a lead. One rule: DON'T GIVE UP A BIG PLAY.

The proper technique on this play is for Russell and Redfield to play from depth and keep everything in front of them. 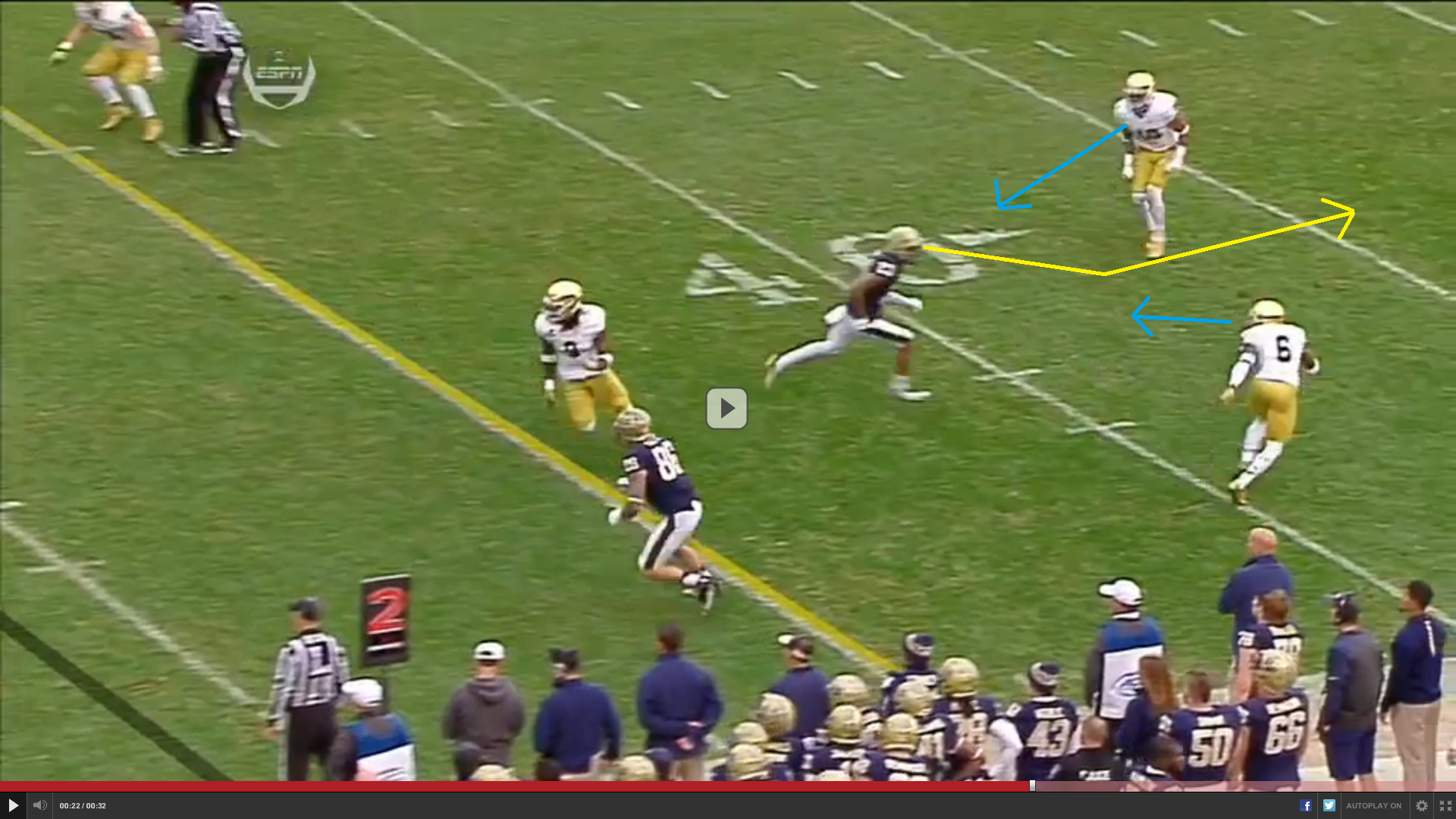 At this point Redfield and Russell are both focused on Boyd and in decent position (Redfield to the inside, Russell to the outside). I would like to see Russell a little deeper (roughly the same depth as Redfield), but he has his hips turned and is ready to run with the obvious deep pattern. 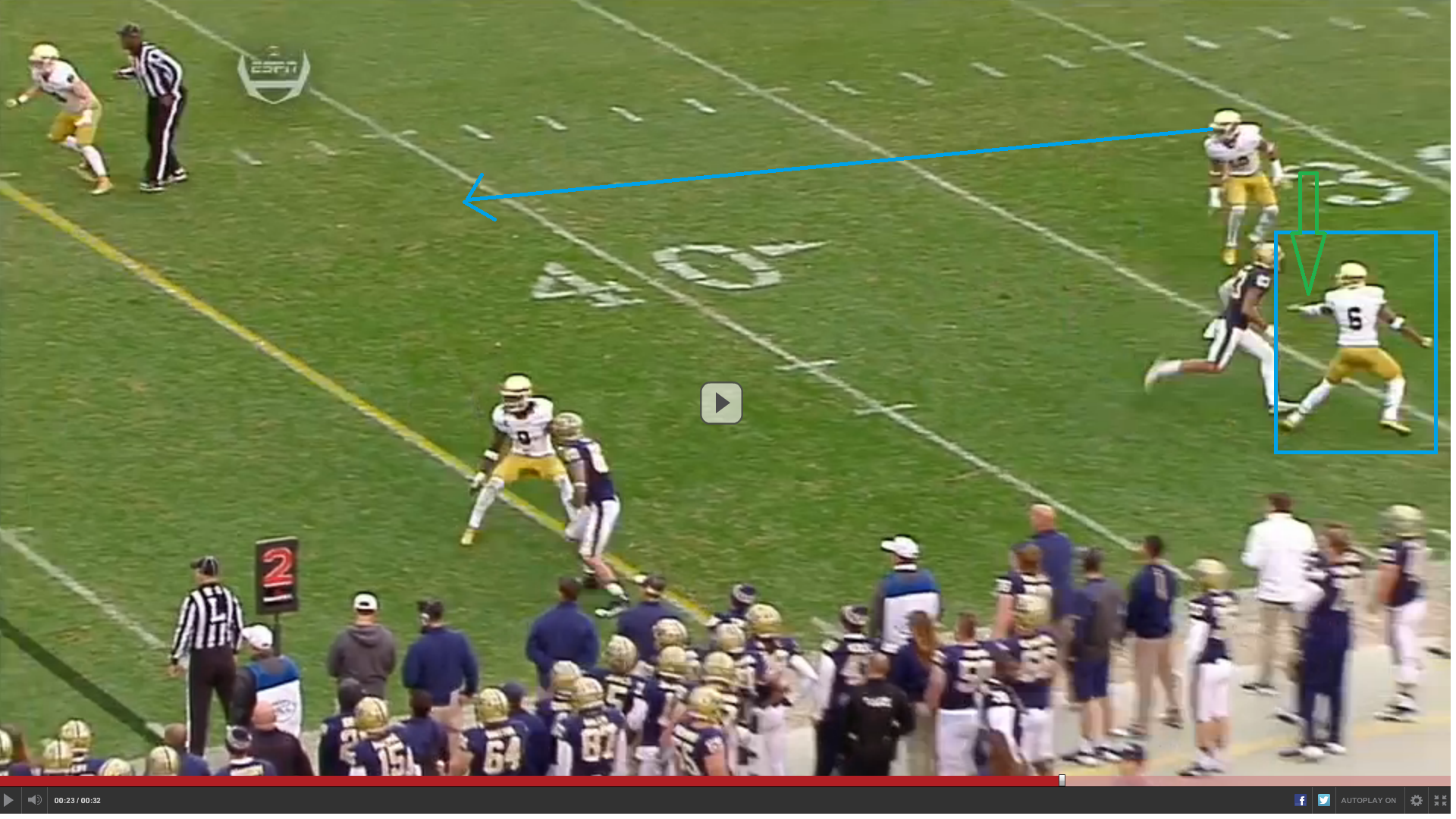 This is where the wheels start to fall off. Redfield has a squirrel moment. For some reason he decides to abandon his deep coverage responsibility and turn his attention to the backfield (blue arrow). Even worse he stops back pedaling.

KeiVarae Russell is in a bad spot as well (blue box). Instead of getting depth, he slows down and allows the receiver to get even with him. To compensate for this poor technique, KVR is going to try some sort of a WWE style arm bar on the receiver (green arrow). 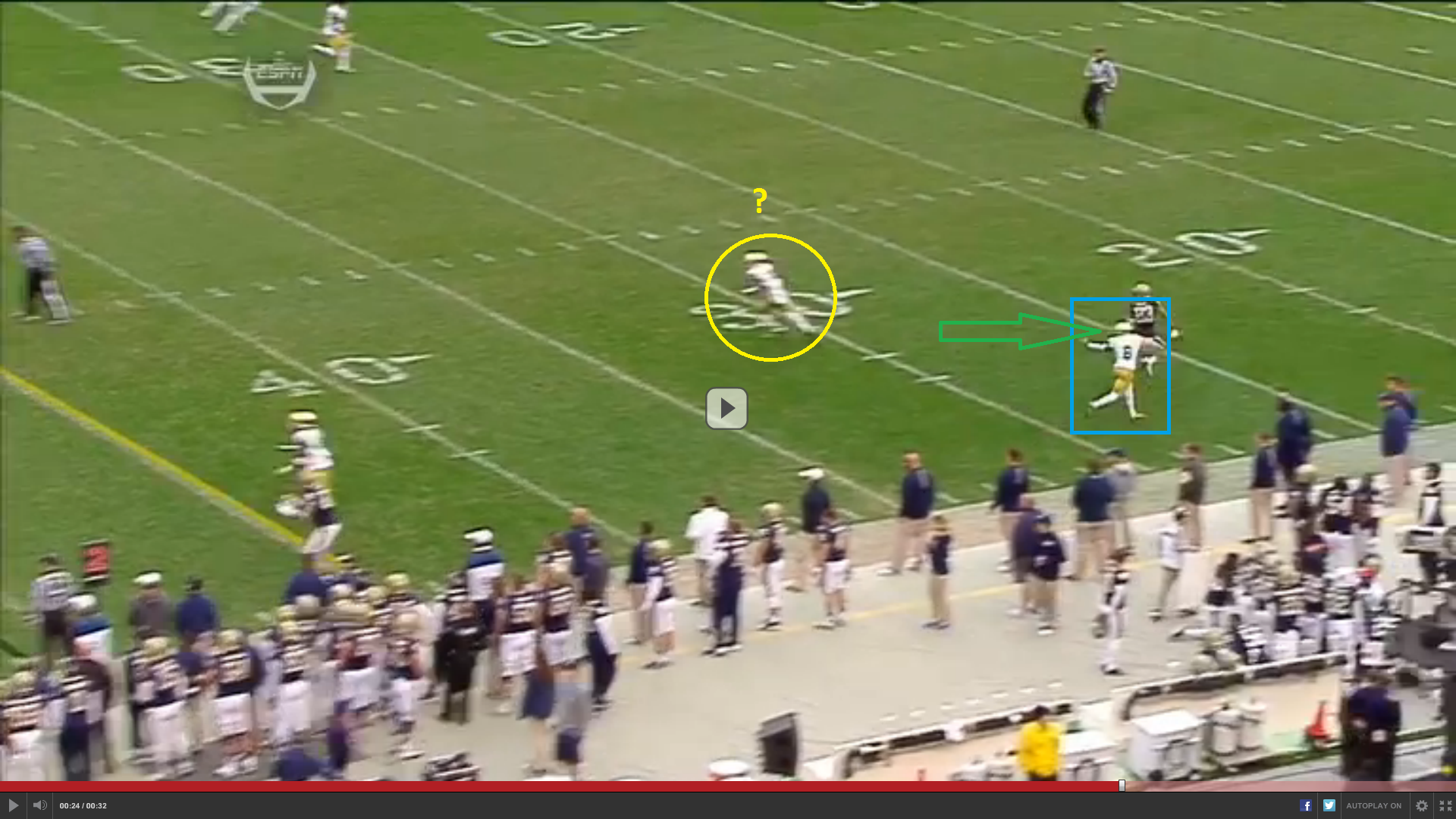 I have no idea why Max Redfield (yellow circle and question mark) would abandon his deep coverage responsibility on this play. No idea whatsoever. I simply don't have an explanation. Hence the question mark.

KVR is in my opinion, even worse (blue box). When he sees Boyd blow by him, he doesn't try and chase. Instead, he turns and starts pointing at Redfield (green arrow). I don't think I've ever seen that from a player. Are you kidding me?

There's no question Redfield screwed up. He should have stayed deep. But Russell should have been deep as well. More importantly, when he sees that Redfield is gone and the best receiver on the other team is running free, KVR should be putting his head down and sprinting to try and make a play. At least make an effort. Instead, he decides to literally point the finger at a teammate mid-play. Wow. 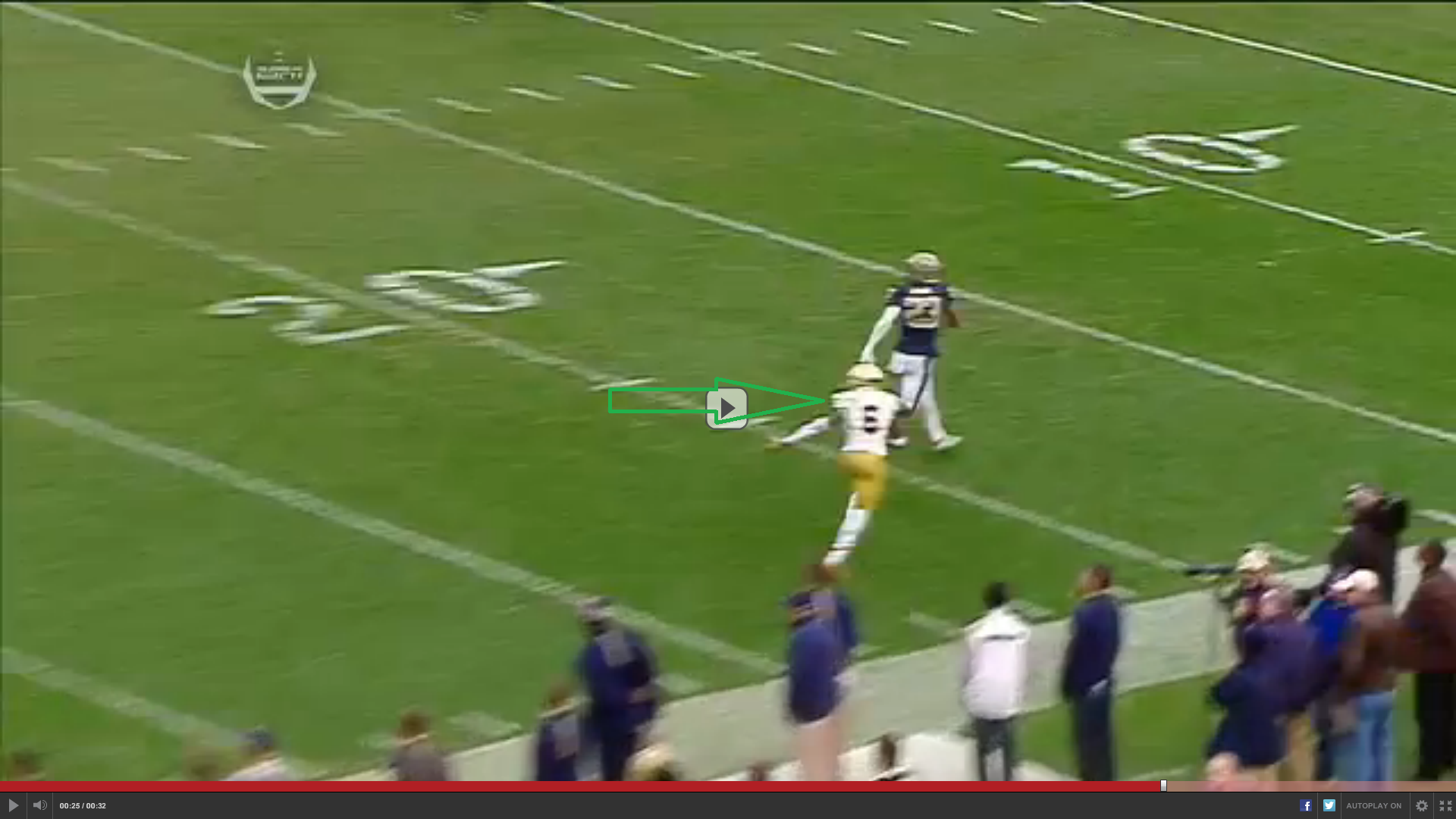 You want to know why the Notre Dame defense has been giving up big plays? The primary culprit has been a secondary that has too many mental errors and hasn't lived up to their potential. The plays featured here aren't the result of a scheme that's too complex or a former walk-on at middle linebacker. They are the result of errors from players that should know better.