For the first time ever, One Foot Down studies the past three decades to see how our little blog has helped Notre Dame to succeed on the gridiron.

Share All sharing options for: Meta-Analysis: Is the OFD Staff Truly ELITE?

At the halfway point of the 2015 Notre Dame football season, thousands of gallons of virtual ink have been spilt on the pages of this blog. The writers and commenters have picked apart virtually every imaginable facet of the program--everything from scraping linebackers and punt formations to recruiting and stadium upgrades. However, with a little time for introspection, we have realized that we, the staff of One Foot Down, must also hold ourselves to the same lofty standards that we so often enjoin upon the young men who don the Blue and Gold every Saturday in the fall.

And so it is that we present for the very first time...THE ONE FOOT DOWN STAFF'S CHART OF ATTENDANCE ELITE-NESS (OR LACK THEREOF)! Yes, folks, we've compiled a comprehensive chart of the wins and losses (and ties) of all Notre Dame football games that members of the OFD staff have attended. Let it never be said that we are a bunch of armchair quarterbacks who have no effect on the performance of the football team! (Though judging by our staff record in some stretches, perhaps that isn't necessarily a good thing...)

Ready for some #analysis? So are we! (And feel free to add your own insights in the comments!)

UPDATE: One of our pals over at HLS had already compiled a staggeringly exhaustive statistical analysis of all Notre Dame coaches, so now you can avoid bumbling through each coach's record year-by-year on Google like I did. 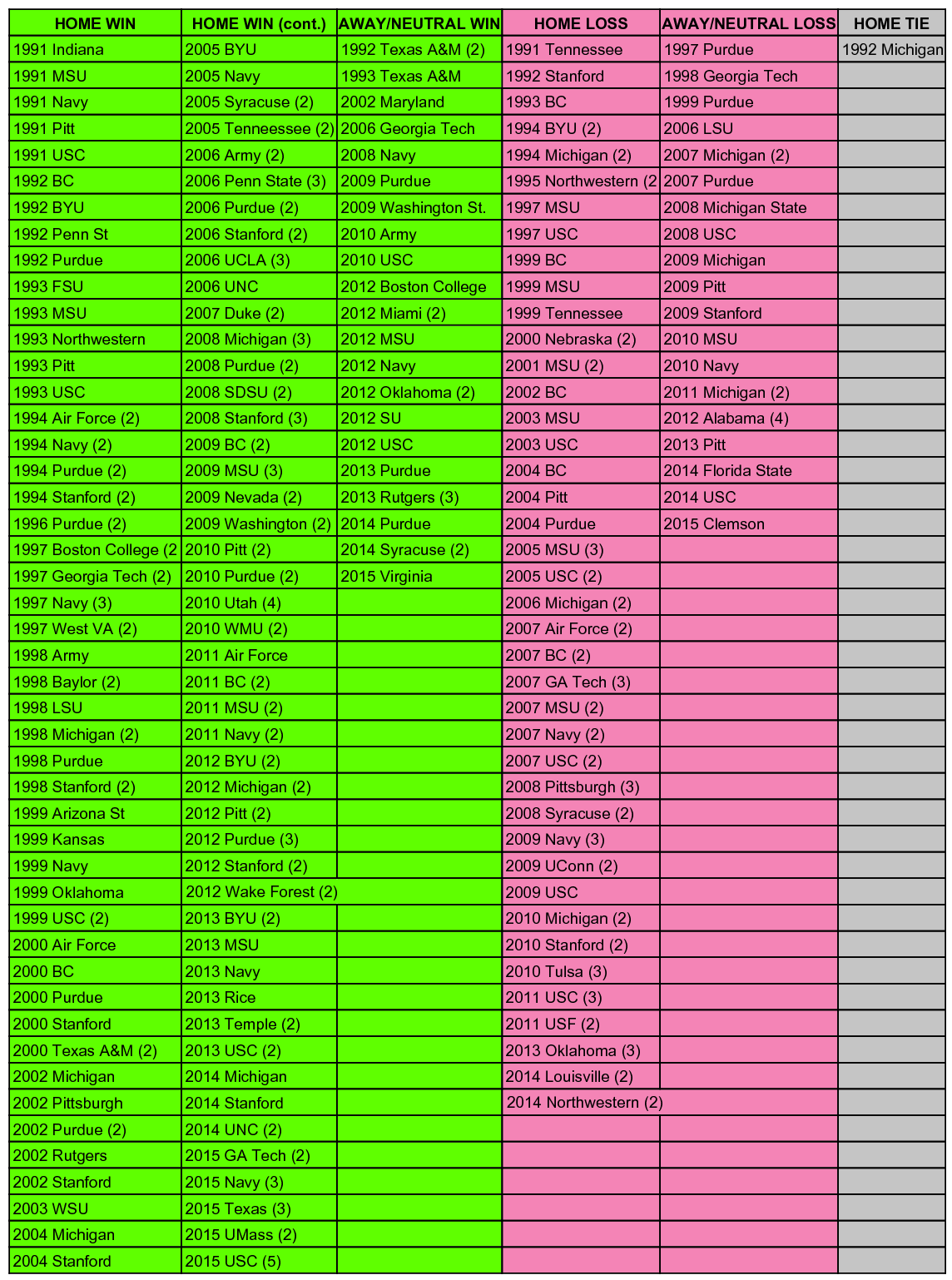 We could give you all the juicy stats up front, but where's the fun in that? Instead, we're gonna do this the proper way: by going through each coaching era. Hold onto your butts.

Lou Holtz was one of the most successful coaches in recent Notre Dame history, with a sparkling record of 100-30-2 (.765). But how does he stack up against the OFD-attended games during his tenure?

In a shocking result, the OFD staff actually performed better than Coach Holtz during his tenure! The OFD home record left a touch to be desired (and the inclusion of a tie against 1992 Michigan complicated things a bit), but an unblemished (albeit paltry) road record helped the staff squeak by ol' Lou by a mere three-thousandths of a point. So far, so good!

Haha, good old Bob Davie. All I'm going to say is that the staff's record should easily surpass Coach Davie's...but let's go ahead and crunch the numbers just to be sure, shall we?

//looks at overall winning percentage
...that's what you call a sigh of relief, folks.

Moving through the Davieweisingham Era, we come to Notre Dame's "Return to Glory." *snicker* Let us pray that our record will be slightly better than the Davie debacle.

The staff was surprisingly close to Golf Coach Ty, though it looks like we owe quite a bit to the lone road win against 2002 Maryland, eh?

Alright ladies and germs, now we're getting to the fun part. Up to this point, the old codgers elder statesmen and stateswoman of the staff have been shouldering the load; from here on out, the younger majority of the staff gets to join in the fun. And what fun it was! After Coach Weis defeated USC in 2005, the sky was the lim--

...I've just been informed that we did not, in fact, win that game in 2005. (Even though my research shows that USC didn't win any games in 2005--weird!) Oh, what could've been...well, let's relive the slide from Brady Quinn to Jimmy Clausen and the losingest senior class in Notre Dame history yayyyyyy

Well, thanks to most of our staff being in the student body during these dreary years, the respective home records are identical. The road games...not so much. Closer analysis reveals that most of these road losses came against rivals USC, MSU, and Michigan; toss in a crushing Sugar Bowl loss in 2006, and the staff limps to the Weis-era finish line barely above .500.

With the lean, miserable post-Holtz years behind us, we now turn to the most recent period of Notre Dame football--one that has truly vaulted Notre Dame back into the national championship discussion. This period has also seen an unprecedented rise in the OFD staff's attendance at road games, since many of our members have graduated and become young alumni with lots of money no social lives a passion for traveling with our boys in Blue and Gold. Let's see how we've fared against CBK over the last five years!

Quite possibly the most promising set of results in the whole bunch. Although the student-rich staff's home record is identical to Coach Kelly's, staff members have attended more road games (22) during the Brian Kelly era than they did during the previous two decades combined (18)! And to top it all off, the team apparently has a better overall chance of winning when one of us shows up to cheer them on. Huzzah!

The Final Tally and Conclusions

After beginning with 1991 Tennessee and counting up to this year's victory over USC, the records stand as such:

Now now, don't break out the torches and pitchforks just yet! At first glance, it may seem like OFD attendees bring bad luck upon the Fighting Irish. Sed contra, recent data indicates that within the last five years, Notre Dame football has fared equally or substantially better than average when OFD staffers attend. Furthermore, one can legitimately argue that the OFD records were skewed by circumstances beyond their control--i.e., faithfully attending each home game in 2007 gives one a 1-6 mark, while Weis goes 2-3 on the road.

Finally, this is only one way of approaching the data presented here. A serious researcher willing to make a generous donation to the One Foot Down offshore account in the Caymans devote hours of personal time would sift through each staff member's individual wins and losses, as well as calculate each coach's record in the games that OFD staffers did not attend. Oy vey, it's enough to give a man a headache, I tell ya.

So there you have it, folks--some hard-hitting, self-effacing #analysis for you to chew on and use as an excuse to critique some obscure math equation I goofed up. Seriously though, feel free to share your own personal win/loss records in the comments. Who knows, maybe someone can toss together a Google Doc to compile the Commentariat's records as well!