The Irish just secured a victory over the Trojans worthy of being penned by Virgil himself.

In a time not so long ago, in a Stadium not so far away...there was a team called NOTRE DAME that loved to play football and wore shiny helmets while doing so. However, the evil USC TROJANS, led by the Emperor PETE CARROLL, destroyed the Irish in annual battles in the frozen turf of South Bend and the sunny skies of Southern California.

Desperate for help, and frustrated with Notre Dame's scarce success against USC, the Fighting Irish turned to BRIAN KELLY for aid. Under his guidance, and with the leadership of DESHONE KIZER, WILL FULLER, and TERRY JILLERY, the Irish managed to get back to their winning ways. Now, as new USC coach CLAY HELTON leads the Trojans to South Bend for another battle, the Irish hope to emerge victorious...

Wow. Only a few hours after Michigan suffered one of the most improbable last-second losses in college football history against MSU (honestly, it couldn't have happened to a better team, eh?), Notre Dame vanquished its other archrival in a hard-fought 41-31 win over USC. Our beloved team is now 6-1 heading into the bye week, a position that many teams would kill to be in. And to celebrate, let us continue to indulge in our silly weekly tradition of captioning photos...

--CleverScreenName took third place with a variation on the selfie theme from the post-Clemson  selfie craze: 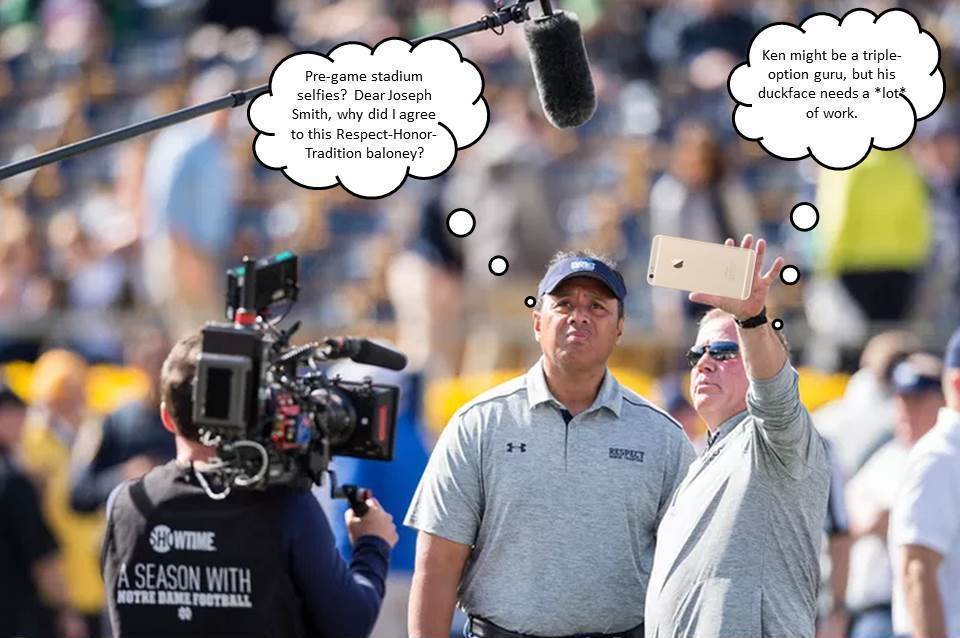 --Kelly's Gyros took second place with a playful jab thrown in the direction of one of the fanbase's more...opinionated contingents.

--And our winner for this week is Goodoldtk, who delivered a massive zinger against Navy's exclusive RTDB-themed offense:

Although this may be a bye week for our boys in Madonna blue, our competition rolls on! This week's entry displays QB Deshone Kizer getting upended by USC safety Leon McQuay III at the end of a long run. Give us your best caption or photoshop, then go enjoy those bye week cheesburgers! (Or whichever of our Football Foods you decide to create.)