As The Selection Committee Turns: Week 2

Always, always, ALWAYS lock your computer when you walk away. Tsk tsk, Pat.

Share All sharing options for: As The Selection Committee Turns: Week 2

Our playoff committee mole did yeoman's work in reporting on last week's clandestine committee meeting. We love that kind of behind-the-scenes look at the workings of the inner sanctum, but we need to be careful about exposing our mole week after week. This week, we had a great low-risk opportunity to take a look at one committee member in particular, USC athletic director Pat Haden, when he headed to the boys' room and forgot to lock his computer. Our insider managed to surreptitiously grab a screen capture of Haden's inbox - check it out for yourself (click on the image for a larger view): 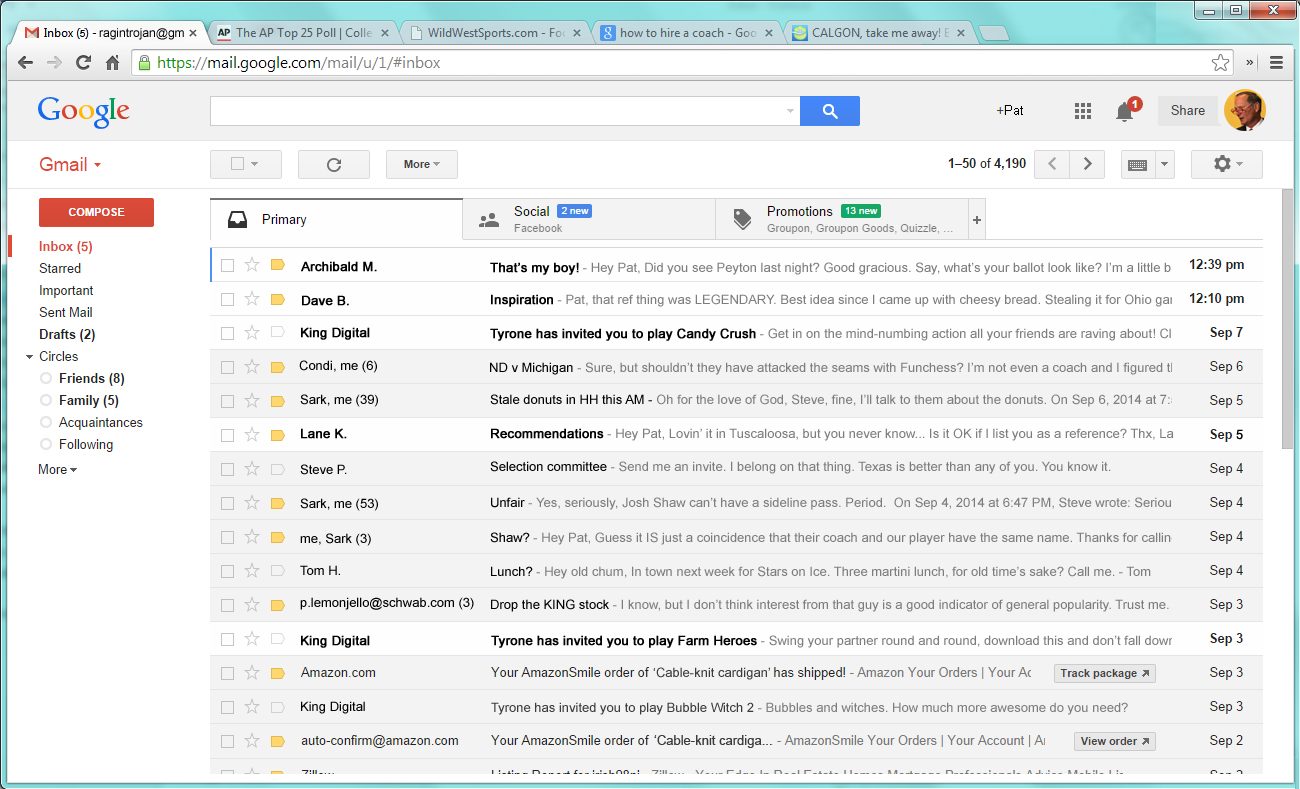 1. Florida State - Until someone can give us a good cause to do so, they're not moving. DL injuries against the Citadel could be an issue going forward, though.

2. Oregon - Wow. Did not see that coming. A very impressive win for the Ducks vaults them to #2.

3. Oklahoma - Two yawn-inducing wins against overmatched opponents, but no reason to move them yet.

4. Alabama - Sort of an inertia pick - hard to tell how good they really are, but hard to rank them lower (so far).

5. Auburn - Like (most of) the other top teams, they took care of business during Cupcake Week.

7. Texas A&M - If A&M has any kind of defense they might just walk to the SEC West title.

9. Notre Dame - I might be going full plaid too soon, but using the "who would win" test I can't see ranking ND lower.

11. Michigan State - Still trying to scrub the webbed footprints off its back.

12. Arizona State - Might be the second-best offensive team in the Pac-12.

13. USC - I can't put them behind Stanford, but it doesn't feel like they did a whole lot to win that game.

14. Stanford - Was it a bad day? Or is it a sign that the post-Harbaugh decline might actually have arrived?

15. Ole Miss - Not really buying what they're selling at this point, but that defense does look pretty good.

16. UCLA - Even this might be a gift, and facing an angry Texas team on the road next weekend might prove that.

17. Virginia Tech - Crashing into the rankings after an impressive showing at Ohio State.

19. Missouri - Took care of business at Toledo; sure it's a MAC team, but they get some credit for actually being on the road.

20. Kansas State - Struggled with perennial doormat Iowa State, but pulled it out late.

21. Louisville - Petrino is up to his old tricks, hanging 66 on Murray State. This could be a scary team later in the season.

22. Clemson - Kicked the dog by taking out their frustrations on South Carolina State; they'll try the cheeseburger tactic this week.

23. Ohio State - Really wanted to drop them out, but using the "who would win" test I couldn't. Still... Struggling against Navy and losing at home to Virginia Tech - this could be a long year for OSU, especially with that murderer's row of a schedule.

24. BYU - Holy demolition, Batman. A year after rushing for 550 yards against the Longhorns, BYU put up 429 total yards and obliterated Texas. They could make some noise all season with a tough defense and dynamic offense.

25. South Carolina - Destroyed at home by Texas A&M in Week 1, in a dogfight with East Carolina in Week 2, and hosting Georgia in Week 3. Probably not a great start to the year for South Carolina.