Share All sharing options for: The Week in Notre Dame Athletics: Wins for Men’s & Women’s Soccer

As noted last week, The Week in Notre Dame Athletics exists to bring you updates on how all of Notre Dame's Olympic sports fare each week.

Without further ado, we bring you the results of the last week's Irish match-ups.

No. 2 men's soccer (2-1-1) rolled over Dartmouth on Saturday afternoon, earning a 4-1 victory. Goals came from Leon Brown, Evan Panken, and Vince Cicciarelli, with assists from Panken, Nick Besler, and Jeffrey Farina; the fourth tally was deemed an own goal when Connor Klekota's shot deflected off of a defender. Dartmouth had three shots on goal and Irish netminder Patrick Wall had two saves.

At the half, Notre Dame was presented with a $200,000 check after Irish men's athletics won the 2014 Capital One Cup. There was a similar presentation during the football game, as well. 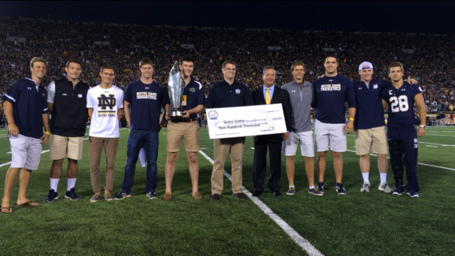 Congratulations to the Irish for that.

Monday evening, the Irish were dealt a cruel last-second blow when Kentucky claimed a 1-0 win on a 90th-minute goal from 15 yards out. The Irish made seven shots on goal to Kentucky's three, with just a single Wildcat shot in the entire second half of the game. Notre Dame led in corner kicks, 8-0, and was whistled for just 3 fouls to Kentucky's 18.

Next up for the Irish is a match at Syracuse this Saturday night.

Irish volleyball (0-5) is hurting. There's no way around it. After falling to two ranked teams the previous week, Notre Dame lost star outside hitter, Toni Alugbue, to an ACL injury in practice, and then fell to all three of this past weekend's foes. The Irish claimed their opening set vs. Washington State, 25-23, but then dropped the next three to lose, 3-1.

They then fell to IUPUI in three sets, hitting just .138 with no service aces and six errors. They dropped three in a row to Western Michigan on Sunday, though against the Broncos, they kept it much closer.

After a first-place finish to open the season, Irish men's golf tied for 10th-place at the 54-hole Gopher Invitational in Minnesota. Matt Rushton led Notre Dame, coming in at 11th overall.

The team next competes in the Windon Memorial in Chicago beginning on 21 September.

After returning from an off-season trip to Ireland, the women's golf team begins their season this weekend at the Mary Fossum Invitational in East Lansing.

This past weekend, cross country began the season with a first-place finish and recorded the top two times on the men's side at the Crusader Open in Valparaiso, IN.

The team next hosts the National Catholic Championships on the weekend of September 19.

As noted last week, other sports will pick up shortly: men's and women's tennis will begin play later this month, followed by hockey and swimming in early October.