Well, that was awesome.

Notre Dame rolled to a 31-0 victory on Saturday in their last contest with Michigan.  Here is a review of the special teams performance. Going forward, in the interest of cutting down the size of these reviews/previews, I am going to aim to have a review of the special teams out by mid-week and a preview for Fridays, so set your calendars.  Here we go.

Similar to last week, Kyle Brindza took all six kickoffs and like last week and 5 went for touchbacks.  Dennis Norfleet had the lone return for 16 yards. Please keep your eyes peeled on the first ND man down at the 10 yard line:

(Edit: It was Devin Butler) This, to me, looks like a block in the back (uncalled). It is difficult analyzing what happened on a play like this, considering that Norfleet ran right in the hole vacated by this block.  Despite that, there are some things that ND did well on this return, as you can see below: 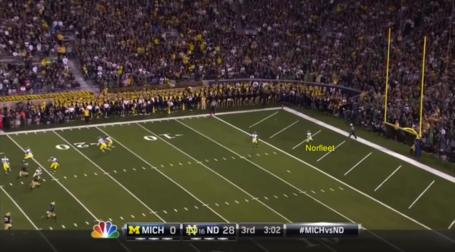 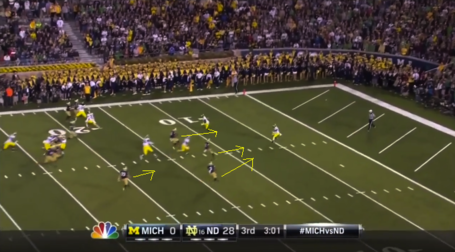 ND's coverage team is already within view by the time he even gets to the 5 yard line.  For a refresher, I use the 25 yard line, the touchback line, as a base on whether or not a kick return is successful.  Based on this view, unless there happened to be a colossal amount of missed tackles, Norfleet has no chance to get this ball to the 25. 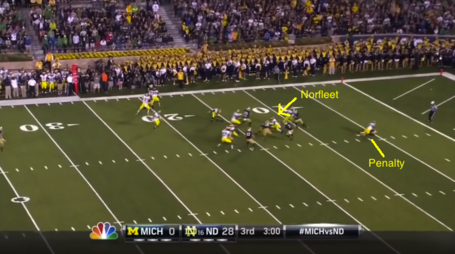 To his credit, Norfleet managed to find a small hole in between a combination of Randolph, Carlisle, and Cavalaris but he could not get away from Tranquill, who was credited with this tackle.

ND benefited from a poor decision by Norfleet. They also got downfield quickly, kept their lanes, and made a stop.

Kyle Brindza took all six punts in the game for the Irish, totalling 230 yards on them, an average of 38.3  He had a long of 47 and two inside the 20.  None were returned. The resulting starting field position for Michigan was:

Brindza's only real poor punt was his final one.  The impression I got from this one was that Kyle rushed it to prevent a block.

I think the GIF confirms this.  Michigan came awfully close to getting a hand on this one and I think the only thing going through Kyle's mind was "Get this thing out of here."  The rear three blockers also need to do a better job of preventing penetration.  Regardless, Michigan's average starting field position off of these punts was approximately the 22 yard line.  That is fantastic.

One of the things I did want to touch on was the Michigan misses.  Matt Wile, as I noted in my Preview, had few career attempts leading into this game, was shaky from distance, and missed last weekend to the right.  This was the case on Saturday.  Wile missed both field goal attempts he tried on Saturday, a 46 yarder and 48 yarder.  On the first, Wile shanked it right, and on the second, he dinged it off of Ben Councell's facemask.  On both, however, I believe his shoes, or rather, his plant shoe, was the culprit:

This is the view from Wile's second kick.  As you can see from this view, it looks like Wile takes an aggressive plant and his plant foot does not gain sufficient traction in the ground.  I think a similar thing happened with the first kick as well (NBC video pans up just before it shows contact).  Wile is wearing soccer cleats, which have shorter studs than football cleats.  In contrast: 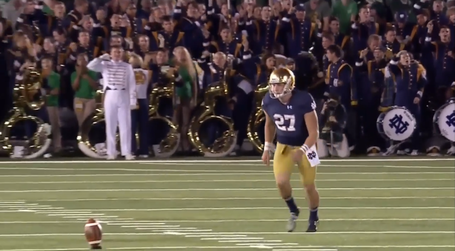 Kyle Brindza looks like he's wearing a football cleat on his plant foot.  Traction is important when you have to be aggressive in a kick.  Since Wile's attempts were so far away, he likely went very aggressively into each kick.  The first field goal seemed to tail away, which makes me believe that Wile's foot came across the ball, right-to-left, and did not hit it clean, straight through, likely due to a slip.

Amir Carlisle only had one return on Saturday--the opening kickoff--because it was the only kickoff ND's return unit saw all night (that feels great to say).  Amir returned it for 16 yards. 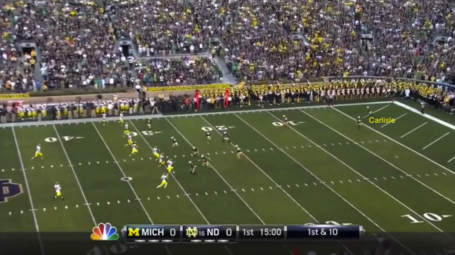 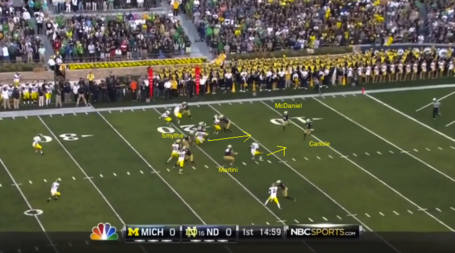 I think there was a miscommunication here. Like with Kick Return 2 against Rice, Cam was slow to react, but at the same time, Amir simply ran right by him and did not wait for the block.  Surprisingly enough, only two ND players (Greer Martini-48 and Durham Smythe-80) lost their blocks, and both were in the middle/left of the field.  If Amir had run right, he would have likely made it further.  This was not a disaster of a return but something that can certainly be improved upon.  It is a very easy fix: follow the blocks, hold the blocks, run fast.

For those of you who read my Preview, I thought ND could take an advantage in the punt return.  After Saturday, it was apparent that the Michigan coaching staff agreed and adjusted appropriately.

Will Hagerup punted 4 times in the game for 170 yards, averaging 42.5 yards per punt, a long of 48 and one inside the 20.  Amazingly, for the second game in a row, every punt resulted in a return.  Cody Riggs took 3 of these returns for 20 yards, a long of 12.  James Onwualu was credited with the 4th, recovering Riggs' fumble and, remarkably, getting a 6 yard return.  Hagerup's net punt average was 36 yards.

So what happened? From my seats at the game, you could see that these punts were not crushing spirals, but end-over-end kicks designed to fall short and bounce--the squib kickoff of punts, if you will.  Michigan figured, I believe, that ND's return men would not even attempt a return and let it bounce.  Instead, the opposite was true. Let's take a look at the fumble as well as the 12 yard return. 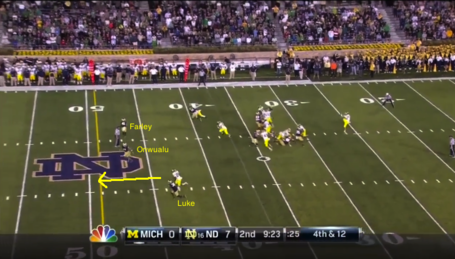 It is hard to tell from the video, but the ball was wobbling like crazy, going end over end.  Problem #1: Cole Luke's gunner has beaten him.  Problem #2: Mathias Farley is in the middle of the field and not looking to block anyone. 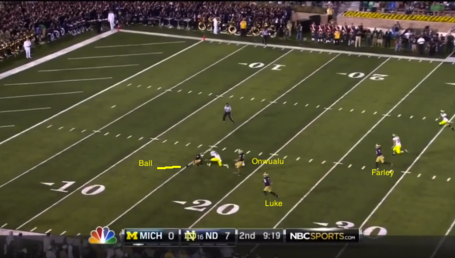 Here is the bobble.  It was Luke's gunner that hit Riggs first.  You can see Farley standing on the 27 doing nothing, with Michigan's snapper right behind him.  Keep in mind that if both Luke and Farley make these blocks, there is nobody in front of Riggs, bobble or not, and he would have had Onwualu lead-blocking for him. 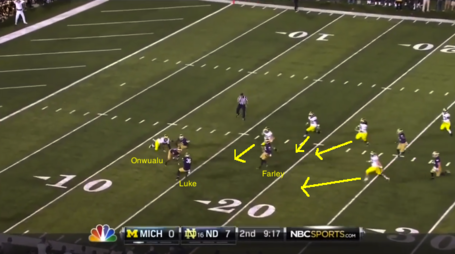 And here is when Onwualu picked it up.  Luke is still ball-watching, along with Farley, though Farley now sees a Michigan guy (snapper) in his perpheral vision and decides to take a shot.  Onwualu made a couple of nifty dodges but the verdict was in.  Decent return that could have been great.

Riggs' longest, and most frustrating (to me), return of the day went for 12 yards. 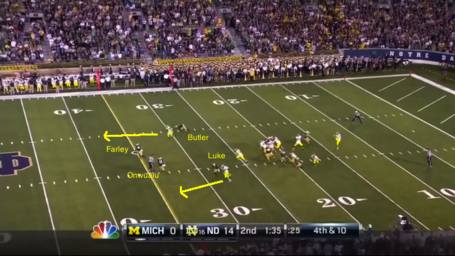 Here is the point-of-contact.  Michigan brought their left gunner in close to the line for this kick and left the right one split out wide.  Onwualu and Farley are the "linebackers" and both watch for a fake and retreat, like with the first punt.  Luke had the left and Devin Butler had the right.  Both were beaten off the line. Bad. 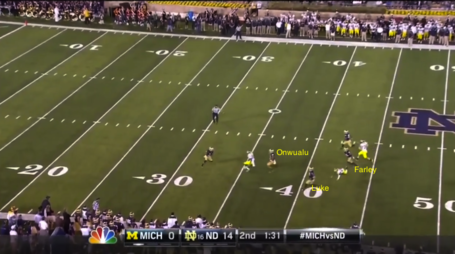 The ball bounced just past the 40 yard line and Riggs fielded it at the 32.  Luke's gunner has Riggs dead to rights, forcing Cody to make a move to get by him. Farley knocked the top gunner to the ground. 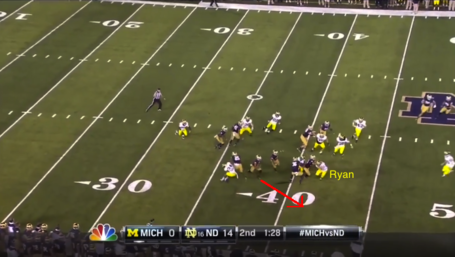 Here is #47, Jake Ryan, who ended up making the tackle. 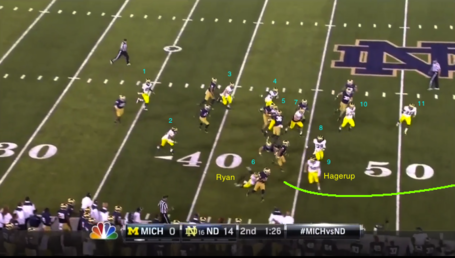 Ryan was Cam McDaniel's responsibility and he made an excellent move on Cam to get by him and make a play.  I should note the arc I have drawn on this screenshot.  All 11 of Michigan's punt coverage players are on this screen.  The safety valve (behind Ryan) is the punter, Hagerup.  If Cam could have made the block on Ryan and Luke on his gunner, this could have likely been returned for a TD.

Arguably, the biggest disappointment of both returns was not double-teaming the gunners.  Both beat Butler and Luke routinely, diminishing the returns.  Had ND done this, the results may have been a lot worse for Michigan.

I welcome your comments below.