The series ended rather nicely, I think.

The young Notre Dame defense played one of the best games of the Brian Kelly era on Saturday to defeat Michigan 31-0 and knock on the door in the Top 10 rankings in the country.

Play-Call of the Game: Golson 24-yard Touchdown Pass to Fuller

Notre Dame took possession of the ball on their 44-yard line with just 1:24 left in the half and no timeouts. After 5 plays the ball was moved to Michigan's 24-yard line and on 3rd &1 Golson heaved a beautiful pass into the end zone where Will Fuller leaped for an even more beautiful touchdown catch. That boosted Notre Dame's lead to 21-0 and allowed the Irish to take all the momentum into the break.

Quite an impressive game from Golson who, despite the struggles with the run game, wasn't asked to run the ball and be dynamic in that aspect of the game. With only 3 carries (1 being a sack taken) his wheels were a non-factor but the flip side was that Golson showed a lot of poise in the pocket and beat Michigan with his arm. In many ways I was more impressed with Golson this week than last. His decision making was precise, he didn't have happy feet in the pocket, and he was generally very accurate--only missing on a few throws that were just out of reach of his intended targets. The second half was nothing to write home about as Golson opened by missing his first 3 passes and finished 7 for 13 with just 57 yards. Still, on the second series he connected on four straight passes the last of which culminated in his 3rd and final touchdown. We'll probably need more out of him running the ball against the likes of Florida State and Stanford but this was a great passing performance in the moment that could have been even better with fewer drops and a little more accuracy on a few throws.

Notre Dame was coming off a touchdown to make it 28-0 late in the 3rd quarter but Michigan was in the midst of a drive that could have brought back memories of 2011 if the Wolverines finally got on the board. After a long connection drought, Devin Gardner found Devin Funchess for two passes that totaled 43 yards. On second down from Notre Dame's 39-yard line Gardner took off from the pocket, bounded left and right, spun this way and that, before Joe Schmidt caught him right in the chest causing a fumble. Isaac Rochell would recover the ball which allowed the Irish to begin the fourth quarter still nursing a shutout.

It wasn't a productive rushing performance by Notre Dame but in my mind it didn't seem quite this bad. If Michigan did one thing well it was bottling up the Irish running backs and closing running lanes. I thought the tailbacks danced around too much and should have ran with a little more power, though. Next week offers an opportunity against a really poor Purdue team to establish a strong run game again. We'll hear a lot about Notre Dame's recent struggles against the Boilermakers (143 yards on 73 carries the last two years) but remember the Irish did explode for 287 yards at 7.17 yards per carry against Purdue back in 2011.

There were a plethora of players to choose from but I'll pick the true freshman getting his first extended action of his career and making the most of it. Hill only had 2 tackles but they both added to Michigan's misery as he notched his first career sack and added a half tackle for loss.

Following the fumble mentioned above the Irish had decent field position and ran the ball twice with Greg Bryant setting up a 3rd and 1 to start the 4th quarter. In hindsight with a 28-0 lead it wasn't such a big deal but a screen pass to Carlisle was blown up for a loss of 3 yards forcing Notre Dame to punt and give the ball right back to Michigan. Even with the struggles running the ball I would have liked to have seen the ball given to a back or Golson on a draw.

Flag of the Game

I won't mince words. I love this play from Max Redfield because it's old-school and tells me he's got some nasty inside of him that we really hadn't seen until this game. Onwualu was about to size Gardner up too, and I like that as well. I'm okay with gentleman off the field but players who get real close to the line of mean or dirty.

On Redfield, cont: We felt he was doing his job

Notre Dame entered Michigan's red zone three times in the first half and scored touchdowns on each drive. That is a major win for a program that had a lot of troubles putting 6 on the board over the past two seasons. Notre Dame would later settle for a field goal after getting to the Michigan 10-yard line on a third down play in which Golson was called for intentional grounding.

The passing attack was really well orchestrated. Michigan's secondary tackled pretty well but otherwise they were as quiet as can be in the game. However, the run game was pretty frustrating at times despite the score of the game. Everything seemed really vanilla. Still, Kelly does deserve some credit for keeping the ball on the ground throughout the game despite the poor results. Golson threw 3 straight passes on 3 separate occasions but never 4 straight passes. Kelly typically sticks with the run while leading so it wasn't a big surprise but I thought it allowed Golson to stay comfortable and eat up some precious minutes in the game when we've been so scarred in the past by allowing Michigan the opportunity (and time) to come back on us.

The run blocking was quite poor at times and as Kelly mentioned after the game it was Michigan's design on defense to stack the box and take away the Irish ground game. Michigan had 8 tackles for loss which is way too many. Be that as it may, the line protected Golson really well (1 sack on the intentional grounding play plus only 2 quarterback hurries all game) and really nullified any Michigan pass rush.

So damn proud of this defensive line right now. Only two sacks on the evening but one of those was by a true freshman and the other by a left-for-dead fifth-year senior in Justin Utupo, who by the way flashed a couple more times in the game, as well. Sheldon Day stepped up (5 tackles, 0.5 TFL, 4 quarterback hurries) and proved why he's being spoken of so highly by coaches and scouts across the nation.

Most of all, the line played amazingly well against the run. Hyped former 5-star running back Derrick Green found almost no room all night long and finished with just 25 yards on 13 carries. Michigan did notch 100 yards on the ground, however, it was an empty 100 yards built off several third and long draw plays that did not go for first down and Gardner scampering for some positive yardage. The two UM running backs finished with 55 yards on 20 carries, so that's a job well done.

Andrew Trumbetti, Drue Tranquill, Kolin Hill, Daniel Cage, and Grant Blankenship all registered on the score-sheet. The highly touted Trumbetti had his bell rung on an early targeting no-call but came back after a few minutes playing well to finish with 4 tackles, 1 quarterback hurry, and a near sack of Gardner.

Justin Brent, Tyler Luatua, Corey Holmes, Greer Martini, and Durham Smythe were the other freshmen who got into the game. 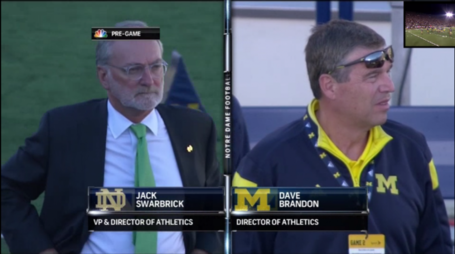 One man looks like an AD. Another, does not.