We sit down with Joshua from Michigan's SB Nation blog, Maize N Brew to discuss the (for now) final game in the Michigan-Notre Dame rivalry.

You can see my responses to his questions HERE, and give Joshua a follow @JoshuaHenschke. Without further ado, let's get a look inside the minds of the enemy:

1. Given this is the last time that Notre Dame and Michigan will play each other for the forseeable future, what type of stakes are the Michigan fans putting onto this game? Many Irish fans have said winning this game is the most important of the season from a mental stability standpoint -- how are the Wolverine fans viewing it?

I think any team would like to go out with a win if it were in a similar situation as this one. However, to focus on Michigan specifically, the game on Saturday is an obvious early season test from an offensive standpoint. Their all-around fantastic offensive output against Appalachian State can't really be used as a sample size to see how far the offense has grown from last season. It was clear that Mountaineer team was not the same squad as it was in 2007. With a team that is very similar in talent like Notre Dame is, performing well and coming out with a victory is going to give this team much needed confidence throughout the season.

Also, beating Notre Dame is always a big deal for the Michigan program.

If Michigan can find a way to establish the run like it did last week, Devin Gardner won't need to do as much as he did last season. The offensive line issues were not a major focus at the time, so seeing him run for his life and pick up yards on the ground could've been seen as normalcy for some Michigan fans.

The loss of KeiVarae Russell is a huge blow to that secondary. I strongly considered him the best player on that Irish defense. However, if you're Michigan, if the suspension continues through the weekend you must take advantage of that huge hole. That's where Devin Funchess comes in. He's a huge guy that is able to create match-up nightmares for any defense. If Gardner can counter the aggressive defense with continued efficient passing and the offensive can get some semblance of a running game together, it might have a shot to win on Saturday.

3. Much has been made in Irish circles about the perceived weakness in Michigan's offensive line, including starting a true freshman right out of the gate. After losing Taylor Lewan, do you think the Wolverines' offensive line will hold up to the test that Notre Dame will present?

That's going to be a great test. Michigan lost a lot on the offensive line and Notre Dame lost quite a bit on their defensive line. Seeing how the two will come together on Saturday is going to be very exciting. Like I said before, this is the first of many "measuring stick games" that will happen throughout the season. I've said all season that the offensive line needs to be "good enough" and doesn't have to be "great." I would consider Saturday a success if the offensive line can hold their own, especially true freshman left tackle Mason Cole, and create enough gaps for Derrick Green and De'Veon Smith to establish a running game.

4. With Doug Nussmeier now at the helm of the Wolverine offense, what are the biggest changes we are going to see on Saturday from the past iterations of Michigan's offense?

I think a more "traditional" Michigan offense will be displayed on Saturday with a strong focus on the power running game. I am not sure what else to expect because Nussmeier did not divulge much during their first game, so it'll be interesting to see how much he opens up the playbook.

5. Who are the impact players on each side of the ball that Michigan needs to step up in order to gain a victory on Saturday?

On the offense, it has to be Funchess. He is going to be a target for Gardner all season long along and it appears they have great chemistry together as they hooked up for three first half touchdowns last weekend. Like I said earlier, Funchess is a match-up nightmare because of his height and size. He's deceptively fast and can blow right by you as well as muscle through tackles. If he can get established, he could be looking at another nice game.

On the defensive side of the ball, linebacker Jake Ryan will have a big task ahead of him: slowing down Everett Golson. Moving to the middle, he will be able to snuff out run plays and now will watch for Golson if he decides to keep it and run with it. Michigan has the deepest defense it's had in years, it'll be interesting to see how it's used against the Irish.

6. Finally, what is your prediction for Saturday (bonus points for GIF usage)??

I couldn't find any gifs, but I'm sure this will happen at some point on Saturday: 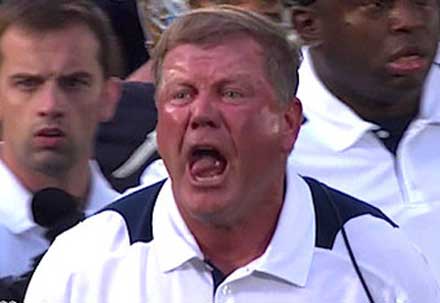 I think I speak for all Irish fans when I say thank you to Joshua, and good luck on Saturday (maybe not most Irish fans...).