Mouth talks Meatchicken; or How I Learned to Stop Worrying and Hate the 'chicken.

This week's Five Wide Fullbacks column brings you a few not-assuredly coherent ramblings on the first week of college football and the week to come.

Is this really an accurate phonetic spelling of the way Michiganders pronounce their home state?  Having shared a 7-man with 3 Michiganders in the South Quad's finest residence hall--and only Manor--I would favor "Myachigan."  In any event, how badly do I hate Myachigan?  It really evades articulation.  But I just feel this burning fire rising up from my gut to my chest, threatening to overtake me.  The seething rage threatens to boil my very blood.  My eyes shutter and threaten to jump out of my head.  I care nothing NOTHING of those no-offensive-line having, no-nephew-saving, SEC wannabes from L.A.  Strange to write this, and talk to me before SC game, but today, I feel nothing for SC.  I do not care about anything but beating the urine-hued helmet wings.

As for the actual football aspect, I'm at war internally.  My rational brain is telling me that we're a deeper, more talented team, that our offensive line is strong and will dominate, that our skill position players will sizzle, and that our defense will reveal the 2014 Michigan offensive line for the redux of Meeuchigan's 2013 offensive line that it is, minus the talent.

I just have this nagging--and I think irrational--fear that strange and incomprehensible things will happen, and that we will have to offer up our suffering another inexplicable loss for some greater good.  A commenter on another ND site said that the 2011 Michigan game Under the Lights changed the way he cared about sports.  Maybe that was a good thing for him.  Personally, nothing short of having children has forced me to evaluate whether sports has a rightly ordered priority in my life.

After Michigan 2011, I remember feeling sick to my stomach.  Never have I felt such physical revulsion for anything, much less sports.  I don't think I cared any less about ND football as the result, though.  I can't--I won't--give the skunks that kind of power over me.  Then the terrorists win y'all, and we can't let that happen.  Saturday will bring either overwhelming joy or deep despair, but I refuse to let pompous, buffoonish, Kinesiology majoring, no-minority-graduating, cardboard-flavored-pizza magnates dictate how much I choose to care about Notre Dame football.

So I will follow Charlie Weis's advice and "Dive Right In" to unfettered optimism for an Irish blowout and hatred for all that is the University of Michigan.  After all, it is an institution, not a person.  We should feel no compunction about hating an institution, much less one that is such a clear earthly manifestation of evil and cheesy uniformage.

Clearly Notre Dame Athletic Director Jack Swarbrick will "serve" Michigan AD Dave "DiGiorno Dave" Brandon in some fashion after an Irish blowout win on Saturday.  But how will he do it?  Your Notre Dame Savvy Jack Fan Fiction submissions on this question are welcome in the comments section.  Here's mine: Swarbrick will hand Brandon an envelope.  In the envelope will be a letter.  On that letter will be written the words "Neva scurd."  Except when Swarbrick hands over the envelope, he'll say something like, "How's that for a value added experience ... [expletive deleted]."  Then ideally he'd uppercut Brandon onto a table filled with punch, petit fors, and other light refreshments.

I think, actually, on second thought, this is the point when Swarbrick hands over the envelope.  But instead of handing it over, he stuffs it into the open mouth of Brandon's semi-conscious face.  Actually, that's a bit harsh.  Of course Jack's uppercut would leave any man completely, not semi-, unconscious (though alive).  Gentleman Jack knows restraint, y'all. Still, it does a fool no good to suffer him.   But I say Jack stuffs the envelope into the breast pocket of Brandon's polyester JC Penny blazer.  Or maybe he hands over the envelope, then the uppercut, then he stuffs a fifty in Brandon's breast pocket and says "an Athletic Director should do better than Supercuts, David." 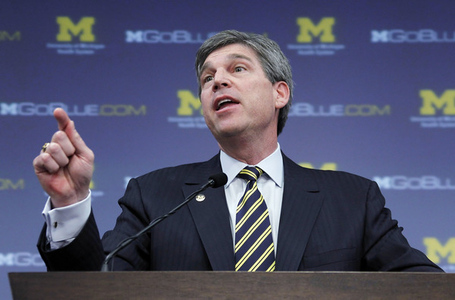 That was such a refreshing home opener.  I really was about to jump out of a window after starting the game with consecutive three and outs, but my lovely wife, saint that she is, reminded me that we were only 5 minutes in to the first quarter.  And I recalled that Golson hasn't played a football game in two years, and new line, and new skill position players and all that.  So we build up a head of steam on a delicious and savory pairing of a sustained running attack with some delectable big plays from the QB position.  Irish win big. 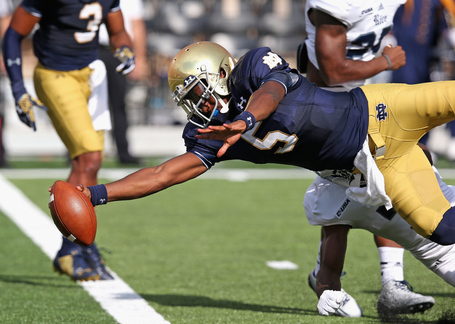 Time will tell how good Rice is, but beating the reigning Conference USA champ by over 20 when you easily could have scored 50 and actually did average 9 yards per play has some nice aesthetics to it.  Add in that the new field was lookin NOIICE, the UA unis were fresh (even the ugliness of those shoes was not readily apparent on TV; love the gold outline on the white numbers), we're playing more 0% body fat, eyeball test guys like Jaylon and Bryant, the Irish were making big plays, and Fighting Irish Digital Media put out a sweet Irish Connection video, and the effect was an aesthetically stunning weekend from Irish football.

Can we now all agree that UCLA was and has been outrageously overrated?  They needed 3 defensive touchdowns to beat UVA.  UVA.  But yet Brett Hundley is somehow a smarter, classier, handsomer, better-ab-having Johnny Football who hasn't had a carb since 2006.  I can give you the height, weight, 40-time, star rating, hometown, and jersey number of any player on ND's squad, but I'm admittedly not the most astute follower of college football writ large.  So take this with a grain of salt, but I had no idea that people considered Brett Hundley to be "good," much less better than Marcus Mariota until people started talking about the preseason polls.

But yet there UCLA sits, just outside of the top ten.  Railing against the ridiculousness of the way preseason polls bestow gravitas for no reason whatsoever for having done no thing whatsoever is not exactly a new or novel strain of thought, and really, what is the alternative--do we all just pretend that we don't want to rank everyone as soon as the previous season ends?  I get that everyone loves being an expert and arguing over rankings, so the preseason polls are fun and exciting, but this ranking inertia that the pollsters are mired in is just a monkey on all our backs.  Maybe it's not the preseason polls I hate, but rather the very human tendency towards conformity.  So maybe it's the pollsters I hate, but maybe, just maybe, I'm angry at what flawed, fallen beings we are.

On the opposite end of the expectations scale was A&M.  We were all sure they'd take a step back without the totally classy, consummate professional, and all-around well mannered bastion of good taste Johnny Manziel.

This apparently angered Texas A&M Coach Kevin Sumlin.  Apparently you do not want to anger Coach Kevin Sumlin, because you will get your stuff just straight up ruined.  Good lord, 50 points on an SEC defense?  I know, I know, the SEC is increasingly an offensive (in every sense of the term) league, and yes, South Cackalacky was bound to take a step back defensively without TheHitmaster Jadaveon Clowney (has anyone ever told him that his name contains the word "clown"?  I doubt it's happened more than once.), and yes, they are apparently now an SEC team running a new look 3-4.  But dang.  A&M hung half a hunnerd on ‘em with a brand new QB.  We desperately need to get Malik Zaire the kind of reps that allow a guy to step in and perform like that right away.

Jameis Winston.  I'd love the swagger if he was on my team or otherwise a good dude who just happened to fight for the wrong side, but as it is, he's a creep that plays with and for a bunch of creeps.  He's the anti-Ali.  Ali acted the heel, but in real life was the Face, even for all his human warts.  Is Winston Ali's antithesis?  He acts the part of the cheery, effervescent, fun-loving, bragadocious team leader, but behind closed doors is the mastermind miscreant of a seedy Tallahassee underworld of crustacean malfeasance and alleged sexual malefactions.

Not the most current analysis, I know, but I also made an Austin Powers reference last week.  I have kids now.  Give me a break.  In any event, I've concluded that Winston is Jesus from the Big Lebowski.  It's no more complicated than a guy we rightly dislike (or rather, whose deeds we rightly dislike), playing for a team that we rightly dislike.  Then again, true, he's done some rather unsavory things, but haven't we all?  I do so tire of self-righteous, Keith Olberman-esque, worst-person-ever hate mongering.  So I choose to hate Jameis's actions and hold out hope for Jameis the person.  Maybe his transcendent play will cure cancer or something this season.

On the football tip, do he and his squad look any more beatable after a somewhat bumpy performance against Okie Light?  I don't know.  That's a tough matchup for an opener, but that cuts both ways.  An NFL-heavy reigning national champion is a pretty tough opening matchup, even for males aged 40 and older.  I do take some solace in seeing a few chinks in the armor, though.

Speaking of armor, does anyone else watch Okie Light and wonder what is going on up in Stillwater?  I haven't looked at the stats on this, but I'd wager that they are always the most ripped team in college football.  Everybody who doesn't play line looks like Greg Bryant on roids.  Maybe it's confirmation bias, but those guys are insanely ripped.

That's it for your Hate Week hateration.  See you in the comments section.