Ignore the message board haters. This kid can play

Everything on the football field is earned, not given. If you're the best player, you're going to play. If you aren't, then you won't. It's a pretty simple concept that some people just refuse to believe in certain cases.

Those same people are the types of fans who immediately questioned when Notre Dame sent out a scholarship offer and accepted a commitment from Bishop Gorman (Nevada) safety Nicco Fertitta.

"His other offers are from who?"

"Oh, his Dad is the guy who runs the UFC. Now it makes sense"

"Why are we wasting a scholarship on this kid?"

This isn't going to be a plea for anyone to trust the coaching staff. Everyone is free to make their own choices. This is going to be my argument as to why Nicco Ferttita has the chance to prove all the doubters wrong and develop into a very good player at Notre Dame.

Fertitta does not fit the physical ideal of a Max Redfield as a safety. Not many do.  But he has the mentality and aggressiveness on the field that makes up for much of his physical limitations. He excels in certain areas that can earn him a potentially significant role with the Notre Dame football program as a strong safety and on special teams.

I might as well start there. This kid can be an immediate contributor on just about every special teams unit. Notre Dame finally looked good on special teams for the first time in a long time against Rice. It would be nice if the Irish could keep that up not only for this season, but in seasons to come. Fertitta plays with outstanding effort and has all the tools to be great in this area. Here's an example of an impact special teams play he made during his junior season at Bishop Gorman:

I can't even remember the last time a Notre Dame player made a block like that on special teams.

That's the kind of hit that can change momentum in a game and Fertitta consistently delivers these kinds of hits as a safety. I'm a big believer in big hits making an impact in a game and give a huge co-sign to this tweet from former NFL scout turned NFL Network draft analyst Daniel Jeremiah that talks about Rex Ryan's thoughts on big hits:

It's true and Fertitta is the kind of physical presence that can deliver those types of hits. He's also just a pretty darn good all around football player.

He tackles well in space (check out this great job he does on Oregon quarterback commit Travis Waller from last Friday's game against Servite) and does a great job of fighting through blocks to get to the football. He's more than a guy who goes for the knockout shot every time. He knows his role within the defense and executes it.

The play below demonstrates exactly what I'm referring to: 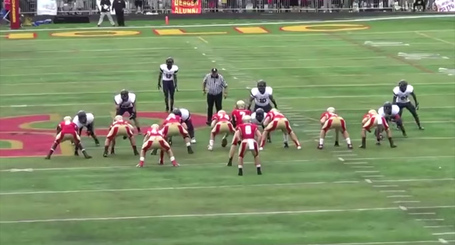 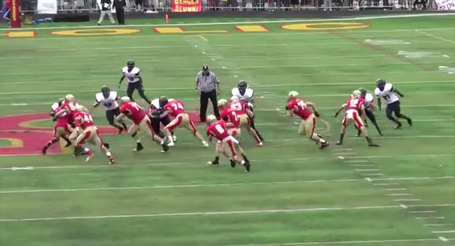 Fertitta is not in either of the screen shots above. This is only to show everyone the origin of the play. He is out of the shot to the left side of the offense. The offense is running an outside zone right to where Fertitta is going to be. 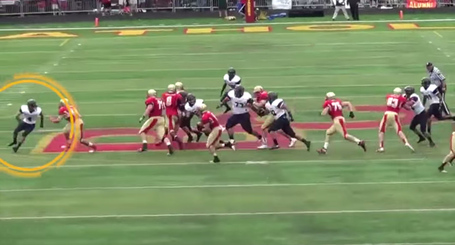 There's Fertitta! He's coming up to attack the run and has to take on the fullback who is trying to kick him out on the play. 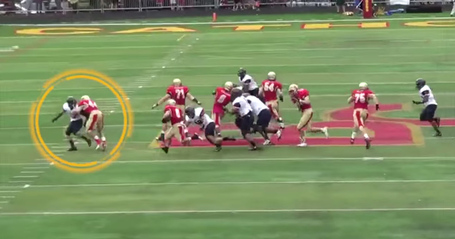 Fertitta takes on the block, but the key part of this play is that he keeps his outside arm free and maintains outside leverage on the play. If the running back gets outside of him, he could be taking it to the house. His job is to force the play inside or be there to make the tackle if the back bounces it outside. 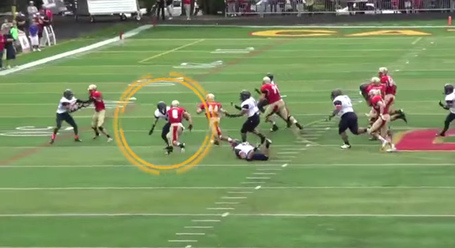 The pursuit forces the back to bounce the play and Fertitta is ready and waiting to make a tackle. 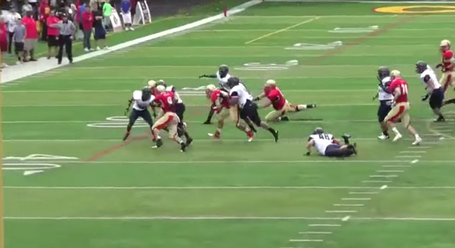 Andddddd that's a wrap. Fertitta secures the tackle and the rest of the defense is about to join in to help finish the play.

This play does not have the flash of a big hit that will make Sportcenter's Top 10, but it does show that Fertitta can be an effective player from the secondary that can jump up into the box to support the run.

All of this isn't to say that Fertitta isn't without his flaws. Of course I would prefer if he was 6'3" 215 and could match up in man coverage on the outside. But that's not who Fertitta is and that's okay.

He is smart football player that plays more physical than his size would indicate and shows solid recognition skills in zone coverage. Seeing how Brian VanGorder uses his safeties to attack and blitz makes me believe that he can find a role in the Irish defense and I know he can definitely find a role as a core special teams player.

Yes, I too want all of the recruits to be 5 star players like Jaylon Smith. But if I have a couple of Nicco Fertitta's on my football team, I would not complain one bit.