Time to indulge in the Wolverine Haterade.

Boy, it's that time already, eh? It seems like just yesterday that Brady Hoke blustered about Notre Dame "chickening out" to an audience of chortling "Michigan Men." Or was it just yesterday that AD David Brandon threw a fit about being outwitted via envelope by his steely-eyed, smooth-handed Notre Dame counterpart? The further back we go, the more memories (both good and bad) start piling up. The Wolverines working voodoo magic by combining Michigan Stadium lights with hideous uniforms...Manti and friends hilariously demolishing Denard's Heisman "campaign" in the space of one night...Bo Schembechler's 1988 team being sissies in the face of a little noise from a crowd half the size of the Big House...Fielding Yost taking his ball and going home after his first-ever loss to the Irish...the list goes on and on, my friends.

I could go blue in the face from recapping highlights of the Michigan-ND series, but it comes down to this:

I don't want to lose to these guys.

I don't want to hear Michigan fans crowing for the next 5, 10, 35, or 80 years about "Haha yeah, who cares if you're clobbering us in all-time winning percentage, we still beat you the last two times we played." I don't want to hear Mark May sighing wistfully and pining for the halcyon (and nonexistent) UM-ND days of his youth, and then have his inane ramblings accompanied by cringe-inducing highlights of Michigan wins. Most of all, I don't want to send our friends in Ann Arbor off to the death march of a 9-game conference schedule without giving them a proper burial farewell first! After all, what are national regional rivals for?

As always, no one expresses our enmity towards Michigan better then the legendary scribes of retired ND blog Blue-Gray Sky: "We are Notre Dame Football. You tried to kill us. Prepare to die."

For those of you who are new to the Trick Shot Wednesday phenomenon and/or to One Foot Down, welcome! The rules for this are very simple: every week, we will feature a silly photo from the previous week's game (or just a silly photo in general after a bye week). It is then up to you to submit as many funny relevant captions, Photoshops, memes, etc. as you can think of; your fellow members of the OFD Commentariat will vote for their favorites by clicking the star on a comment (known as "rec"-ing). Your submissions and votes are both unlimited (kinda like Chicago), so feel free to be generous with your gold stars!

This week's entry features a rather awkward moment in the Rice game. Rice QB Driphus Jackson released the ball just as he was hit simultaneously by Romeo Okwara and Sheldon Day. What do you think was running through their minds when this photo was snapped? Time to dust off your inherent wittiness and share your hilarious entries with us! I know that certain fanbases might quickly derail this entry into rather uncouth areas, but I have faith in your class and self-restraint...so for the love of all things holy, keep it clean up in here! [//stares at certain members of the Commentariat] 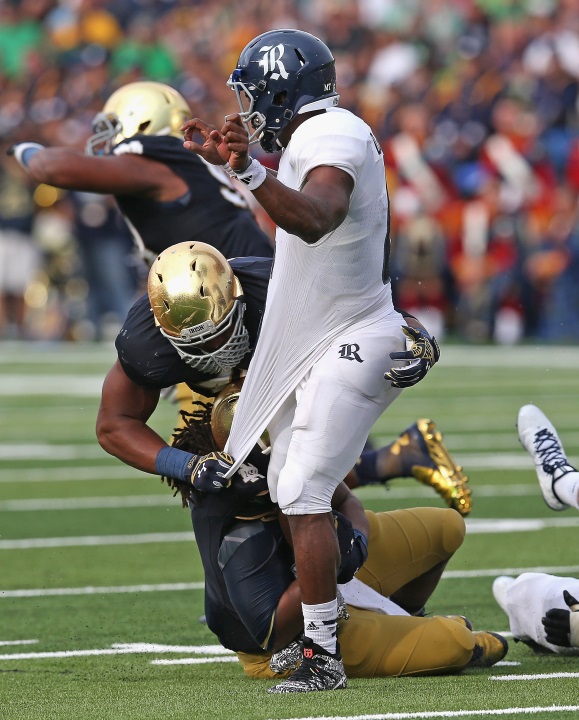 As per the suggestion of several past TSW winners in the Commentariat, preference will be given to entries that don't feature winning entries from last year (including Princess Occtipa, Ridiculously Photogenic Cam McDaniel, Shocked Oklahoma Cheerleader, etc.). This will hopefully serve to level the playing field and allow people to come up with fresh, original content instead of being crowded out by more experienced commenters referencing inside jokes and stagnating the process. Having said that...we're a lighthearted bunch, so if something makes you guffaw heartily, then by all means honor it with a gold star! We'll save the fine-toothed comb for the TSW Playoffs at Christmas, but for now, please vote with...rec-less abandon.

Anyways. Last week was the final week of the TSW preseason, and in a rare occurrence, Princess Occtipa herself was overshadowed by Kendall Moore's beer gut's [Ed. note: Fishoutofwater, please don't hurt me if I wrote that incorrectly] deadly duo: 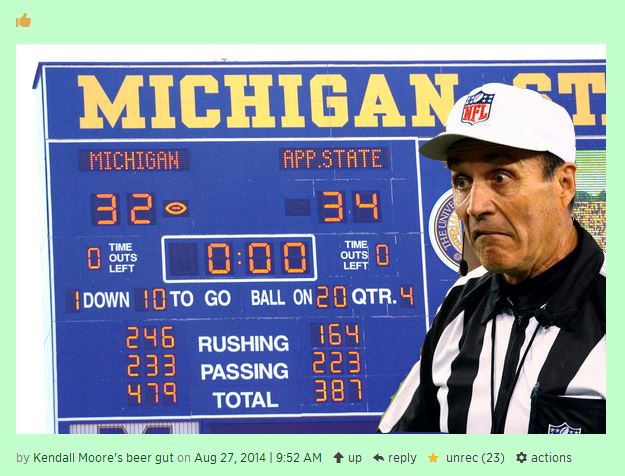 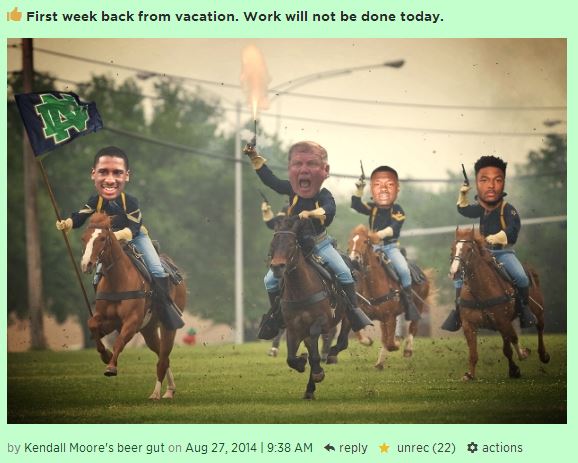 Springboarding off the expertise of OFD's resident real-life official clearwall (go read his excellent Fanposts on different rulings, if you haven't already!), occtipus decided to have a little fun. 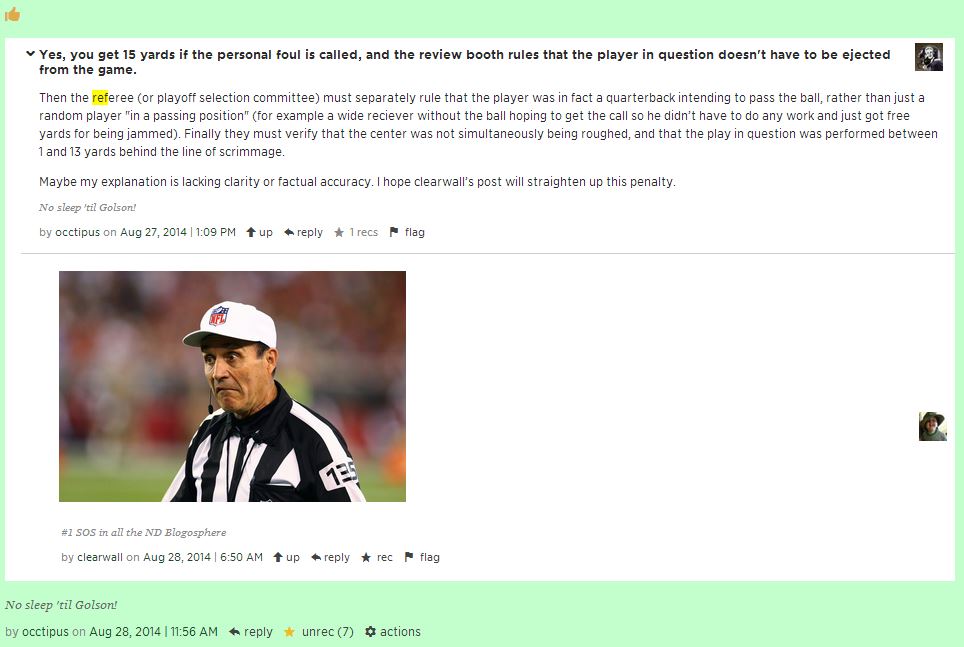 Speaking of occtipus, last but certainly not least is the adorable Princess of the Commentariat herself showing us all how it's done 'round here. 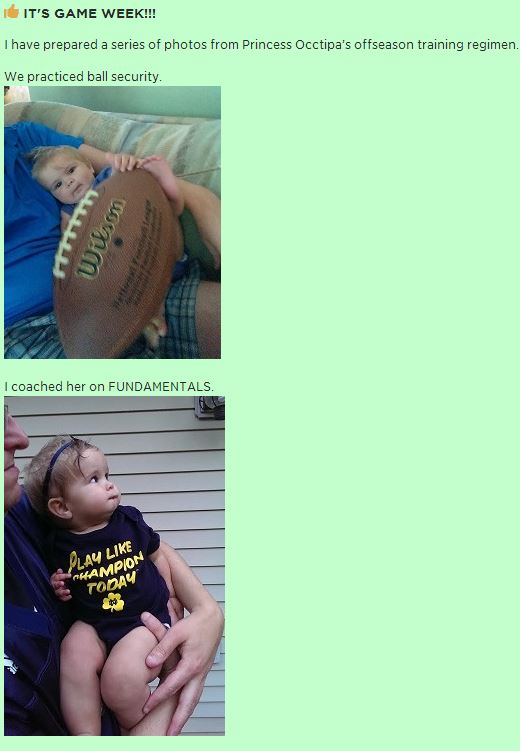 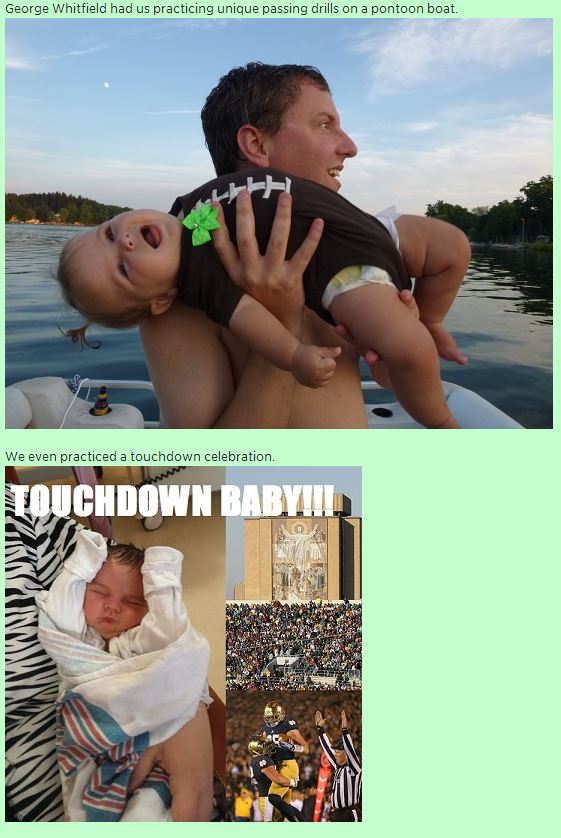 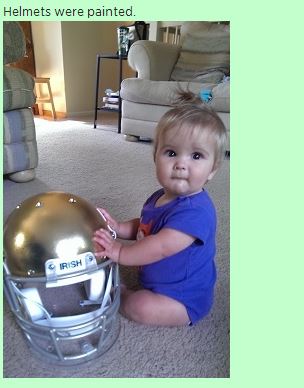 As I'm sure you all know, there's really no right or wrong answer to that question, except for the third answer, which is the right one.