OFD Films: Confusion in the Secondary

Share All sharing options for: OFD Films: Confusion in the Secondary

Coaches use a lot of clichés. Page 42 of the coaching cliché handbook details how to respond after a blow out win in the first game. It goes something like this:

Reporter: "Coach how do you feel after such a dominant win?"

Coach: "Our kids played with great effort and enthusiasm, but we've got a lot to work on this week."

There was a lot to like in Notre Dame's 48-17 victory over Rice. No turnovers, few penalties, improved special teams, a high octane offense, an athletic defense and a quarterback that at times looked unstoppable. But we are Notre Dame fans. We can find the dark cloud in even the brightest of silver linings. One of the most obvious? Confusion in the secondary. Put blown coverages in the "to work on" column for this week. Let's go to the film and I'll show you what I mean. 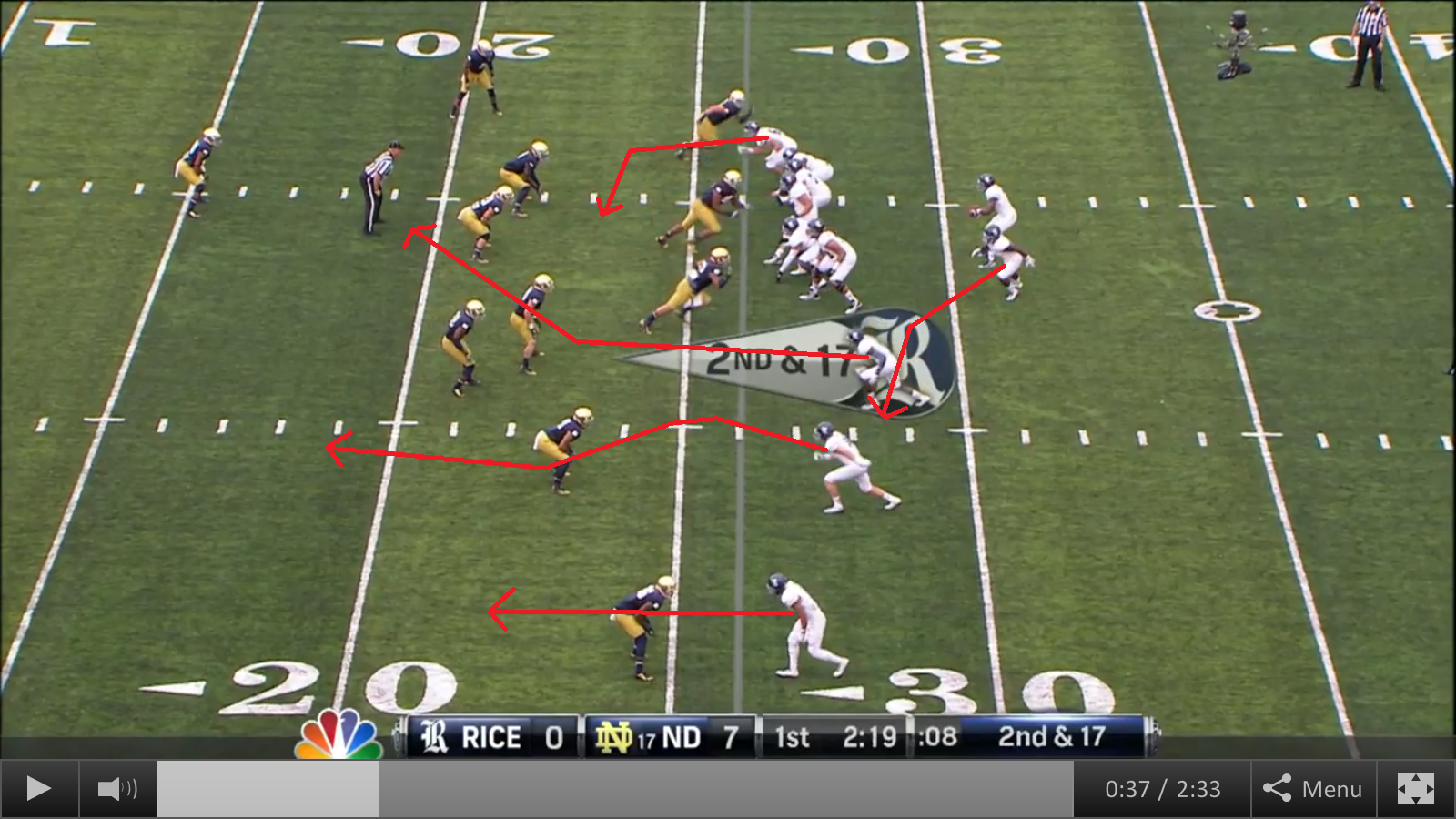 2nd & 17. The Irish are going to use the dreaded rush 3 drop 8 defense. Rice will run three vertical routes from the trips side. The TE on the backside and the running back will run underneath routes to provide a safety valve for the QB.

Conventional wisdom says the Irish will try to take away the deep threat, forcing an underneath throw.

I have to admit, I can't say for sure what Notre Dame was trying to do from a coverage perspective on this one. It's a bit of a gong show. But I'll give it a try. 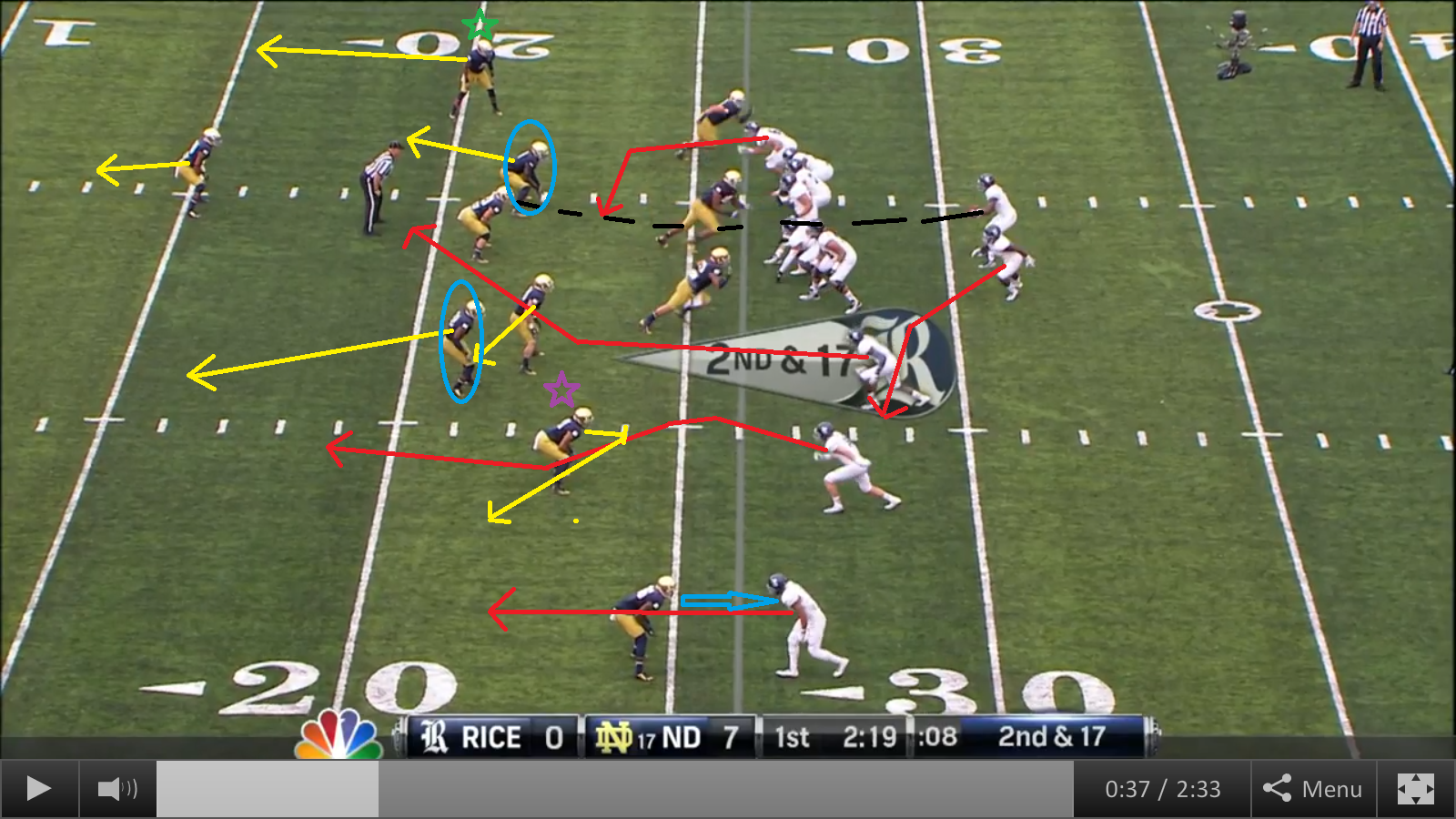 I think Notre Dame was trying to play a combination zone/ man coverage. There is a lot going on here, so I'll break it down by positions

As you can see from the yellow arrows, if everyone does their job, the Irish have this play pretty well defended. As we know that didn't happen. So who screwed up? I believe that the two circled players Elijah Shumate and Jaylon Smith were wrong on this play. Unfortunately for Shumate, his mistake had more severe consequences. 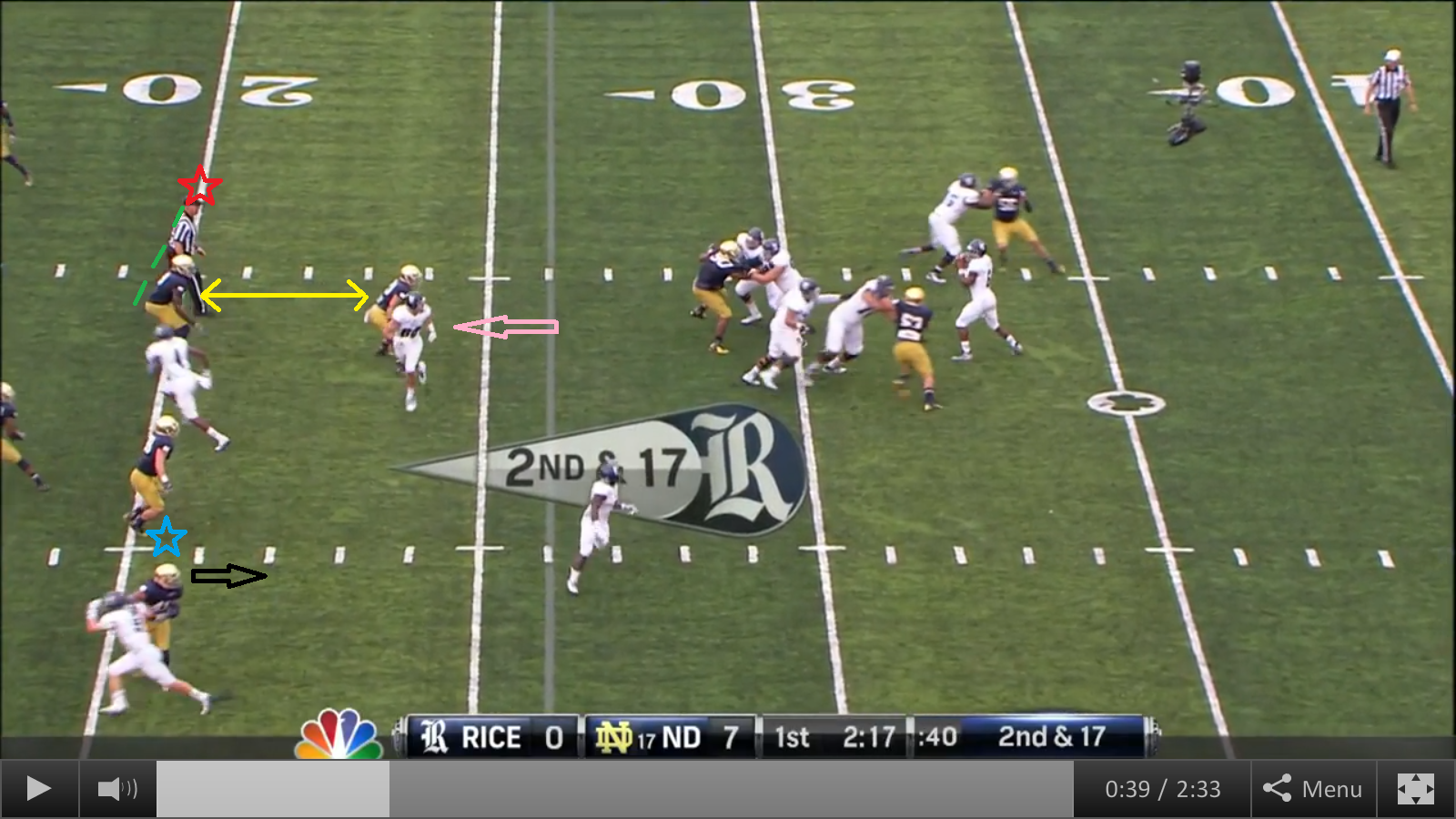 Notice the relationship between Smith and Tranquil (yellow line). They are basically stacked on top of each other. You never design coverage to have two players covering the same area like that.

There is a rule in zone coverage that says if someone leaves your zone, someone else is coming back in. As soon as Smith sees the tight end (pink arrow) leave his zone on a crossing pattern he should get depth and anticipate a crossing pattern from the other side. Therefore, Jaylon should have dropped towards the red star and looked for a receiver coming from the other side (green dotted lines). Smith made the classic mistake of chasing the tight end on a crossing route across the middle.

Matthias Farley (blue star) is in the process of jamming the vertical route. As previously mentioned, I believe he had underneath coverage responsibility on this play. That is why he is looking back towards the quarterback (black arrow). If Farley was responsible for running with the vertical route there would be a significant void in the coverage.  The running back would be wide open in the flat because both Farley and Luke would be gone covering deep patterns. 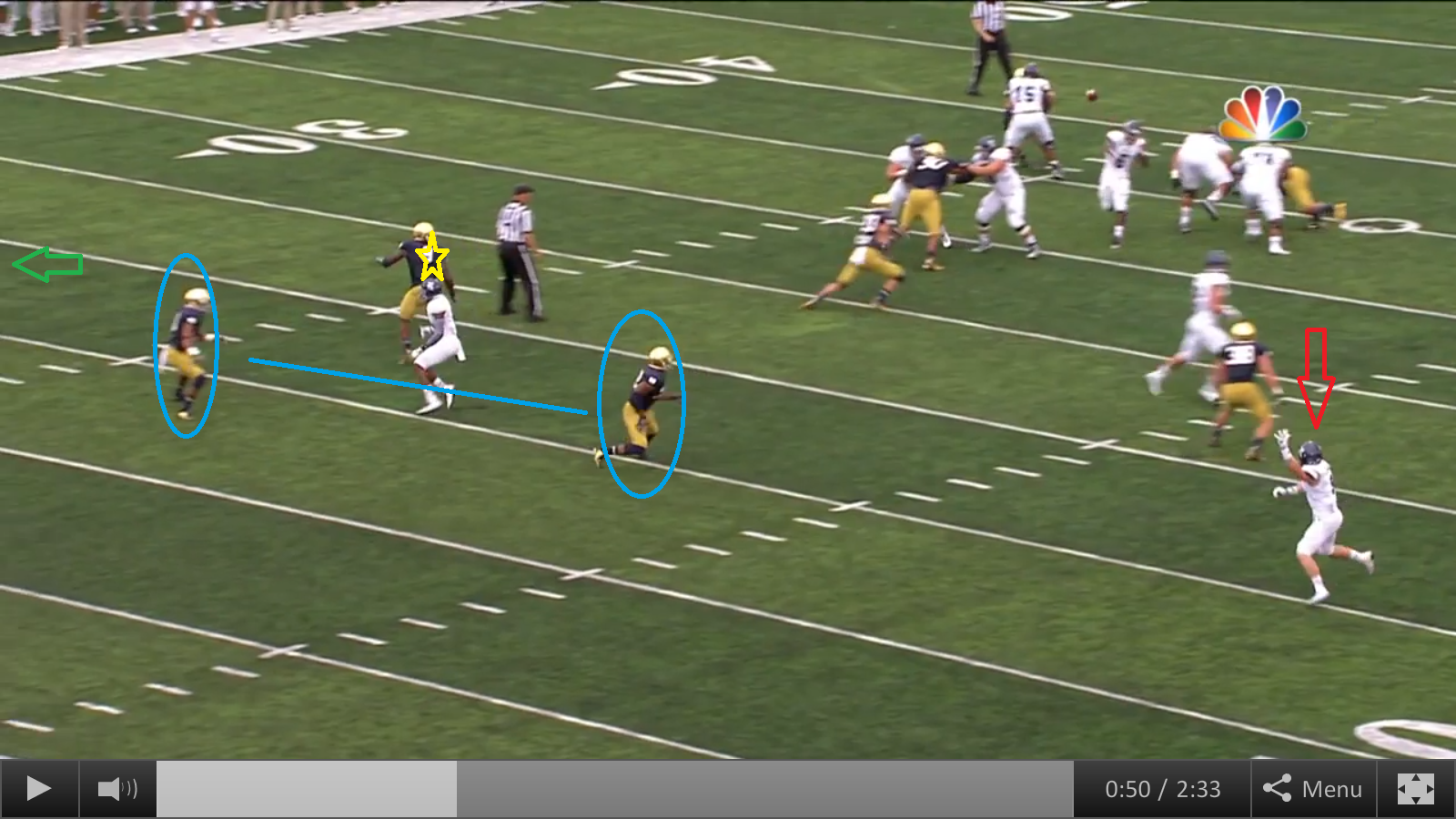 This screenshot gives us a great angle to see the issues in the back end of the coverage. First of all, Max Redfield and Elijah Shumate (blue circles) are too close together. Again, defenses are rarely designed to have two players cover essentially the same part of the field. As well, the receiver with the yellow star is triple covered, while the receiver with the red arrow is wide open. That doesn't make a whole lot of sense. It's pretty obvious in this screen shot where Shumate should be.  Don't' forget Cody Riggs also has deep coverage just off the screen (green arrow).

What happened? The big picture 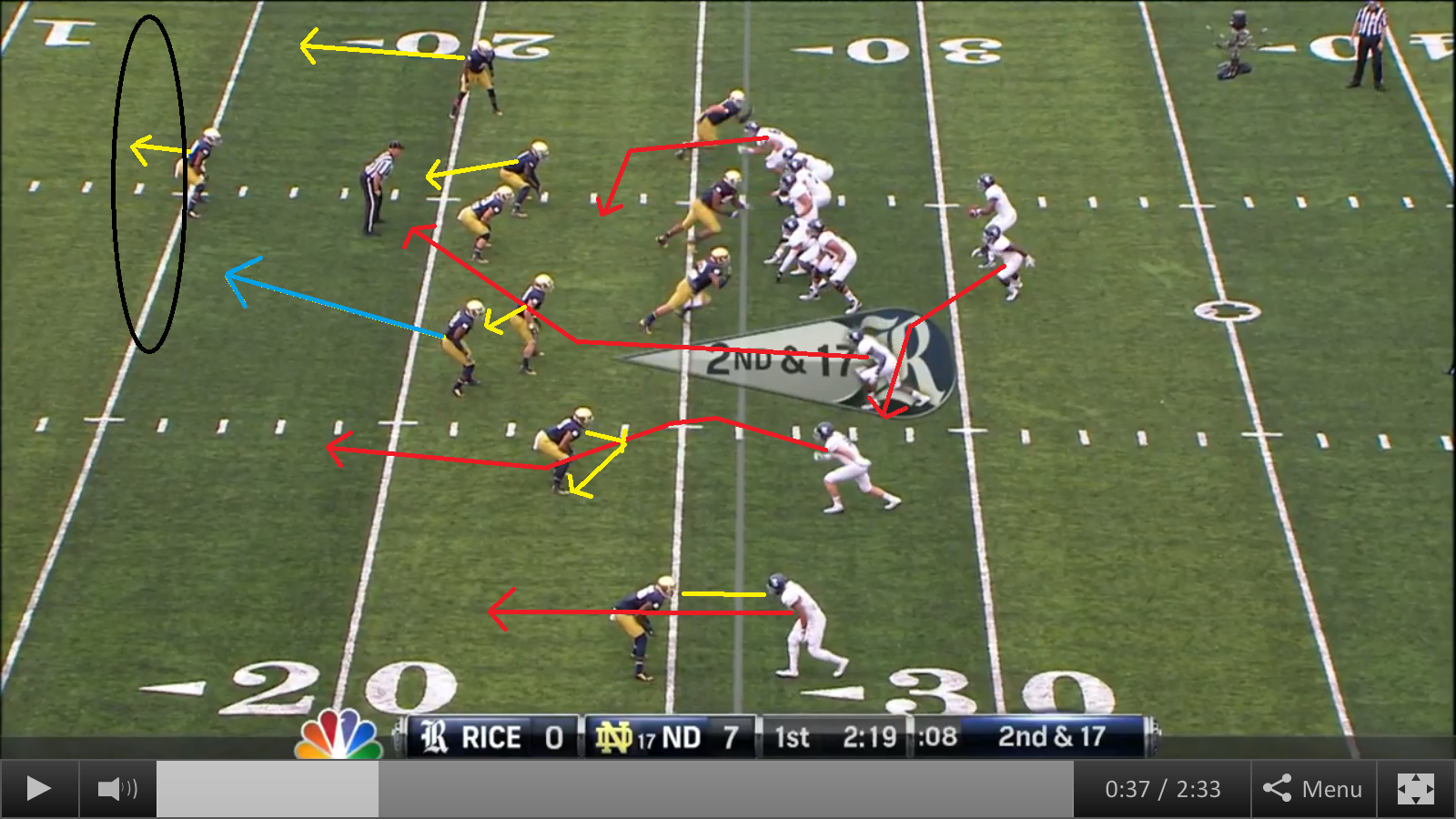 The blue arrow tells the story. Shumate is out of position.

The video provides us with a little more evidence as to what went wrong. Watch Shumate. Intially he is lined up in perfect position to provide help over the top. Just before the snap of the ball, he abandons that position and moves closer to the line of scrimmage.

It looks to me like he thinks he has the inside receiver in man coverage. Post snap, Shumate follows this receiver towards the middle of the field and then realizes too late the rest of his teammates are playing zone.

I'm not sure why Shumate switched from playing zone to man just before the snap. It may have been an automatic check that he failed to communicate. Or it might have just been a straight up mental error. Regardless, it didn't work out very well for the Irish.

Matthias Farley took some abuse on Twitter for this play. It is possible that this was some sort of wildly complex pattern matching scenario, or automatic check where Farley should have covered the vertical route. Of course that would mean that the running back would be wide open on the underneath route and that the deep coverage would be designed to have 3 players covering a part of the field with no receivers, while leaving two vertical routes matched up one on one with no safety help. Given all that, it seems reasonable to suggest the most likely explanation is Elijah Shumate made an error.

If you play straight zone or straight man, it's fairly easy to have everyone on the same page. When you play coverages that mix in both concepts, the potential exists for this type of error.  Hopefully the Irish can get their coverage straightened out before the Michigan game. If they don't, even a coach without a headset will be able to exploit the holes in the secondary.