New faces will appear in the return game.

Notre Dame returns from the bye week to face off against a Syracuse team that is coming off a loss to Maryland.  How does the Syracuse special teams look? Here is a review.

This is arguably the best kickoff unit, in terms of coverage, that ND may face all season.

Cole Murphy has taken all 15 of Syracuse's kickoffs this season thus far, booting them for 869 yards, an average of 57.9 yards per kick.  4 of these 15 kicks went for touchbacks, and 2 went out of bounds.  This means that of Murphy's 15 kicks, 9 of them were returned.  These returns went for a total of 132 yards, an average of 14.67 yards per return, with a long of 23, which came at the hands of Stefon Diggs from Maryland last week.

Against Maryland, Syracuse employed a variety of squib kicks and deep kicks.   They also cover very well and are able to shed blocks effectively.  Despite this incredibly large amount of kick returns allowed by Syracuse, they are tied for 4th in the country in Kickoff Return Defense.

With Amir Carlisle's injury, Greg Bryant will most likely get the majority, if not all, of the kickoff returns in this game, though I could also see Cam McDaniel taking a couple as well.  However, Syracuse, despite the large amount of kick returns allowed, is currently tied for 4th in the country in Kick Return Defense.  Think about that; Syracuse allows returns on a majority of their kickoffs and STILL manages to hold teams to short yardage.  Stefon Diggs is ranked 10th in the county in kickoff returns and Syracuse was able to keep him contained.  Notre Dame, in order to give either Bryant or McDaniel a chance, is going to need to hold blocks and play smart.  Syracuse's kickoff team is well coached and able to effectively compensate for their kicker's weak leg.

Kyle Brindza is going to handle all of the kicking duties on Saturday, barring some sort of disaster.  This season, Kyle has booted 22 kickoffs for 1,418 yards, an average of 64.5 yards per kick.  An unbelievable 17 of these have gone for touchbacks with 2 out of bounds.

Syracuse freshman Ervin Philips is going to be at the receiving end of Brindza's kicks.  With possible weather implications, he may get some opportunities to return kicks, however that would be a surprise, considering Brindza's success thus far with touchbacks.  While Philips is a running back, he has not had much success kick returning this season.  Philips has taken 10 returns for 202 yards, an average of 20.2 yards per return, and a long of 31, good enough for 89th in the country.  This is not the worst in college football but it is also far from the breakaway threats that ND saw last week against Purdue.  Barring any sort of massive breakdown that we have not seen this season, Notre Dame should have no problem with Philips.  He has unbelievable potential but right now, I have a hard time seeing him have much success against ND's kickoff unit. 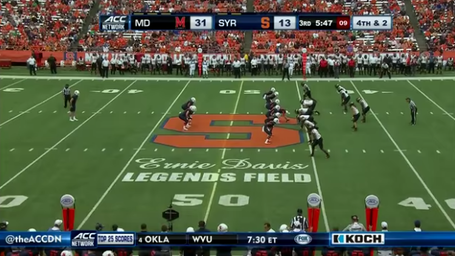 The long return against Syracuse's punt team can be viewed here--apologies for no embedding, as ESPN is the only site that I could find that has the video.  This went for a TD.  I also added no markups to these screenshots because they, for the most part, speak for themselves. 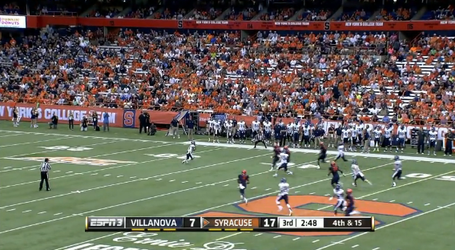 Here is the Villanova return man catching the ball with three Syracuse players, unblocked, running towards him.  The Villanova man has 7ish yards to work with. 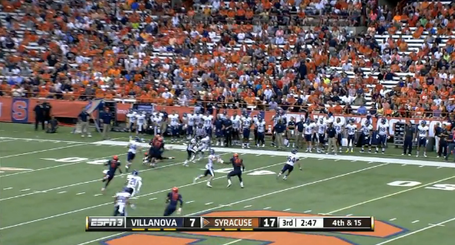 And with a combination of a great cut and horrendous angles taken by ALL THREE Syracuse men, the Villanova punt returner has the entire sidelines to run, with one lead blocker. 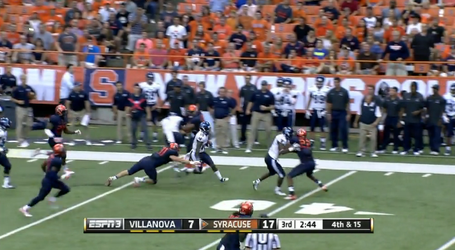 The sidelines lane closed but a lane to the inside opened up. 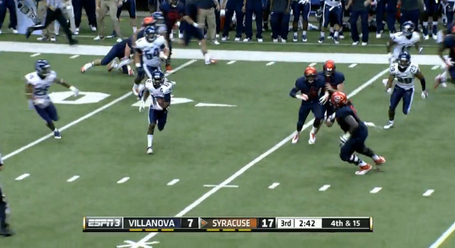 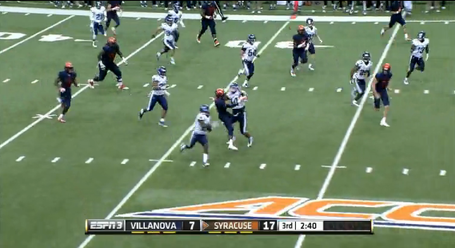 And with one final, absolutely fantastic, crackback block, the touchdown is sealed.  After this block, there was nobody within 5 yards of the return man.  What an absolutely fantastic return.  It had great cuts, great blocking, and great vision.  It also had terrible angles and decision-making from the punt coverage unit.  Dixon outkicked his coverage and Syracuse absolutely failed to take proper angles.  Despite the talent gap between Syracuse and Villanova (yes, I know, Villanova almost won, but Syracuse has better athletes, in my opinion), Villanova was able to return this for 67 yards and a TD.  Given the total amount of yards allowed by Syracuse's punt team, this is a major problem.  It is one where ND can gain a huge advantage.

Notre Dame will look to take advantage with a combination of Cody Riggs and Greg Bryant, with Riggs likely getting a bulk of the returns, if not all of them.  Both are averaging over 10 yards per return.  If Notre Dame has any advantage in this game, it will be on the punt return.  The return team, though, has gotten progressively worse this season.  After returning 5 punts for 80 yards against Rice, ND regressed against Michigan, returning 4 punts for 26 yards and only 1 for -5 against Purdue.  ND needs to return to the disciplined returns and blocking that helped them against Rice.  My expectations are very low, though, and I will hopefully be proven wrong after the game on Saturday.

Syracuse's primary return man on punts is Brisly Estime, a sophomore wide receiver.  He is much better than his kick returning counterpart, having 6 returns on the year for 58 yards, a long of 22, last week against Maryland.  Estime is a dangerous player and while young, is currently sitting at 36th in the country at punt return.

Brindza will be booting the ball to him this game, having taken all 13 punts on the season for the Irish.  Brindza has an average of 43.6 yards per kick and a long of 55.  Brindza, I argue, is one of the best punters in all of college football, and this is going to be an exciting matchup this game.

Syracuse's primary field goal man is Ryan Norton.  Norton is spotty this season, only 4 for 7 with a long of 38.  Cole Murphy, the primary kickoff man, took Syracuse's long attempt of 49 yards against Maryland and drilled it.  This is an enormous liability for Syracuse and one that ND can take advantage of.

As you can see from the screenshots above, the punt return is arguably the second part where ND can take advantage.  Syracuse's punt coverage unit is unbelievably porous.  They do not take good angles, they do not make good decisions, and this is an enormous liability.  I am hoping to see ND return a long one this weekend.

As always, I welcome your questions and comments below.