This week's Five Wide Fullbacks column brings you all the fake news that's fit to print.

Share All sharing options for: Five Wide: News Regarding ND's Marooned Five and Other National Stories

In this week's Five Wide column, Mouth updates you on the five most pressing stories of the week.

Amnesty International and Human Rights Watch reported this week that they are examining the case the five Notre Dame football players that have been suspended due to allegations of academic dishonesty.  The Marooned Five, formerly known as the Four (Summer) Coursemen, are being held without trial on Notre Dame's campus.  In a statement released this week, these two NGOs announced that they were forming an NGO coalition, or a "Super-NGO" solely for the purpose of combating the injustices suffered by the suspended five. 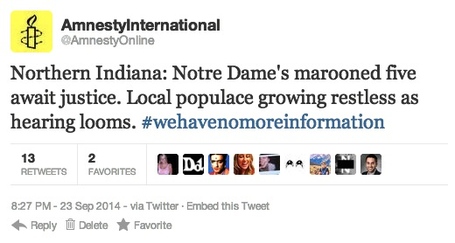 "The ebola crisis in Liberia and west Africa is pretty well covered.  Anti-Christian atrocities in Nigeria-check, nailed it.  ISIS's anti-everyone-who-isn't-a-murderous-thug atrocities in Syria and Iraq are pretty well in hand.  But this situation with The Five is just...  Horrifying.  There aren't words.  We need to act now," said a tearful Amnesty International Secretary-General Salil Shetty in a Wednesday morning press conference.

U.N. Secretary-General Ban Ki-Moon praised the new NGO coalition, and said that the U.N. Security Council is considering military action.  For its part, NATO is considering strategic air strikes and humanitarian aid drops.  It has ruled out "boots on the ground" as of now.  Kofi Annan, Deputy Chair of the peacemaking group The Elders, expressed his sadness at the treatment of the Five: "Mandela was one thing.  But these kids, these ... these children have been suspended from team activities without trial or due process of law.  They have summarily been presumed guilty.  The investigation of their activities concluded in July.  It is now nearly October and there is no sign of justice.  Free The Marooned Five."

The American Red Cross has apparently declined to get involved at this point, citing the players' apparent state of good nutrition, as evidenced by a Davaris Daniels tweet indicating that he was "so hype right now," apparently a reference to a steak he was about to consume.  Further, Senior linebacker Kendall Moore's beer gut is apparently still mostly intact.  And Head Coach Brian Kelly has publicly stated that he would provide material support to the five: "I think they should be able to eat."

Florida State University starting quarterback Jameis Winston, widely regarded as bastion of social conscientiousness and responsibility in a sport not known for either, announced this week that an obscenity he shouted the week of the FSU-Clemson game was intended as an act of poignant satire.  Winston claims to have been lambasting the immoral treatment of women prevalent among football players.  High profile domestic violence cases involving former Baltimore Ravens running back Ray Rice and other NFL players, and an alleged assault by University of Oklahoma Freshmen running back Joe Mixon on a woman have brought these issues into the public spotlight recently. 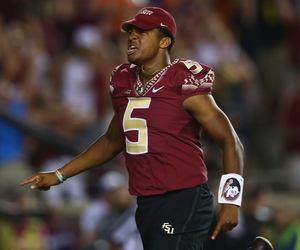 Winston, college football's preeminent advocate for respect for women, regards himself as a guerilla artist in the tradition of such luminaries as Banksy.  But his performance art focuses more on taking stands for the dignity of the human person generally, and of women in particular.  Winston had this to say on the matter:

On civil disobedience: was it Gandhi, Dr. King, or Henry David Thoreau that said that "under a football program which imprisons any unjustly, the true place for a just player is also a prison"?  Taking a stand for women is unpopular right now in football circles, but if I need to sit the bench to make the point and shock people out of their comfort zones, I'll do that and I'll do it gladly.

Winston placed the same civil-disobedience-as-performance-art context around a December 2012 sexual assault accusation against him.  Likewise, Winston claimed that a May 2014 incident in which he was accused of stealing crustaceans of various stripes was an act of protest against an unjust culinary-industrial complex that overfishes naturally occuring shellfish populations to satiate America's "bloodlust" for seafood.  "I did it.  You damn right I did it.  I wanted to return those poor tortured crawfishes to their natural habitat.  And to eat those delicious crab legs.  Mmm mmm.  Uhhhh, I mean, AHEM, ahem.  This interview is over."

In an unprecedented exercise of his authority as University of Texas Head Football Coach, Charlie Strong has dismissed a number of individuals who are not University of Texas football players.  The dismissed persons are not affiliated in any way with the University of Texas.  Many do not even reside in Texas.  Yesterday Strong held a press conference announcing the dismissals: "This is the State of Texas.  Football is king.  As Head Coach of the Texas Longhorns, I'd be remiss in duties if I didn't hold the entire State of Texas-and heck, everyone else-to the standards we set as Texas Longhorns."  This news comes in the wake of Strong dismissing the ninth Texas football player of his brief tenure as Texas Head Coach on Tuesday. 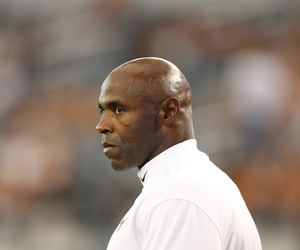 But Strong has apparently decided that he's "had it" with violations of team rules by non-players as well.  "People will no longer be able to hide behind ‘not being part of the Texas football program,' or ‘not residing in Texas,' or ‘being elected officials over whom I have no authority or jurisdiction whatsoever and whose dismissals raise as yet uncontemplated Constitutional issues.'"

Strong pulled no punches in discussing the reasons for the dismissals.  Texas Governor Rick Perry has been indicted, embarrassed himself and the State of Texas in the 2012 presidential primary debates, and is an Aggie.  Also, "[Lieutentant Governor] Greg [Abbott] is ready to step up and lead the team.  I heard somewhere the expression ‘Next Man In."  Well we're a ‘Next Man In' state now."  The Texas state legislature is a state legislature.  Kevin Sumlin's offenses: coaching the Texas A&M Aggies and putting up with Johnny Manziel's antics.  Manziel?  "He just continues to Manziel.  His only saving grace is that he's not Winstoning."

One Foot Down Blogger Mouth of the South's "schtick is old and whack," Clearwall's "off field altercations during a recent trip to the ND Shamrock Series Game in Indianapolis are a disgrace," and CleverScreenName "just, I mean, come on.  We will not tolerate such inveterate line stepping."

University of Texas Law School constitutional law professor Jeffrey Abramson declined to comment on the constitutional, administrative, civil, and NCAA governance implications of Strong's latest round of dismissals.  Abramson said only that he would continue to "keep his head down and give 110%, and, you know, there ain't no ‘I' in ‘constitution.'"

Clemson Head Coach Dabo Swinney admitted late Tuesday that Clemson's ill-fated fourth down conversion attempt against Florida State was the latest in a series of elaborate pranks by which he has been "trolling" his team's fan base and the country writ large.  "Yeah, I totes LOL'ed at that one.  You should have seen all of your faces.  Y'all were all like ‘WHAAA? Ohhhh NOOOO'  I mean, I guess some people are a little slow on the uptake and might not get intelligent humor or whatever, but like ... whatever." 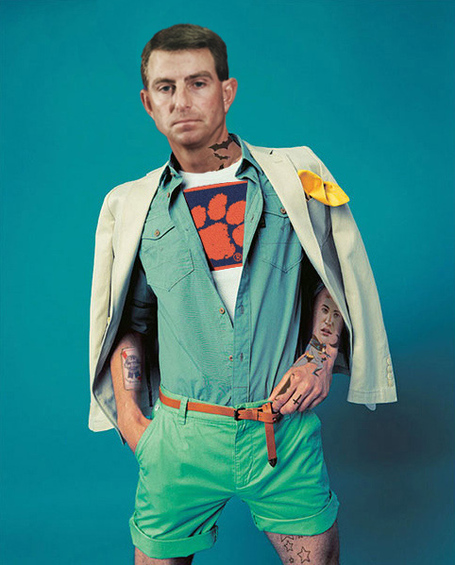 Dabo Swinney-embarrassing Clemson on national television before it was cool.

Swinney continued, insisting that gag went over the heads of the entire country.   "Here's you [gesturing].  And here's the joke [gesturing higher]."  Swinney insisted that Florida State bit hardest on the joke.  "Did you see Eddie Goldman?   I mean he LITERALLY tried to tackle the running back in the backfield.   And worse, their other two players ACTUALLY TACKLED HIM.  I mean, it's like, quit trying so hard, or whatever.  I mean did you think that was a serious fourth down attempt?  You do realize that if we didn't convert that fourth down, the game was LITERALLY over, right?  Just checking."

Swinney further claimed that his team's comically inept fourth down face plant was only the latest in a series of Kaufman-esque "trollings" spanning multiple states and football seasons.  His putative national title contender 2013 team's 51-14 loss to Florida State was "classic Dabo, really high-level meta stuff."  Losing to Florida State and in-state rival South Carolina by double digits in 2012 and 2013 was "hilarious if you get his brand of humor."  And Clemson's 2011 season?  "Uhhhh, that's the joke, guy.  Insert Ranier Wolfcastle gif here."  Swinney continued "I mean, has anyone ever heard of Clemsoning?  I mean, not to take credit or anything, but I started that."

Vatican officials today confirmed that the University of Notre Dame has suspended Pope Francis from all team activities related to his duties as Supreme Pontiff amidst allegations of academic dishonesty in connection with Francis's publication of his first major encyclical, Lumen Fidei.

Francis, otherwise known as Jorge Mario Bergoglio, is not a student of the University, thus he is not protected by FERPA.  The Notre Dame administration therefore released what it referred to as a "smoking gun e-mail," which it uncovered in combing through years of Bergoglio's e-mails:

In the wake of these shocking allegations, Notre Dame President Father John Jenkins noted that the recent synod on the family and any other papal victories achieved after the alleged dishonesty involving Lumen Fidei might be "vacated."  Jenkins insisted that "justice would be swift" and that a hearing would occur "shortly."  Jenkins did not respond as of press time to questions about the questionable legitimacy of the University's action given that Lumen Fidei was openly released as a co-authored effort from Francis and Benedict and thus violates no extant honor code.