We take a look at one play the Orange will use very often on Saturday, and how the Irish can stop it.

There's a triple option team coming up on the schedule that you may not have known about. The Syracuse Orange run a hurry-up no huddle, run-first spread offense, and have adapted triple option principles for one of their core offensive plays. With Terrel Hunt at the helm, they look to have him running downhill at the defense  as often as possible, and are attempting to give him the tools to do so.

Let's take a look at the core offensive play of the Orange, which they ran vs Maryland over 20 times (yes, I counted). Sounds familiar for many people who watch triple option teams on a regular basis. As Coach Herman Boone says, "It's like novocaine. Just give it time, it'll work."

Inside Zone Read Option with Backside Bubble (a.k.a. The Syracuse Offense)

There is the play, in all its glory. It is a pretty standard inside zone read option, where the QB is reading the backside defensive end to determine if he will hand the ball off to the RB. If the end crashes down the line, the QB will keep; if the end stays home, the QB will give to the RB. Where this play differs from basic read options is the backside bubble screen that is added onto the play. Many spread offenses that rely on the read option have been adding this "extended pitch" read for the QB to make it a true triple option play. The QB will read the force defender (nickel back in the above diagram), and make the "pitch" if the force collapses onto the QB; and keep if the force stays wide with the bubble.

Let's take a look at Syracuse running this play back-to-back on a 2nd Quarter drive vs Maryland:

This play is pretty effective with  the right reads by the QB, but there are several things the offense can do to attempt to work around the defensive adjustments if they start taking things away.

If the backside corner is tight to the line working to take away the bubble at all costs, the offense can fake the bubble and throw over the top:

If the defense is shifting to the run side of the formation and possibly walking a safety down to stop the RB, the offense can shift into a power read instead of a zone read:

Finally, one of the more interesting adjustments made by the Orange last Saturday was to motion their slot receiver into a wing position and horn block the scraping linebacker. This is a common tactic to stop the scrape/exchange defense of the zone read, and is extremely effective when the 2nd slot defender is occupied by the bubble screen: 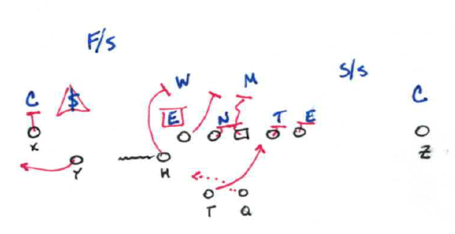 With Syracuse having their core play at the ready, how could the Irish possibly defend this on Saturday? I personally see two quick fixes and one adjustment that can be made against the Orange. The first fix would be for the Irish to play man on the outside receivers of any 3x1 formation. To the bubble side, this would mean staying strong at the point of attack on the outside stalk block and limiting the space should the #2 receiver get the ball. To the single WR side, it will allow the strong safety to come up near the line of scrimmage to make any give to the running back a 4v3 advantage for the defense on the playside. The second fix would be to align the defensive front's strength away from the running back/trips. In watching the film, I saw very few runs to go against the usual flow of runs from the shotgun formation. This alignment will do two things for the Irish: first, it will allow Jaylon Smith (Will backer) to play near the trips side of the formation (if there's anyone who can cover a QB run and bubble screen at the same time, it's probably Jaylon Smith), and it will allow the Irish to play scrape/exchange defense on the backside of the formation to limit QB runs. Here's the basic idea for how the scrape would look: 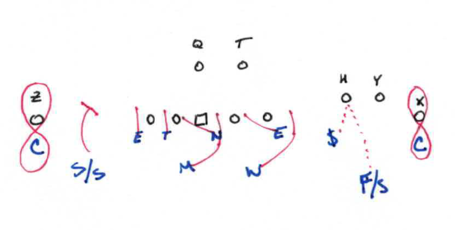 Ideally, the QB will keep and run directly into a scraping Jaylon Smith. If he does throw the bubble, however, it will be up to the corner to keep contain until the free safety and nickel back can rally to the ball. The adjustment for this defense from Syracuse will be the play we looked at above. The #3 receiver will motion into a wing back position in order to horn block the scraping defender. This is where the adjustment for the Irish will prey on a tendency shown by the Orange. Instead of playing  scrape/exchange defense, when the Irish see the slot motion into the wing, they will play straight gap control defense. The backside end will pressure the mesh point by aiming for the QB's upfield (back) shoulder. If the QB keeps, the end should be able to make enough of a play to stop it dead in its' tracks. If the QB gives, the Strong Safety will have come up to the line to again give the Irish a 4v3 advantage. If the nose guard is able to take and hold on to a double team, it can allow the Mike backer to remain free and flow to make the tackle: 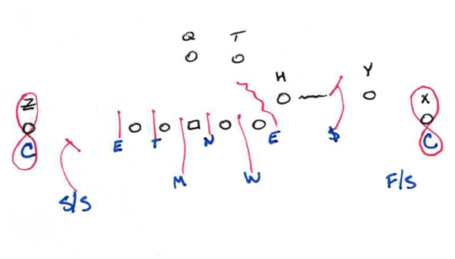 The final adjustment that the Orange will make after seeing how ND plays the wing formation will be to run the power read out of it. That is where Jaylon Smith will have to make an individual play, read the pulling guard and beat the Orange running back to the hole.

As with any triple option scheme, it is difficult to defend, and there is almost always one defender in conflict somewhere in the play. With the adjustments I've described above, as well as some solid individual efforts (especially across the defensive line), the Irish will have the ability to stop Syracuse's core play cold and get the ball back into the hands of Everett Golson. Keep an eye especially on Jaylon Smith and Matthias Farley (or whomever is healthy enough to play nickel back) in the read option game. They will be called on to make some big stops against QB runs and bubble screens.