Notre Dame's backup quarterback made a splash on the very first snap of his career. We break it down in the OFD Film Room.

With 12:48 to go in the fourth quarter, I was annoyed with Brian Kelly.  The score was 38-10 and Everett Golson came back on the field.  I was further annoyed with Golson spent almost the entire drive handing the ball off to Tarean Folston.  "Why," I said to no one in particular, "isn't Malik Zaire in the game?  Isn't he capable of handing the ball off?"

My annoyance turned to frustration when the Irish second-string defense allowed Rice to methodically march down the field.  The final score was going to be 41-10 and Malik Zaire wasn't going to see the field.

But then a busted coverage in the secondary made the score 41-17 and Zaire made his first appearance.    Today's Iso Cam highlights Zaire's 56-yard scamper on the first play of his collegiate career. 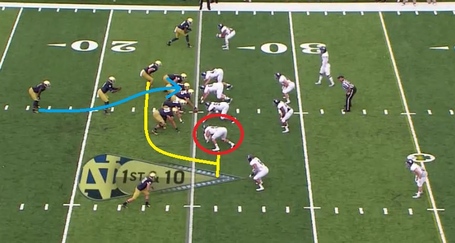 Zaire lines up in the pistol formation with fellow sophomore Greg Bryant behind him.  The play is an inside zone read.  The defensive end (red circle) is the read player.

Chris Ault, architect of the pistol offense, calls this type of inside zone read play "Bluff."  That's because the running back and quarterback turn away from the direction of the play.  This allows the quarterback to read the backside defensive end and adds a little bit of misdirection to the play. 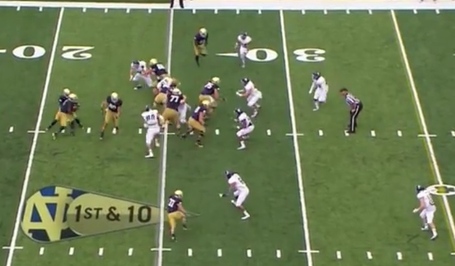 Notice how Bryant (blue arrow in the first picture) begins on Zaire's right side though the play is an inside zone run to the left.  The defensive end turns his shoulders towards Bryant, giving Zaire an easy "keep" read.

Smythe, however, is not blocking the defensive end.  He is looping around him to block a linebacker.  This is to stop a common defensive counter to the zone read - the "scrape exchange."  In the scrape exchange, the defensive end crashes down on the running back, giving the quarterback a "keep" read.  At the same time, a backside linebacker "scrapes" over the top and "exchanges" his position with the defensive end.  If all goes according to plan, the quarterback will run right into the waiting arms of the linebacker.  Smythe acts as lead blocker for Zaire in case Zaire keeps the ball and can block any scraping linebackers.

I also want to point out how great the blocking is on this play.  Matt Hegarty and Colin McGovern bury the defensive tackles while Hunter Bivin and Matt Harrell release to the linebackers.  This is zone blocking at its finest. 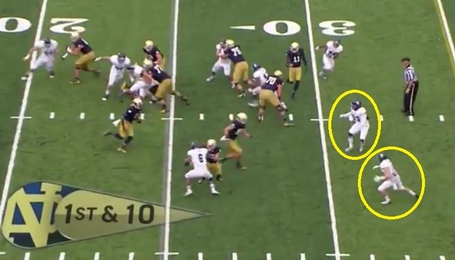 Speaking of great blocks, walk-on wide receiver Eric Lee does a fantastic job of sealing off the defensive back and giving Zaire room to run.

Smythe is still leading the way for Zaire, but he is now facing two unblocked safeties (yellow circles). 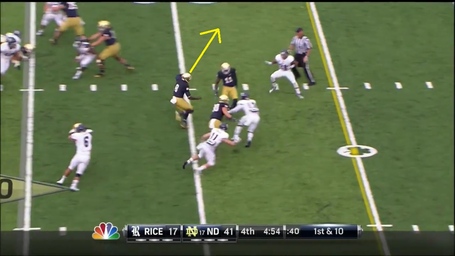 However, one safety keeps contain to the outside while the other overpursues to the outside.  Justin Brent enters the picture and seals off that safety.  The corner following Brent also overpursues and Zaire easily cuts around him towards the middle of the field.  From there, it's off to the races.

For me, this might be the most exciting debut since Cierre Wood ripped off about 40 yards on 4 carries against Purdue in 2010.  You can't help but love the speed and athleticism Zaire showed on his run.  Unfortunately Zaire only managed a handful of snaps and never put the ball in the air.  With any luck, the Irish will have a few more blowouts this season and we'll get to see more of Malik Zaire.