What is wrong with the Irish run game?

The Notre Dame offense is a lot like the Titanic. A modern marvel, built upon a combination of speed and grace that creates a sense of invincibility. Yet danger lurks below the surface. A lethargic run game threatens to be the iceberg that ultimately sinks a promising season.

The run game has a number of serious issues. The two most critical? Poor play from the offensive line and schematic flaws that make it relatively easy for opposing defenses to attack the Irish run game. Let's take a look at the film and I'll show you what I mean.

One play, a lot of problems

I re-watched pretty much every run play Notre Dame called against Purdue. I could spend hours breaking down each play, but none of us have time for that. Instead we'll examine a play that highlights the most critical issues with the Irish run game. 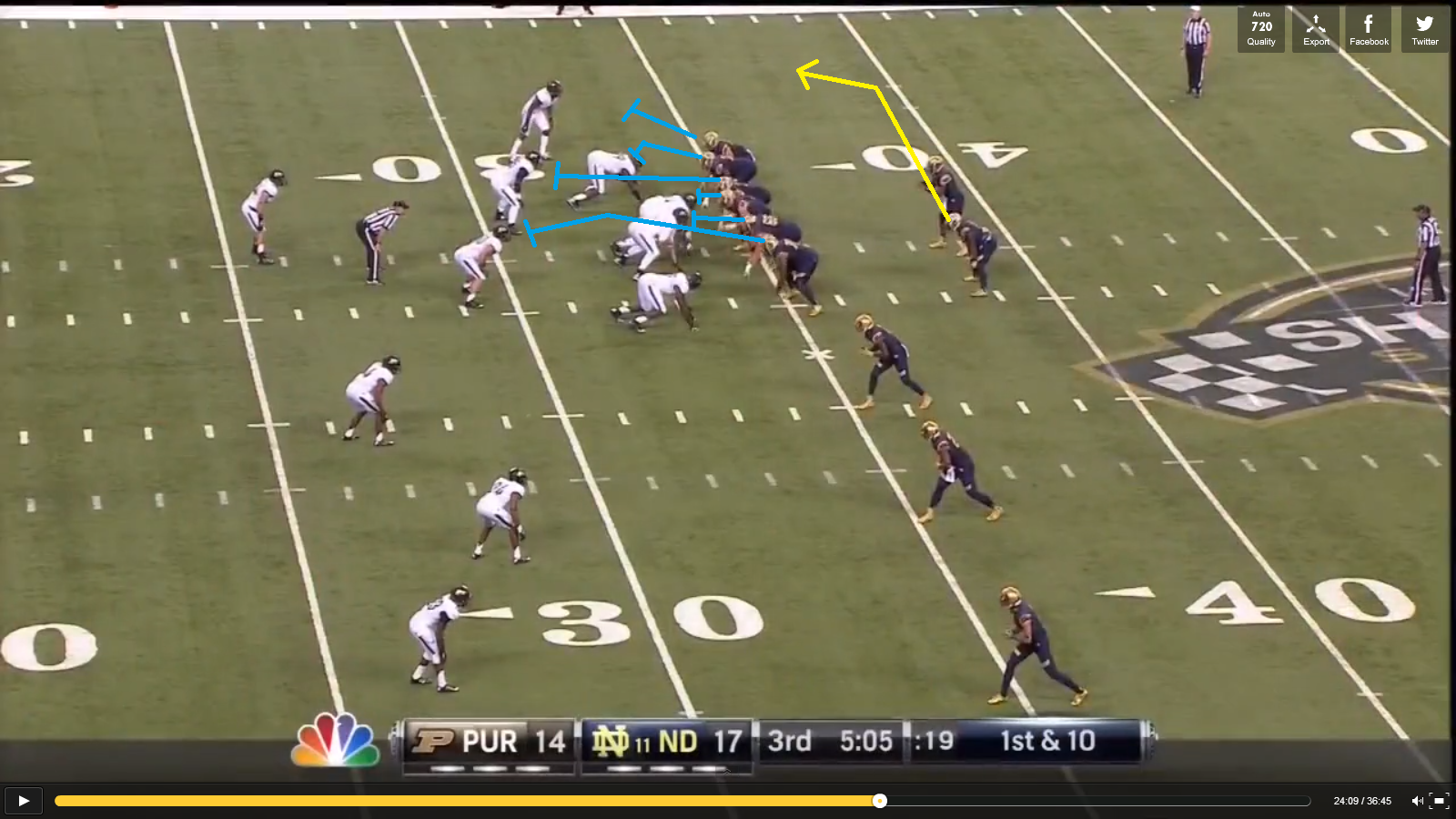 1st and 10, Greg Bryant (# 1) will try and get to the outside (yellow line). The numbers are good. There is a blocker for every defender in the box (blue lines), except the backside defensive end who will be accounted for by Golson's fake off the zone read.

Problems with the interior 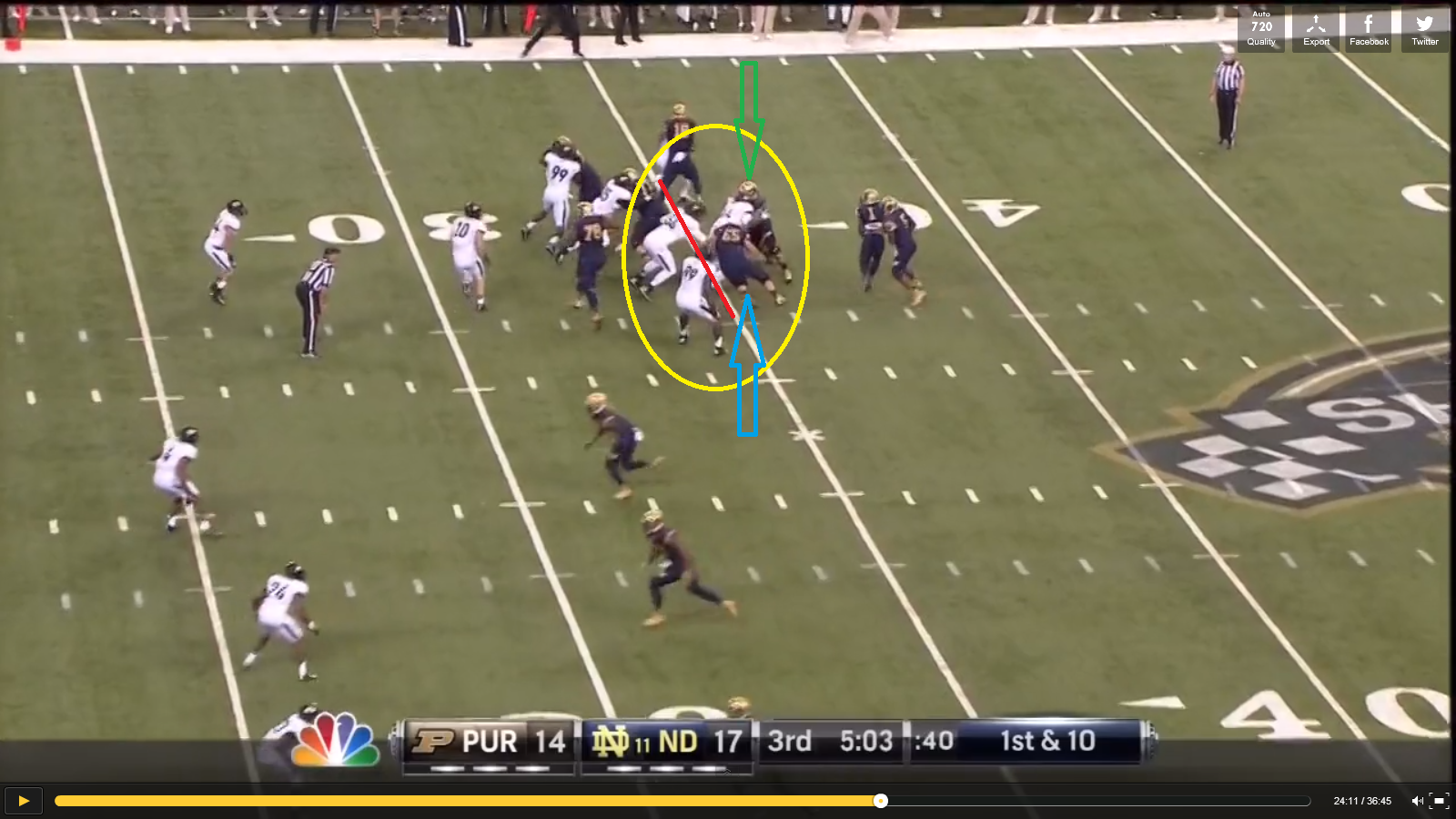 A fraction of a second after the snap. We see a significant problem with the interior of the offensive line (yellow circle). Conor Hanratty (#65, blue arrow) almost instantly loses inside position and is left to try a desperate cut block. Even more concerning is Nick Martin (# 72, green arrow). He started around the red line but has been blown back a couple of yards.

This is an outside run play, so the interior getting blown up isn't a huge issue in this case. The problem is, this isn't an isolated event. The guard-center-guard combination for the Irish got beat consistently against Purdue. 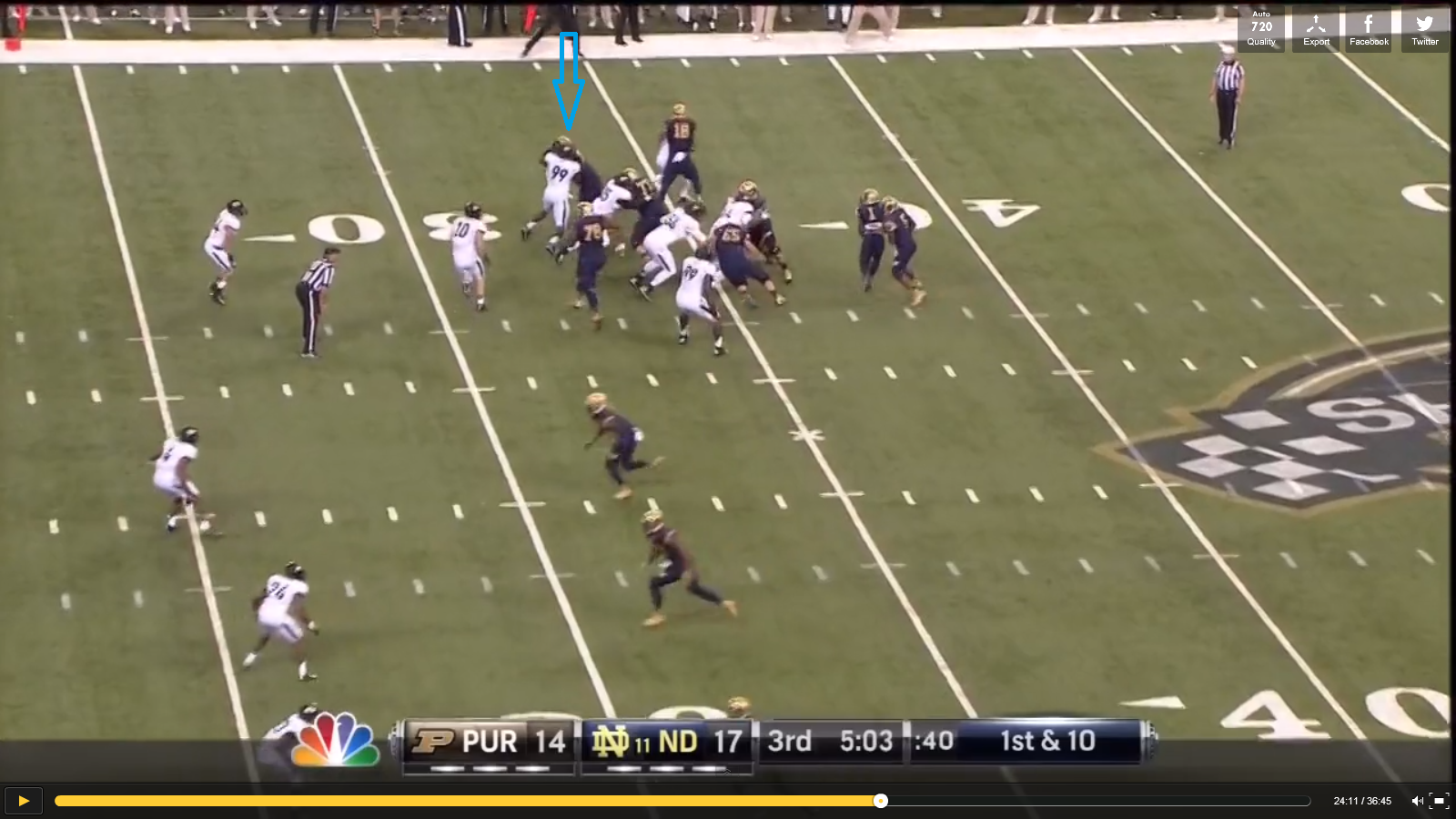 Another recurring problem with the offensive line is their inability to maintain blocks. In this screen shot we see offensive tackle Steve Elmer (# 79, blue arrow) in good position against Ryan Russell (# 99) of Purdue. If he can maintain the block, this play has a chance of being successful. 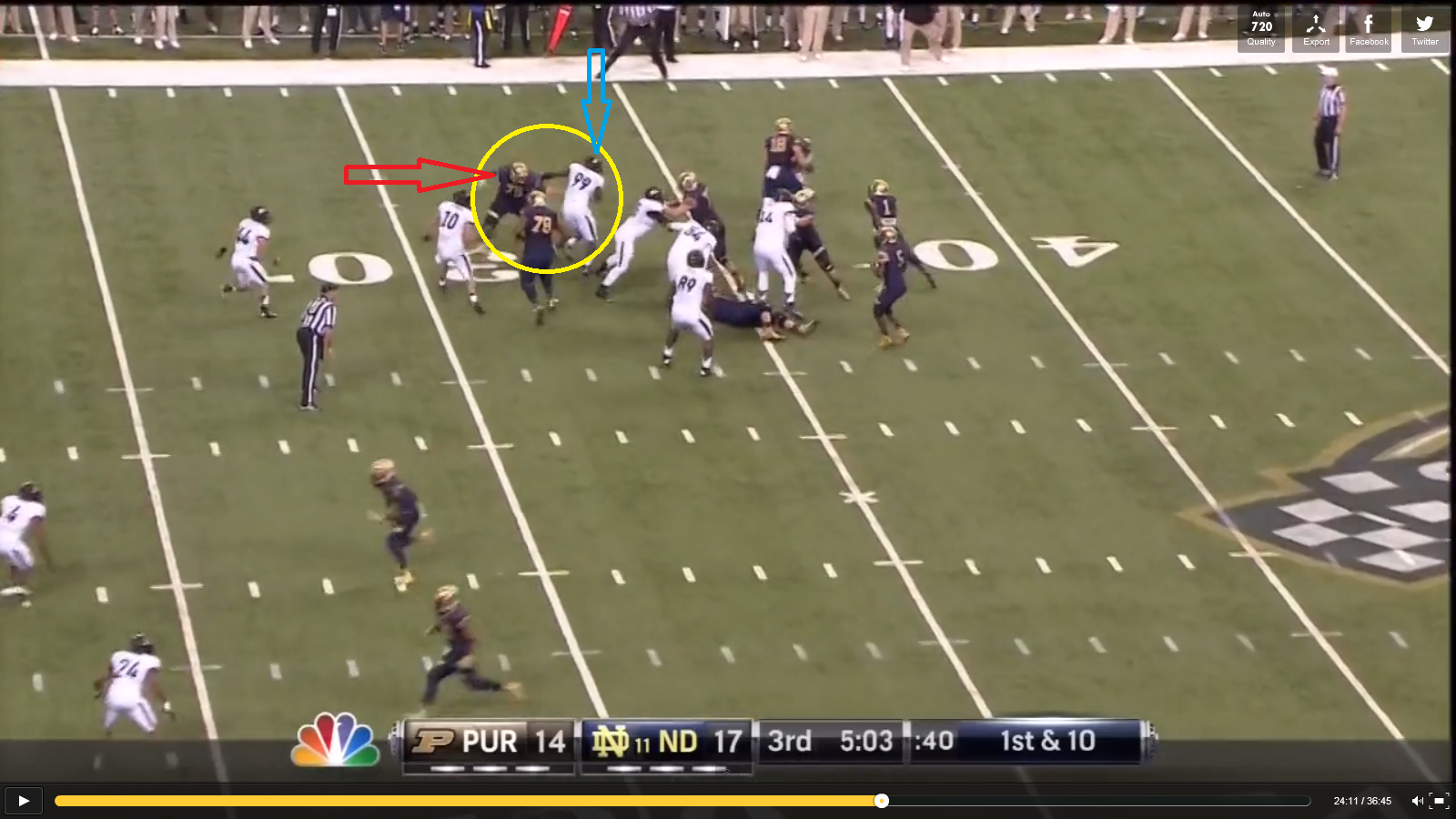 Elmer (red arrow) has lost the block, giving the defender (blue arrow) a clear path to the ball carrier. It's obvious who the culprit is on this play, but every offensive lineman was guilty of this type of error at some point in the game. They tend to start off in good position but can't finish the block.

While I only broke down a single play, the issues I highlighted here have plagued the Irish. The offensive line has done a poor job of maintaining blocks. My biggest concern is that many of the mistakes aren't mental, they are physical. The Irish offensive line is simply getting beat. That's not good. Coach Heistand has his work cut out for him this week.

Problems with the scheme

Brian Kelly reportedly met with Harry Heistand this week to have an in-depth conversation about the play of the offensive line. There's little question they're not playing well. However, coach Kelly also needs to look in the mirror. The run scheme is flawed and opposing coaches have figured it out. 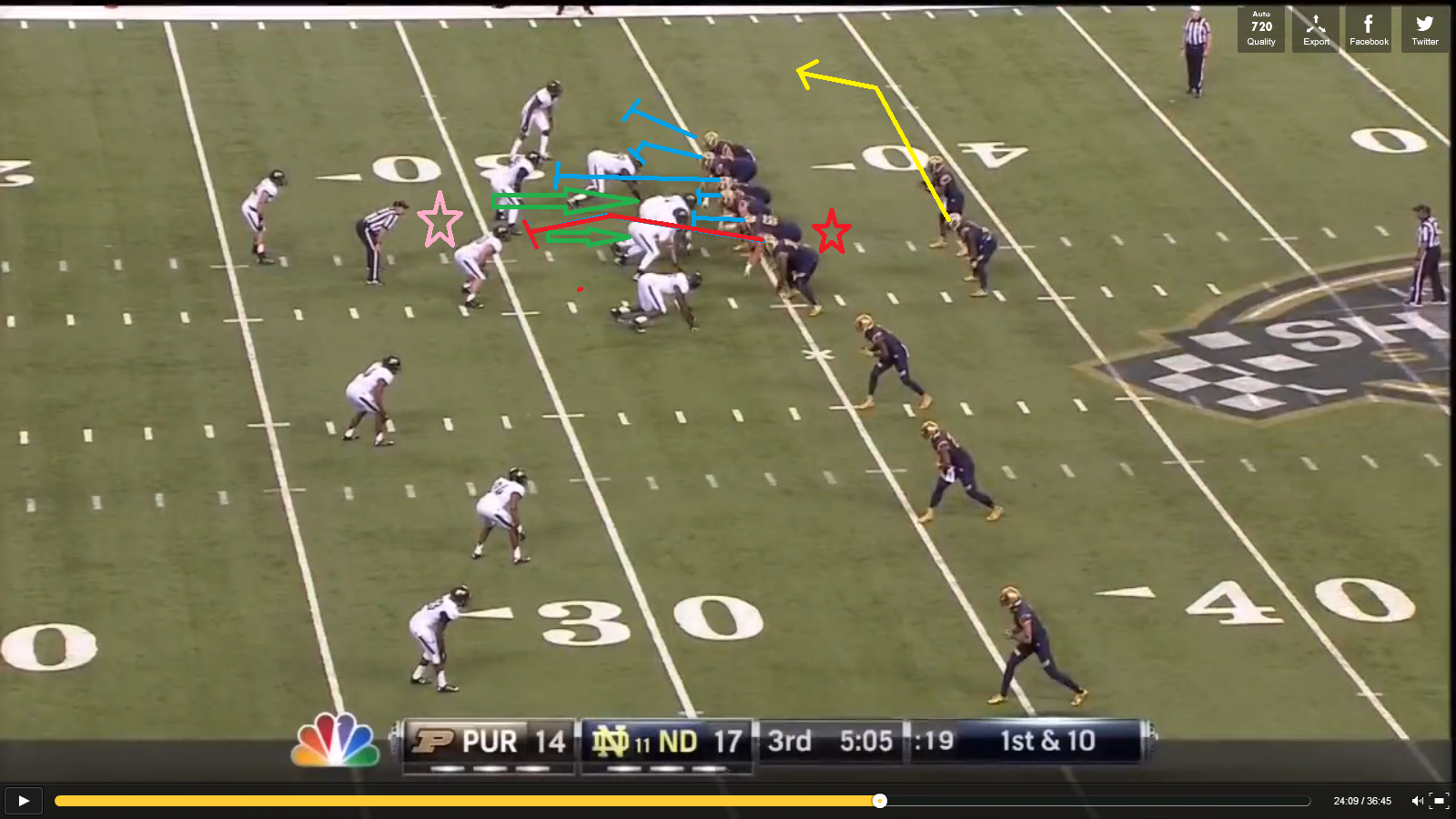 On a number of occasions, Purdue aligned their defense so at least one of their linebackers would be almost impossible to block with the scheme Notre Dame was using. This was accomplished by covering the center and one of the guards with defensive linemen (green arrows). This alignment prevents these players from getting to the second level and blocking the linebacker Sean Robinson (# 10, pink star). This is where the flaw in the scheme shows up. The backside tackle # 78, Ronnie Stanley is responsible for blocking Robinson (red line). This will be a very tough block to make. 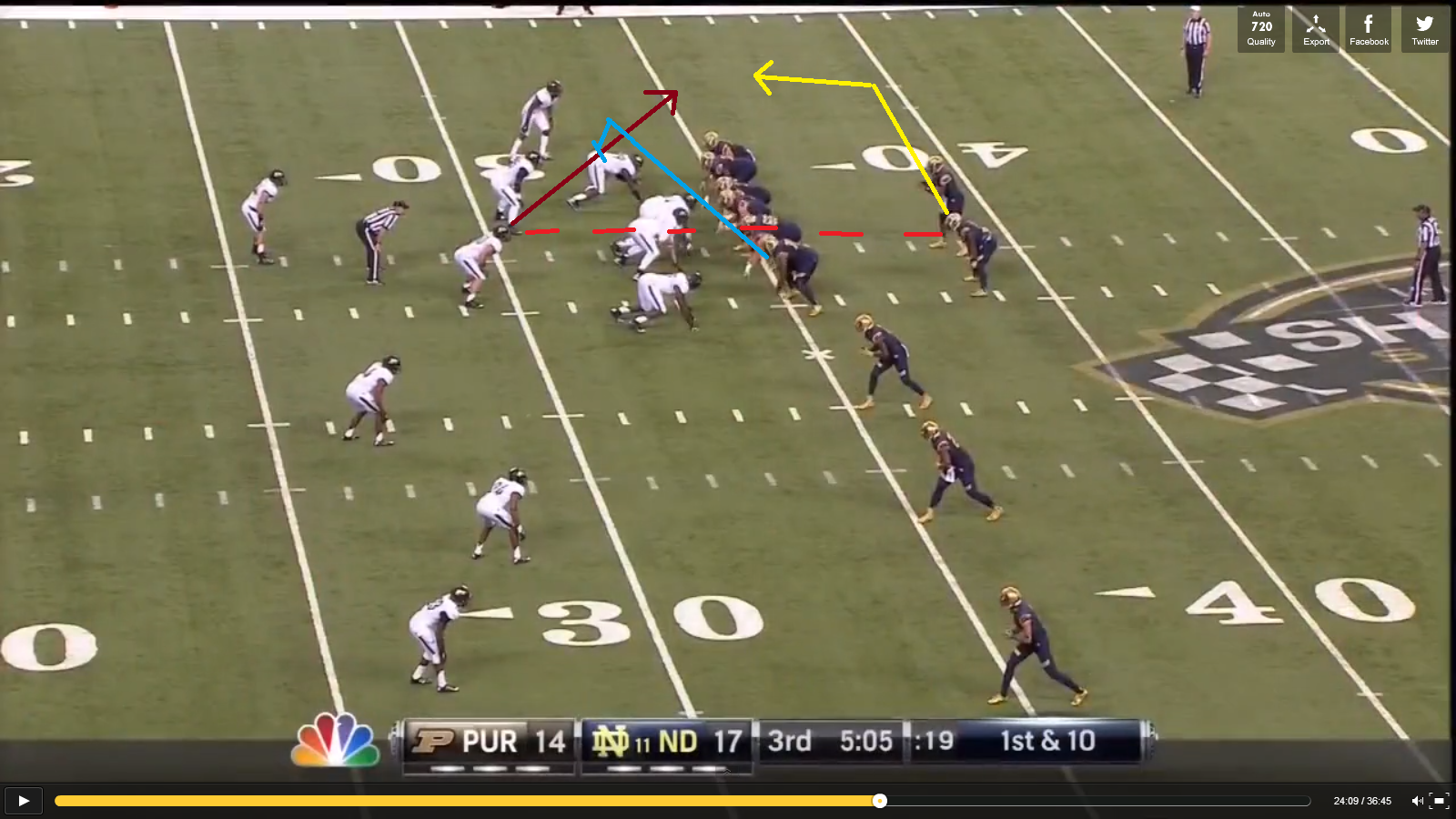 Robinson's read is pretty simple. Follow Greg Bryant (red dotted line) and take the most direct angle to make the tackle (crimson line). Somebody needs to block him or he'll have a field day.

To make this block Stanley must sprint across the formation, (making sure he doesn't get caught up in all the traffic) and out run the smaller, faster linebacker so he can beat him to the point of attack (blue line). To make matters even worse for Stanley, the linebacker is shaded inside of him pre-snap and therefore has an advantage before the play even starts.

If Stanley does make it through unimpeded, and can somehow win the foot race, he still has some work to do. If he finally gets in front of Robinson, he will have to stop all his momentum in an instant, turn back and seal the linebacker. The laws of physics suggest this might be difficult. In reality, the best chance  Stanley has is to hope that the linebacker over pursues so he can push him past the play as Bryant cuts back. 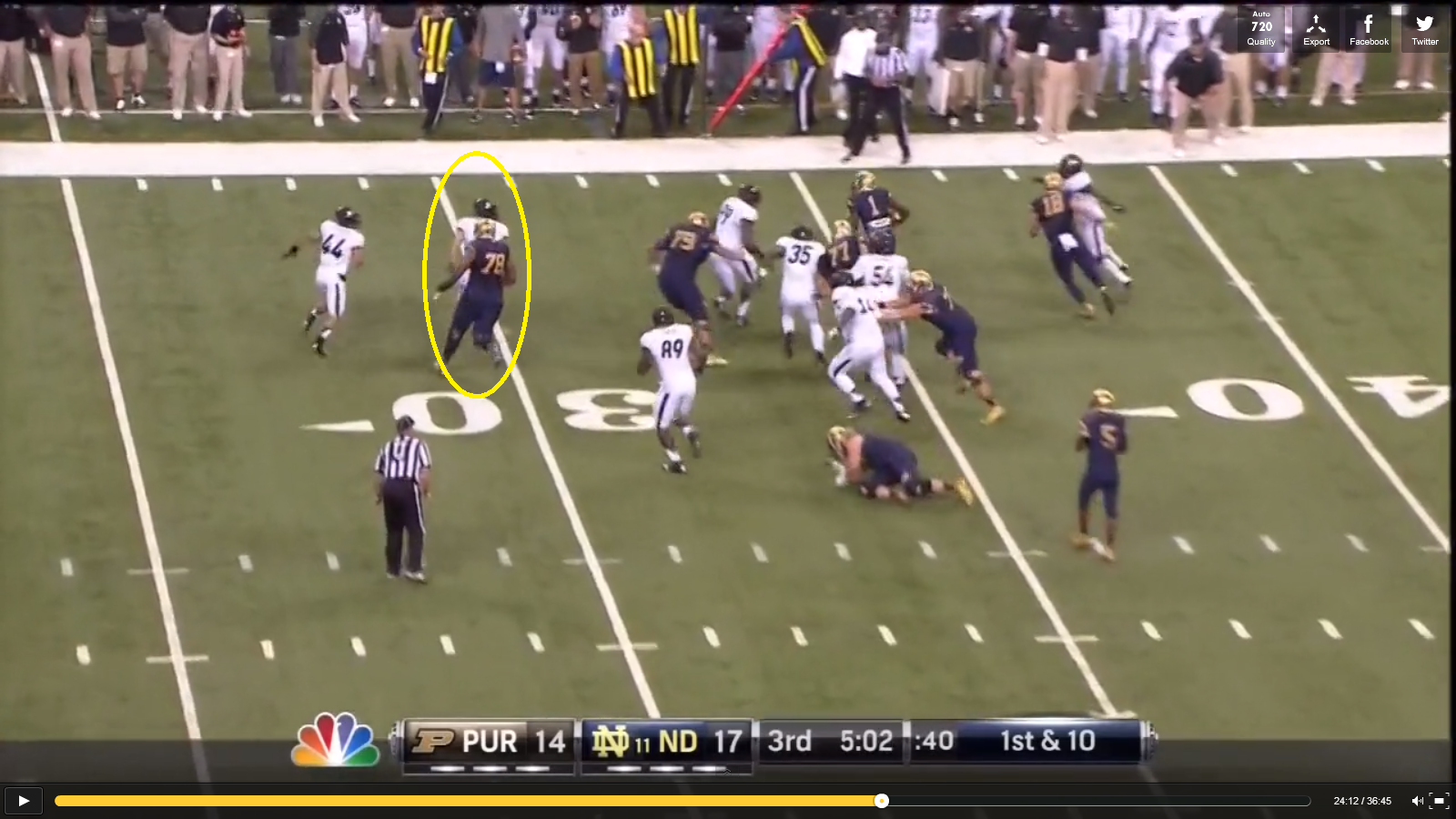 As you might have guessed Stanely never catches Robinson (yellow circle). But hey, at least he got in a nice run.

This isn't an isolated incident, it happened all night. Sean Robinson had a field day. He ended up with 10 tackles on the night with two tackles for loss. In the previous 2 games against directional schools, he had 11 tackles with none for a loss. For those of you who follow recruiting, it's worth noting that Robinson was a 3 star quarterback (yes you read that right, quarterback) coming out of high school. In fact, he played quarterback at Purdue in 2010 and was converted to linebacker in 2012. So why did a 3 star quarterback turned linebacker have such a great game against Notre Dame? Well, he had a pretty easy night for a D-1 linebacker.  His reads were simple (just follow the back) and in many cases no one blocked him.

Why is the scheme a problem?

Does this mean that Brian Kelly is an idiot and has forgotten how to coach? No. It does mean he has to go back to the drawing board from an X's and O's perspective. 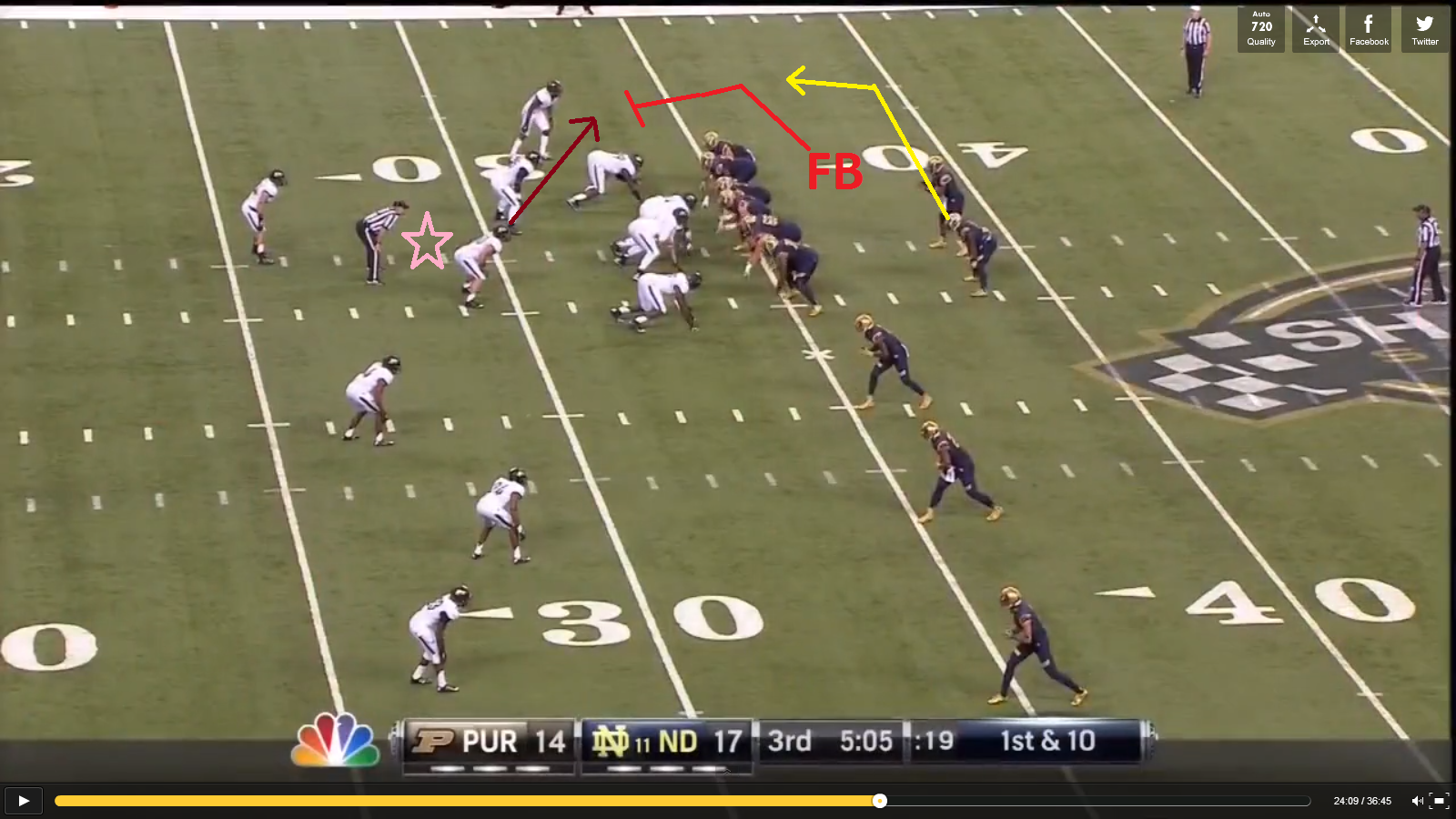 Many teams will use a lead blocker to take care of the free linebacker in this situation. As you can see, a fullback (red FB) would have a much better angle to seal the pursuing linebacker (pink star, crimson line).

In Brian Kelly's version of the spread offense, he doesn't typically use lead blockers. This means he has to find other ways to prevent defenders from flying to the point of attack. 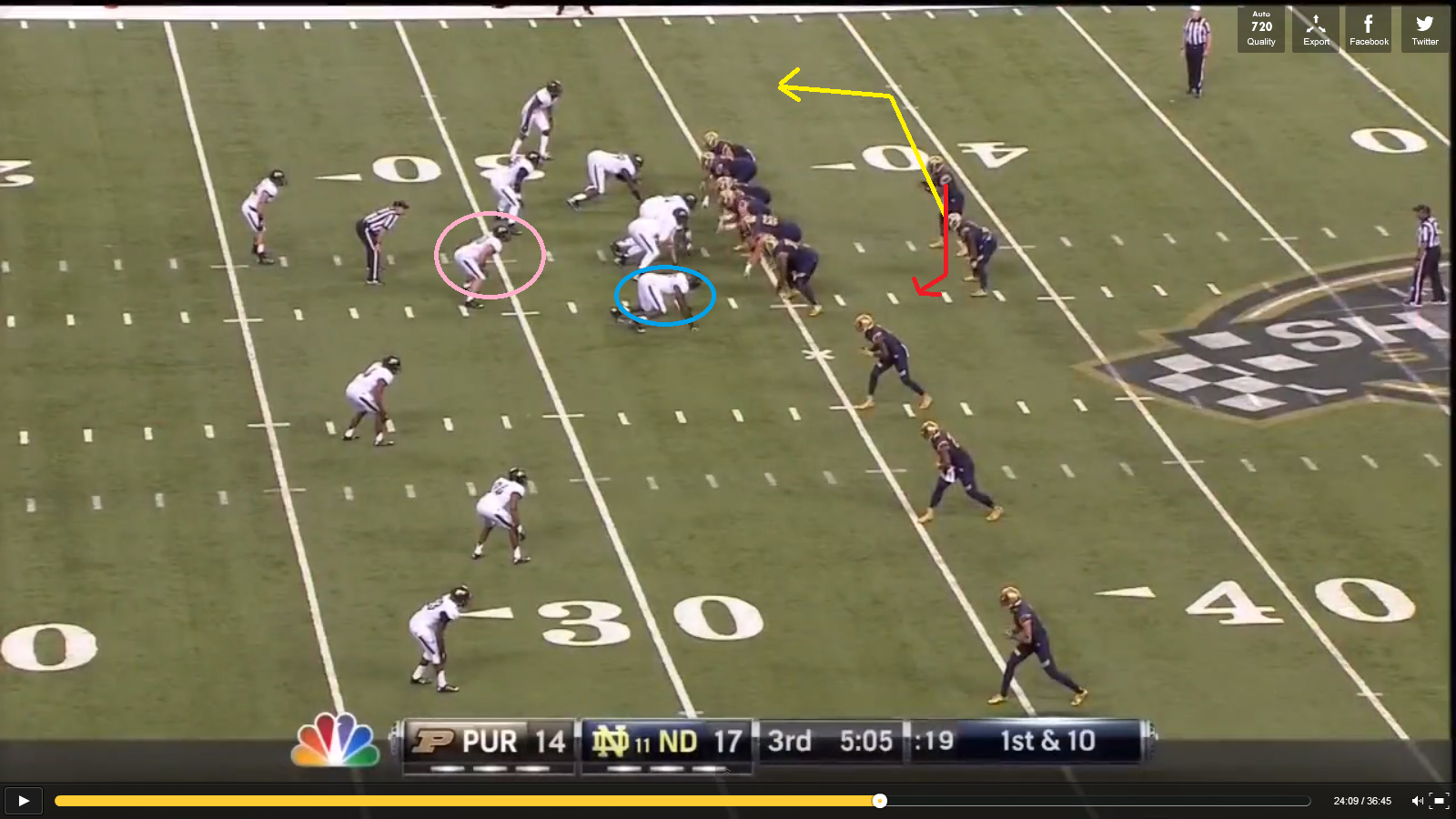 Spread offenses typically prevent backside defensive players from flying to the football with misdirection (a fly sweep fake) or running the zone read.

On this play, the defensive end (blue circle), should be occupied by the threat of Golson running (red line). The backside linebacker (pink circle) should at least be slowed down by this threat. If he is slowed, this would allow the tackle (Ronnie Stanley) to get in better position to make the block.

The problem for the Irish is that they don't have much misdirection in their offense and the quarterback keep on the zone read play isn't much of a threat. Coach Kelly understands that Everett Golson isn't great at running the zone read. More importantly, he doesn't want to expose Golson to the additional hits the zone read would create. Defensive coordinators have figured this out. As a result they are coaching their players not to worry about Golson on running plays. They are free to attack the running back.

As an aside, if I was coaching against the Irish I would do the same thing. I would be willing to concede that Golson might gain some yards by keeping the ball on zone reads, but... more carries for Golson = more opportunities to hit him. Golson is the catalyst for the Irish offense. If the opposition can wear him down physically, they stand a much better chance of slowing down Notre Dame's offense.

There are multiple problems with the Notre Dame run game. The two most glaring? Poor play by the offensive line and a flawed offensive scheme. Here are the results of these problems in picture form: 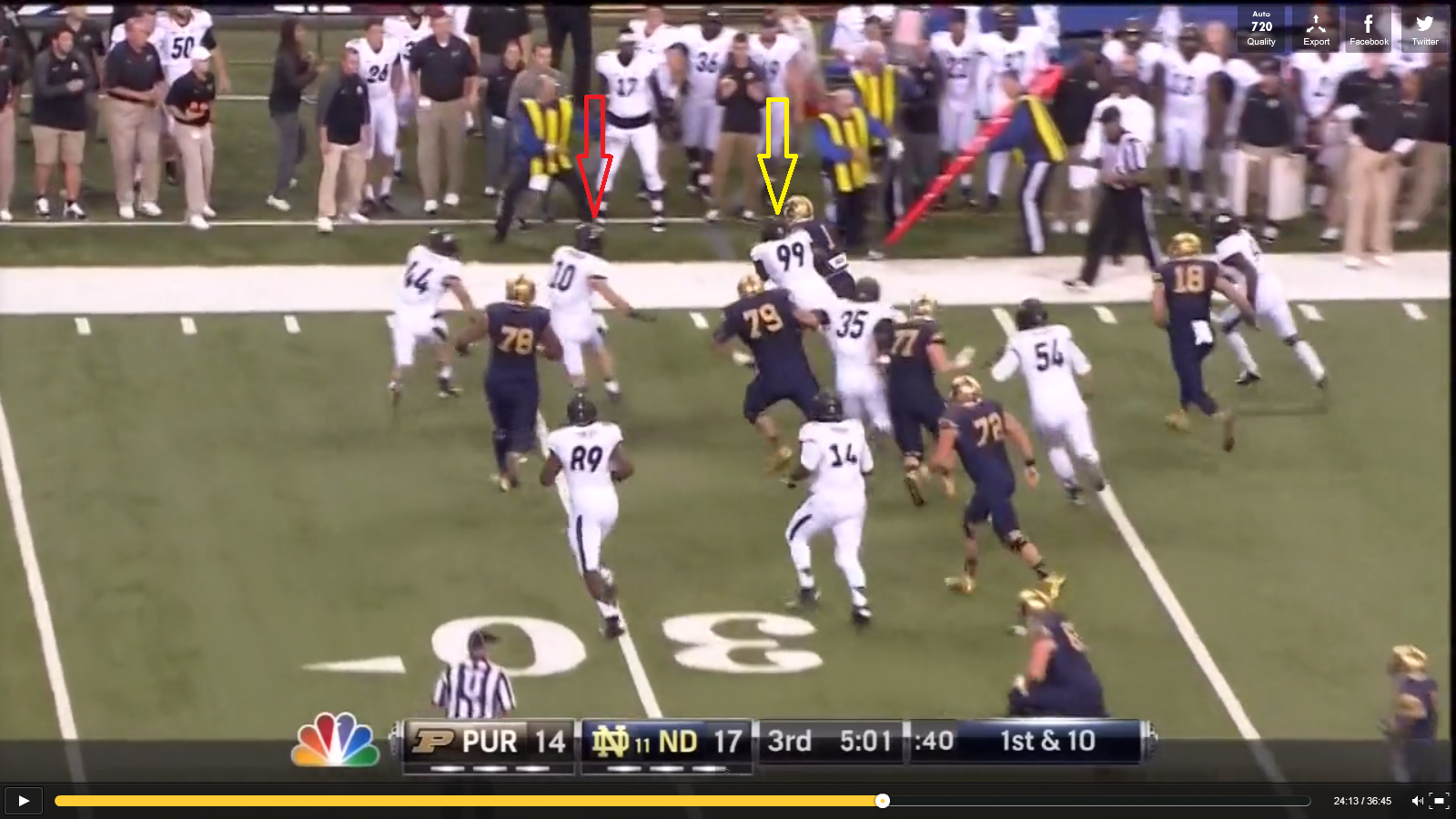 Fortunately, the Irish have some time to fix this problem. If they choose to ignore it... well, there's a lot of icebergs left on the schedule. And even unsinkable ships can sink.