Notre Dame won an unremarkable game against the Purdue Boilermakers in Indianapolis on Saturday.  This game featured some highs and many lows on special teams.  Let's take a look at what happened on Saturday.

Kyle took all 7 kickoffs on Saturday, booting 5 for touchbacks, 1 out of bounds, and 1 returned.  On the out of bounds kick, it really looks like there was a mishit on Kyle's part and the ball careened out of bounds.  Fortunately for the Irish, Purdue elected to take a knee and run out the half instead of taking advantage of the free field position.

Purdue's lone return came at the hands of starting RB Raheem Mostert for 33 yards.  This was good for Purdue and bad for the Irish.  How did it happen?

As with last season, Purdue sent one man back to fake a reverse kick return. Notre Dame's only reaction was one of the middle coverage men running to cover the reversing player.  Very disciplined.

Purdue created an effective hole, however this was bolstered by, in my biased opinion, a blatant block in the back that went uncalled.  Like with the long return from last week, this is difficult to analyze in light of the fact that a player who could have made a play was unable to do so because of the uncalled penalty.  What can be analyzed are fundamental mistakes; ND missed a tackle at the 25, allowing the return man to get an extra 5+ yards, the coverage team did not get downfield fast enough (most camped out at the 25 by the time he was at the 15), the lack of fighting off blocks faster, and lack of closing, though that could theoretically be blamed on the no-call penalty.

Assuming this call was not a penalty, ND needs to close this lane faster.  However, you can see multiple players camped at the 25, reacting to the return.  I will admit though, Cam McDaniel made a heck of a play on this return, taking an angle from the middle of the field and helping to make a tackle.  It helped that he was unblocked but that is precisely what the unblocked players need to do.

In a predicable result, Kyle missed his first early field goal attempt of the game and went perfect for the rest of it.  Brindza made field goals from 19, 48, and 39 yards, while his miss was from 50.  This makes it the second Shamrock Series game in a row where Kyle missed his first field goal attempt of the game.  I think this is likely due to adrenaline.  In the Michigan game, Brindza had multiple kickoffs, extra points, and 3+ quarters to relax before his field goal attempt.  In this game and against Rice, his missed attempts were early.  I think, going forward, that he just needs to take a deep breath and relax out there.

Kyle took all 4 punts for the Irish, booting them for 193 yards, an average of 48.2 yards per punt. He had a long of 52, 2 inside the 20, and a fantastic 0 touchbacks. Two of the punts were returned. One was returned by Frankie Williams for 17 yards and the other by Danny Anthrop for 7. While the 17 yard return against the Irish was the worst return given up by the team this season, Kyle still ended up with a respectable 42.2 yard net.

The 17 yard return by Frankie Williams was the worst return allowed by the Irish this season, let's take a look and see what went wrong. 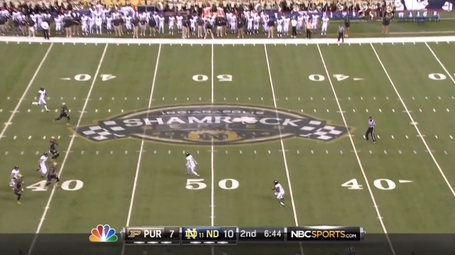 Kyle outkicked his coverage here, as the closest defenders are more than 10 yards from Williams. Notre Dame had the ball inside the 5 yard line and Kyle was standing in the back of the endzone for this punt. Williams caught this ball on the Purdue 45, meaning Kyle booted it a very respectful 65 yards in the air. However, he had a lot of room to move. 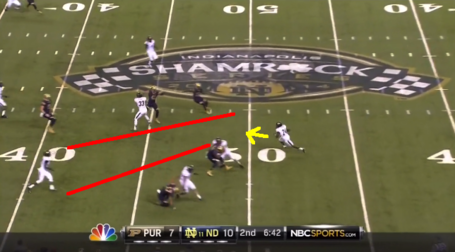 And because Williams and the Purdue return team had so much room to work, Williams had himself a hole.  If there is any positive, it is that ND's coverage team limited Williams to the left side of the field and did not allow him to run around them--they made him run through them. 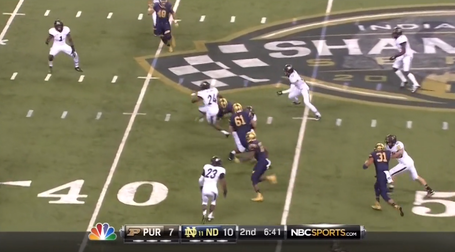 And here, Scott Daly forced Williams right into Mathias Farley, who did a fantastic job at making an open-field tackle here. So how did Purdue achieve this? First was the outkicking of the coverage and room to run, with solid blocks.  That said, ND should be commended for closing as fast as possible and limiting a massive return.  However, this type of play cannot happen against Switzer from UNC or Agholor from Southern Cal or Montgomery from Stanford.  Those return men will eat Notre Dame alive if they are given this much room to move.  Brindza not only needs to boot the ball far, but get decent hangtime.  Likewise, the coverage team needs to fight off these blocks better and close the lanes.  ND also should limit these tight, endzone punts where the punter has no room to move and the coverage team is much closer to the kick.  Because the kick happened so close to the coverage team, the coverage team lost crucial yards to get downfield.

For the huge strides that Notre Dame made in the punt return game this season, they took a huge step back in this game.  Thomas Meadows took all of Purdue's punts this game, booting 4 for 170 yards, an average of 42.5.  His long was 48 and had 1 inside the 20.  Cody Riggs only managed to return 1 of these for -5 yards.  How did this happen?  One picture tells a thousand words: 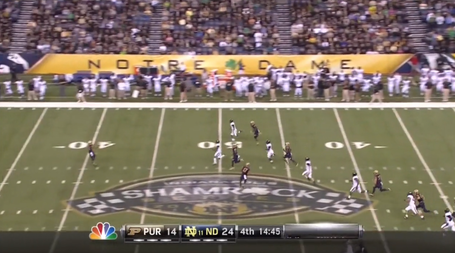 The ball is in flight at this point, but at the top of the screen (Devin Butler) and middle of the screen at the 50 (Mathias Farley), both Purdue coverage men beat their respective blockers.  If Riggs sees this, he has GOT to fair catch this ball.  He is going to get injured if he keeps forcing returns.  In this case, he lost 5 yards by not fair-catching this ball.

Arguably the best performing unit on Saturday was the kick return unit.  Yes, Amir had a poor return, however his 47 yard return was the longest of the season and one of the longest of Brian Kelly's tenure.  Amir Carlisle took 2 returns for 57 yards, returning the opening kickoff of the game for 47 yards.  The 10 yard return was very poor but the 47 yarder cannot be overlooked.  After Amir's injury, Greg Bryant stepped in and returned 1 kick for a very respectable 29 yards.  The 47 yard return had me standing on the couch, screaming at the television, so let's break it down.  NBC gave us multiple views of this that you can see in the video above, however I will use the rear camera because you can better see the lanes this way. 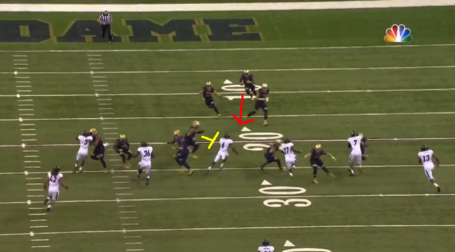 This was a very short kickoff, with Amir catching this ball at the 8 yard line.  Several members of the return team (Justin Utupo in particular) are making looping motions and cracking on the coverage team. 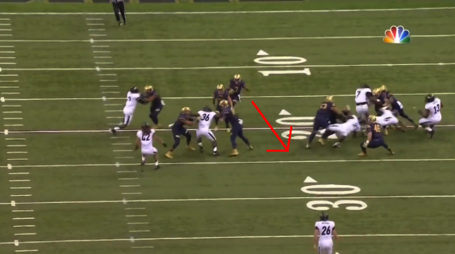 And with the block of the year, Justin Utupo knocked two Purdue coverage men off their feet and to the ground. Amir has clear sailing. 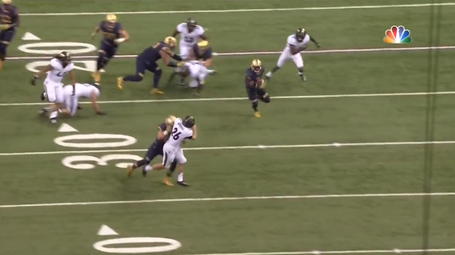 I want you to go back and look at the replay for this.  Greer Martini made a textbook play; he saw Carlisle coming, knew he was not blocking anyone, and turned around and found a man, in this case the kicker Ian MacDougall.  Amir made a break for the sidelines. 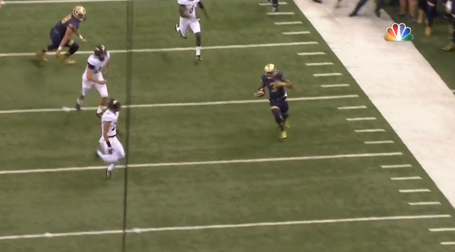 Amir's one mistake on this return was slowing down to deal with this guy.  He should have lowered his head and took a hit if one was coming.  Instead, the former RB in him came out and he stuttered just a bit, slowing his momentum, and going out of bounds.  At the end of this, ND would go on to score 6 plays later, seemingly on the way to a massive victory that never transpired as we thought it would.

With the Bye Week upon us, I will have a Special Teams Preview of Syracuse next week.  Any questions or concerns, please feel free to comment below.