OFD presents Brian VanGorder: The Only Man Who Can Get Excited About Purdue

I don't think it's any secret that year in and year out, Purdue manages to send our blood pressure through the roof by coming out and playing their best game of the season. Year after year, they manage to keep the game close far longer than it should be, thus causing Notre Dame fans around the world to collectively groan and reach for the aspirin. So this year would be no different, right?

On a Saturday where overcats were falling to underdogs with the frequency of...something that's really frequent (i.e. not Michigan scoring on Notre Dame, haha), the Irish managed to continue their 2014 Rivalry Farewell Tour with an unblemished record via a hard-fought 30-14 win. Sure, we crack all kinds of jokes about how boring it is to watch PurduZZZZZZZZZZzzz [sorry], but you know who wasn't bored with this game? 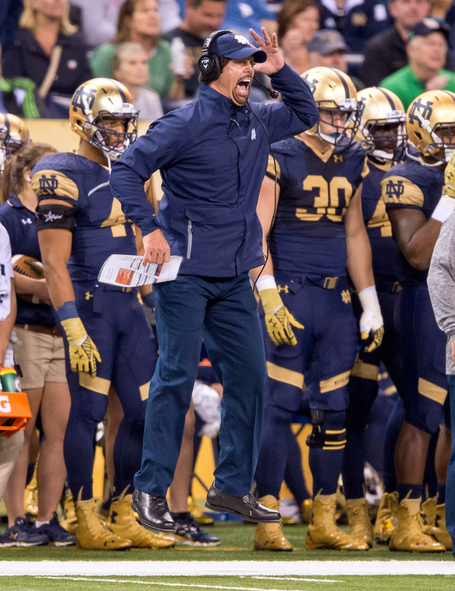 Yup, that guy. There few men on this earth who can manage to display that much exuberance when in the dementor-esque presence of the squad from West Lafayette, but Coach Brian VanHalen--er, VanGorder--is one of those men. Some say that whenever he pats a player on the head, that fortunate fellow spontaneously sprouts a beard and feels the urge to blast 80's rock in the locker room. Others say that that's a complete lie--everyone knows that those players blast 70's rock.

Anyways, here we have Brian VanByNight VanJovi getting all animated on the sidelines during last week's Shamrock Series game. As always, share as many captions, photoshops, GIFs, and whatever else you can think of in the comments below to capture the essence of this photo. Happy captioning! 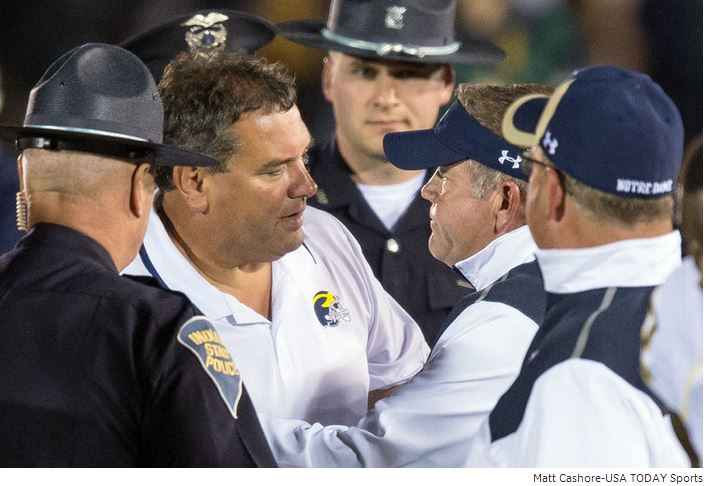 Hoo boy. Riding the tidal wave of good feels generated by the 3(7/1)-0 jimmy-rustling of Michigan, last week's Trick Shot Wednesday was awash in a sea of hilarious captions that were eagerly green'd by the jubilant Commentariat. Thanks to that happiness, there were an amazing amount of great entries to choose from...however, even posts with more than a dozen rec's did not necessarily crack the top three. Here they are, in reverse order:

--In third place was saxattack29, who needs to start showing his ugly mug around here more often if he's dropping gems like these:

--And in first place, OFD was treated to a rare 1-2 combo wherein respected OFD elder statesman CubsFanSince1957 fed us a great little lipreading nugget, which CleverScreenName (who is like CFS1957's Dagobah swamp Force ghost opposite thing) promptly crushed out of the park. 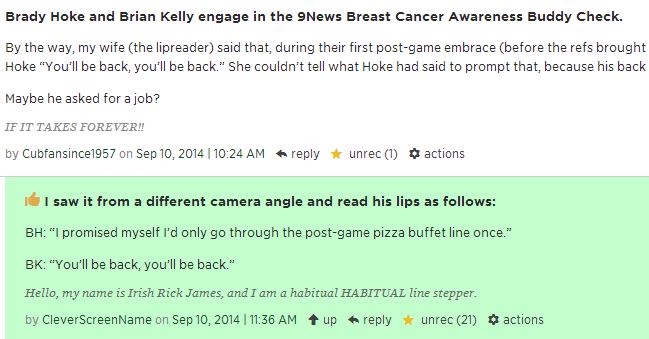 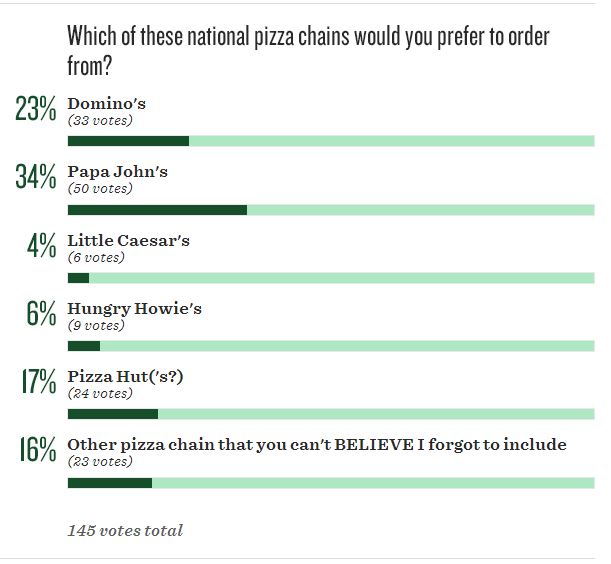