We take a look at Max Redfield's first career INT, and the evolution of the defense under Brian VanGorder

Share All sharing options for: OFD Films: BVG and the Overload Zone Blitz

Earlier this week, Burgs broke down an all-out blitz that resulted in a sack on Devin Gardner. In an effort to better describe the breadth of new defensive coordinator Brian VanGorder's scheme to know what to look for the rest of the season, we are going to take a look at another type of blitz. This play didn't result in a sack, but did force Gardner into a poor decision that resulted in a Max Redfield interception. Let's take a look at another tool in Brian VanGorder's toolbox, the overload zone blitz.

The overload zone blitz differs from a "usual" blitz in that the goal is to outnumber one blocker while still only rushing 4 or 5 players. This allows a defense to play a standard zone coverage scheme while still generating pressure against the QB. All of the reward with MUCH less risk than standard blitzes which require tight man-on-man coverage in order to bring extra rushers. By using the fact that 3v2 is just as effective as 6v5, zone blitzes really offer a "safe" way to bring the heat against opposing QBs. Most every zone blitz is an "overload" blitz, where the defense looks to "overload" one side of the line, or in some cases, one specific blocker. This is done in order to generate a free rusher who can then hit the quarterback. Now that we have the basics, let's take a look at the play in action, and the wrinkles Brian VanGorder used to make it successful.

We have seen a penchant from VanGorder to bring the heat on third and long so far this season, and this play is no different: it is 3rd and 7 from Michigan's own 39 on the Wolverines' first drive of the second half. Here is a look at how the teams lined up: 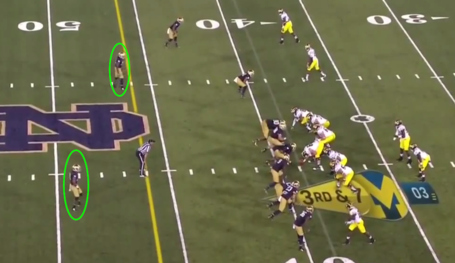 Michigan comes out in a shotgun set with trips to the right side of the field, and the Irish have subbed into a 3-3-5 nickel package. Notre Dame immediately shows pressure with all 3 linebackers and Matthias Farley in the slot playing up at the line of scrimmage. This look is often called (somewhat loosely) a bear or eagle front -- you will often see this in the NFL with every player standing up in what is often called the "amoeba" front. BVG has made a point here of telling his players to confuse Michigan's protection by showing pressure from all angles. If you don't know where the overload is going to come, it's pretty difficult to adjust your protection towards the blitz. Also important to note is ND showing two high safeties before the snap.

Now, let's take a look at what actually happened on this play:

So why did Gardner make the throw he did, directly to Redfield? There were two components to this play, as with any zone blitz -- the pressure itself and the coverage behind it. Let's first take a look at the defensive and offensive playcalls and how they line up with each other: 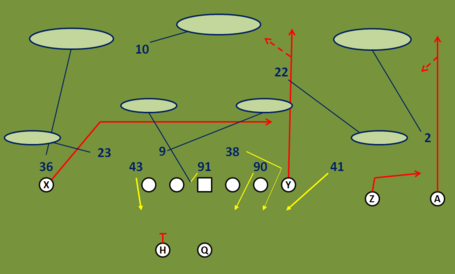 The first component of the success of this play is the pressure that was created by the overload blitz on the strong side of Michigan's line. This overload is targeted at the right tackle -- the Irish are sending three players (Schmidt, Rochell, Farley) after the QB against only two blockers for the Wolverines (assuming the TE goes out for a pass on 3rd and 7, a safe assumption), the guard and tackle. Isaac Rochell shoots inwards, hoping to occupy both the tackle and the guard as Joe Schmidt stunts around him towards the QB. In an ideal world, both Schmidt and Farley would then be free on the QB, but here the tackle makes a nice play and picks up Schmidt. The problem is then Farley, who is running free on the QB. The one tackle can't block both players. Farley puts an immense amount of pressure onto Gardner despite being blocked by the running back (which is a VERY good pickup on his part), forcing the throw.

The second part of this play's success is the coverage behind the blitz. The Irish are running a Cover 3 defense for this play. The underneath zone players include Sheldon Day - this is a hallmark of zone blitzes, sending defensive linemen back into coverage - and Jaylon Smith. An interesting wrinkle here from BVG is sending the slower player, Day, to the boundary side hook zone, while Smith is tasked with traveling a greater distance to cover more space on the field side hook zone. This is something to keep an eye on as the season progresses, the interesting ways Jaylon Smith is used, as he has the ability to cover enough ground to make just about any scheme a possibility.

Behind the underneath zones is what makes this play truly a great one. Remember how the Irish lined up with two high safeties pre-snap? Post snap, the Irish roll Elijah Shumate down to the flat and play cover 3 behind with Max Redfield playing the deep middle third of the field. The important route in this play will be run by Michigan's tight end. He is running a seam route, which is actually quite good against Cover 3 zones. Here, we see the tight end working up the seam and actually angling away from Redfield:

The pass to be made here by Gardner, if he is going to throw to the tight end is to his outside shoulder, away from Redfield (he could also have thrown to Funchess, who was breaking off his route to the outside). Instead, the pressure of Farley, along with his pre-snap read of 2 high safeties makes him think the middle of the field is the area that is actually open and he throws the ball to the inside, incorrect, shoulder:

The rest is academic, as Redfield steps in front of the route and makes the easy interception. This play was a good route by the tight end, a great pickup by the Michigan running back, a great blitz and coverage design by Notre Dame, and a bad throw caused by the pressure from Brian VanGorder's zone blitz.

This play, more than most, illustrates the difference between Brian VanGorder and Bob Diaco.  Diaco often played a "get lined up in the right spot and then execute" which allowed many offenses (*cough*Alabama*cough*) to know exactly what type of coverage was being played. While effective in its own way, it became simple for opposing offenses and quarterbacks to avoid big mistakes against the Irish. VanGorder takes a different tack, bringing pressure and showing different looks pre- and post-snap, to put the opposing quarterback to the test. It should be exciting as the season goes on to see what other tricks BVG has up his sleeve to cause some big plays on the defensive side of the ball.